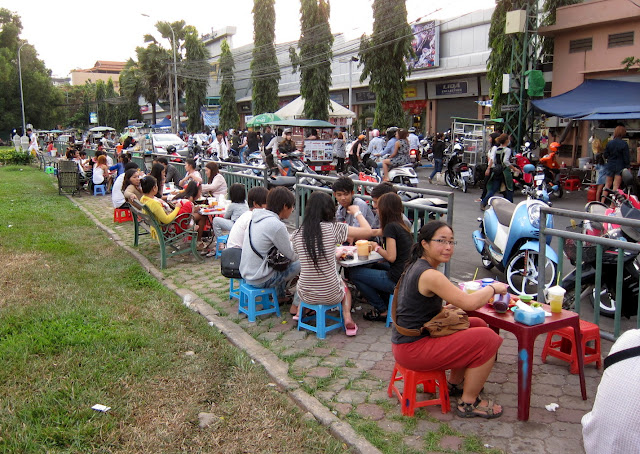 Since we were moving so fast on our South East Asia trip, my brother and I never really have the time to learn what the local dishes are called. But we do love street food.

Faced with an intelligible menu (or worse – no menu), what to do? 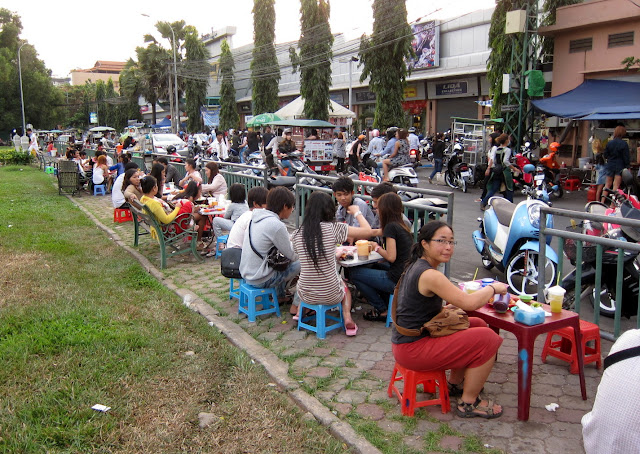 A popular street food scene in Phnom Penh is fried ‘stuff-on-a-skewer’. In the evening, students and workers alike order these by the basketful and eat them sitting on little stools by little tables on the sidewalk. The ‘stuff’ can be anything: meatballs, imitation crab, sausage, tofu, etc. They’re all bite-sized. You point to what you want, and they’ll fry it on the spot.

Perfect! No menu needed and let the finger do the talking!

I sent out my brother (or more like his finger) to choose. When our plate arrived, there was something a little off about the meatballs on it.

‘I don’t know’ – my brother shrugged after taking a closer look. ‘I don’t think I ordered that’. I got my head close and poked around with my chopstick trying to figure out the stuffing inside. Certain features became clear. Rather unfortunately. Features that resembled too much like… Oh geez! That was when I noticed there are some wet, black feathers stuck in my chopstick.

Now in an alternate universe, I’d squeal with delight, stuff the thing in my mouth, and say things like

‘Oh boy’ – crunch, crunch – ‘I’ve always wanted to eat a balut, a fertilized chicken egg with a fully-formed chicken embryo inside. What a local delicacy! What a treat!’

In this universe, that would never happen.

I’d jump off planes and bridges – but when it comes to adventurous eating, I’m a big chicken (no pun intended). I especially have a thing about eating whole animals… well, whole. No oysters or soft-shell crabs for me. Definitely no chick embryos that already have feathers on them.

So, in this universe, the only squealing I did was to ask my brother to get the balut pieces off the plate. And oh – can I get another pair of chopsticks, please?

There are certain things that still don’t sound good enough to eat – even deep fried.

So, if you’re in Phnom Penh – join the locals on their evening stuff-on-a-stick venture (the stretch in front of Pencil Supermarket between Street 258 and 266 seems to be popular) – just keep an eye out for these baluts. Of course, what you do after you spot them is up to you.

So I wonder – is ‘balut’ vegetarian?