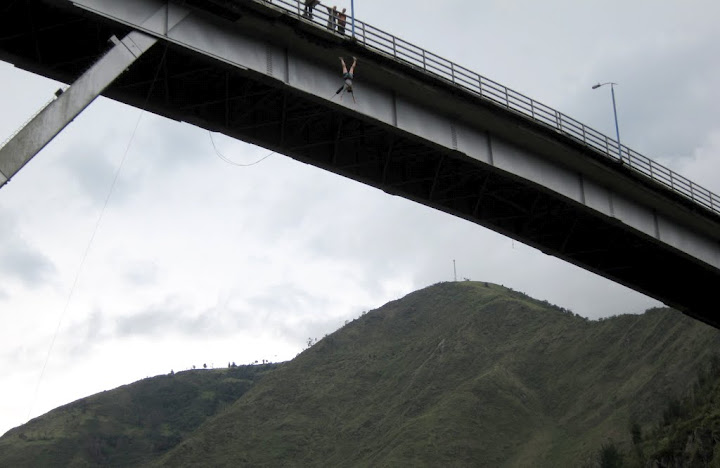 Baños is known as Ecuador’s center of extreme adventure activities. You can do anything here as long as it involves climbing up stuff and falling down stuff. And if it involves water and volcanoes, it’s even better. We felt right at home there.

Here are some of the things we did that we’ve survived: 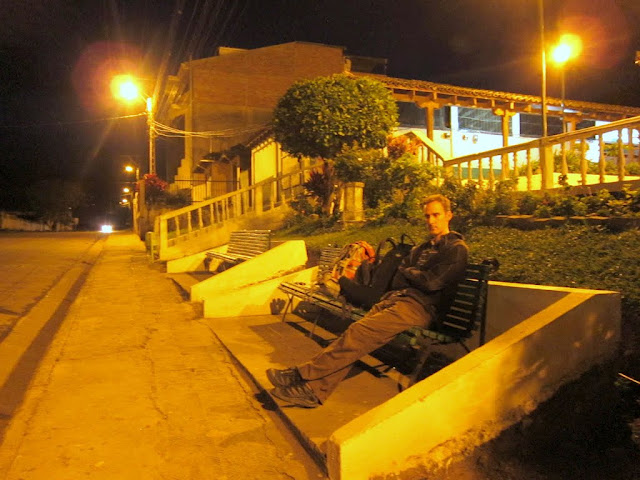 “Hope you’re up for an adventure,” I said to Jack.

“Not really”, he grimaced.

“I just hope it won’t rain. Then it would really suck. Lots of dirt road.”

It was 6 am in Vilcabamba. It was the start of a 2 day journey to cross from Ecuador to Peru, the 3rd country in our RTW trip. 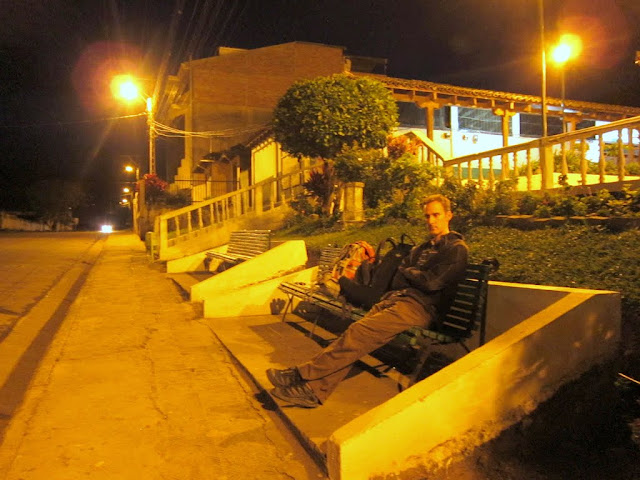 Jack, not looking too happy at 6 in the morning - Vilcabamba

Well, 2 reasons:
1. La Balsa is supposed to be the more relaxed of the three (and safest, and most scenic). Border crossings make me nervous. My Indonesian passport has thrown more than one curveballs in the past.
2. It looks good on the map. We were in Vilcabamba, and we’re going to Chachapoyas. Looking at the map, it just makes sense.

We could backtrack to Loja (Ec) and bus it all the way to Trujillo (Peru), the bus will even wait for you at the border. But what’s the fun in that?

So in case you’re curious, or

If you’re looking into crossing the Ecuador – Peru through La Balsa, here’s how to do it in 7 (sort of) easy steps:

In Ecuador
1. Get yourself to Vilcabamba
2. Vilcabamba – Zumba by bus
3. Zumba – La Balsa by ranchera

If you leave at 6:30 at Vilcabamba, you should be able to get to Chachas by late afternoon or early evening – depending on how crazy your driver is. Read more below…

Vilcabamba – Zumba: It should’ve been straightforward

Sur Oriente has a 6:30 am bus that will take you to Zumba.

About halfway to Zumba, we had to wait for 1.5 hr due to road construction. Pretty much in the middle of nowhere.

I made friends with the kids on the bus while waiting. As they were leaving, they took a picture of me with their cellphone. It made me feel a little bit like both a celebrity and a freakshow. Stuck in the middle of nowhere

We only passed one small town on this 5 hour journey and for the rest of the time it was just us, fog covered mountains and trees, and a very deserted dirt road.

One important tip: Bring food and water on this journey. We were counting on the street vendors who usually board the bus to sell snacks and water, but the road is so remote that nobody came to sell anything. We also missed our breakfast stop. We didn’t eat until way past 1 o’clock when we got to Zumba.

We got to Zumba around 1:40 and we were starving. There are some stands selling almuerzos (set lunches) around the bus terminal in Zumba. Yay for that!

The last ranchera (open sided truck) to leave for La Balsa was at 2:30 pm. So we got there just in time. 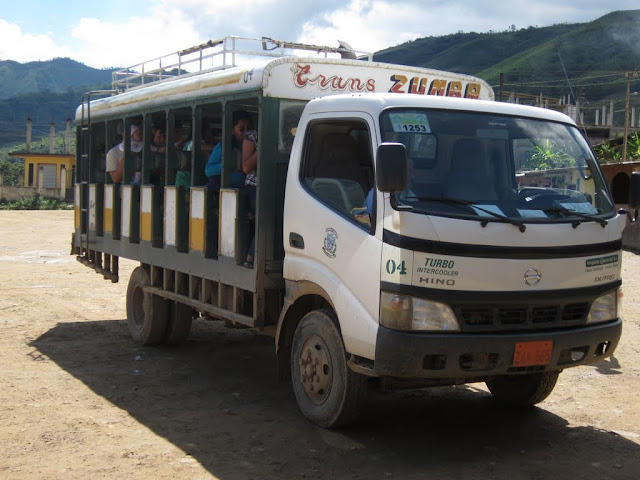 The road was so bumpy – and dusty.

After a particularly rough bump, the seat we were on came loose and we ended up on our butt on the floor. So glad I had my computer bag strapped or else it might’ve fallen off. Phew! 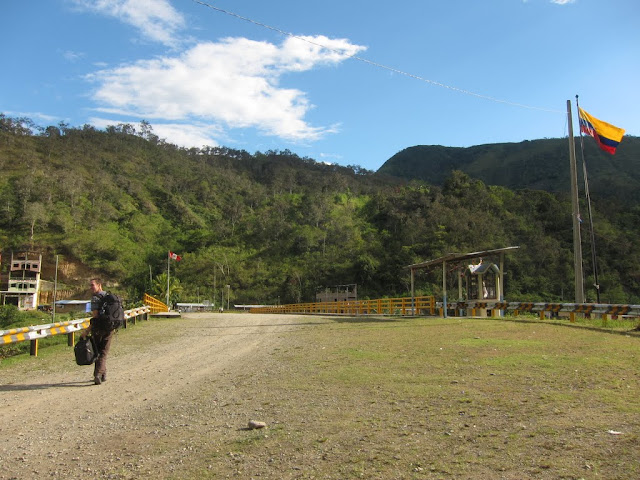 The immigration offices on both sides were mere shacks on the side of the street. We got stamped out of Ecuador (and I reminded the guy not to forget to put us in the system), and stamped in into Peru.

The whole thing was a pretty painless process. Although the guy did have to pull out a document to confirm that yes, Indonesian passport holders do NOT need visa to enter Peru.

We and another couple were the only foreigners there. It was hot and humid. And we were getting hungry again. We ate some crackers and horrible chocolate bars (first time I realised that yes, you can have horrible chocolate) since the restaurants didn’t really have any food to sell.

Did I mention that you should pack food if you’re thinking of going to La Balsa?

Important tip: Exchange money here at the border. When we got to San Ignacio it was already too late to go to a bank and apparently there isn’t an ATM around?

We’re in Peru. High fives everyone!

We took a collective out of La Balsa. In the beginning there were just the four of us, the gringos, plus the driver. Then we picked up 4 more.

So yes, apparently you can fit 9 people in a 4 door sedan. It was incredible! 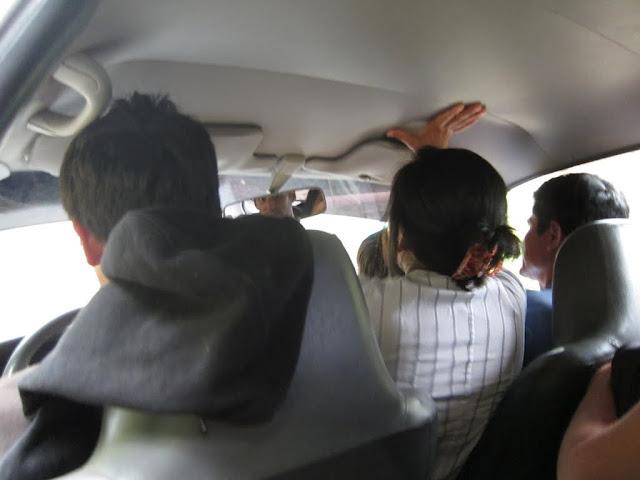 We got dropped off around 6 pm in front of a dark and non-descript building that’s missing part of its wall. The driver goes, ‘That’s La Posada – your hotel’.

We were like, ‘Yeah, right. You’re dropping us off at your friend’s house.’

But no, it turned out to be a hotel alright, albeit one without a front wall. At this point, any clean-looking beds will do. So we forked out 35 soles for a room and slept a very noisy sleep.

We left at 7 in the morning, before any restaurants (or banks) was open.

This stretch was the least eventful of them all. We convinced the driver not to take on anymore passengers so we rode in relative comfort all the way to Jaen. 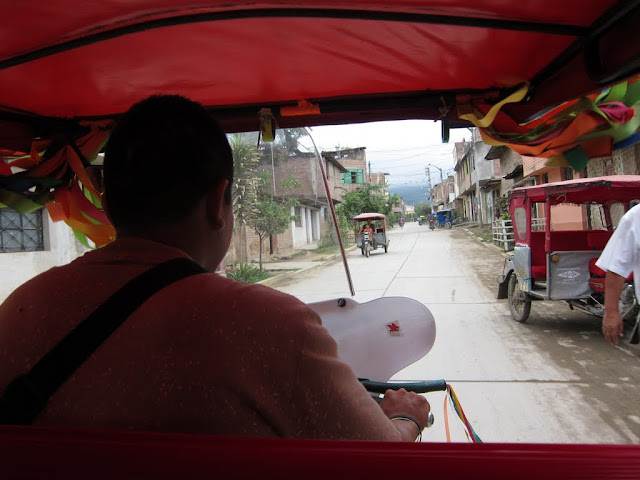 Here in Jaen was our first opportunity to stop at an ATM to get some Peruvian soles.

He definitely made the trip, that guy. 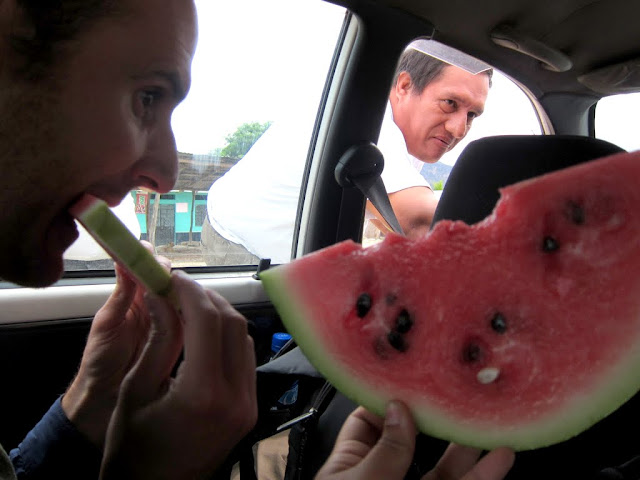 Along the way, he insisted in buying us watermelons. Somehow he believed that we had never had watermelons in our life before.

He also believes that, unlike his cheating and womanizing fellow Peruvians:

Yep. It was definitely more entertaining than the radio.

On the way to Bagua Grande, we finally hit asphalt again.

The stretch was the scariest ride all 4 of us ever had in our lives.

Jack saw the signs before any of us: dented sides, cracked windows, bald tires. We piled in anyway, all 4 of us. Then we picked up 2 more passengers.

7 people in a sedan.

Then the driver looked at us and winked, ‘Want to see a trick? I can do this drive in half the time.’

Well, he didn’t really say that, but if he had…

The trick would’ve been: Always drive at least twice the speed limit. Drive on the wrong side of the road half the time. Play ‘chicken’ with the other drivers. Ignore your whimpering passengers.

Almost 48 hours after Vilcabamba, we got out in Chachapoyas around 4 pm, pale and shaky. My hands were white from clinging onto the seat.

We never felt more grateful to be alive.

But it all ends well…

Chachapoyas turns out to be a delightful little town that reminds me so much of a Colombian pueblo. So it all ends well in the end.

This was definitely the longest and most adventurous border crossing trip we’ve ever taken. Some afterthoughts include:
1. Bring snacks and food. Can’t seem to say this often enough.
2. We’re so lucky the weather cooperates. It it had been raining, it would’ve been muddier, dirtier, and a lot more dangerous.
3. We’re lucky to have bumped into the Swiss couple that we ended up sharing our collectivos with. Strength in numbers can never be truer during any border crossings.

And I guess this post officially marks the end our adventures in Ecuador. I’m curious to see what Peru has in store for us

If it’s anything like the first couple of days, it should be interesting. 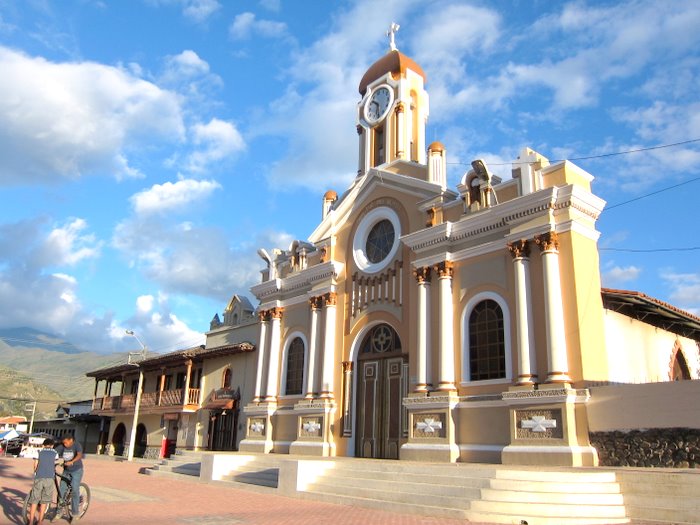 Apparently they all ended up here in Vilcabamba.

I’ve never seen so many old people and tie dye-clad people – sometimes they’re the ones and the same – since… Well, never, actually.

Vilcabamba is experiencing some sort of gringo boom, it seems like. It’s especially popular with the retired folks. We came to Vilcabamba on our way to Peru from Baños. We didn’t really know what to expect – but surely we didn’t expect a town overrun with expats and tourists. 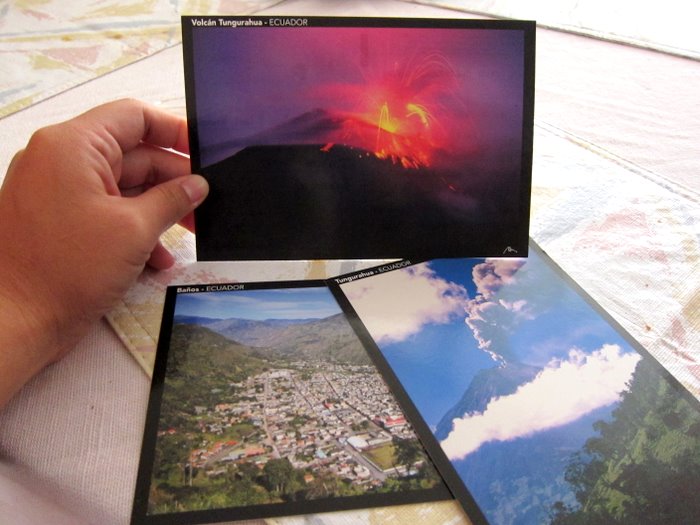 Baños is located at the bottom of a still very much active volcano, Tungurahua. So active that it’s constantly spewing smokes. It definitely makes life exciting. 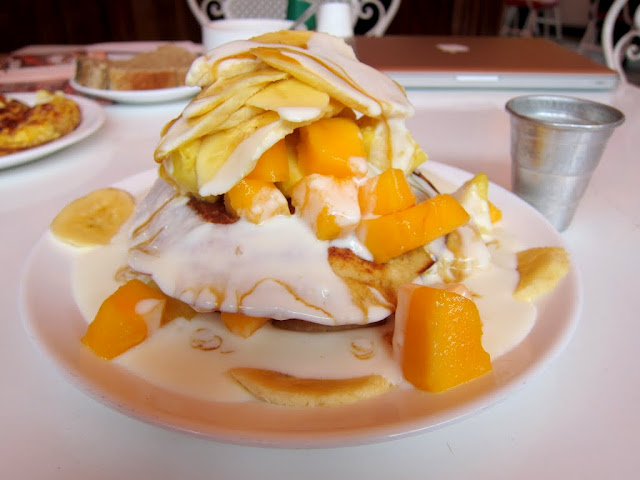 The Best of Baños

Having stayed in Baños for almost 2 months, both Jack and I have discovered some places that quickly became our favorites. We’d love to share some of them with you.

When we’re not working or partying, we’re jumping off bridges. There’s this bridge in Banos called San Francisco, which is the longest, tallest bridge in town. Go to the bridge at any given time and you’ll find a couple of guys hanging out offering a chance to swing jump off the bridge. 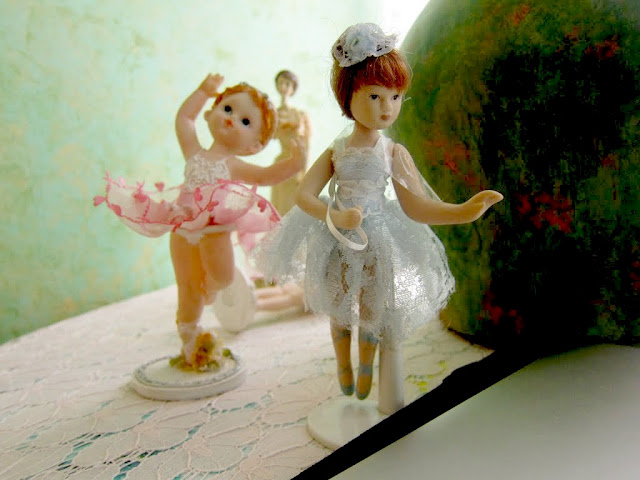 Taking A Break From Hostel Living – Come See Our $7 Apartment

We stumbled across this apartment when we were trying to help our friends, Miin and Neil, to find an apartment here in Baños.

The guy quoted us $25 per person per week to this 3 br apartment right in the center of the city.

(You should’ve seen the face of the wife when she found out – she knew she could’ve charged us more.)

It comes with cable TV, free WiFi, and hot water. And we even have hot water in the kitchen – the first we’ve ever had in South America. 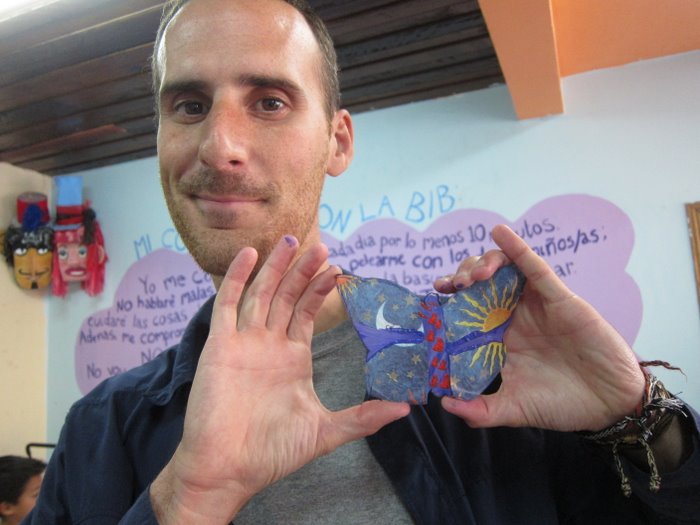 What happens when you hand 30 kids soda bottles 3 days in a row? Fun creatures is what happens.

All of the stuff below were made during activity time at the Foundation in Baños – where we spent 3 weeks working with local kids and teaching English to adults. 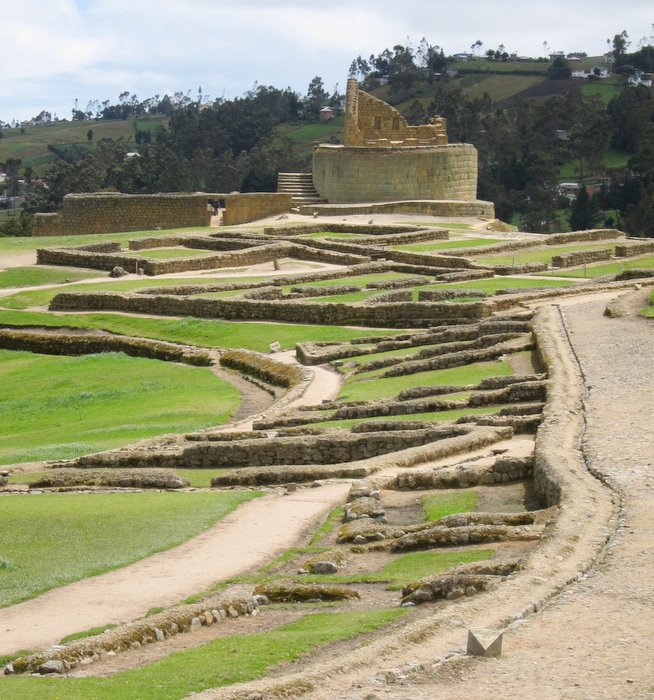 Ingapirca, Not Quite Blown Away

In case you’re curious, we’re still in Baños, Ecuador at the moment. We’ve been here for 5 weeks. Don’t worry, the end of this week we’re really, this time for real, going to move on.

A couple of weeks ago, I left Jack behind in Baños while a girlfriend and I made a weekend trip to Cuenca.

On the agenda: girls-only time and visiting Ingapirca.

Unfortunately, for my first Inca ruin ever, Ingapirca turned out to be only mildly entertaining. 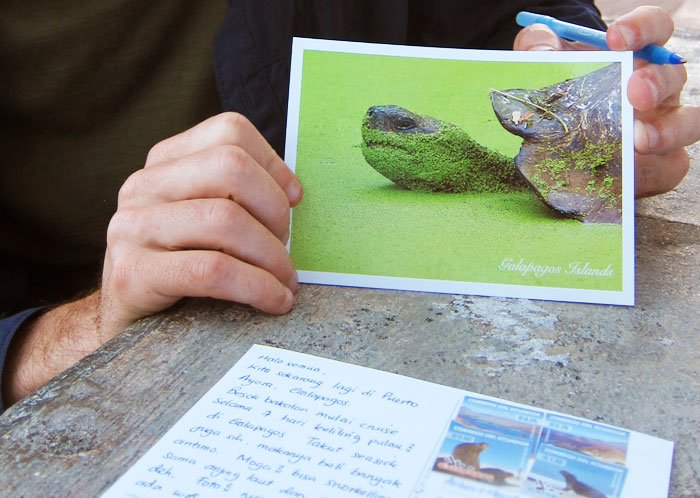 We had a plan to send postcards to our families back home from the places we’ve visited during our around the world trip. But not until Galapagos did we finally get a chance.

It was interestingly hard to come up with something to write about knowing there’s no ‘Ctrl-Z’ button to save us if we make a mistake. We couldn’t remember the last time either of us has written so much using pen and paper. 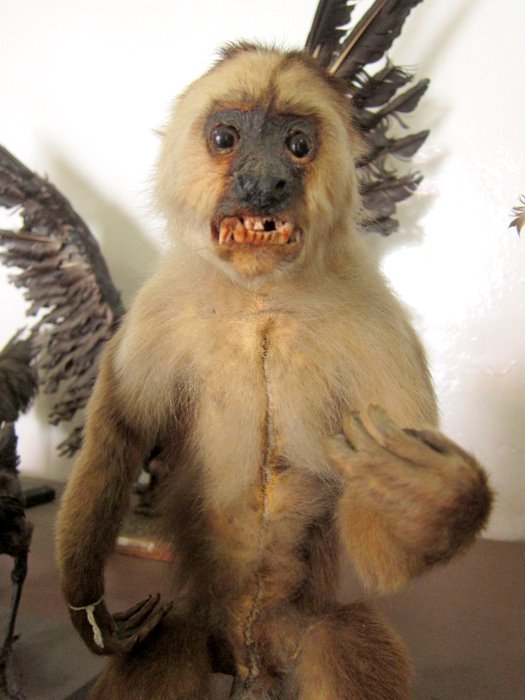 The Quirky Museum in Baños: The Dead and the Decaying

We’re on our last week here in Baños. It’s hard to believe that we’ve been here a month. It’s sad to think that soon we’ll be leaving our newfound friends behind and once again we’ll be facing the unknowns and the unexpected that our travel will bring.

We’ve spent our month here in Baños wisely, we think. We’ve volunteered our time working with the kids of Baños (more on this later) and both Jack and I have improved our Spanish by taking private lessons. We now know how to express our confusions in words other than mute blank stares (boo yah!).