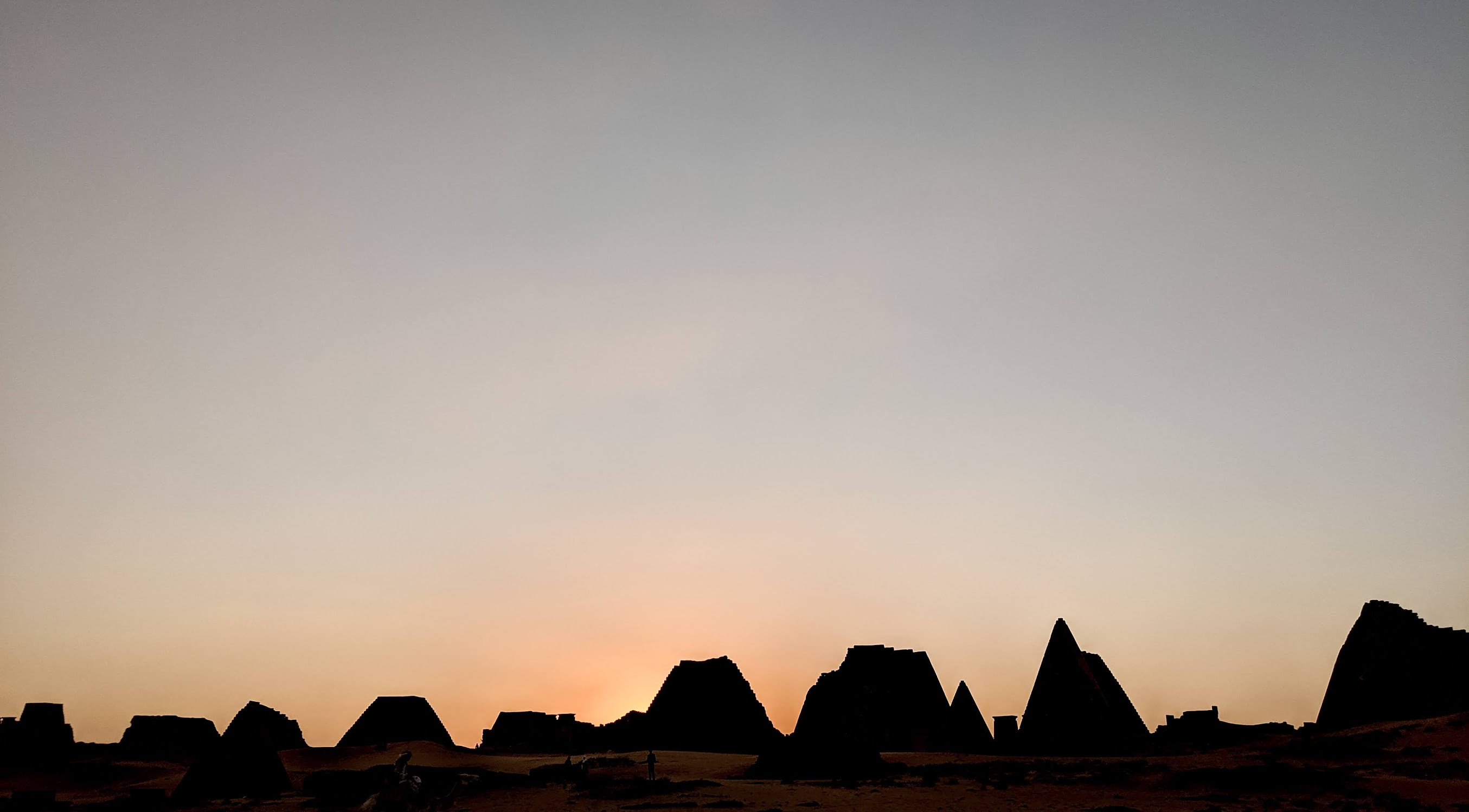 The pyramids of Meroe, Sudan

After 4 hour on the bus, I found myself standing next to a highway, on a dusty corner in a remote Sudanese town. I was the only female and the only foreigner. Local Sudanese men were staring at me, taxi drivers were trying to get my attention. “Someone is picking me up”, I waved them away. At least, I hope someone is.

Despite my somewhat unusual predicament, I was hiding a smile knowing instinctively that everything was going to turn out fine. I had no doubt even then that this was going to be one my favorite travel stories coming out of Sudan.

It all began when my Airbnb host in Khartoum heard that I was heading to Shendi to see the Meroe pyramids. One of his students happens to be from Shendi, he said. “I will ask her if you can stay with her.” 5 mins later, he texted back. “No problem. You can stay with her.”

One day before I was supposed to depart Khartoum, I got a text.

“A minor problem,” my host said. The student herself is not going to be in Shendi. No explanation was given. But not to worry he quickly added, “You can stay with her family.”

Mind you, I’d never met this student (nor my host who was abroad during my whole stay in Khartoum) and yet I’m going to stay with her family? Well, it’s either that or a hotel. The prospect of staying in some rural hotel in Sudan alone is so depressing it wasn’t a hard decision to make. I quickly agreed to stay with this family.

Later on that night, I started getting random phone calls and text messages. I assume this was my host family, or their relatives.

Whenever the person on the line sensed my confusion (and I was confused quite a bit – things were lost in translation), panic ensued on their end. They’d hang up or pass the phone to a different person. In the end, I was never sure who I was talking to or how many people I ended up talking with. One time I found myself texting with someone in French. A sister of this student, perhaps? I don’t even speak French!

It was a collective effort of a group of people – relatives of this mysterious student, I assume –  working together for a common goal: to get me, a complete stranger, from Khartoum to Shendi.

Through patches of information conveyed in the most ridiculous game of telephone, the next morning I found myself on right bus terminal, on the correct bus, on my way to the Meroe pyramids.

I wasn’t really sure how it all worked out. It had been a blur of phone calls, panic hang ups, and text messages in broken English and a smattering of French. With the help from a friendly stranger on the bus and the bus driver himself, I found myself getting off the bus at – what I was pretty sure of – the right spot. I was ecstatic. 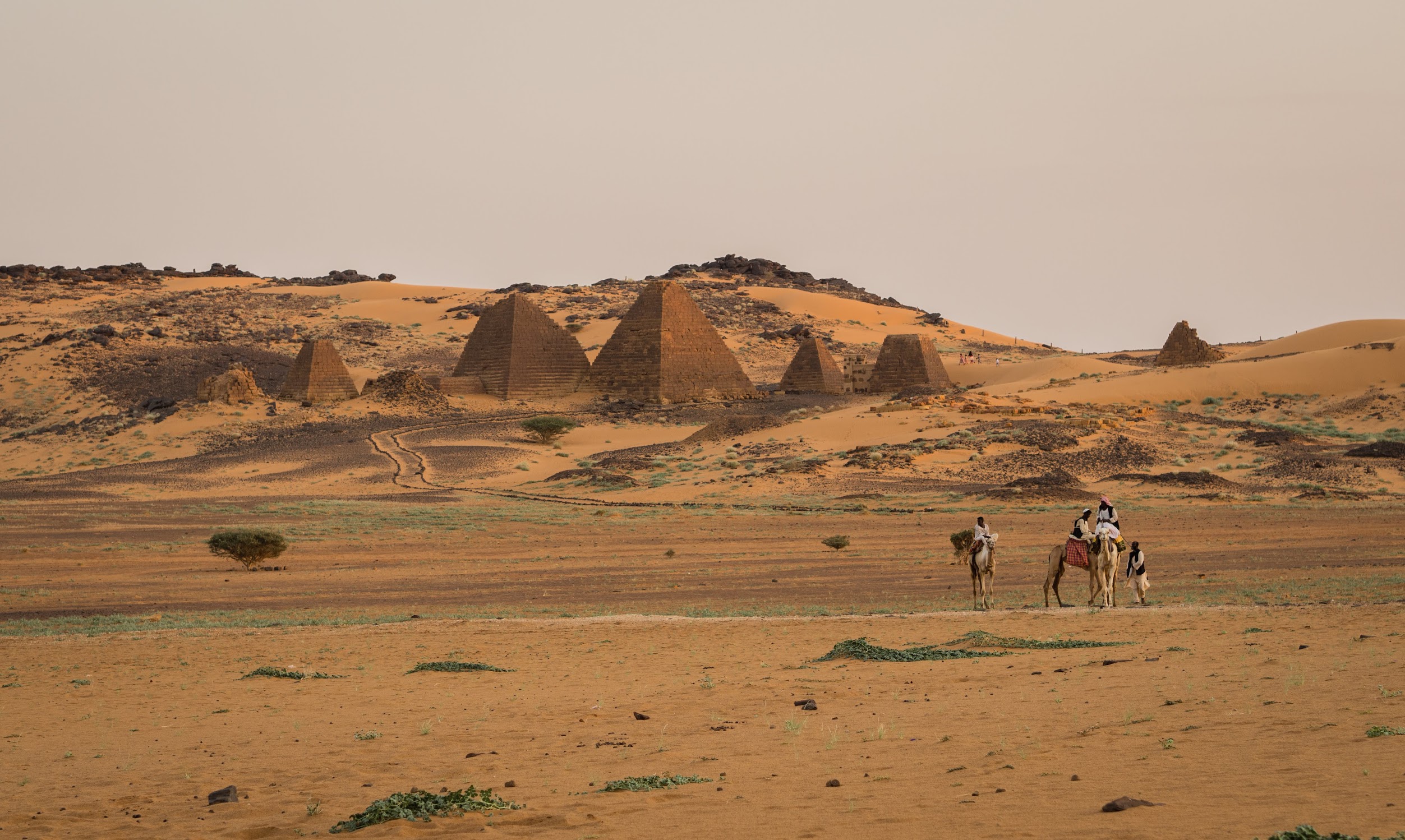 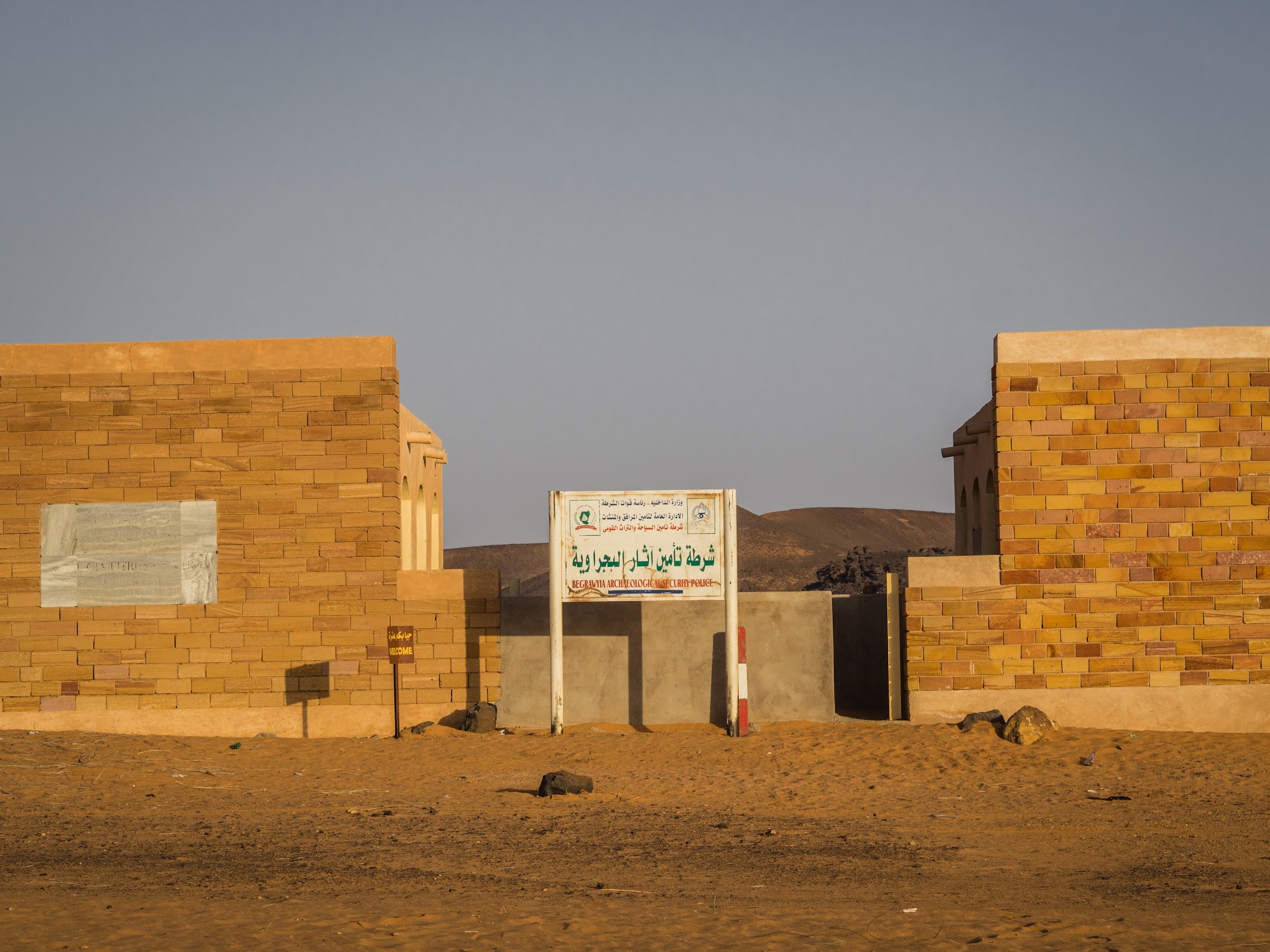 Top: Camels and pyramids at the Meroe Unesco Heritage site
Bottom: Entrance to Meroe Pyramids. There was nobody at the ticket office when I got there so I have no idea what the latest entrance fee is. However, it’s most likely highly negotiable. I’ve heard people pay anywhere from 10 – 20 USD depending on your negotiation skill.

How to Get to Meroe Independently

From Khartoum, take one of the buses from Khartoum heading to Atbara. The buses leave from a non-descript dirt lot, north of Khartoum (“Bus to Meroe Pyramid” on Maps.me).

Then you have 2 options:

Option 1: Get off at Shendi and take a taxi to Meroe. If you do decided to do this, look at your map and zoom in on Shendi. There are 2 roads going from the town of Shendi to the highway. Taxis congregate at the northern junction, so ask to be dropped off here.

Option 2: About 20 km past Shendi lies the ancient city of Meroe with its pyramids. You’ll see them from the highway. You can ask the bus driver to be dropped off here and walk to the site. To return, you could try hitch hiking back to Shendi where there’s at least one hotel (El Kawther by the Nile, 30-40 USD but they’ll try to overcharge) or all the way back to Khartoum.

Shortly after I got off the Khartoum – Atbara bus, a couple of guys in a beat up pick up truck rolled up. One of them introduced themselves as relatives of the student. Two of the many relatives I was going to meet that day.

They dropped me off in front house with a blue metal door and a concrete front yard. A woman – another relative? – with a friendly smile who spoke zero English welcomed me. I wasn’t sure what kind of welcome I was going to receive but her genuine excitement of having me there put me at ease. Nothing worse than feeling like you’re intruding.

The room she took me to was filled with beds, a least 6 of them. She pointed to one of them, telling me to sit. In Sudanese homes, beds are often used as the only furniture in a room, functioning as chairs and couches.

But I didn’t know it at the time. I thought this woman’s house was some sort of a boarding house. Thinking it was MY assigned bed, I started re-arranging my personal stuff around the bed – my Kindle here, my slippers there. I was ready to settle in and rest.

Imagine if a guest comes over to your house and immediately lies down to take a nap on the living room couch… yep, that was me. 2 other women came into the room. I was outnumbered 3 to 1 now and we were all sitting on beds, staring at each other. Well, they stared and giggled. I was just trying not to die from the awkwardness and the suffocating heat. One of the women pointed to an a limp ceiling fan and lifted 6 fingers. I took it that electricity wouldn’t come on until the evening.

Random people walked in to stare and say hi. More relatives. We took pictures. We learned that Google Translate do Arabic translations pretty well. “Yes, I’m married.” “No kids, but we have a cat”. “Yes, he’s a very fat cat.”

About an hour before sunset, a couple of guys came in and offered to take me to the pyramids. I invited the women who’d been fussing around me to come along. Roadtrip time! 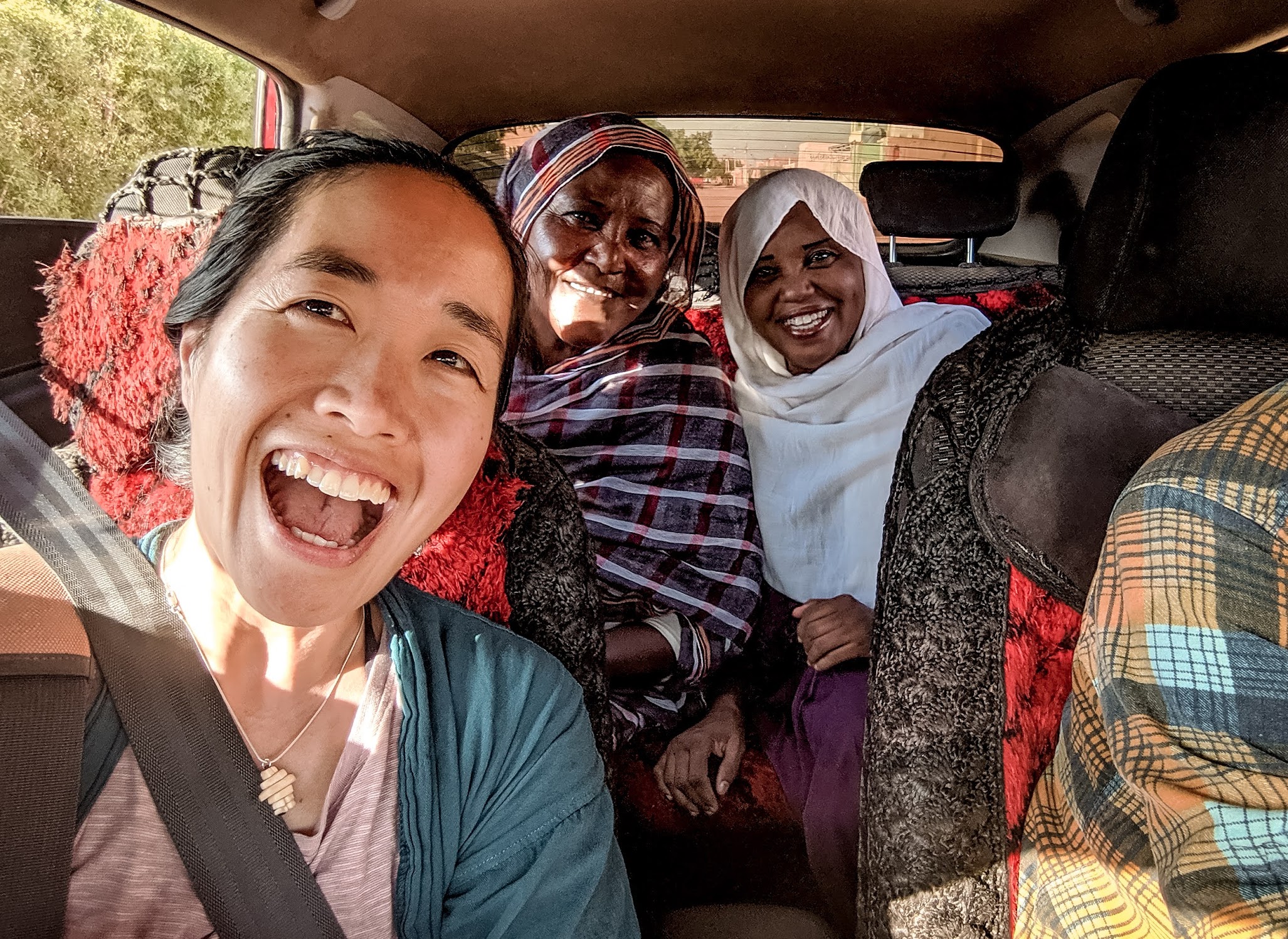 Roadtrip with the beautiful ladies of Shendi. I wrote their names down on my notebook, which I accidentally lost on the flight out of Khartoum 🙁 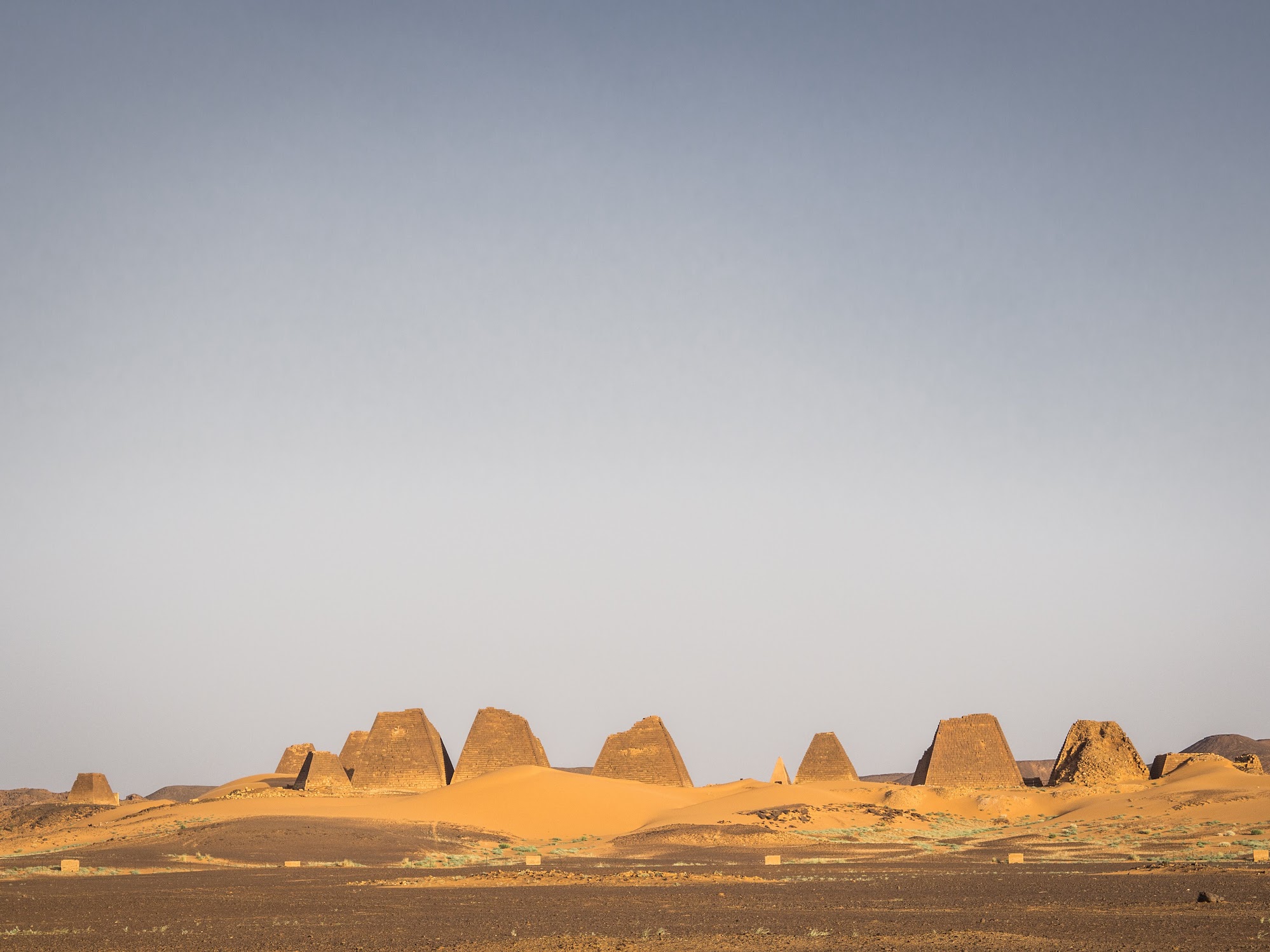 Meroë and the forgotten Kingdom of Kush

Rising out of the desert sand north of Khartoum is a collection of 200 tall and slender pyramids. Remnants of the once-wealthy city of Meroë, the capital of the ancient Nubian Kingdom of Kush (1069 BC – 350 AD). Source. It is now undoubtedly Sudan’s most popular tourist destinations.

It was a happy coincidence that my trip included a visit to both Egypt and Sudan. The history of the Kingdom of Kush is closely intertwined with Egypt, Sudan’s neighbor to the north.

As Egypt declined in power, the Nubians saw opportunity. They pushed north from their capital Napata and the Nubians successfully ruled Lower Egypt as part of Egypt’s 25th dynasty.

After a successful invasion by Assyrians however, the defeated Nubians pharaohs abandoned Egypt and retreated. They moved their capital to Meroe – further south from the border – to protect against future Assyrian invasions. The location was chosen because it was fertile, along a trade route, and rich in minerals including gold.

The Discovery of Meroe and its Pyramids

Excavations of Meroe in 1902 revealed not only remnants of exquisite goldwork, but of a great and populous city with temples and royal palaces. The necropolis at Meroë, consisting of more than 200 tall pyramids, is a further testament to the achievements the Kush Kingdom.

Dating from 300 BC to 350 AD these pyramids mark the tombs of royalty, just like their older Egyptian cousins.

However, the Kushites pyramids in Meroe are narrower at the base and not adorned with the capstone at the top. Another differentiating point: unlike some Egyptian pyramids, the burial chambers in Meroe are located underground and not within the pyramids themselves. A one-room chapel was often built to one side of the pyramid with a pylon decorating the entrance. 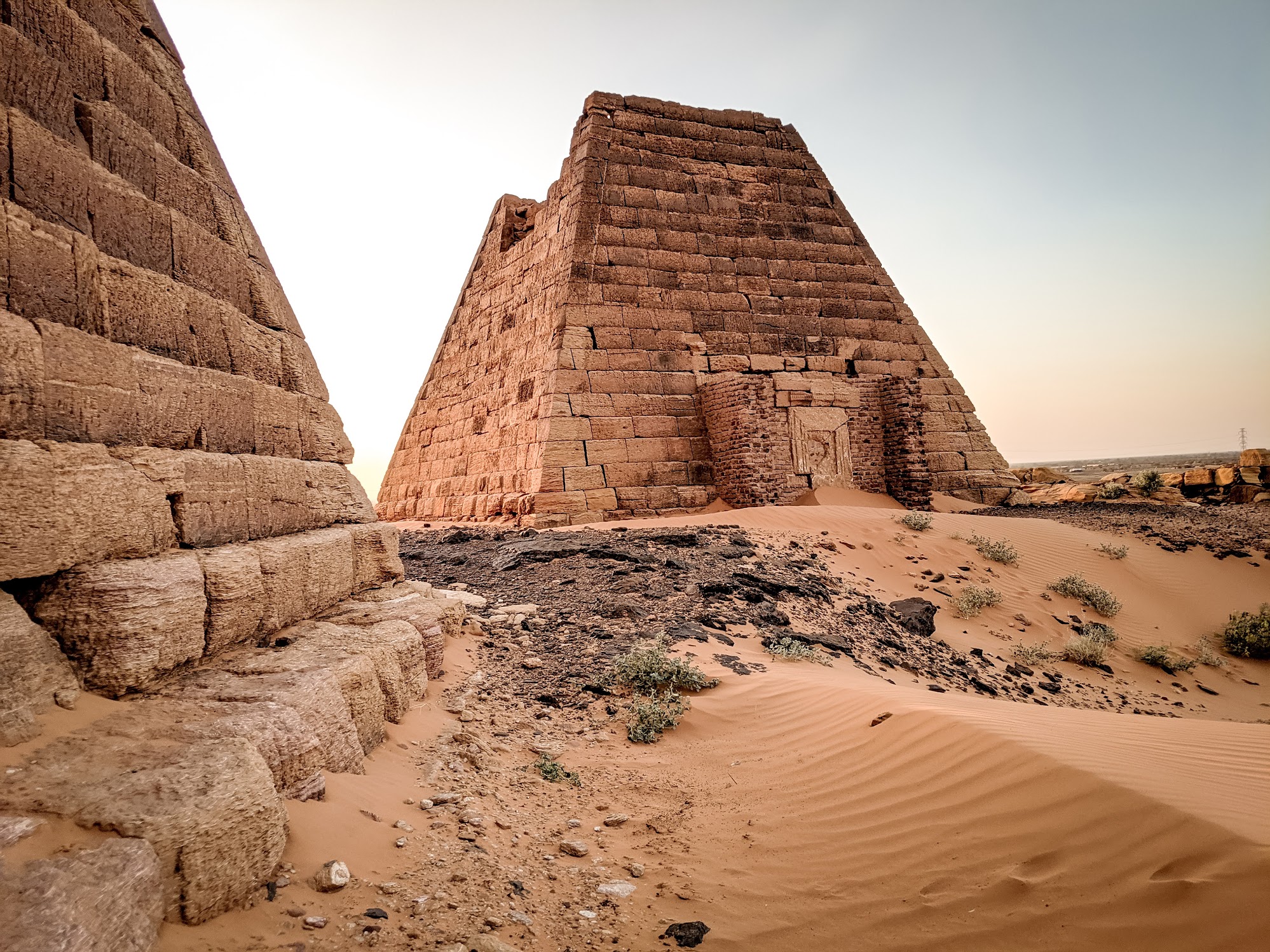 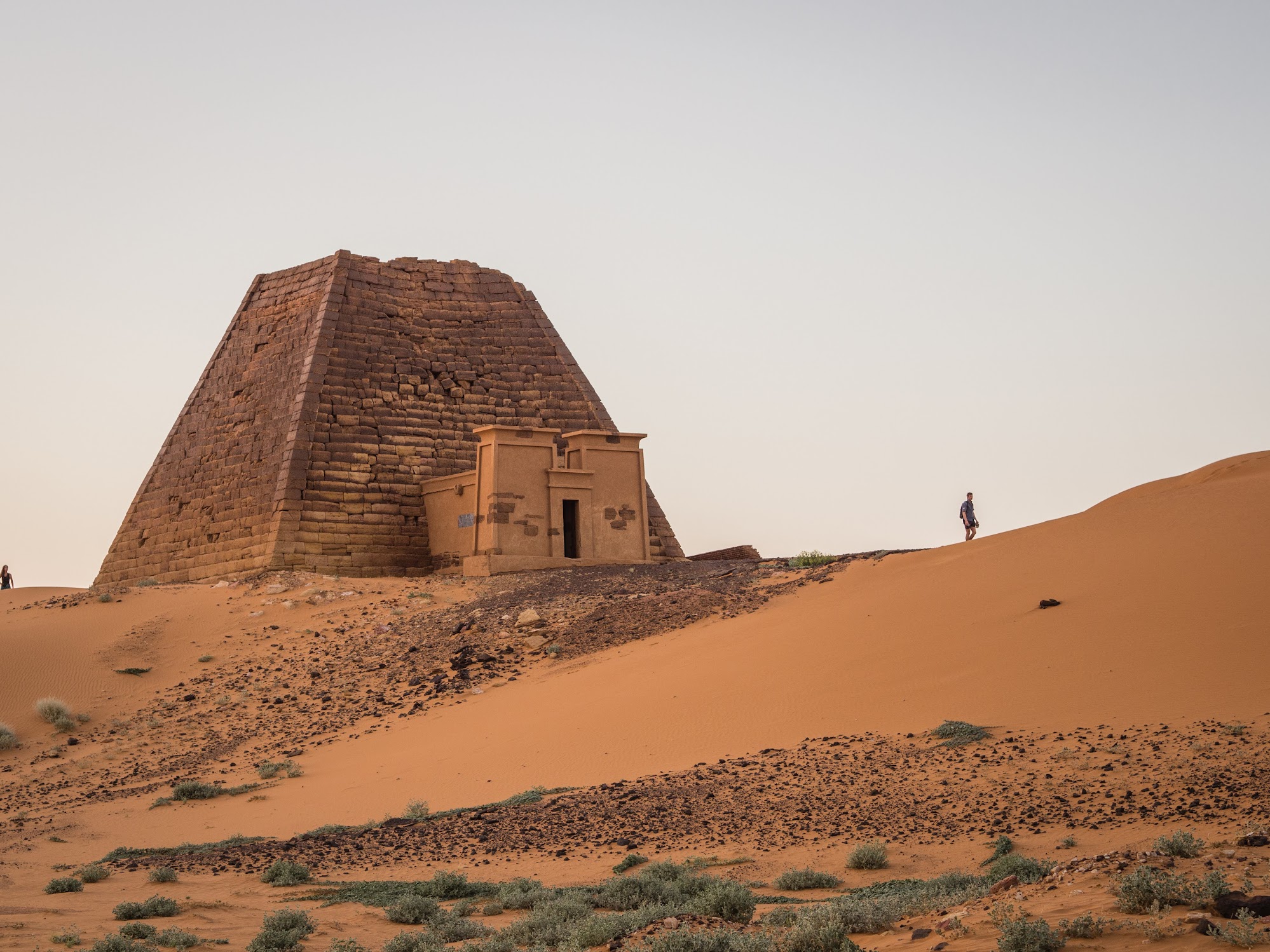 The chapel entrance of a pyramid in Meroe The half-buried pyramids of Meroe, the necropolis of the ancient Kingdom of Kush. Other than a couple of other tourists and a Sudanese family having a picnic, I had the place for yourself.

The site was much bigger than I expected and walking up and down sand dunes was definitely not the easiest. I stayed until the sun set and it was too dark to see. There were pyramids still unexplored, but my ride was calling me over. Time to head back.

I tried to burn into memory all the sensations I was feeling: the warm sand between my toes as I ran down the dunes, the way the light fades behind the horizon, and how lucky I felt to be at that place at that moment.

—
Visiting Meroe and staying with this group of strangers ended up being one of my favorite travel stories (after this one), and it has nothing to do with the pyramids themselves despite their beautiful setting and intriguing history. Instead it has everything to do with the spirit and generosity of the Sudanese people. A theme that followed me to my next destination: the Taka Mountains of Kassala in the south.

Where to Stay in Meroe

Note: I wrote a guide on traveling to Sudan independently here. 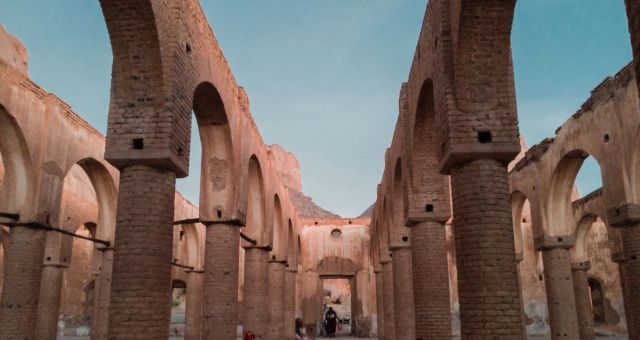 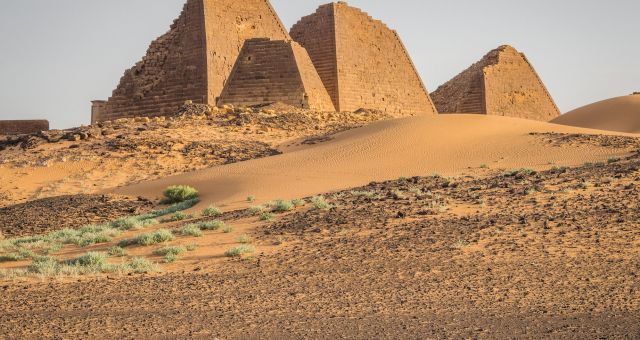 Why and How to Travel Sudan Independently