Safety When Traveling Solo (and Female)

I’m married but I travel by myself a lot. As a matter of fact, 80% of my travel is done solo. My husband and I have different styles of travel and there are parts of the world that Jack has no desire to visit. I’m too cheap and independent to join a group tour, so the next thing you know, I’ve found myself traveling solo – and female – to countries such as Nicaragua, Ethiopia, Kyrgyzstan, etc. I’ve done solo road trips in Florida, Alabama, Missouri, California where I slept in my car in urban areas, in cheap motels, or in campgrounds. 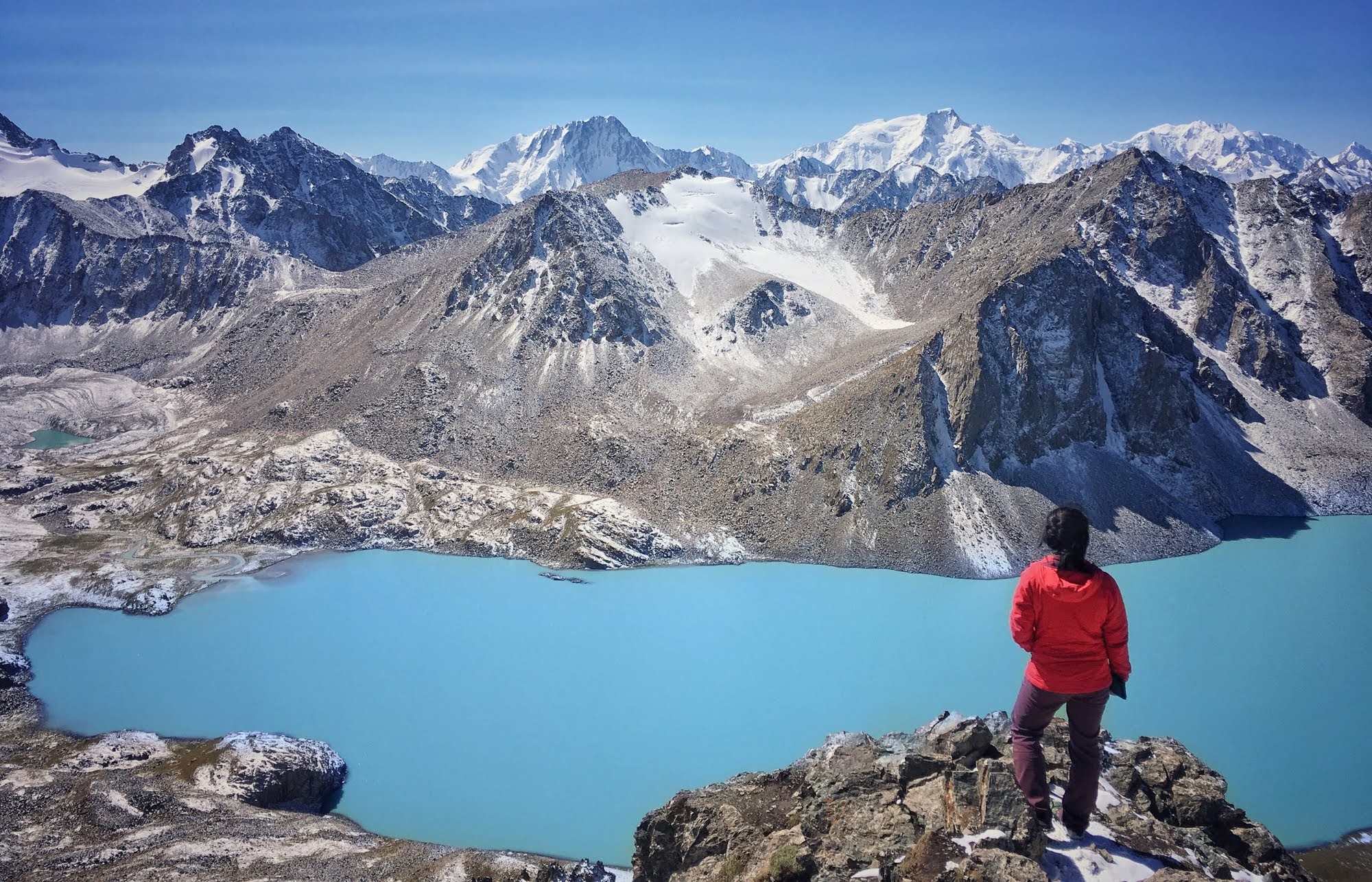 “Solo” trekking in Kyrgyzstan with 2 young Dutch backpackers. As often the case, you end up meeting people on the road so it’s quite rare that solo travel means “alone all the time”.

I attributed my comfort in traveling solo from the a couple of things:

1. Nobody has ever told me I couldn’t. I went on my very first solo trip when I just recently moved to the United States. I flew to Los Angeles and made my way back to Seattle visiting coastal towns such as Morro Bay, Carmel, Portland, etc by taking a series of Greyhound buses and hitchhiking. Alone. It seemed like a good idea at a time and nobody told me otherwise. My parents were halfway around the world and I don’t think I even told them.

On this trip I stayed in a hostel for the first time. I rode to Hearst Castle on the backseat of a highway patrol car. A woman had a psychotic breakdown and locked herself in the Greyhound bus’ toilet. For me – a 20 year old, recent-transplant to the country – it was an eye-opening journey. I was hooked and I’ve been traveling ever since. I was emboldened by my very first solo travel where nothing happened, so I kept traveling by myself. I kept having a great time, so I just keep on going.

2. I’ve always lived in urban areas with diverse population. Throughout the years I’ve learned to be street smarts – especially as a 5-foot tall woman – that come from living in dense population where a big gap between the have and have-nots exists. I cross the street when I don’t like what I’m seeing ahead. I walk fast and on purpose, even when I don’t know where I’m going.

3. Violence against women is not limited to foreign countries. I think being a woman – anywhere  – is a risk considering the prevalence of violence against women globally. Traveling with men don’t shield women from being purposely hurt. Therefore I feel that anything that could happen to me, can happen here right home.

Being comfortable traveling solo doesn’t mean that I’m not aware of the risks involved. It’s a fine line between keeping myself safe and paralyzed by fears of the unknown.

The followings solo travel tips have helped me navigate that line. They are not necessarily gender specific and all based on common sense. Feel free to pick and choose what works for you and your travel style. I’ve been known to break my own rules every now and then. Your mileage will vary.

I pay attention to how much I drink.

I love red wine, craft beer, and whiskey. I never say no to wine tasting. Or a brewery tour. Or a solo pintxo bar crawl in Bilbao, Spain (because while in Basque country…). Some of my favorite travel memories involve sitting in a cafe, people watching while enjoying a glass of wine.

But I carefully watch alcohol my intake. To be honest, it is not much different than I how drink socially at home anyway. I don’t like feeling out of control so I always try to be in control. It’s even more important to be in control when you’re in a foreign country, traveling alone with no one to count on except yourself.

Tips on drinking alone in bars: I like going early before the crowds. If I have to leave for the bathroom, I ask the bartender to keep my drink behind the bar. I come to bars for the drinks and people watch, less to be social so I always bring my Kindle with me. It’s a not-too-subtle way of saying “Don’t talk to me. I’m enjoying myself too much.”

I always get a local SIM card.

The first thing I always do after I land in a new country is get myself a local SIM card. I always feel 1000x better knowing that I’m connected. I can look up maps to find my way, keep in touch with people back home, call emergency numbers, etc. Using Hangout or Whatsapp, I can quickly share my location if I need to. It allows me to more spontaneous. I wouldn’t have jumped in the car with these strangers in Turkey if I didn’t have my phone (and Internet).

Note: In the US, I now use Google Fi. I pay $10 per 1GB and it works in 192 countries – automatically, no need to register, activate, etc. It makes travel so much easier because I have data as soon as I land in a new country. This has helped me so much.

I dress conservatively. I dress to blend in.

Loose-fitting tops that cover my shoulders and chest, and long pants are my go-to travel uniform. I adjust accordingly based on what I observe local women wear. This has made a big difference in how I was treated and perceived.

In more conservative countries, I wear t-shirt and shorts instead of bathing suit in beaches and swimming holes.

Obviously there are some things you can’t change. It doesn’t matter how much I dress like a local, my Asian face will never blend in places like Africa. Aim to stand out the least from the rest of the tourists 🙂

When arriving at night, I pre-arrange a transport from airport to my hostel.

Sometimes I’d even splurge on a private transport after a long-haul flight. Exhaustion is never a friend of mine, especially in places where I feel I need to have my guards up. Airport arrival is one of those places.

Pro tip: Some airports are extremely hectic with wild taxi drivers and “helpers” crowding newly arrived passengers. Sometime I find it useful to take 5-10 mins to just sit down and get my bearing. Figure out where things are: the official taxi stands, the information booth, and other services that could help you exit the airport more safely and quicker.

I’m hyperaware on travel days, in bus and train stations.

Travel days are the most stressful days during a trip. I especially feel very vulnerable coming in and leaving bus and train stations. To mitigate this I research extensively how to get to and out of these stations and the prices. Public buses? Subways? Taxis? Some stations have official taxi stands. In others you have to rely on unofficial taxis. Read beforehand which taxis avoid, common scams, and safety issues.

I pick and choose when asking people for help.

In Morocco, I learned not to ask just anybody for direction. The young kid suddenly didn’t look so young as he took me to an isolated alley in the souk and made me pay him to take me back to the main square. If I need to ask for directions or help, I ask someone who works in a store or a restaurant. Or an older couple. Or women.

I don’t go out alone at night.

As a general rule – I don’t go out exploring at night, especially alone. There are exceptions of course, like when I stay in hostels that are smack dab in the middle of a busy and well-lit part of town where there are always people around until late at night.

When I go out with people I meet from hostels, I make sure that I can get home by myself independent of the group. That sometime means not going anywhere too far out of town I can’t get a taxi back.

Not be overly friendly or agreeable.

I’m very wary of locals who hang out in hostels/hotels bars. Especially when they’re overly friendly – my inner cynic can’t help but asking “What do they want from me?”

In some cases, harassment comes from the people that you supposedly can trust: your tour guide. I got hit on by my tour guide in places like Cuba, Guatemala, Ecuador, and Turkey. In Indonesia my diving guide followed me back to my hostel and offered me a “special” private diving lesson the next day.

In the early years of my travel I endured these harassments silently with gritted teeth. As young girls, we were often raised to be polite and agreeable. I think that’s why many of us find it so hard to say “No”. Now that I’ve gotten older, I don’t deal with bullshit like that anymore. I make sure they know the attention is neither welcome, nor flattering. If they don’t stop, I make a scene. I walk away. I report them to their supervisors.

Nowadays I draw a firm line with male tour guides and I do it early. I’m polite, but guarded. When they don’t believe that I’m happily married (because I don’t wear a wedding ring and somehow the idea of a married woman traveling alone still weirds people out), I bring up photos of Jack and me. Sometimes it works, sometimes it doesn’t.

I prefer hostels over budget hotels.

If I had the choice, I’d rather stay in hostels or even shared spaces on Airbnb than in budget hotels. These impersonal institutions often have lack security. The long hallways and rows of empty rooms always make me feel very exposed. I always feel it’d be so easy for someone to barge it unnoticed into my room anytime. Unfortunately, in mid-sized towns (read: Creepy Hotel Experience in Kars, Turkey) this type of hotels is probably your only choice. But I never like it. I’m thinking of investing in a portable travel lock like this.

—
I won’t lie. Violence against women is a big problem. Thus it can seem like it’s harder for a female traveler to explore the world solo. But most of the world is not a scary place. I’ve been to over 60 countries – most of them by myself – and I can count the number of uncomfortable situations I encountered in 2 hands. Yes, I’ve been scared. But getting through these uncomfortable – occasionally scary – experiences has taught me to trust my gut.

The rewards of solo travel far outweigh the negatives. Even if Jack suddenly transforms into as avid of a traveler as I am, I’ll still insist on going on some trips by myself. Traveling solo is not better or worse than traveling with friends or your significant other. It’s just different. Traveling alone has been one of the most empowering things I’ve done as a woman.