A Taste of Sicily: The Best Things I Ate in Siracusa

One of the reasons I was really excited about visiting Sicily was the food. Sicilian food is known for their seafood, wine, granitas, and cheese – my kind of food pyramid! Between altitude sickness and lackluster Tibetan food, I lost weight on my previous trip (which never happened before!) so I came to Sicily with extra appetite to spare. I’m glad I did because there was so much delicious thing to eat, almost too much. First world problem, amirite?

Do you want to know what and where to eat in Siracusa? Keep on reading. 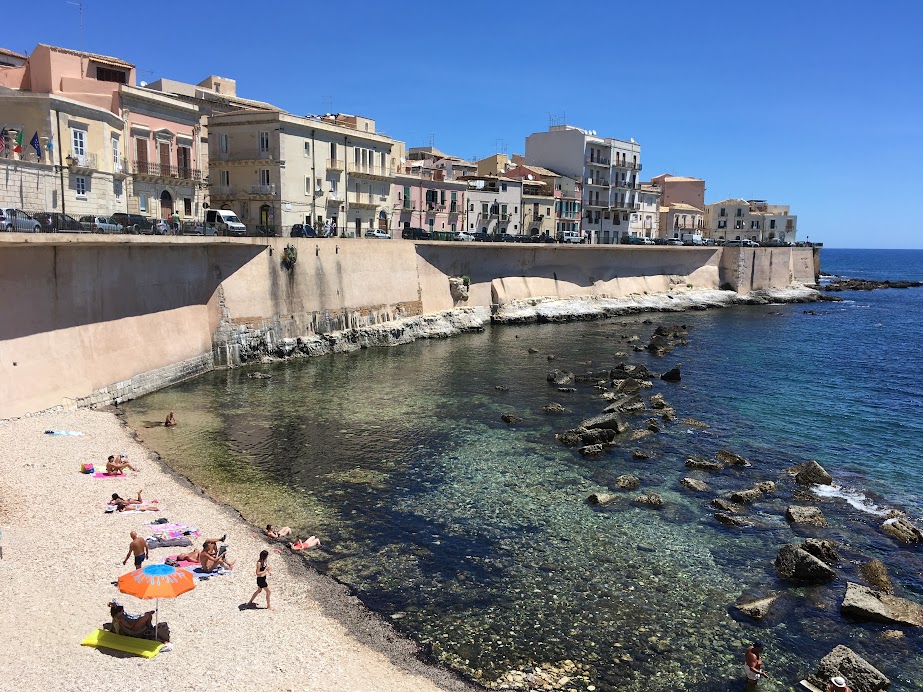 Our Airbnb in in Siracusa is around the corner from the Ortigia’s famous morning market. I spent every morning during our one week stay prowling the market, marveling at bright orange giant prawns, palming giant onions, and tasting local Sicilian cheese – from creamy ricotta salata to the pear-shaped, provola dei Nebrodi. 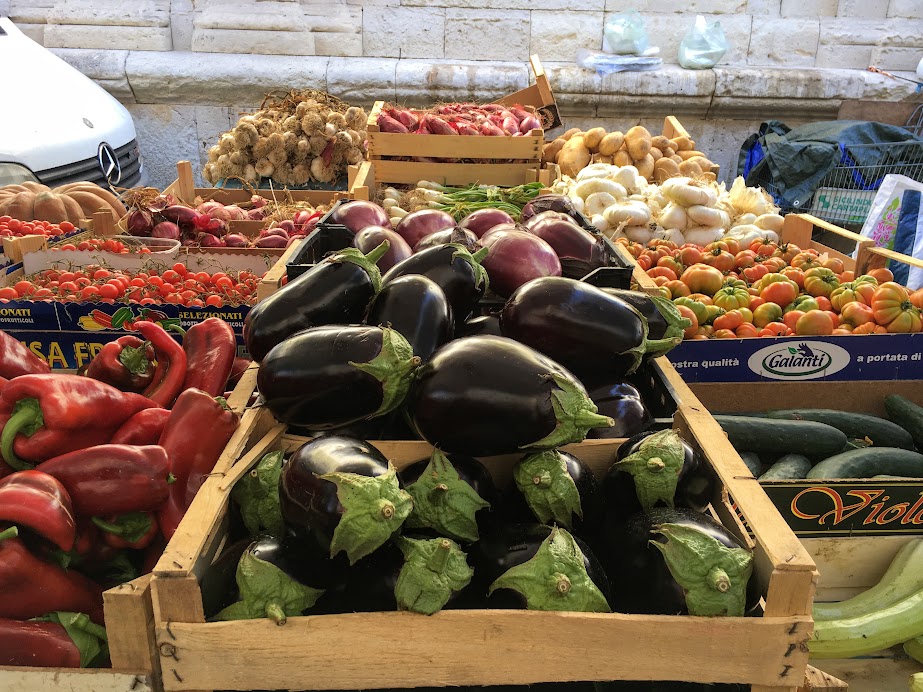 Colorful veggies in Ortigia Market – this makes me want to learn how to cook more than anything. 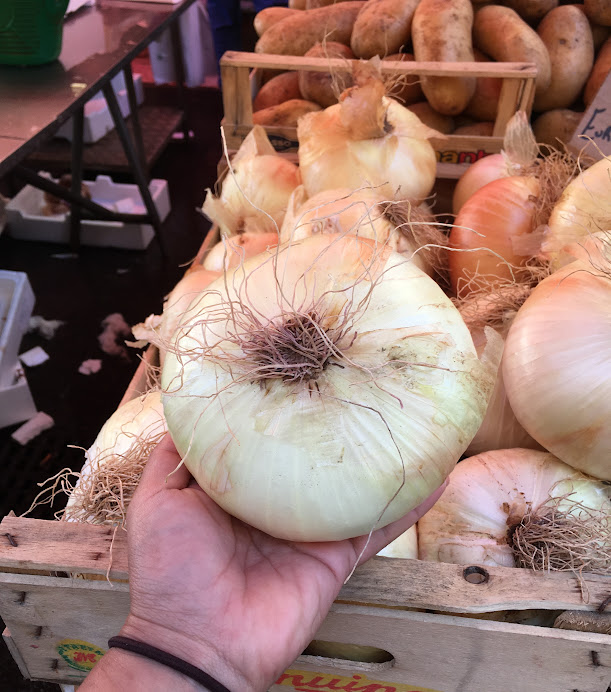 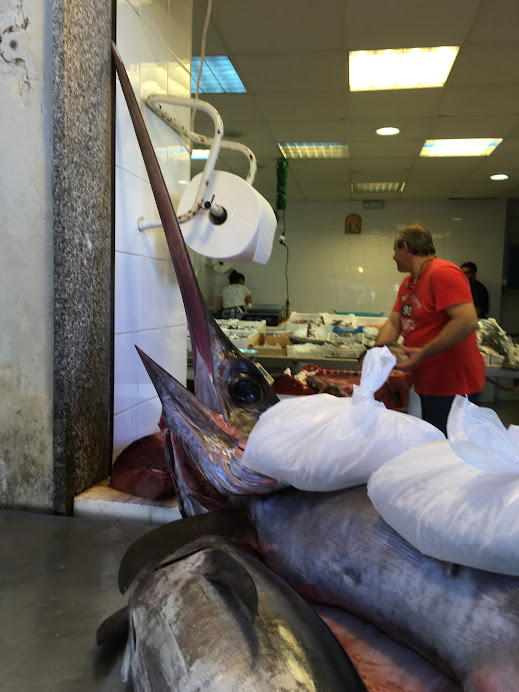 PSA: Mediterranean swordfish stock is not yet recovered – so try to avoid “spada” or swordfish while in Sicily 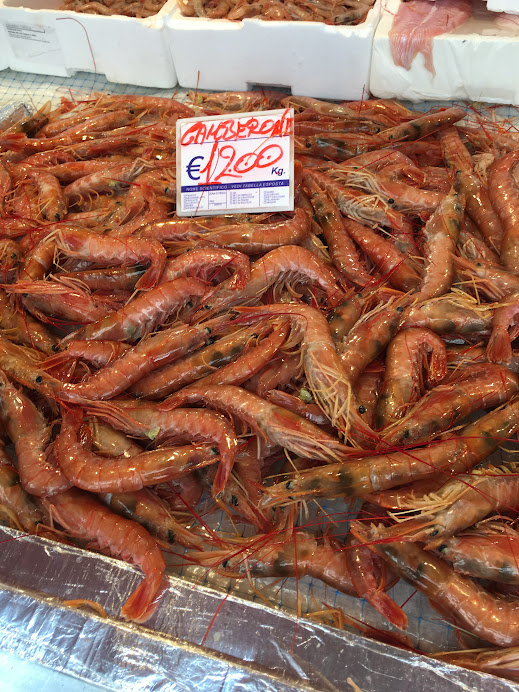 Have some shrimps instead. These gamberoni is so sweet it just needs a touch of butter and garlic. 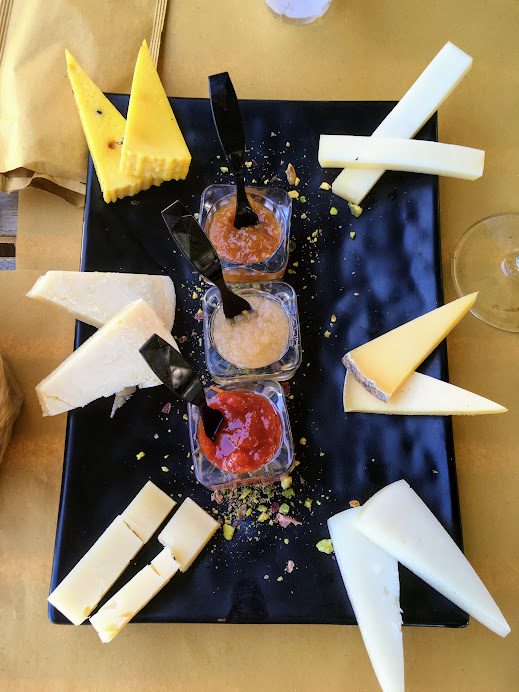 The cheese platter from La Salumeria in Ortigia market 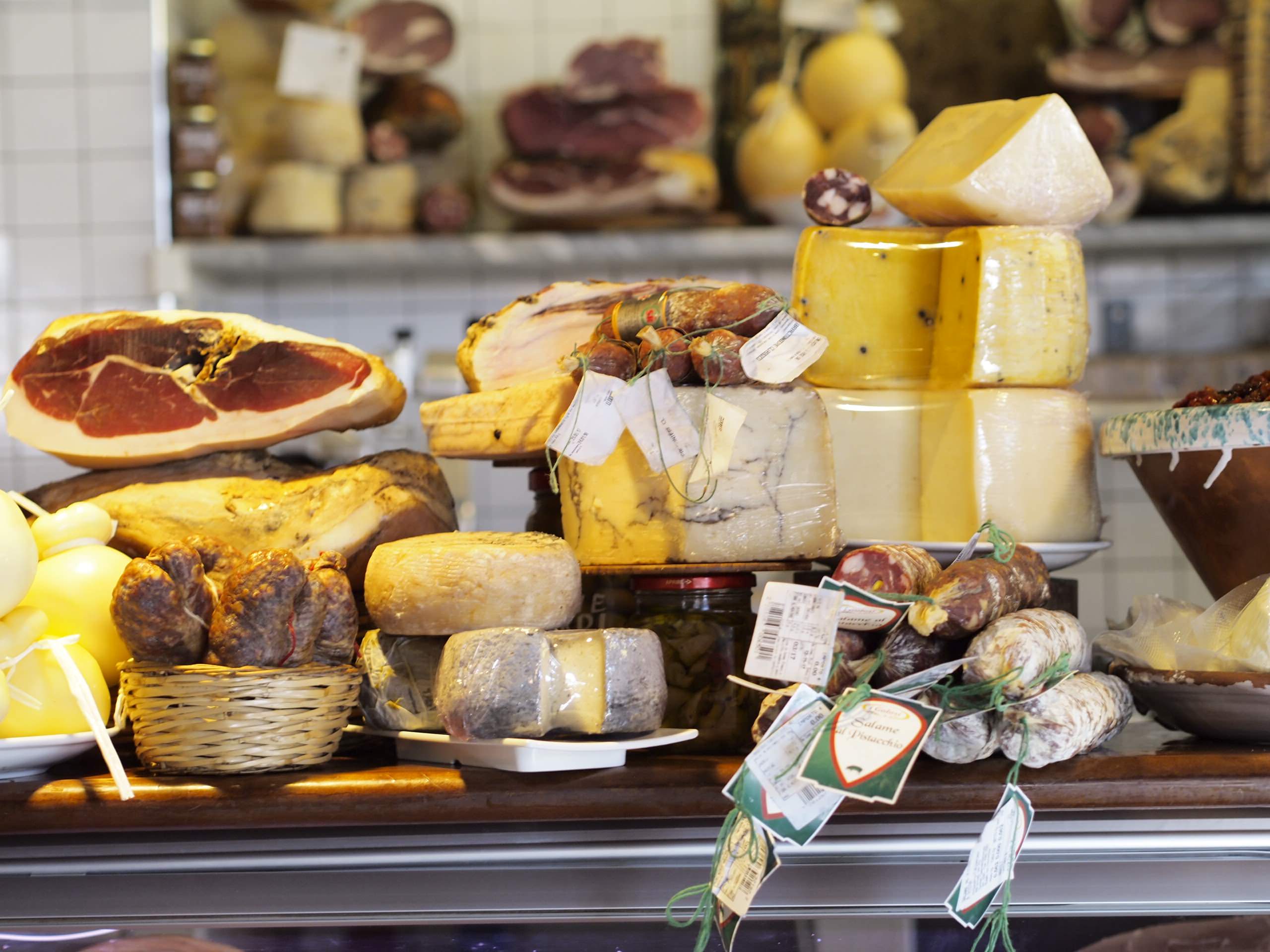 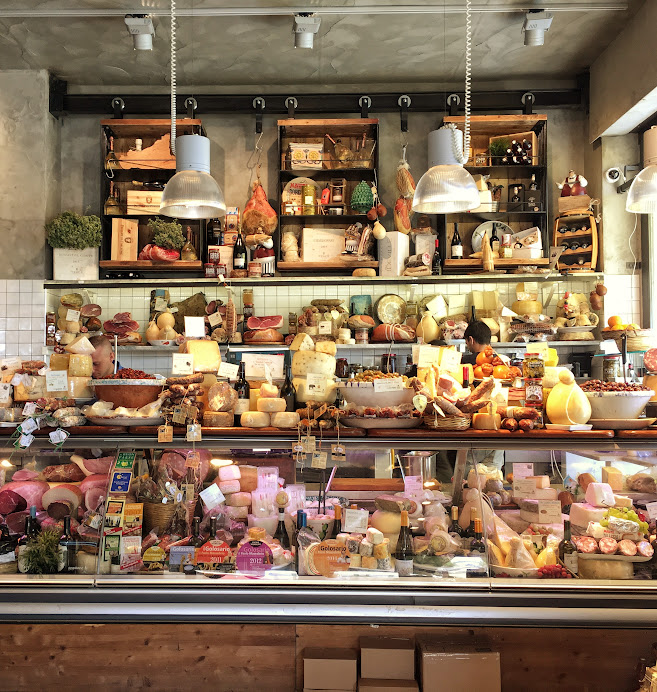 Cheese and meat at Ortigia market 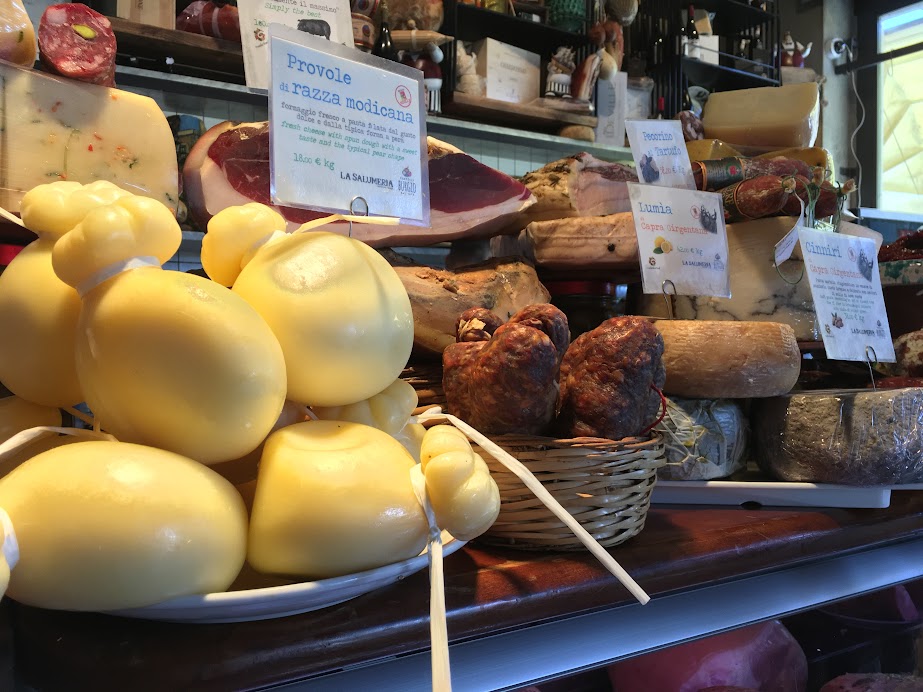 More cheese and meat at La Salumeria in Ortigia 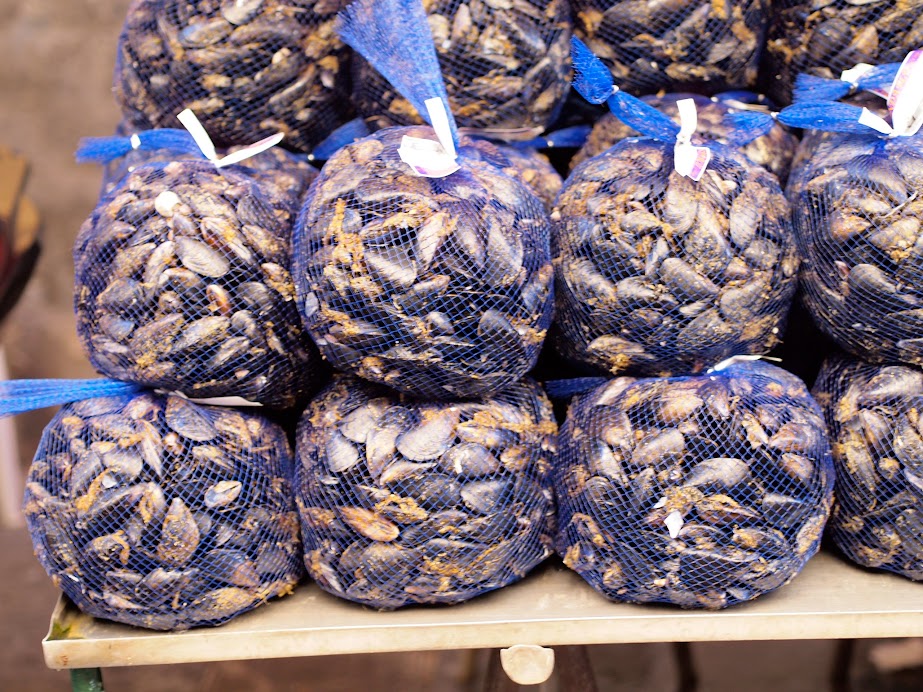 The Sandwich from Caseificio Borderi

While in Ortigia market it’s hard to miss Caseificio Borderi, a cheese and sandwich shop at the end of the market. Just look for the long line of people around lunch time crowding around Andrea Borderi, the sandwich king himself.

In general, I scoff at the idea of waiting in line for food. Especially for a mere sandwich. No way! 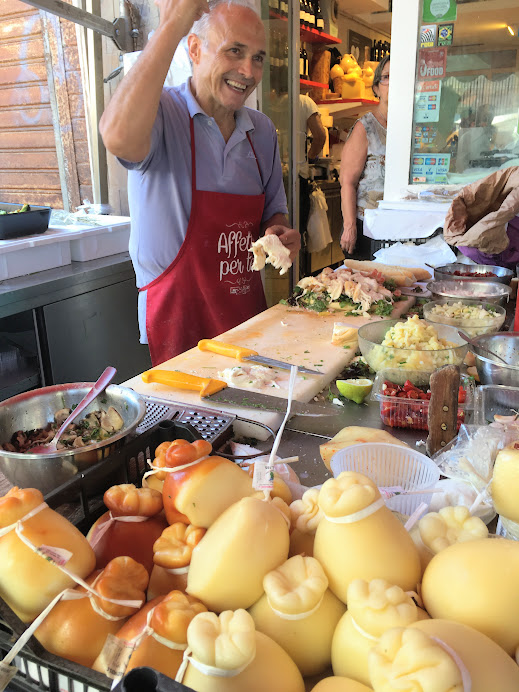 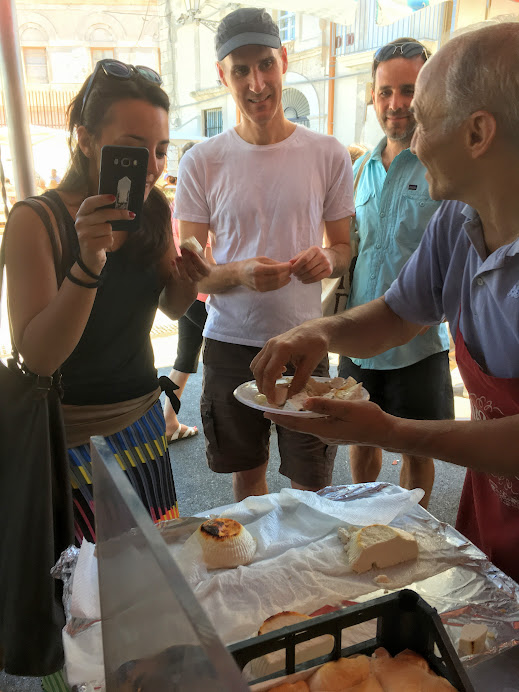 That thrice-baked ricotta was Borderi’s specialty, and it was heavenly! 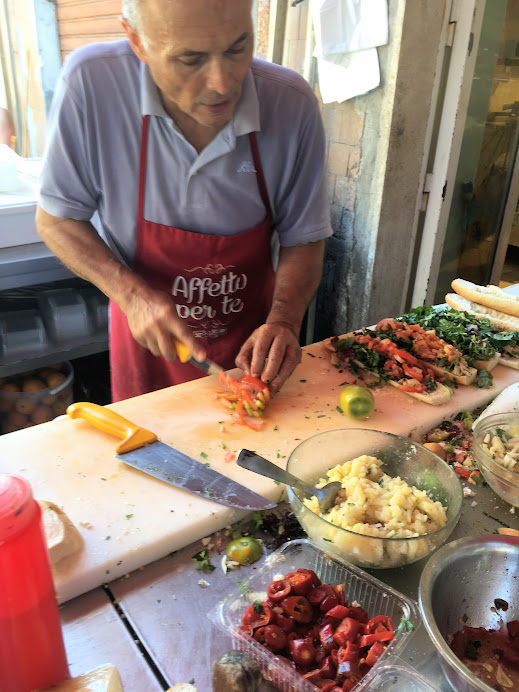 But the more I watched Andrea work, the more I got intrigued. It was obviously apparent that it was more than just about sandwiches. It’s a one-man show as Andrea chops, slices, and stuffs, gives out cheese samples, and in general takes his own sweet time crafting sandwiches like a piece of art – a sprinkle of fresh herbs here, a slice of thrice-baked ricotta there – each sandwich slightly different than the last (you don’t get to order here, you get what he makes).

Every now and then he’d stop to joke with co-workers, greet a customer, or tell a story, “I grew up in a household full of women, and I used to play with Barbies…” with a smile that never leaves his youthful face. Who is this guy that obviously gets so much enjoyment from making sandwiches?

One can’t helped but be charmed. 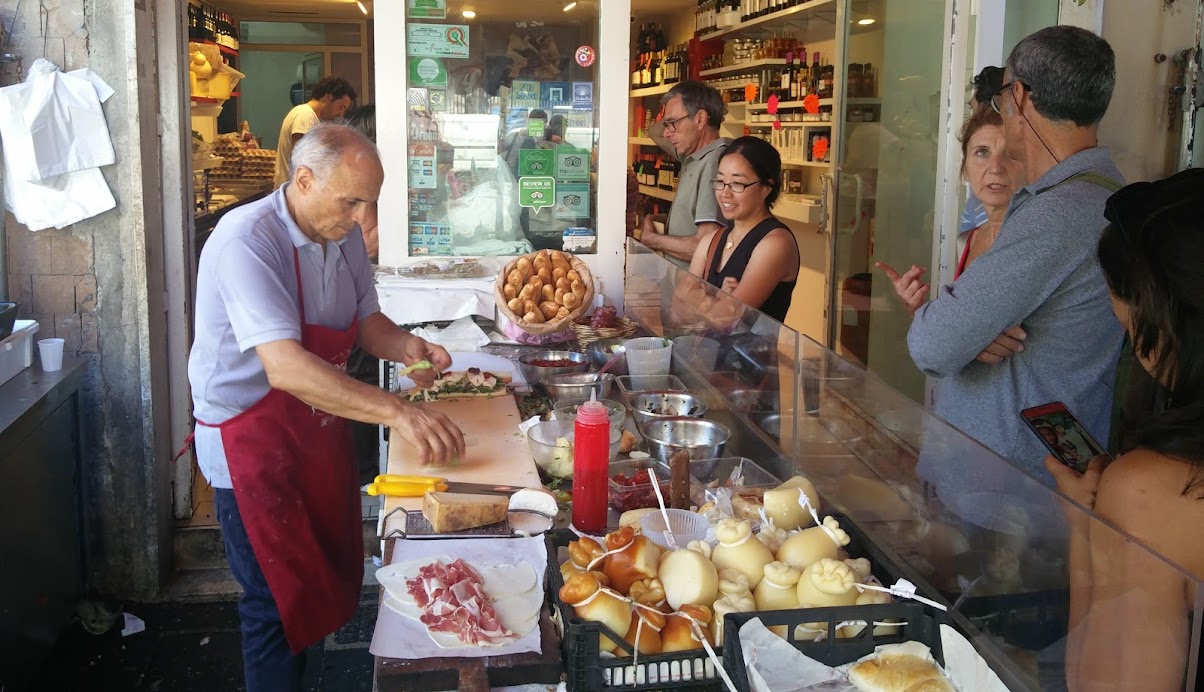 So one morning, I decided today is the day I break my no waiting in line rule and join the line. After 45 minute of waiting I walked away with a hefty sandwich filled with god-knows how many different types of cheeses, olives, and vegetables. Was it good? Of course. Was it 45-minute-in-line good? You know what.. I think you should find out for yourself 🙂

It was hot, hot, HOT in Sicily when I was there (well, what do you expect of Europe in July, Jill?). Granitas saved the day! I ate a lot of granitas because I turn into a hot mess whenever the temperature reaches above 80 and only frozen desserts can get me through the day. 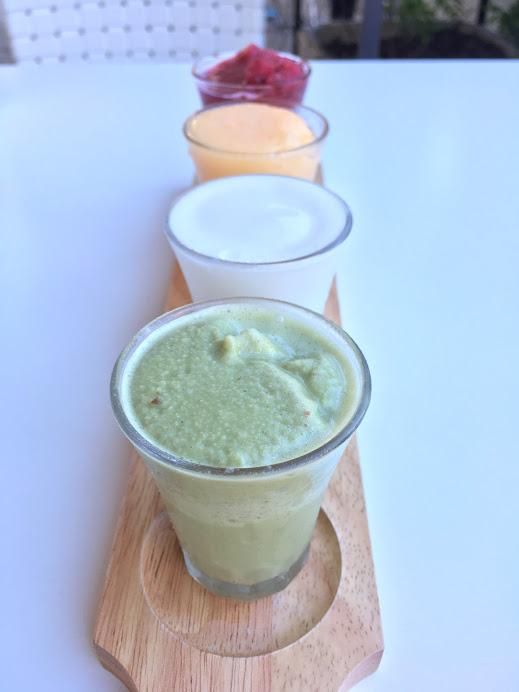 The granita sampler from Cafe Apollo – the ricotta one is my fave!

What is granita? Granita’s is a semi-frozen dessert made of water, sugar, flavorings. I think of it as Italy’s answer to slushies. Even though granitas can be found throughout Italy, its birthplace is Sicily and they’re very proud of it. So as you can imagine, I came across a lot of places that sell granitas. Which is good. I needed a lot of them.

My favorite though is Cafe Apollo near the ruins of Apollo Temple in Ortigia. They offer a sampler of 4 granitas for 5 EUROS! What a deal! I liked both the ricotta and the pistachio granitas, but if I had to choose only one, I’d go for the ricotta – the combination of salty, sweet, and creaminess was out-of-this-world delicious.

Rumor has it that Sicilians eat granitas for breakfast with a side of brioche. Now, I’d never actually spotted anyone doing this… but people who eat desserts for breakfast are my kind of people.

Something I try to do within the first day or two of arriving at a new country is to go on a food tour. Why a food tour? Because I want to know right away what local specialties to seek out. Food has definitely become a bigger focus on my travel lately – I love learning about what people eat, its surrounding rituals, and history.

Often times the guide is also a good resource for hole-in-the-wall bars, local politics and stories, and offbeat attractions. I’ve done food tour in Miami, Berkeley, and even my own hometown, San Francisco. On each tour, I always learn something new.

On my second day in Sicily I joined a Siracusa food and wine tour with Sicily Activities. I’m so glad I did. It turned out to be one of the highlights of my time in Sicily. With just me, 2 other people, and the guide the experience felt less like a tour and more like hanging out with friends that lasted over 3 restaurants and glasses of wine.

Everything we had was freshly prepared and delicious, but I did have some favorites.

See the fried sardines on top of poached beets and orange – the one in the middle of the platter? I was hesitant at the combo at first. Fried fish and fruit? Who would’ve thought that they’d go well together? But they do. And IT WAS DELICIOUS! 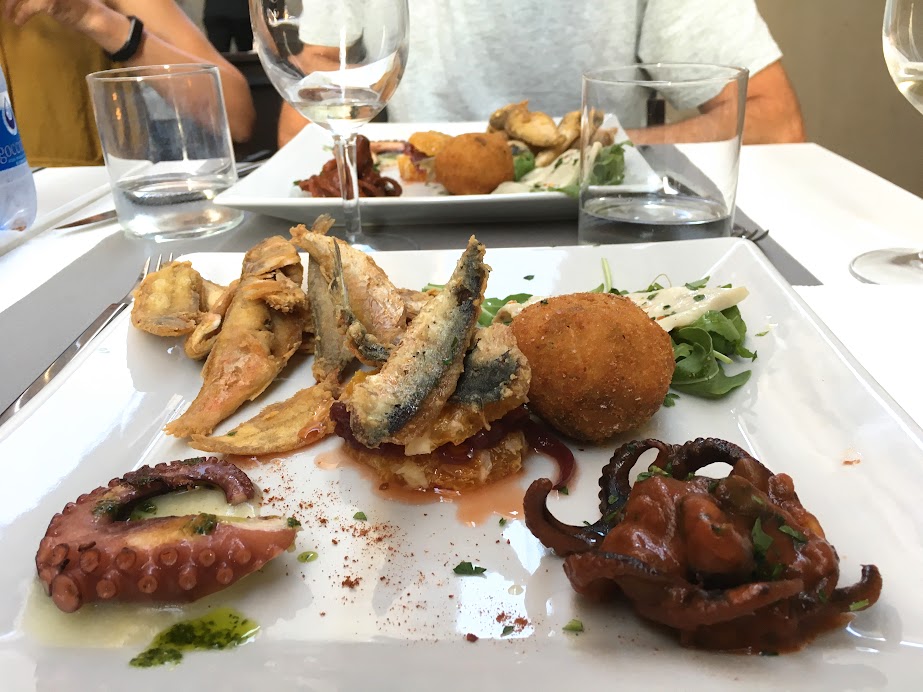 I just love how pretty this platter is. I even tried the octopus even though as a general rule, I don’t eat smart, cute things. 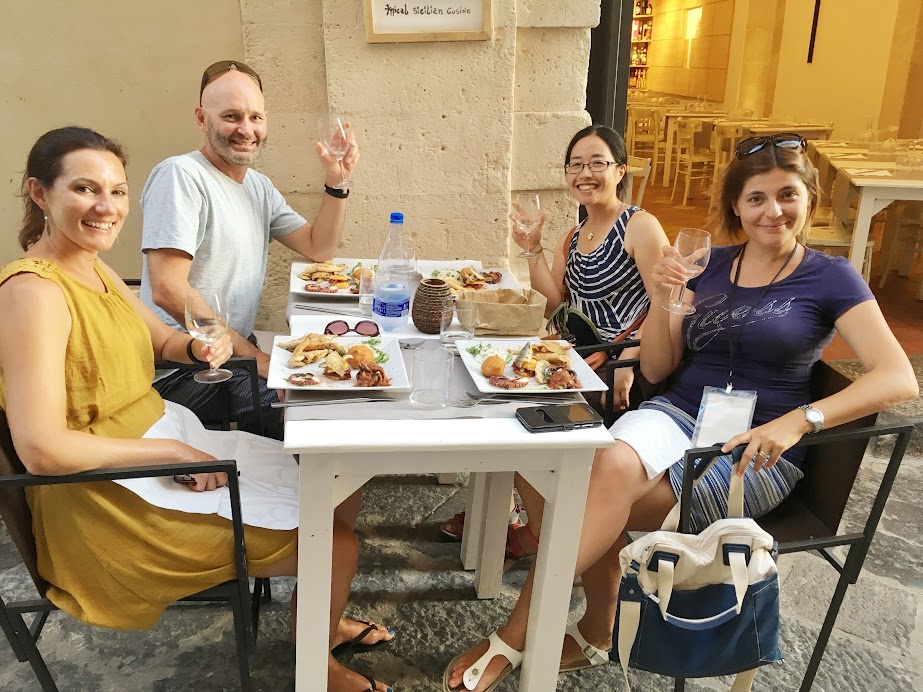 With Sicily Activity guide, Elisa, and honeymooners from New Zealand

Our second stop of the food tour of Siracusa was Taverna Giudecca in Siracusa’s Old Jewish Quarter. I loved everything on this platter but the caponata was the star – so much so that I bought a tub of each home.

The caponata – eggplant and tomato stew – was an explosion of flavors. Sweet, salty, and with a touch of acidity (from vinegar?). It was so good I ate it out of the tub the next day. It went very well with the crusty, fresh bread I got from the market. 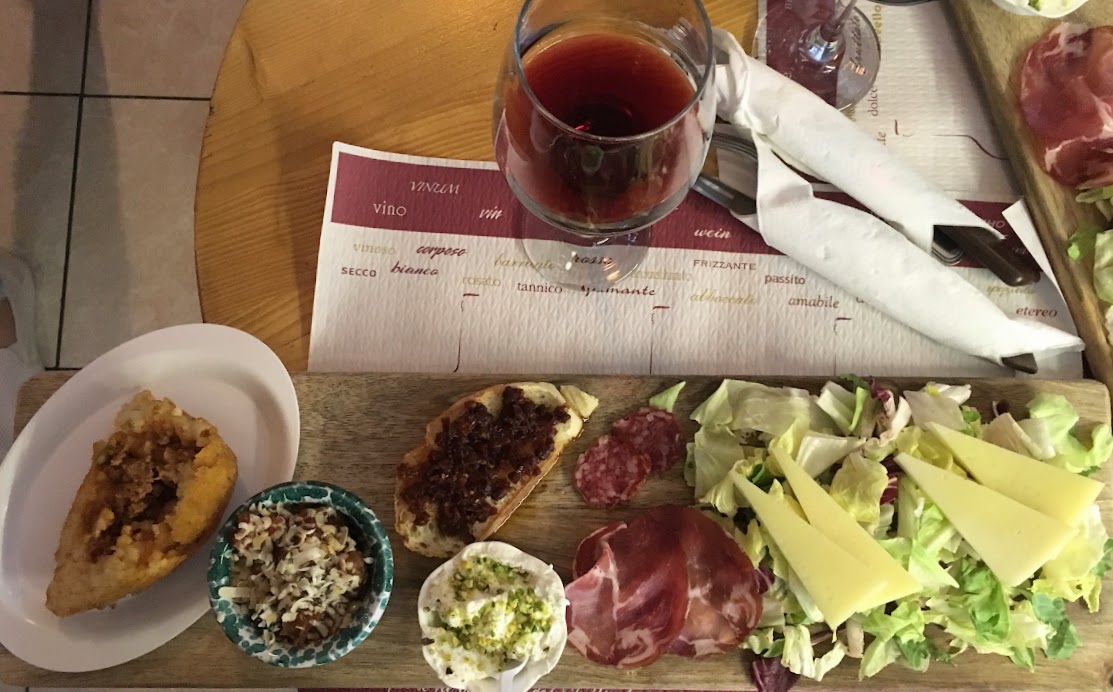 I was surprised to learn that Sicily produces a number of varieties of bold red wine. On this food tour we got to try a few different varieties: Nero d’Avola, Syrah, and Etna Rosso. The last two quickly became our favorite. For 10-15 euros a bottle, these wines are such good value! 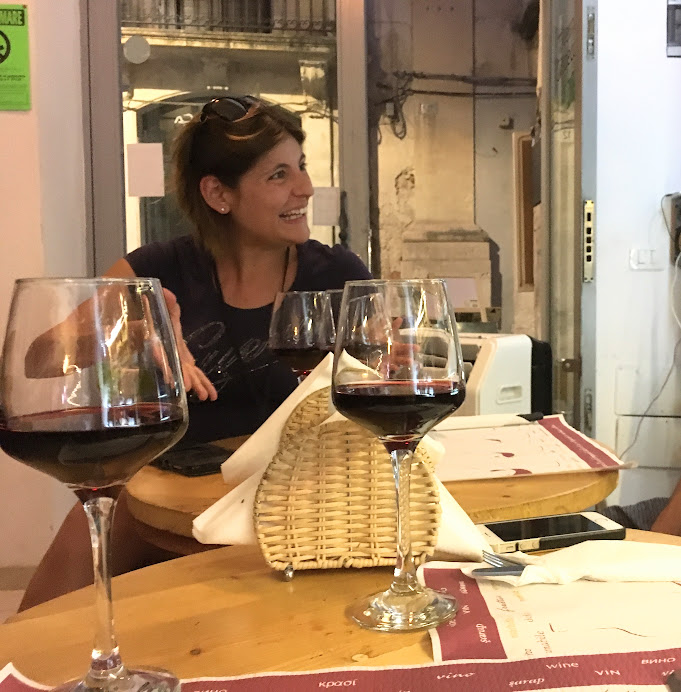 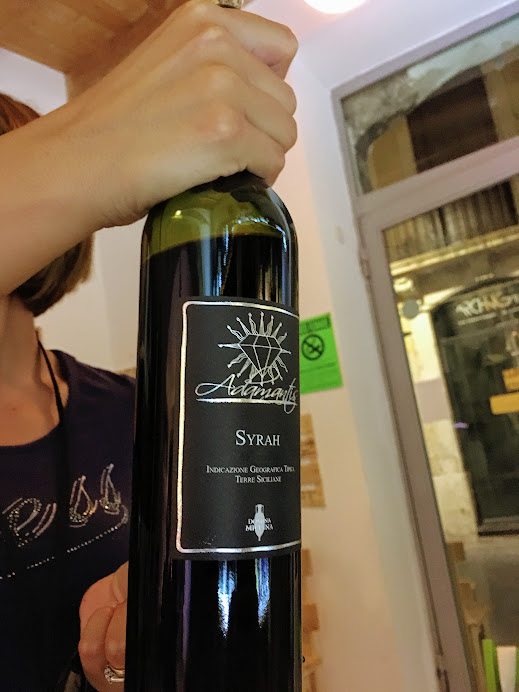 This local Sicilian Syrah came home with me. 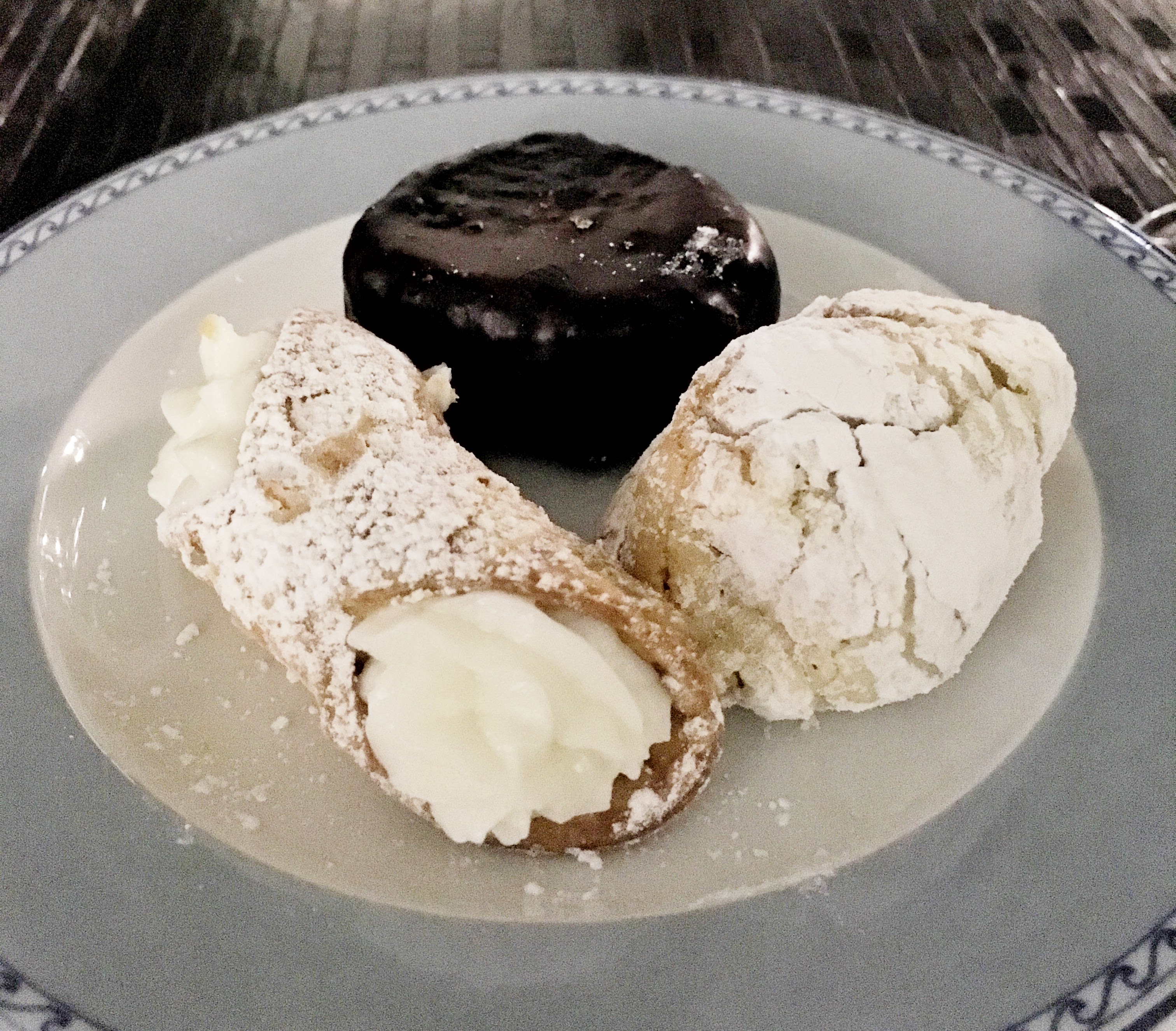 The last stop of the food tour was all about desserts. We slowly nibbled at the variety of house-made italian cookies and sipped on tasty limoncello and almond wine as the sky slowly turned inky black. I’m not usually a fan of sweet wines, but they went so well with the ricotta-filled canollo and the chewy almond cookie. It was a lovely way to end the evening.

For the best meal in Siracusa? Head to Macalle. On our first night in Sicily, we had dinner at Macalle and Jack would’ve been happy going back there again and again. It was that good. I insisted that we tried other restaurants because I have a case of the grass might be greener. But in the end I had to admit, no other meals compared. 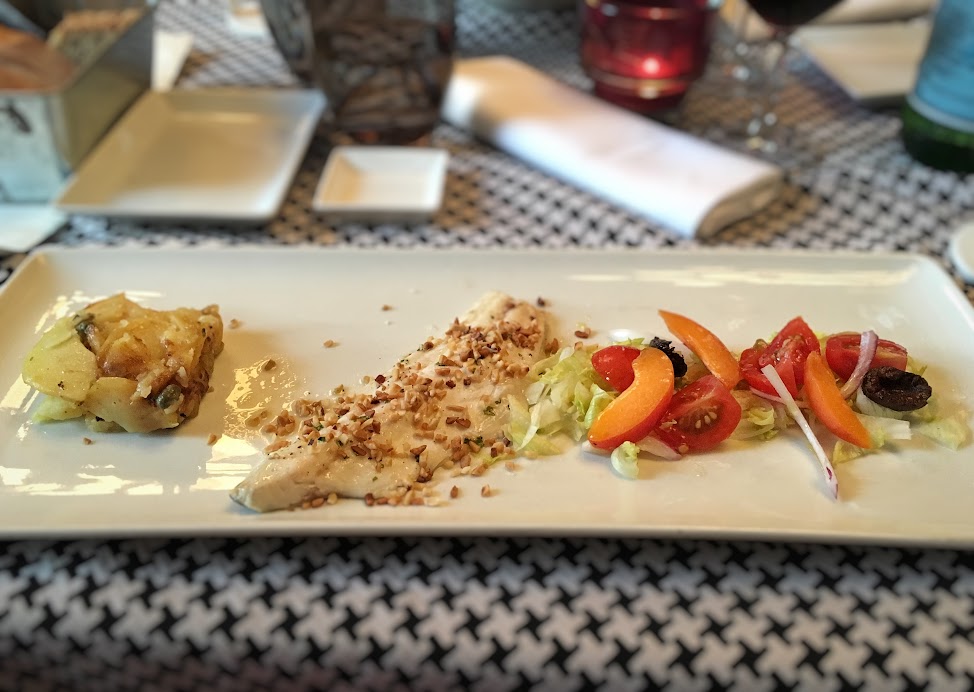 I love the location, tucked on one side of a tiny plaza away from the main crowds. I love everything that we ordered: pasta with Trapani pesto and scampi, the sea bass with chopped hazelnut, and mildly sweet and tangy panacotta at the end.

If you only have one day in Siracusa, I highly recommend checking out Ortigia market in the morning, get a sandwich from Caseifico Borderi or lunch at Macallè, followed by the Siracusa food and wine tour (starts at 6:30pm).

I’ve been to Italy a few times, each to a different region. Each visit confirms my belief that when it comes to food, you can’t go wrong with Italy. What do you think?

Ortigia vs Siracusa
Ortigia is a compact island connected to Siracusa mainland by a bridge. Most places of interest for visitors are located in Ortigia so I’d recommend staying on the island or close to it.

Where to Stay in Ortigia
Hotels in Aretusa Vacanze B&B is centrally located on the island of Ortigia. Some of the highlights include a roof terrace and wifi. Rooms start from $96 and include kitchenette and AC (so important in the summer!).

Recommended Tours
Food tour of Siracusa from Sicily Activities. Our guide was Elisa and she was the best – from warm personality to vast knowledge of local history and culture. And oh, the food was delicious too.

Tour of Mt. Etna from Catania: Unfortunately there’s no easy way to get to Mt. Etna from Siracusa unless you have your own transport (after seeing how Sicilians drive though I was like, “Nope!”) So we had to take an early morning bus to Catania bus station where we were picked up. We thought the Mt. Etna part of the tour was excellent, but the afternoon part was rushed. 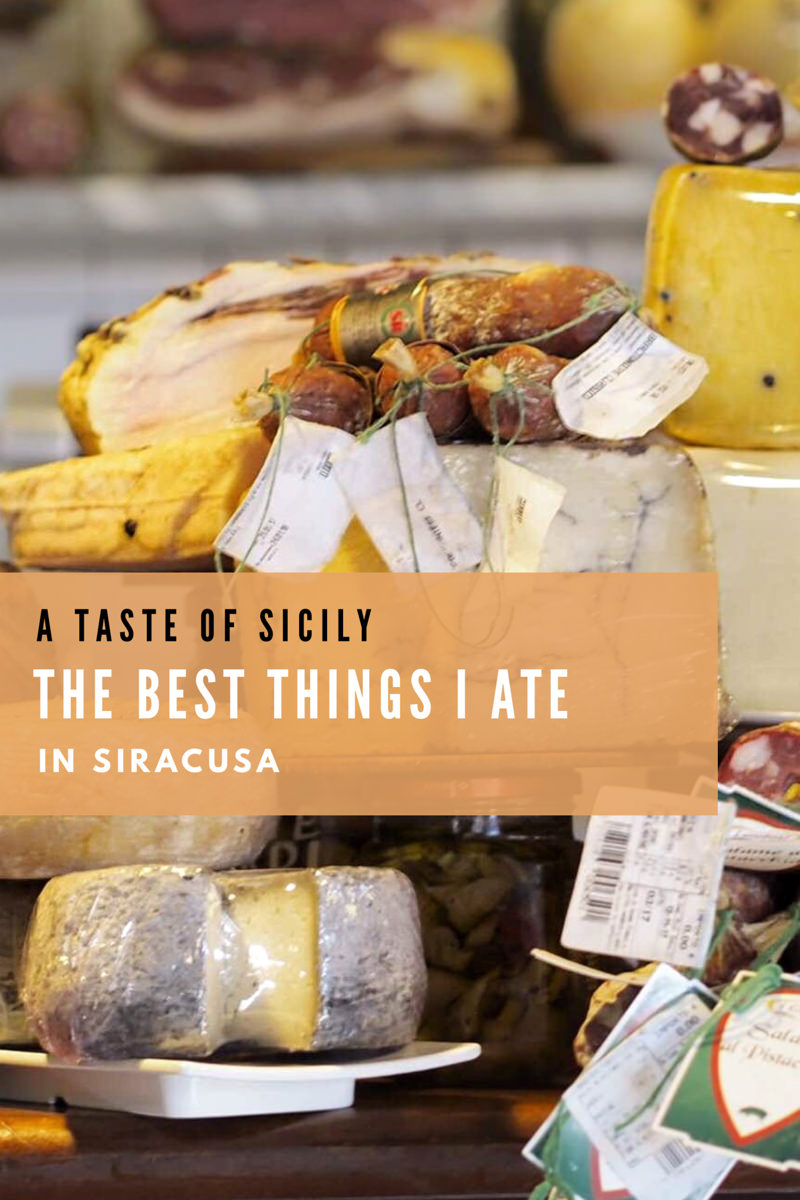 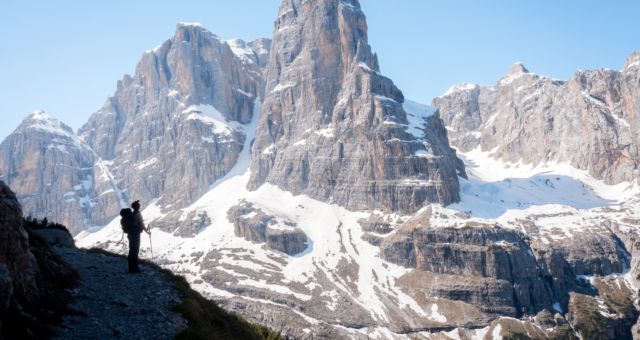