A Vegetarian Guide to Bulgarian Food

As a couple consisting of a vegetarian (reluctant pescaterian when traveling) and a picky eater, food is always a challenge when we travel.

Especially here in Bulgaria where meat features heavily in local cuisine. Everywhere I look, everyone is gorging on meat. Big pieces of meat. As in, what-animal-does-that-come-from big (on this trip I learned: pig knuckle is HUGE).

It’s even more so here because Bulgaria uses cyrillic. So even when we know the names of common dishes in the Balkan (like cebabcici – grilled meat sausages), we wouldn’t recognize the word in cyrillic.

The following is a list of vegetarian friendly dishes one can easily find in any Bulgarian restaurants. (Just FYI, this is not a guide on vegetarian Bulgarian food but instead a brain dump on our Bulgaria culinary experience.)

Bulgarian restaurants selling traditional food are called “mehana”. The word has a Persian origin and it translates, roughly, as “house of wine”. And yes, these traditional Bulgarian taverns do serve a long list of alcoholic beverages. Usually in the form of rakija (anise flavored alcohol) and vodka.

In Bulgaria, we ate a lot of bean soup. Every mehana offers different types of soup. The most traditional kind is tripe soup. We stick with the less intimidating bean soup. It’s filling, it’s vegetarian friendly* (not sure what kind of broth is used though), and at 1-1.50 euros a bowl, it’s cheap.

We’d eat it often with home made bread and it makes a great light but fulfilling meal. 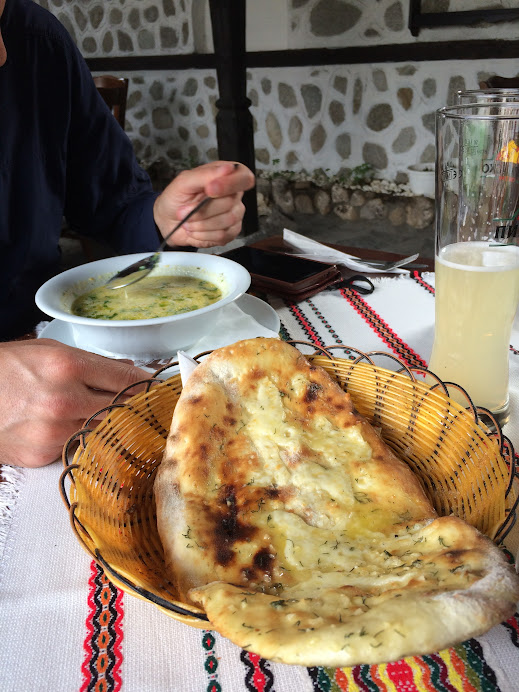 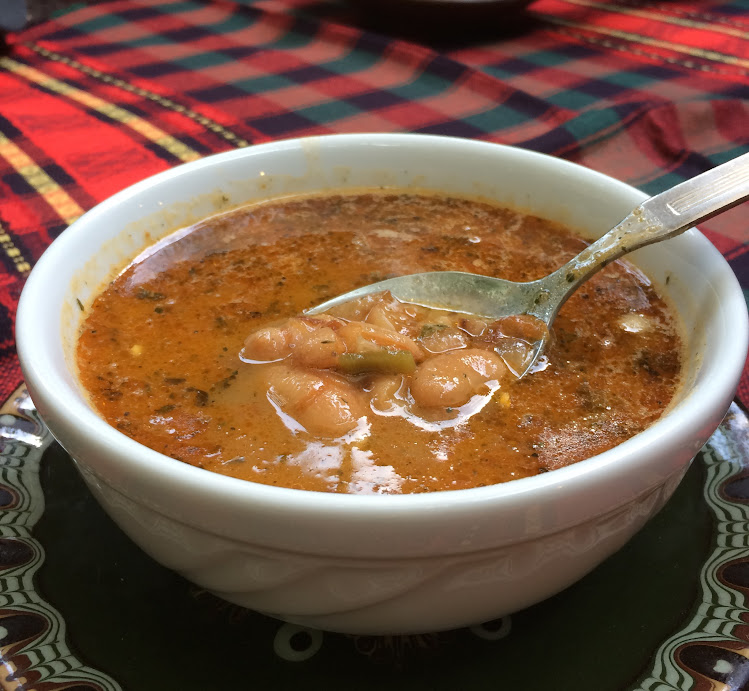 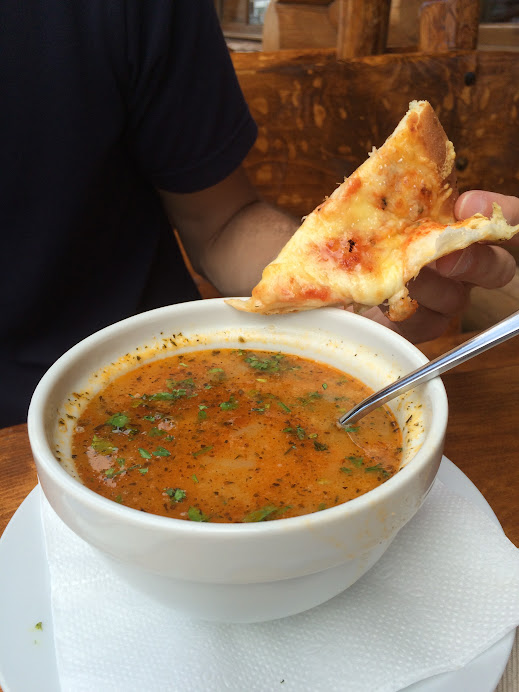 Bean soup with pizza? Jack says why not…

Bulgarians is big on grilled food. Mostly meat: lamb, veal, and beef. We stick to fish when it’s available. Our favorite restaurant in Bansko is a fish farm. They have little ponds where they keep trouts and carp. So the fish is always fresh. It’s super cheap too.

One restaurant we visited had a secret grilled veggies menu. It’s a secret menu because it’s listed as “chicken tile”. Imagine our confusion when they explained that “Oh, it’s for vegetarians!” How could something for vegetarian have “chicken” in the name? 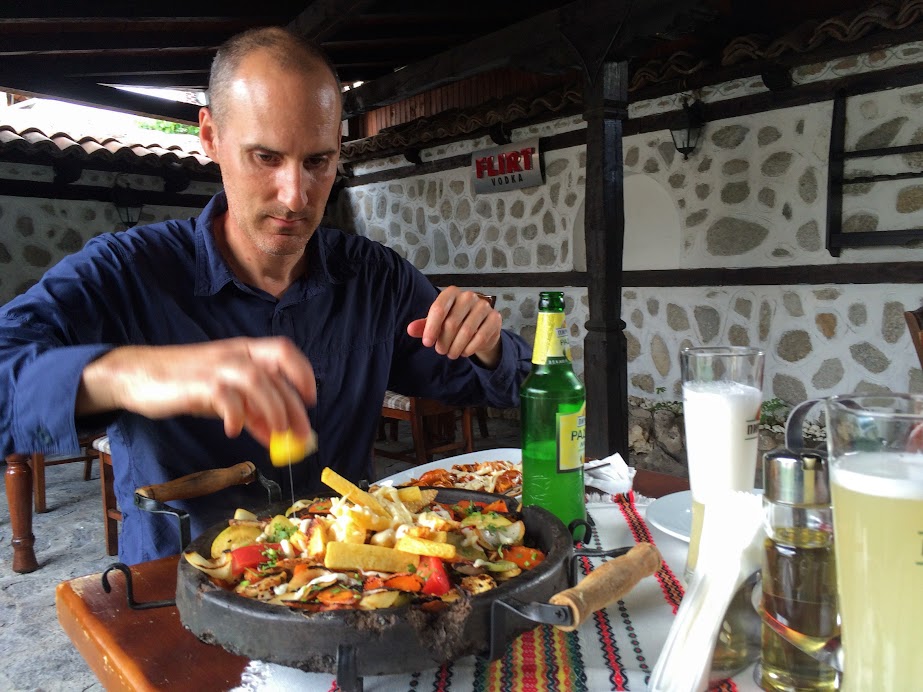 Monks Salad on the menu is described as “strained yoghurt, cheese, roasted peppers, and garlic”. I didn’t expect it to look like scoops of ice cream. I was expecting something with more… vegetables? I mean, it is supposed to be a salad, right? To be honest, I didn’t care too much for it. 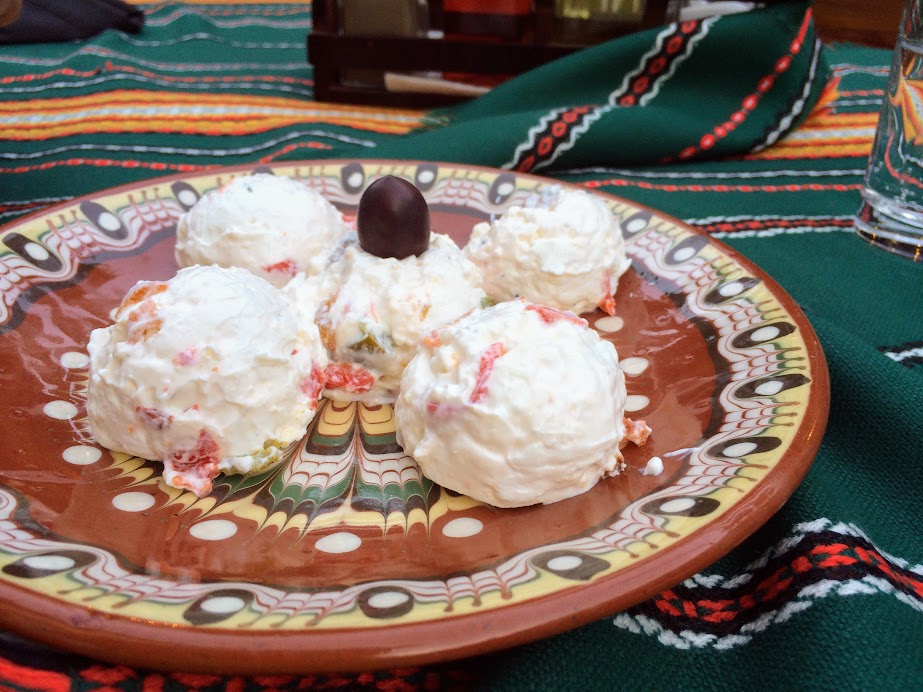 Tarator Soup was an item I got when I asked the waitress for something “traditional and vegetarian”. It turned out to be a cold, thing yoghurt-based soup with slices of cucumber and dill. It was interesting because in my head, soups = hot, you know? So it took me a few spoonfuls to break that association. 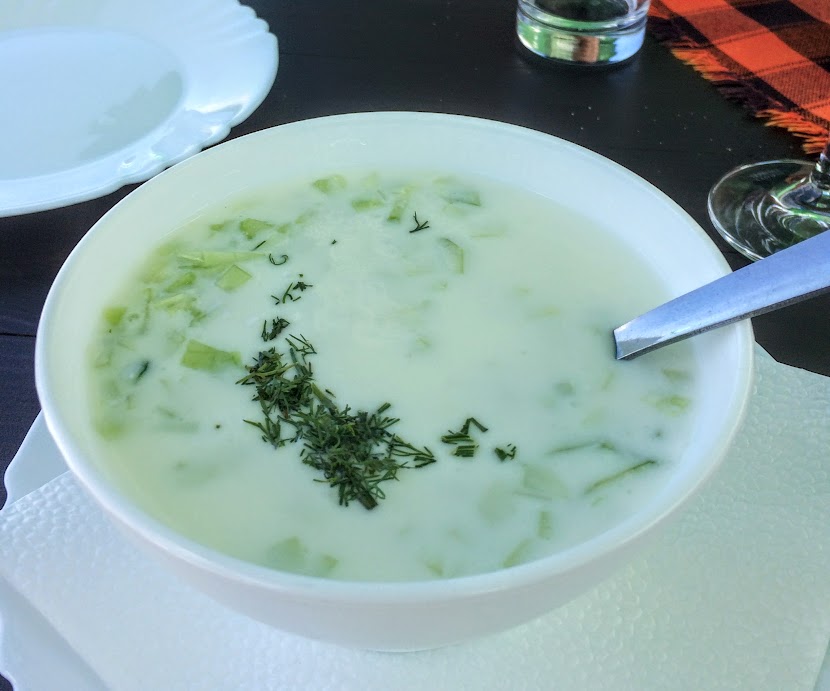 Cold soup? Perfect for summer but it took some getting used to.

You can’t talk about Bulgarian food without mentioning sirene. Bulgarians put sirene, local briney, white cheese, on and in everything. 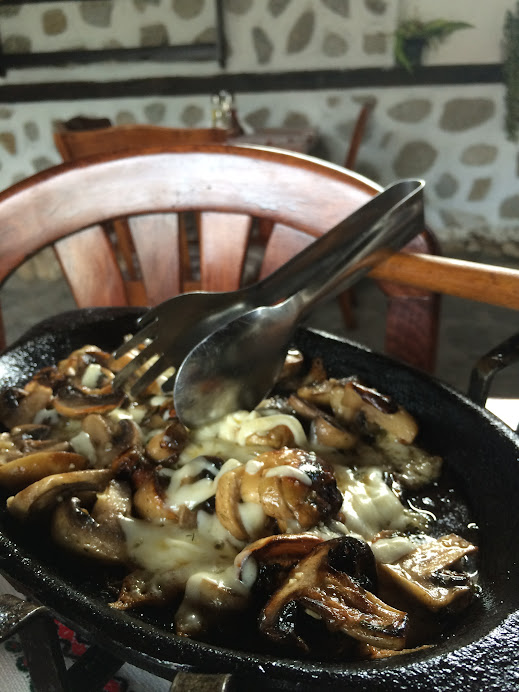 Sirene po Shopsky is probably one of my favorite Bulgarian traditional dishes though. It’s Bulgarian cheese (of course), with tomatoes, and eggs cooked in a clay pot. My second favorite? Lyutetnisa. It’s a widely popular spread in the Balkans made of tomatoes, eggplant, and garlic. It’s somewhat similar to ajvar. Even though they’re often made in house, it’s also available in jars. I love this on toast. SO. GOOD. 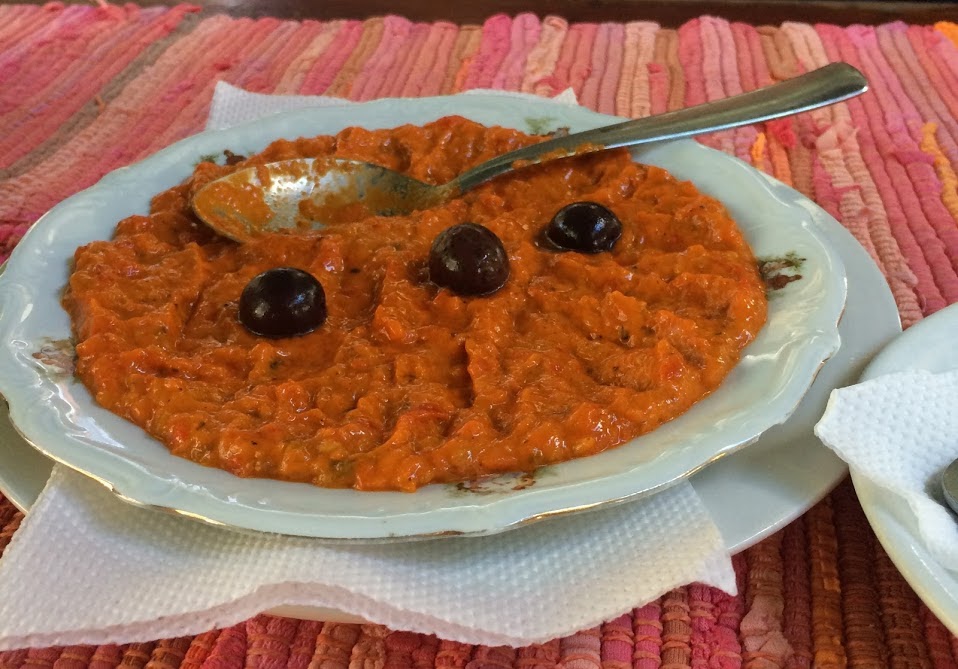 Banitsa reminds me of borek. A pastry type of snacks filled with cheese (and other ingredients depending on the region). I’ve had something similar in Turkey, Bosnia, and Serbia and I honestly can’t easily tell them apart. Banitsa, I assume, uses sirene cheese and tends to be saltier. Banitsa – borek like pastry stuffed with cheese and eggs. 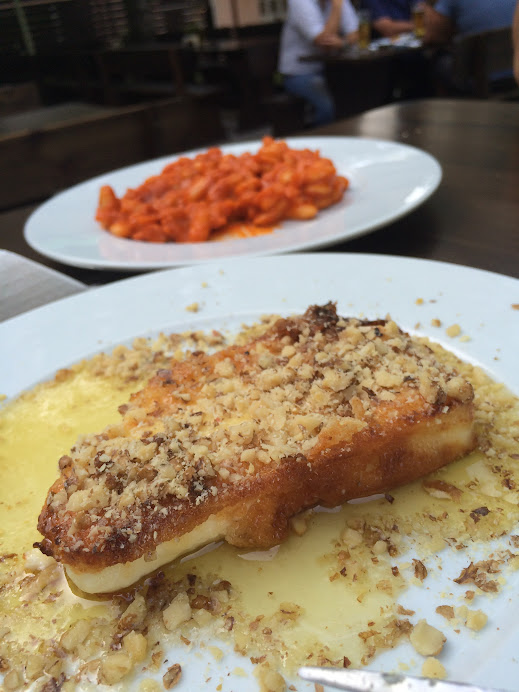 Cheese with honey and walnut. Filed under “appetizers” and is called “cheese plate”

The adventure of eating out when traveling

During our time in Bulgaria, eating out is always an adventure. You’ll never know what you get and it’s half the fun. So even though there’s plenty of hamburger and pizza joints, we always choose to go to a mehana. “We’ll see what comes out” becomes our mantra after we order.

I have no doubt there are other traditional vegetarian Bulgarian dishes that I would enjoy. But things do get lost in translation.

Jack has ordered a dish named “chicken village style”, that turned out to be stir-fried chicken. He’s also ordered “chicken parmesan” to have it served covered in pesto with a side of french fries. Nothing at all like what you’d think a chicken parmesan would be.

Of course when you order blind, it’s a hit and miss. To be honest, eating out in Bulgaria has been mostly a ‘miss’ for me. I don’t think I’ll specifically look for a Bulgarian restaurant after we leave. But the joy when I do find a hit, when I discover a dish that I just LOVE, makes it all worth it. (Khao soi in Thailand, Menemen in Turkey come to mind).

Discovering new foods is one of my favorite parts about travel.

One thing for sure when it comes to drinking, in Bulgaria the beers might be meh, but the wine never disappoints. 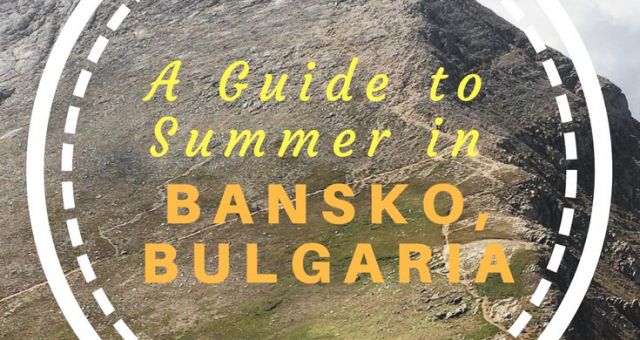