Things to Do: Taipei in 4 Days

On our last visit to my parents in Indonesia, I decided to break up our US – Jakarta flight with an extended layover in Taiwan. It turned out to be such a brilliant idea I don’t know why I never thought of it before, having flown San Francisco – Taipei – Jakarta many times. Instead of spending a bleary 10 hour layover in Taipei Airport, we had 4 days to relax, eat, and see Taiwan.

(Wait, how did we get from Bulgaria/Macedonia to Asia? We hopscotched a lot in 2016 and it’s a little complicated. Bear with me…)

I didn’t get to do everything I wanted to do in Taiwan: I had to back out of visiting Taroko Gorge, located on Taiwan’s supposedly beautiful eastern coast. It was at the end of our 3 week Asia trip and I was a little burned out of moving around. Plus it was supposed to rain the whole time. In the end, staying in Taipei was an easy decision to make. Even though I was bummed about missing Taroko, I have a feeling that I’ll be making this extended layover again. I’ll get to see Taroko, and the rest of Taiwan, someday in the future.

A night market in Taipei

There’s a long list of food Taiwan is famous for: from street foods to desserts. Many of these can be found in any one of Taipei night markets. Some like pineapple cake, bubble tea, and beef noodle soup are known all over the world. Looking back, we spent most of our time in Taipei going from one eating spot to another, following recommendations our foodie friends told us. I think considering that we’re both picky eaters, we did pretty good.

Taipei: Eat all the food

Oyster omelette – I really, really wanted to like this dish.

It was our last day and I was running out of time to try this most-Taiwanese snack of all. So I settled for a stand at the food court at the bottom of Taipei 101. I honestly didn’t know what to think of this dish of oysters, egg, and sweet potato flour. Actually, I do. It’s gross.

It wasn’t a dish I’d get again. Maybe I just got it from a wrong place? 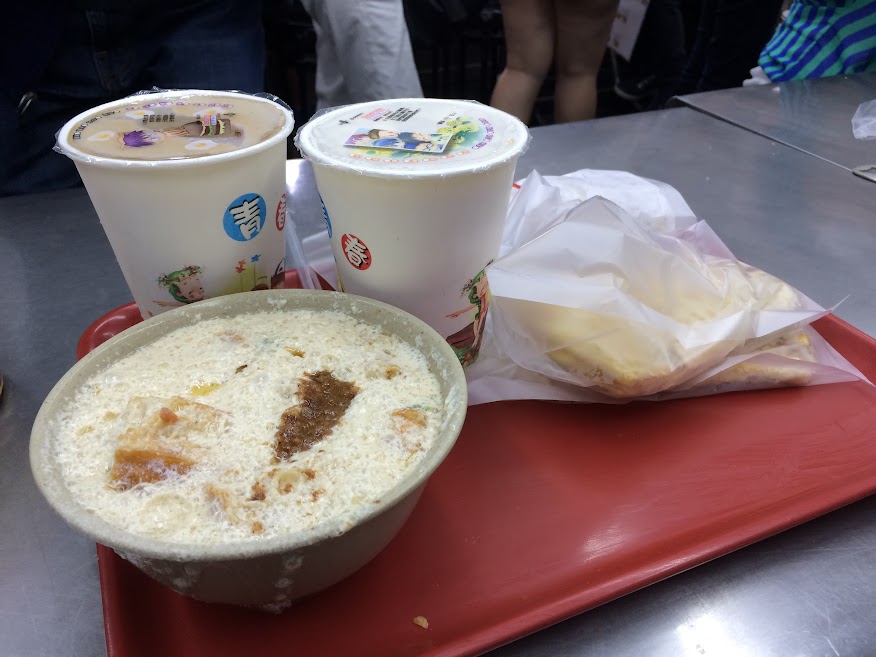 Yong Ha Soy Milk King is THE place to go to try Taiwanese breakfast. There’s always a line. (There’s a line for takeaway and a line for eat in – so make sure you’re on the right one). Ordering involved matching picture menus online with chinese-only order card.

I had a chinese donut wrapped in a thin egg omelette wrapped in a freshly-made pancake. Highly recommended is eating it topped with the chili sauce on the table. It was an artery-clogging breakfast that hit the spot on that particular rainy morning. Delicious! I made a mental note to seek a place that does this in San Francisco.

Jack had an egg pancake (minus the donut) that he dipped into a bowl of hot salted soy milk. The hot soy milk is served with dried baby shrimps and sliced chinese donuts. Addition of vinegar curdles the milk. It was definitely… interesting.

I also had the cold soy milk (it was good, but nothing special) and cold rice milk (Delicious! It was like a liquid peanut butter). 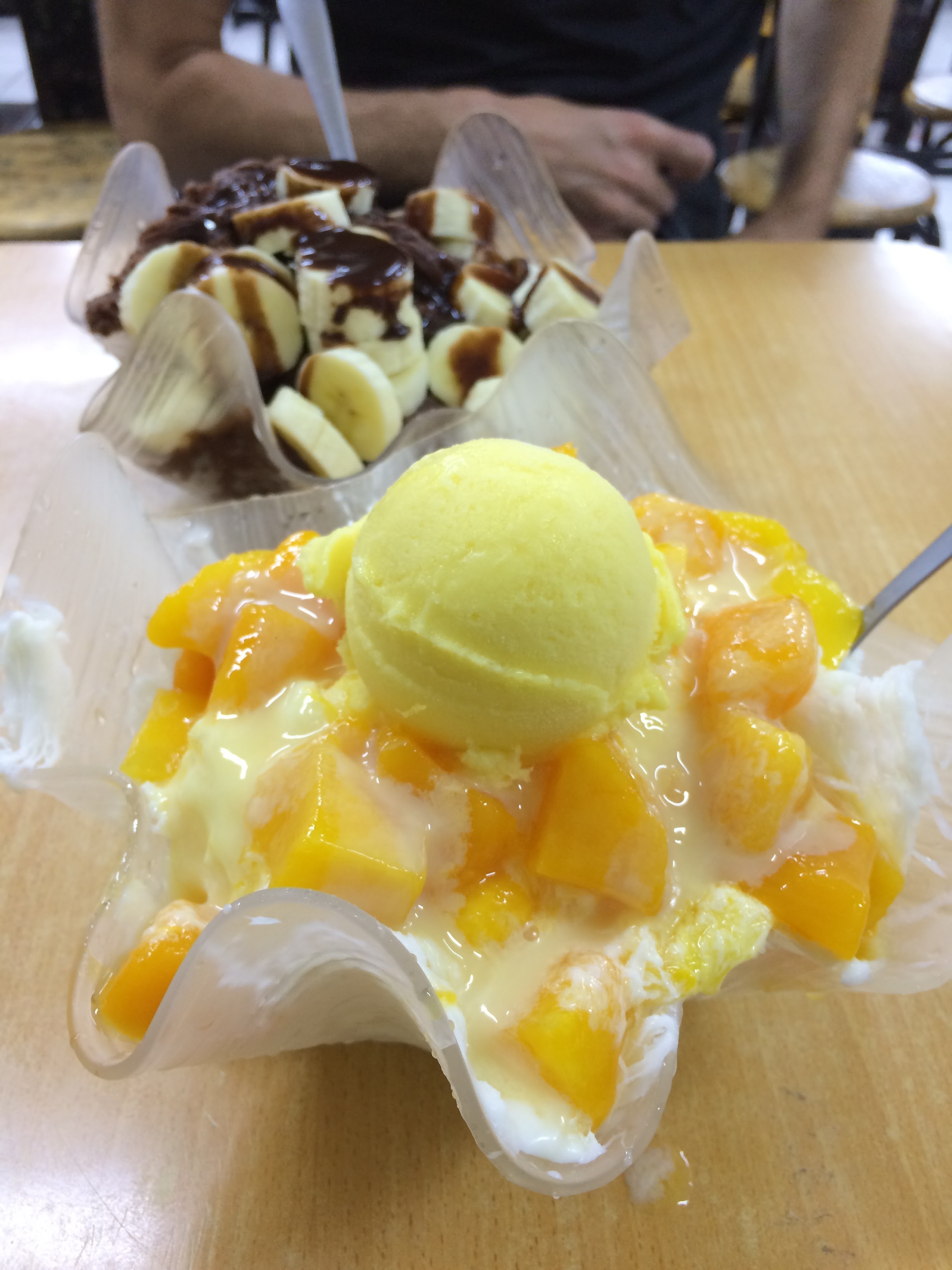 Visually impressive and it was actually quite nice. The ice is made of powdered milk, sugar, and water and it has a smooth texture unlike the Hawaiian shaved ice I’m familiar with. I’m not a big ice cream fan and lately I’ve gotten more sensitive to sweet (can’t stand too much of it – gawd, is this what getting old is like?) so I wasn’t able to finish it.

Would I get again? On a hot day, I definitely would! 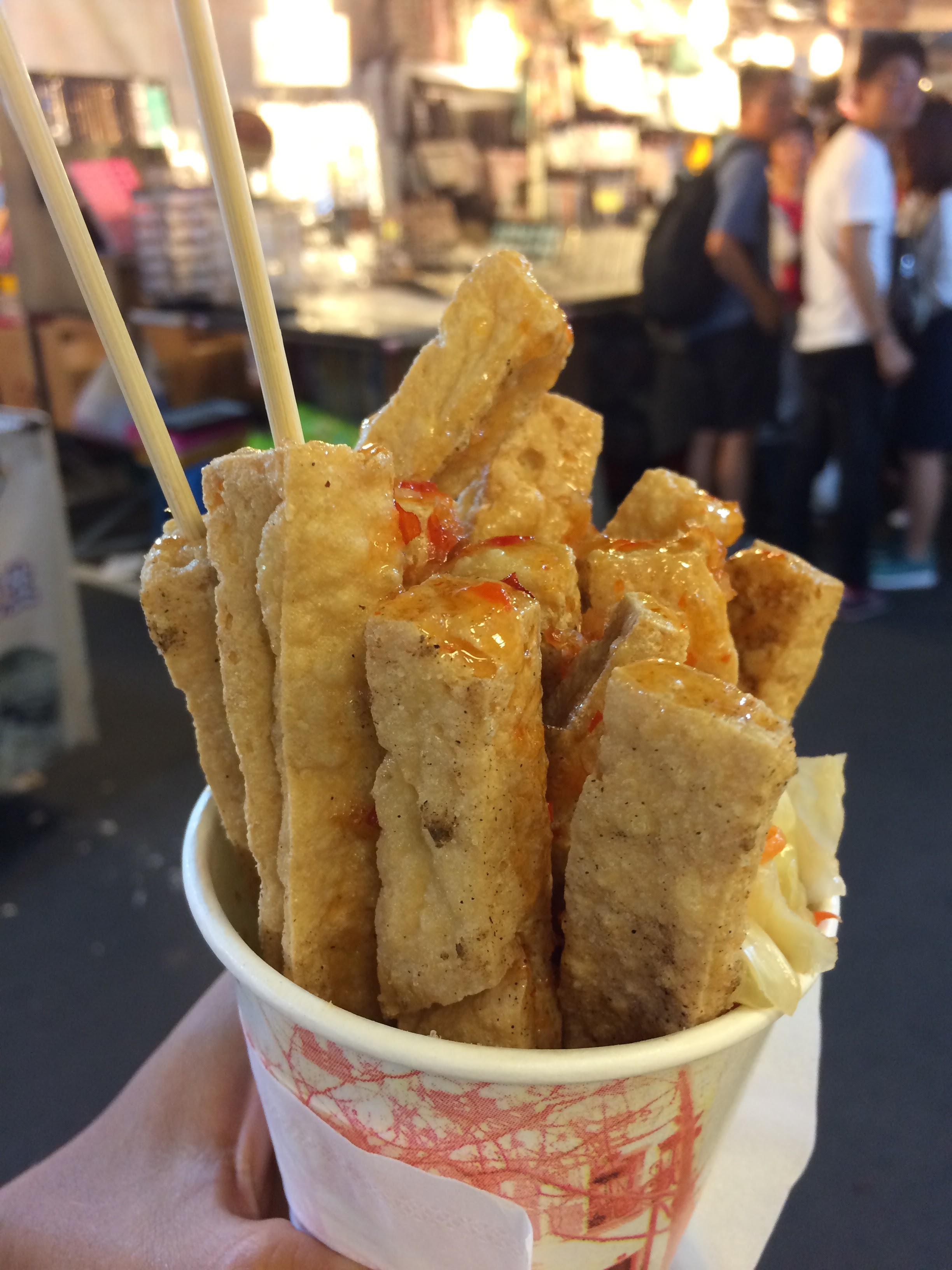 Stinky tofu with chili sauce from a night market

Not as stinky as I expected and the condiments it came with were such strong flavors on their own they mask the smell. I had it deep fried with Thai sweet chili sauce.

Would I get it again? Like other strong flavored food like durian, it’s not something I can eat all the time. But this is one of those dishes I can see myself going for once in a while.

Jack is not a fan. He quickly realised that the sewer-like smell he occasionally sniffed around night markets originates from stinky tofu stands and learned to avoid them. Which is an impossible task. Stinky tofu is everywhere. I think after awhile, you just get used to the smell.

I find the smell distinct, but not offensive. Then again I’m one of those people who think durian smells delicious. Only one way to find out which camp you belong to, find a stinky tofu stand and take a deep breath. 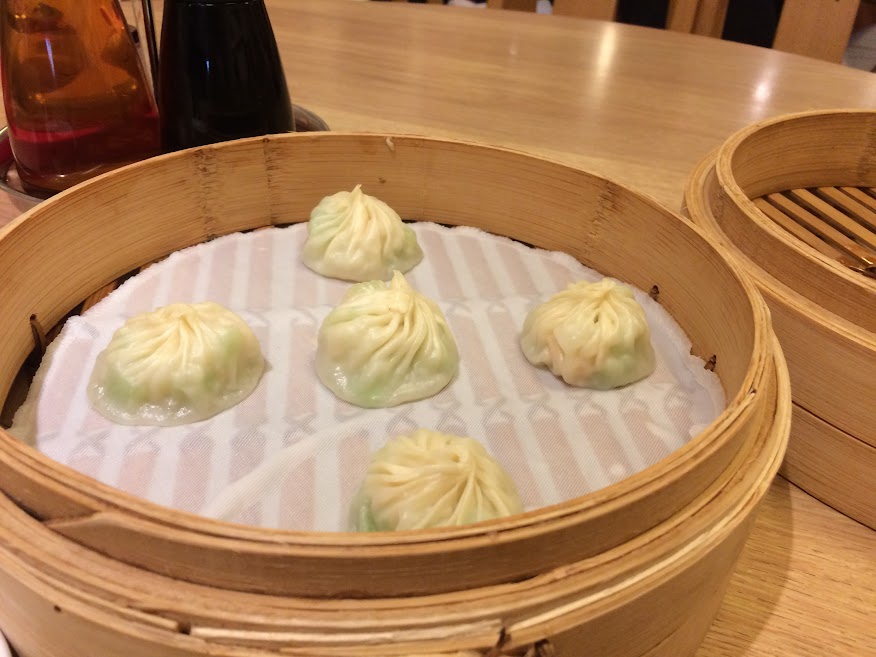 Xiao Long Bao, or soup dumpling, is my brother’s favorite dim sum dish in Jakarta. Unfortunately back home they are almost always pork based. Since I don’t eat pork I’d never tried them. Until now.

Din Tai Fung is a popular chain famous for their Xiao Long Bao and its original store in Taipei is always packed. Lucky for me, along with their traditional pork-based filling, they also have seafood and vegetarian. So vegetarians – go here and try their famous broth dumplings.

The verdict? I enjoyed them. Others might think the ginger is too overpowering, but I thought it was just perfect. It was light, and flavorful, and the dough is just the right thickness to contain the broth, but not so thick as to gum up the bite.

Night markets in Taipei is fun, hectic, and makes you wish that you had 4 stomachs. So, so, so many delicious looking food to try.

Find a stand with a long line and join the queue. Whatever it is they’re selling, it must be good! 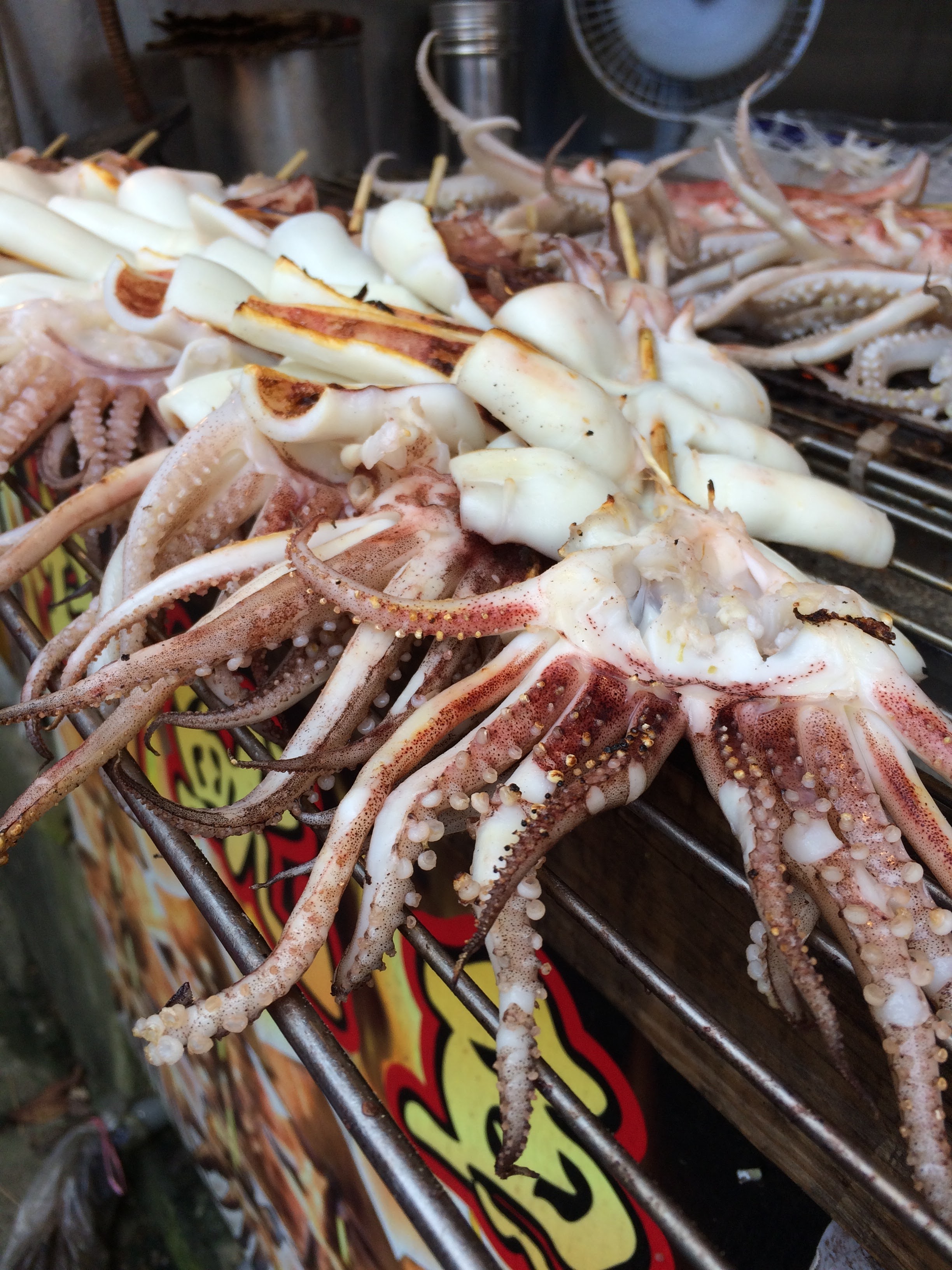 Tentacles on stick seen at a roadside stand, Taipei.

Food on a stick is my favorite kind. Not sure what those black squares are though. 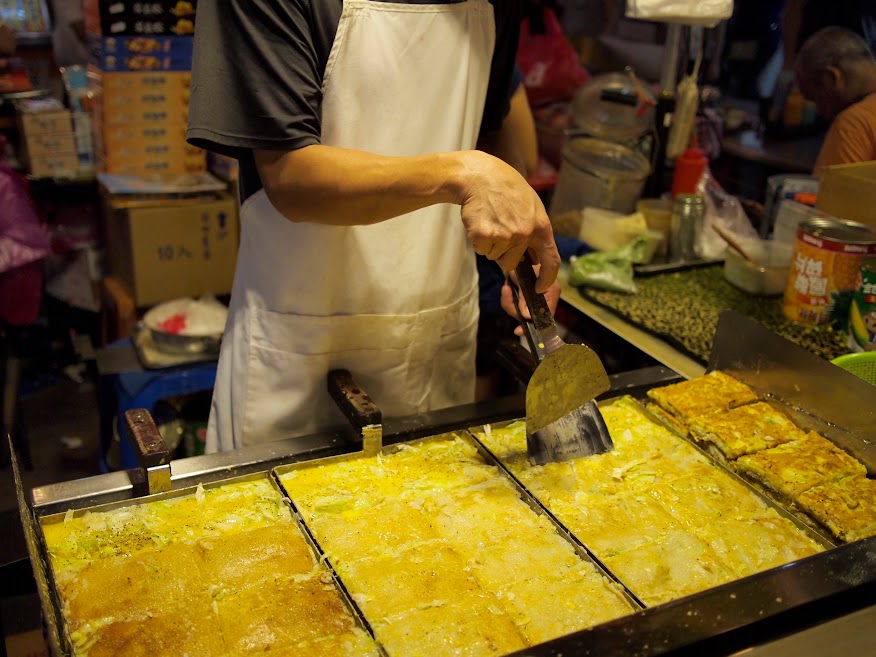 Visiting one of Taipei night markets is definitely a can’t miss experience.

Between all of these eating excursions, we did do other stuff in Taipei as well, you know?

Hike Elephant Mountain for the best view of Taipei 101
To burn off the calories, we hiked up Elephant Mountain, a popular sunset viewpoint with Taipei 101 in the foreground. Even in November it was a sweaty, muggy hike. Pro tip: bring mosquito repellant. We didn’t and we weren’t able hang around for sunset. I was being eaten alive up there.

A much more comfortable excursion is to go up Taipei 101 itself. Dwarfing all of the other buildings, Taipei 101 held the record for world’s tallest skyscraper for 6 years (2004-2009). 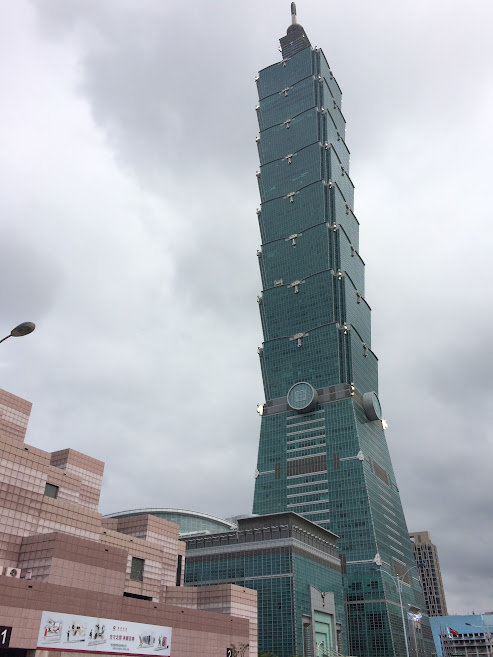 Going all the way up Taipei 101 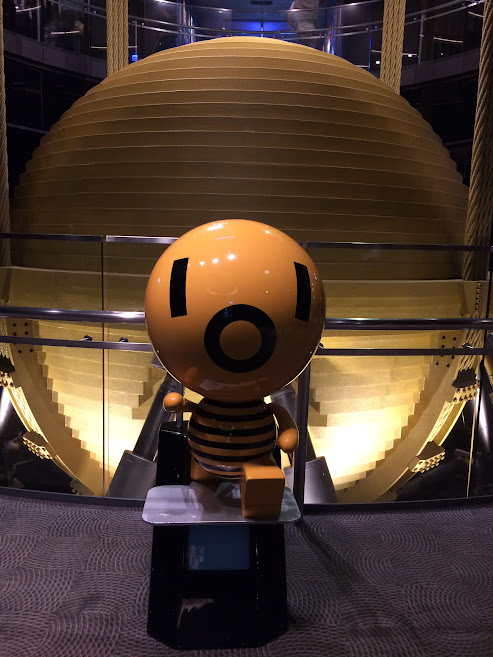 Geeking out over Taipei 101 mass dampener (the large sphere in the background), part of anti-earthquake system the building has.

We took a gondola ride to the Maokong tea plantation. On the way up, we decided to wait for one of the rare glass-bottomed gondolas. It didn’t cost extra, but it was about 30 minute longer to wait for it. Hard to say if it was worth it.

Despite, the rain it was a fun afternoon checking out numerous tea houses and partake in tea tasting. There are various hiking trails one can explore. It was hard to believe that the countryside lies a short subway ride away from hectic Taipei.

Even though we didn’t go out of our way to visit temples, we couldn’t help but running into them. On the way to a night market, we passed Baoan Temple. Temples in Taipei are impressive: a riot of colors, smoke, and lanterns with rooms after rooms filled with statues, carvings, and mysterious things… 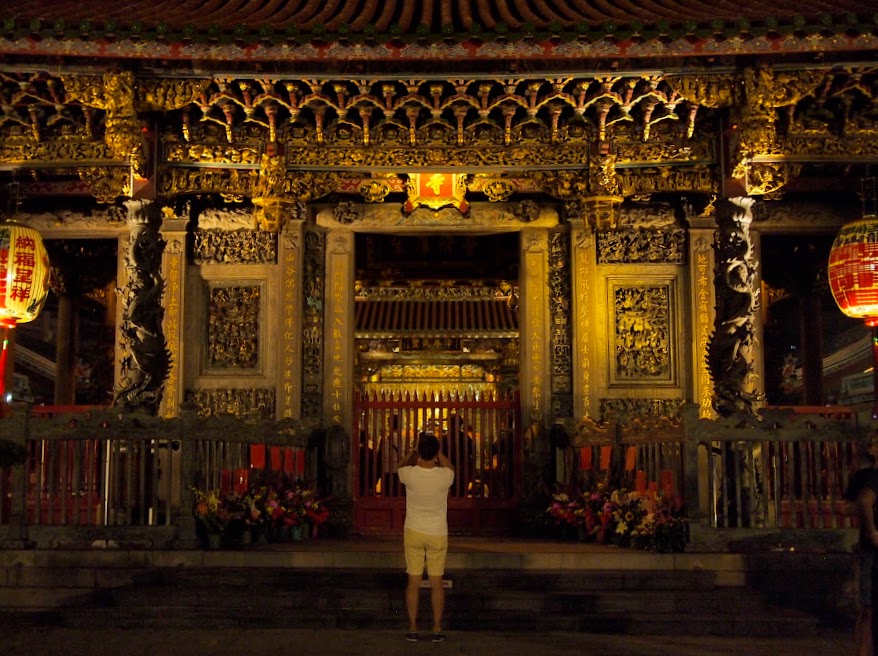 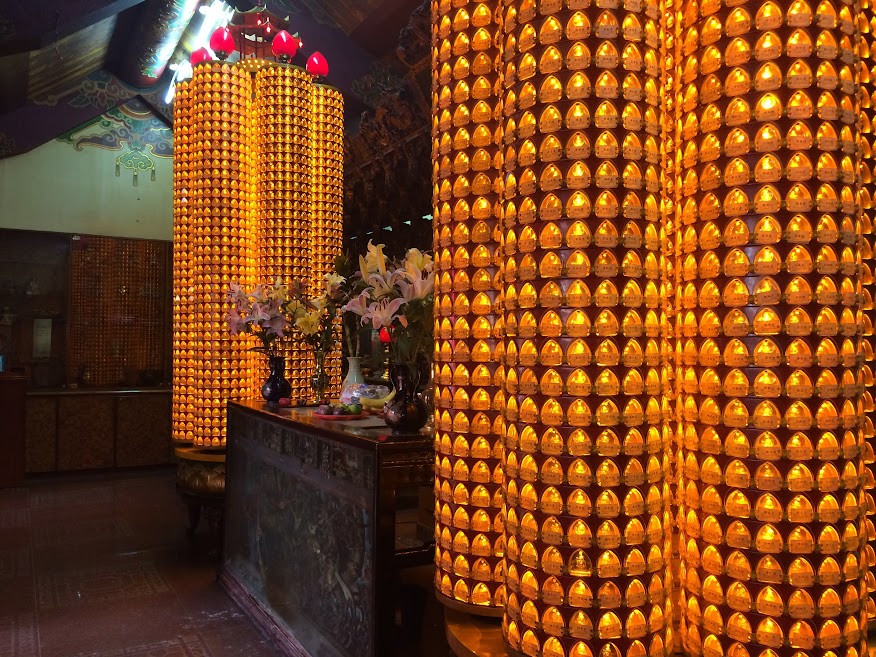 Rooms after rooms of these miniature, lit caves. Each with a statue inside. I have no idea what these are… 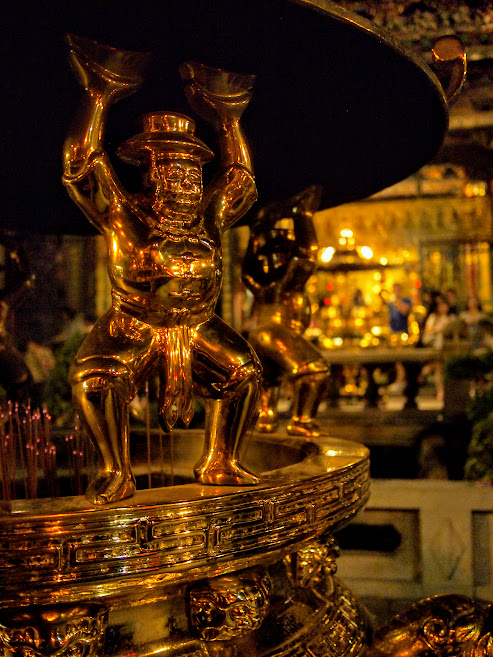 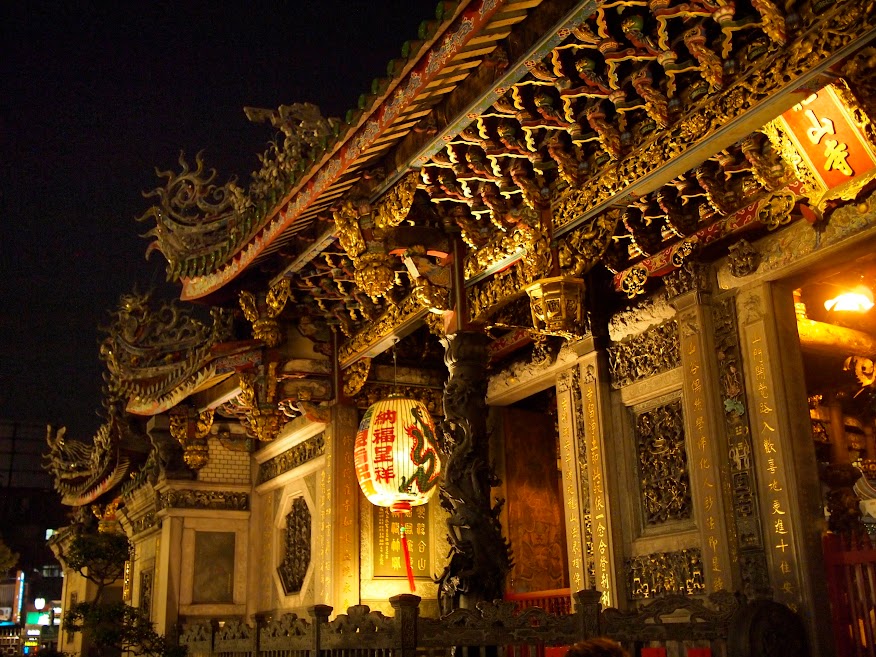 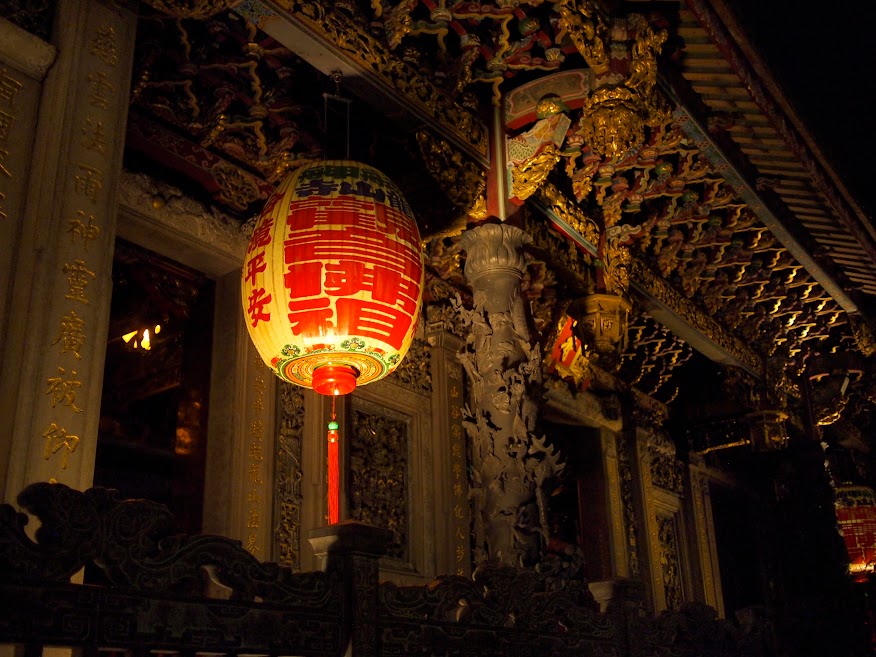 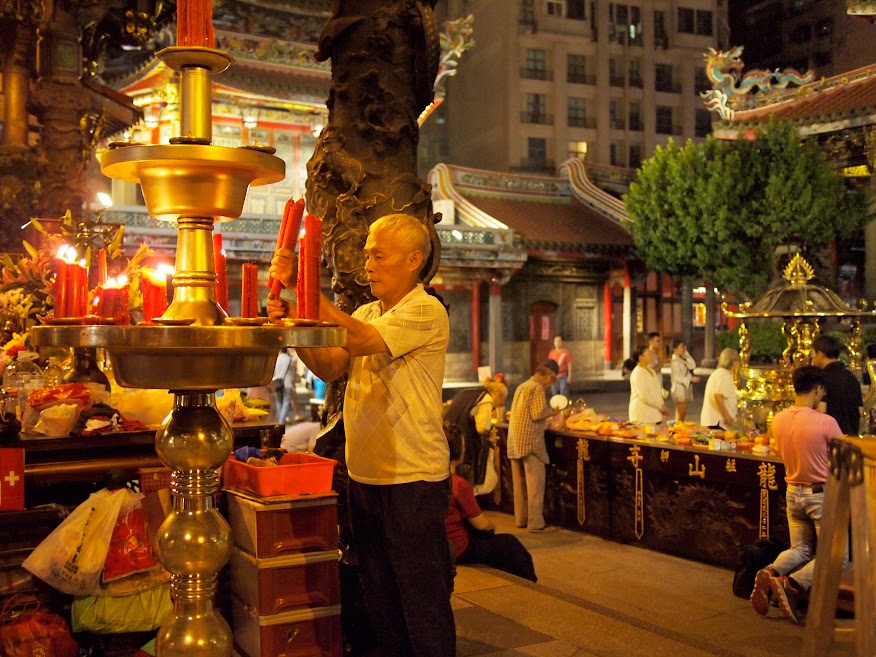 Taipei was a perfect place to do an extended layover. I’m looking forward to another one…

Taipei in A Nutshell

Food: food is a plenty and cheap.
Transportation: fast, efficient, cheap, and anglophile friendly. A 24 hr Metro pass is NT$150 ($5). Why can’t the US have something remotely like this? It makes me mad with jealousy.
Accommodation: we stayed in an Airbnb in Zhongshan and then moved to another in Zhongzheng district. Honestly, as long as it’s close to a metro station, it’s all good. There are also gazillion hotels in Taipei at any budget. Need to find budget hotels in Taipei?
Beginner friendly destination? Absolutely. With its modern infrastructure, varied food options, high concentration of Western chain (Starbucks and 7-11s are everywhere), and high-tech savvy urban demographic, traveling in Taipei is a cinch.
Facebook Twitter Pinterest