Baños is known as Ecuador’s center of adventure activities. You can do anything here as long as it involves climbing up stuff and falling down stuff. And if it involves water and volcanoes, it’s even better.

We felt right at home there.

Here are some of the things we did that we’ve survived: 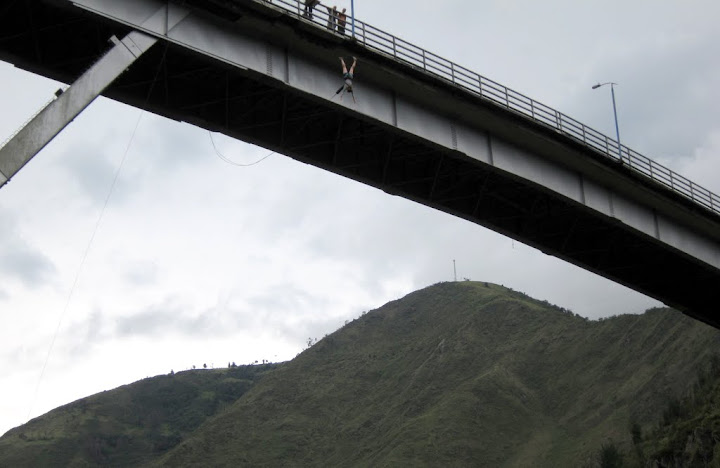 We managed to capture a friend of ours mid-air

When I posted this video of Jack jumping from a bridge, some people referred to it as bungee jumping. I should clarify.

This is not bungee jumping. There’s no spring-action to the rope.

Imagine that you’re on a bridge. The rope is attached to the left hand railing, wrapped around the underside of the bridge, and attached to you who’s about ready to jump on the other side.

Think of the result as a combination of jumping and tree swinging. 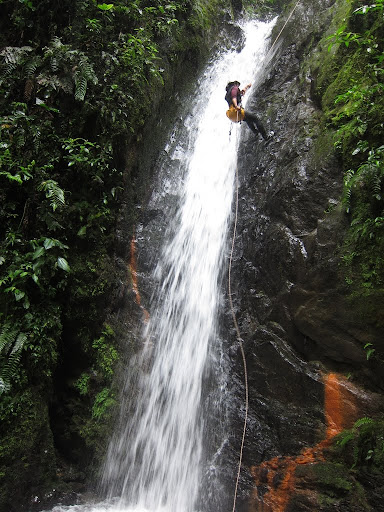 It’s probably a good thing that it’s not super cheap, and it’s been cold and rainy half of the times we were in Baños. Or else I’d do this every single chance I’ve got.

Canyoning is SO MUCH FUN.

Funner than caving. Scarier too, even if it doesn’t include swimming underwater in total darkness.

Baños offers different rivers for canyoning – Chamana, to Rio Blanco, to Cashaurco. We wanted to do Caschaurco because it combines rapelling, jumping and zip lining, but the river was running too high from all the rains so we went canyoning in Rio Blanco instead.

Regardless of the river you choose, I’d never met someone back from a canyoning trip with a dour face.

I forgot how fun rafting can be. 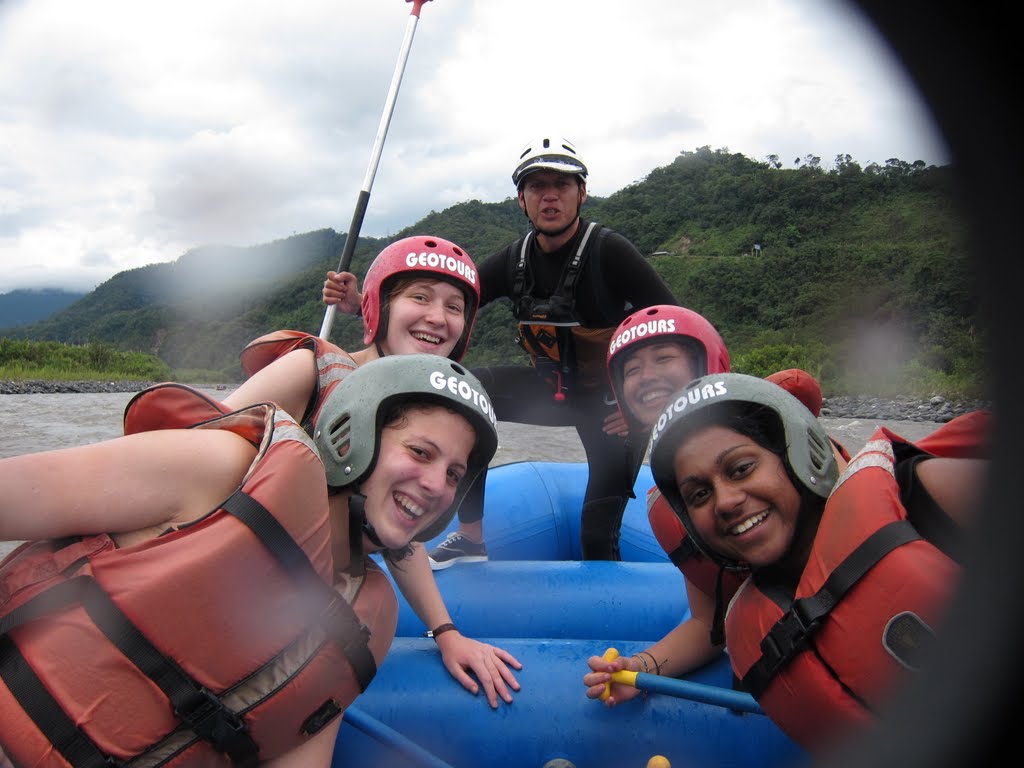 And for someone who can’t swim (yes, I can’t swim), that says a lot.

And even when our guide kept trying to overthrow the raft on purpose, I still managed to have fun (mostly because I didn’t realise what he was trying to do at that time).

Pastaza River is a class 3/3+ river and it was challenging enough to be fun for novices. But if we’d ever do it again, we should be ready to try a more challenging one. The only form of biking that we like is downhill biking. And in case you haven’t figured it out, we love being around mountains.

So when I heard that biking downhill Cotopaxi, one of the 30 or so active volcanoes that Ecuador has was an option, we were like ‘Downhill biking? On a volcano? Where do we sign up?’

First we drove as far up as the road allows. There we got dropped off with our bikes, helmets, and gloves.

And off down the volcano we go!

Then we realised that the brakes on the bike don’t work very well. Which kind of sucks since it was… well, kind of steep.

Whizzing/sliding/careening out of control past the paramo landscape at the foot of an active volcano on shitty bikes turned out to be a lot more fun than I expected. Thankfully there weren’t that many cars around. Although trying to avoid a few that were there made the ride just a tad more exciting.

And a very pretty experience too.

But it was over too quick too soon. All good things seem to end too quick. 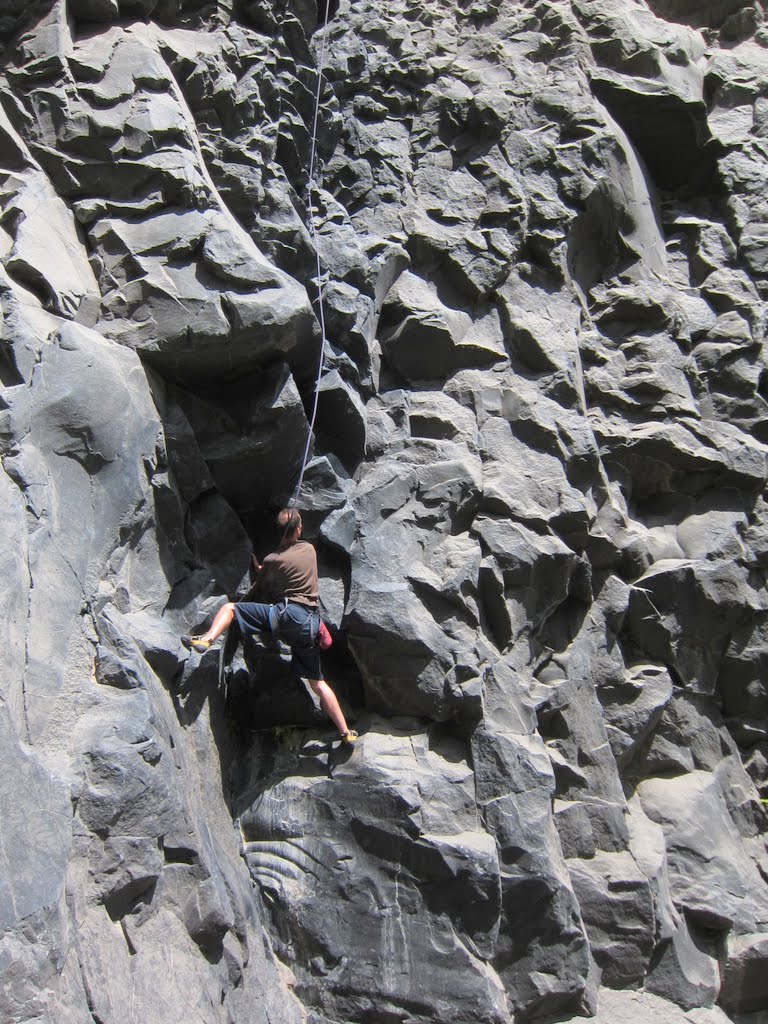 We finally got to use our harnesses and shoes in Baños after 2 months of carrying them around in our packs.

You know the great things about rock climbing in Baños? Back in California, we had to drive for at least an hour, but here you can walk to the climbing sites. Yes, walk. The sceneries don’t fail to impress either.

The routes here kicked my ass. They don’t officially rate them, but I’d say the easiest one is a 10/a.

But it doesn’t matter. Baños was a great place to get our climbing fix before we get to Huaraz, Peru.

Teaching English and Playing With Kids – Every Day

When we first signed out with Arte del Mundo, we didn’t really know what to expect. Jack looked at me and said, ‘Working with kids? Really? What do we know about kids?’

Not much really. Rats? Plenty. We used to have them as pets. Cats? We fostered cats in our apartment. Dogs, birds, guinea pigs, rabbits? Sure.

But kids… Aren’t they full of germs? What kind of side effects would we get from being around them every day?

But it was the first of many times when blurting ‘yes’ to an opportunity without thinking too much has turned out for the better.

I’m not saying that there were not any moments of, ‘Uh oh – what do I do now?’ but the majority of the time the kids are simply… wonderful.

We loved our times there.

Although, even we did survive our times there, can’t say the same thing about Jack’s dignity: 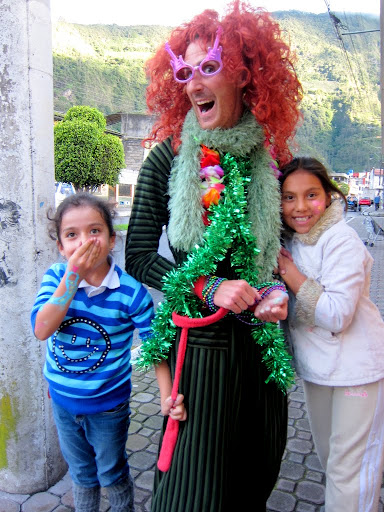 Going Out Every Night 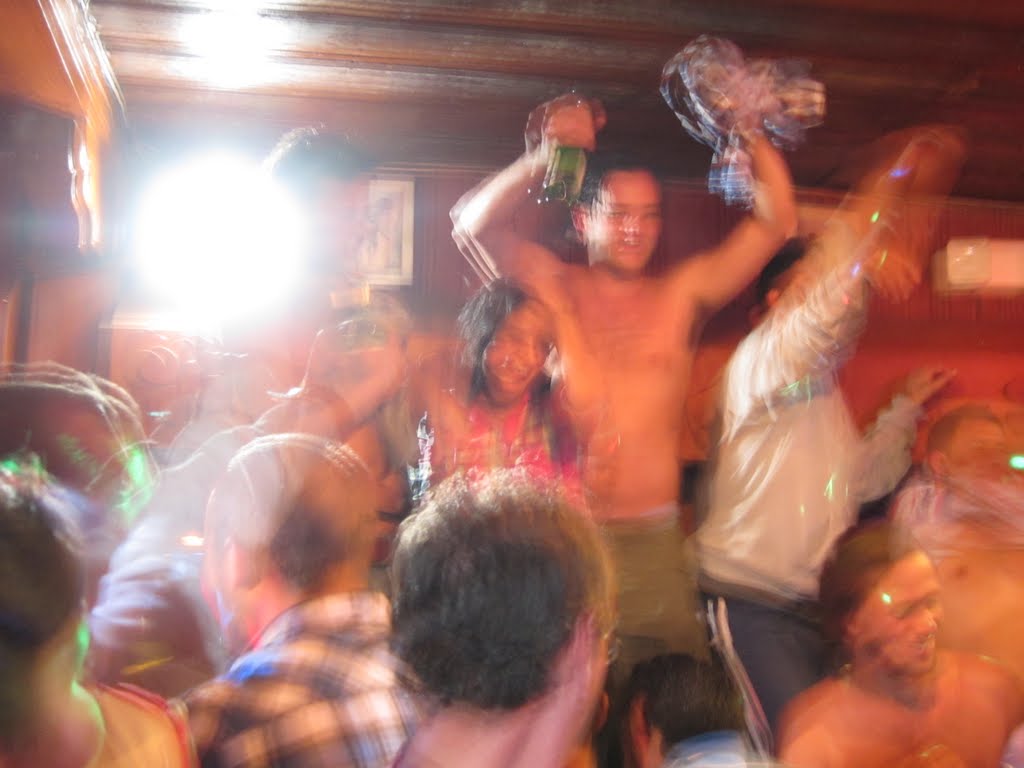 At our age, going out every night until the bars are closed should’ve at least done some permanent damage to our bodies, if not our pocket lining.

Fortunately:
1. Beer here is cheap ($2 for a large bottle of beer).
2. Sharing your beer with your friends (because they come in such large bottles) is a custom here. So often, buying one beer a night is enough when you go out with friends (don’t forget to return the favor next time).
3. We have no problems to just hang out, dance, and stay dry. Boring I know.
4. All bars close at 2 am.
5. All bars close on Sundays. I loudly complain with the others over fact #4 and #5, but secretly glad that at least that gave us time to rest.

But believe it or not, the most dangerous thing that got our adrenaline pumping more than the others?

Riding your bikes down the road from Baños to Puyo pass the many waterfalls along the way is one of the most popular tourist activities.

Over all of the jumping and climbing, I’d say this is the most dangerous activities we’ve done.

Riding next to the main freeway is never my idea of a good time. Especially when there’s no shoulder for the bikes to ride on.

I personally wouldn’t do this again. Not that it was not fun. Or the view was not pretty. 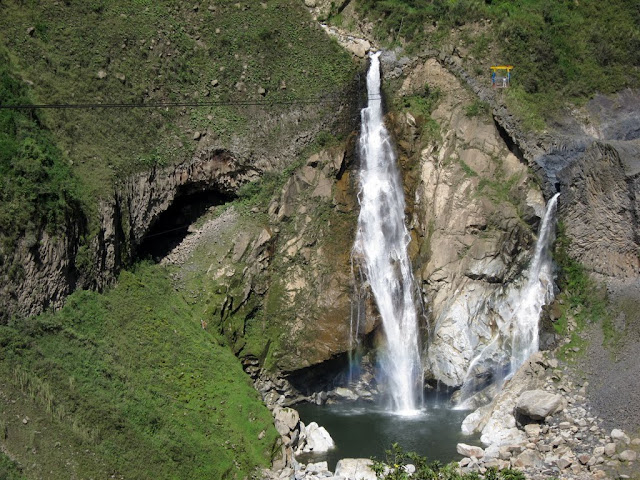 But half of the time I was afraid I’d get hit by a passing car. And there were A LOT of cars. They all seemed to like to get really cozy with the bikers.

I’d really rather jump off a bridge.

Having said that, our final destination – the waterfall, El Pailon del Diablo (the Devil’s Cauldron), is totally worth a visit.

And if riding bikes next to a freeway isn’t your thing, you can take a bus for 25 cents there.

—
Phew! Just writing about that got us all excited about our upcoming adventures in Huaraz – supposedly Peru’s capital of adventures. Plenty of trekking, climbing (both mountain and rock), and who-knows-what-else is in store there.