Since I know most of our readers are not climbers, I’ve refrained from writing much about our climbing trips. But when a trip was particularly exceptional, I couldn’t help but sharing it.

Climbing Half Dome in Yosemite is one of those trips. The location, the view, and the journey are worth sharing. Those who have been to Yosemite National Park will be familiar with this iconic feature in the park. Many might have even hiked to the top, a grueling 16 mile round trip that rewards you with one of the best views of Yosemite Valley.

A couple of weekends ago, Jack and I came to Yosemite on one of those “let’s just go and see what we’ll feel like doing” trips, having been invited by a friend to share his campsite. Of course we brought our climbing gear along – just in case, right?

My idea for the day was to wake up early and take pictures. Maybe, just maybe, go on a hike. I was going for a relaxing day in one of my favorite National Parks.

Jack had a different idea, “Let’s hike Half Dome!” The cables were still down, so no permits were required and no crowds would be present.

I hummed and hawed. We’ve hiked up Half Dome twice and I remember a particularly boring stretch in the trail that involves a long slog uphill on switchbacks. Not something I’d care to repeat for the 3rd time.

Then one of our friends chimed in, “Why don’t you guys just climb it? It will be a shorter hike.” Snake Dike is the name of a climbing route that goes up Half Dome from the opposite side of where Half Dome’s cables are. It’s named so because it follows a dike that snakes its way up the dome, creating positive holds for climbers to grab onto on an otherwise blank granite. 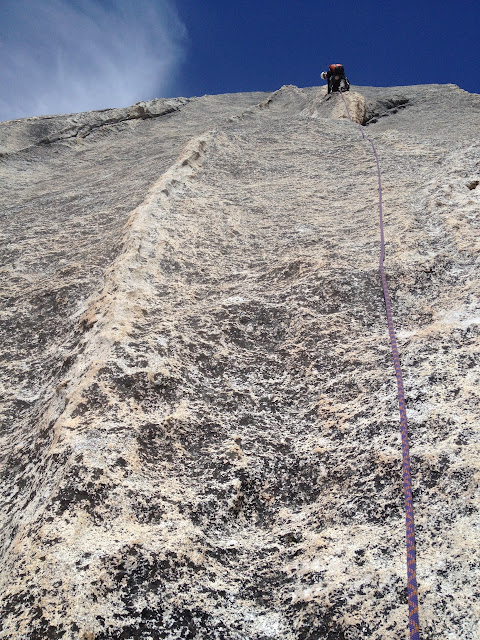 The dike of Snake Dike

The route isn’t particularly difficult, but it has long stretches of unprotected climbing; during these parts the climbing is super easy, but if you fall, you’ll fall a very, very long way ( > 150 feet) and possibly get seriously hurt.

I have many climbs on my climbing bucket list but Snake Dike was one of them. Being somewhat of a lazy hiker I’ve discarded it as “too long of an approach”. So I’m still not sure what made me agree to do it. Then again, it was 5 am in the morning and good decisions are not often made that early in the morning. 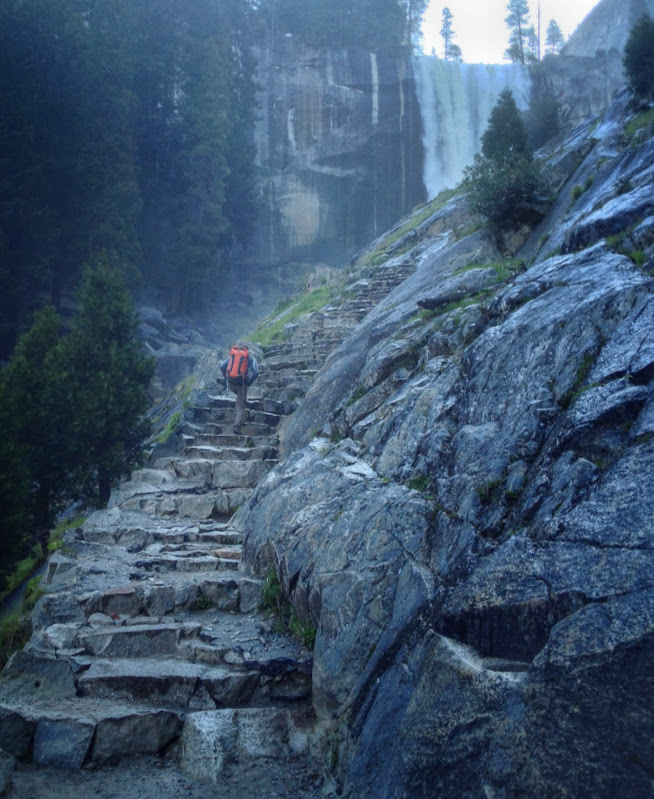 The first part of the trail was familiar as we trudged up the rock steps of Mist Trail past Vernal and Nevada falls. We were the only ones on the trail – the sun wasn’t even fully up. The waterfall was at its fullest, fed from recent snow melt and we were soon drenched from the mist.

Shortly after we reached the top of Nevada Fall, the climbers trail veers left, goes past Lost Lake and we started scrambling towards the left side of Half Dome where Snake Dike starts.

After some scrambling over manzanita bushes and getting freaked out on exposed slabs (before wisely decided to skirt around it instead), we reached the start of the route. This is where we found out that every climber in the Western hemisphere had decided to climb Snake Dike today.

There were 5 parties ahead of us and soon 4 parties showed up. Ok, maybe not every climber in the Western hemisphere, but it was pretty busy. We spent time waiting at the base of the route solving riddles. One of the riddles is posted below – just in case you’re into them. 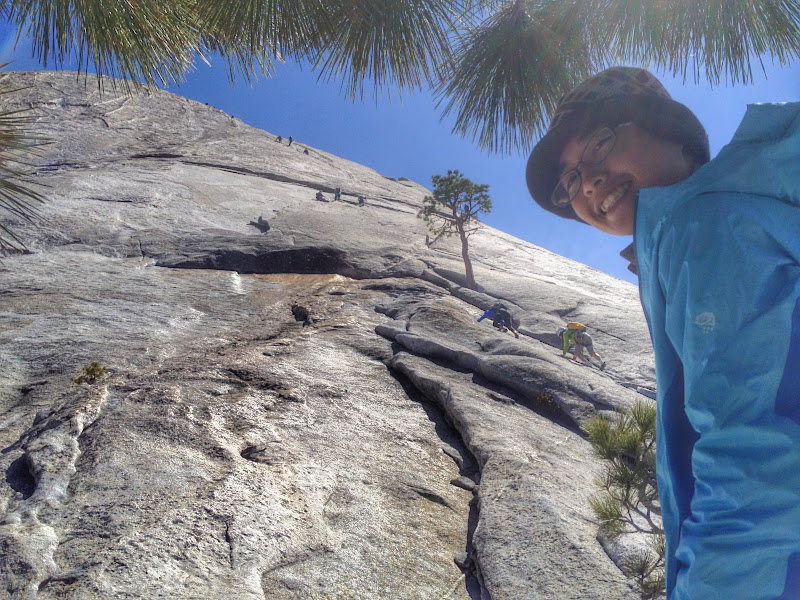 Waiting for our turn

Snake Dike turned out to be a fun and mellow climbing. I led the run out pitch. Even though Jack is the stronger climber, my specialty is runout, easy climbing. Step up, reach up, repeat… don’t think of falling. Don’t think of ‘not falling’ because of course you start thinking of falling. You know what, easier to think of totally unrelated stuff like unicorns and cream pies.

Since there are quite a few parties on the route at the same time, delays were inevitable. Thankfully we had a gorgeous cloud-less free day. Everyone was mellow and friendly except for a couple of Italian dudes who wanted to pass everybody. What’s the rush? 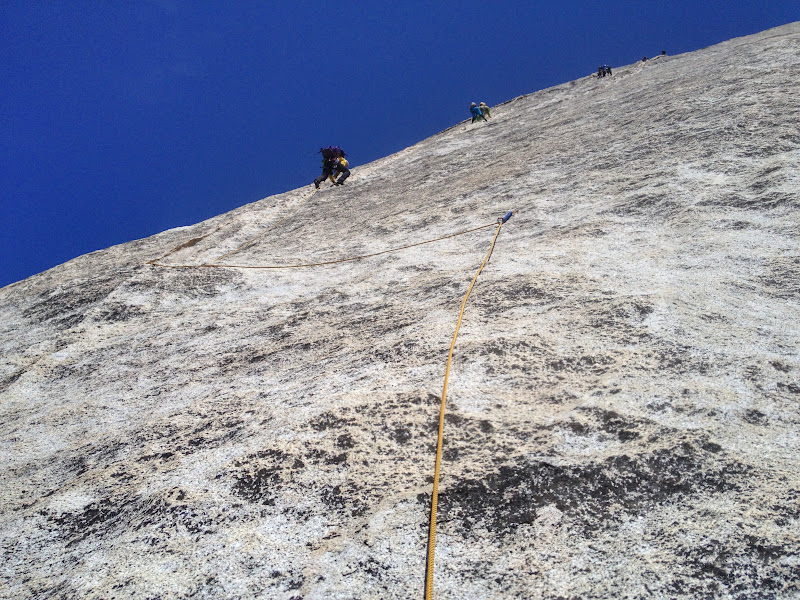 You’d think after we were done with the technical part of the climbing and stowed our rope away, we would be at the top, yes? That it’d be time for pictures and maybe some food?

But oh, no. After the end of the 7th pitch, we were greeted by a vast expanse of 3rd grade slab that went on forever. It was cruel.

But finally we could see the top where a group of other climbers and hikers have gathered. 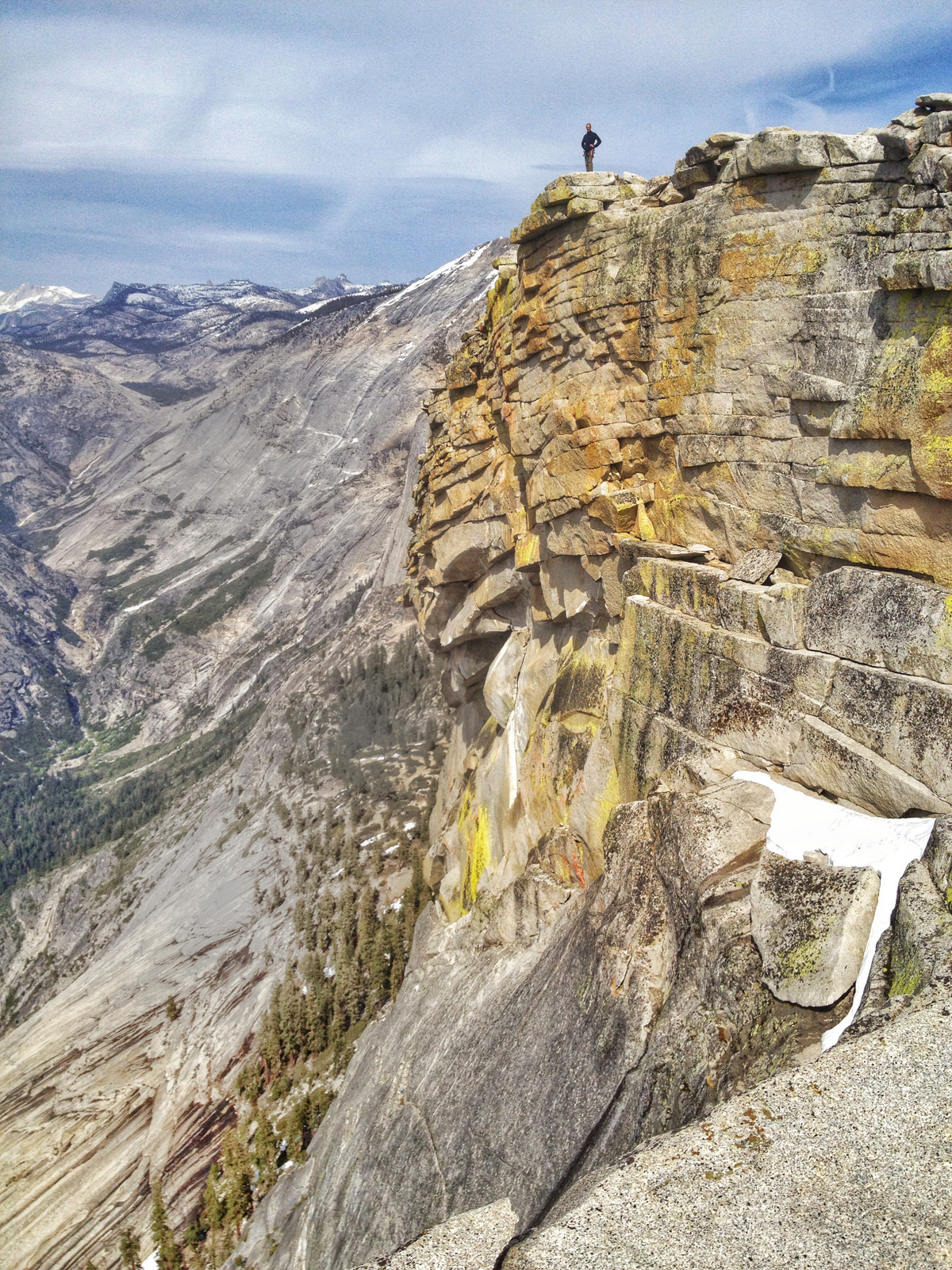 Jack on top of the world 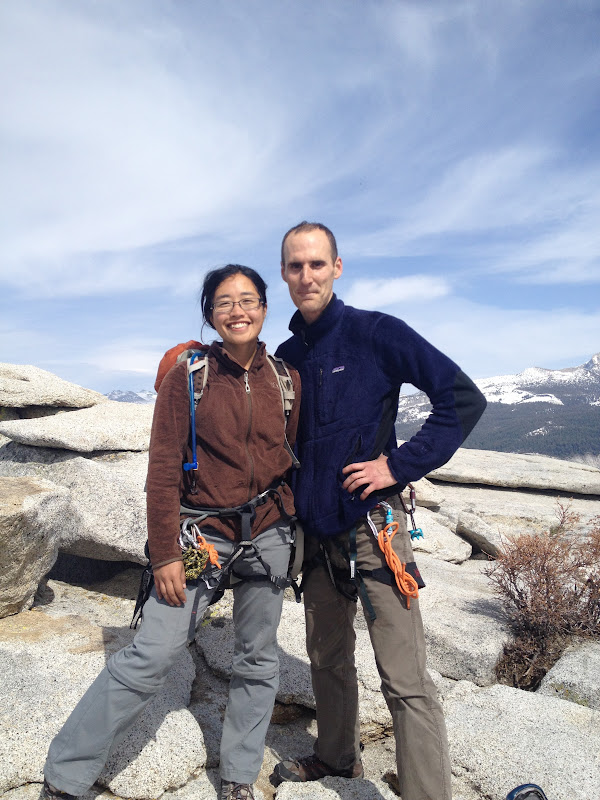 I have helmet hair

I forgot how awesome the top of Half Dome is. The view! The sensation of being on top of the world!

Climbing down was quite an adventure by itself. In summer, park rangers put up cables and wooden slats as steps for hikers to climb up the smooth wall of the dome. But at this time of the year the cables weren’t up yet. Not a problem: some auto block knots provide a backup as we rappel down Half Dome. 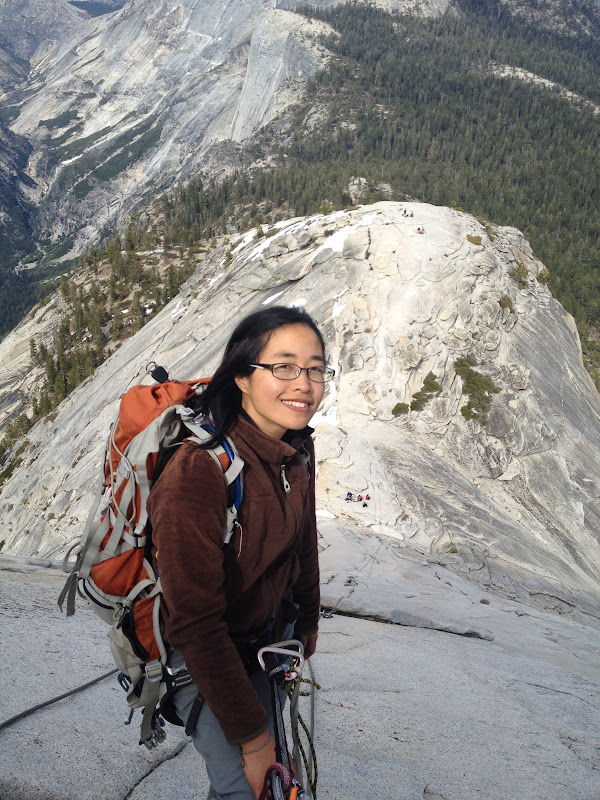 Rappelling down Half Dome

This was actually kind of fun and less scary than the other 2 times I’ve gone down Half Dome. I think having a way to secure yourself to the cable is key. In the past we’ve seen hikers do this section in flip-flops – which is crazy!

At the bottom of the cables, I ran out of motivation. I just wanted to get back at the camp. But wait, we still had an 8 mile hike back. Aaargggh!! And we ran out of food. Double aaarrgh!! Due to some mis-communication we ended up with 2 energy bars and half of a cinnamon roll. For both of us. For the whole 15 hours.

I spent the majority of the hike back wondering what happened to my original plan of frolicking in the meadow and taking pictures. And eating pizzas in Curry Village.

We weren’t a couple of the happiest campers when we got back to the car. We wolfed down the first food we could get our hands on: some smushed bananas, before making a trip to the store and load up on chips, salmon, and cheese.

Finally settled in our campsite, belly full we reflected back on the day. “That was fun, but I don’t think I’ll ever do that again,” I declared to Jack. I think Snake Dike belongs in my “once in a lifetime” list: a list of adventures that I’m glad I participated in but once is enough, thank you very much.

RELATED: Mt.Whitney in A Day

But having said that, despite the exhaustion, the starvation, and the other minor mishaps, I can honestly say I didn’t regret tagging along. As a matter of fact, I was glad I said ‘yes’. The experience reminded me, once again, of the things that I love in life: to be outdoors and the adventures that often comes with it.

Then there’s always that rush of adrenaline for having accomplished something you didn’t think you could do. The most addictive drug of all.

What is your most memorable outdoor moment?

So you think you're good at riddles?

“My wife and I invited 4 other couples to a dinner party. We and the guests greeted each by shaking hands, kissing on the cheek, or whatever. We can assume nobody shakes their own hand or their significant others’. During dinner, I asked everyone including my wife how many people they’d shaken hands with. Everybody tells me a different number. How many people did my wife shake hands with?”