Nicaraguans must think that we’ve all lost our minds. Why would anybody strap on a 35 lb back and go climbing not only 1, but 3 volcanoes in the middle of 100 deg weather? 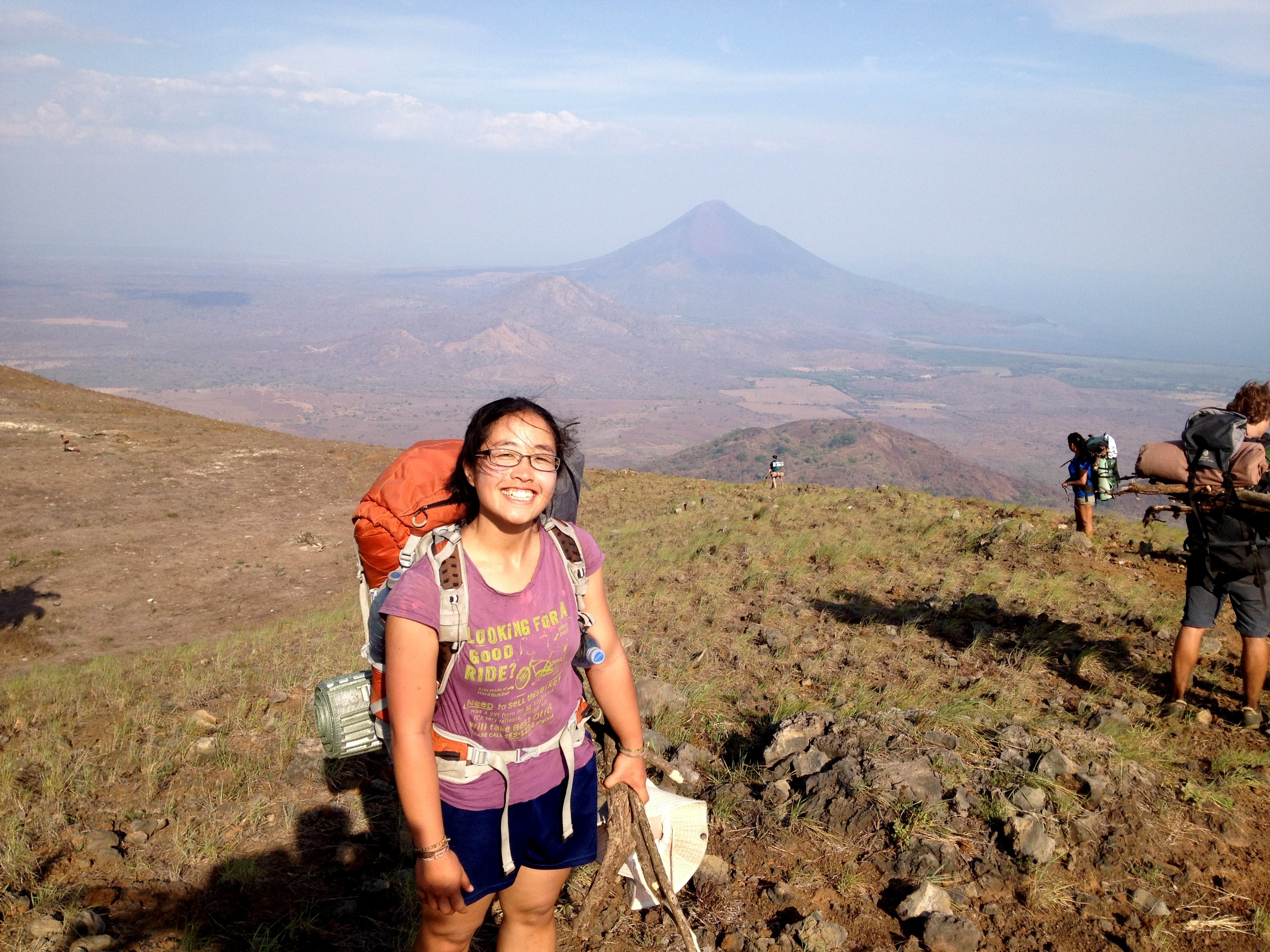 They weren’t the only one. There were times during this El Hoyo trek that I thought I must be crazy. Not only was I doing this willingly, I actually paid to do so. I blamed it on the heat. I never make good decisions when I’m hot.

The El Hoyo trek is one of the more popular treks from Leon. The description on Quetzaltrekker site promises:

“Three volcanoes and a crater lake, all in two days!”

The morning of the trek, I was shown the pile of communal stuff we had to put in our bag: my pile consisted of 8 litres of water and a 3 person tent. I looked at my 40L pack. I looked at the ridiculously large pile. I looked at my pack again, puny by comparison. I wiped the sweat off my neck (it was 7 am and it was already blisteringly hot) and started to wonder if it was too late to get my deposit back.

But more people started coming in and my pride prevented me from bailing out so early.

I had to sacrifice my big camera (so all of the pics from this trek are taken with my Iphone) to fit everything in my pack. All of us piled into the back of 2 trucks and off we went. 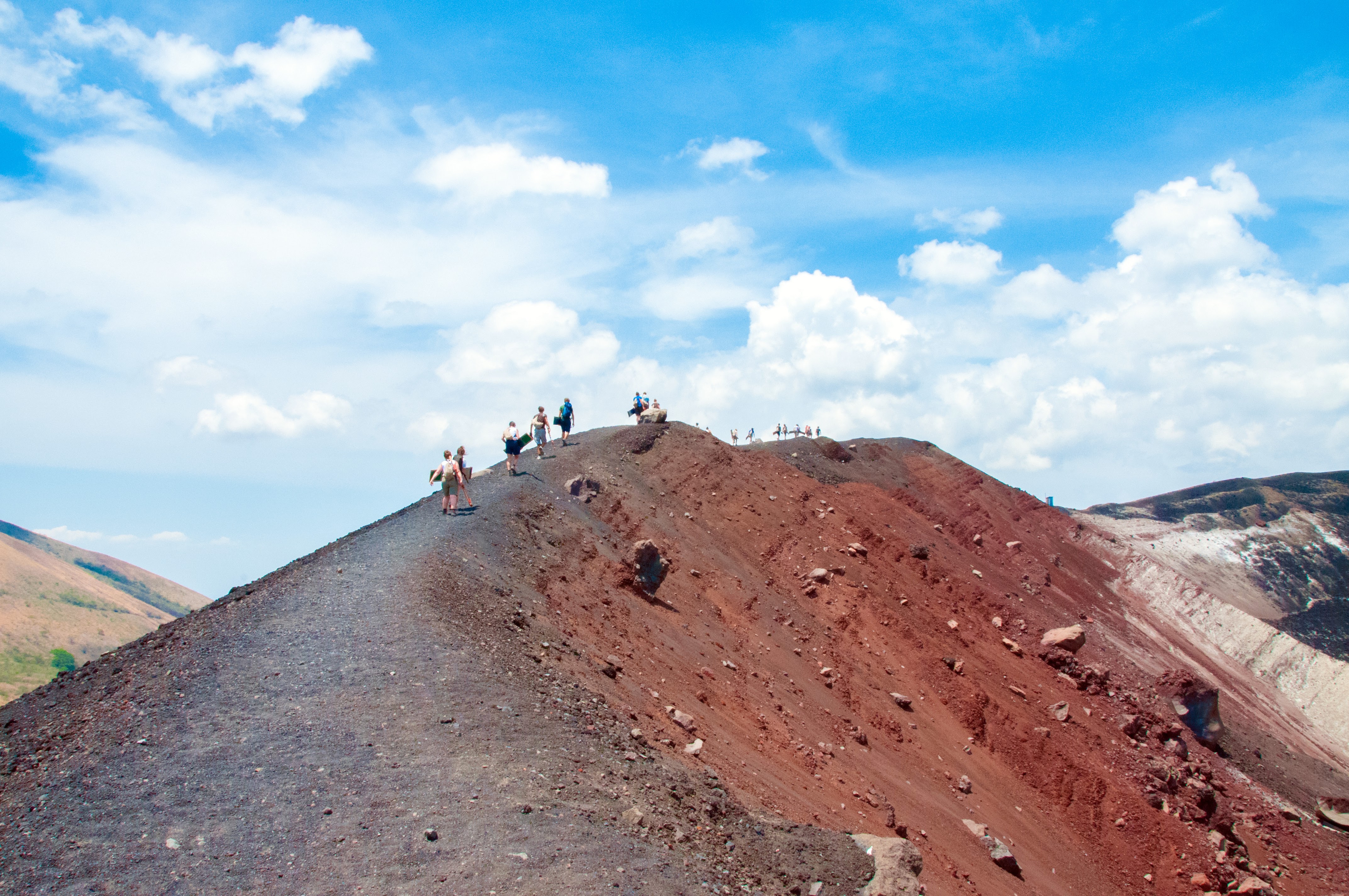 MORE: Getting stuck on a volcano

Little did we know that the 45 min hike to the top of Cerro Negro was a mere warm up. The 1.5 hr of what followed afterwards was BRUTAL. Our guides had warned us about this section of the trek and they weren’t exaggerating.

It was a 1.5 hour of constant uphill trudge that was relentless in steepness and heat. What made this hike extra challenging in the summer is the amount of dust on the trail. Within 10 mins into the hike, we were all caked in dust and sweat and remained so until we reached our campsite.

When the going gets tough, our guides kept encouraging us on, “Almost there, guys! It’ll be easy afterwards.” And once again, they were right. After 1.5 hours, the trail leveled off. We marched on at a brisk pace and we actually had enough breaths left to carry on conversations to get to know each other.

Whoa! This is El Hoyo!

All of a sudden, a big gaping hole appeared on the hillside to our left. This was El Hoyo, aka ‘The Hole’.

It was MASSIVE! I’d seen its picture before but I wasn’t prepared at how massive this sunken crater is. Soon after, we came upon our campsite and everybody breathed a big sigh of relief. Even more so when we realised how spectacularly located it is. Just look at the view. It was quite a reward after such a hard hike. 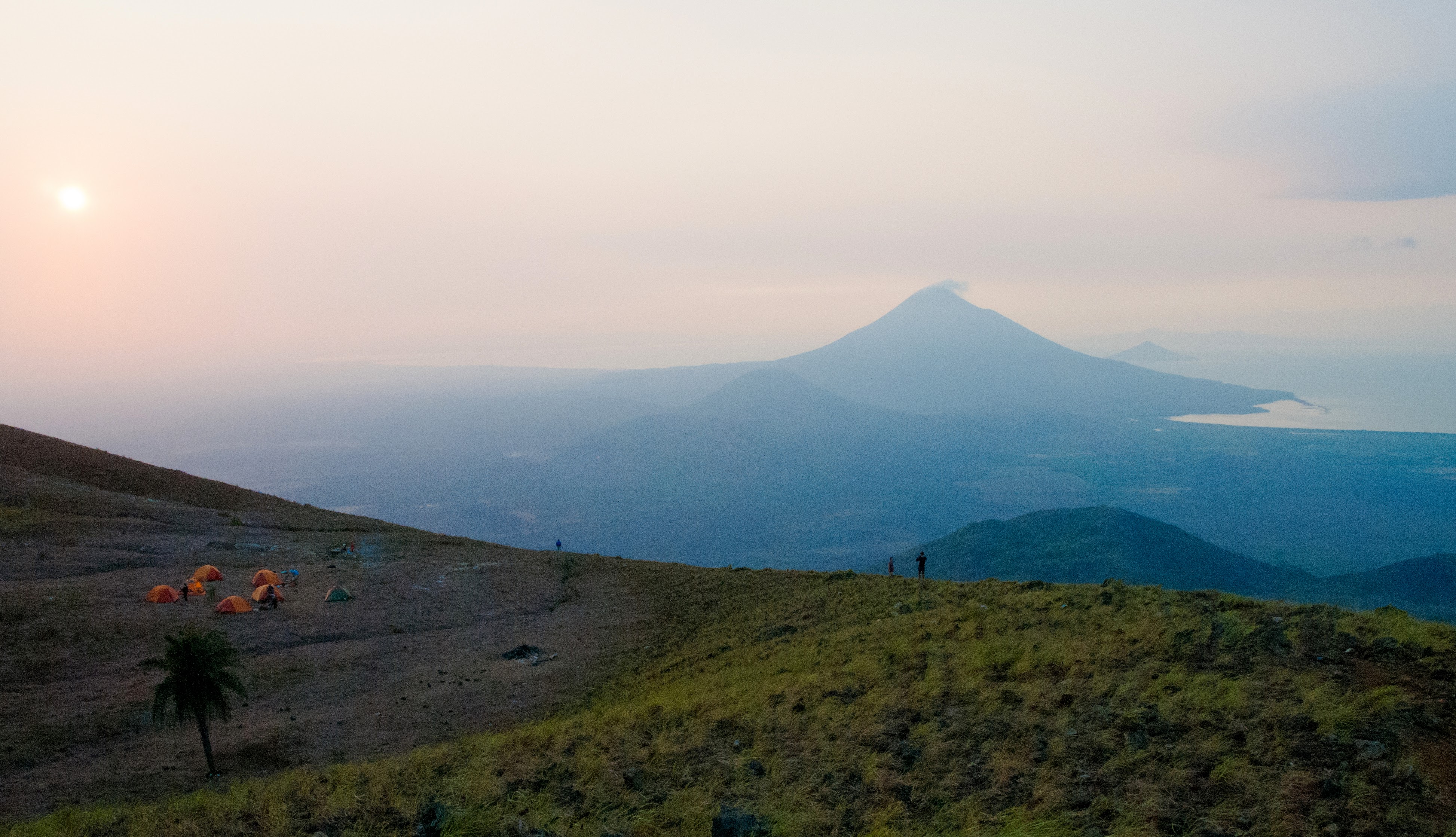 We ran down the ridge, hurried up to set up tents, and ran around taking pictures.

We hiked up to El Hoyo to peer inside, and as the sun was setting our guide took us a to ridge overlooking a chain of volcanos. It seems that the whole of Nicaragua is covered with volcanoes just waiting to erupt.

It was an awesome spot to witness the sun’s last ray as it sets behind the volcanoes. 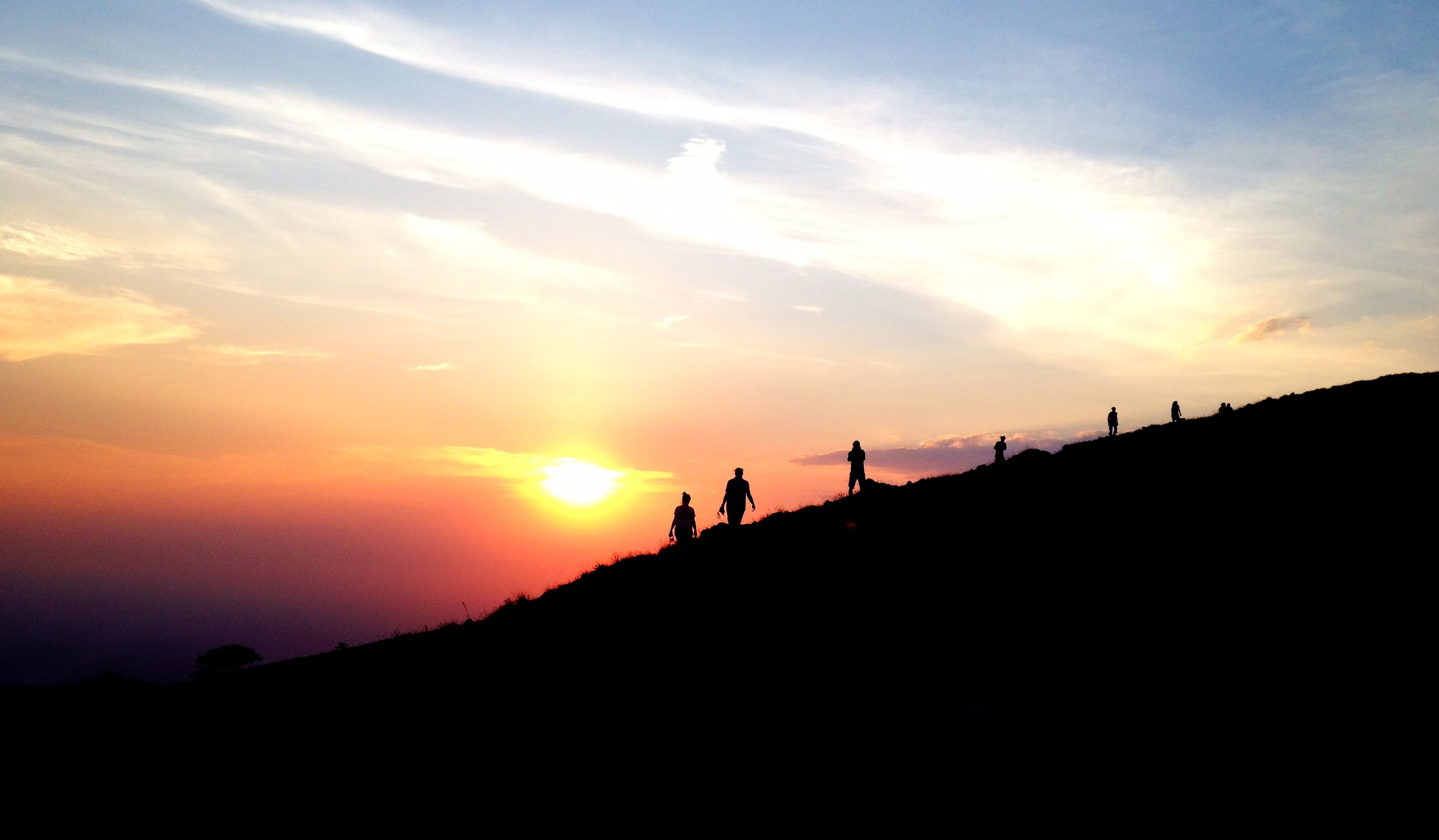 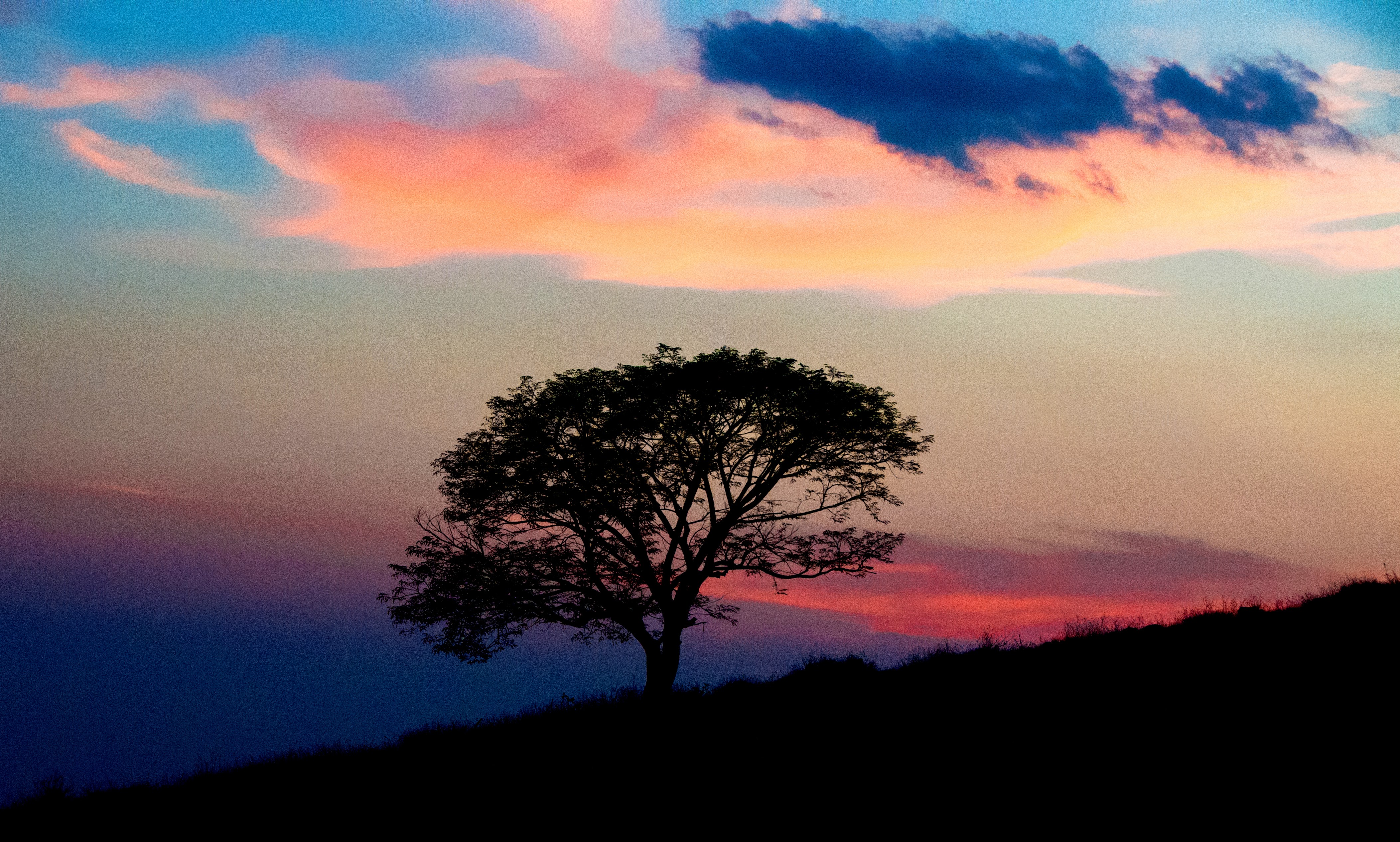 As we returned to the camp, I enjoyed an instant brief popularity as the only person in the group with baby wipes (the next best thing after shower on a hike!). We all cleaned up as much as could before settling down around the campfire for dinner. 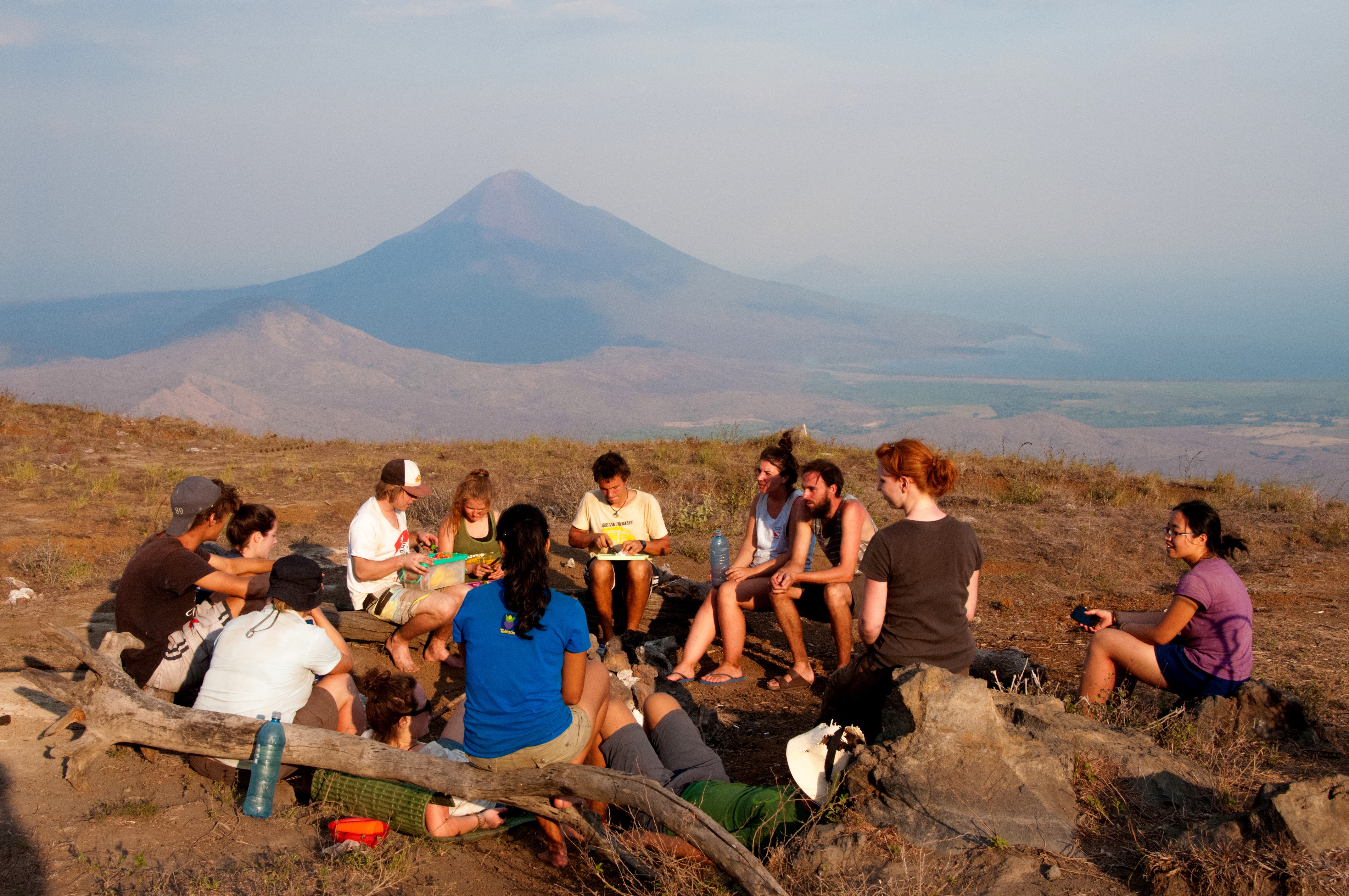 I knew that the next day I’d wake up with aching muscles, but for now, the campfire was blazing and I had a bowl of hot food in hand, I looked at view around me and the camaraderie among new friends and I thought to myself,

How to go do the El Hoyo trek from Leon
Quetzaltrekkers office is located in central Leon, around the corner from Bigfoot Hostel. It’s run completely by volunteers and 100% of the profit goes to the charities they support. The guides have a 3 month commitment as volunteers.

When to go climb El Hoyo
January – February are the best month: it’s towards the end of the rainy season. Less chance of rain but the countryside is still green from the rain.

Tips on climbing El Hoyo
– Bring snacks if you’re the type that like to ‘graze’ constantly during your hike
– Baby wipes for ‘shower’
– Bring something for the wind, even in the summer.
– If your hostel has a freezer, freeze 1L or 2L bottle water and bring them. They’d taste heavenly during the hot hike.

Where to stay in Leon
La Tortuga Boluuda – I stayed in 3 different hostels in Leon, and this one is the best. A fan for each bunk bed, nice lounge with good wifi, and make-your-own pancake breakfast.