Hiking the Lagazuoi tunnels in the Dolomites is something very different from your usual hike. Part of the hike uses a tunnel system through a mountain which dates back to World War 1. The Lagazuoi is one of the highlights of our 3 week in the Dolomites.

The Lagazuoi tunnel system is located inside the Lagazuoi mountain. It is an interesting remnant from the battles of WW1. The extensive tunnels were built by the Italian troops over many months, in their attempt to wrest control of the summit from from Austro-Hungarian troops. Whoever controls the summit, controls the Falzarego Pass, an important artery of supply during the war.

The Italians’ plan was crude but simple: dig a tunnel to bring a large amount explosives under the Austrian troops who controlled the summit – Lagazuoi Piccolo – and blow them up.

Today, hiking Lagazuoi tunnels is one of the most popular day trips from the chic resort town of Cortina d’Ampezzo – about 30 minute drive away. Hikers are drawn by the historical nature of the area as well as its incredible natural beauty.

Thanks to EU-funding, the trenches, machine gun posts, barracks, and tunnels have been restored as some sort of an open air eco-museum. Hikers are now able to walk the same paths as those who perished during WW1 and get a small sense of life must’ve been like in the beautiful, yet harsh and punishing setting.

You can choose to hike the Lagazuoi tunnels in either direction: top – bottom or bottom – top. From Passo Falzarego parking lot you have two options to reach the summit: hike trail #402 OR take the cable car (18 Euros).

Map: here’s a helpful topo map of the hike/tunnel system. This hike is also listed in Short Hikes of the Dolomites guidebook. I highly recommend it.

Equipment: headlamp, gloves, good footwear, layers (the underground tunnels get chilly). Helmet is optional but recommended. You can rent helmet and headlamp from one of the stores near the parking lot. 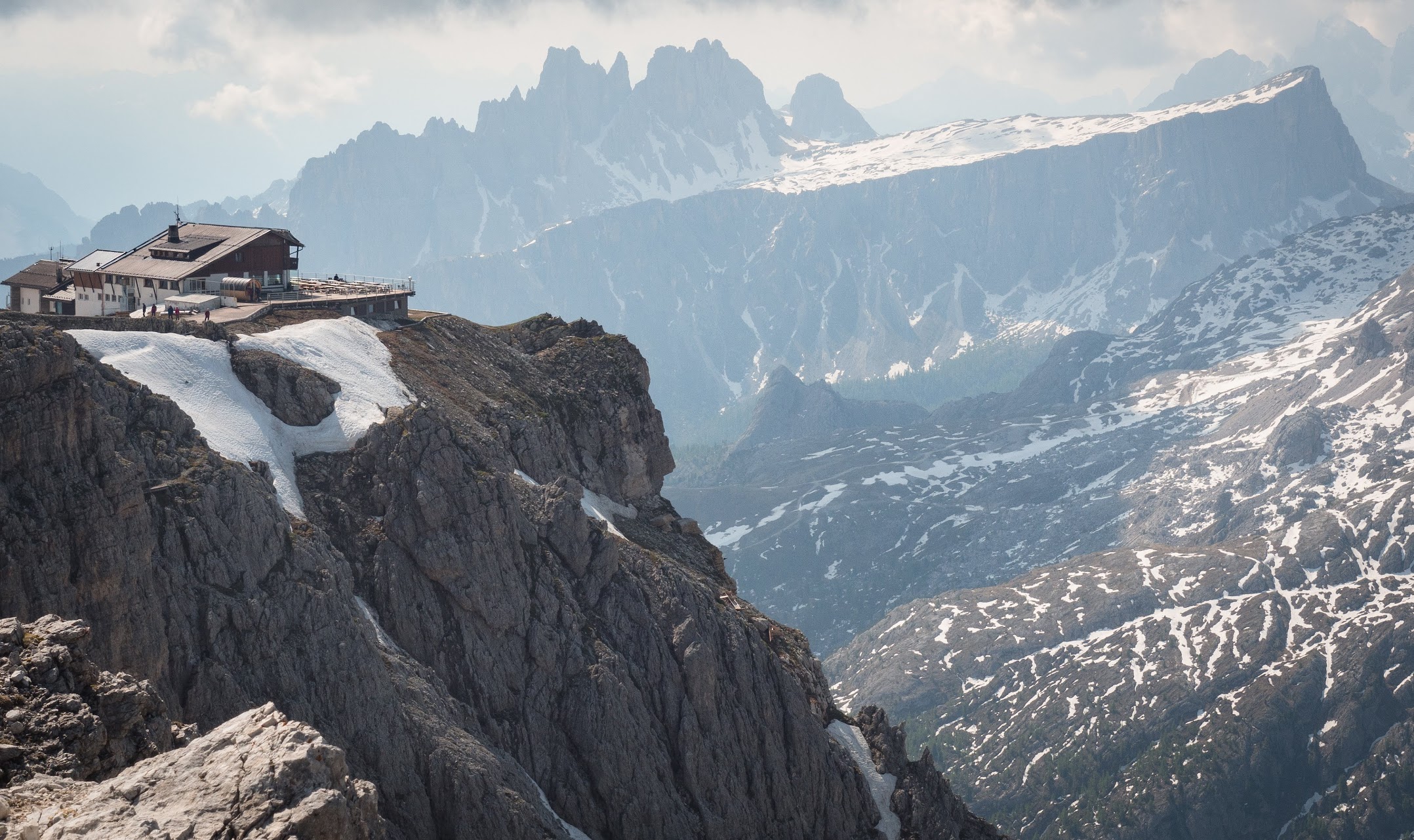 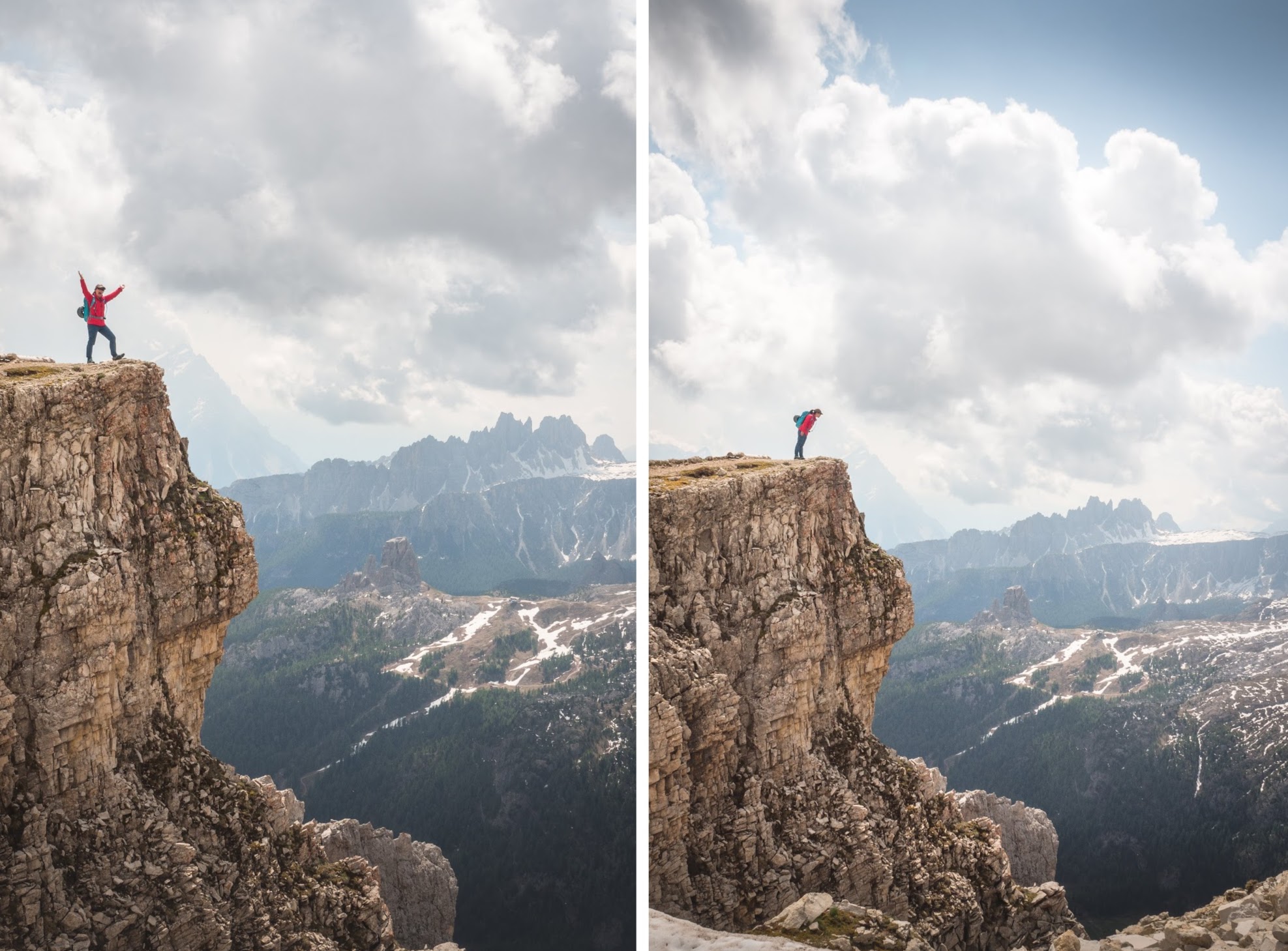 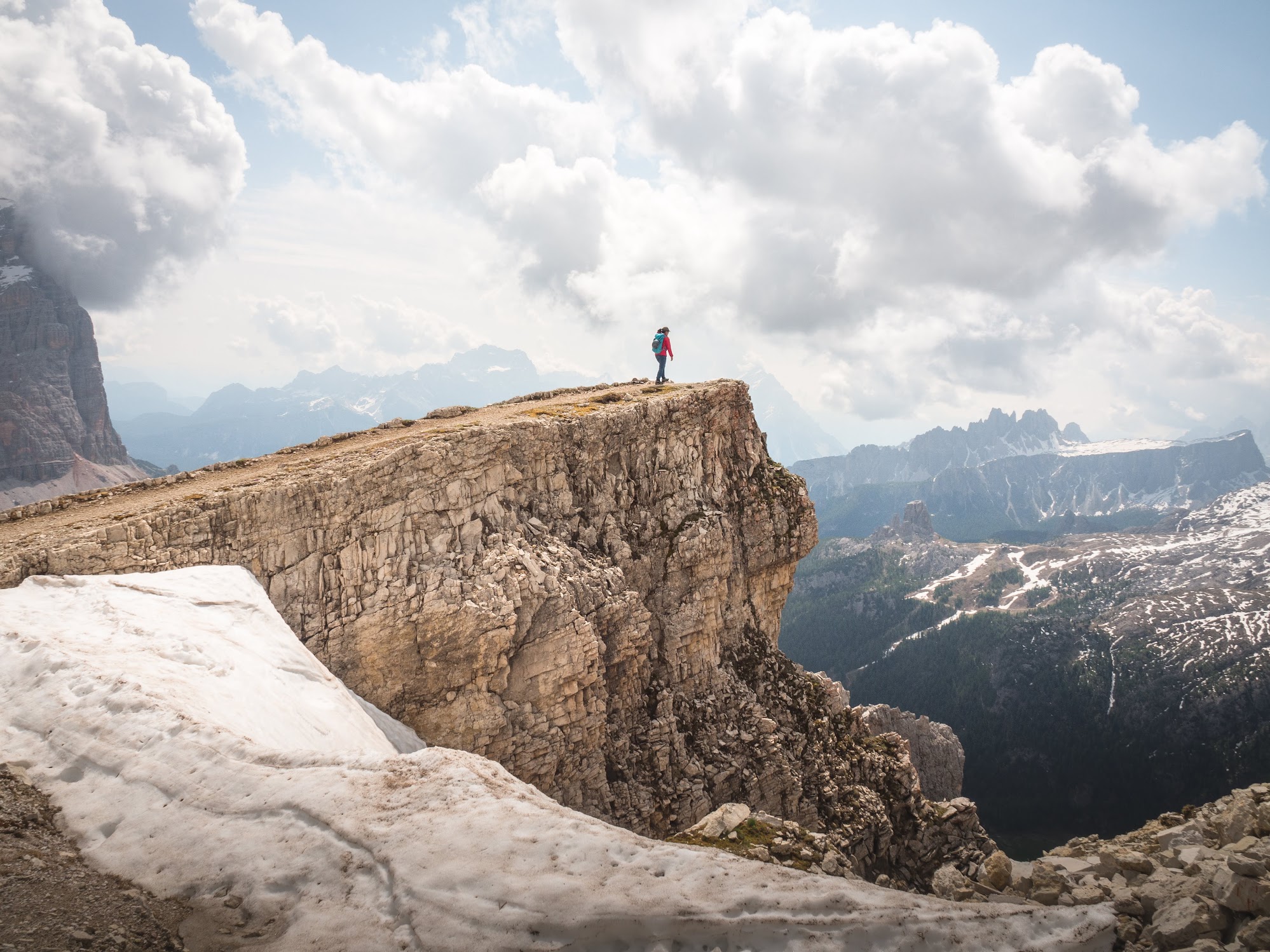 A viewpoint at Lagazuoi summit

A short walk beyond Rifugio Lagazuoi will get you to the summit proper – Lagazuoi Piccolo (2278m). It’s marked with a cross. The view from the top is among the best in the Dolomites. On a clear day, you’ll be able to get sweeping panoramas of soaring mountains, of rock, pinnacles, and vertical walls. It feels you can see all of the Dolomites from up there: Cinque Torri, Tofane, Sella, and Marmolada massif; and many more groups in the distance.

Even if you don’t do any hikes in Lagazuoi, it’s worth getting to the summit just for the view alone. 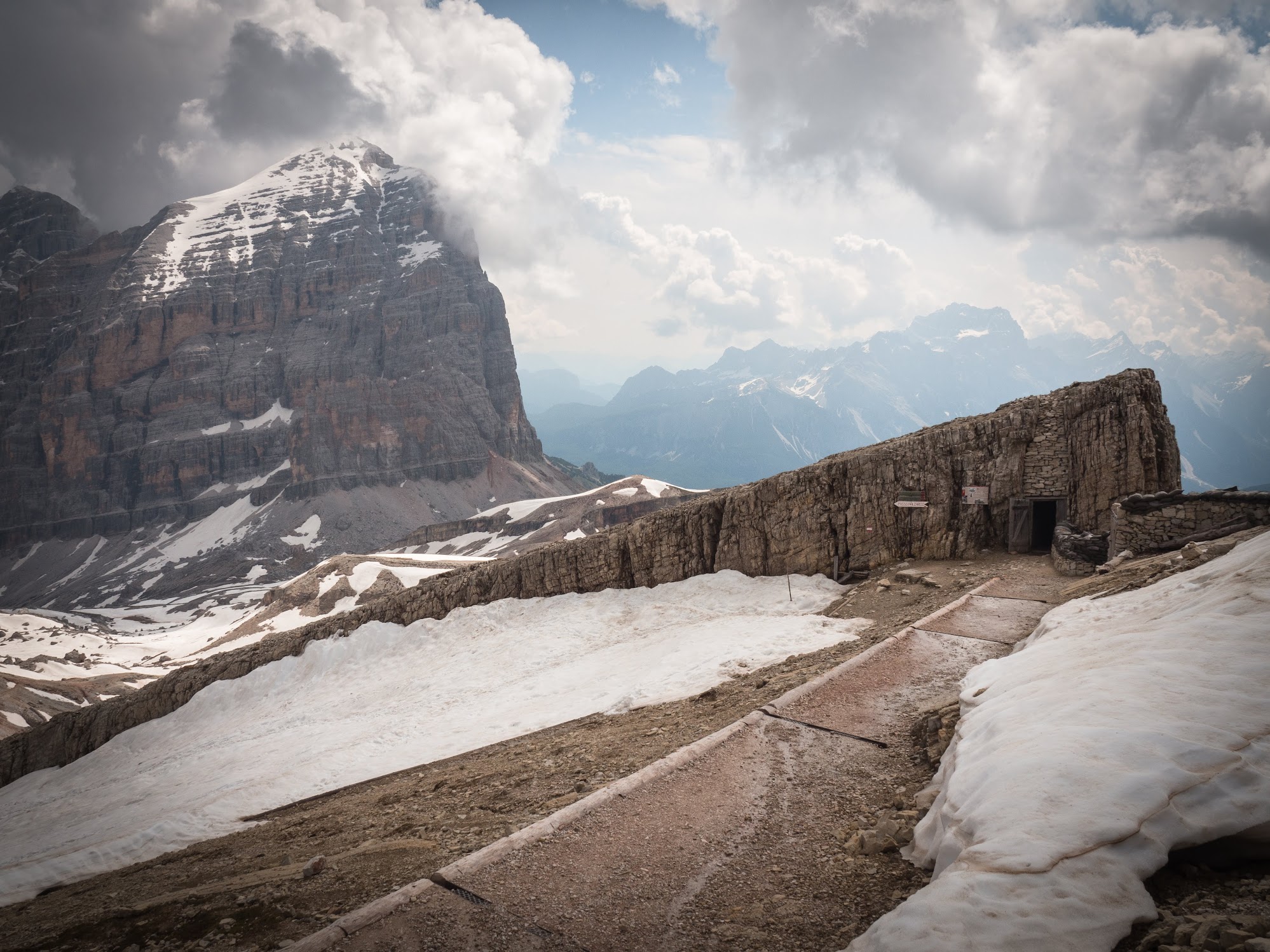 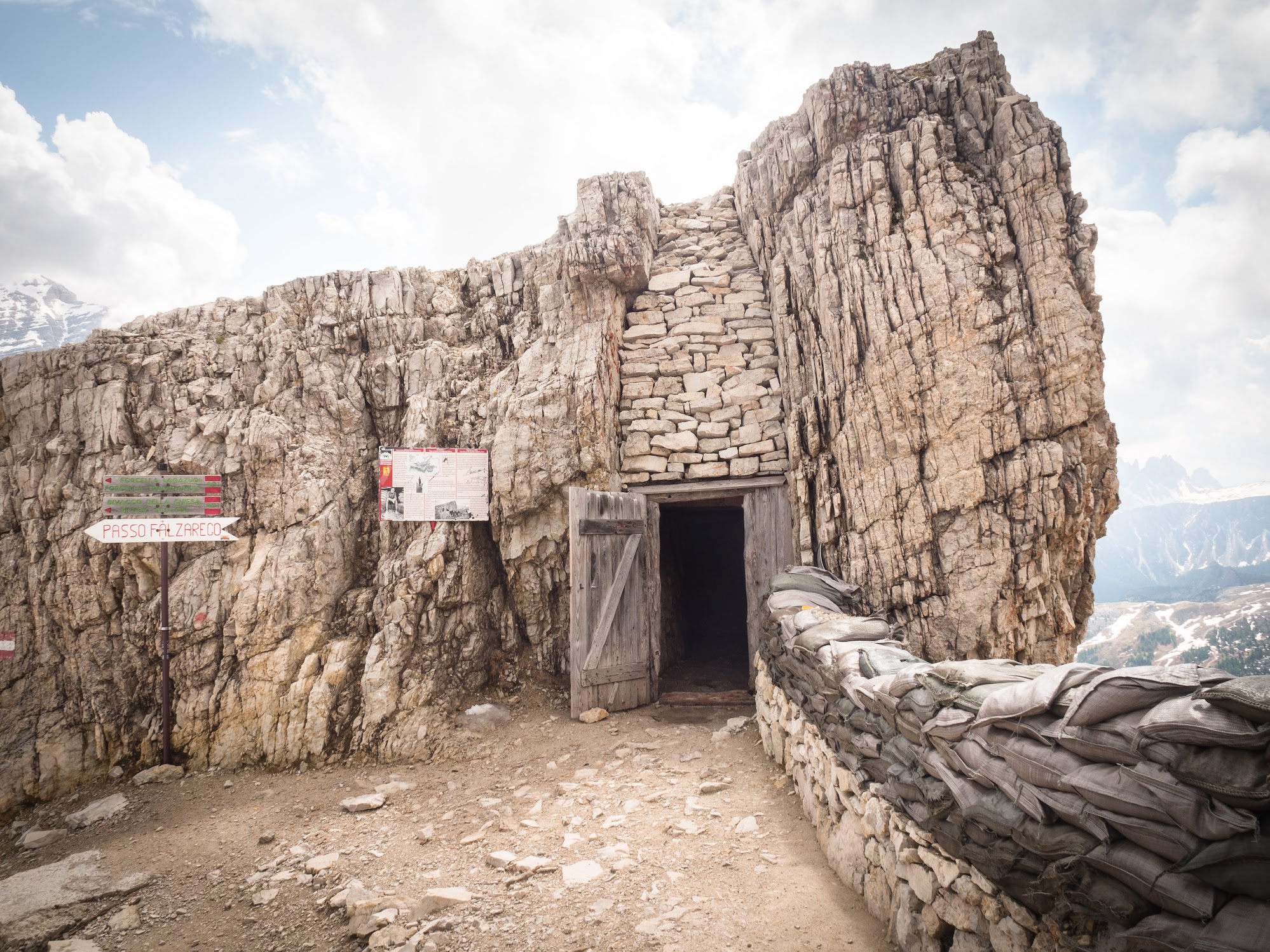 Remnants of WW1 can be seen throughout Passo Falzarego area, including at the summit of Lagazuoi. 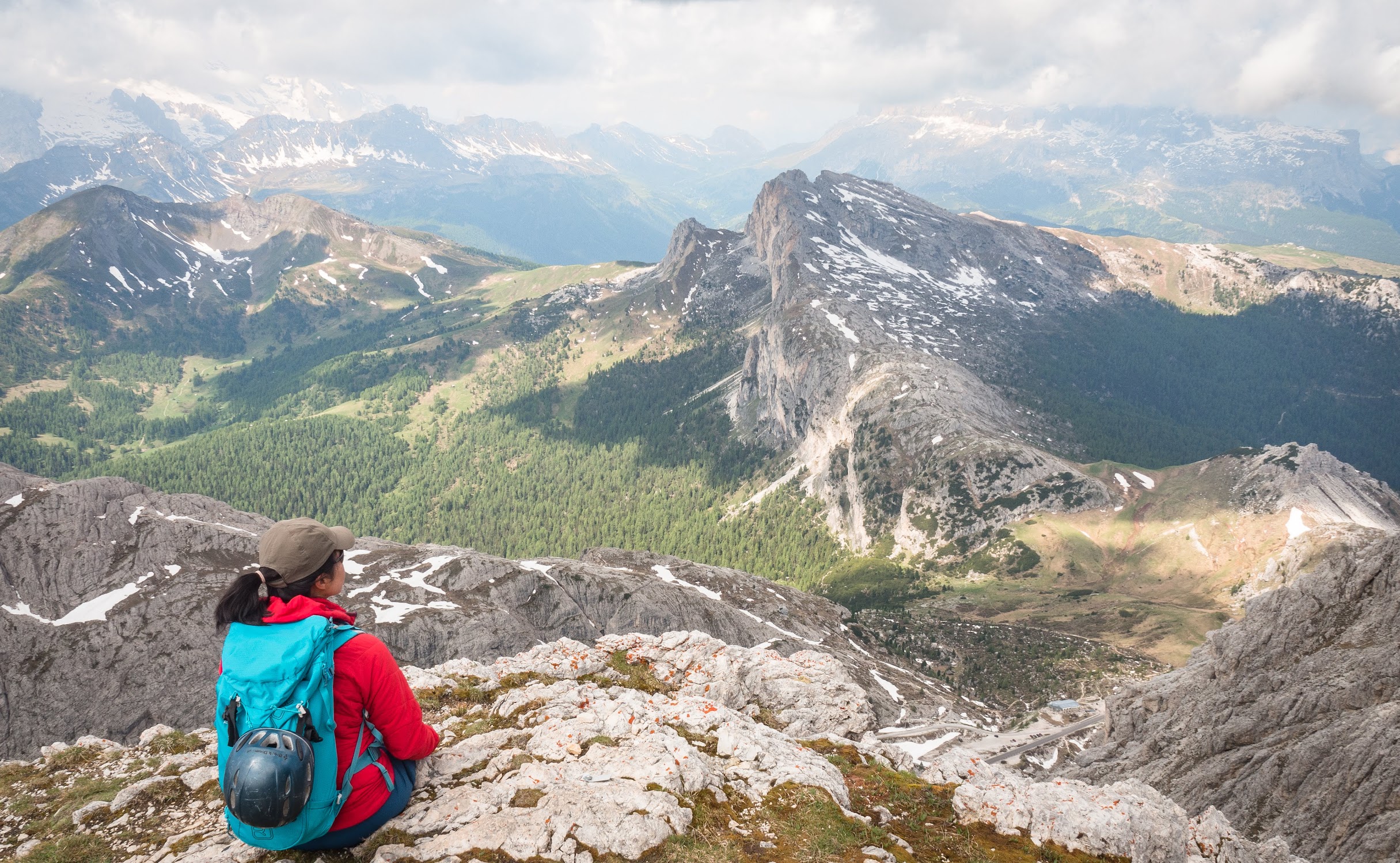 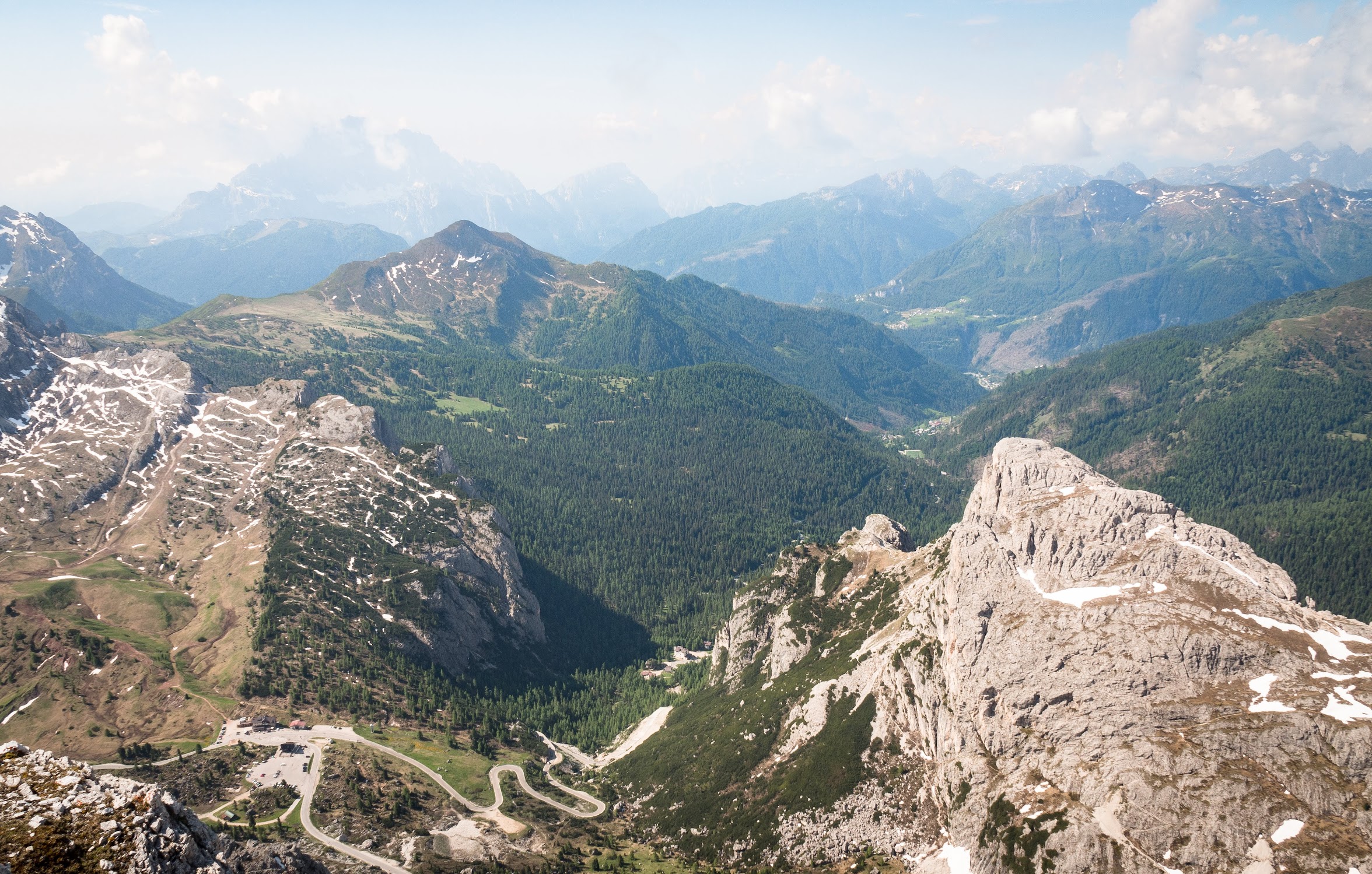 The view over Passo Falzarego

After exploring the summit, we followed the sign that says “Galleria” or “To Tunnel”. The trail takes us close to the cable car platform, and then swerves away skier’s left following the contour of the mountain.

In some articles, the Lagazuoi Tunnels hike is often referred to as a via-ferrata but for the route described below, we didn’t need any specialized equipment other than a headlamp or a helmet. Unless we somehow bypassed the via-ferrata sections by accident. The tunnel entrance is just behind Jack on the other side of this feature.

You’ll soon see a striking feature: a narrow part of the mountain that juts out (see pic above). Follow this to the very end for a great photo op, and to find a timber doorway that marks the entrance to the tunnels. If I hadn’t known that this was a part of an official trail, I would NOT have gone down it. It looks very forbidding, not to mention claustrophobic AF. 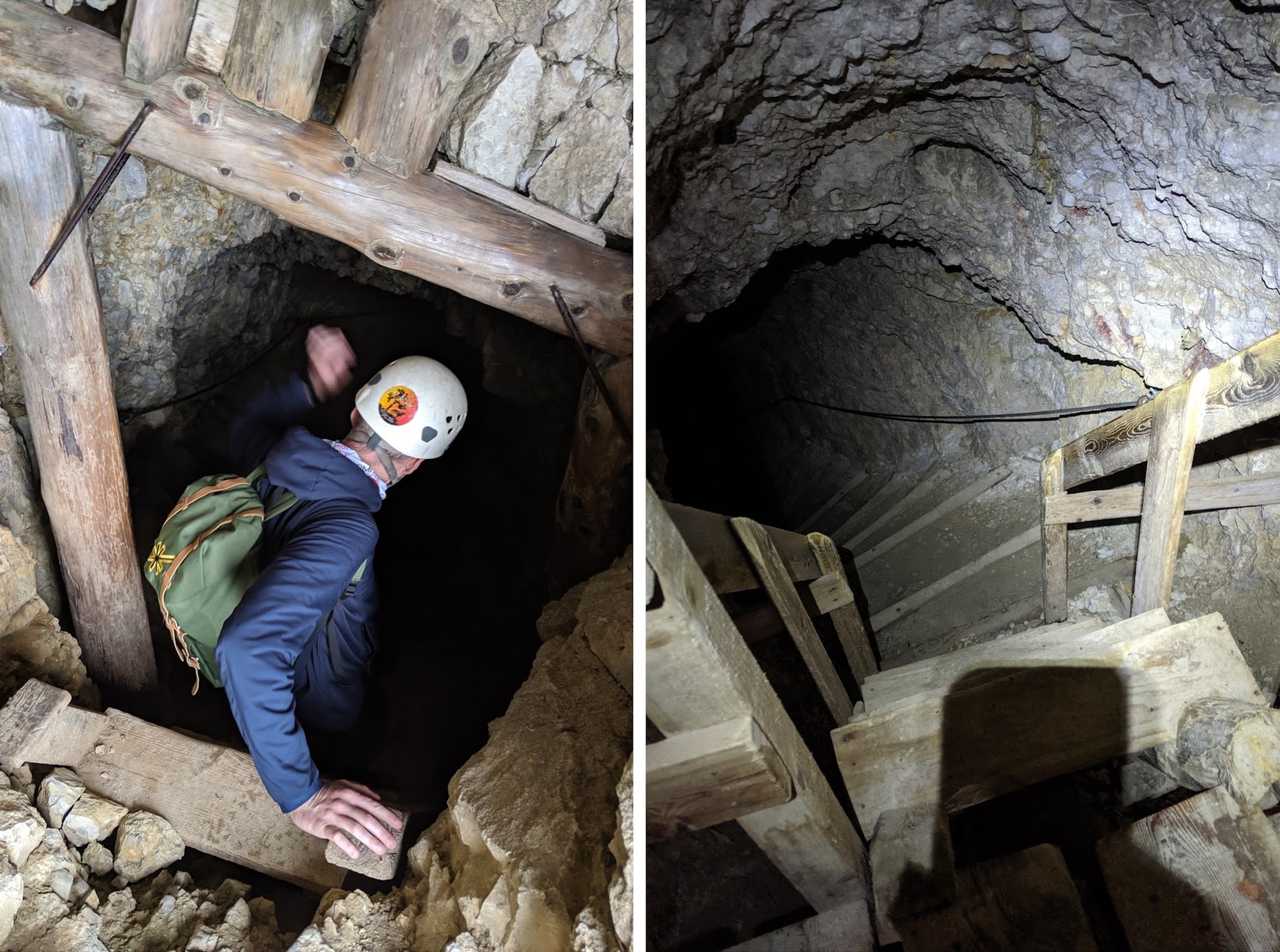 Windows cut out on the side of the mountain overlooking the pass provide some natural light. However, there were stretches of complete darkness so headlamp is necessary. Having a headlamp also frees your hands to help navigate the uneven steps and low ceiling. The tunnel system was constantly damp and cold, it was hard to imagine people were living in that kind of condition.

There were side tunnels to explore as well that lead to more viewpoints and rooms. Even though there were maps posted at junctions, they are quite impossible to make sense of. So just choose whichever branch look most interesting and head generally downward.

As we walked down the slippery tunnels we passed barracks, storage rooms, and machine gun posts. Cable handrail helps to guide us during the steepest parts of the tunnels. 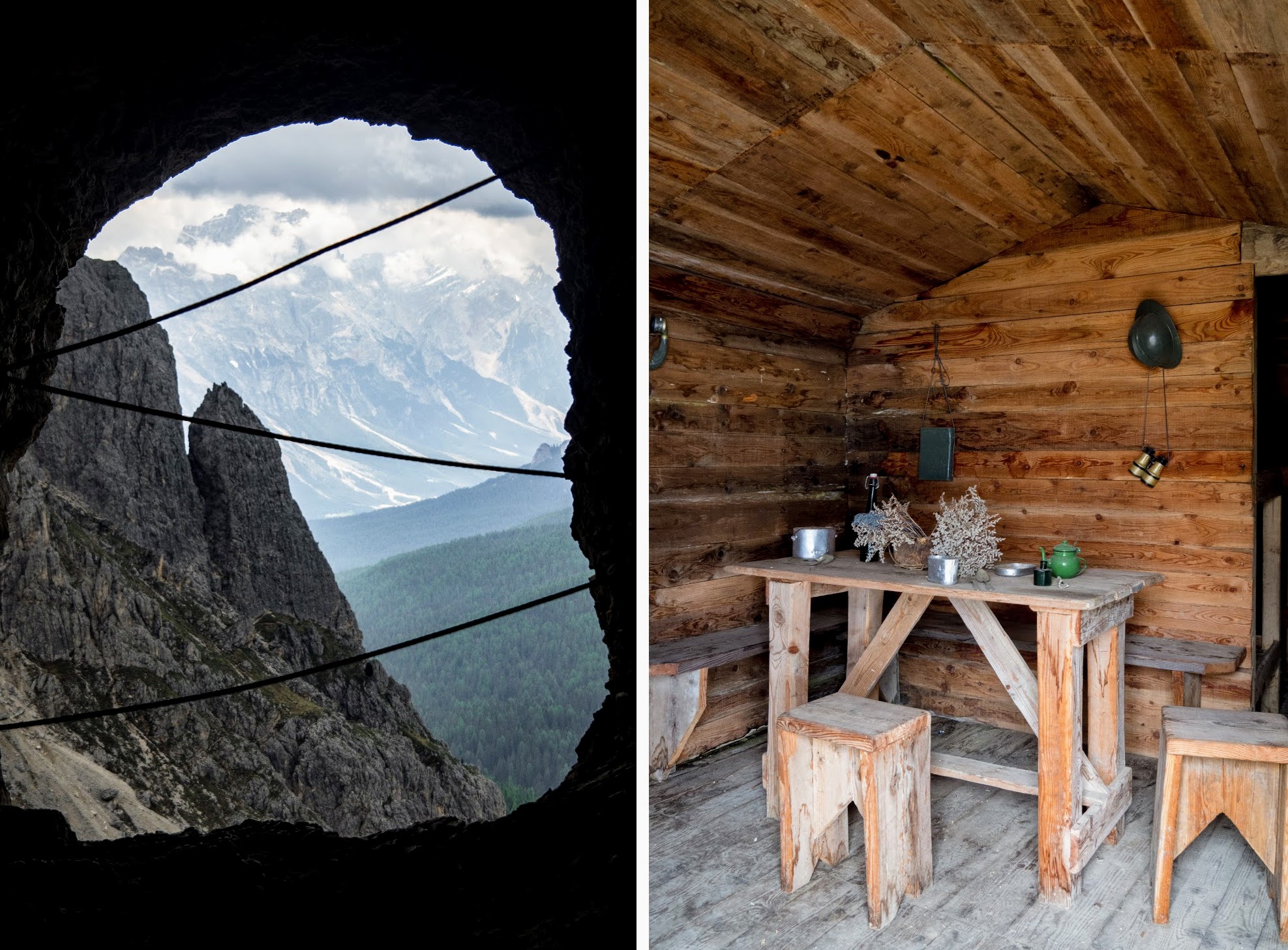 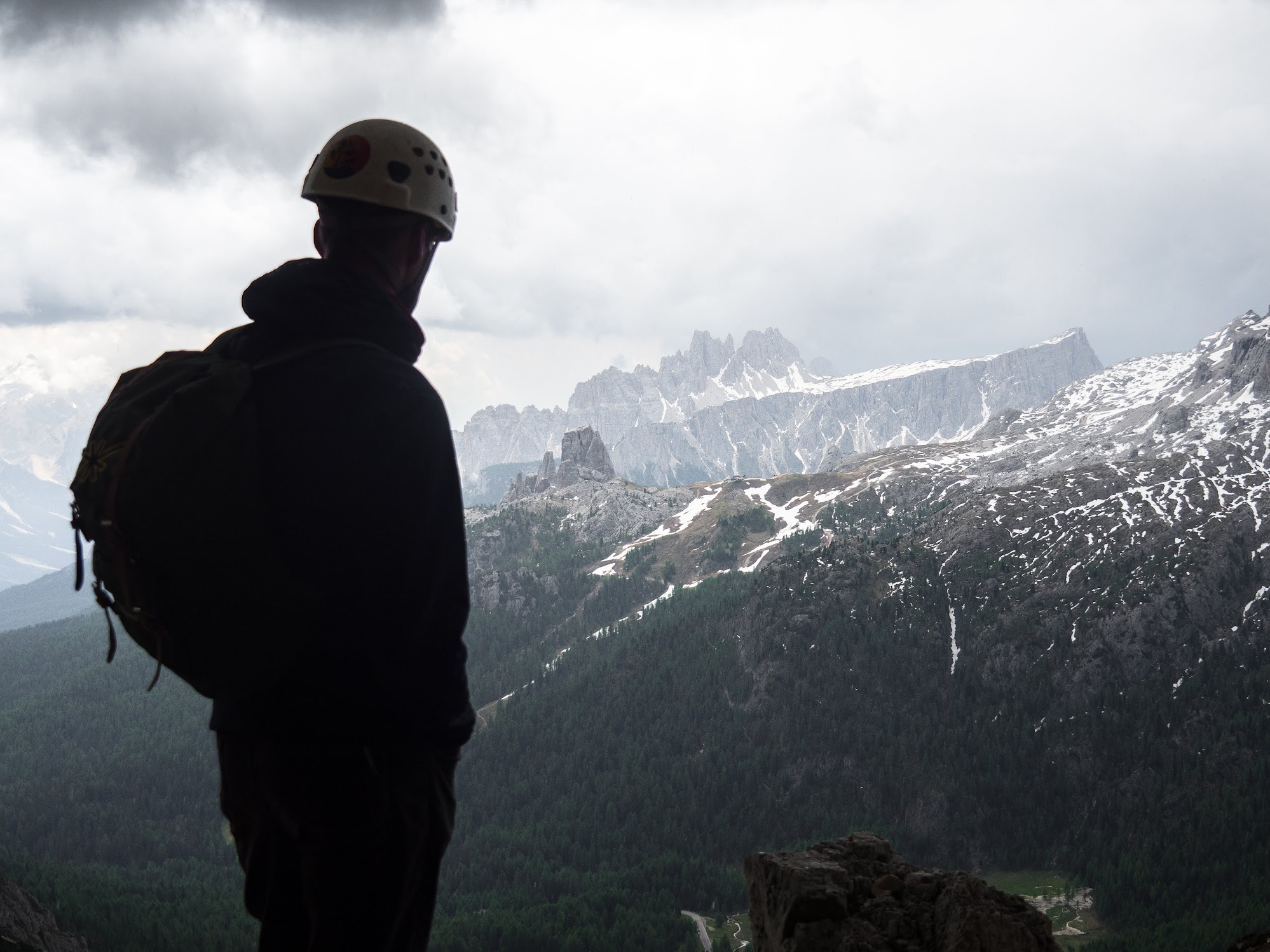 Look at the weather. Yikes! 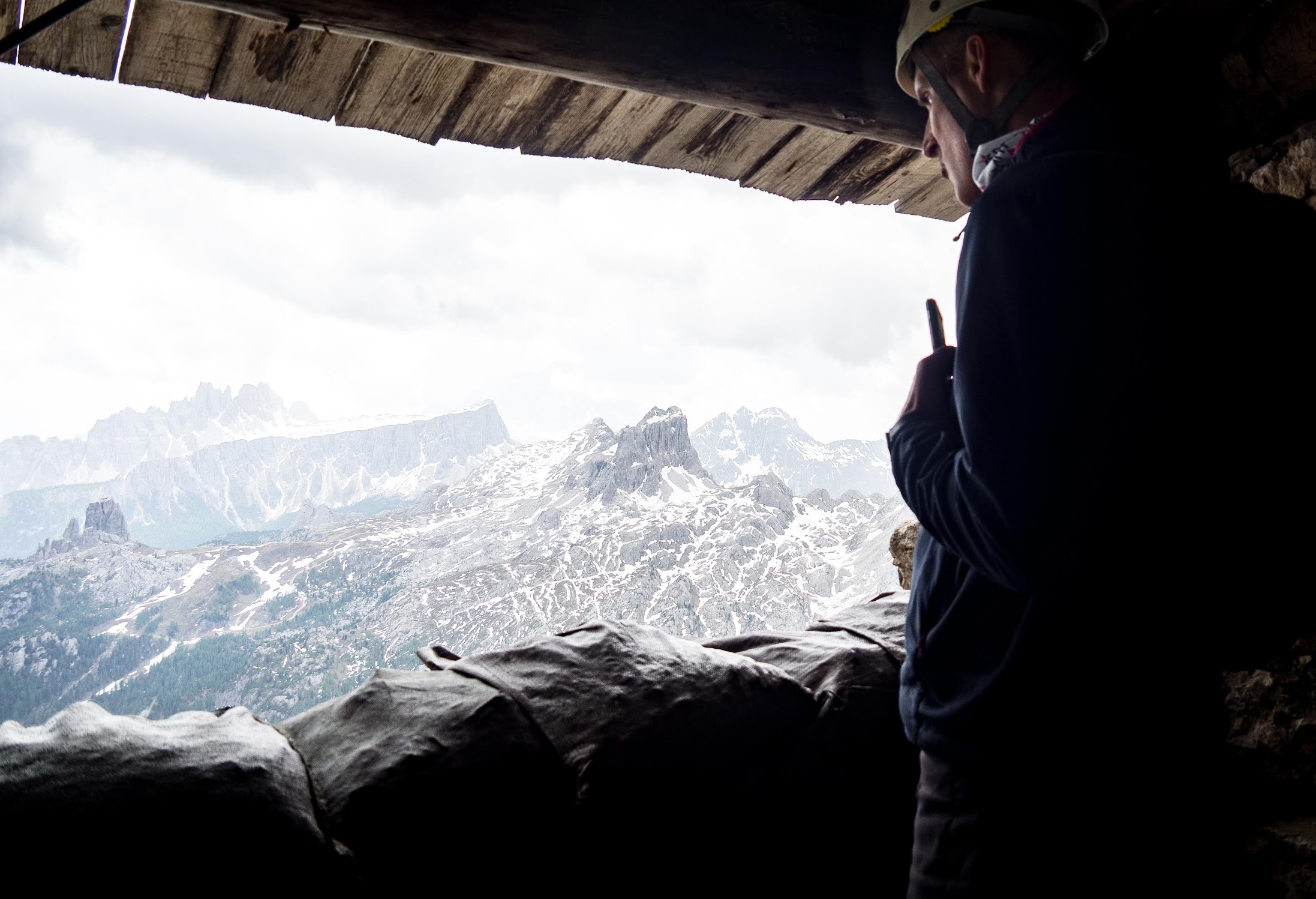 The window and barrack at Lagazuoi tunnels

Towards the end of the tunnel, we came across a man and his son hiking up. They were completely drenched in sweat. We had to unfortunately tell them that they were still so very far from the summit. They looked a bit deflated. Being so sweaty in such cool environment can’t be that comfortable. So keep that in mind if you decide to walk up the tunnels.

We finally emerged into an open area where we stopped for lunch and watched the weather. It looked threatening when we started and now it started hailing. We were glad that at least we were sheltered inside a mountain.

If you don’t own your own equipment, you can rent a helmet and a headlamp from one of the stores near the parking lot at Passo Falzarego.
Sale 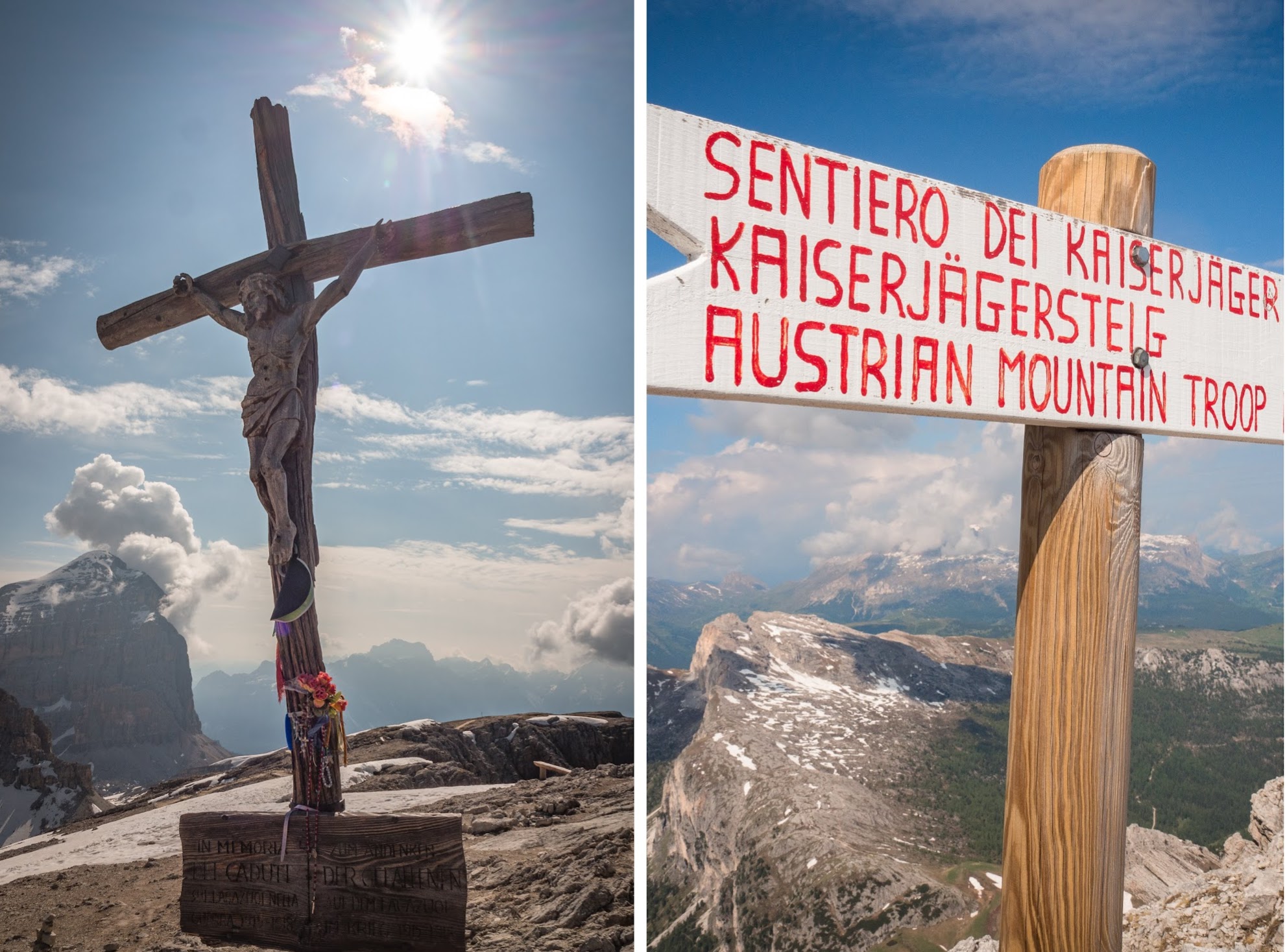 At the Lagazuoi Piccolo

If hiking down slippery and dark tunnels isn’t your thing, from the summit of Lagazuoi Piccolo you can also hike down the “Kaiserjager” Route. Just follow the sign. This was the original supply route used by the Austria-Hungary troops. It has been restored and reinforced with additional iron rungs and even a suspension bridge.

The complete loop is 5.6 mile, part of it goes along the road connecting Passo di Valparola to cable car parking lot. It passes through Lagazuoi Piccolo and Rifugio Lagazuoi. It’s a loop so you have 2 choices here: going away from the pass will take you counter-clockwise along the route and it’s a further walk back to the road. Going towards the pass will take you to the road much faster.

Kaiserjager Route was our original plan because I would pretty much rather enjoy the scenery than being stuck inside a tunnel. Unfortunately this trail was closed due to late season snow when we were there.

However doing the Lagazuoi tunnel hike ended up being one of the highlights of our Dolomite adventure. I guess because not only was it so beautiful, but it was so different than your average hike? We totally recommend it.

Also Read: Adventurous Things to Do in the Dolomites 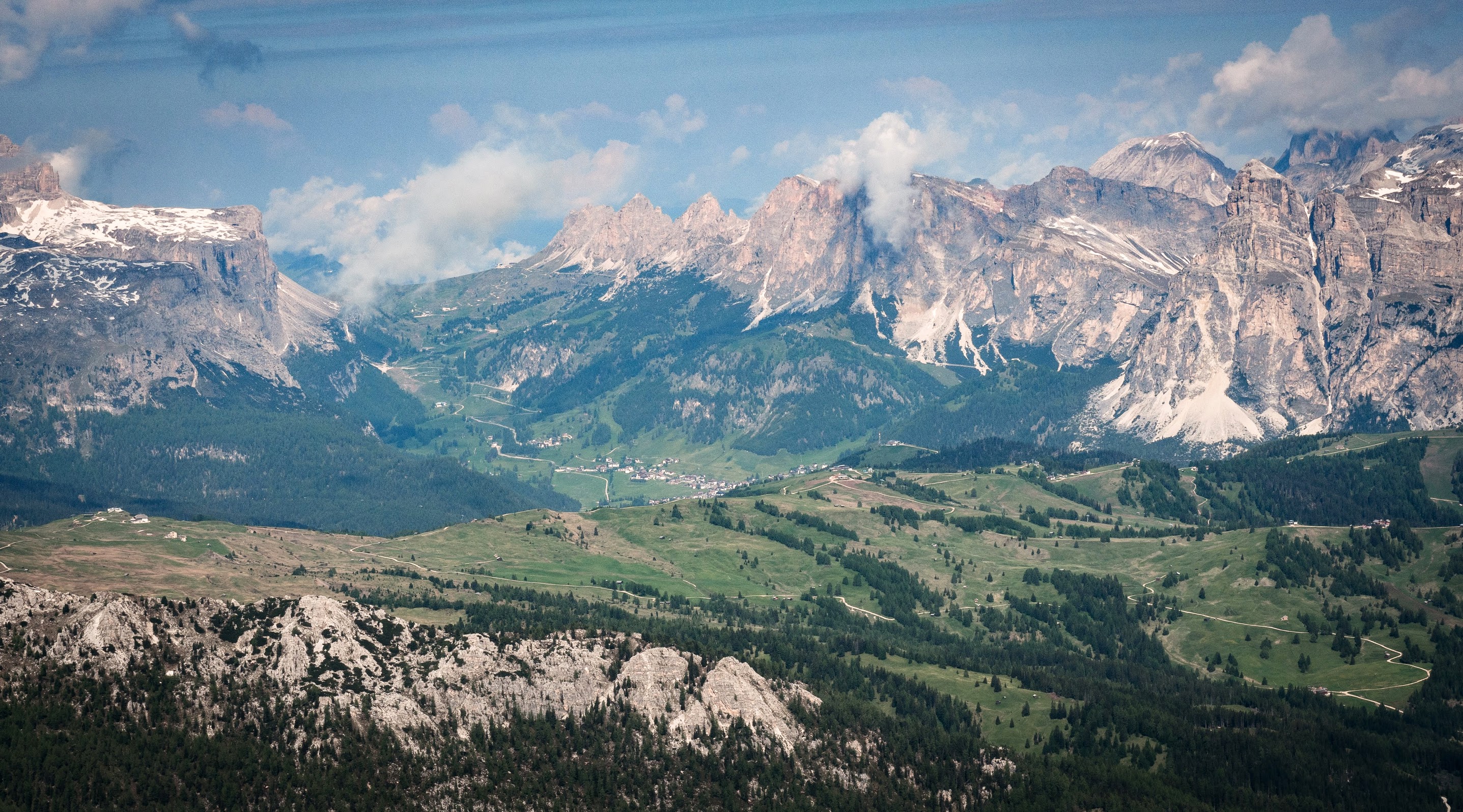 The view of the Dolomites, taken from Lagazuoi 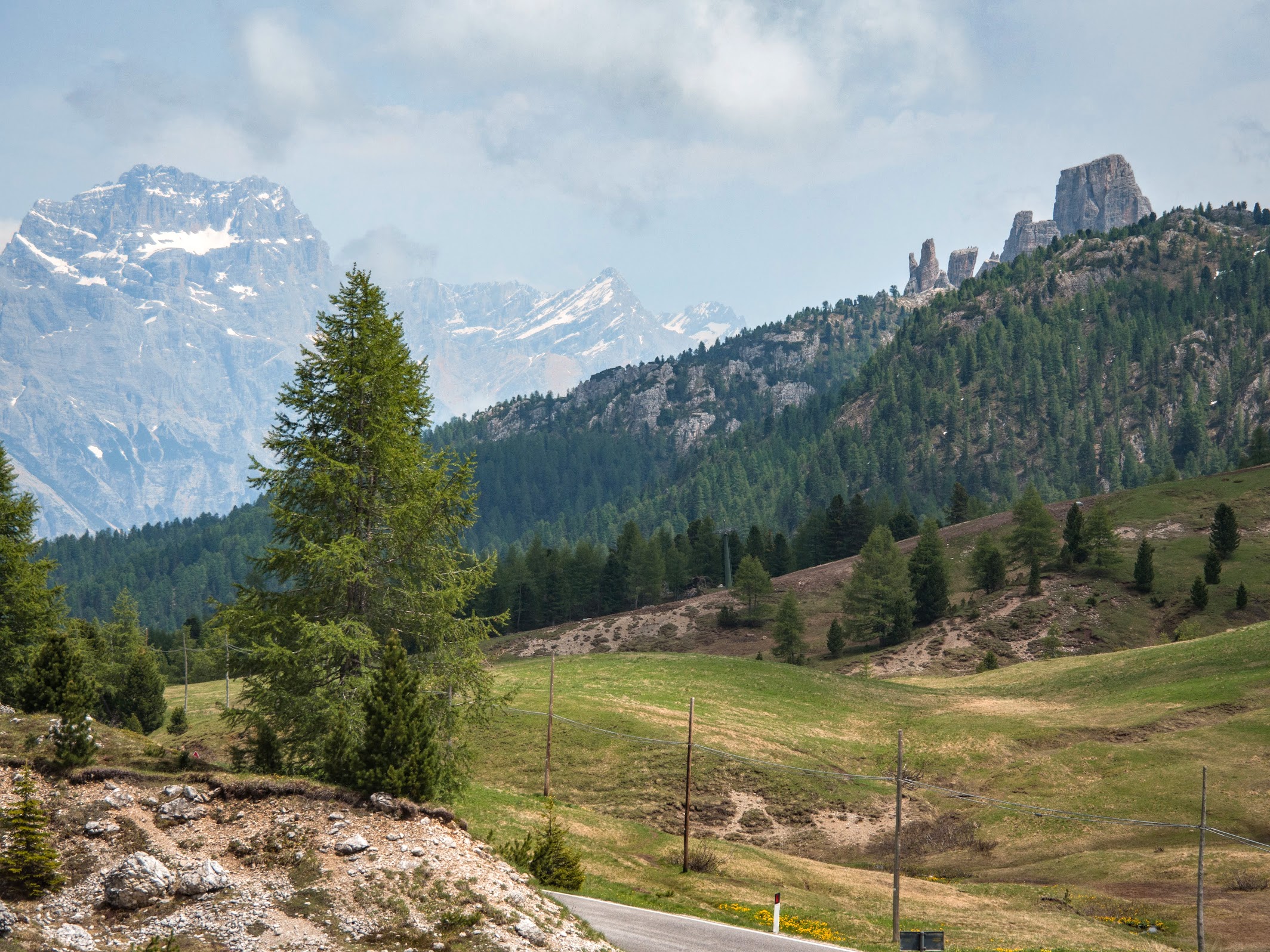 How to Visit Lagazuoi

The Lagazoi tunnels is easily visited from Cortina d’Ampazzo which was where we based ourselves for a few days.

Where to Stay in Cortina d’Ampezzo: Villa Casanova is one of the more affordable apartments in this expensive resort town. Slightly outdated furnishing, but we loved its location. It’s within walking distance of the main street.

Recommended Guidebook: 50 Shorter Walks in the Dolomites from Cicerone.

Shorter Walks in the Dolomites
$16.48 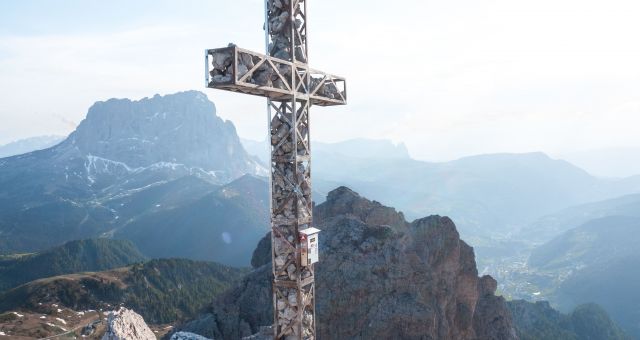