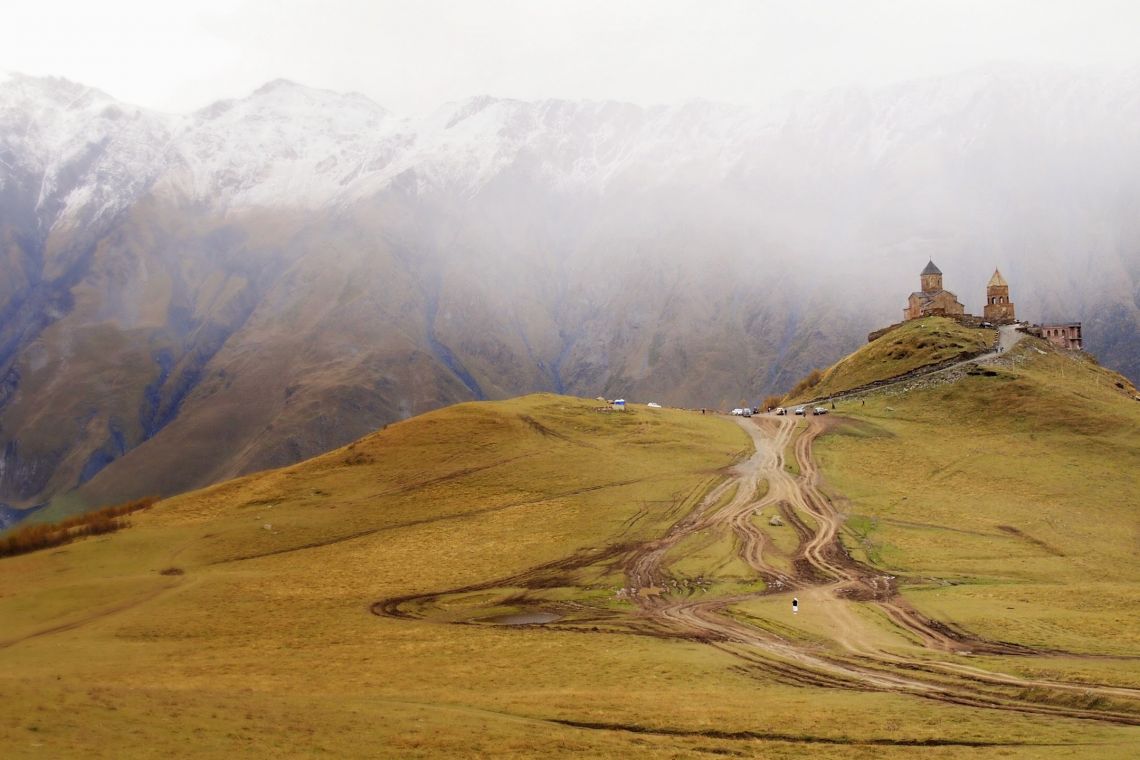 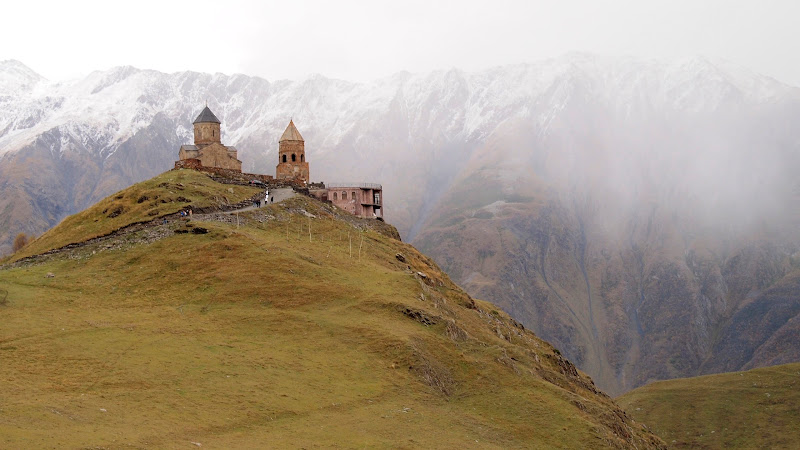 Georgian Military Highway connects Tbilisi and Russia through the spectacular valleys and passes in the Caucasus. It was one of the highlights of my visit to Georgia. It was such a gorgeous drive that I did it not once, or twice, but THREE times.

The highlight of the drive is the Gergeti Trinity Church (or Tsminda Sameba Church) in Kazbegi, not so much for the church itself, but for its spectacular location under the shadows of snow-capped peak of Mount Kazbegi.

There are 3 main ways you can do the drive up the Georgian Military Highway: take a day trip tour from Tbilisi, take a public marshrutky, or a shared taxi. I’ve done all 3 and I thought that this is one of the situations where an organized day tour was worth the extra cost.

It allows you to make stops along the way and there are a few notable stopping points.

The first notable stop on the Georgian Military Road is the Ananuri Fortress overlooking the Zhinvali Reservoir. If you’ve seen the Lonely Planet guidebook for Georgia, this is the castle that’s on the front page. 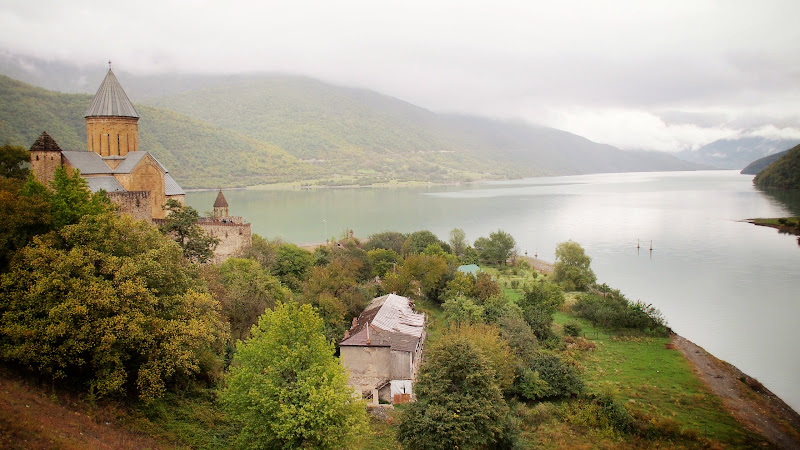 There were a couple of view points we stopped for a quick photo op overlooking the valley from which we came. Too bad the weather wasn’t more cooperative. 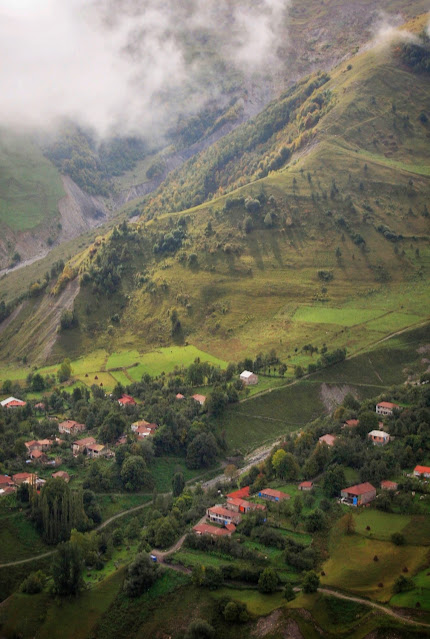 On our way up to Jvari Pass in Georgian Military Highway

Dont forget to load up on churchkhela, or Georgian snickers for snacks on the road. 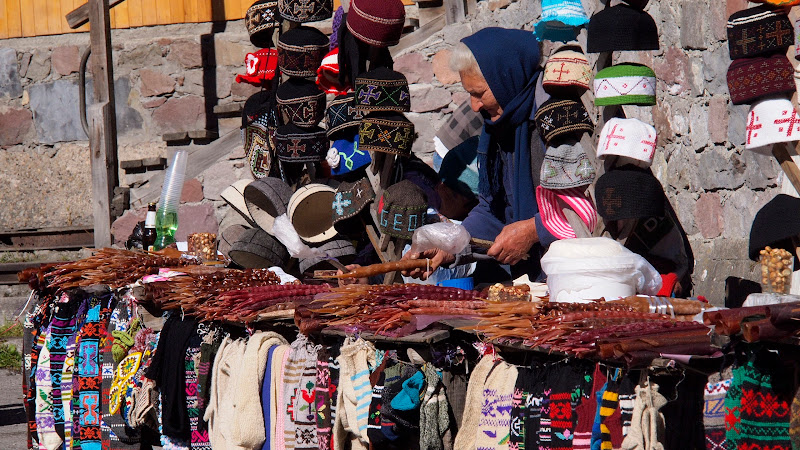 Near Jvari Pass, the highest point of Georgia Military Road, our group stopped to taste some mineral water coming out of a dubious looking hole on a cliffside. It was fizzy and had a metallic aftertaste. Georgians go crazy for this stuff – they bottle it up and sell them all over the country. It wasn’t for me though. 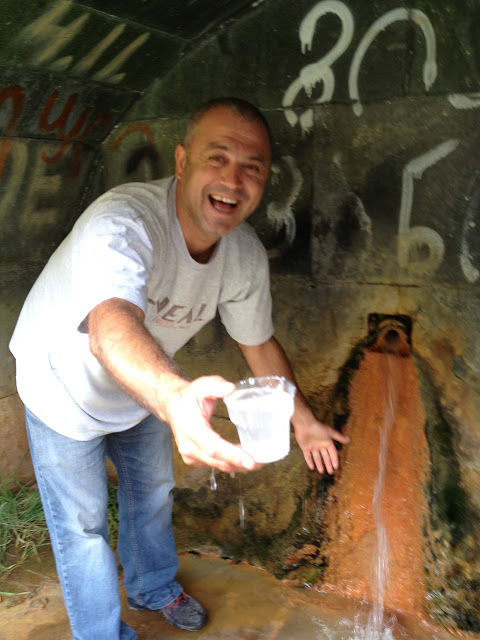 Descending the Tergi Valley towards Kazbegi 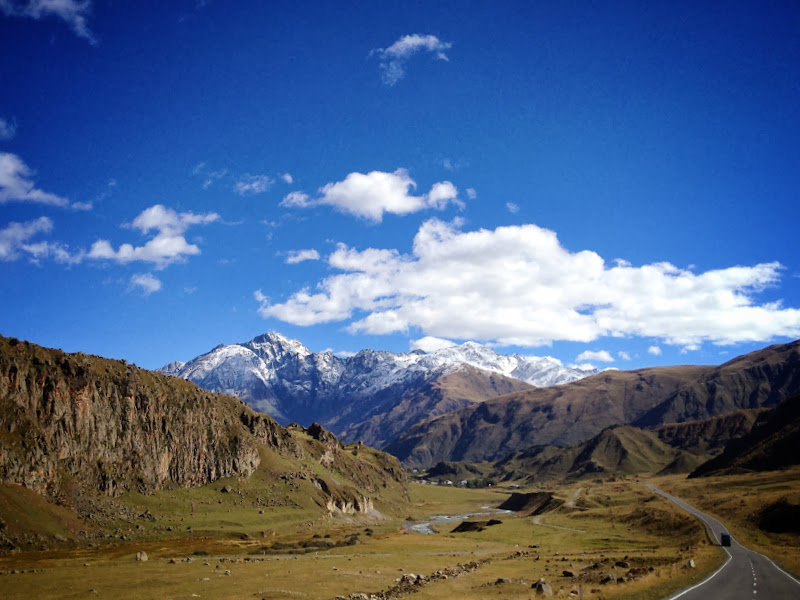 The road to Kazbegi

I saw (too) many churches and monasteries in Georgia and Armenia, but Tsminda Sameba hands down won the ‘Best Location’ award leaving its competitors way behind. Getting up here involves a steep 1 hour climb from the village of Kazbegi or you can take a jeep up. 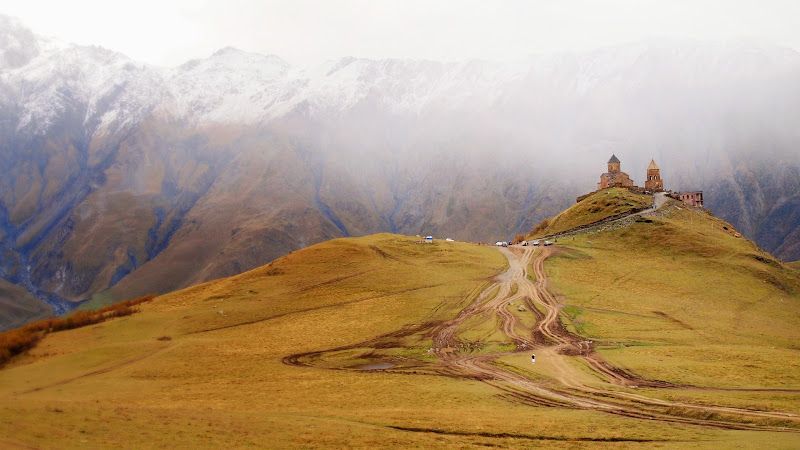 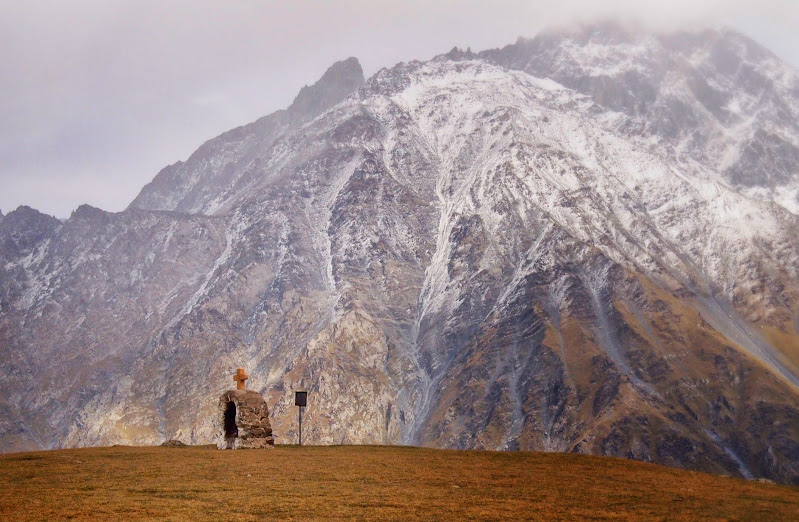 Back in the 80’s the Russians built a cable car from the village up to Tsminda Sameba, but the local villagers detested it so much they destroyed it at the first chance they got. I think I would too.

At the church, a family(?) stopped me for a picture. I thought they wanted me to take their picture, but it turned out that they wanted to take a picture WITH me. Guys, this never happened to me before! How exciting! In turned, I asked for their picture which they happily obliged. Aren’t they the cutest? 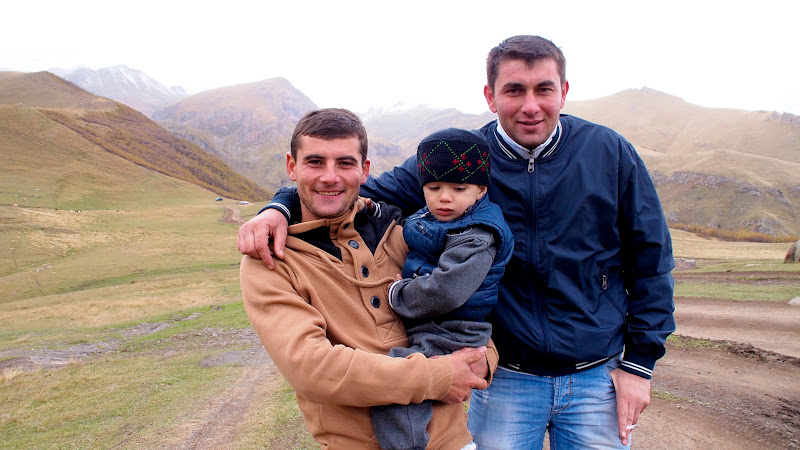 Wait, wa? You wanted MY picture?

There are many trek possibilities around Kazbegi. The reason I came back 3 times is because I wanted to trek up to Gergeti Glacier, but each time it was too rainy and foggy to make the 900 m ascent worth it.

Most people end their trip here before heading back to Tbilisi.

Past Kazbegi and Tsminda Sameba Church, the road gets even more narrow as it enters Dariali Gorge towards the Georgia – Russia border where we could go no further. 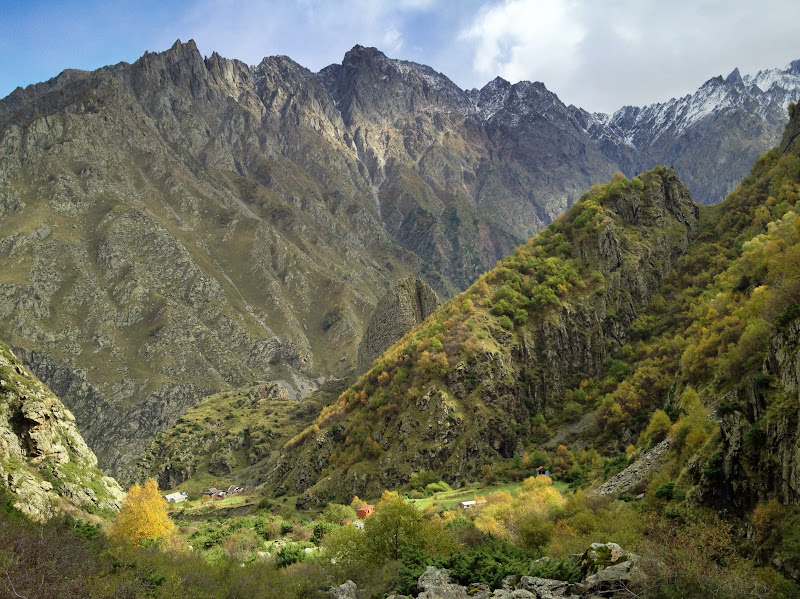 If I were to do it again (and if I were suicidal and had more money), I’d get a rental car and drive the bendy mountain road myself. There were so many side valleys worthy of exploration, so many more spots worth stopping for. But even without a private car, driving up the Georgian Military Highway is so easy to do it’d be a crime not to make it here when visiting Georgia.

You can do this drive as a day trip from Tbilisi, but I’d recommend spending at least a night in Kazbegi. Because otherwise, it means 6 hours on the road in one day.

3 ways to do the Georgian Military Highway

Take a public marshrutky for 10 GEL from Didube station. The hardest part is finding where the marshrutky leaves from inside this chaotic, massive, open air station. Each car has its destination posted on the windshield, but it’s all in Georgian alphabets. The second hardest part is avoiding the taxi touts who will try to convince you to take their taxi instead.

Which isn’t such a bad idea. For 20 – 30 GEL you get a spot in shared taxi. If you bargain well and if you can find other tourists to share the ride, this might work out for the better. With a private taxi driver, you can negotiate extra stops at some of the places I mentioned above. Make sure you clarify this before agreeing on a price.

A day trip tour from Tbilisi costs about 70 GEL, but includes 2 meals (dinner is a huuuuge supra including homemade vodka), a guided trek up to Tsminda Sameba church, and a lot of stops in between. But yes, you’ll be stuck inside a van with about 20 other people. 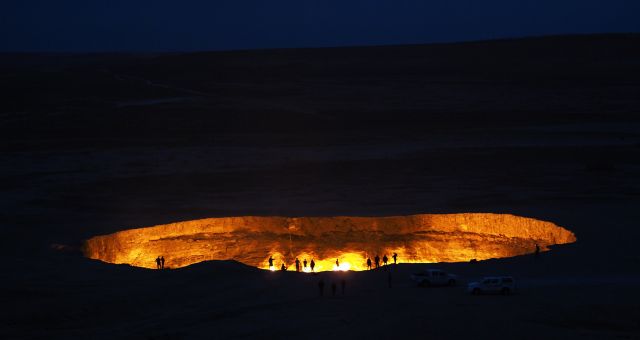