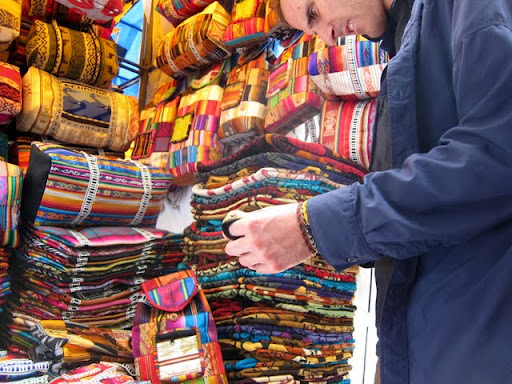 Otavalo is known for its artesans market that’s held every Saturday. We got in to Otavalo after a long day of border crossing from Colombia on Friday and we were excited to see the market.

With Jack’s love for souvenir shopping and my love for bargaining, we had a feeling that Otavalo’s artesans market would be right down our alley.

And it surely didn’t disappoint.

We got there around 8 am, when the market was just getting started. On any other day, the market is limited to the Plaza de Los Ponchos itself but on Saturdays, the main market day, the stalls overflow to the neighboring streets as far as 4 blocks away. 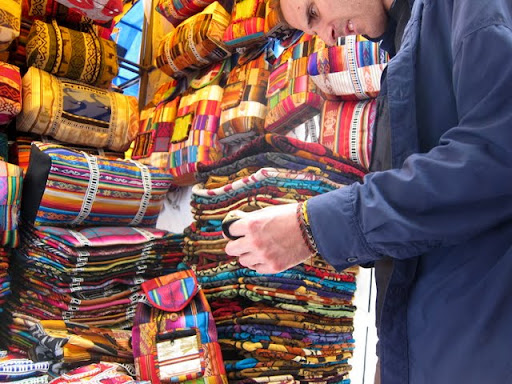 The array of options in Otavalo market, Ecuador 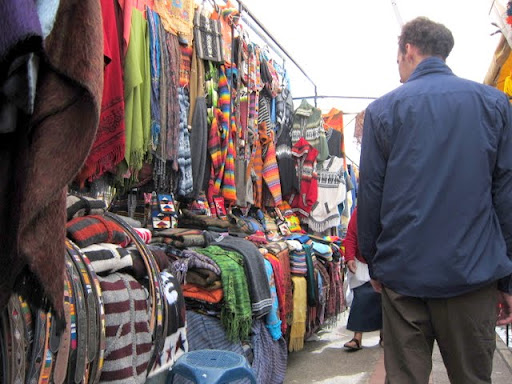 Jack walking among the hundreds of merchandise in Otavalo market, Ecuador

After awhile you start noticing that most are selling the same stuff – the same sweaters, the same bracelets, or the same paintings. But if you look harder, you notice that some of the paintings were of better quality (look out for paintings done on a piece of feather) and some of the materials are better than others.

The colors were amazing. Some of the cloths they were selling in the market were so beautiful they made my hands itchy to touch them, to bargain for them, and to carry them home with me close to my bosom. There were blankets made from alpaca wool with interesting designs (usually llamas), so soft to the touch. The colors are more muted but they were just as tempting.

Seriously, if we didn’t keep reminding ourselves that we’d have to lug around everything we bought there around the world, we’d have been in serious trouble.

Most of the sellers there are native Otavalos – the women would be wearing strings of gold necklaces and dressed in long black skirts and white embroidered shirts, while the men wore a black hat and a dark-colored poncho. Their long hair braided and wrapped in colorful ribbons.

The older women there were deceptively strong – you see them with nary a tooth and hundreds of wrinkles on their faces but at the end of the day, they’ll be carrying everything they’re selling in a ginormous bundle on their backs.

Unfortunately most of them were shy of being photographed, and those that were not shy asked for a $1 for a photo. I don’t really want to pay for photo ops but nor do I want to take pictures without permission, so I’ll stick to taking pictures of the stuff they were selling.

(Curious to know – would you pay for photo ops? Why and why not?) 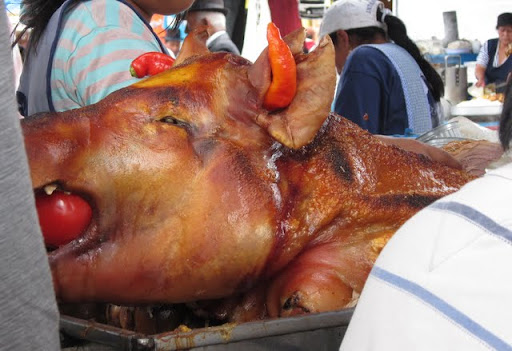 There was a row of stalls selling food – fried whole fish, fried whole pigs, and fried whole chicken. There were also people pushing carts or carrying baskets selling local snacks. Unfortunately we’re still not familiar with the snacks yet so we can’t tell you what they’re called (or even what they are), but one that caught my attention was boiled little black beans, eaten with salt and lime.

Or so we thought, until we looked closer. Ack! Not beans! They’re actually boiled little hermit crabs.

We stopped to get lunch consisting of fried fish and rice ($1.50). Simple but delicious. We decided to skip on the hermit crabs.

There’s actually another market held in Otavalo on Saturdays – the animal market which is located slightly outside the town center. I was intrigued, but decided to skip it against my inner curiosity. Not only do you have to get there early (it starts at 4 am), but last time I went to an animal market I stopped eating beef and chicken. 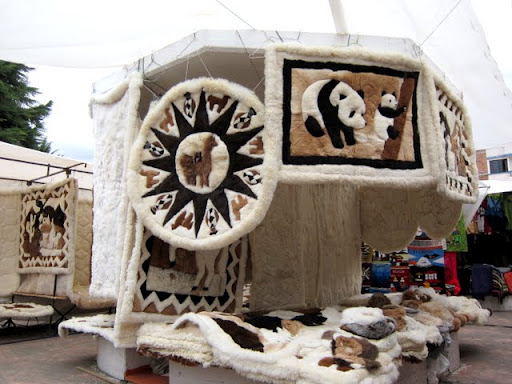 Not sure what they are? Rugs?

When shopping in Otavalo market, bargaining is expected. As a general rule, I usually start with a price already in mind and go slightly lower than that and see where it goes. Unless the price is already ridiculously low. When the opening price of a bracelet is 25 cents, there’s not much lower it can go, is there?

Tips for bargaining:
– Already have a price in mind for how much you’re willing to pay for an item.
– Have fun – if you get there early ask for an early bird’s discount, if you get there late, ask for the end of a day discount. If it’s raining ask for a rainy day discount… you get the gist.
– Watch out for pickpockets. You tend to be less aware of your surrounding when bargaining.

Do you want to check out our loot? 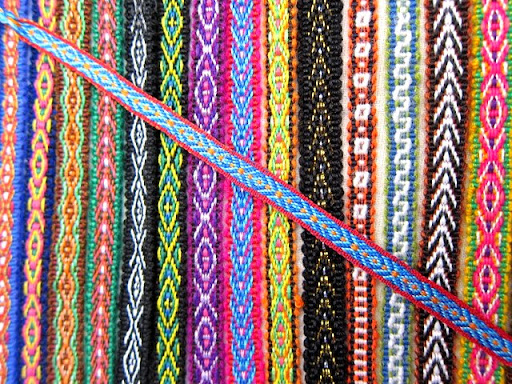 A scarf for $3 – down from $5.
I actually didn’t even want it, but Jack was having too much practising bargaining and before I knew it, they already settled on a price. Once a price is agreed upon, it’s in bad taste to walk away.

An alpaca sweater for $12 – down from $16
Alpaca is supposed to be warmer than wool and softer too. Otavalo is cold. I’m thinking I might get a sweater too.

You might notice that the price is cheap, but not ridiculously cheap. But part of going shopping in Otavalo is not so much to load up on dirt-cheap items (that’s what Walmart is for), but for the atmosphere, for the people watching, and for the enjoyment of bargaining.

You should visit Otavalo market

See more photos from the market:

Where: Otavalo is 2 hours south of the border with Ecuador and 2 hours north of Quito.
When: Check out the market on a non-Saturday day for a quieter experience. We actually prefer it because there’s less options and less duplications on the items sold.
Accommodation: We stayed in Hosteria Rose Cottage, 2 blocks away from the plaza.
Food: Best meal we’ve had in Otavalo: a Mexican place a block away towards the plaza from our hostel, next to a Chinese restaurant.