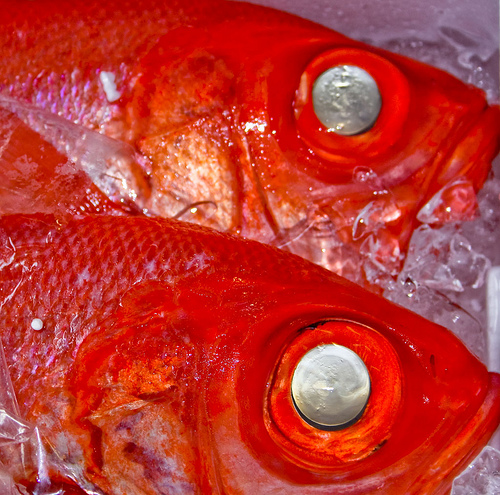 There's something fishy around here - by hitthatswitch

We knew there was something fishy

about the $20 ‘tourist card’ fee the collectivo driver demanded from all the gringos in the taxi.

There were some signs that should’ve raised a lot more flags than they did that day at Tacna International Bus terminal:

– Guy 1 mentioned that it’s only levied for first time visitors (we had never heard anything like it before about Peru-Chile border crossing).
– Guy 2 said something about the fee is for making the line goes faster (as in like a ‘bribe’?).
– The price was quoted as both in Chilean peso and Peruvian soles but the two numbers are off by $4 each. Which is – well, significant.

But we were vulnerable:

– We just had a 6 hour bus ride and it was getting dark outside
– I was sick and really wanted to get across to Arica, Chile as soon as possible

But more importantly:
– We haven’t read anything about the scam> during our research Quite the contrary, we did read something about paying for a tourist card. Now that I looked at that post again I realised that the blog poster fell for the scam without realising it and that the scam has gone up from 15 soles to 50 soles, all within 4 months.

Because we’re so used to rely on hearsay and on our own research, we’ve learned to ignore our own instincts that were sounding the alarm with a gigantic hammer labeled ‘Use only in case of impending idiocy’.

So these guys really knew what they were doing on how to take advantage of the situation, because we went from ‘No, this is crazy. I’ve never heard that we have to pay.’ to ‘Well, maybe we missed something and they’re right?’

Between the guys rushing us around and being pushy and me being sick, and the only other gringo in the taxi having paid up – we paid too (the cheaper of the 2 ‘versions’ of the price).

As soon as we got the hostal in Arica, I looked around the net and I found the only other account of the scam online: http://www.lonelyplanet.com/thorntree/thread.jspa?threadID=2074223

It does seem to be a relatively recent scam since I only found the thread after researching a weird combination of searchwords. The regular keywords such as “Peru – Chile border crossing” didn’t seem to bring up that one thread.

Realising that because of this, there will be a lot more people falling for the scam, I had half a mind to do the 2 hour drive back to Tacna, Peru to confront the guys and to warn the others. But Jack mentioned, half-jokingly, that it might get us both killed. With $20 a person, it’s a big money maker.

So I thought I did the next best thing: put up warning on travel forums online and hope others doing their research about this particular Tacna – Arica border crossing will come across it.

And go back to my zen center and hope karma will get the best of those scammers.

And try to remember the lessons learned from the scam:

– Try to cross the border during the day (psychologically it helps us from feeling rushed).
– Only pay ‘visa fee’ or any kind of immigration fee really to custom border officials.
– Be careful of anyone wearing giant cold chains around their neck (ok, maybe not really).

On the bright side of things…

The Tacna – Arica border crossing itself was a piece of cake – very smooth and orderly. So now, we’re in Chile!

I have to say that nothing like being scammed colored our opinion of a country, that’s why I’m glad those guys said they’re Peruvians. We really, really want to like Chile – our host for the next weeks or so.

We have been impressed so far: friendly people and cars that actually stop for pedestrians on sidewalk (I know! Crazy, huh?). And oh, their soccer team is better too – they just kick Peru’s ass in their latest match: 4-2.