Getting Scammed Buying Batiks in Yogyakarta, or Not

She was desperately trying to get rid of the Indonesian guy who was following her footsteps. Harassment is too strong of a word, but the blond girl was visible annoyed. As they passed, I overheard the guy saying, ‘So, you already know about tonight-only batik exhibition?’

Not until the next day did I realise what that scene was all about.

Our turn to get approached

We were walking along Malioboro browsing the various t-shirts, souvenirs, keychains, and what not. Jack was a little ahead of me and I noticed he was carrying on a conversation with a guy with a very wide smile who seemed to be giving Jack some sort of a direction.

Being the pessimistic person that I can be, I was like ‘Uh-oh… an overly friendly local in a touristy place. That can’t be good.‘

The guy went on saying,

‘The batiks on Malioboro are low quality. Very expensive. You need to go to this place… it’s an art center where students learn to make batiks. Much cheaper and better quality batiks.’ 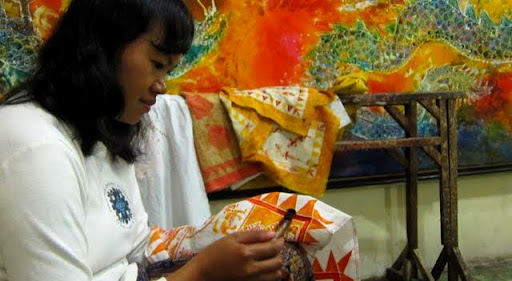 A 'student' at 'Novi Art Studio'

Our scam alert went off the radar.

What threw us off was the fact that he didn’t insist on taking us to the place. He pulled out a map (how convenient that he happened to have a map with him) and drew us the direction to get to ‘Novi Art Center’.

Headfirst into the scam

Well, we didn’t have anything planned for the rest of the day so we decided to check out this so-called batik ‘Art Center’. It’s about 10 min walk from Malioboro and located off a small alley.

Inside was a very big collection of batik paintings of various qualities, each was given an ‘A’ to ‘ZZ’ rating with ‘ZZ’ being the most elaborate and thus most expensive.

I didn’t know much about batiks, but there were some very pretty and colorful batik paintings there. The patterns varied from traditional characters to abstract splashes of colour. When you held them against light from a window or an open door, the colors came alive.

Check out the video below to get an idea at how varied and colorful these paintings are:

I kept wanting to tell Jack to stop looking so interested (haggling lesson no:1), he was practically drooling. But that’s the hard thing about shopping in Indonesia: the merchants understand BOTH Indonesian and English (we have to come up with a third code language).

The guy was a pro and observed very quickly that Jack was the weaker point. He stopped talking to me altogether and was catering completely to Jack’s wishes.

‘You like the dragon on silk, Sir? How about this much-bigger one we have? Big dragon, Sir. Made by famous artist.‘

At this point Jack would like to intercept to say that:
‘It wasn’t drool — I just took a sip of water and some got on my chin. Stop exaggerating.’

Don’t get me wrong, I wouldn’t mind having some of these batiks on our walls. But I was wary of starting a negotiation without knowing a base price. The salesmen kept bringing more and more paintings out. Whenever he noticed we were interested in a particular style or color, he’d bring out the larger version of the painting.

After haggling back and forth for almost an hour, we ended up with 3 large paintings for $200.

Now, do we think that the guy with the map was being paid by the place?

Are the batiks genuine?

I was told that a genuine batik doesn’t have a front or a back. The dye goes through the cloth making the pattern indistinguishable on both sides. A ‘fake’ batik is produced by a machine and the dye would only show up on one side. If you turn it over, it will be obvious that it’s the ‘wrong’ side.

The batiks that we got from the place look the same on both side. So maybe they’re real? Who knows. 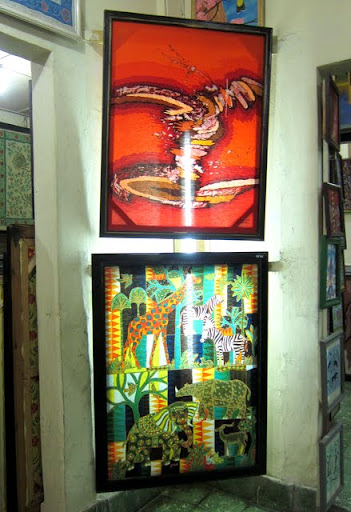 The 'Mahyar' we got is very similar to the bottom one

We were sure from the very beginning that we were walking into a crafted scenario. We were told that the shop was only open on Mondays and Tuesdays, and guess what day it was when were there? Tuesday. Subliminally they were saying, ‘You can’t come back tomorrow. Today is your last chance to buy.’

But we also wanted to buy the batiks. We bargained really hard and ended up paying 70% of the opening price. Later on in the day, we checked out other ‘exhibitions’ (also courtesy of other friendly locals) and we could happily say that both the selection and the quality of the batiks at ‘Novi’ was much better. If we had found similar types of paintings in these other stores for cheaper, we would feel really bad.

And thus we left Yogyakarta pretty happy with our purchases. I guess that’s all that matters.

Now we’ve just had to hold on to our batiks until after we came back from our RTW trip — whenever that happens to be.

Other notes:
– Sometime the person would claim that the shop is a government-sponsored shop and the price is fixed by the government. Don’t fall for it. Always negotiate the price.
– Beware of those saying today is your last chance to buy them because they’re either being shipped off somewhere or today is the exhibition’s last day.
– The two main batik paintings we bought were signed ‘Mahyar’ and ‘Novi’. A quick Google search revealed that they’re both, indeed, well-known Indonesian batik artists. Looking at the prices online it seemed that we did score a decent bargain after all.