I loved my time in Flores, Indonesia and I regret not spending more time on this island. Admittedly, I’ve only been to a itty bitty tiny percentage of Indonesia’s 13000+ islands, but of all the Indonesian islands I’ve been to, Flores is a favorite so far (my 2nd favorite? Belitung).

My time in Flores was spent island hopping, going on motorbike rides among lush countryside, and of course, hanging out with komodo dragons at Komodo National Park. 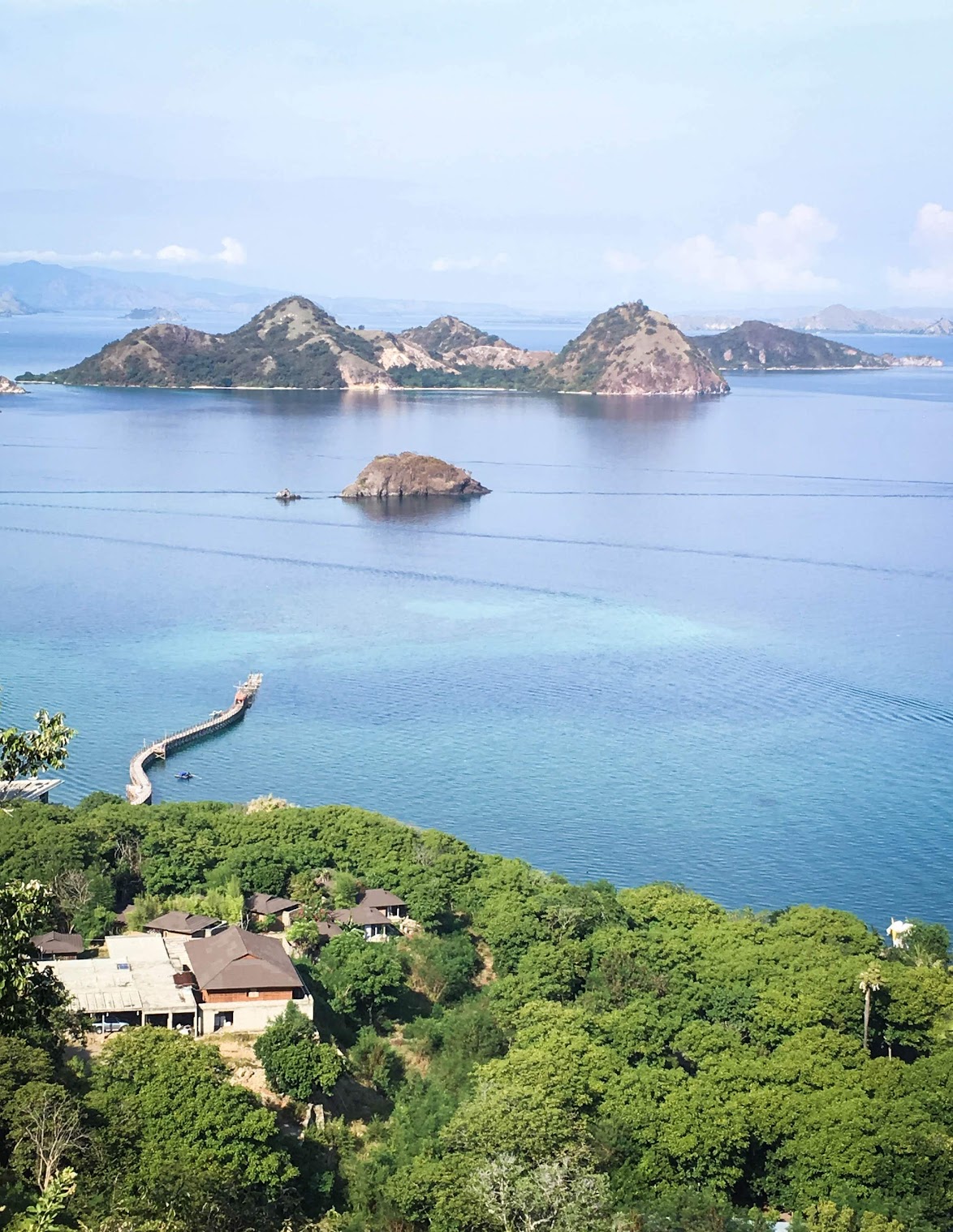 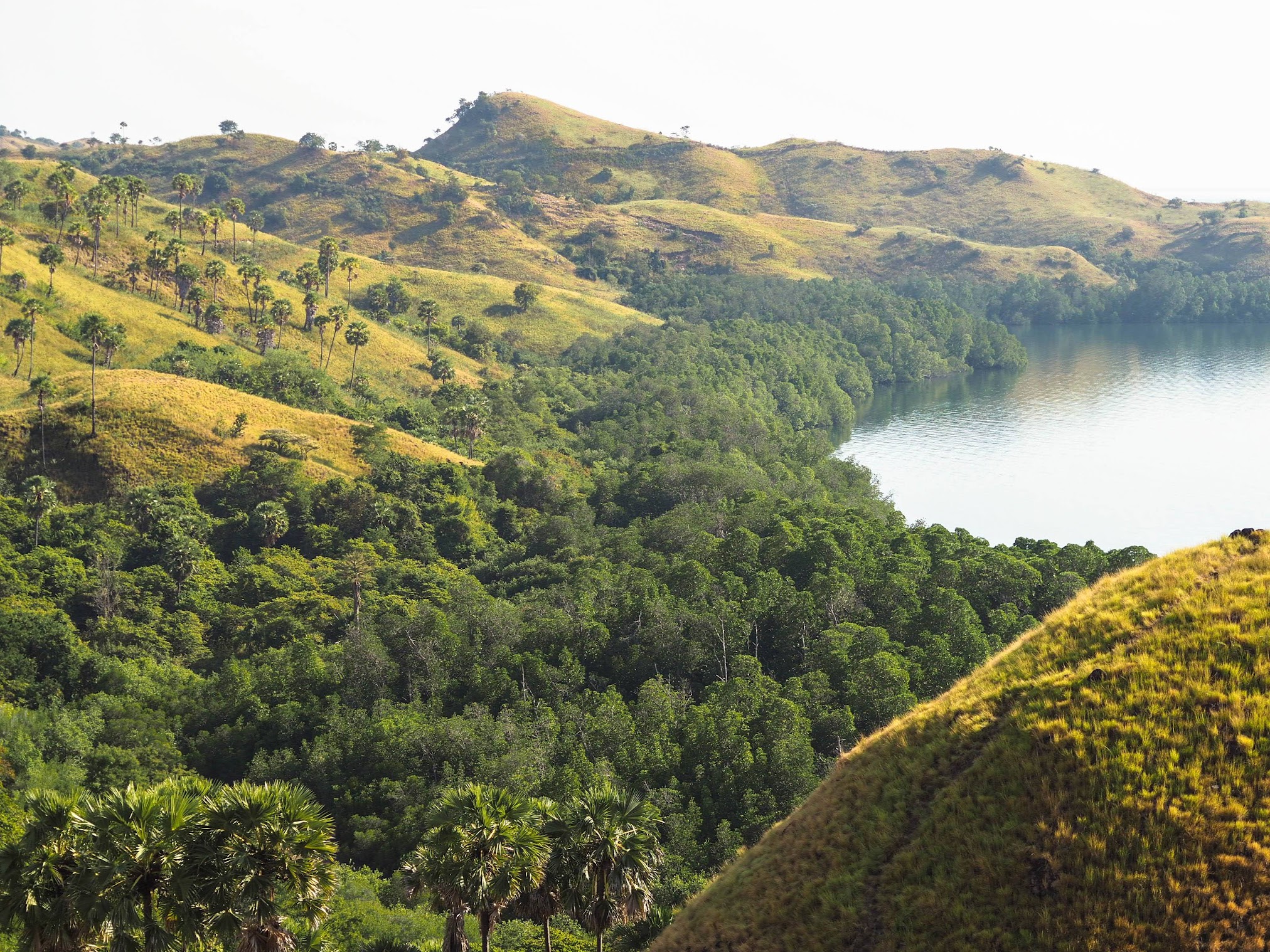 Labuan Bajo is the main travel hub of Flores. And whether you fly in from Bali or Jakarta, or if you arrive by boat you will eventually find yourself in this small, dusty fishing village.

Many people use Labuan Bajo, Flores as a launching point for trips to Komodo National Park, home to the world’s largest lizard. Komodo dragons can grow to a maximum of 10 ft in length. Listed as “vulnerable” by IUCN, they can only be found here in Indonesia, in a handful of islands around Flores. Two of these islands are Rinca and Komodo Island, both are within the Komodo National Park and a few hours boat ride from Labuan Bajo.

Despite the tourism boom, Labuan Bajo is still a very small town with one main road running through and along the waterfront. On this street, you can find restaurants (for legit Indonesian food, go to Warung Mama), tour agencies, dive shops, grocery stores, hostels – anything one might expect from a backpacker-friendly town.

There’s no need to book your komodo boat trip before arrival. Any of the dozens travel agencies on the main road will be able to set you up with a boat, often for the very next day, for cheaper than what you can find online. Higher price usually means better boat and better food. Usually. It’s never guaranteed. Unfortunately, there’s no way to verify which boat you’ll end up in.

Find a place to stay in Labuan Bajo.

I chose Ciao Hostel because its location – up on a hill above Labuan Bajo town – promises a view. I was not disappointed. Guys, I had breakfast with this amazing view every morning. The AC is cold (always important), the dorm rooms are clean, and the staff was all smiles. It’s a 20 min walk to town, or you can take the hostel shuttle (leave hourly). 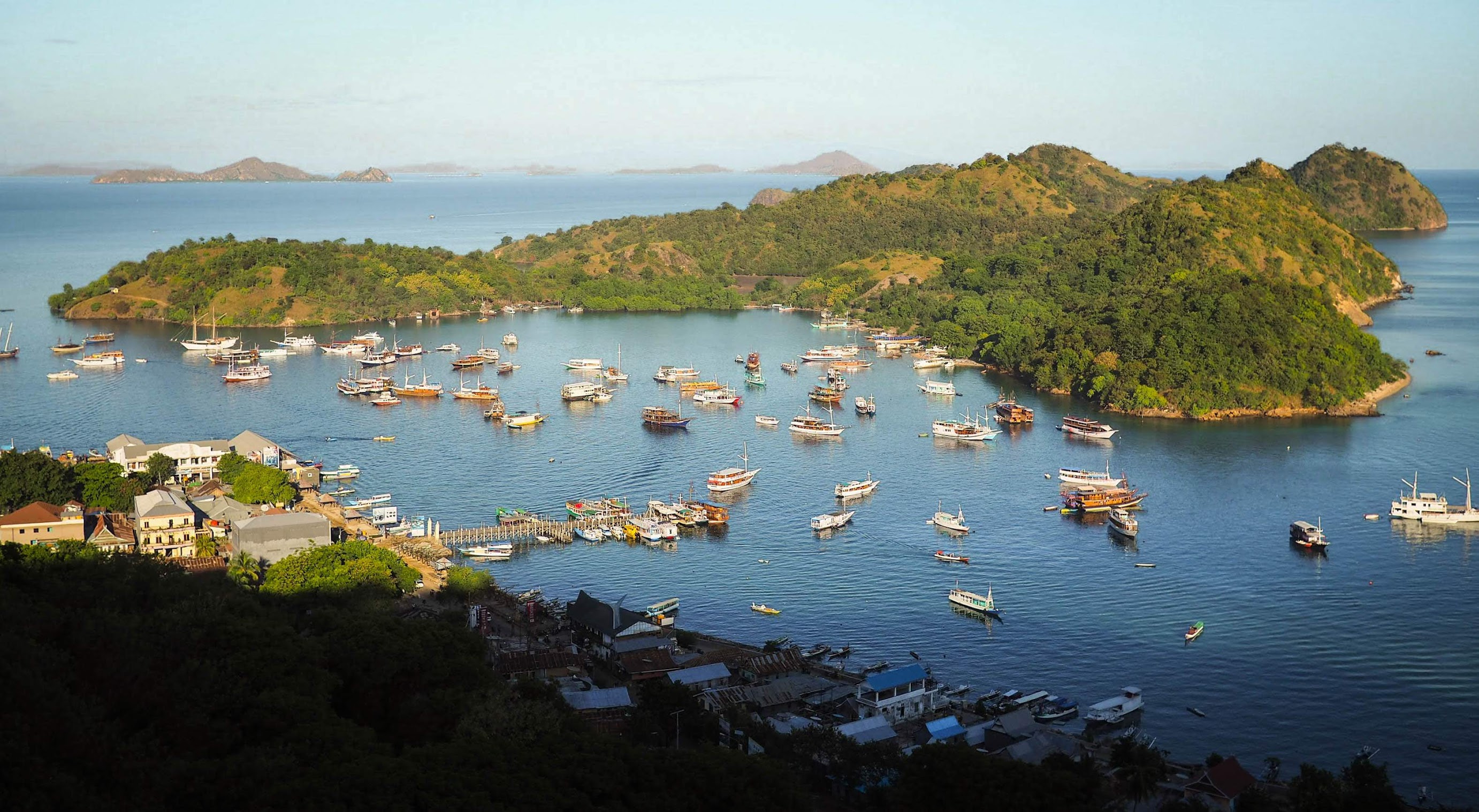 I organized my 2D/1N komodo boat trip from the tour desk in Ciao Hostel. The cost is Rp 850,000.00 ($59) per person, excluding entrance fee to Komodo National Park and Kanawa Island (which is privately owned).

You can definitely see Komodo dragons as a day trip from Labuan Bajo. As a matter of fact, Ciao Hostel offers both. The itinerary is very similar, the only difference is that the one-day itinerary excludes Padar and Kanawa Island.

Flores is the 10th biggest island in Indonesia, and the water surrounding Flores are dotted with smaller, mostly uninhabited islands. If you walk down the main street in Labuan Bajo, you’ll see tour agencies offering itineraries that include a mix-and-match combinations of these islands. Most will include a visit to either Rinca or Komodo Island. But instead of Kanawa Island, you might go to Gili Lawa or Kelor Island. Some even offer 3D/2N or 4D/3N komodo boat tours. The possibilities are endless.

My Island Hopping Boat Trip to See the Komodo Dragons 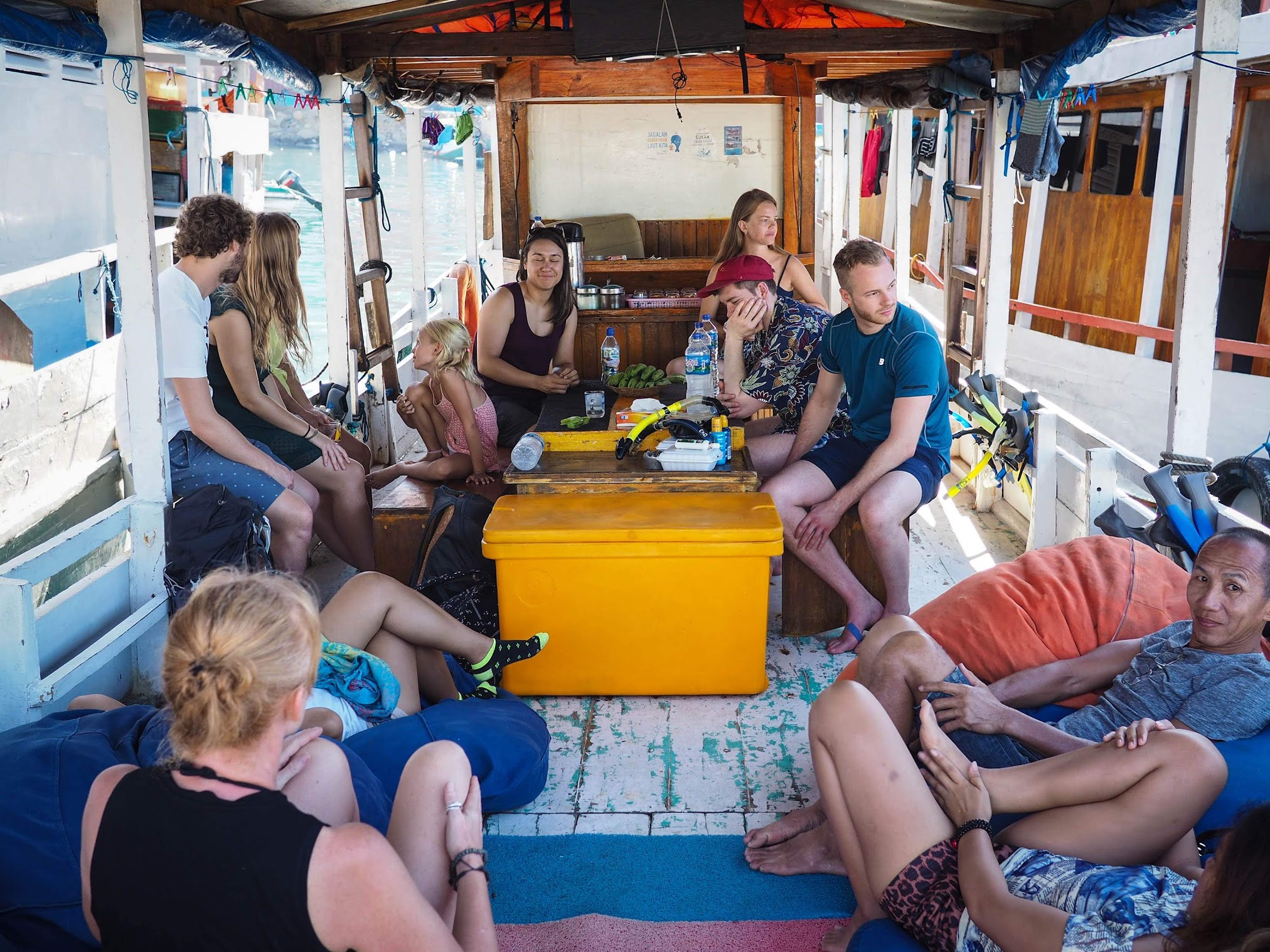 Our komodo tour boat. We sleep on the upper deck on thin mattresses. 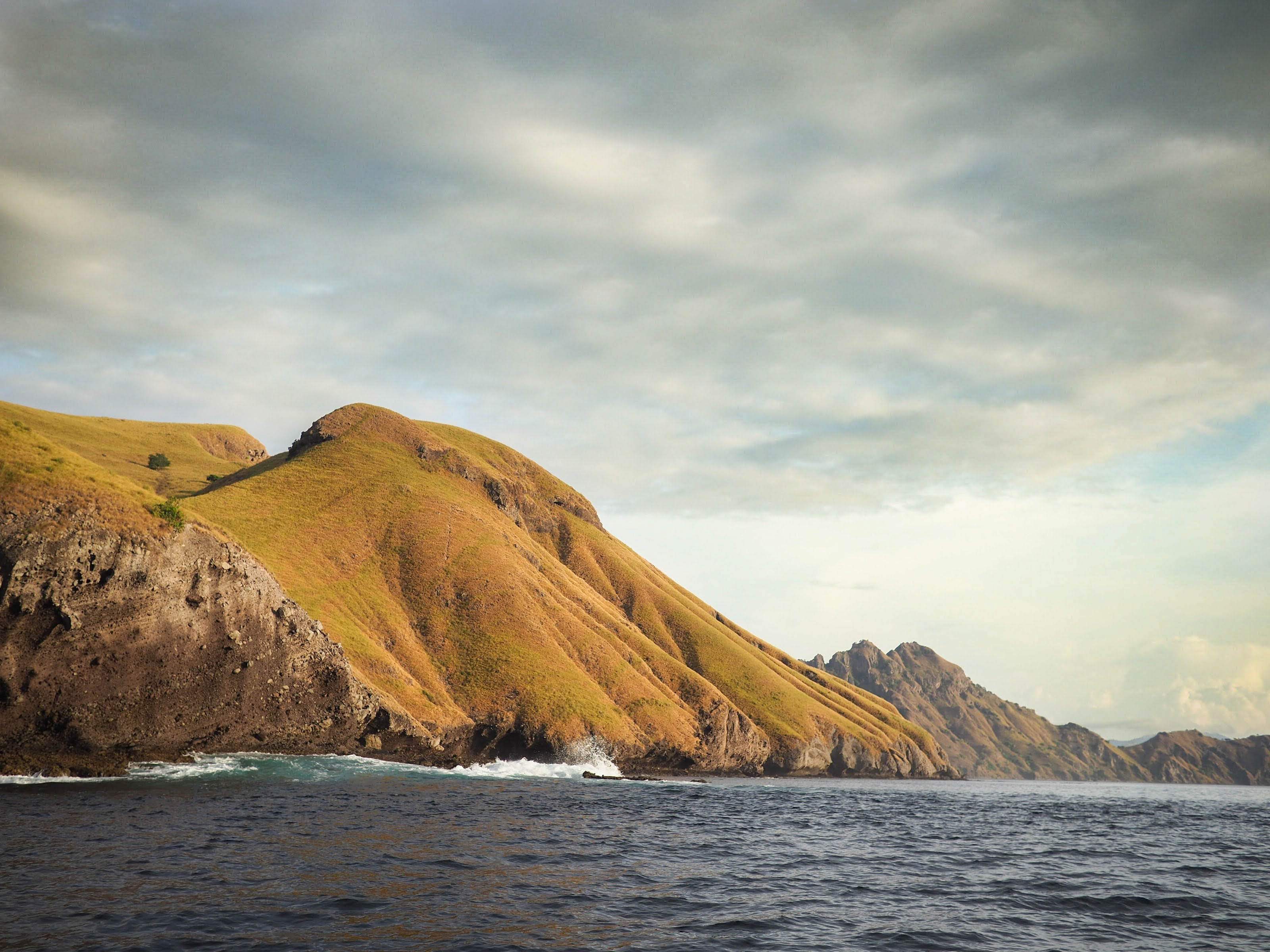 The 2D/1N komodo boat trip organized by Ciao Hostel include a stop at both Rinca and Komodo Islands, along with Pink Beach, Padar Island, Manta Point, and Kanawa Island. 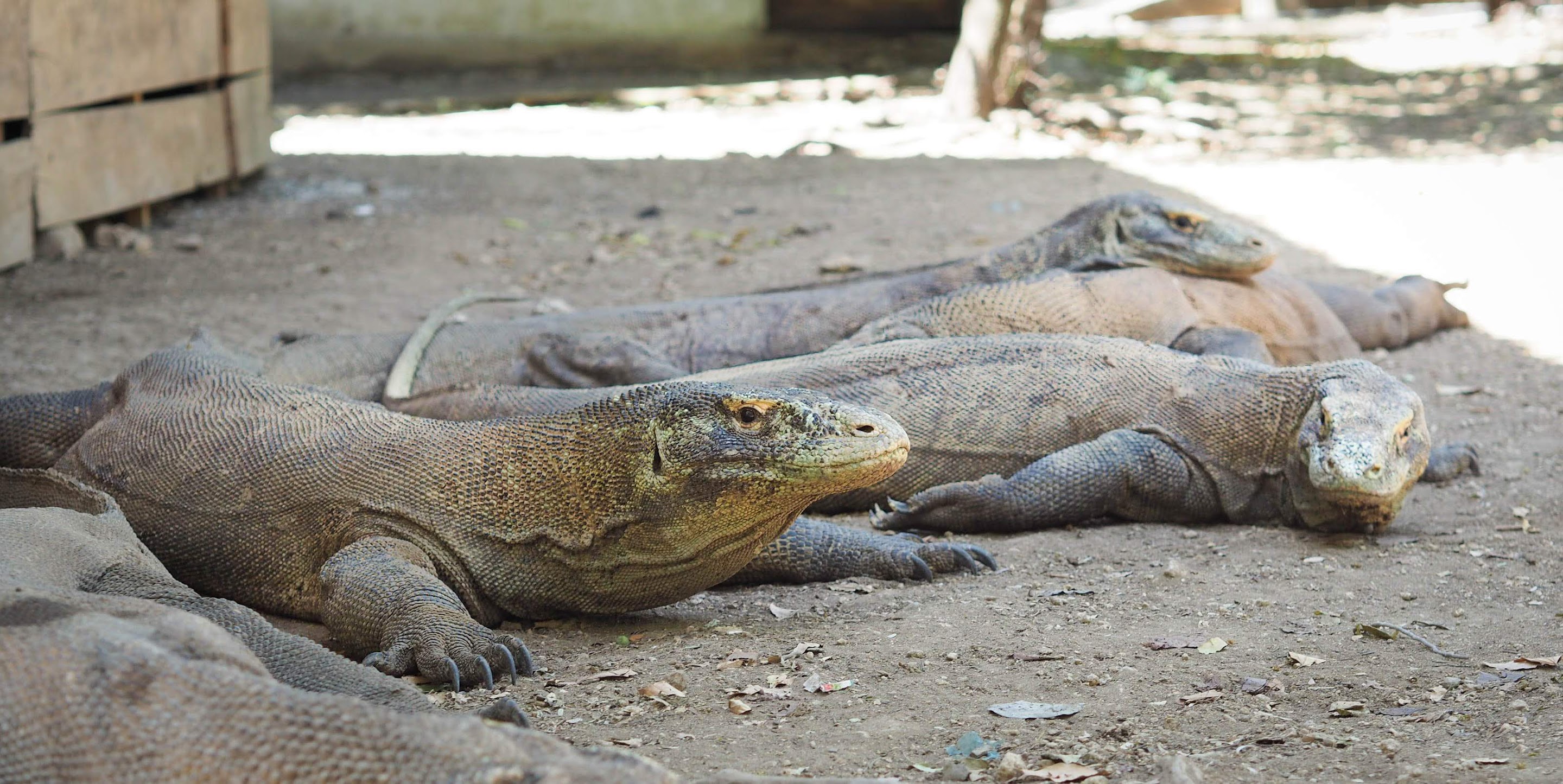 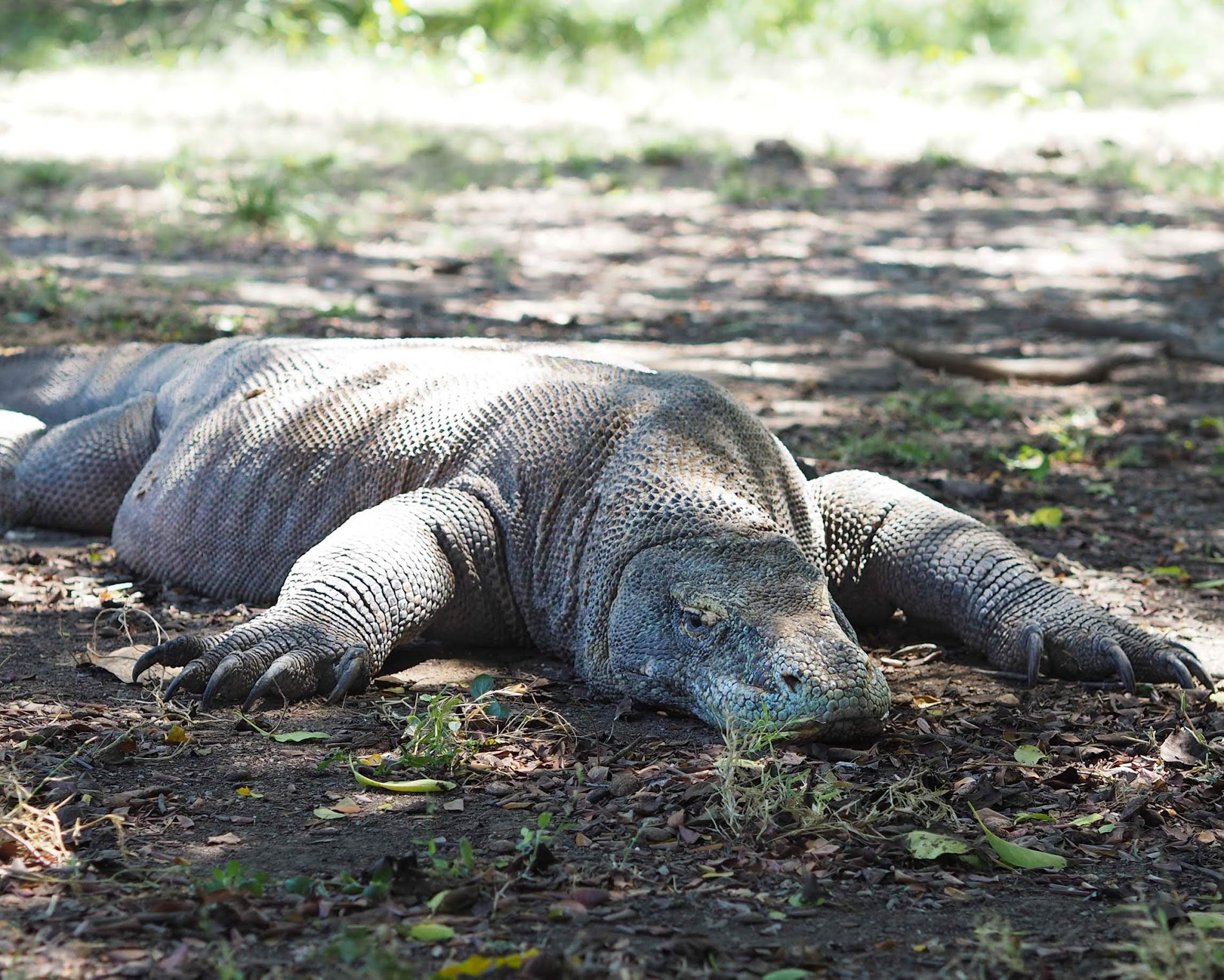 Rinca Island is one the islands where you can find Komodo dragons. I was told that even though most people want to visit Komodo Island, Rinca might be a better island to see the dragons. When we were in Rinca, a few dozens dragons were hanging out by the rangers’ kitchen and sleeping cabins. We noticed that all the structures were raised to prevent the dragons from entering, because apparently these giant lizards can’t climb steps.

Because of the heat, they were very inactive and docile looking. I gotta say, it was hard to see them as carnivorous, giant, poisonous lizards that they are.

As we were walking towards the office, we spotted a komodo walking nonchalantly ahead of us. It was the only komodo we saw in Komodo Island despite valiant attempts by our guide to find more. I think it was just bad timing. 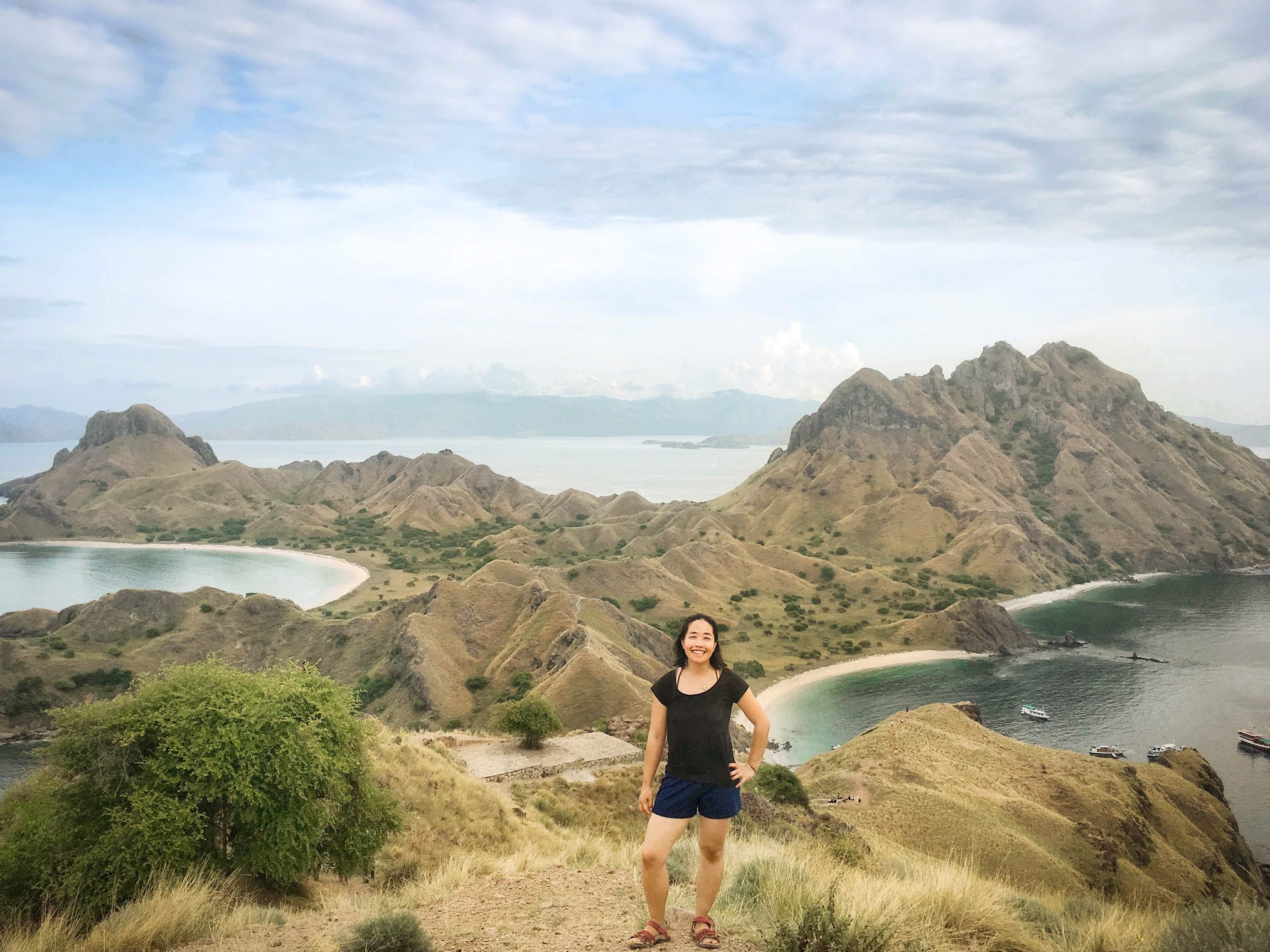 Insta-famous view of Padar Island, Indonesia. It was a sweaty uphill hike, but even after seeing this view on the Internet, it still blew my mind.

Padar Island offers a dramatic view of curving coastlines and sharp peaks from its highpoint. The Internet has made Padar island Instagram-famous and there were quite a few ladies hiking up to the viewpoint in flowing dresses and heels. Many ended up taking off their heels and carrying them during the hike when they realised that the hike to the viewpoint might be short, but steep and loose.

Oh, and it was hot as well. I was pouring water out of every single pore on my body. I’d never sweat much in my life. 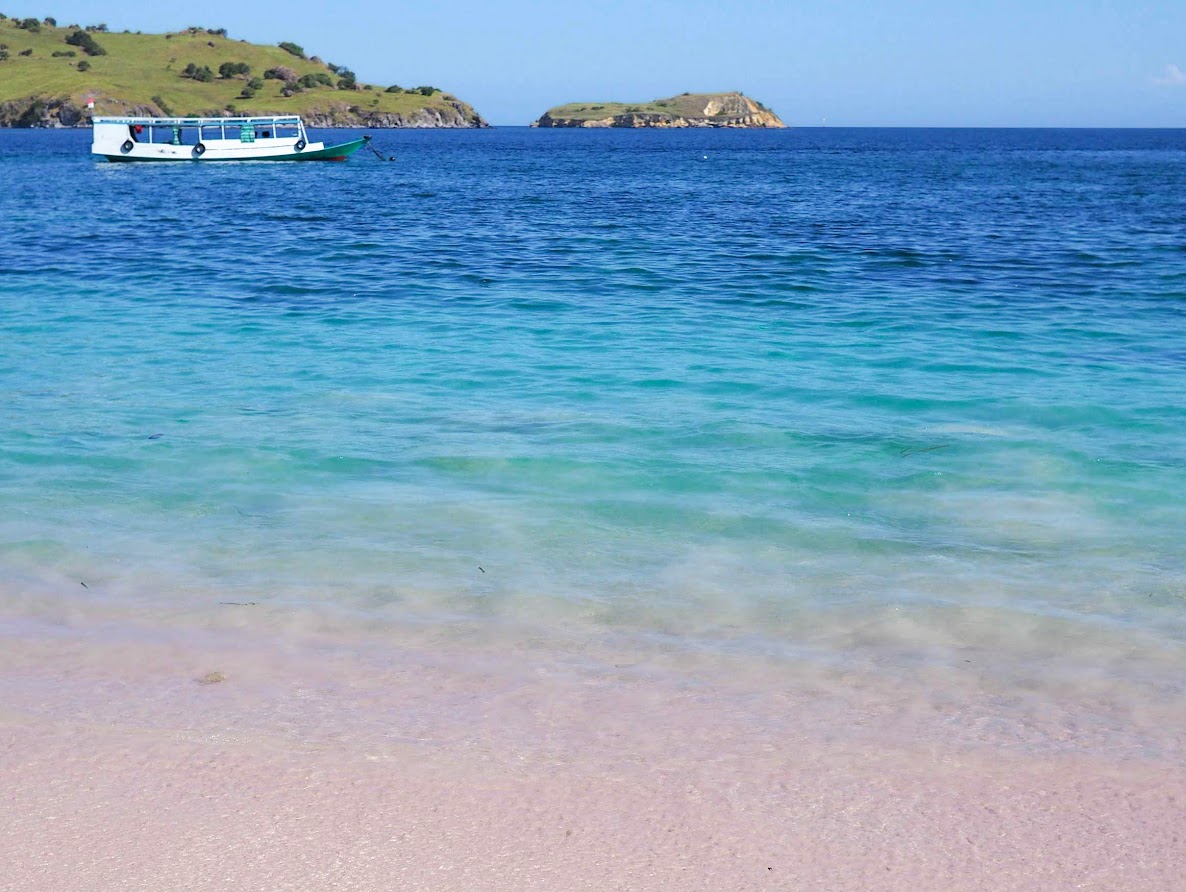 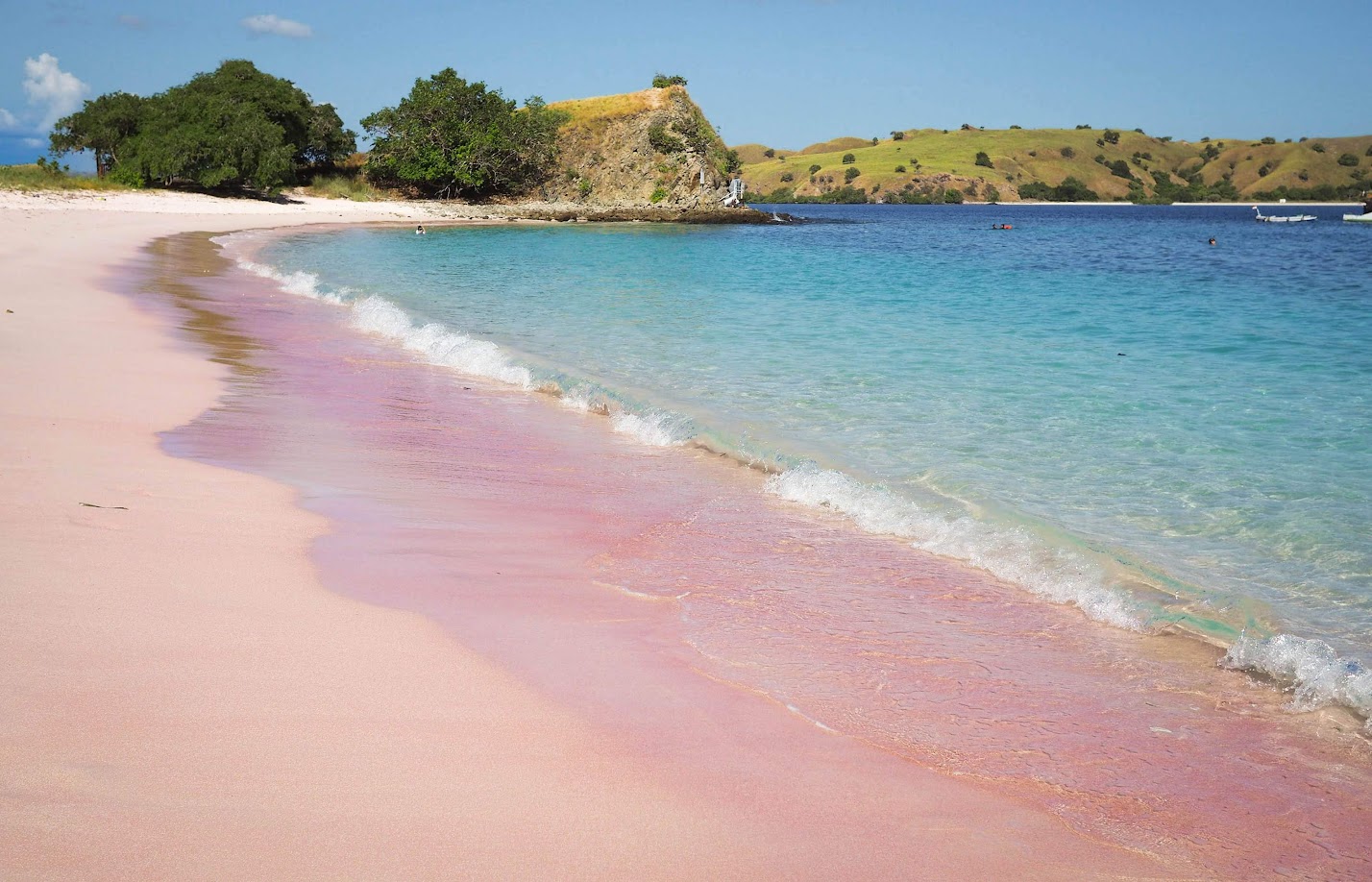 I’ve seen photos of Pink Beach on Instagram and I thought they were all Photoshopped. I didn’t have a high expectation. But it turned out that the pink beach is really pink! There’s actually more than one pink beach around Flores. We went to one that’s part of the Komodo National Park. The soft pink sand, the gentle waves, and the beautiful corals made Pink Beach my favorite stop on the komodo boat trip.

The stop at Manta Point was confusing because nobody warned us what to expect. For one, this is not an island, but a stretch of deep water strait that for some reason is the preferred hang out spot for manta rays. (my guess has something to do with nutrient-carrying current).

One crew member will try spot mantas from the bow, and when he screams “Mantaaaa!” you jump in the general direction he points to. So be ready with your flippers and mask by the side of the boat. Mantas swim fast so only the best swimmers in our group got to see them. I *think* I spotted one. It’s hard to tell because the water’s deep and mantas will not necessarily swim close to the surface. Once the mantas swim away, you climb back onto the board, and the process stars again. It’s not unlike my time swimming with whale sharks in Mexico.

The snorkeling in Manta Point is supposed to be really good. But I can tell you that where we were, it was way too deep to snorkel. 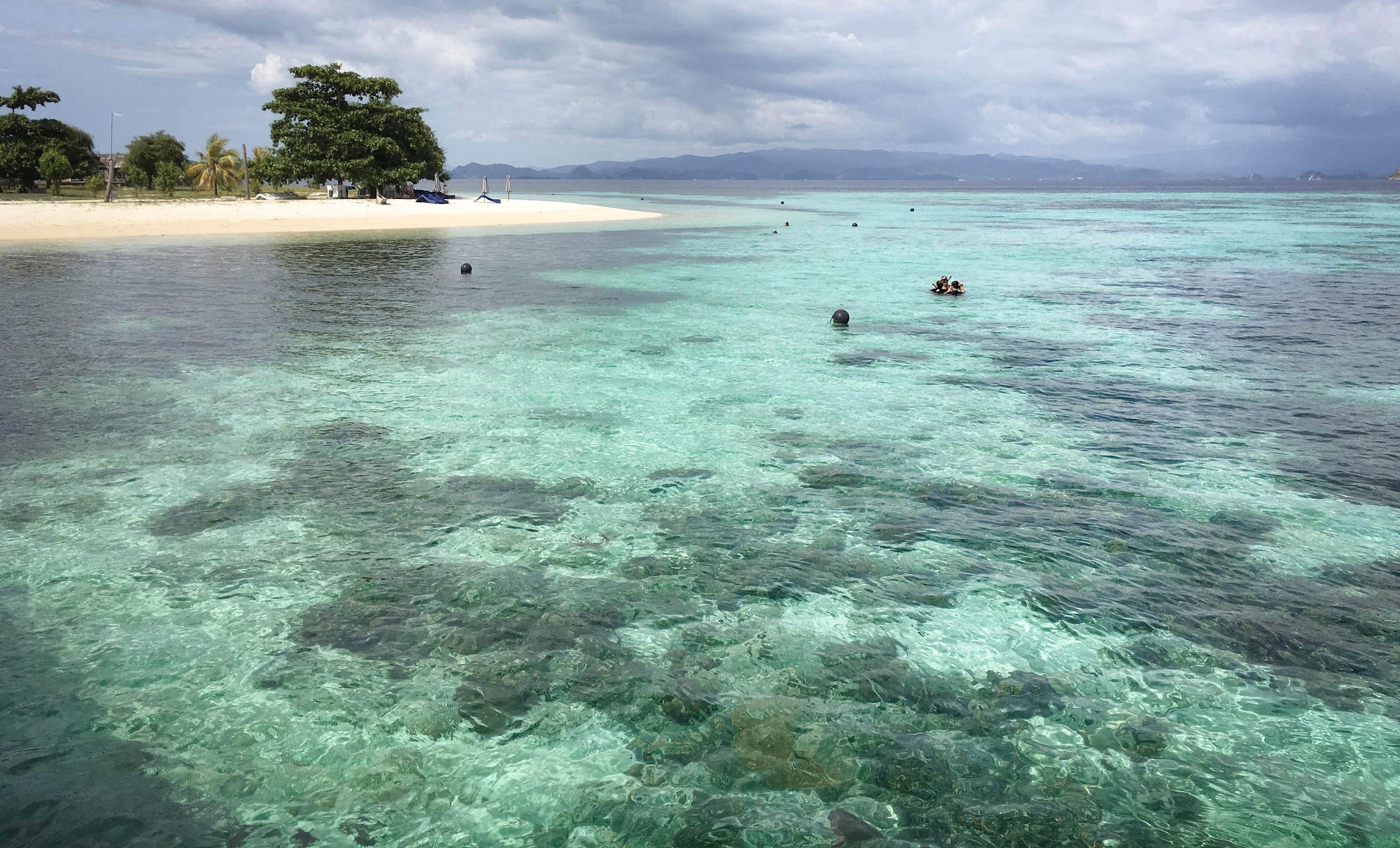 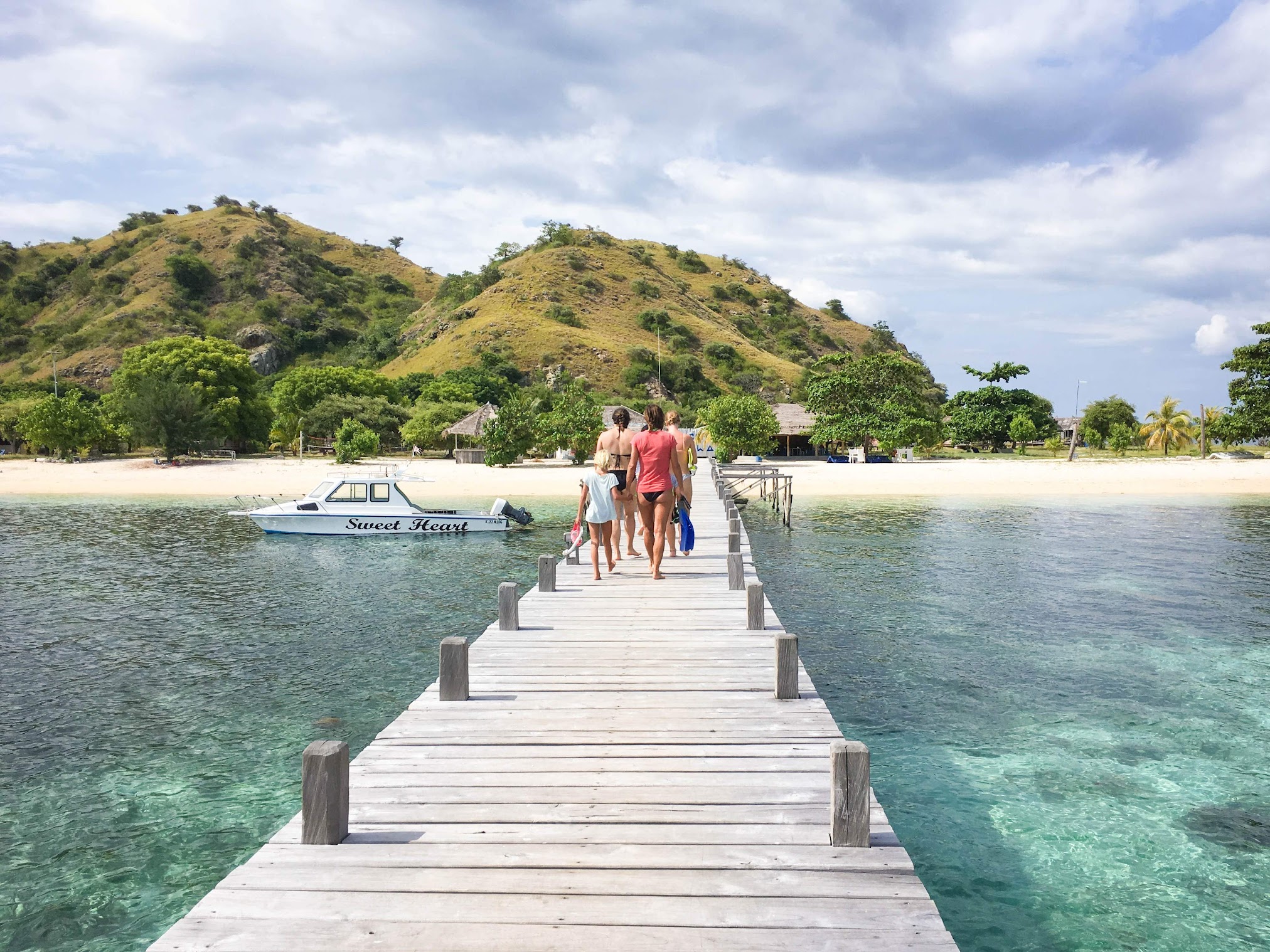 Kanawa Island is home of Kanawa Beach Resort, the word “resort” here is being generously applied – nothing more than half a dozen ramshackle huts, an overpriced restaurant, and beach chairs lining the white sand beach. The snorkeling was pretty great though. We saw tons of starfish here.

Deet-free insect repellant. There are no mosquitos on the ocean, but there are oh-so-many in the bushy jungles of Rinca and Komodo Island. Picaridin has been proven to be just effective as DEET, plus it’s safe for all types of fabrics.

Sleep sack – Because you don’t know the last time those mattresses and blankets were washed. Mine is nothing fancy, but it works.

A travel towel – There’s a fresh-water shower onboard. Bring a towel.

Lightweight dry bag – Our boat can’t land on Pink Beach, so you’ll have to swim across (or pay a small boat to shuttle you over). I’m so happy I had my dry bag with me so I can take my phone.

Snacks and alcohol – The crew cooked great food but I could’ve used extra snacks. Something about being in the water always makes me hungry.

—
Back in Labuan Bajo, I got off the boat with sun on my skin, salt in my hair, and a smile on face. What a lovely way to spend a few days. I wish I had more time explore the countryside surrounding Labuan Bajo, but I had a flight to catch. It’s time so see Kelimutu Volcano and its 3-colored lakes.

A little bit on Flores

The majority of Flores population is Catholic – a remnant from Portuguese occupation in 16th century. This makes them a minority in Indonesia, the biggest Muslim country in the world. They have curly hair and darker skin. These factors contribute to the discrimination they often face when trying make a living outside Flores.

Staying in Catholic convents in Flores: one of the most intrepid things you can do in Flores is to rent a motorbike to independently tour the island. In small villages where there are no hotels/guesthouses, your best bet is to make your way to one of the Catholic churches. Most often than not, they’ll have a room for you. If I were to return, I would so love to do this. 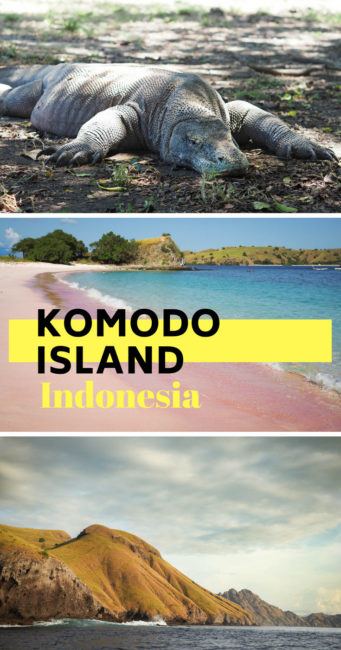