“So, who’s ready? Vamonos! Who’s first?… Amigos?” – the captain looks around. All 8 of us looked back at him in silence.

A minute ago, all 8 of us were brimming with excitement about the prospect of swimming with whale sharks in Mexico. Now that we’ve seen the whale sharks – hesitation creeps in. These guys are HUGE! Some are longer than the 30-feet boat we’re in. The surface of the water was bubbling with 200 or so whale sharks feeding off planktons. It just didn’t look… safe.

200 of the biggest fish in the ocean and we’re about to jump in in the midst of them.

In rare moments I find myself fully embracing the “live free, die young” spirit – and it was one of those moments. Swimming with whale sharks is the main reason we came to Mexico after all. Surprising myself and Jack, I found myself waddling forward. “Ok, I’m ready” and swung my legs around so I was sitting on the side of the boat. I tried to ignore the little voices inside my head (you know, the ones called “common” and “sense”?)

“Free Willy!” – the guide screams and we both jumped in.

The bubbles cleared off my vision and was replaced with a wall of white speckled, rough skin of a whale shark. He was bigger and closer than expected. Fighting the urge to scream and clamber back onboard I start kicking my legs to follow alongside the gentle beast. I noticed the small fish swimming along underneath it, the scaly skin with white and grey spots – even the fins are spotted. Gills half of my height were opening and closing. The black beady eye of the beast seems oblivious to puny me.

The instructions were: keep a distance of 2 metres away and don’t touch the sharks. And swim to keep up with them.

The first part was easy. I had no desire to touch or bother these guys more than necessary. Keeping your distance was both easier and harder said than done. 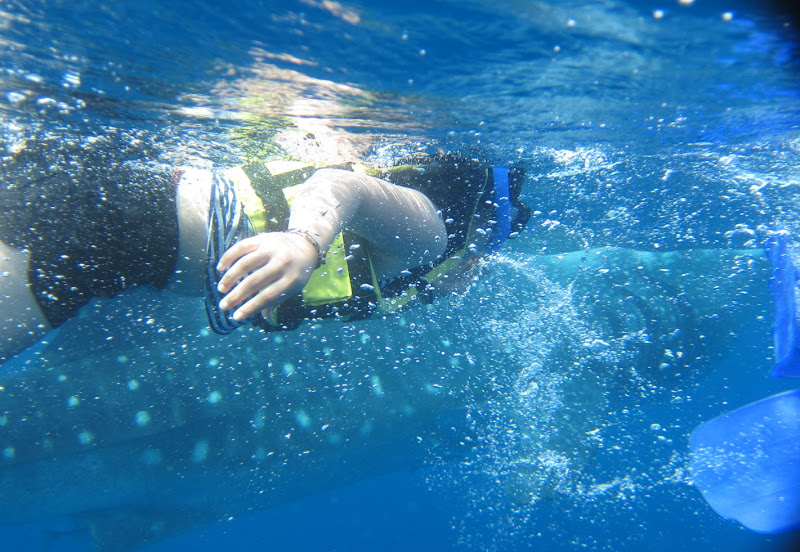 The sharks move easily in the water, effortless. I assume it’s their equivalent of lounging on a beach chair and eating nachos. We, the humans, have to swim as hard as we can just to keep up.

Suddenly, the beast changes direction and I find their tail coming right towards my face.

BRAKES!! I ungracefully tried to reverse my momentum to avoid the tail the size of a man’s trunk.

And just like that, the beast swam away and I found myself bobbing up and down in the open ocean.

The realization sunk in – I’m surrounded by sharks. Giant sharks. Large spotted fins are all around me. God knows what else is hiding under the water (did I mention I fear the deep ocean?)

I wave to the boat! I’m done – pick me up! Half hyperventilating out of fear and half hysterical with excitement I climb up the ladders, blubbering words of assurance to the others, ‘That was amazing!!’

Both Jack and I jumped in a couple of more times before sea-sickness hit me like a train and thus rendered me useless for the rest of the trip.

What a rush! I still can’t believe that I was lucky enough to not only see these magnificent animals but also to swim so close to them. Sometimes I feel like the luckiest person on earth.

How to Swim with Whale Sharks in Mexico

The shark season in Yucatan is from May – September.

How to get to Isla Mujeres
A short ferry ride from Cancun 70 pesos one way.

How much does it cost to snorkel with whale sharks in Isla Mujeres, Mexico?
From $80 – $125 (USD) depending on the boats and your bargaining skill. May and June is the low season and the boat needs a minimum of 6 people so you can try to get a cheaper rate. But all boats go to the same place.

Who did we end up going with?
We were going to go with Captain Tony Garcia, but he didn’t have enough people on that day so we ended up going with his friend. Just get yourself to Isla Mujeres and you’ll see places offering the experience. This whale shark snorkelling tour came recommended by friends.

How does swimming with whale sharks work?
It took us 1 hr – 1.5 hr to get to the sharks. Only two people + guide can be near a shark at any given time. So we take turns. 2 people in the water, 2 people will get ready to go next. You can be in the water as long as there are sharks around and as long as you can keep up. When the sharks swim away, they ask you to get back on the boat so they can move the boat to where the sharks are. You have to wear either a life jacket or a wet suite.

So you’re not in a cage?
No – you swim right among them: alongside, on top, wherever. These guys are plankton eating giant beasts so they’re not going to go after you.

Do you get seasick?
Horribly. While we’re waiting for our turn, they turn off the motor so the boat moves with the swells. Almost everyone on the boat ended up throwing up at one point or another. Don’t eat anything spicy for breakfast since it burns twice as bad on its way out (speaking from personal experience).

Is it worth it?
It depends. Have you always wanted to see and swim with giant animals in their native settings? If so – yes, yes, yes. I think if you dive, this might be a ‘tame’ experience by comparison. But if you’re a snorkeler, like us, this is one of the few chances you’ll have to swim with whale sharks.