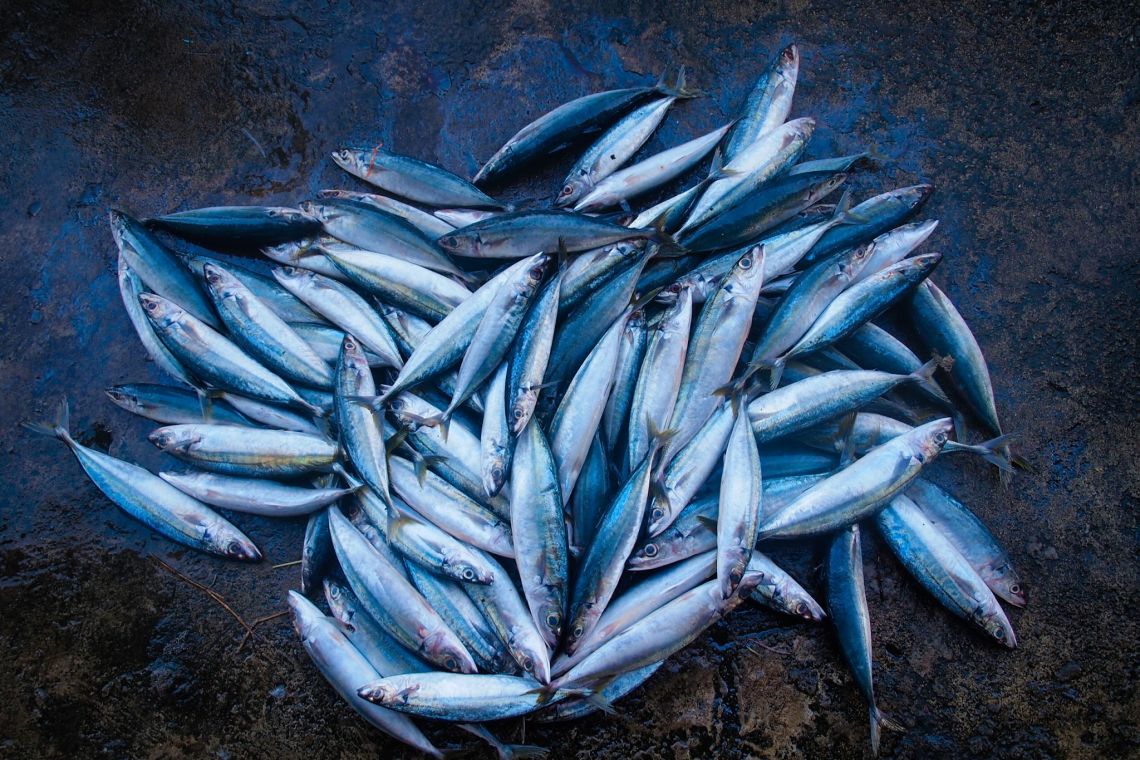 Getting old sucks. I’d never had problem with jetlag before but the last 2 years I’ve noticed that it’s taking me longer and longer to recover from trans-ocean flight.

It was thus the case during my trip with Cinnamon Hotels in Sri Lanka that every morning at 4 am I’d find myself wide awake. And STARVING.

In a way this was a blessing in disguise. I got to enjoy the beautiful grounds of various Cinnamon properties at pre-dawn lights. (The sunrises in Sri Lanka are amazing!) 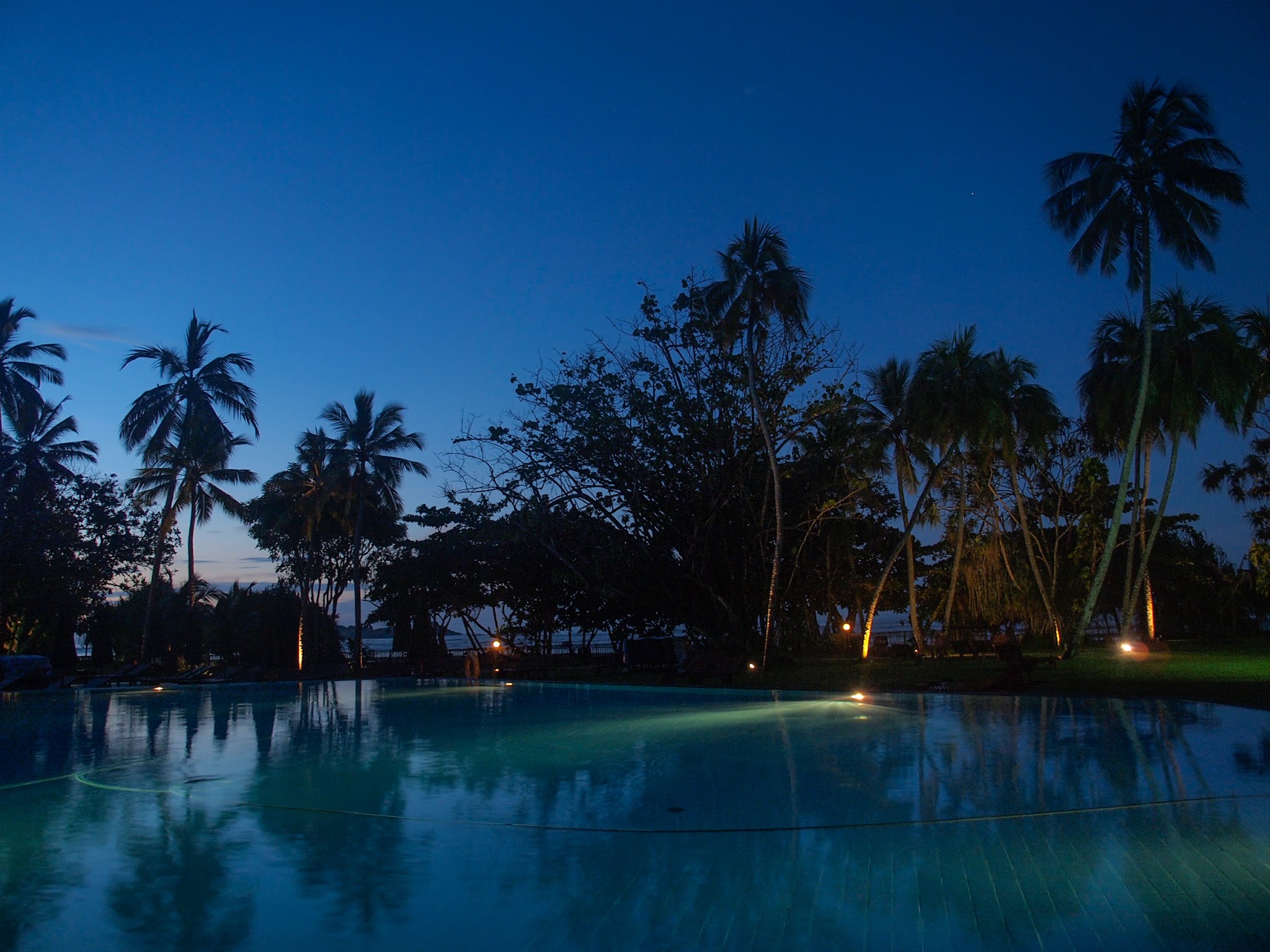 In Beruwala, the kind desk worker, after spotting me prowling around the lobby suggested I checked the nearby fish market. “It’s best to be there early in the morning, preferably before 7” – it was 6 am. Perfect.

From the smell and sight that greeted me as soon as I entered the Beruwala Harbor, I knew I was in for a treat.

Being the only foreigner and female in the market, there were a lot of stares. Can one truly get used to being stared at? I’ve gotten my shares of curious stares but it still makes me awfully uncomfortable. I squared my shoulders and plunged into the chaos.

And chaos it was indeed. People were yelling their wares, bargaining, unloading bucketfuls of fish off the boats. From mantas to sharks to giant tunas that require a chainsaw to turn it into manageable pieces. Does the ocean really have this much fish to spare? 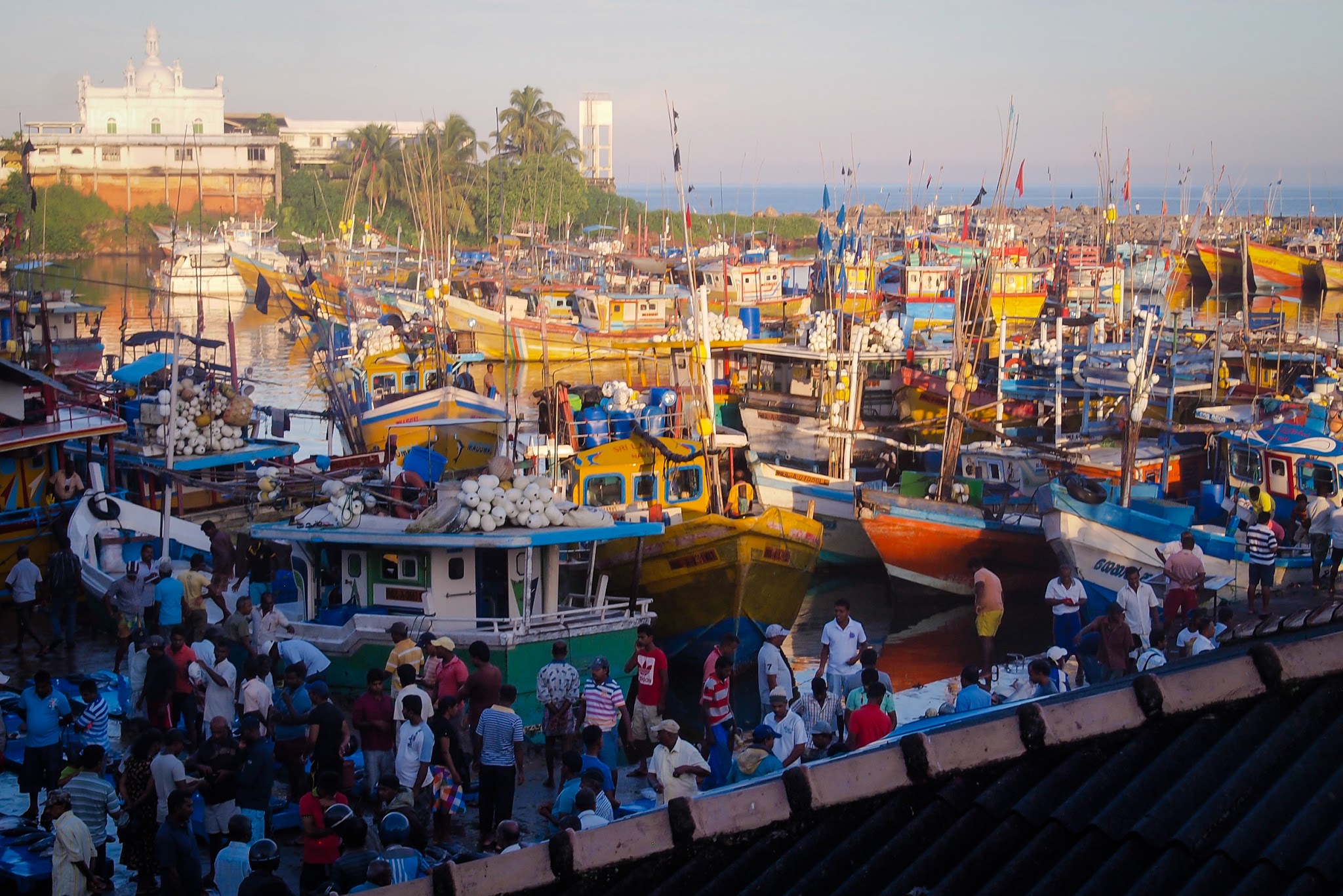 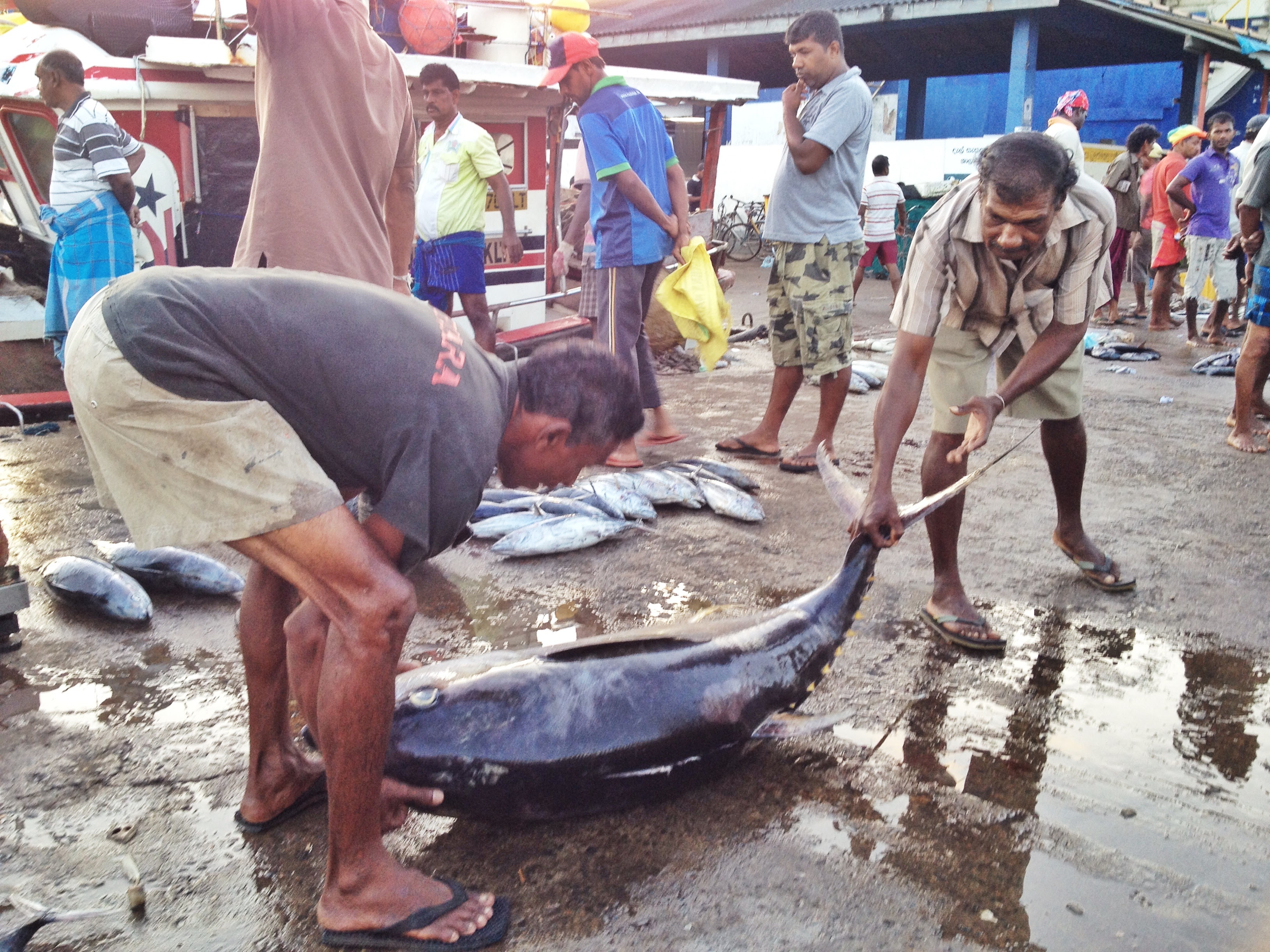 Too busy taking pictures I kept getting yelled at for almost stepping on piles of fish that were on the ground. There were fish everywhere. I had to step carefully around piles of fish.

Sometimes it’s a big pile, other times it’s a small pile of half a dozen fish. I’m not really sure how everything works – did the fishermen sell the fish directly or are these men hawking fish middlemen? 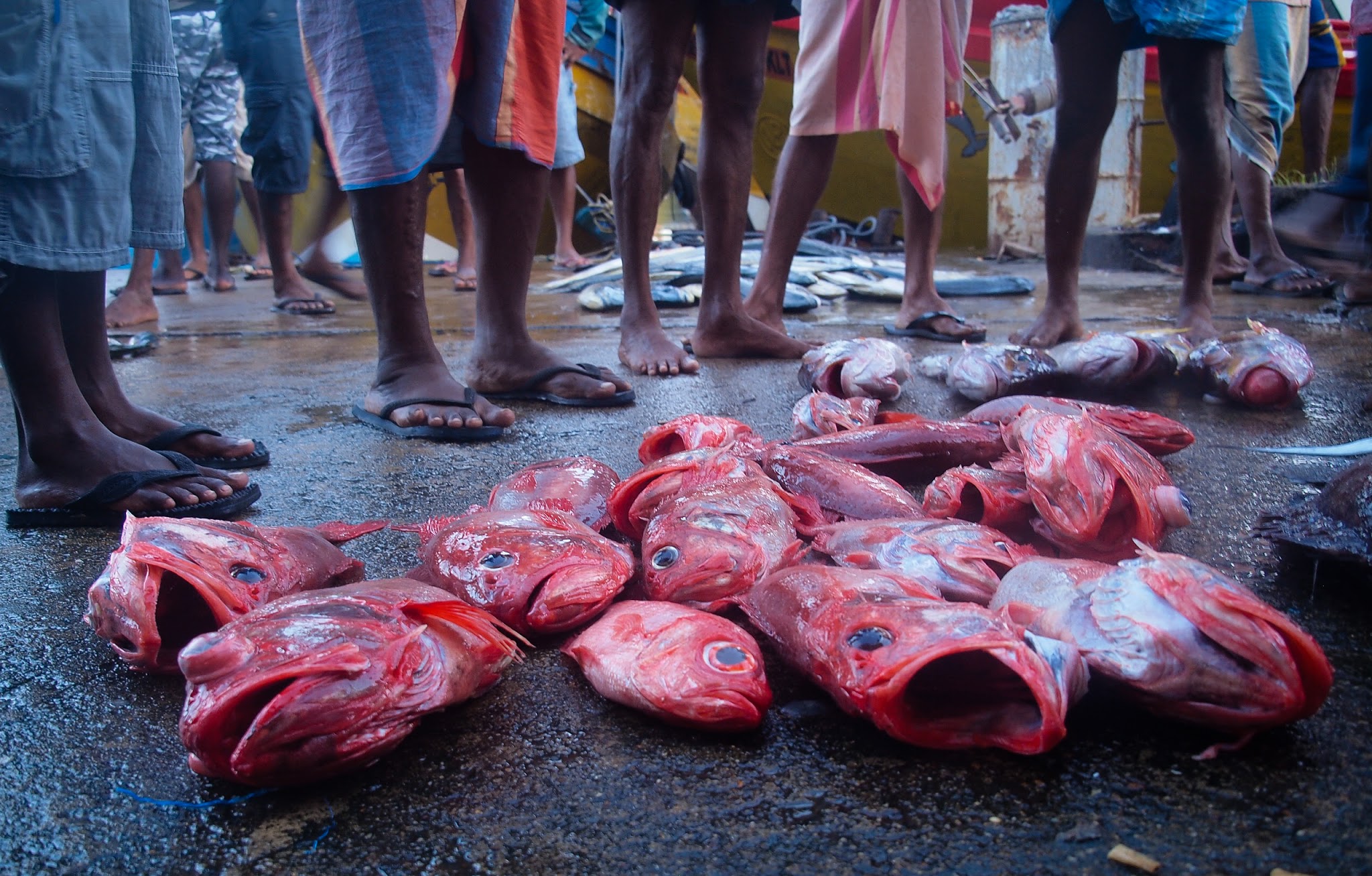 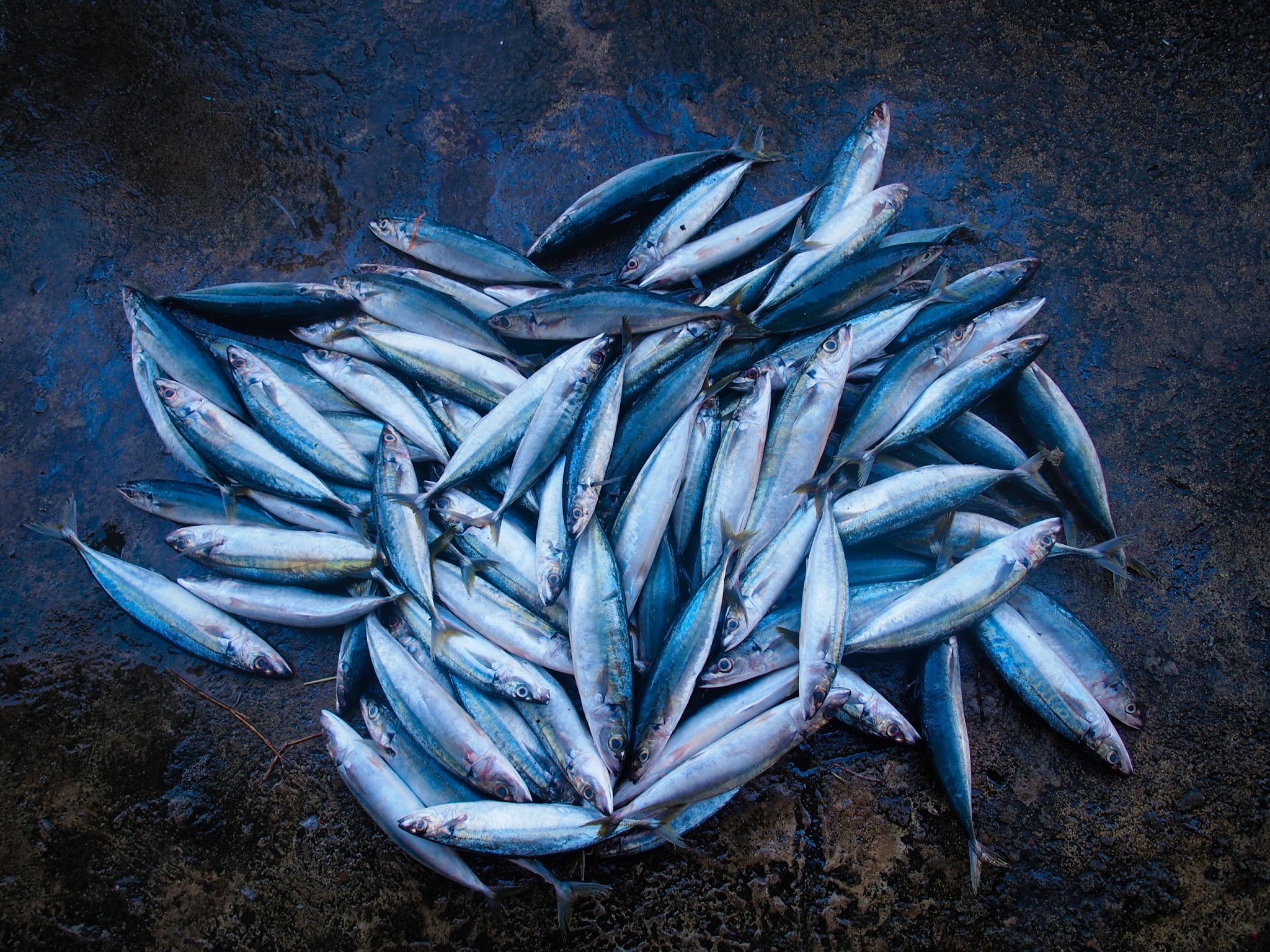 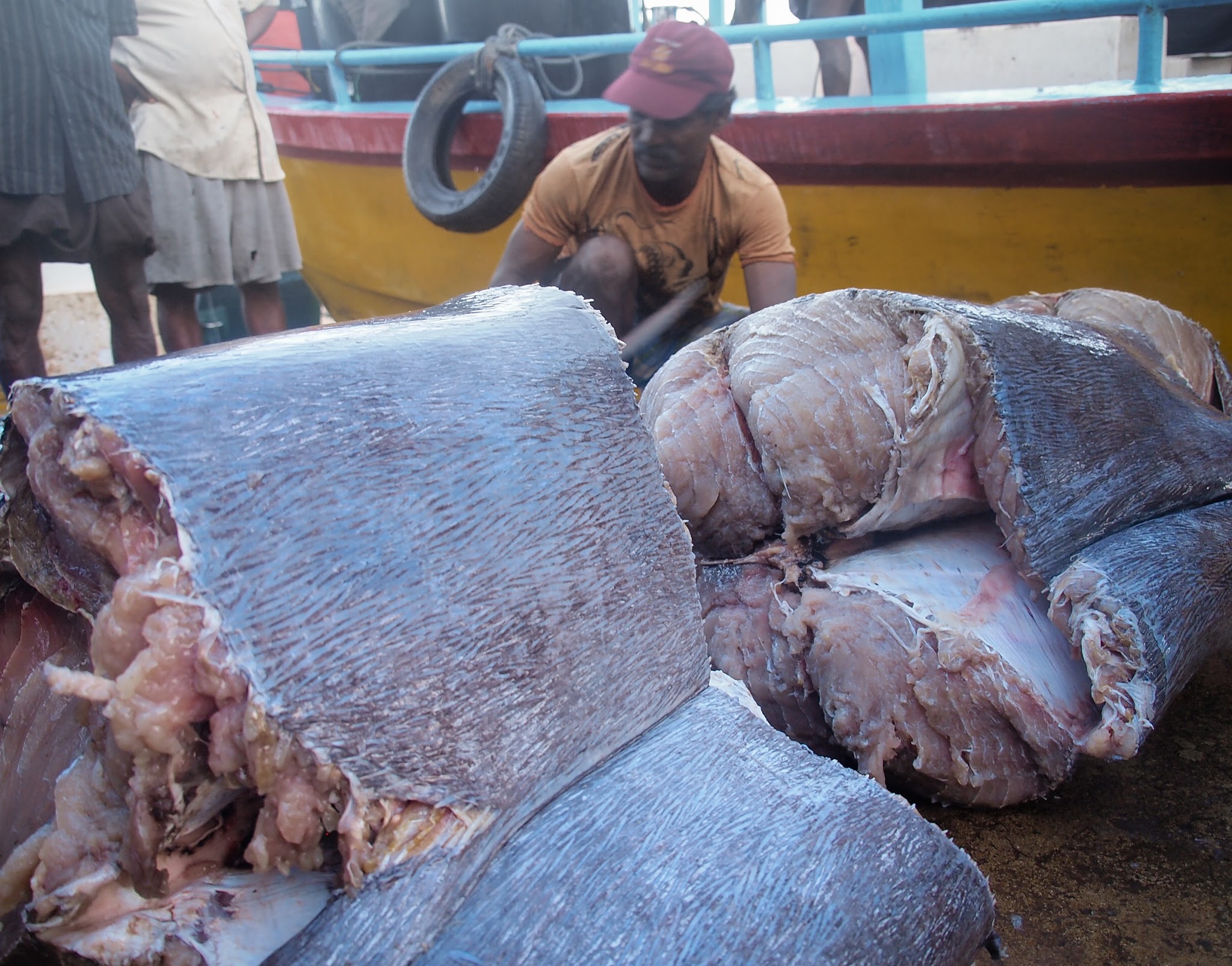 Not an optical illusion. It was a really big fish.

Once a purchase is made, you can the take your newly purchased fish to one of the butchers in the back who’ll clean and fillet your fish for you. Dogs and birds roam the area picking at scraps.
Colorful fishing boats and a mosque lit by the morning sun formed the perfect backdrop to the activity.

It was messy, fishy, and strangely scenic at the same time.

I noticed that curious stares turned into shy smiles and polite nods wherever I caught their eyes.

Someone caught my eyes and pointed to a building nearby ‘up’, he said. It took me a second to realise that he was showing me where I could climb up and get a better vantage point of the market. 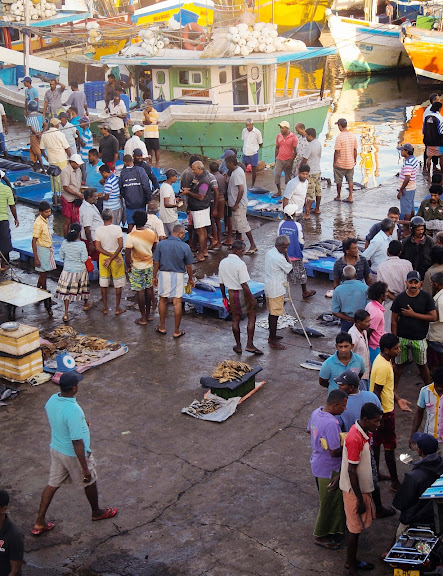 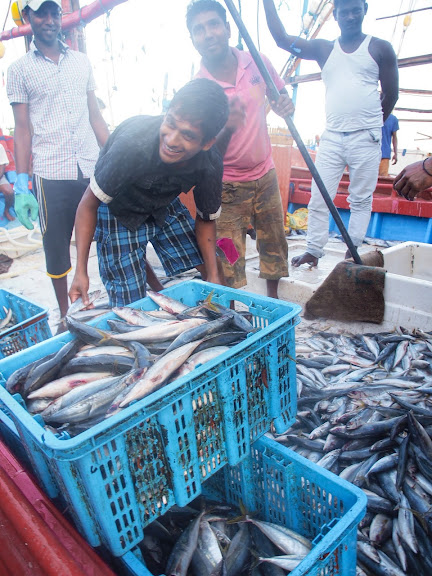 On my way down I got called over again. This time by a group of men repairing a fishing net. A few of them knew a bit of my native language (Indonesian) having worked with Indonesians in Saudi Arabia so we chatted amiably in my native language – they never stopped working. Their hands working too fast for me to see what they were doing. 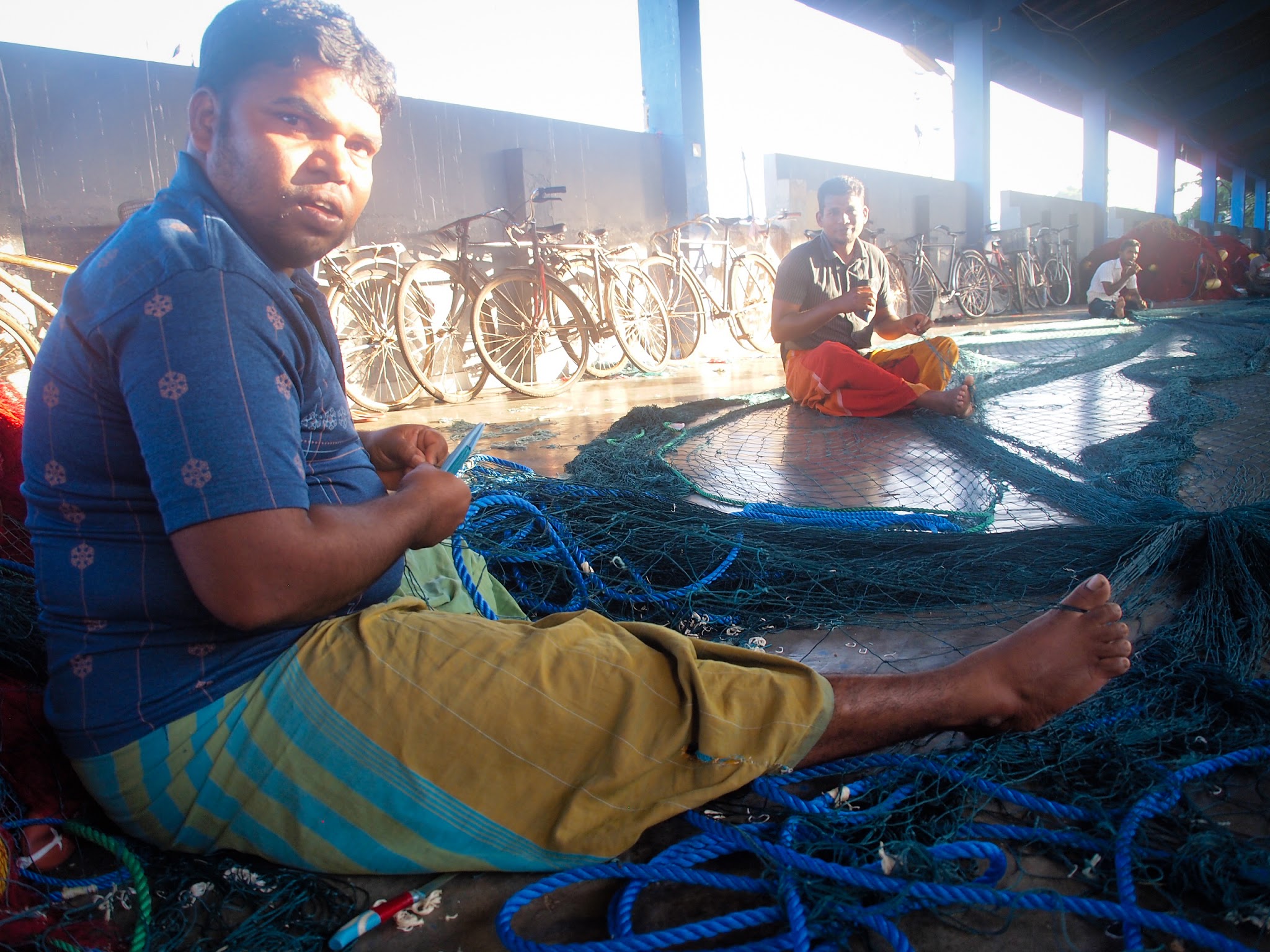 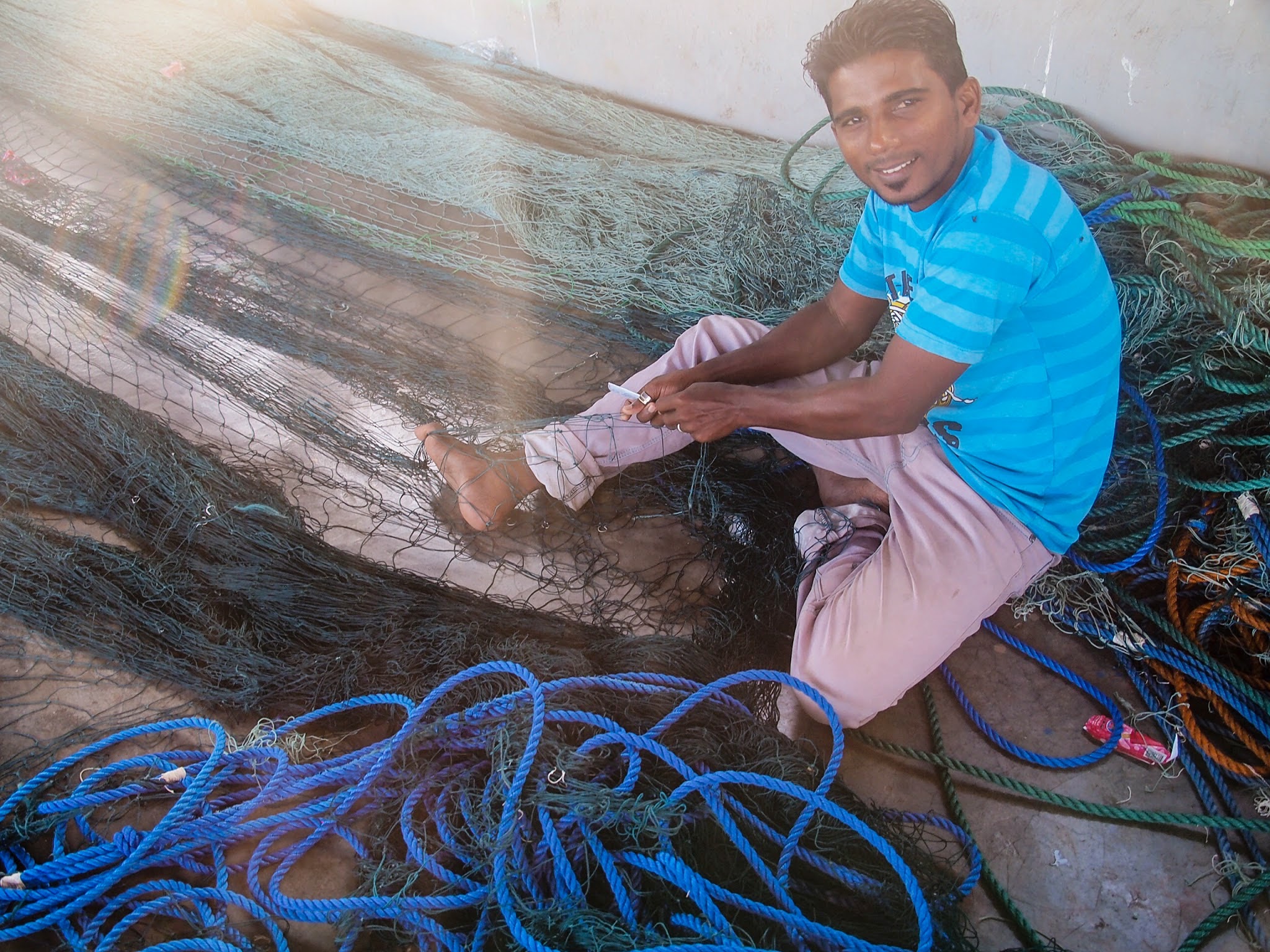 ‘Madame!’ – a man I’d never seen before ran towards me over and told me that my tuk tuk driver was looking for me. I stood out so much even in a crowded market, I was easily located. My allotted time is up. I left feeling exhilarated.

I always recommend people to check out the local markets when they’re traveling. To be honest it’s not always the colorful tapestries you see in magazines. Sometimes it’s a photographer’s heaven, other times it’s just ‘meh’ if not downright dangerous.

Beruwala fish market is an example where it’s particular rewarding. I loved this kind of stuff. It had everything I looked for in a travel experience – a sensory overload of colors, smell, and humanity with a scenic background.

Moments such as what transpired at the Beruwala fish market was the reason Sri Lanka quickly became my favorite SE Asia destination. For a comprehensive guide to visiting Sri Lanka, see this guide.

—
Do you visit the local marketplaces during your travel? Which country has the most colorful markets?

How to get to Beruwala Fish Harbor

Once in Beruwala, take a tuk tuk to the Harbor. A ‘there and back’ tuk tuk to ride the 3km from Cinnamon Bey to the harbor, plus an hour waiting time, was 300 rupees. Tip: Wear close-toed shoes when visiting. My poor roommate had to endure my fishy sandals and feet for days!

I was a guest of PTBA and Cinnamon Hotels during my stay in Beruwala. 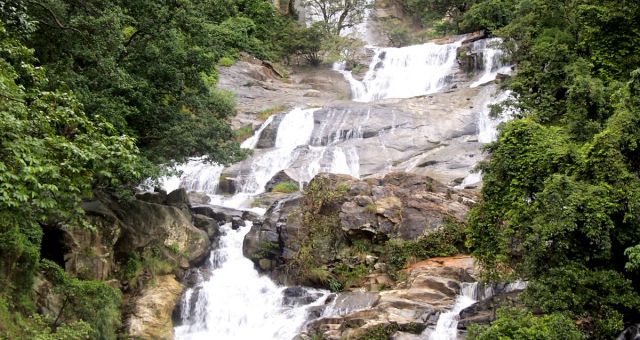 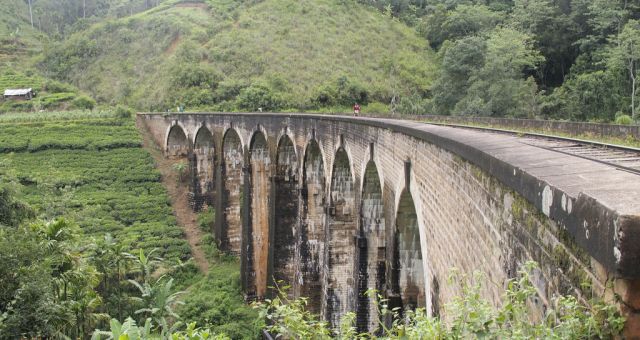 The Do’s and Don’ts of Traveling Sri Lanka