“If you go to Ethiopia, you’ve got to see the rock churches in Lalibela! It should be one of the new 7 Wonders of the World!” claimed a fellow traveler enthusiastically. He’s not the only one spewing superlatives about these churches in the Northern Circuit of Ethiopia.

I came to Lalibela prepared to be wowed by their rock-hewn, underground churches. Instead, after 2 days, I left feeling underwhelmed. And terribly guilty. Guilty because I felt like I should be wowed. Yet, I didn’t. But I should.

There are about 11 churches in the Lalibela complex, all of them are carved out the underlying bedrock of the town. Some are completely detached from the surrounding rocks, while others are only half-way there. 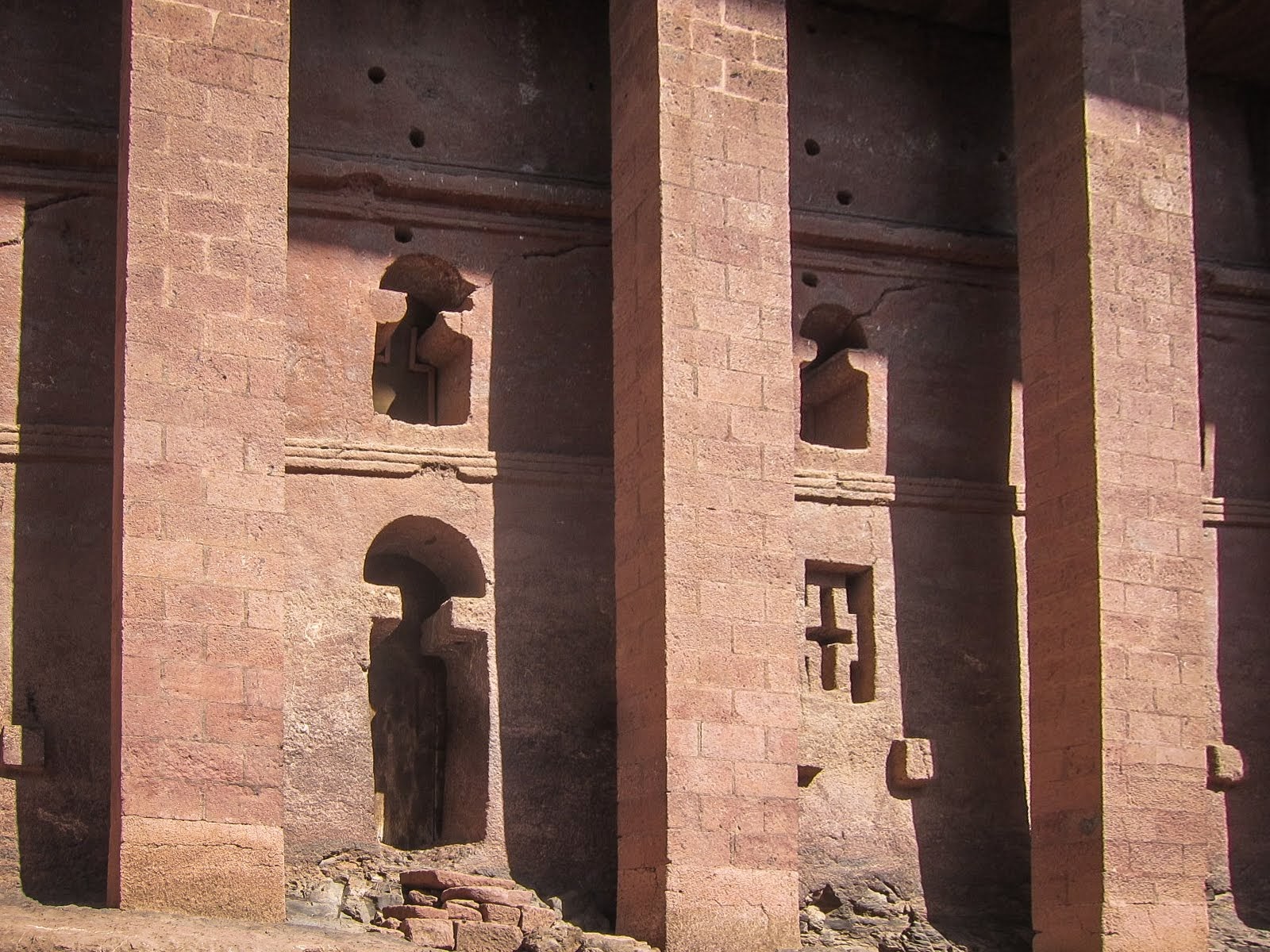 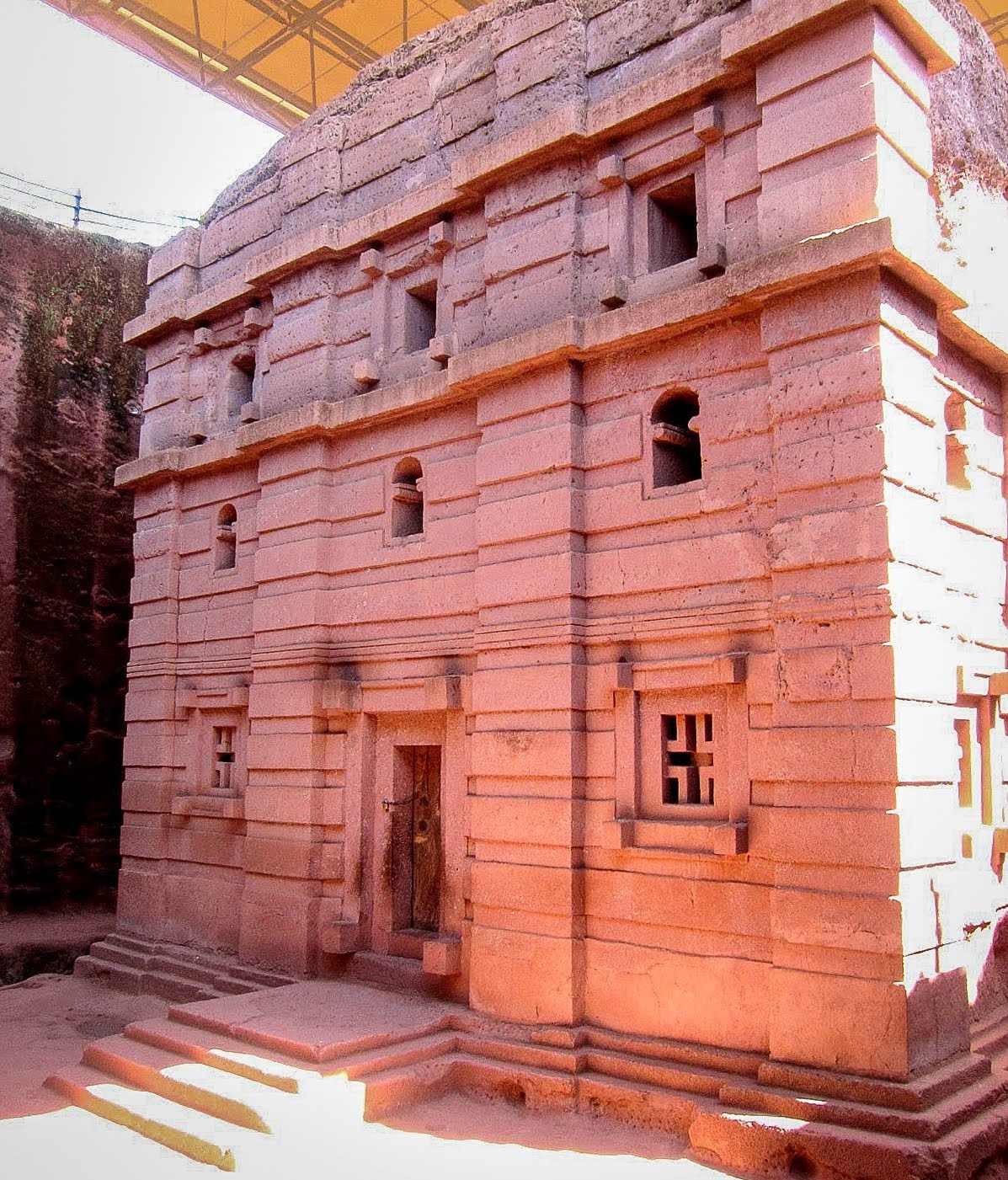 One of the rock churches of Lalibela

The size and the attention of the details hint at the massive effort undertaken to build these churches. Think of the room you’re in reading this post and imagine that at one time, it was filled with rock. Someone then diligently carved away the space that becomes the room, carved the doorway through which you entered, and even the room it’s connected with.

Working with negative space, they carved these buildings out of rock following whatever divine instruction they got. They should’ve taken my breath away. But instead my first reaction when I saw them was, ‘This is it?’ 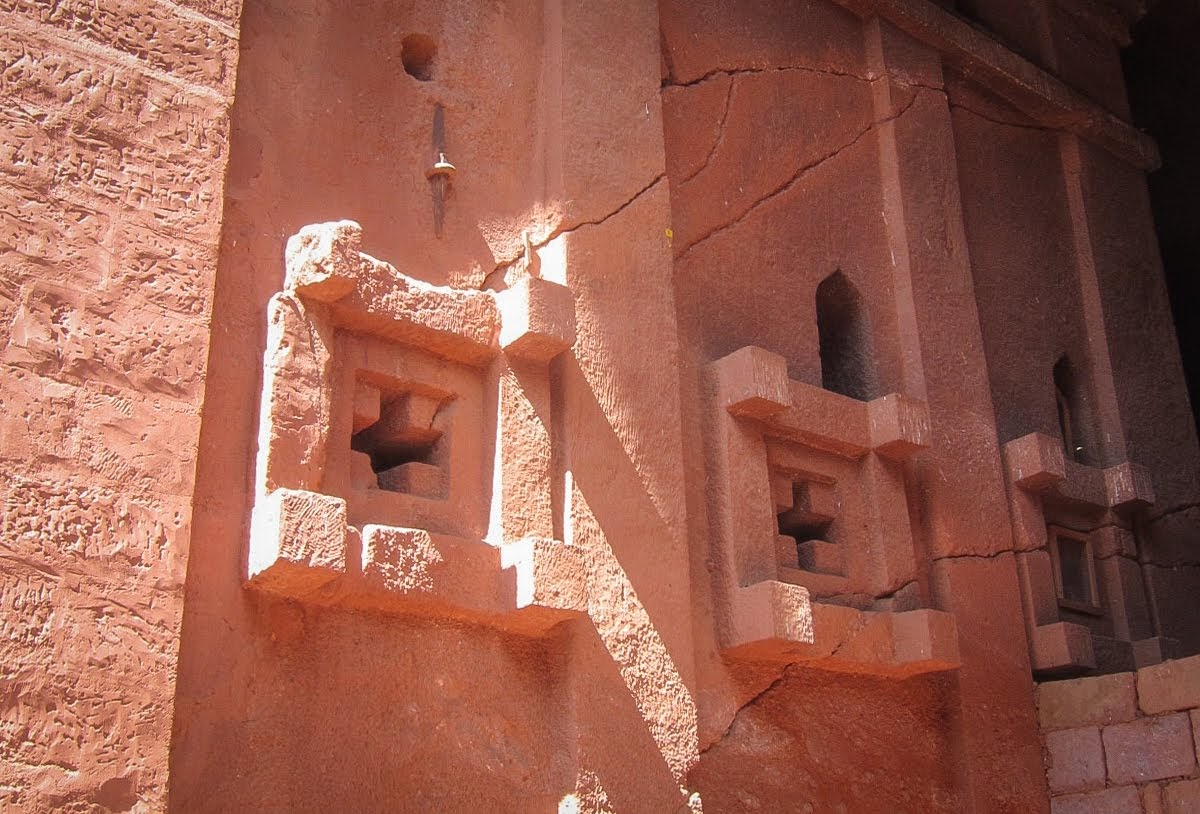 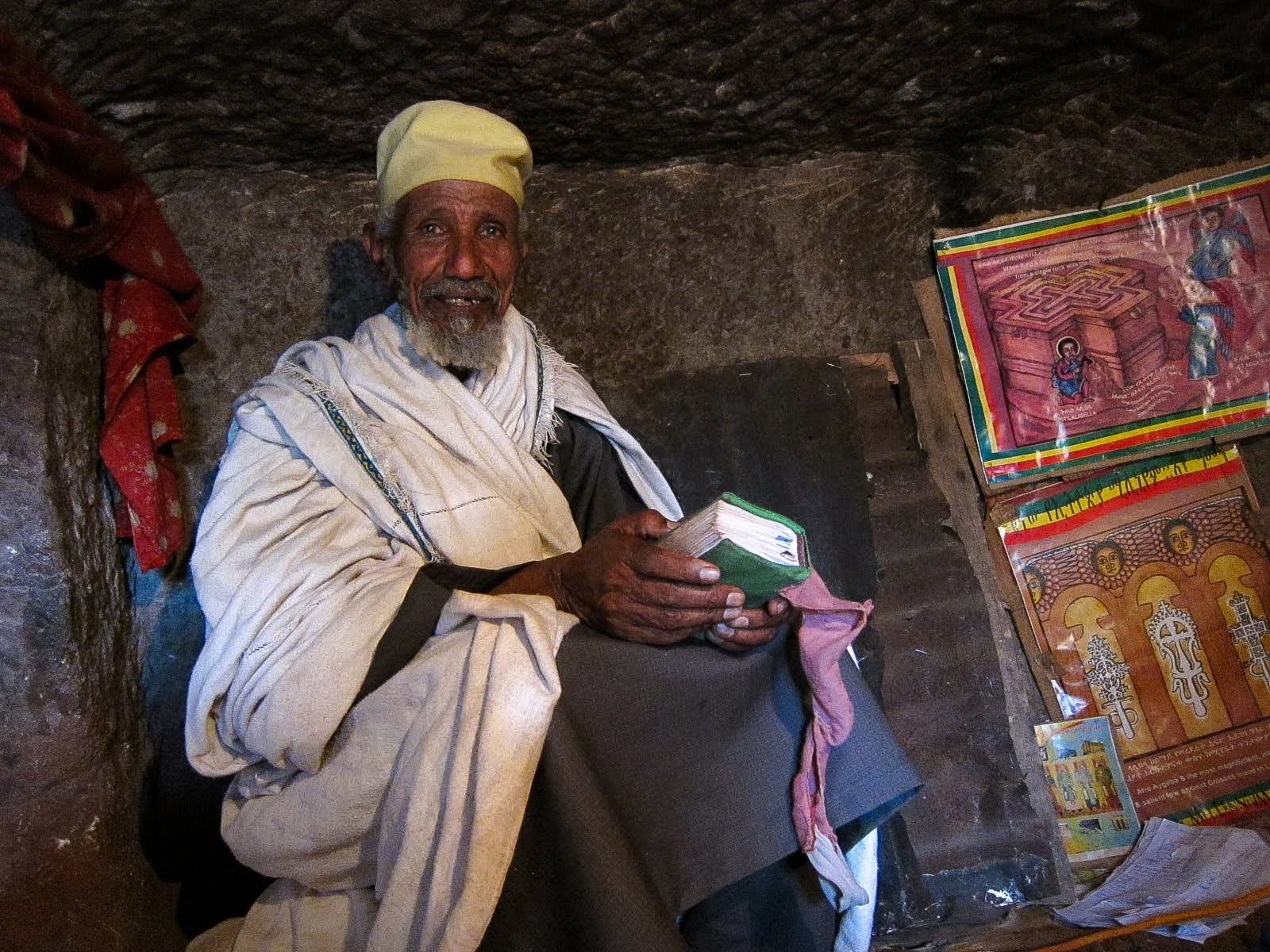 An Ethiopian priest inside a Lalibela rock church

Details of some of the rock carvings

Each Lalibela church is probably the size of a chapel. Compared to European churches, the churches of Lalibela are simply decorated. No gilds, minimum paints, minimum carvings. Instead, its beauty came from geometric shapes that are carved on their exterior walls and into windows. The church’s interior is dimly lit making it even harder to make out the painting and the carvings on the ceilings and walls. Don’t get me wrong, considering how these structures were created, they’re very impressive. It was the fact I had to keep reminding myself. I guess I was expecting more. More of what? I wasn’t sure myself.

The priests guarding the church looked grumpy and tired, I’m guessing for being repeatedly asked for photographs. 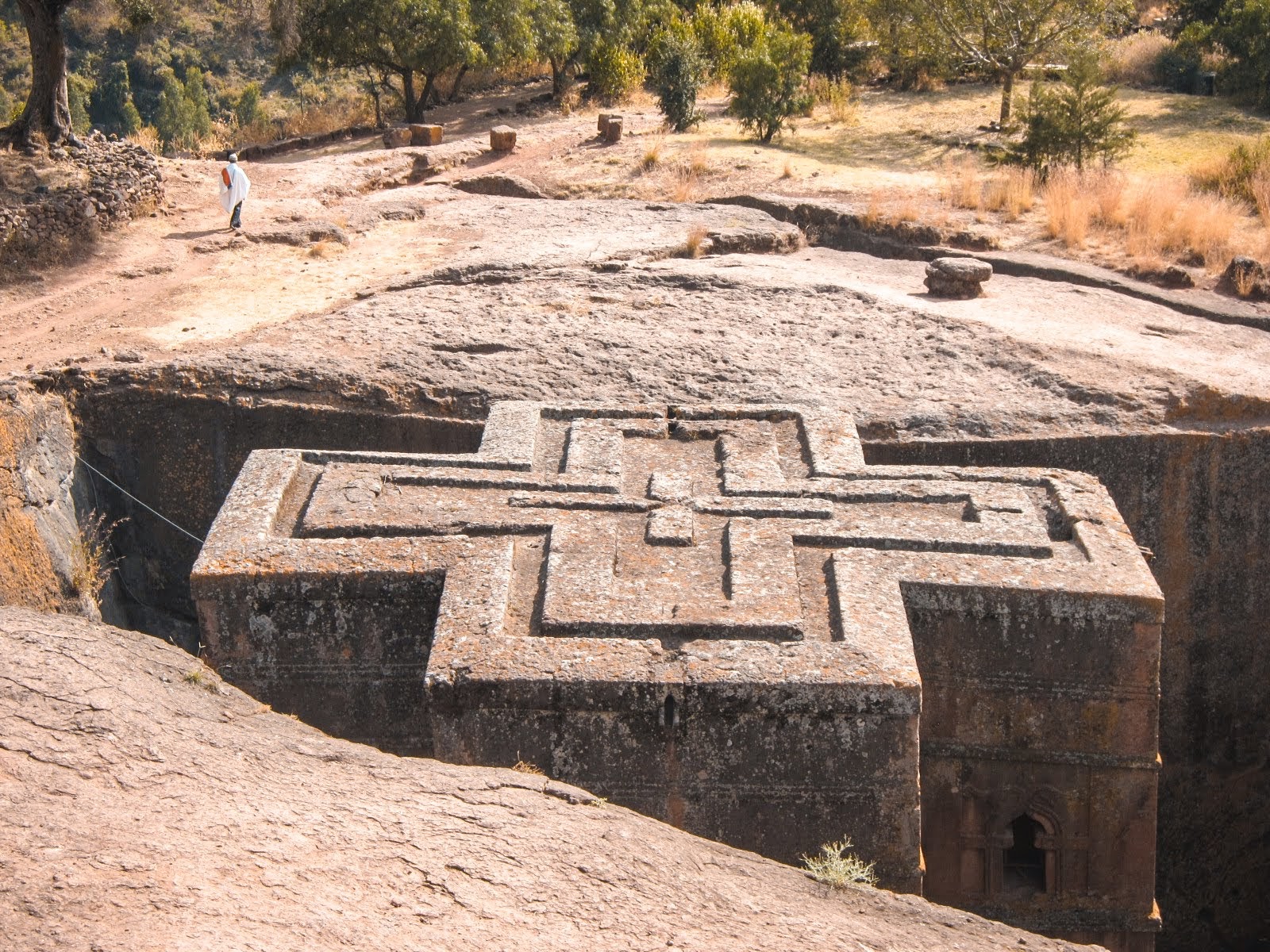 St. George church from the top

The most redeeming thing about these Lalibela churches was Saint George, which was the most impressive one of them all. It was definitely the most photogenic with its profile of a cross. I wish I could’ve explored the striking structure in peace. However, my guide continued on chattering in incomprehensible English, about the church but mainly about the tea party he insisted I should come to.

“This is the last church we’re visiting. After this, we can take a break and have tea with my friends. Yes?”

“You know what? I’m going to pay you now. I want to stay and take pictures.”

He tried again, “There’ll be a dance performance** too!”

“Still, the answer is ‘no'” – I gave him a little wave. Finally, sweet relief!

—
Lalibela itself is a little bit depressing. Its streets are littered with scraggly kids and too many people hanging around on the street not doing much at all other than trying to strike up conversations with tourists. It seems that the 350 Birr ($20) entrance fee to the churches doesn’t really trickle down to the villagers themselves.

“Hello, money” – kids would approach with their palms up while flashing white, toothy grins. Some would make writing motions to indicate that they’d like you to give them a pen, or a notebook, or something, anything. 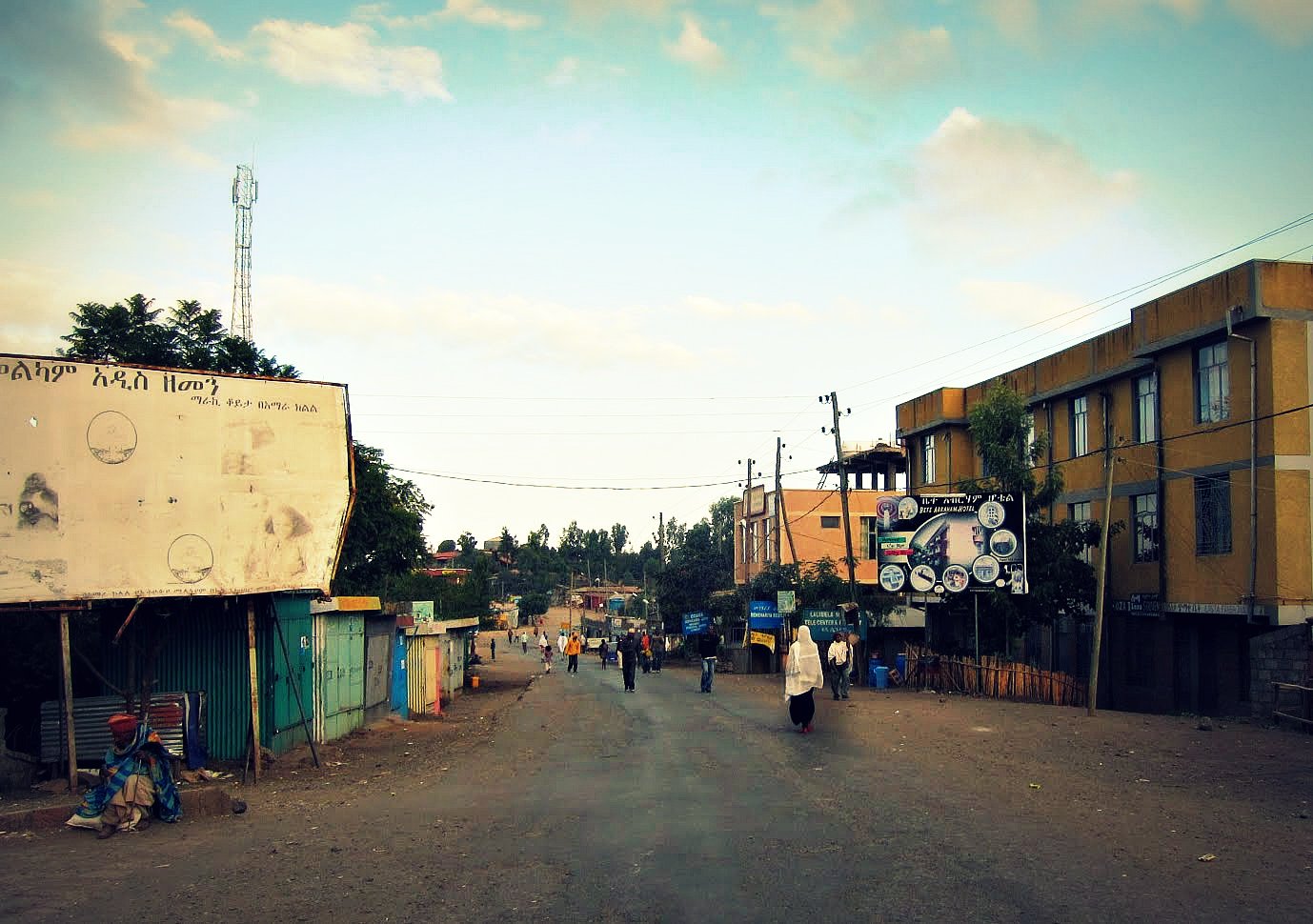 One of the main streets of Lalibela

I never felt threatened by these uncalled for attention. Just annoyed for not being able to walk alone in peace. Some days I could take it in strides, on others the constant noise gets me down. That day in Lalibela was one of the latters.

I’m pretty sure I heaved an audible sigh of relief when I finally boarded the plane to Gonder.

I was warned about Gonder. The castle was just ‘eh’ and the hassle one gets is one of the worst in Ethiopia’s Northern Circuit. ‘Skippable’ – a fellow traveler told me. Of course I heard all of these after I booked my flight, so I had little choice but to go.

I met a nice Aussie couple who offered me a ride from the airport in their hotel van saving me 70 ETB. I got dropped off at the piazza where I knew a bunch of budget hotels were located. As soon as I stepped off the minivan, one of the touts (they wear green sweater with yellow stripe) honed in on me.

‘Hotel, mam? Where you go?’ During my time in Ethiopia, I started to really dislike these guys. They run ahead into your hotel to try to get a commission. But more annoyingly, they just won’t shut up and it makes it hard to think.

I had a hotel in mind and on the way there two of them were following me. I saw a fancy hotel with a security guy in front of the gate I quickly turned into and walked inside. As I had hoped, the guys didn’t follow me in there.

To the front counter people, ‘I just want to hide. Is that ok?’ They were being very friendly about it. I wanted to stay there but it was outside my budget. 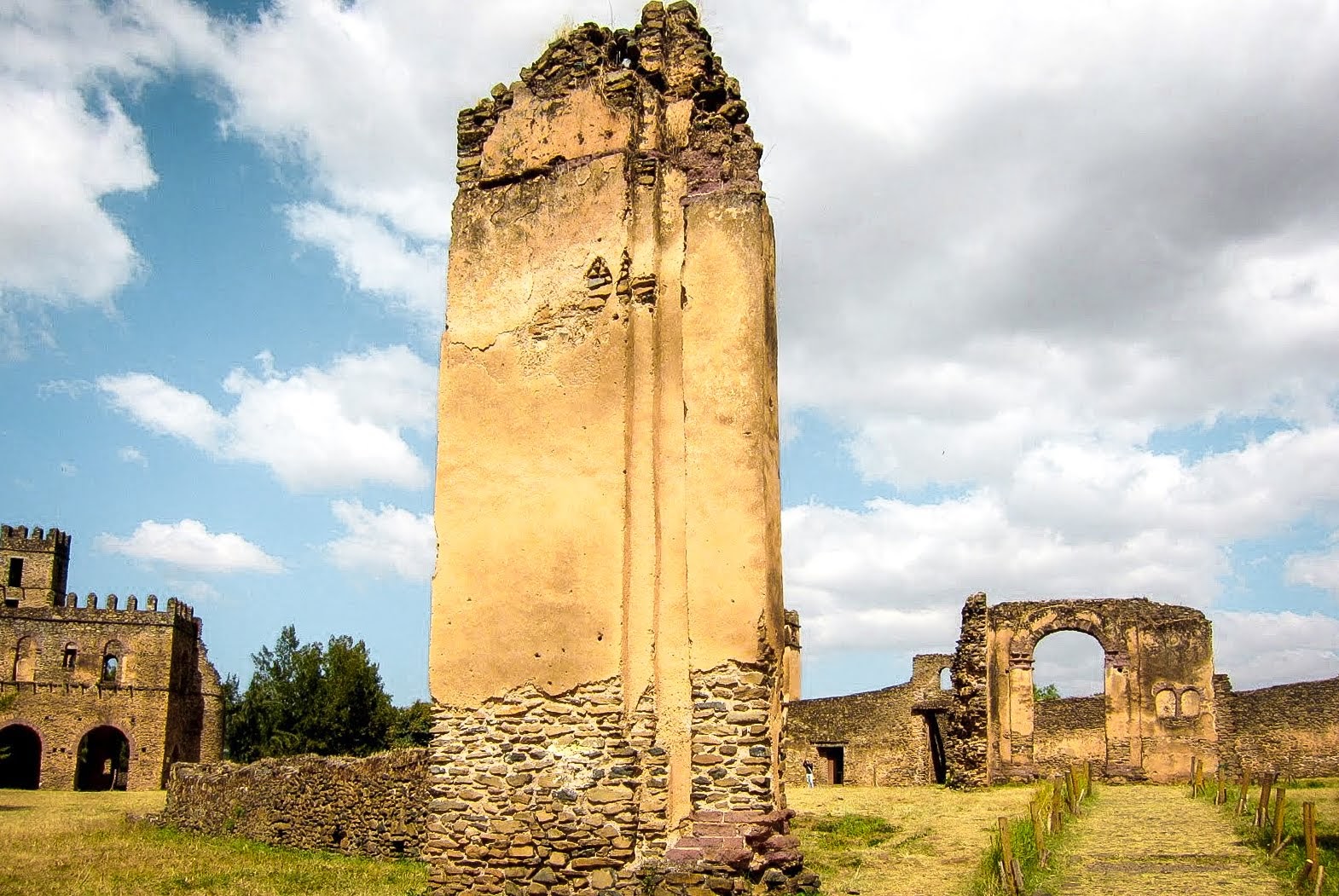 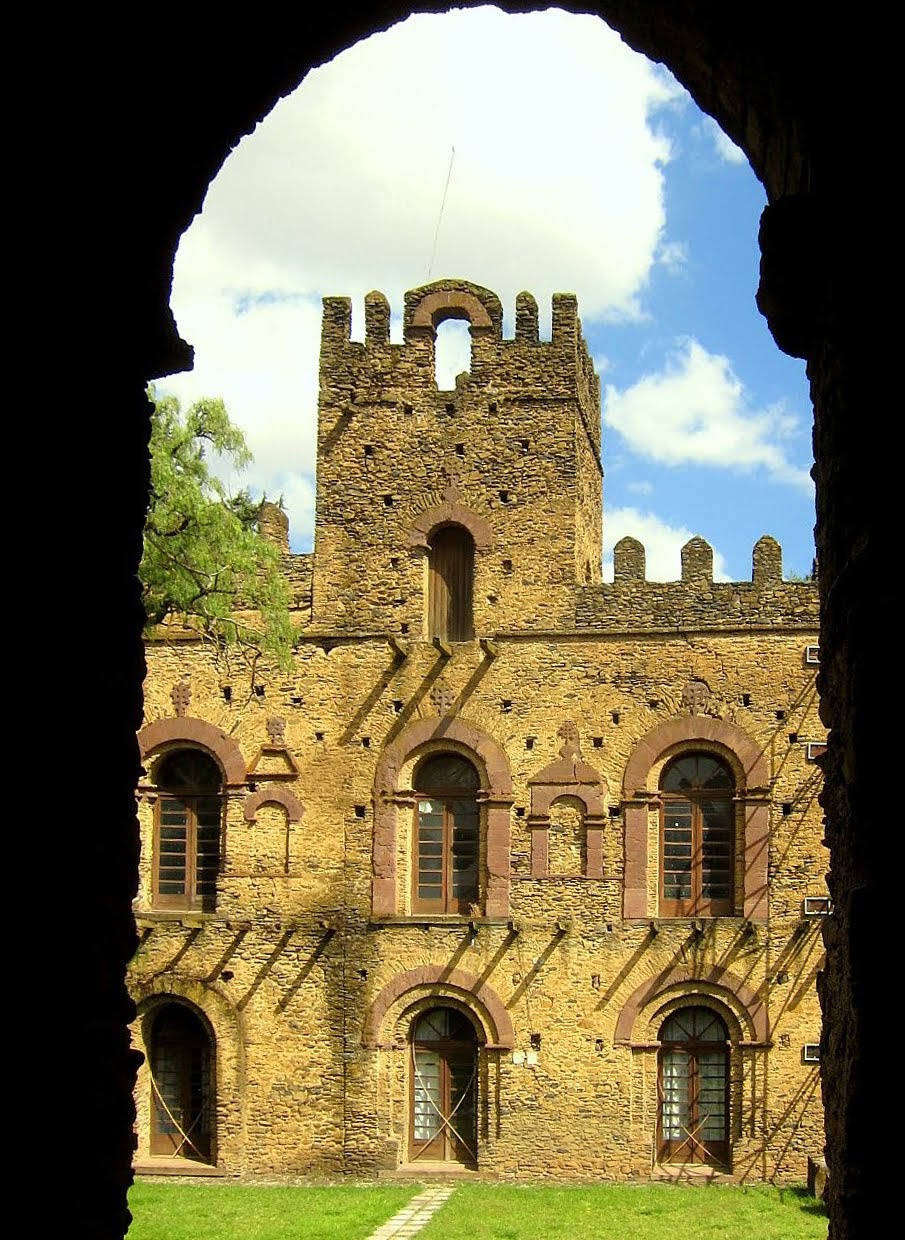 But other than that, the 17th century Gonder Castle turned out to be a pleasant surprise. I’ve seen better castles elsewhere, but the ground has peaceful atmosphere: the sky was blue, there was a cool breeze, and the ground was covered in lush green. The best thing of all? Nobody bothered me there. I walked in complete freedom, exploring the ruins using only my guidebook for explanations. It was lovely! 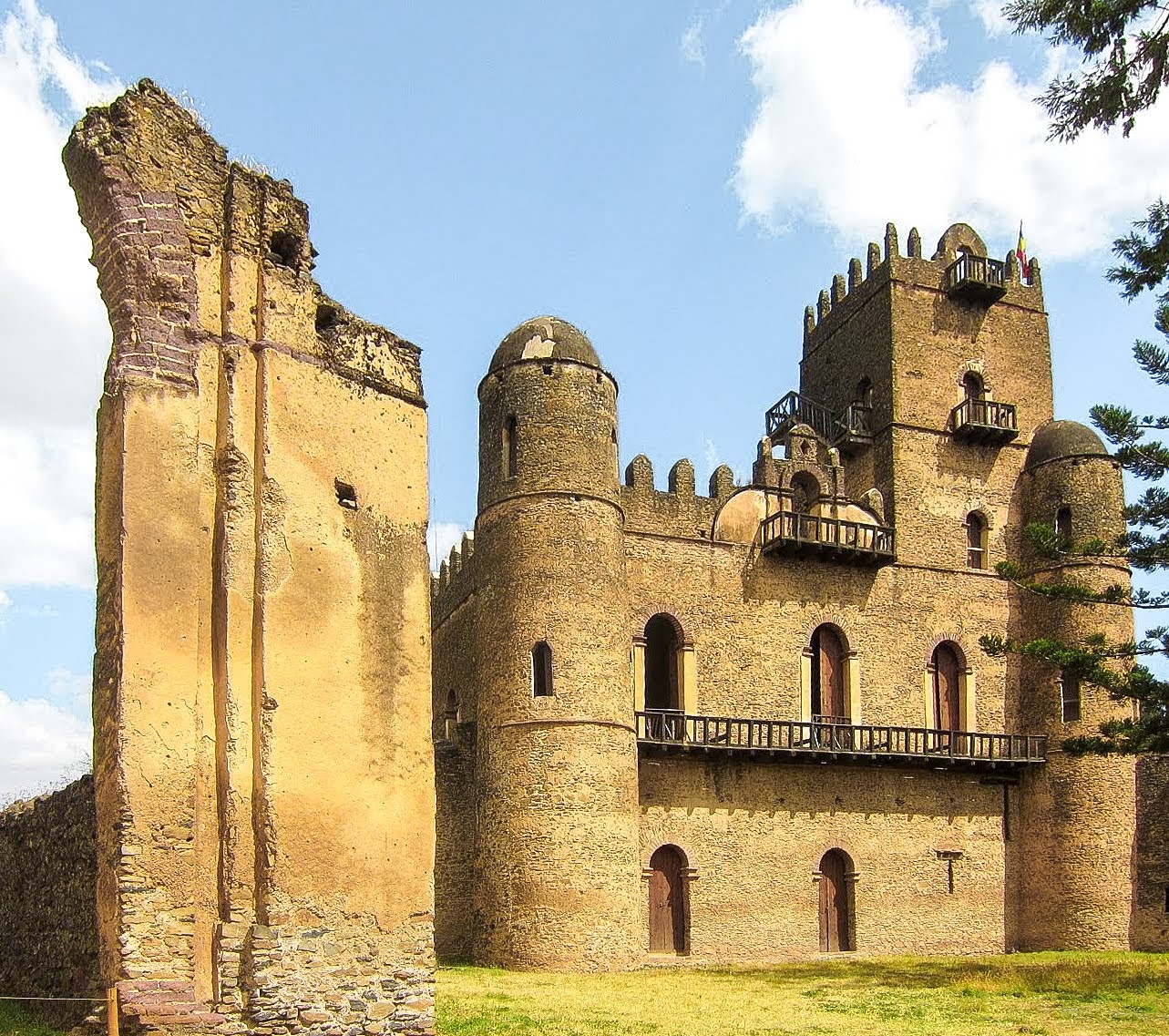 The 100 Birr entrance fee to Gonder Castle also included the entrance to Fasilides bath – a 10 min ride away in a tuk-tuk.

There isn’t much to the bath itself, especially since there’s no water in the so-called bath (it’s only filled once a year during Timkat). 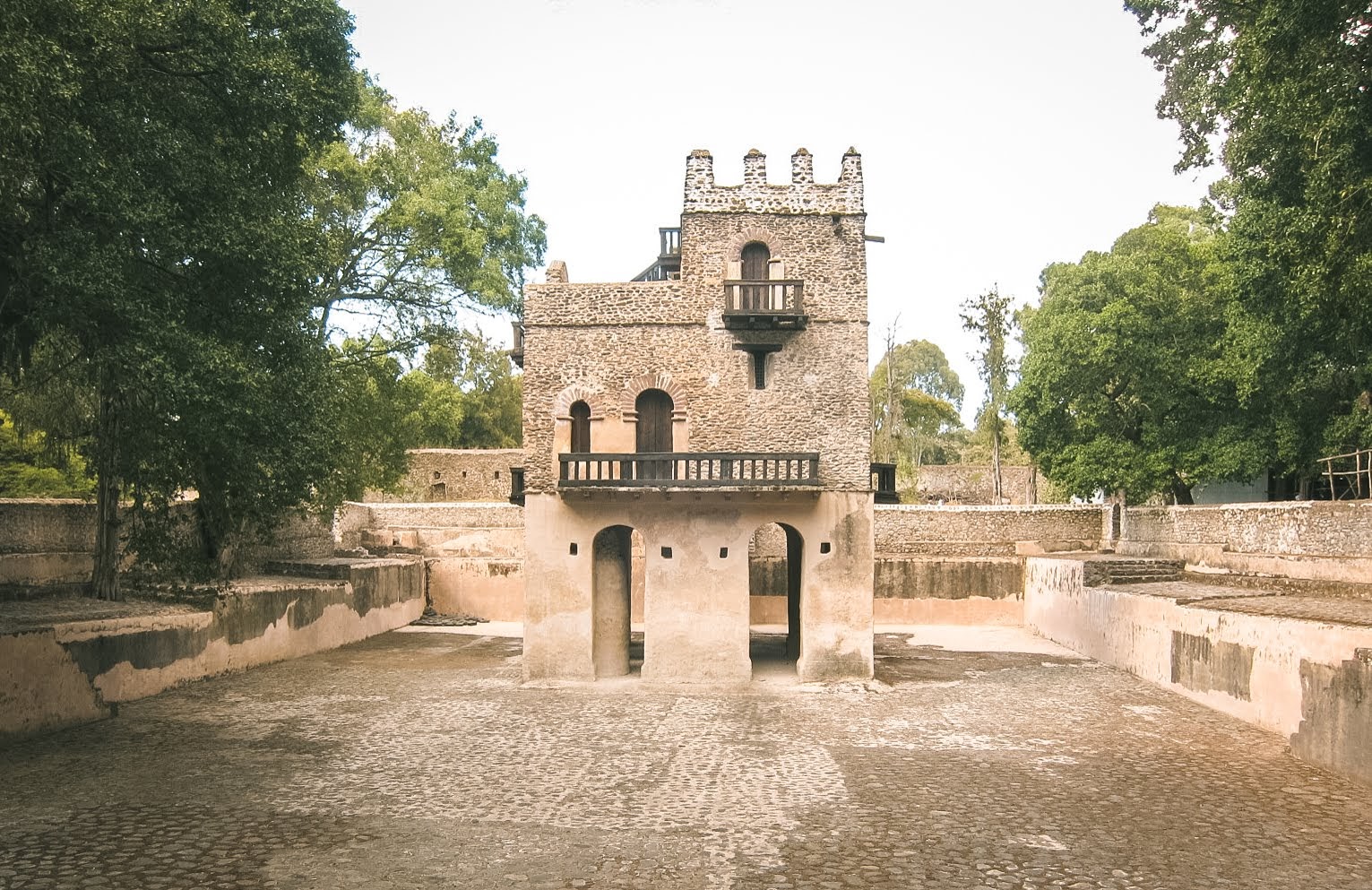 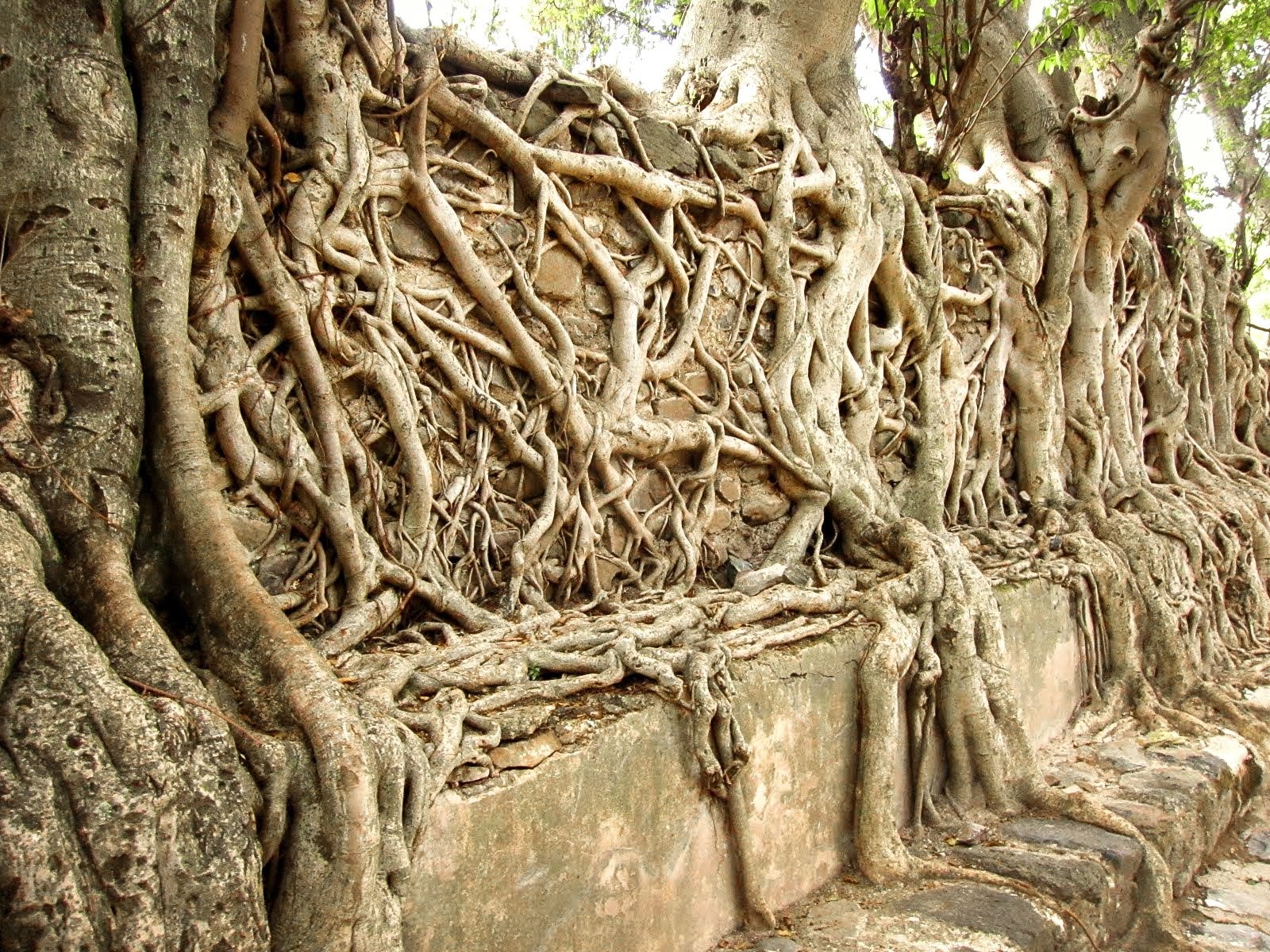 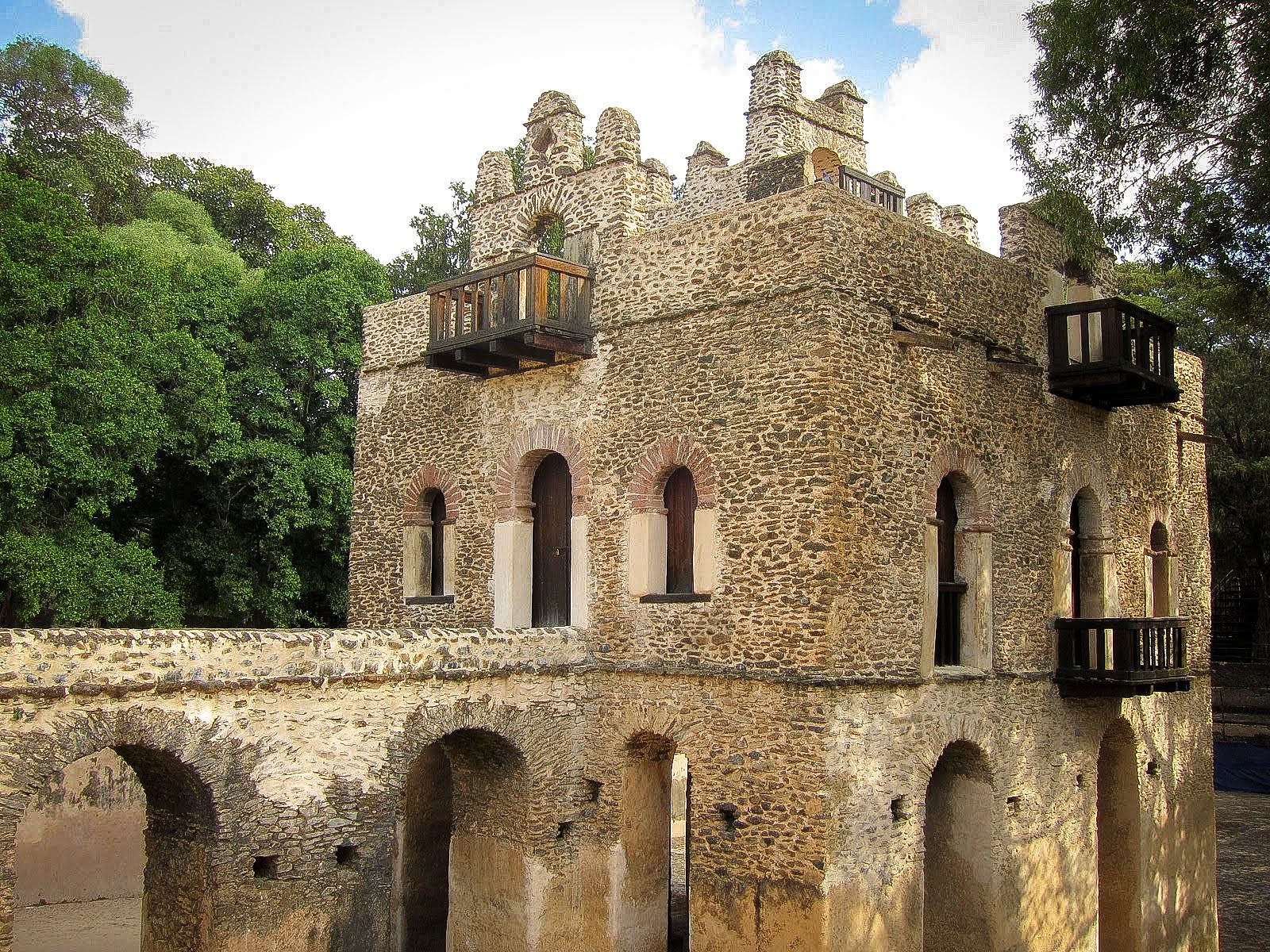 The bath is in the middle of a large lawn, surrounded with trees that were hiding hundreds of noisy, chattering birds. They were completely out of sight but I could hear them. I found it soothing. There was nobody else there and I had the place for myself.

I laid my cheek on the warm stone enclosure, closed my eyes and for the first time after I arrived in Ethiopia I felt peaceful. Just me, this empty pool, the trees, and the birds. I felt that I had been holding my breath all this time and I could finally exhale. It was a great relief. It was so peaceful I could’ve stayed for hours.

Another tourist entered. He took about half a dozen pictures and left. His whole visit took less than 5 minutes.

As I left, I wondered if that person was sitting in a cafe somewhere telling others that there’s nothing to see in Gonder.

Of course your own experience might be different. You might absolutely love Lalibela and find Gonder ‘skippable’. That’s the beauty of travel. There’s nothing cookie cutter about the experience.

I flew into Lalibela from Addis. Then I flew from Lalibela to Gonder. I found that domestic flights in Ethiopia are reasonable priced, especially considering the alternatives: days-long bus ride.

2017 Update: The entrance price to Lalibela rock churches is now 50 USD. I sure hope that some of the money goes towards the community 🙁 – Entrance price to Gonder Castle is 200 Birr.

*Should you hire a guide in Lalibela or not?
If you get yourself a good guide, I’ve heard it’s worth it. But since these guides work on rotational basis, it’s a crap shoot. You might end up with mine if you’re unlucky. On the other hand, having a guide is useful for showing where these churches are. Since they’re underground, they’re not easy to spot and some churches are connected through tunnels.

**The Ethiopian Siren Scam
In Lalibela, every local you meet will eventually ask you to go for a ‘party’ or ‘traditional dance performance’. If you go, make sure you ask how much everything is before consuming any tea, or ‘tej’ or anything – it might turn out to be one of those ‘siren scams’ where they hand you an exorbitant bill at the very end.

Where to stay in Lalibela:
Red Rock Lalibela Hotel, rooms start at $30. 5 minute walk to the rock churches.

Where to stay in Gonder:
Gondar Backpackers, a good budget value in Gonder. Cheap tuk-tuk ride to attractions. 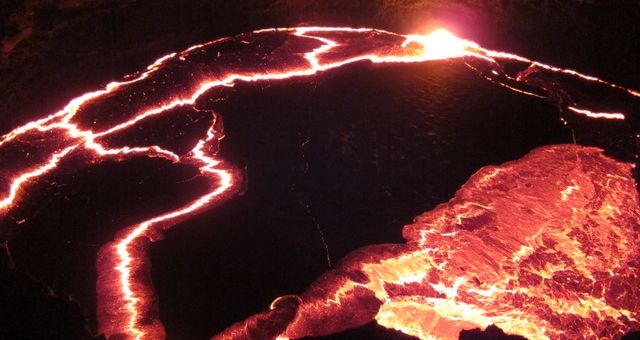