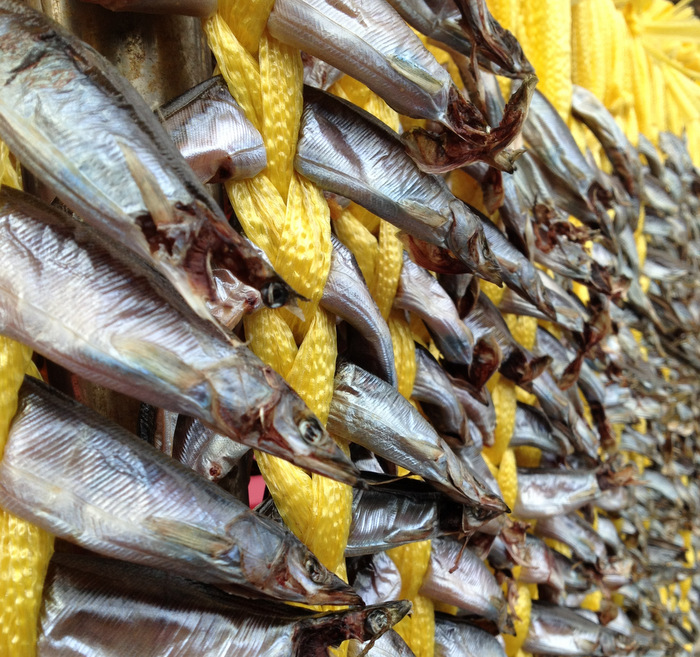 I just read a post about cities in Korea having an identity problem: in that they tend to look the same. Sokcho’s main drag suffers the same problem. This street below can belong to any city in Korea. 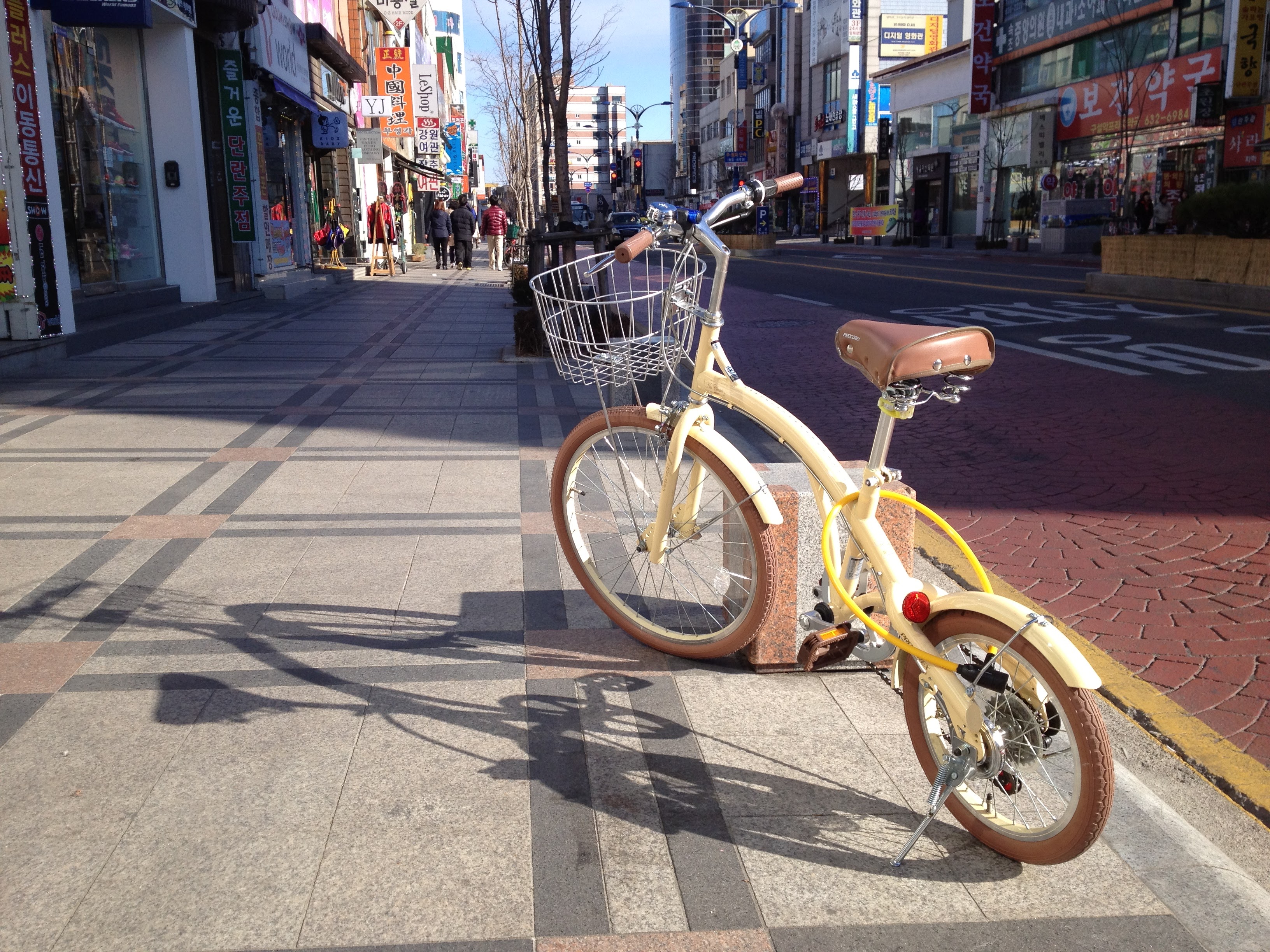 Wandering down the main shopping area after a particularly hard hike in nearby Seoraksan National Park, I took a turn towards the water.

Here by the waterfront the sights are a little different.

Sokcho is still mainly a fishing village. In case you can’t figure it out from the slightly fishy smell in the air, there’s this fishy statue in the center of town. 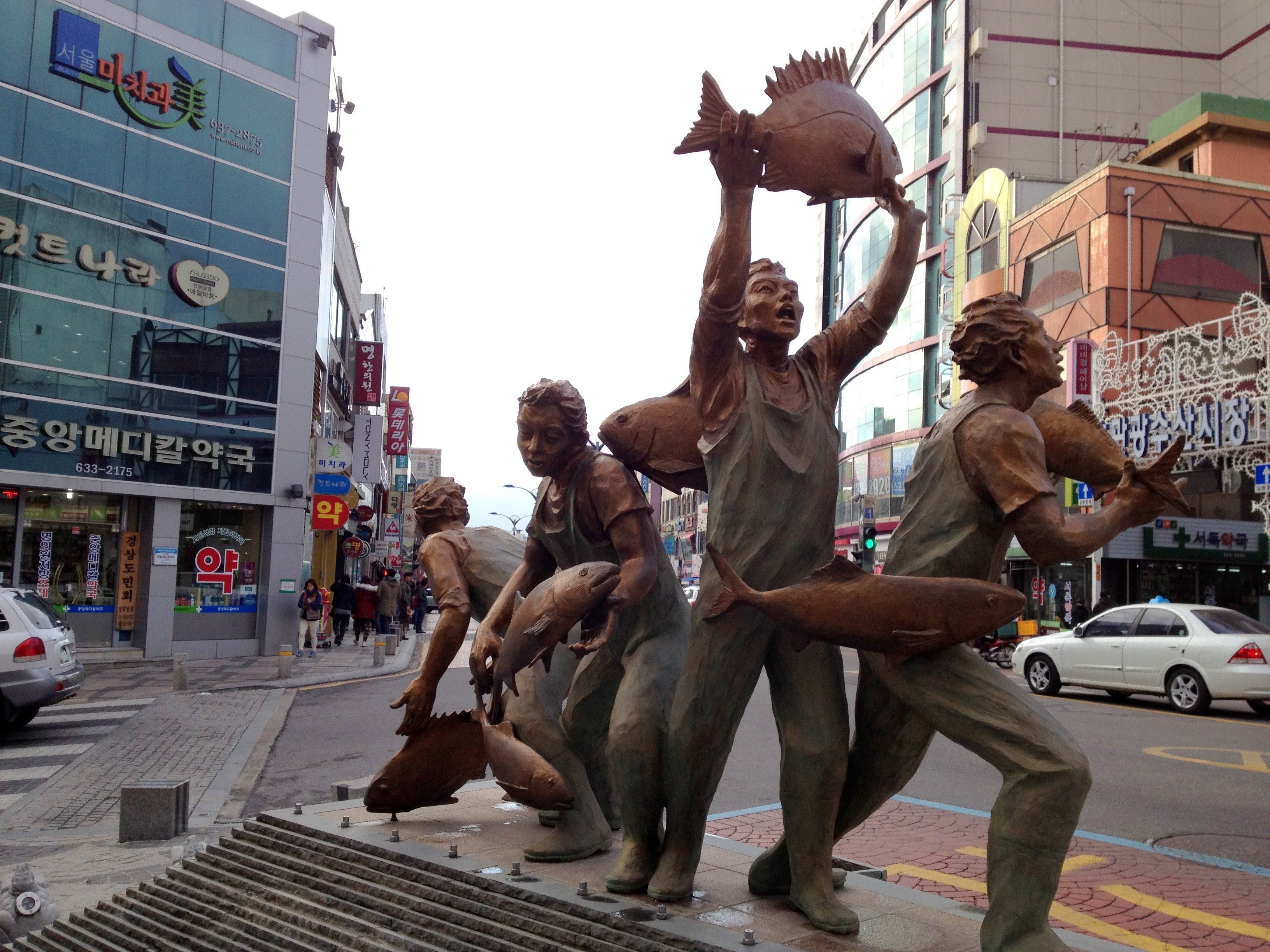 Fisherman status in the center of Sokcho, Korea

Down this street by the water, seafood restaurants line the street. I got dragged into one of these restaurants. Quite literally. I took a second too long to decide, the next thing you know my shoes are off and I’m sitting cross legged next to a low table and they’re putting fish on the grill. 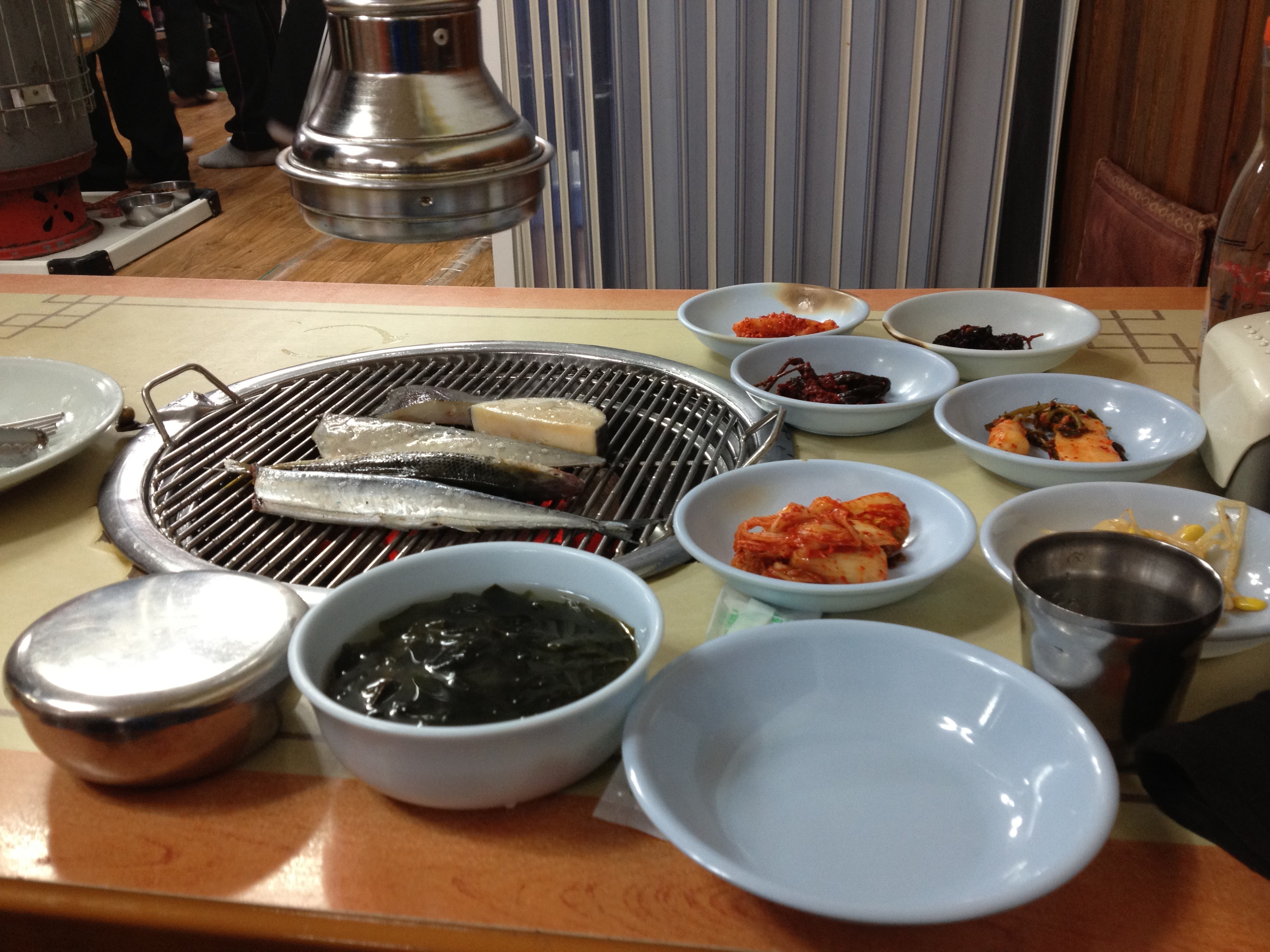 In most other countries, I’d have freaked out and demanded to see a menu, or a price list, for fear to be presented with an exorbitant bill in the end. But I’ve been in Korea for a while now and my sense was telling me that even though the whole thing seems fishy (haha, get it?), I had nothing to worry about. 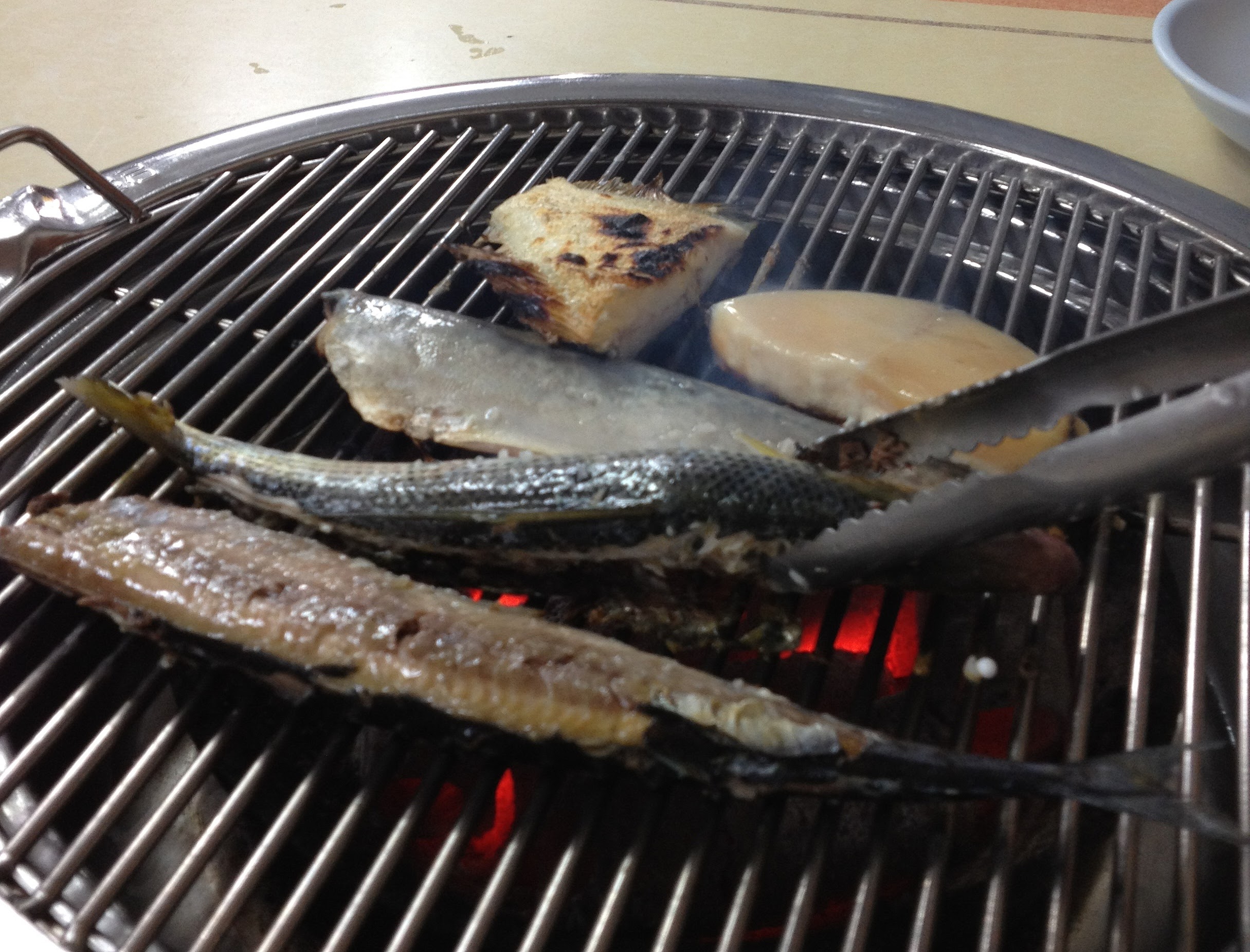 See the bit of fish that looks a bit like cheese? It was only the best fish ever. It melted in my mouth. Later on I learned that it was Patagonian Toothfish, commonly known by its more marketable name, Chilean Sea Bass – high on the Monterey Bay Aquarium’s list of seafood to avoid due to an abundance of illegal fishing that has depleted its stock in the wild. Not to mention that the method used to catch these fish drown thousands of birds every year.

I try to be really careful about the seafood that I eat, so I felt a little guilty. But at the same time, I’m glad I learned what a Chilean Sea Bass tastes like. If I had known what it was, I wouldn’t have eaten it and then I wouldn’t have understood why it’s so overfished. (Or the meaning of oral euphoria).

There were many aquariums outside these restaurants containing fish waiting to be served to diners. I tried not to stare as a woman scooped up a dozen wriggling squids or so and headed to the kitchen. They were most likely destined to end up as ‘ojingo-sundae’ or stuffed squid, Sokcho’s local delicacy. 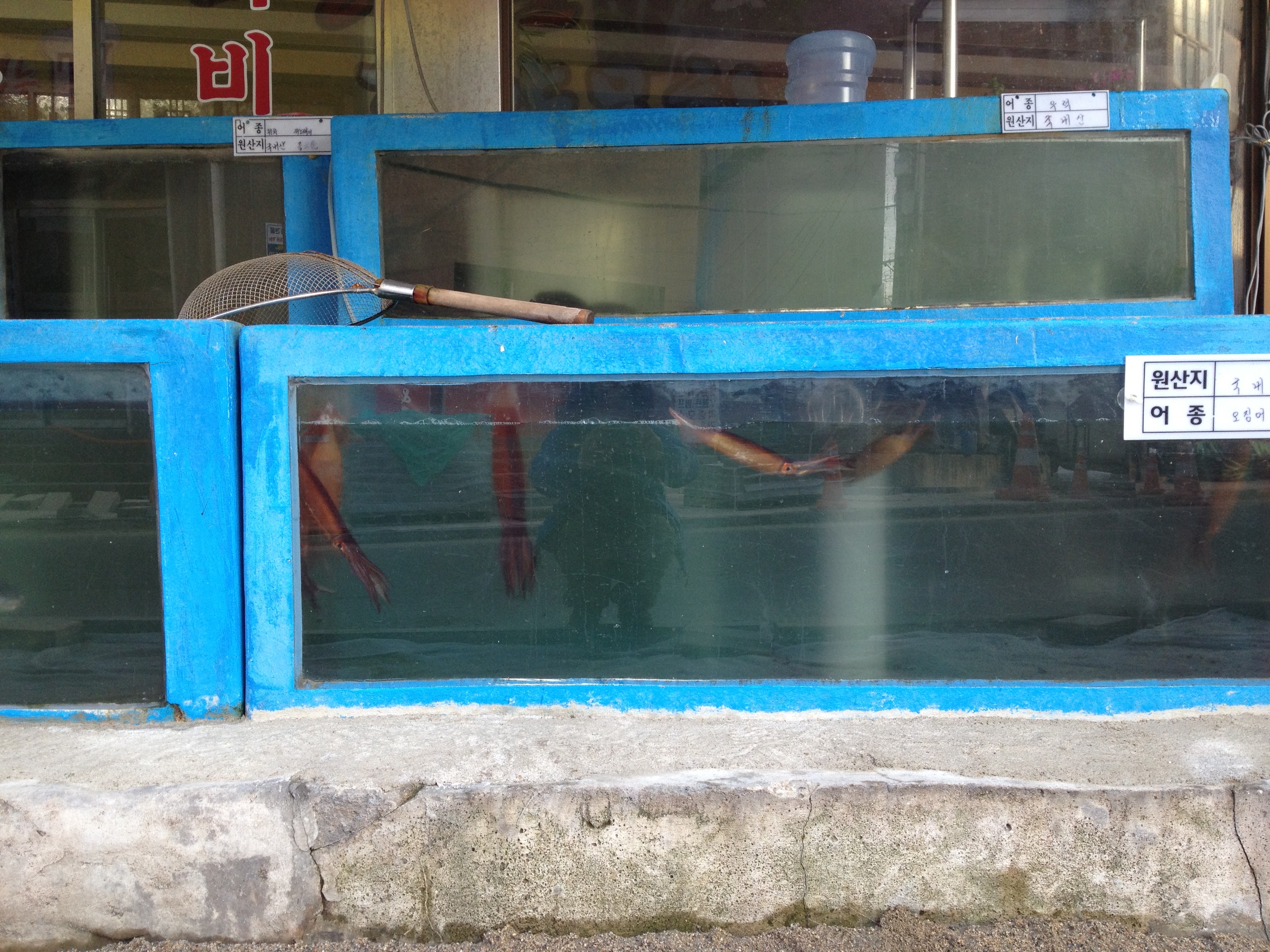 I love calamari, and I was going to seek out some ojingo-sundae to try. But honestly, after passing tanks after tanks of live squid bobbing up and down, staring at me with those googly eyes – I sort of lost the appetite for it.

I have enough guilt to last me for the day. Can you blame me?