Early this year I got to do something I’d wanted to do since forever: go swimming with the wild manatees of Florida. We’re still in early 2017 but I already knew this is going to be one of this year’s top experience. I came to Crystal River, Florida specifically to swim with wild manatees and the experience went above my already ridiculously-high expectation. Manatees are officially my new favorite water animals. Here’s what you need to know about swimming with wild manatees:

Is it safe to swim with wild manatees?

The manatees here in Florida are completely wild as in that they’re not captive animals. But don’t worry, manatees are completely harmless. Manatees eat sea grass and their teeth are tucked in the back of their mouth. They’re about as likely to charge as a plate of burritos. The worst thing they’ll do to you is slobber manatee saliva all over your hair.

I’ve swam with big things in the ocean before but swimming with manatees is something else. They’re not like whale sharks that treat people with indifference; whale sharks know you’re there but they’d rather ignore you. Manatees, however, are curious about people and behave more like puppies. If puppies come in boat size that is. They’ll come to you for kisses and chew on your hair. They’ll grab your arm with their little front flippers. Guys, they ask for belly rubs!

When 2 manatees came snuggling up to me begging for back and belly rubs while looking at me with their basset hound eyes inches away from my own – I was speechless. You know, because I had a snorkel in my mouth. But if I hadn’t, I’d have been shouting over and over again “This is FREAKING AMAZING!”

Because what else could you say? 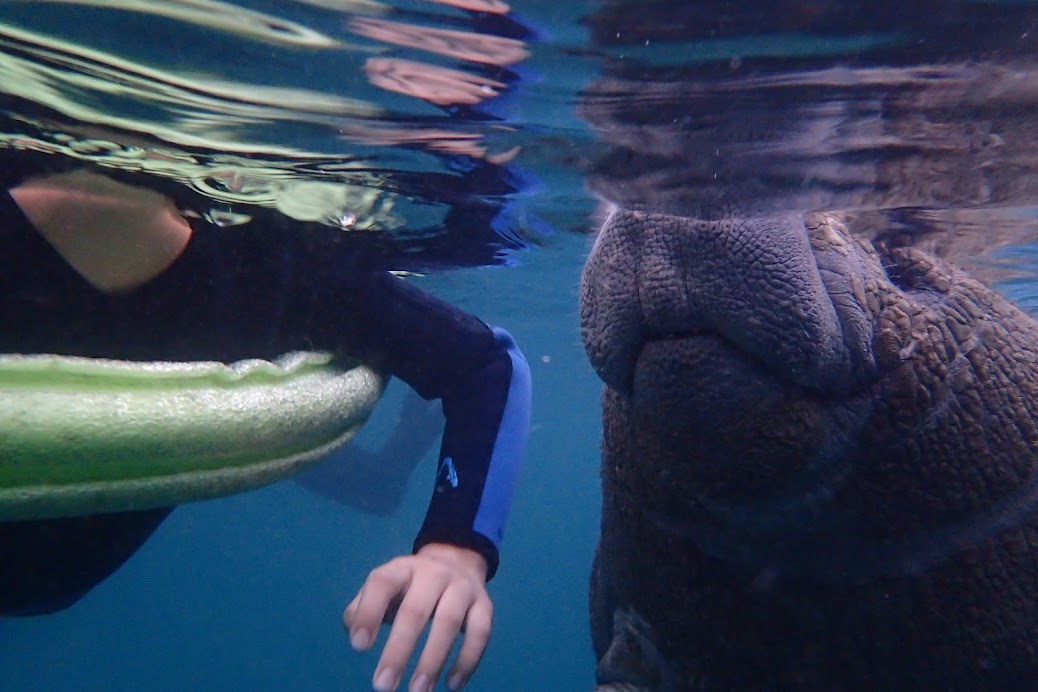 When you open your eyes underwater, it never fails to shock you how close the manatees can be 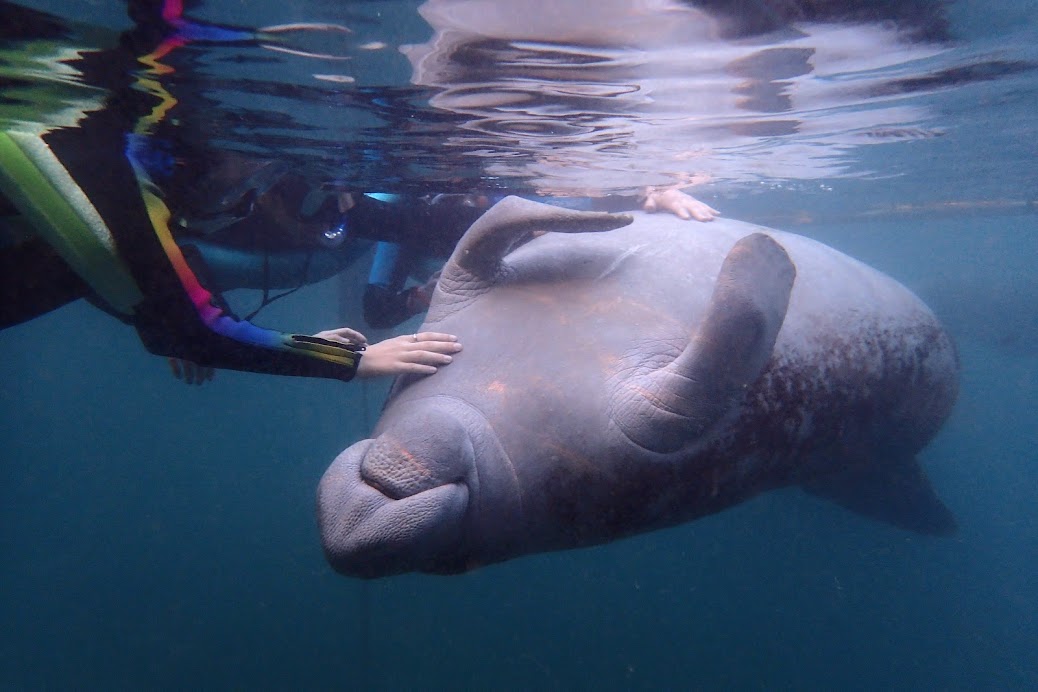 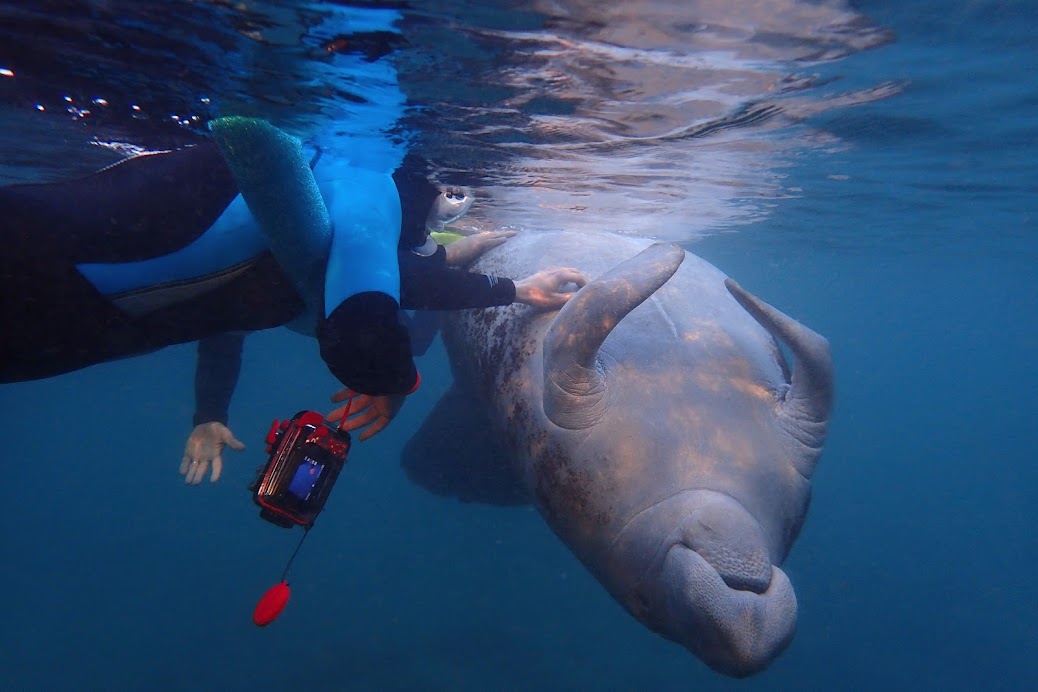 Love those sunrise reflections off his body 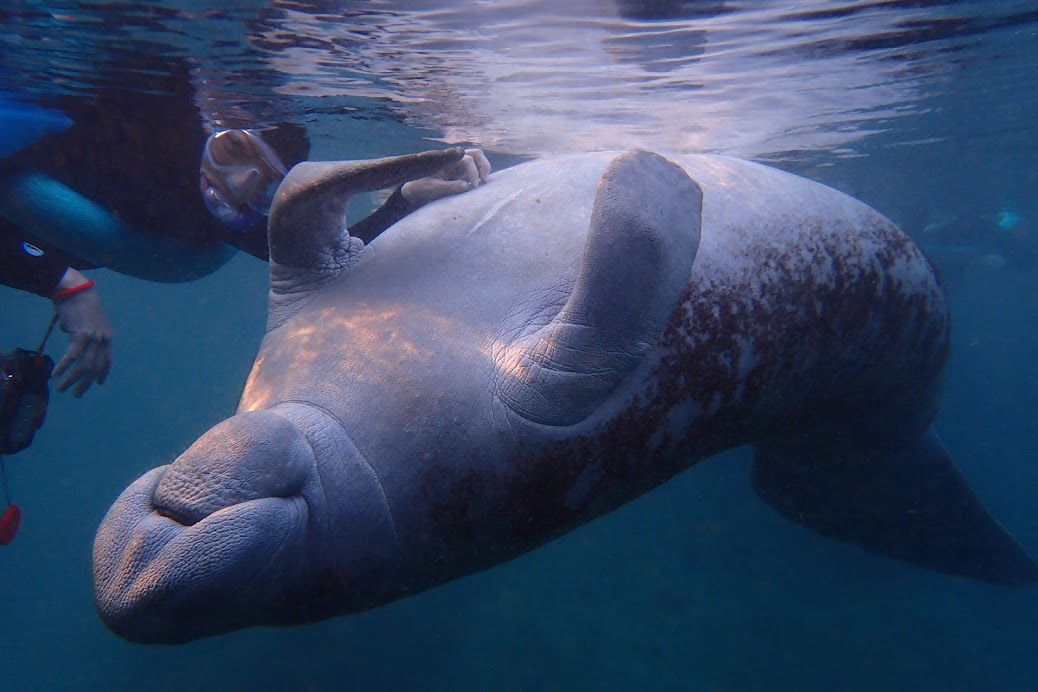 What does manatee skin feel like? It’s that smooth/rough combination of a river rock. 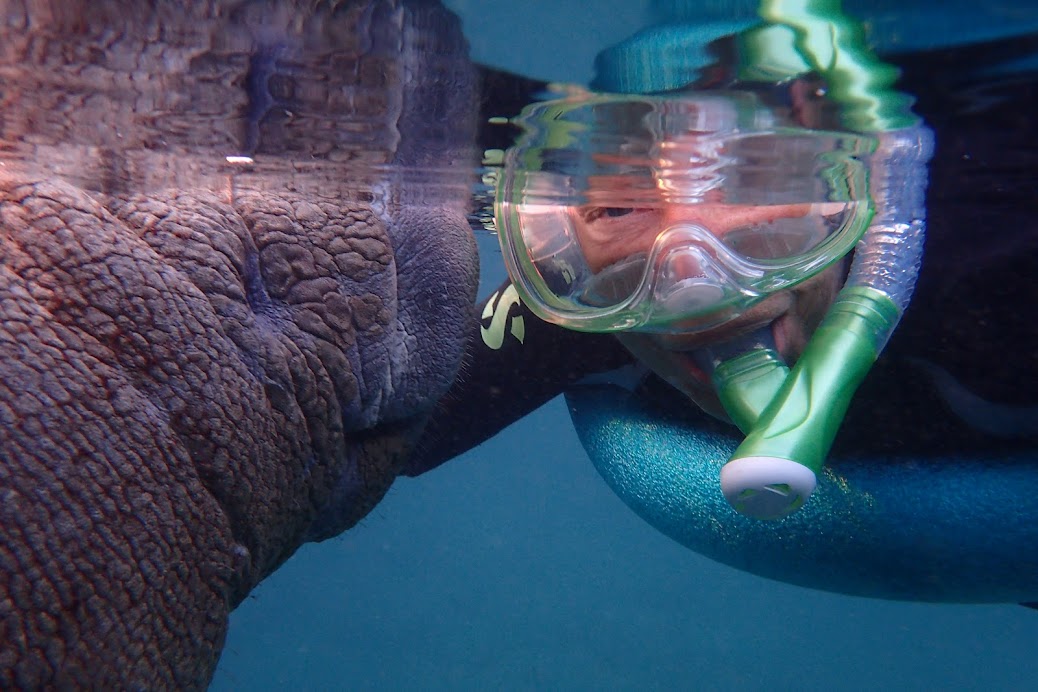 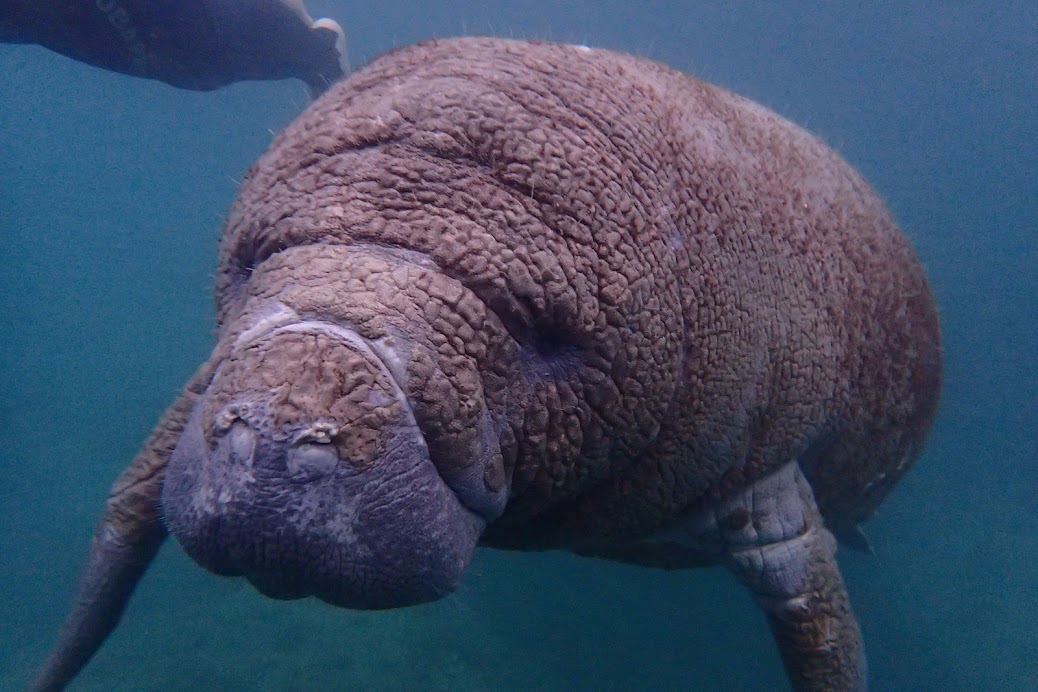 Where to see manatees in Florida?

Well, you need to get yourself to Crystal River, Florida between the months of November to May. Located 2 hour drive north west of Orlando, this is the best place to see manatees in Florida. In this part of Florida, there are only 2 seasons: manatee season and non-manatee season.

Even manatees winter in Florida! Because manatees can’t survive in cold temperature, during winter manatees they seek warmer water. There are springs along the coast of Citrus County each spewing freshwater at a constant 72 degree temperature. It’s just the right temperature for these creatures. During manatee season you can find wild manatees in almost any of the springs, but there’s only one area where you can swim with manatees: the springs in Crystal River.

The best time to see them is early in the morning when they’re at their most interactive. Come during the day and you’ll see them mostly resting, less playing. I came on the earliest tour which starts at 6 am although we didn’t get in the water until sunrise. 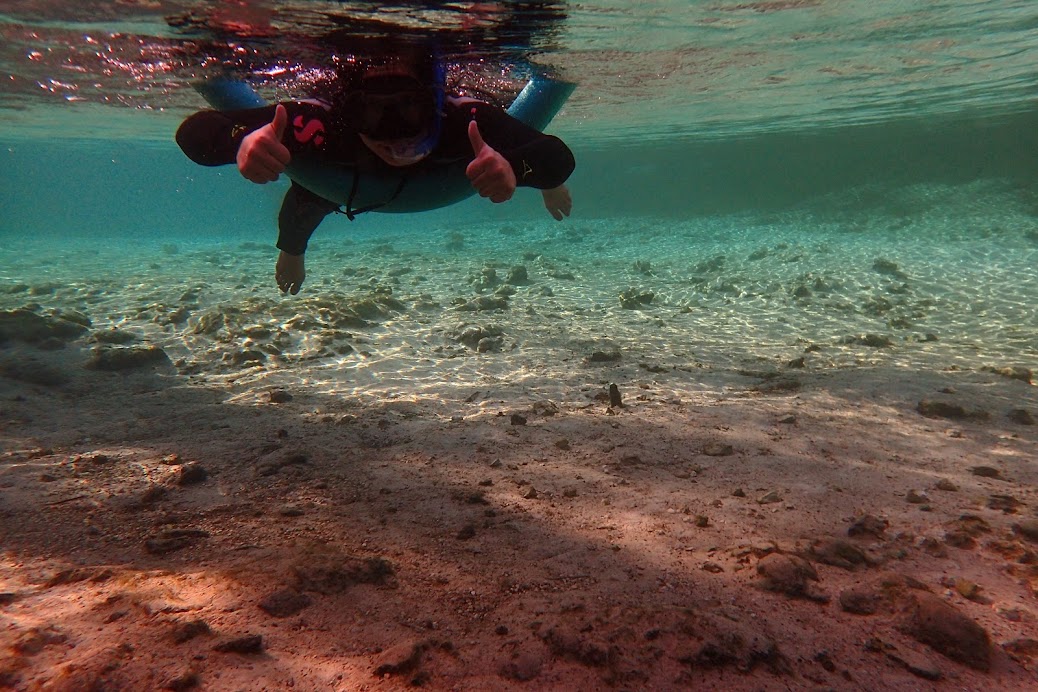 Hard to tell, but I’m pretty sure that’s me giving thumbs up (and shivering). Despite the wetsuit, it gets cold at the springs. 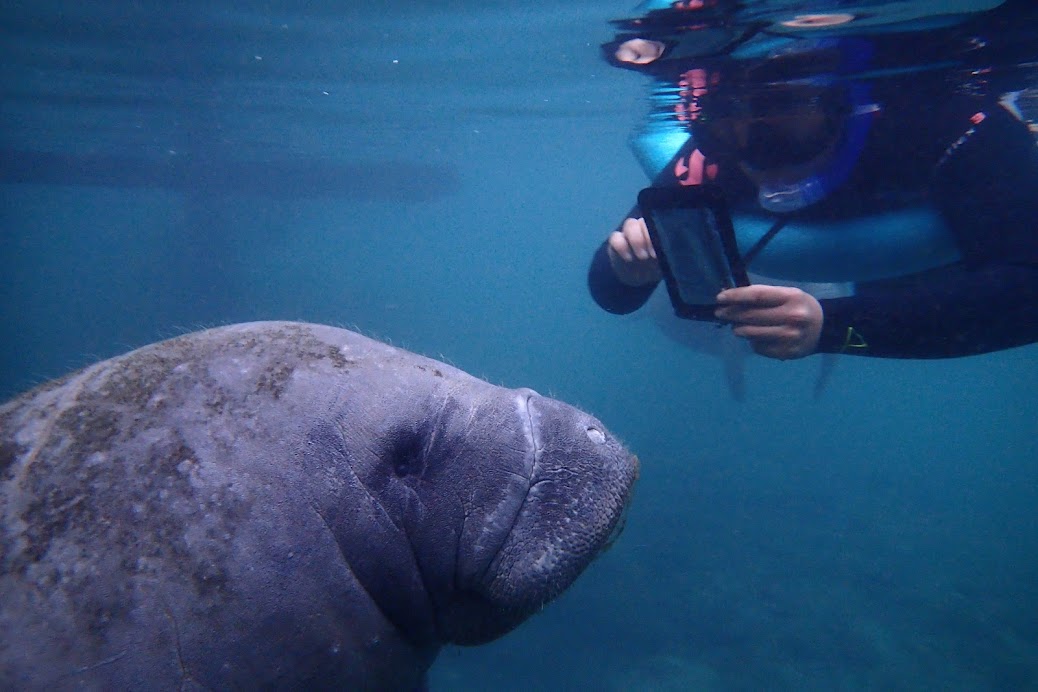 Hard to imagine, but manatees’ closest living relative is the elephants. 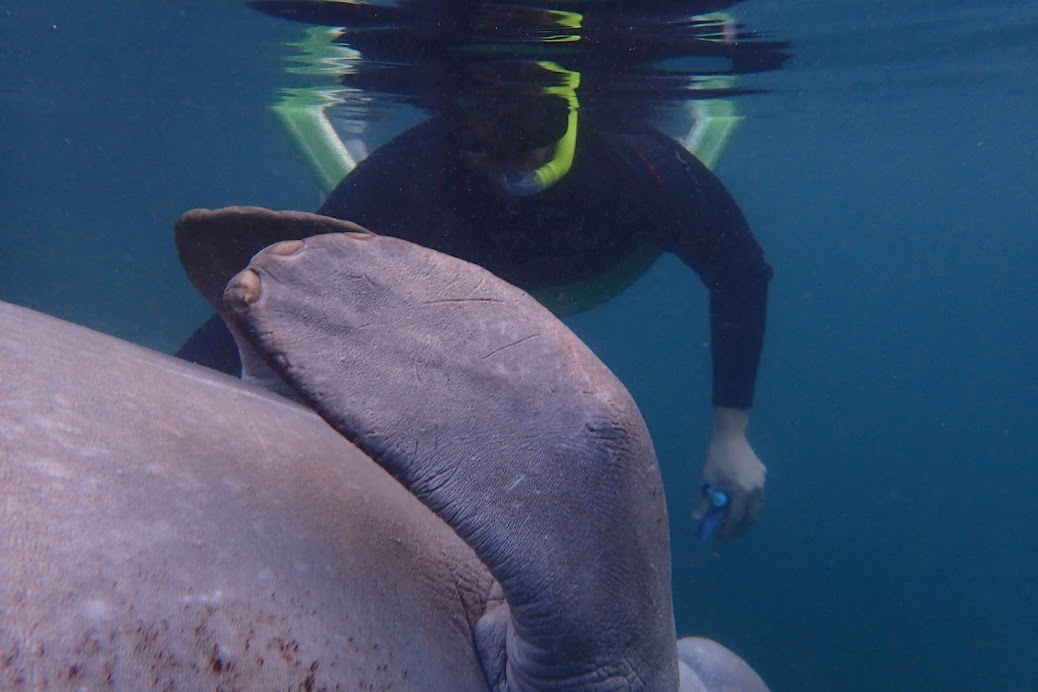 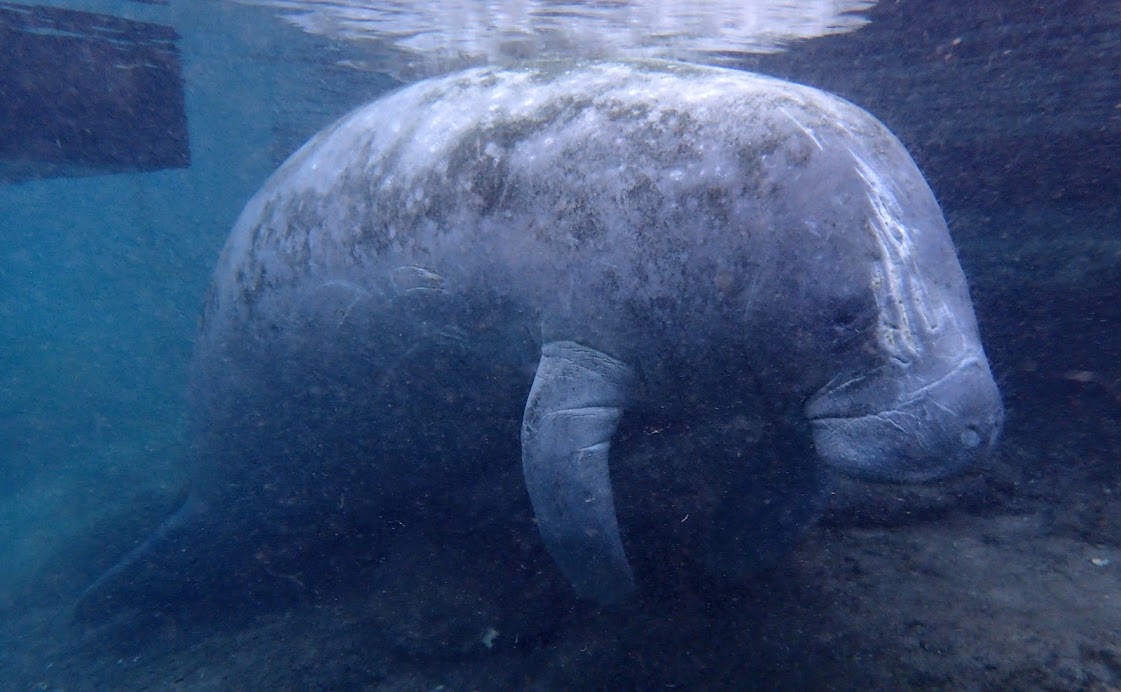 Sort of can see why they’re also called “sea cow”. 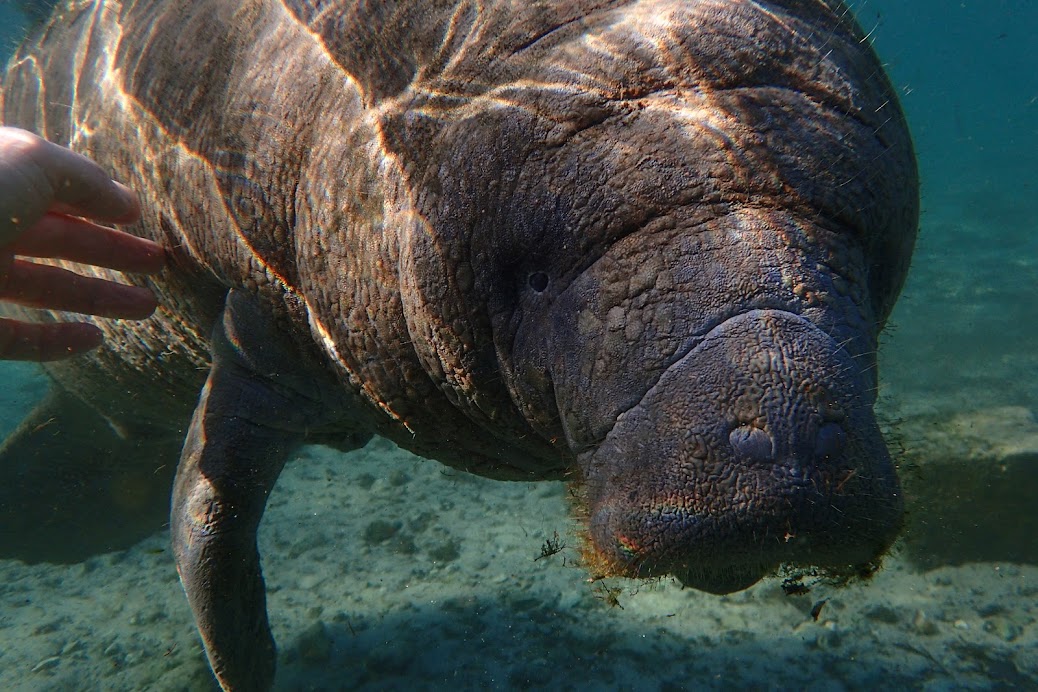 Close up of that remarkable face 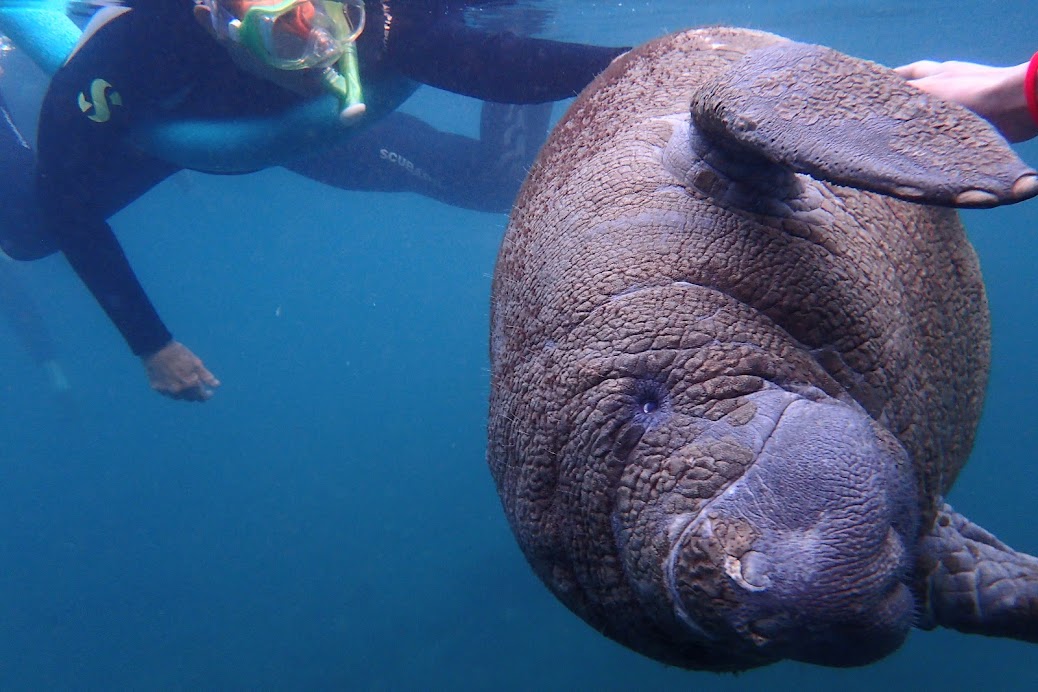 This is a young manatee because he’s still relatively “tiny. The guy in the video below is noticeably bigger. He’s also covered more in barnacles showing his age.”

Is swimming with wild manatees ethical?

Any business involving wild animal-human interaction always has pros and cons. The last thing I wanted was to partake in some irresponsible animal tourism. After doing some research, I decided that the experience was within my comfort zone especially when done with a reputable operator. But of course you need to do your own research and make up your own decision based on your own ethic comfort zone. I will tell you my own experience though.

My experience with Bird’s Underwater
At Bird’s Underwater, they made us watch an introduction video before hand about how to behave around manatees – and I’ll tell you, there were some things shown on the video that churned my stomach: people stepping on manatees, poking them with sticks, coralling/cornering them. In case it wasn’t obvious, these were the things you are NOT supposed to do.

Any interaction will have to happen on the manatees term, thus the need to perform passive observation. No diving down (they gave us noodles to use in water), no feeding manatees, no chasing manatees, and no kicking the bottom as not to muck up the dirt. Manatees are endangered species so there are strict regulations concerning their interactions with humans. There are severe penalties if you’re caught harassing manatees.

We went to 2 different springs. We had the most interaction at the first stop which made it everybody’s favorite spot (and where most of the pictures here come from). I’m guessing it has something to do with it being super early in the morning.

The second stop was Three Sisters Spring, one of the most popular spots to snorkel with manatees. There’s a restricted roped up area where manatees can rest and hang without interruption. And man, they definitely needed it. When we get there there were already 4-5 boats and a few kayakers. The place gets so crowded with even more swimmers and kayakers as time went by and they say it gets even worse in weekends. There were volunteer manatee rangers on kayaks who were making sure that the rules are being followed and nobody ventures into the restricted area. For every tour boat there’s the captain who steers the boat and a guide comes in the water with the swimmers. Not only did he help pointing out manatees and calming nervous swimmers, he also made sure we were following the rules by pulling on our ankles or elbows whenever he thought we were crowding the manatees too much (sometimes it’s hard to tell what you’re doing in water).

Most of manatee deaths are caused by boats. They get strucked by propellers that cause their ribs to break and puncture their lungs. I noticed that every tour boat was very careful in navigating shallow waters. Our guide will scan the water and direct the captain where to steer the boat.

All in all, I felt that the human-manatee interaction in Crystal Springs (and throughout the rest of my visit in Florida) was sustainably and ethnically managed by tour operators, and I left feeling impressed.

If you have a different experience on your tour, do let others know in the comment section below.

Accommodation: Find hotels around Crystal Springs, Florida. I found a room for $25 through Airbnb in Dunnellon about 1 hour away.

Recommended manatee viewing tour: I went with Bird’s Underwater and I highly recommend them. Wetsuit and snorkel gear included. All photos credit in this post also goes to them, except when mentioned otherwise. Disclaimer: I paid full price for the experience. I truly thought they were great.