The People of Burma in Pictures

I took more pictures of people in Burma (Myanmar) more than anywhere else during our trip around the world. This is due to the following reasons:

I’ve learned that looking back at my pictures, those with people on it tend to be some of my favorites. I have horrible memories and sometimes looking at a picture, taken less than 1 year ago, I’d be drawing a blank: “Where’s this?” – but I remember more about a place and its people when the act of taking a picture involves an interaction with a person. Somebody. Anybody. Even if the interaction is as simple as asking them for permission to take their picture.

Because of that I’ve resolved to take more pictures of people during the later part of our trip in South East Asia.

And lastly, because of the people of Burma are just so friendly and photogenic. Like many people (or so I assume), I have to conquer my fear of asking people for their photographs. But I found that many Burmese seem to be a lot more receptive to being asked.

Or it could be that I’ve grown a thicker skin.

A child monk and his buddy – Inle Lake

These two friends were chasing each other in a market place when they ran into me. As a punishment, I made them pose long enough for me to snap this picture before letting them continue their horsing around. This picture was taken slightly after. “Uh, there’s something all over your face” – Nyaungshwe

There are two distinguishing feature of Burmese people. The first is the longyi – a piece of cloth sewn into a tube, and worn like a sarong by both men and women alike.

The second is “thanaka” – a yellow traditional Burmese makeup made out of tree barks people put on their faces (and/or arms) regardless of age or sex. It’s often applied in a circular pattern on the cheeks. Other than cosmetic purpose, thanaka is supposed to also provide protection from the sun and help with blemishes. All around useful stuff. 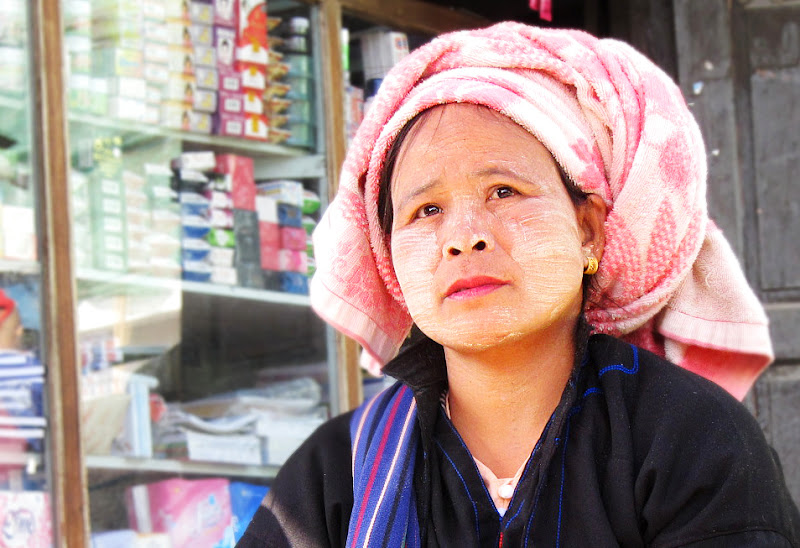 Lacquer, lacquer on the wall – Bagan

The village of Mingalar near Bagan is known for their home-based industry of lacquerware. They made really beautiful pieces of lacquerware using bamboo and/or horse tail hair. A well-made piece of lacquerware can take up to 2 weeks to create and up to 7 layers of lacquer. The patterns are all handmade, carved by tiny, pointy carving knifes freehand – stencil-free.

This guy right here is stripping bamboos into smaller strips which were then used to create bowls. A coffee cup runs about $10 (the opening price was $15). This is why I’ve been recommending those who are visiting Burma to bring more money than they think they would need (Burma is an ATM-free country). Burma is filled with good quality souvenirs, but they sure are pricey. 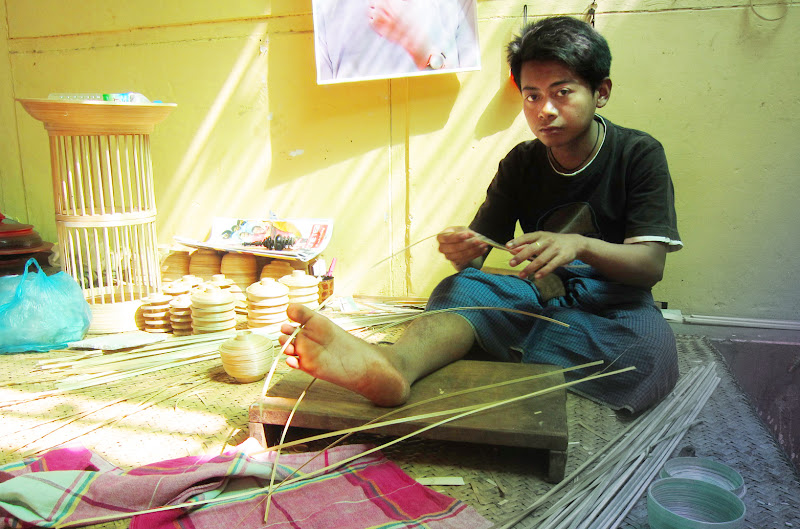 Every morning between 6-7 am, the monks would make their rounds around Nyaungshwe to collect alms from the villagers. These monks would walk barefooted on the cold ground on very cold mornings when the sun was barely able to penetrate through the morning mist – no wonder they walk so fast? Villagers would scoop out cooked rice or boiled lentil into their alm bowls.

I like to go in the morning to my favorite Internet cafe (International Pancake House) and it happens to be on the monks’ morning route. One day, a disturbing scene greeted me: a group of tourist sticking their cameras on these monks’ faces. Mobbing them, basically. One of them was actually on a rickshaw, following these monks around so he could keep snapping pictures without actually bothering to move his legs. 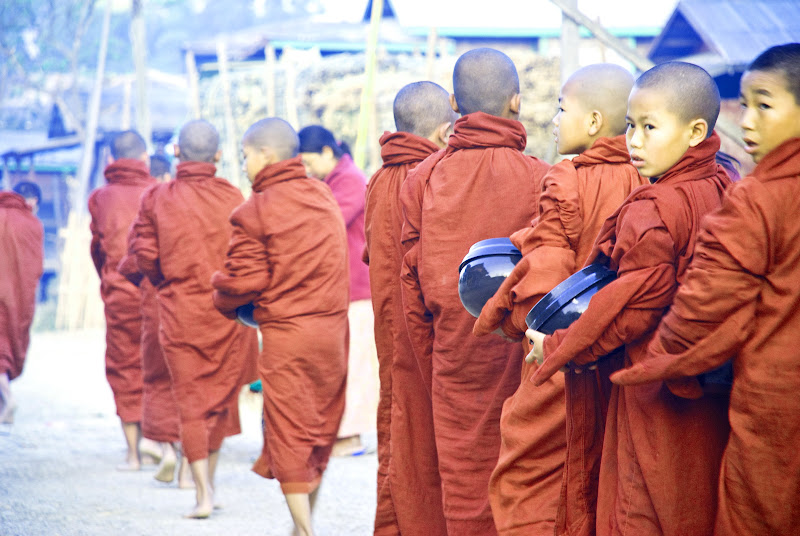 The local market in Nyaungshwe – the city where most people visit Inle Lake from – isn’t particularly the most colorful. As a matter of fact, when the big traveling market doesn’t happen to be in Nyaungshwe, it’s technically deserted with a few people selling just the essentials with more tourists than locals. This lady seems to hope I’d buy something after taking a picture of her – I would but I wouldn’t have known what to do with a piece of dried fish. 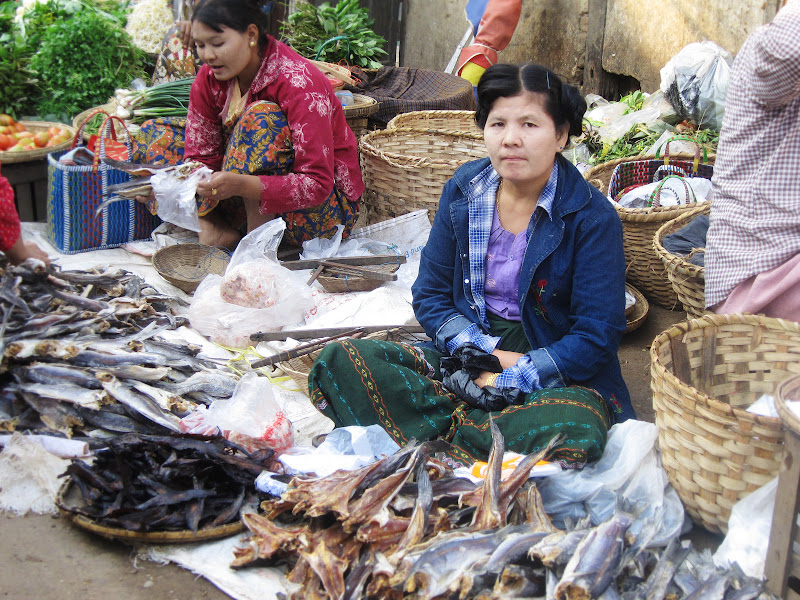 This kid spoke no English whatsoever but was intensely interested in what I was doing. I wish I could say I was doing something remotely interesting but I was mostly just standing there enjoying the golden hour bathing the rice paddies around me.

On my bike ride back to Nyaungshwe, I passed by a monastery down a dirt path and I decided to take a look. This kid came out from behind a pig sty and stared, and stared, and stared… until finally I pointed at my camera and at him in that universal gesture of “Can I take your picture?” And he smiled. 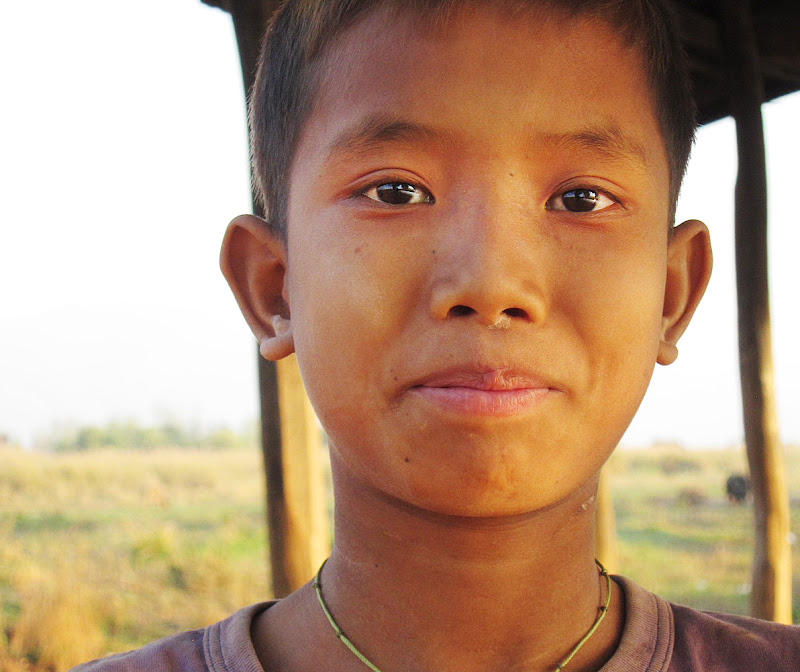 The tofu in Burma is made of chickpea flour as opposed to your old-soya beans. This gives it a creamier taste to the tofu. It also gives it a yellowish tone. The texture and the color reminds me of creme brulee. Taste – not so much. Still, I found it delicious and ate it whenever given the chance.

It can be found in a very common dish called “To hpu nway” – combining the fried Burmese tofu with mushy chickpea flour into a delicious, albeit slightly devoid of form, meal. Or simply fried. Oh-so-good!! 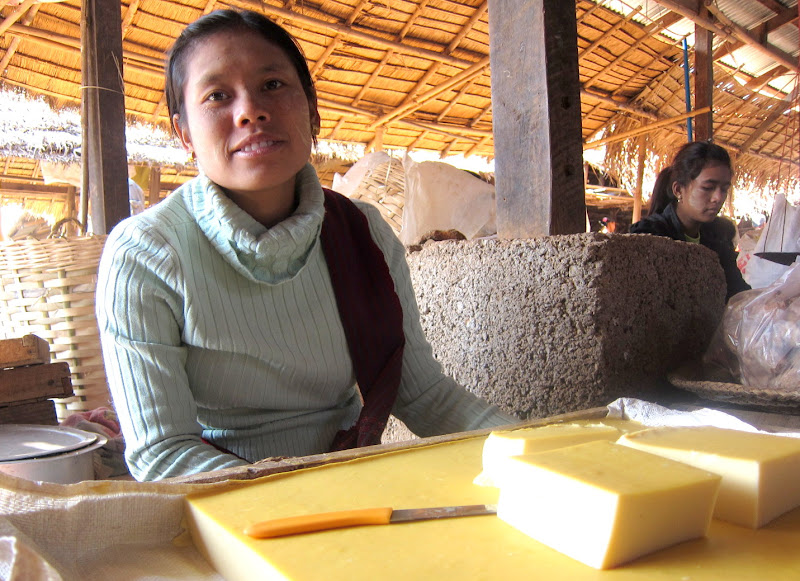 During our random bike rides around Nyaungshwe we’d pass by these big, beautiful buildings that often turn out to be a meditation center. There are often only a couple of monks living in these buildings. Oh boy, these monks sure love to chat. We got invited to a couple of these meditation centers simply by passing by. 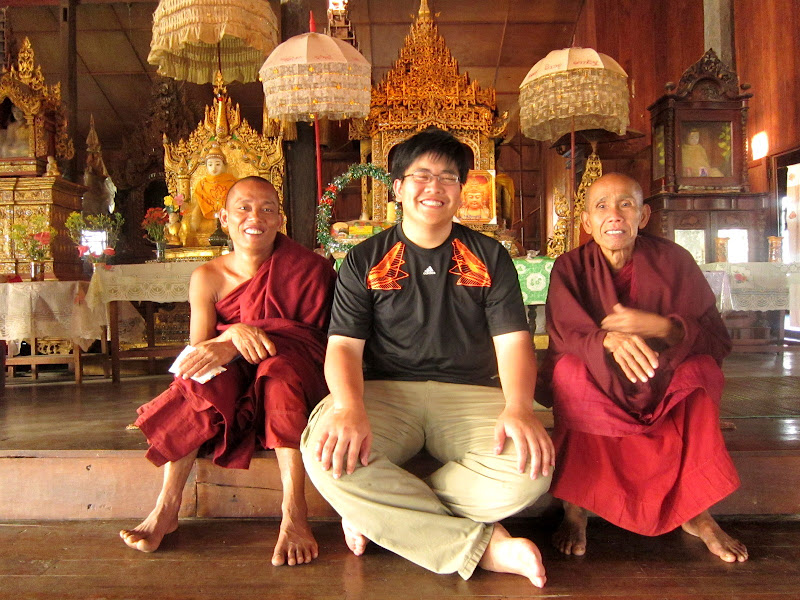 During this mini-project to capture as many pictures of people as possible, I realised that I really missed my DSLR. I love my point-and-shoot, but portrait taking has higlighted its limitations: mainly its shutter lag and its zoom capability (the blurry background whatchamacalit).

But I still hope these pictures capture the essence of Burma and its people that I’d like to share with you all. What makes them unique and what makes them memorable. Burma is changing so rapidly I’m glad I came to visit when the people are still as interested in us – the foreigners – as we are in them. 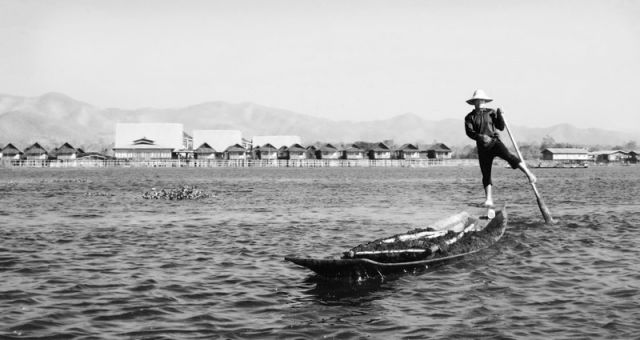 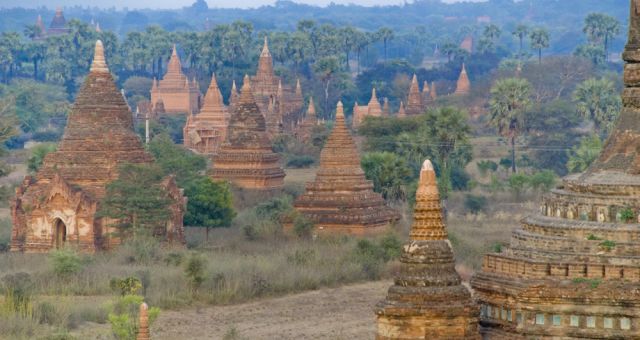 The Fairytale Temples of Bagan – Even better in real life