How to Watch Sumo in Tokyo

There are 6 grand sumo tournaments held each year, 3 of which are in Tokyo. When I learned that my visit to Tokyo would coincide with one of these, watching a sumo match became one of the top things I wanted to do in Tokyo. It’s not that I like sumo, or know anything about sumo beyond the clichés (it’s like wrestling, but with loincloths, and funny haircuts?). But I am aware that sumo, despite its declining popularity, is still a big part of Japanese culture. How big? They sold out every single day of the tournament.

However about 350 tickets are sold the same morning at the gate on first-come-first-served basis. If you’re not able to score an advanced ticket from the official sumo site, getting one of these general admission tickets is the only way to see a sumo match in Tokyo.

That was why I found myself standing inline outside of Ryogoku Kokukigan stadium at 7:30 am one morning. The line was already quite long. There were attendants managing the line and giving out numbers to people. Everyone must be present to get tickets so I assumed that as long as you get a number, you’ll be guaranteed a ticket. 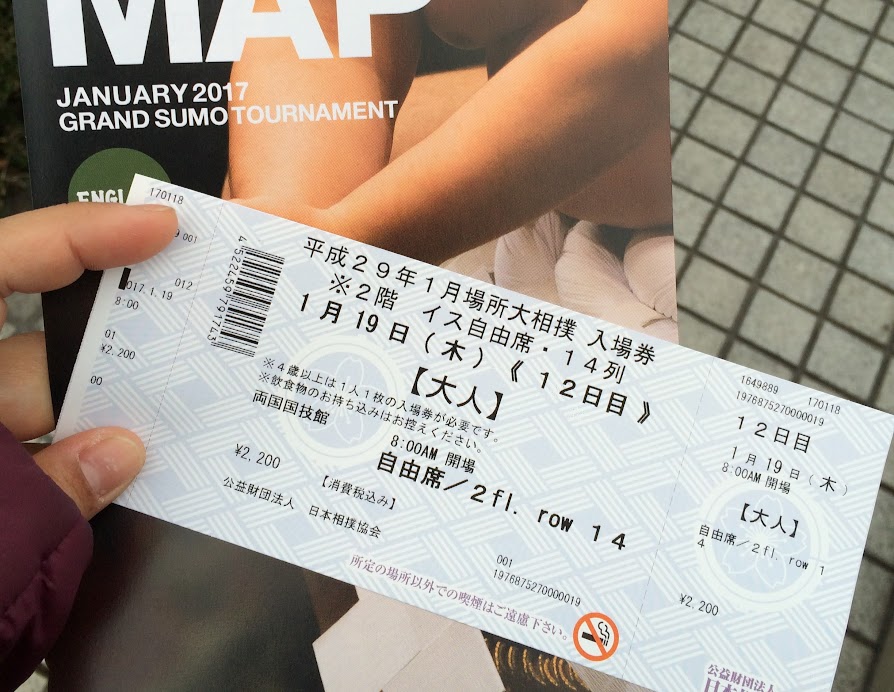 The colorful banners outside the Ryogoku Kokugikan by Ian Kennedy

Even though the match goes on all day long, the coveted bouts among the the upper divisions don’t start until around 3pm. The morning bouts are for trainees and the lowest ranked wrestlers.

I went in anyway to see the novices slapping each other and get a feel of the stadium. They allow re-entry once so I could return later in the afternoon. In the morning the stadium is mostly empty. There was not much going on and the restaurants were still closed. 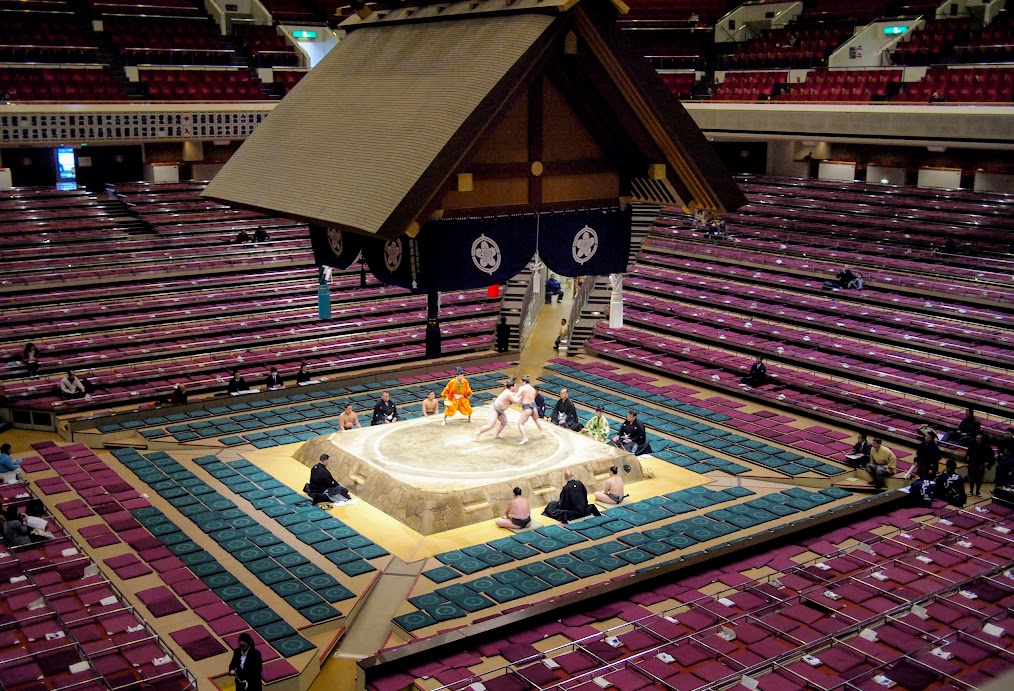 Mornings during a sumo match day are for novices.

The bouts and rituals

I came back at around 3pm and wow – what a change in atmosphere! The stadium was filled up with even more people streaming in, the hallways were crowded, and there was a buzz of energy in the air.

General admission ticket holders are relegated to the last row of the second floor. Pretty much as far as you can get from the dyoho – the ring where the action happens. Surprisingly, you can still see the action pretty well. If you see an empty seat closer to the dyoho, you could sit in it. Just be ready to vacate when the owner arrives.

Around 3:30pm at the day of the match, wrestlers from the top division perform their ring entering ceremony. These rikishis (wrestlers) wear colorful aprons, called keshō-mawashi, that are heavily embroidered with thick tassels at the bottom. The announcer calls out each wrestler’s name as he enters the ring. You can tell who the crowd’s favorites are based on the cheers from the audience. 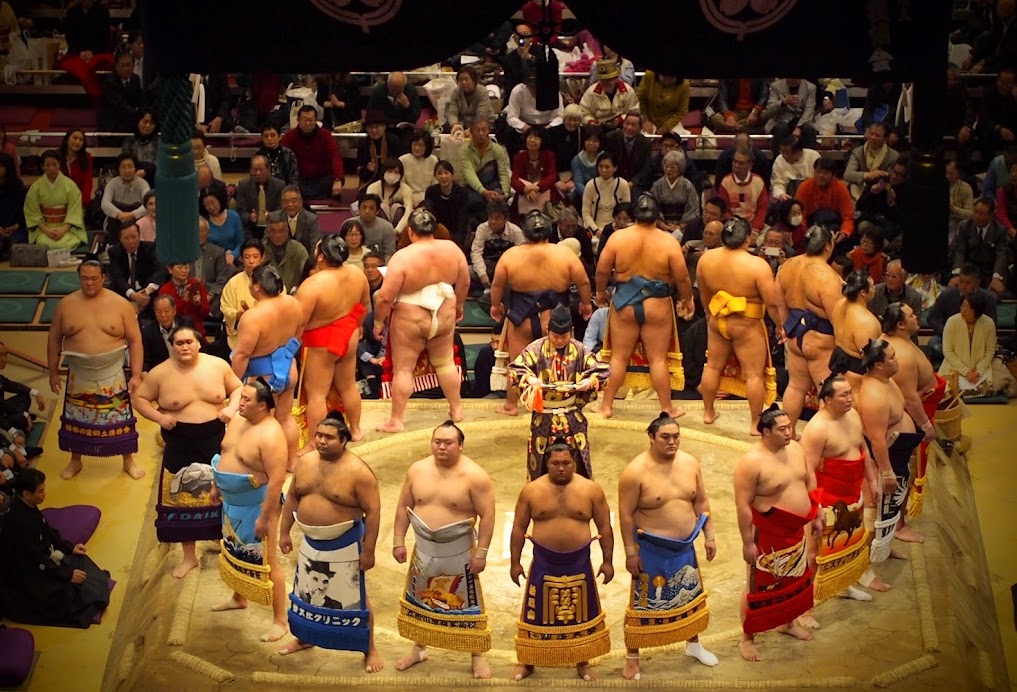 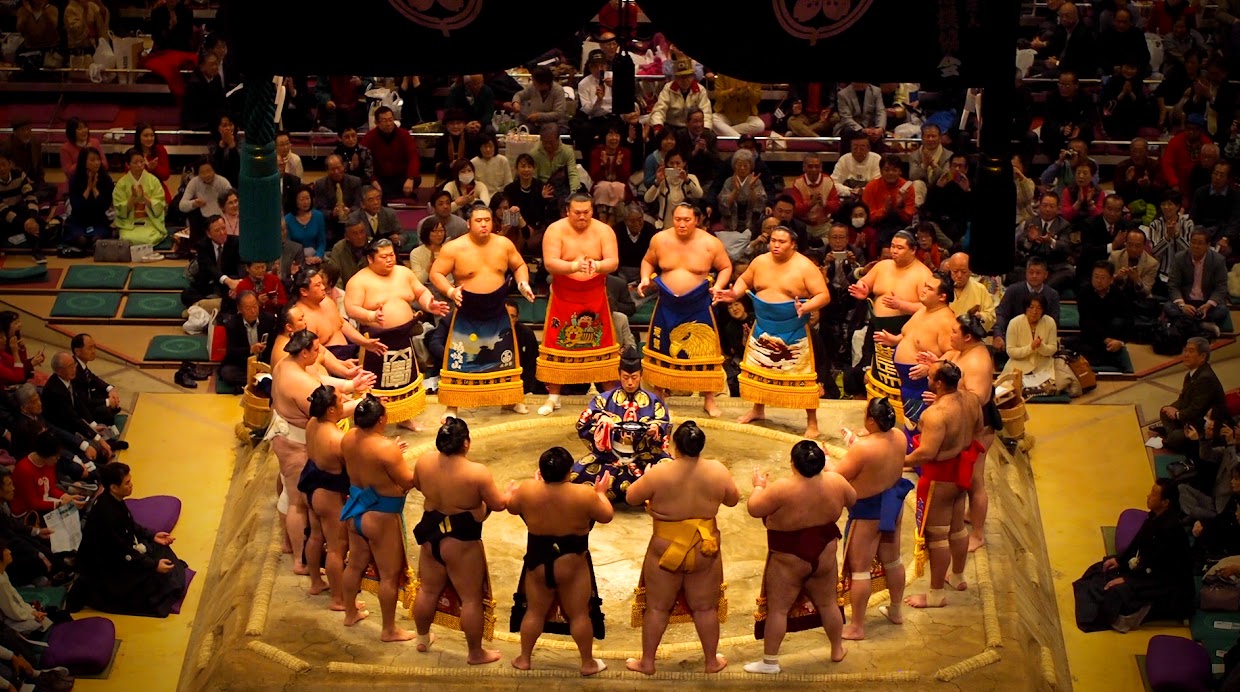 A sumo match is about 99% ritual and 1% excitement. Most of the bouts last mere seconds. Between each bout, there’s a disproportionately long, ritualistic preamble of foot stomping, belly slapping, salt throwing, and false starts. I spent the time during these rituals (it gets repetitive after awhile) to look up the history behind these pre-match rituals. Why do sumo wrestlers stomp their feet? Or throw salt? A lot of these have something to do about ‘stomping’ out evil spirits (the leg stomping), purifying the arena (the salt), and intimidating your opponent (belly and thigh slapping, and the false starts). These rituals surrounding a sumo match haven’t changed much since the Edo period. After the buildup, the wrestlers charge at each other at full speed and this is when it gets very exciting. There’s lots of jousting, pushing, and grunting while the crowd goes crazy. The gyoji acts as both a referee and cheerleader shouting encouragement during the bouts. One wrestler will get slammed to the ground or pushed off the ring and it’s over quicker than it begins. Bouts that last longer than 1 minute are rare. The loser walks off the ring while the gyoji points to the winner with his fan. 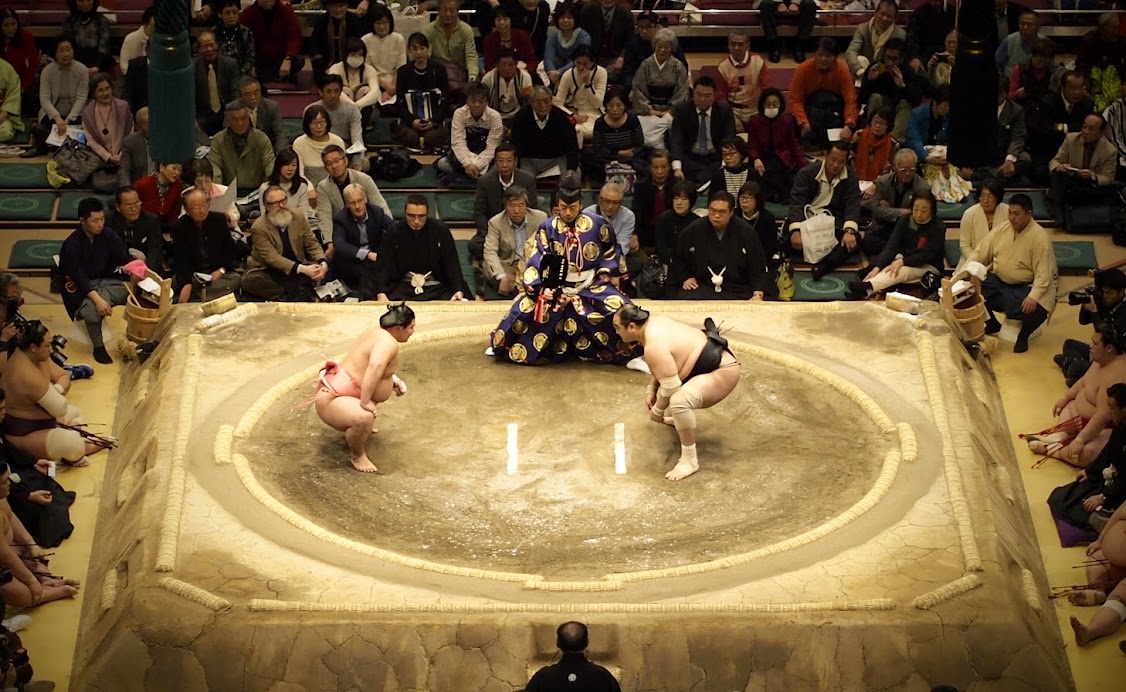 Pre-bout ritual of trying to intimidate your opponent. 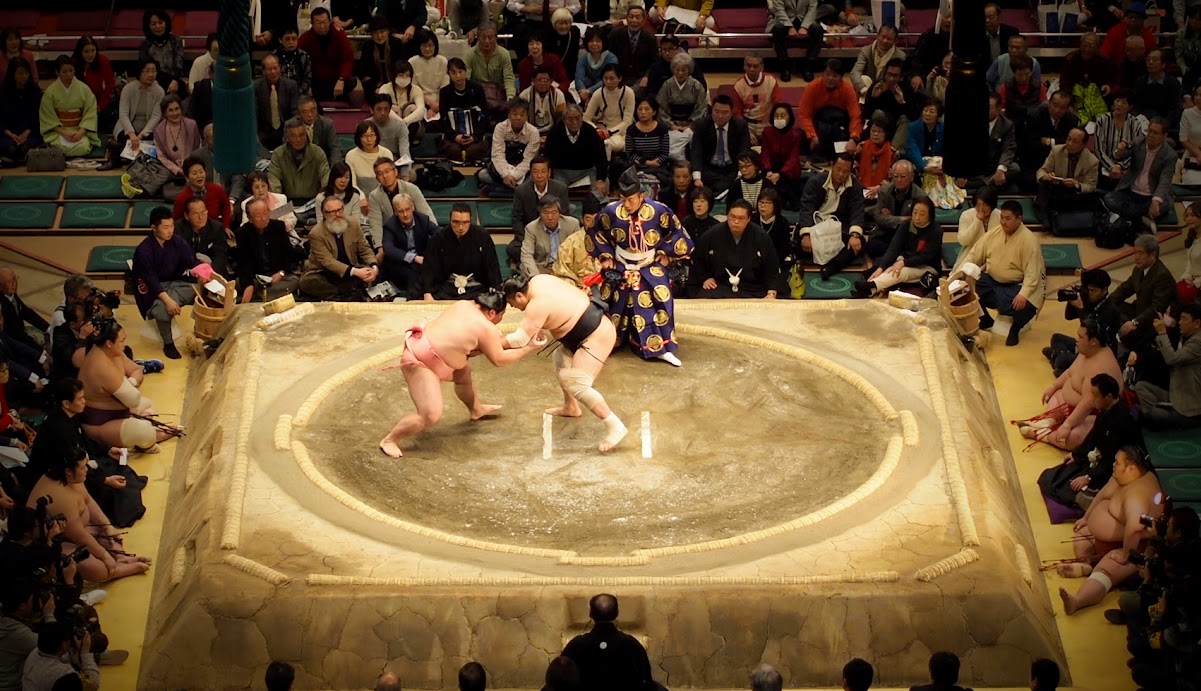 You lose the match by stepping outside the ring, our touching the ground with any body part except your sole – by Ian Kennedy 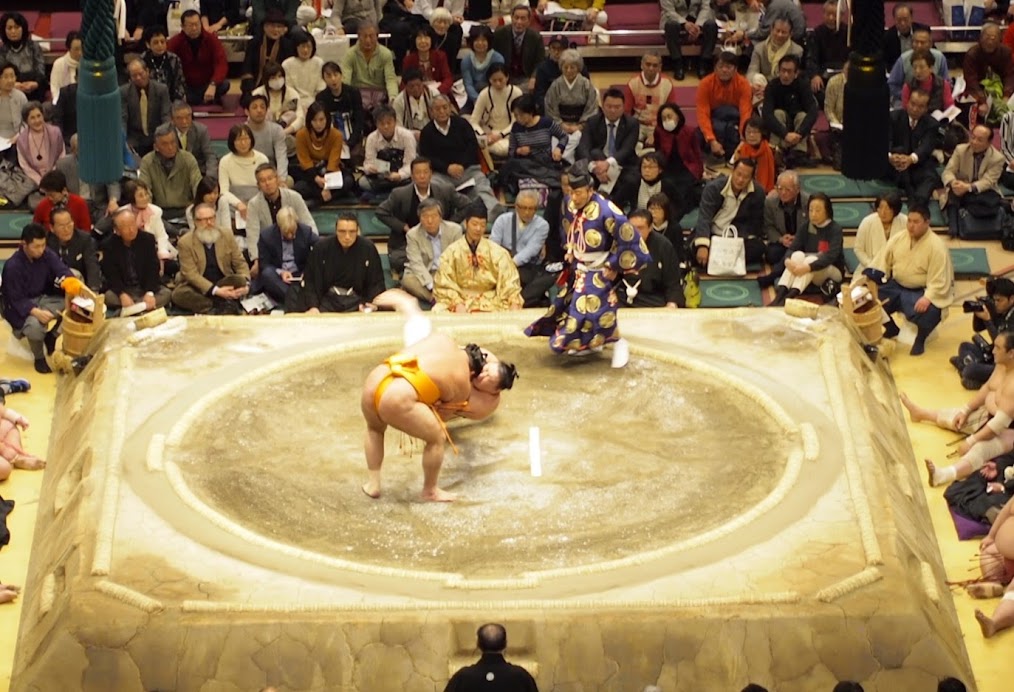 Seconds before yellow’s opponent got slammed onto the ground 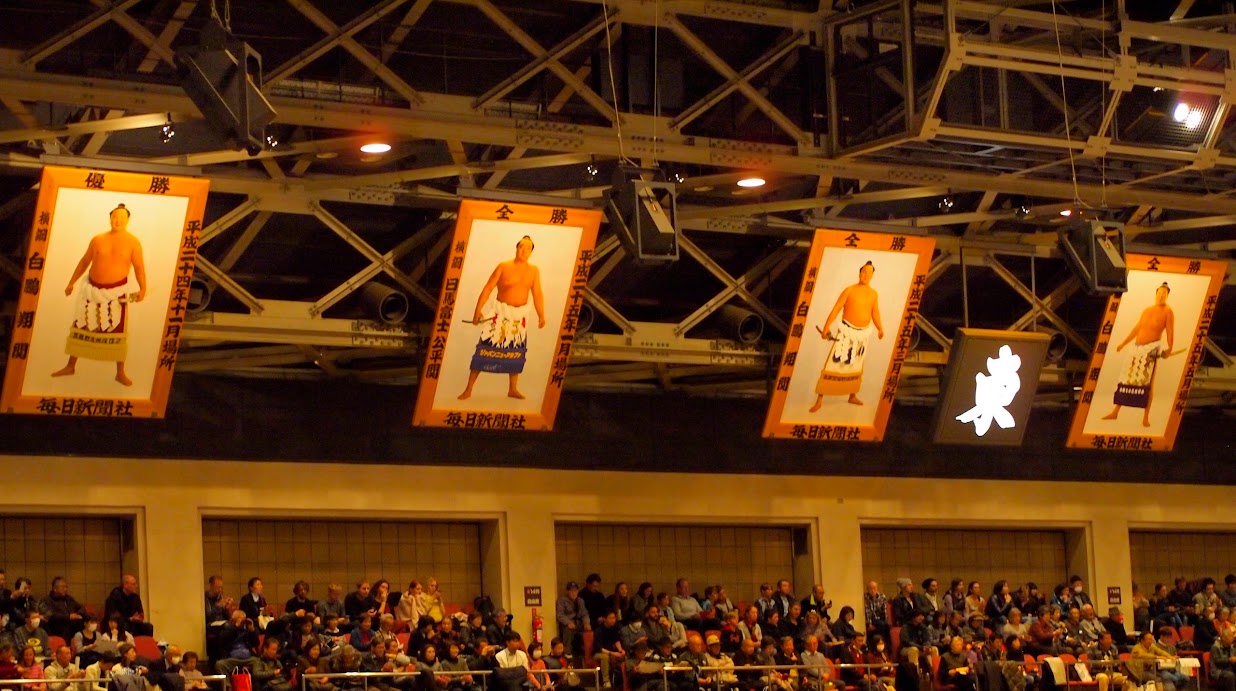 If you hang out by the exit or by the market next to the stadium, you have a good chance to run into sumo wrestlers on their way to/from the match. If their size doesn’t tell them apart, their yukatas – which they’re required to wear while in public – will. Some even wear those wooden sandals and you can hear them clip-clopping from a mile away. 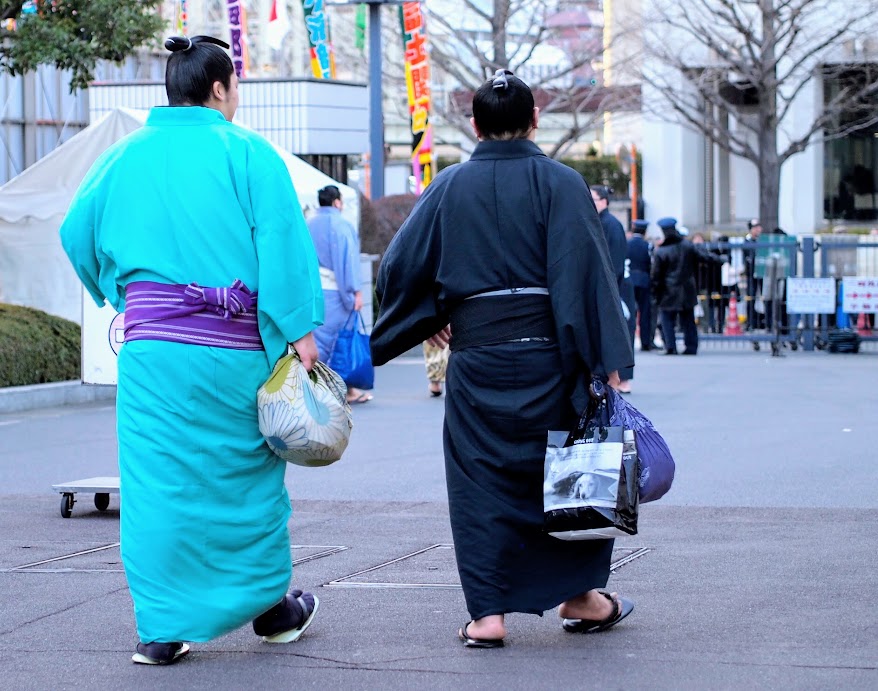 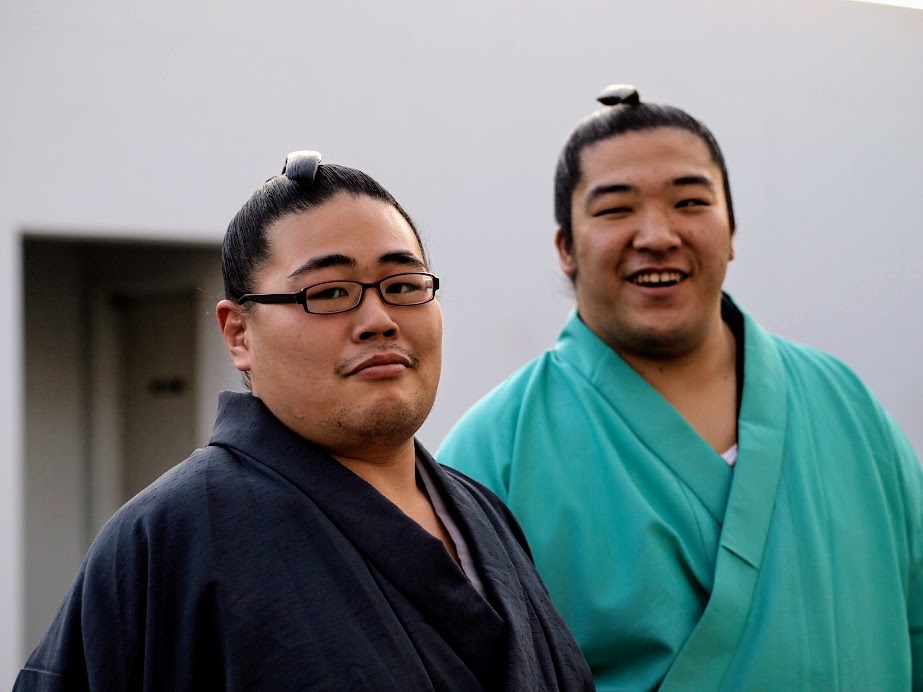 They all seem very accommodating to picture requests

How to watch a sumo match in Tokyo when there’s no grand tournament (and for free)?

The wrestlers live and train in beyas or stables which can be found throughout Japan. However, the majority of them are in the Ryogoku area of Tokyo. Some of these sumo stables open their training sessions to the public with no fee (with varying requirements – many require call aheads/reservations).

One of the visitor friendly beyas that speaks English is hakkakubeya.com – you can write to them (support at hakkakubeya.com) to make a reservation for a visit. You can also take guided tours to see sumo practice – some include a meal of chanko nabe, a sumo-sized hotpot of seafood, tofu, and vegetables commonly eaten in vast quantity by sumo wrestlers as part of a weight-gain diet.

I was hoping to see one of these sumo training sessions as well. I think these morning training sessions would focus more on techniques and less ritual – which I would enjoy more. It’s also possible to have more interaction with the wrestlers since it’s a much more casual atmosphere. Unfortunately I learned that training sessions are closed to public during grand tournaments.

Regardless, I’m glad I had the opportunity to see a sumo match in person. Even though I don’t see myself becoming a sumo fan anytime soon – to be honest I only stayed for a few hours before boredom took over – it provided me with a glimpse of Japan’s most spiritual and athletic tradition. I highly recommend it!

Some tips on watching sumo in Japan:

– If you come early enough (1-2pm), you can actually go in on the first floor regardless of what your ticket says. I didn’t know this at the time. You can get a much better look at the ring from here.
– Outside food and drinks are allowed, even though they also sell snacks and bento boxes inside the stadium.
– Read up about the tradition and history of sumo. Knowing the context helped me make sense of, and therefore, enjoy what’s going on during a match. 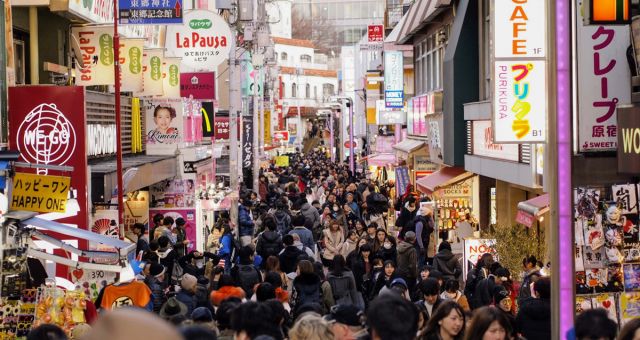 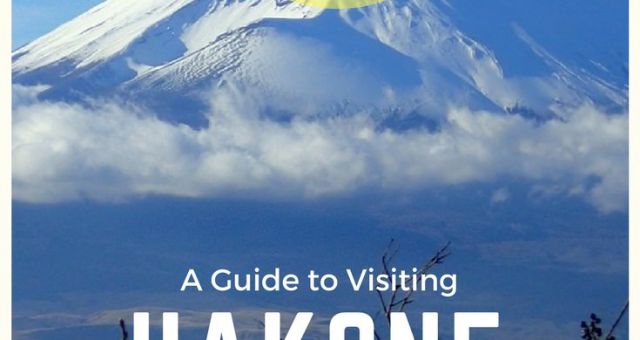