When you think of Hong Kong, what images comes to mind? Quick! I bet se skyscrapers are involved. Maybe Batman paragliding off one of them. Hong Kong does have quite an impressive skyline.

On our trip to Hong Kong, that wasn’t what we were looking for.

I didn’t want to spend the majority of our time in Hong Kong among the crowds and buildings on mainland Hong Kong. We’d just spent two weeks in Jakarta and we had had enough chaos and crowds to last us while. I needed some elbow room.

Knowing this, our friend James (of Notes Plus Ultra) recommended that we made our base in Lantau Island.

“Lantau is a beautiful island – there’s a greanit hiking trail that takes you over the top of the mountains there.”

Sounds good to me.

So we booked a place in Tai O, a small traditional fishing village known for its stilt houses and seafood.

Once common throughout Hong Kong, Tai O is one of the last remaining communities where you can still see these stilt houses.

It is connected to the outside world by a windy, motion sickness-inducing mountain road. There are no skyscrapers here, no neon signs. There aren’t even any cars. This was exactly what we were looking for!

So even though most visitors come to Tai O as a daytrip, we decided to base the whole length of our stay in Hong Kong here. 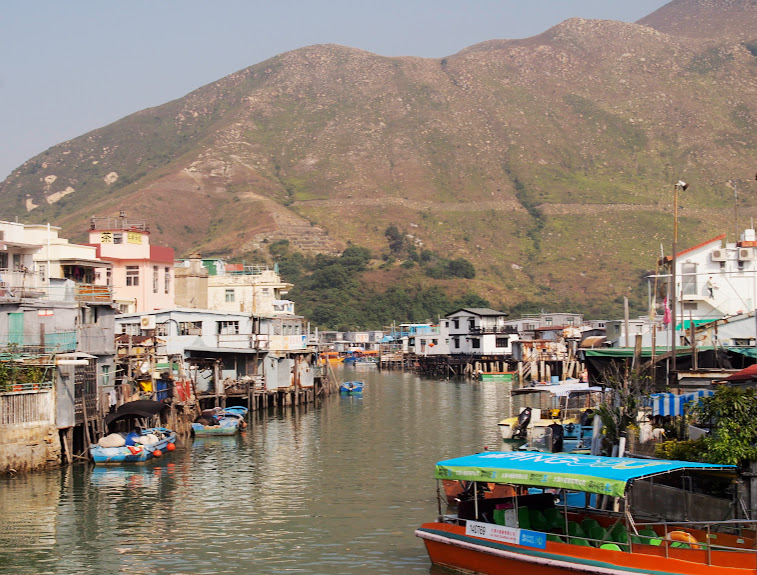 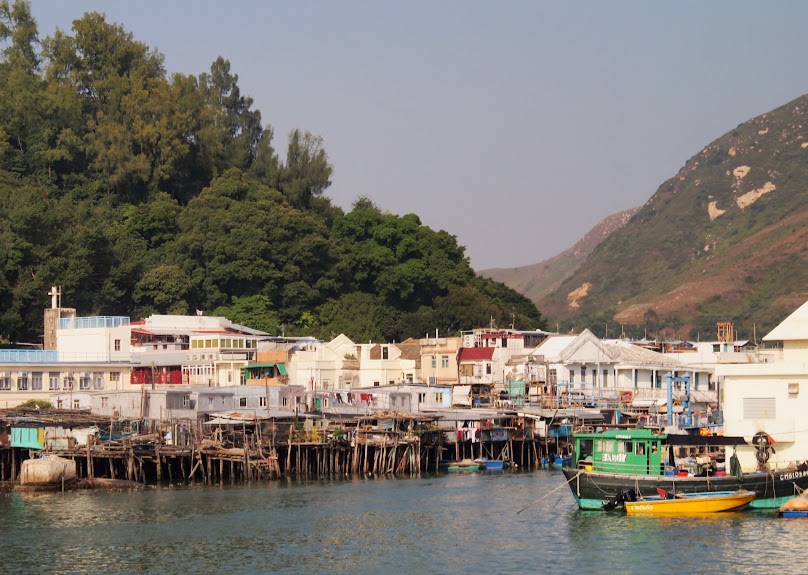 Upon crossing the bridge from the bus stop, we found ourselves in the marketplace. I could smell the ocean from the first step I took inside the market.

Along with fresh seafood: wriggling shrimps and crabs in blue buckets, there were dried delicacies up the wazoo in the marketplace: fish, frogs, scallops, and cuttlefish were some of the more recognizable ones.

In some stalls, I noticed bright orange discs laying on bamboo mats. I learned that these are salted duck eggs. Dried, of course. The villagers of Tai O sure loved to dry things, with the salt used used in the process coming from the surrounding salt marshes. 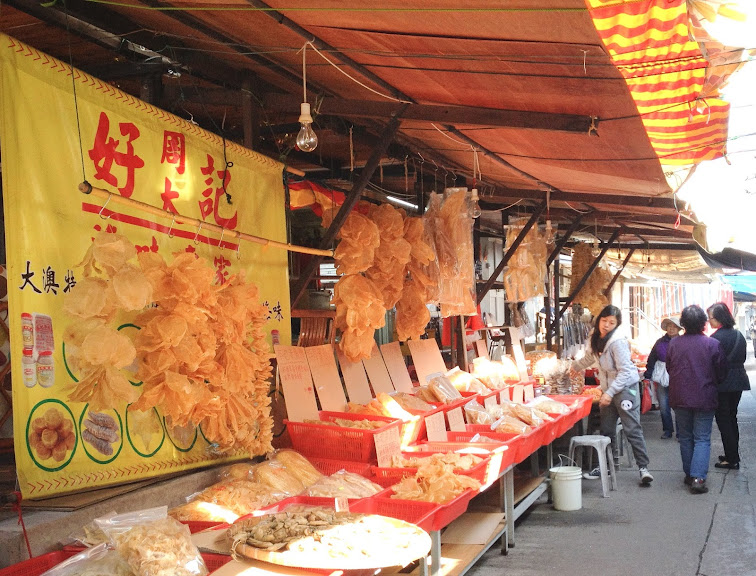 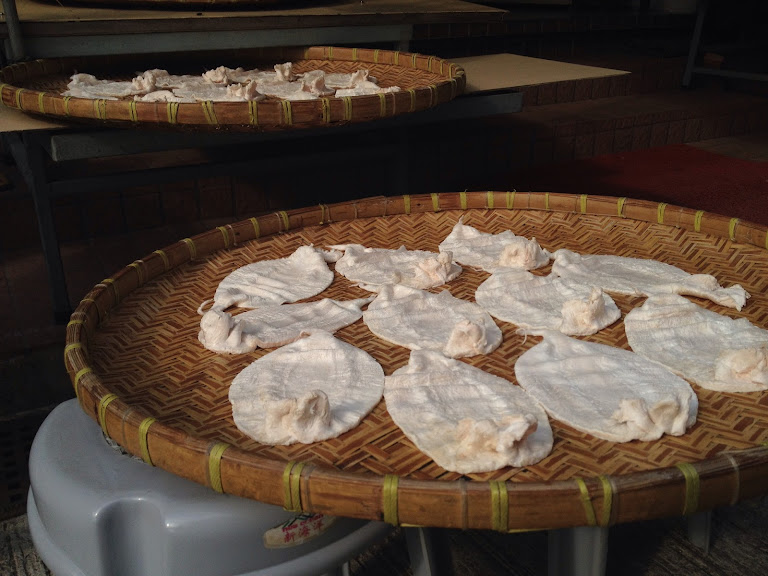 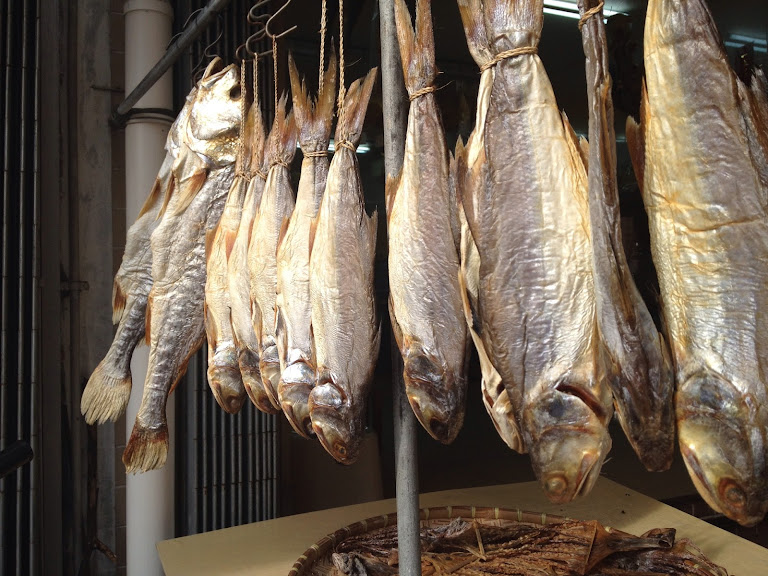 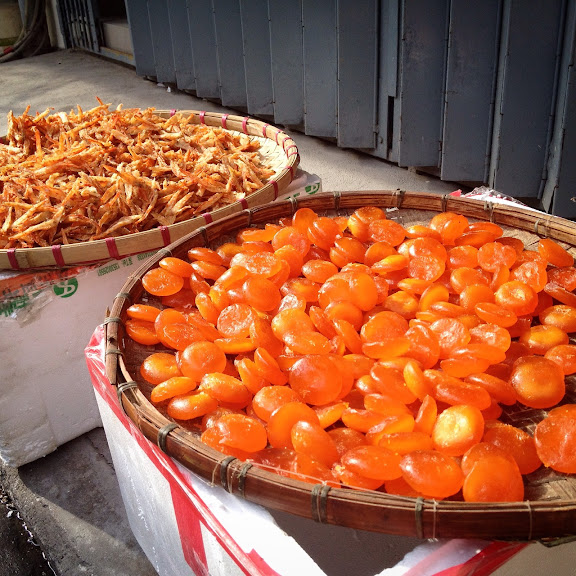 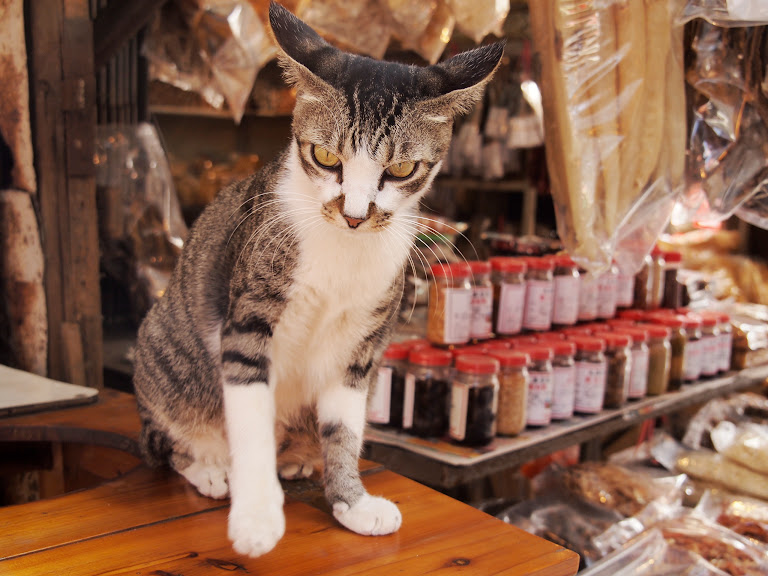 There were also lots of well fed kitties in the community

They were super popular among domestic visitors since there were people walking back to the bus with plastic bags full of these shriveled up creatures.

It remains a mystery to us what exactly you do with them. I mean I know somehow they’ll end up being eaten, but how? Do you soak them in water so they’ll puff back up. You know – like beans? Or do you eat them dry like that?

My fave time in Tai O is in the late afternoon after the waves of day visitors from mainland Hong Kong have ceased and the village returns to its sleepy self.

With no nightlife to speak of, soon the only activities in the village were of shop owners sweeping their porches and a few small restaurants. The latter might be families having dinner outside their homes – it’s hard to tell. 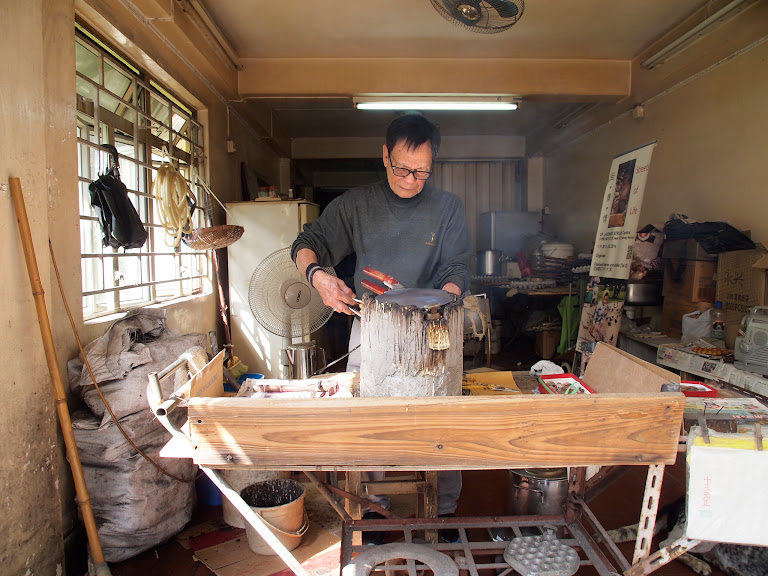 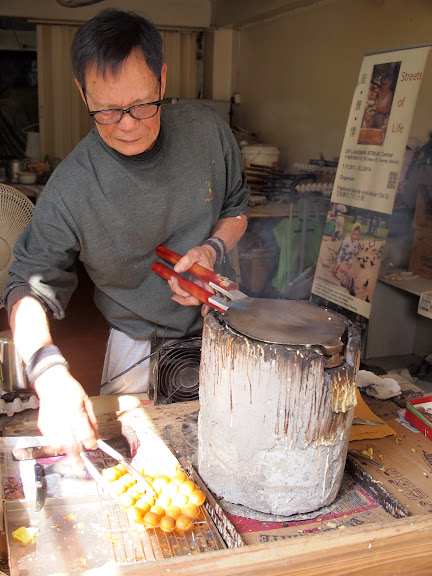 We ate this every day.

As far as traditional villages go Tai O isn’t the most colorful or picturesque. The houses are claustrophobic shacks painted strangely in metallic silver.

During my exploration, I would try to catch a glimpse inside of any open doors, curious to see how people lived in such tiny spaces. It reminded me a lot of my Chinese grandparents’ house back in Indonesia: dark and small and crammed with odds and ends that have accumulated over the years.

There would be this one 60w lightbulb for the whole room that often have no windows. And after your eyes adjusted to the perpetual darkness you realized that, Holy crap! There’s a whole family in there staring at you staring at them!

There’s a loop trail that takes you up a ridge of small hill on the back of the village that gives an overlay of the land. It makes you realize that tiny Tai O is. 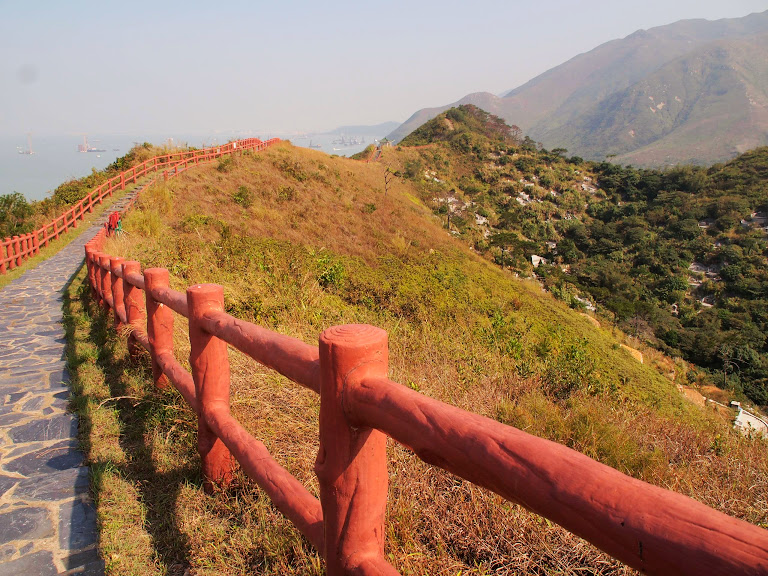 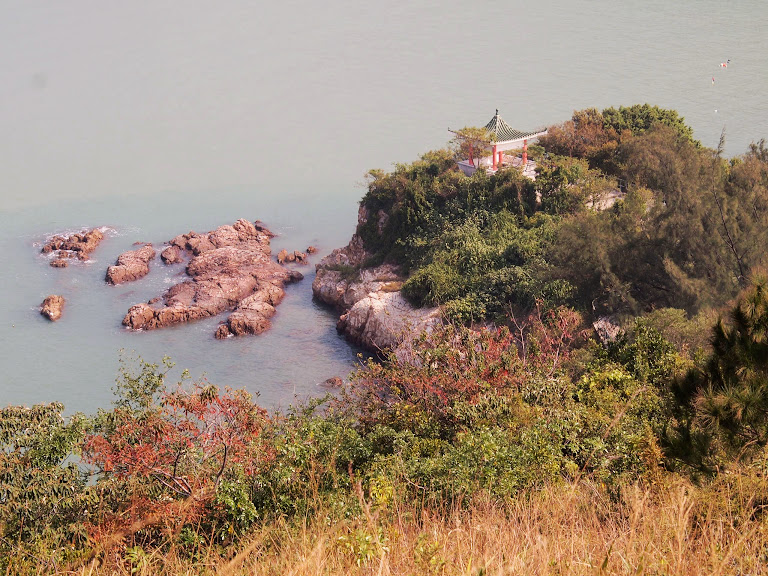 A small temple spotted from the hill top 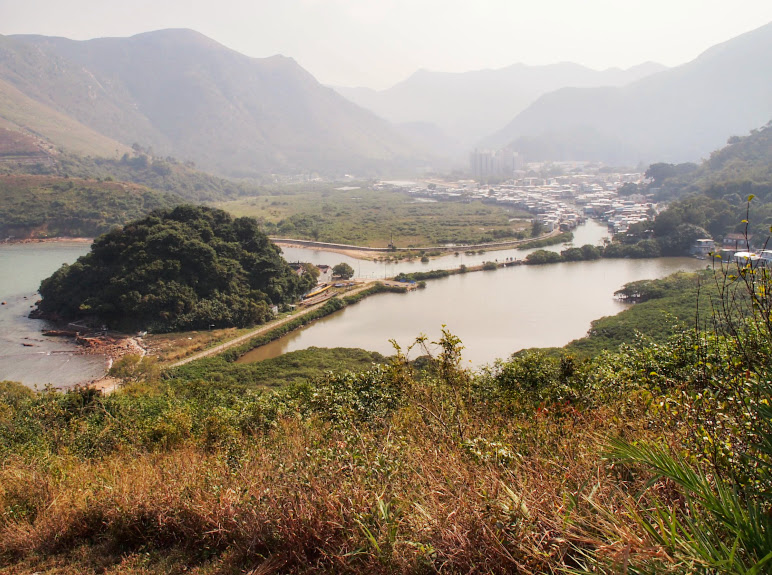 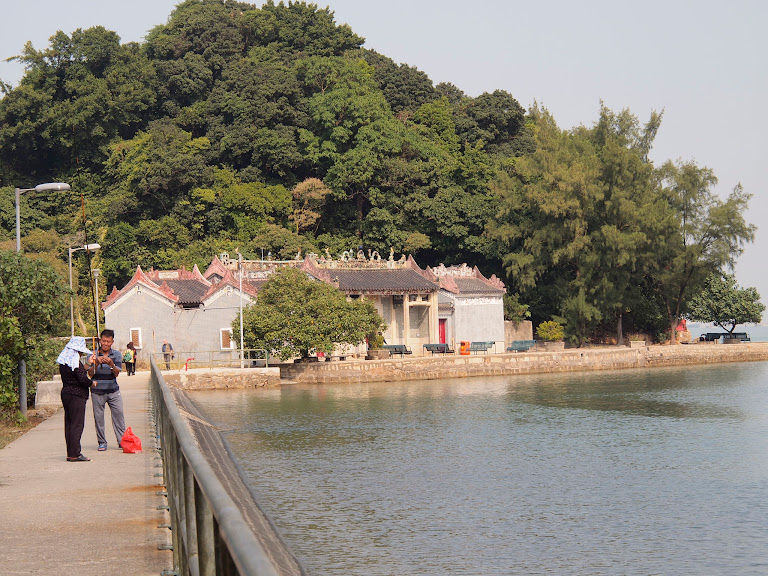 There were plenty of buses that can take you from Tai O to nearby villages on Lantau – like Ngong Ping and its Big Buddha (and nearest Starbucks and Indian food), or Pui O with its beaches and hiking trails (also an expat heaven aka where you can find the nearest western food).

Even though we both enjoyed our time in Tai O, I find it hard to describe what it is I actually liked about the village. It wasn’t the prettiest village, the food didn’t appeal to me (I don’t like Chinese food in general), and our mattress in the BnB was hard and lumpy.

But Tai O does have an appeal. Maybe it’s the sense of being transported to some undefined time period in Hong Kong’s past. Maybe part the appeal is its fragility, knowing that it will, inevitably, get swallowed up in Hong Kong’s rapid development.

It was a good place to recharge, to nose around, and be delightfully lost in the foreignness of a place – which was exactly what the kind of travel experience we were looking for. 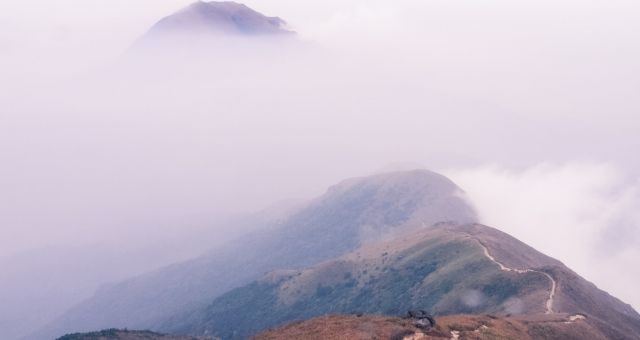 Memories of Hong Kong in Pictures