Memories of Hong Kong in Pictures

Similar to previous brain dumps (see brain dumps on Fez and Korea) , the following is a series of unrelated snippets of highlights, tidbits, and memories from our visit to Hong Kong.

We couldn’t get over how intensely crowded and dense Central Hong Kong is. We stayed with an Airbnb host close to the airport who lives in one of those highrise apartment buildings.

From our bedroom window, we could see more identical high rise apartment buildings, containing no doubt identical apartments with narrow hallways and cramped living space. I grew up in Jakarta, which is one of the most populated cities in the world. I’m used to crowds but this was something else.

I find it hard to imagine living in one of these identical apartment buildings. In a weird way, surrounded by hundreds of others, I think it would make me feel alone and invisible. 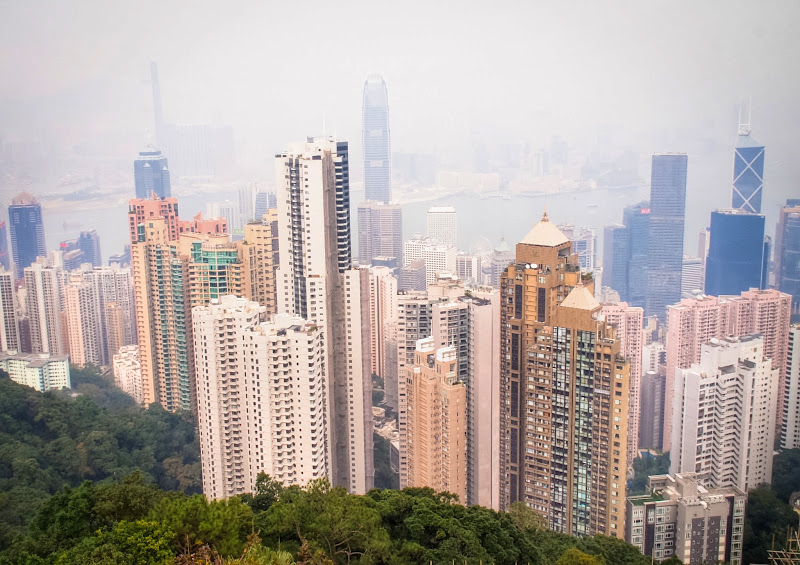 I have to admit that I knew very little about Umbrella Revolution that was going on in Hong Kong. I remember reading something about conflicts between police and protesters awhile back, about the encampments and roadblocks set up in major areas of Hong Kong.

I knew China was involved. But that was pretty much it.

Even though we spent most of our stay in Tai O (READ: Exploring Hong Kong’s Laidback Side), a small traditional village in Lantau Island, we spent our last day exploring the sights of the mainland.

It happened to be the day that the police was to clear the protesters and their camps on Causeway Bay in Central Hong Kong. Our Airbnb host warned us that there might be complications and advised us to steer clear.

Well, that turned out that this was an impossible advise. Causeway Bay is a major artery dab smacked in the center of things, under the shadow of major skyscrapers. It was impossible to avoid even if we had known where it was.

Without intending to, we soon found ourselves beyond the roadblocks, passing remnants of camps, temporary communal areas, and even a library. Hundreds of people were around us: protesters, spectators, and the police.

Instead of chaos, we found eery quietness. People were sitting on the streets staring at nothing, tapping on their phones, or napping. While spectators like ourselves walked among strewn paper plates and pizza boxes, cardboard bins filled with personal items, and half standing tents. Torn banners hung from bridges overhead and highway dividers.

Despite slogans of “We will be back” painted on banners on the walls, the atmosphere smelled of defeat and resignation. It was all quite depressing and I didn’t know what to think. 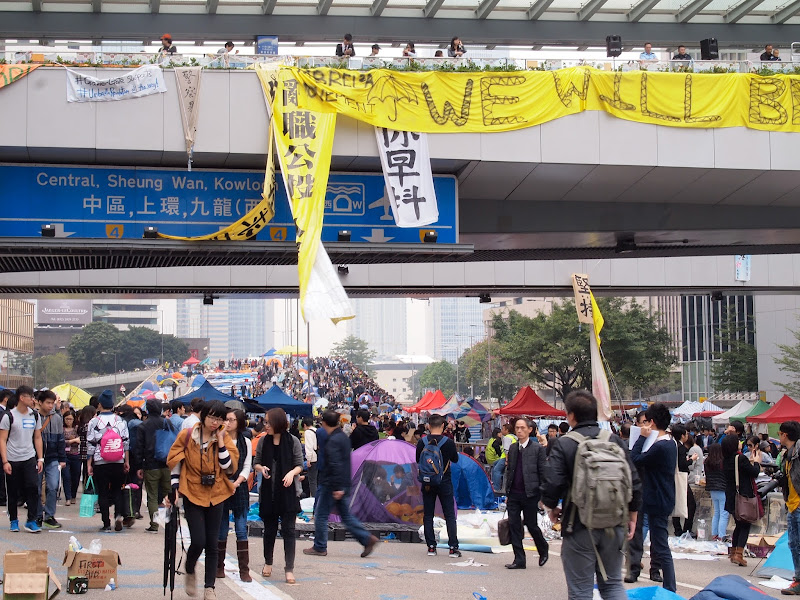 The last day of Umbrella Revolution in Hong Kong

A 30 minutes bus ride away from where we were staying is Pui O, a popular beach destination among Hong Kong mainlanders. Despite its popularity, it was completely devoid of people when we were there.

It had a long stretch of yellow sandy beach with a campsite right next to it. What a view to wake up to. It made me wish we were camping instead.

Its population seems to consist of mainly British expats, their dogs, and water buffaloes. They looked quite menacing with their curved, sharp horns and we gave them a wide berth whenever we passed one. The buffaloes. Not the Brits.

We came to Pui O expecting to find a nice place to have dinner – you know, it being a beach town and all. But nothing looked remotely promising.

Besides, everything was closed or closing anyway. We walked into a restaurant with tables outside and people playing cards but our request for a menu was met with blank stares. Turned out, it was not a restaurant. It was someone’s front porch.

The only thing that was open was a tapas bar that seemed to be popular among the local British expats. We had pizza (it was ok). And beer (it was warm). 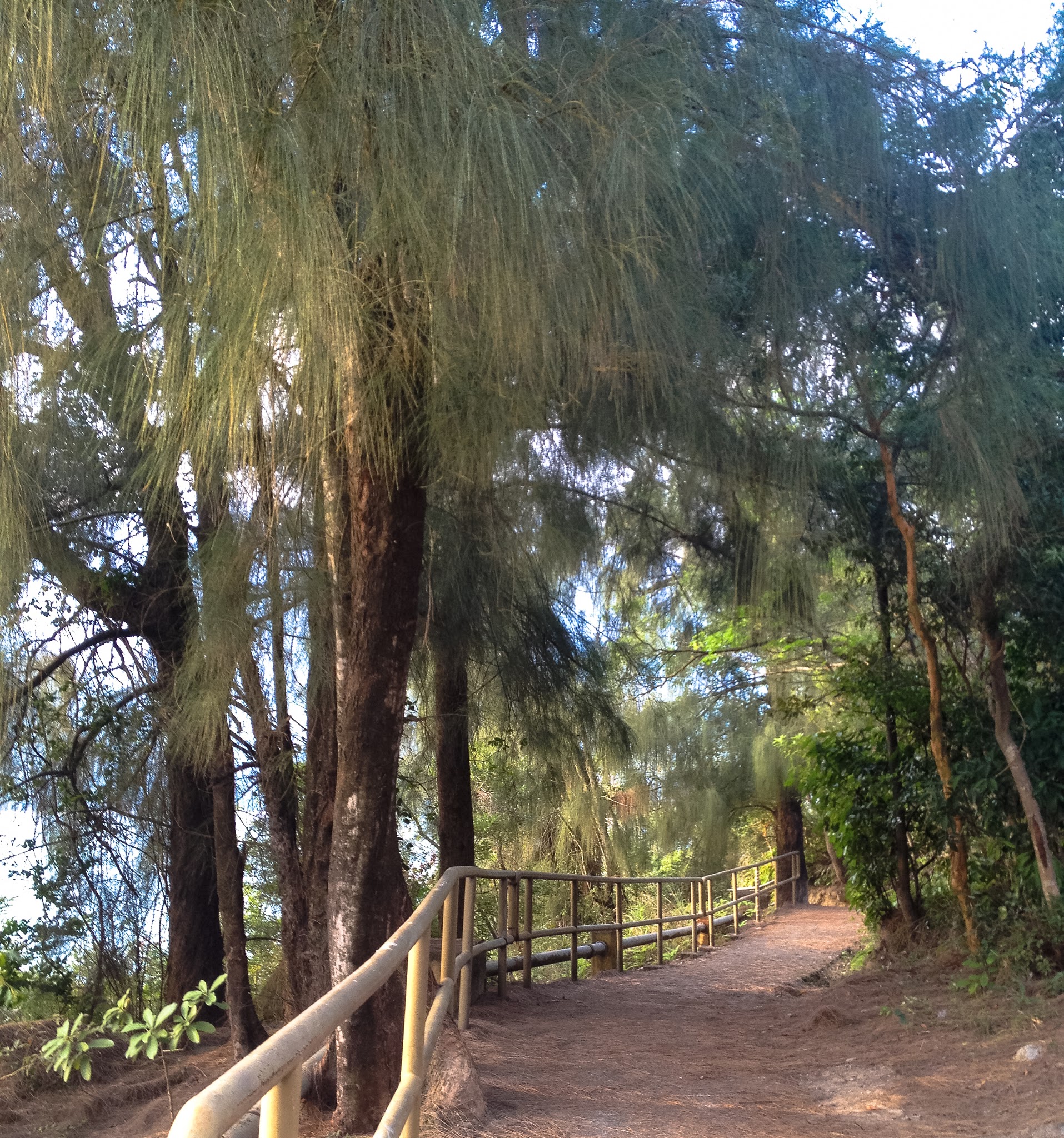 A peaceful trail near Pui O 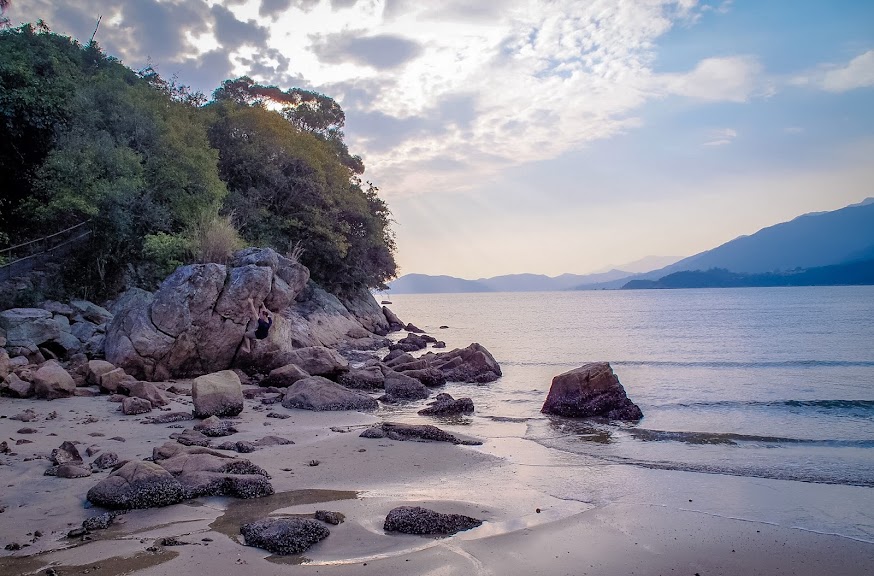 The hike up to Lantau Peak is one of the most popular things to do in Lantau. It’s 2 miles long and promises a vast view all the way to Hong Kong’s iconic skyscrapers on a clear day.

We took a day trip from Pui O to the manufactured village of Ngong Ping where the trailhead was. Of course it had to be raining. And foggy. It was bloody miserable up the trail.

It was pure stubbornness that got me up the trail. That and the fact that I was assured that no, there are no leeches on the trail (after Sri Lanka I’m a little wary of wet, shrubby trails). 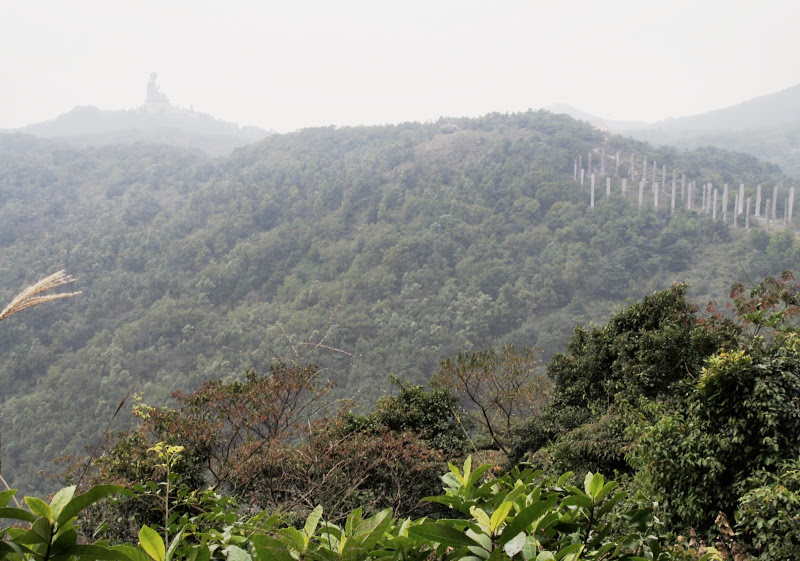 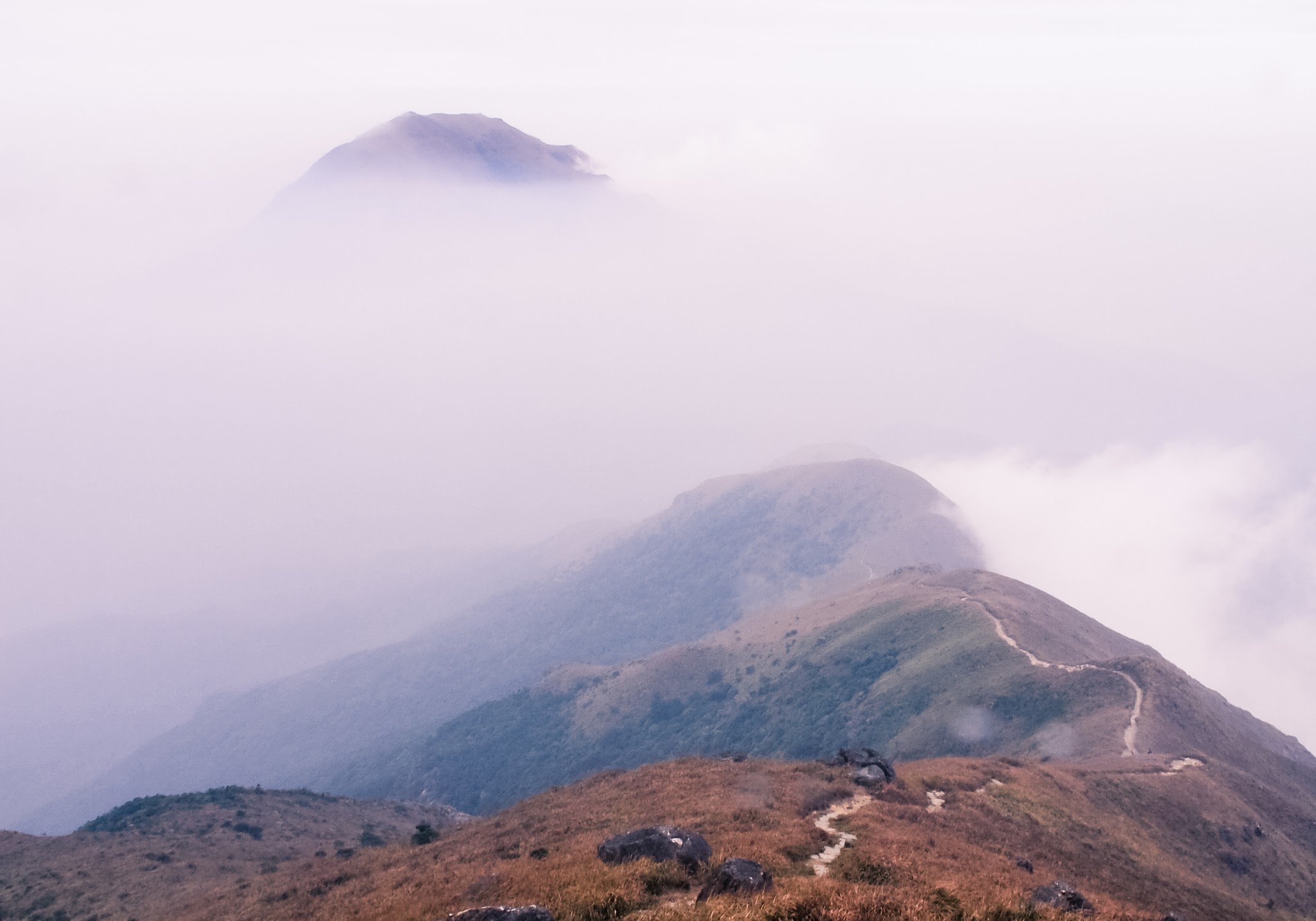 Sunrise Peak seen from Lantau Peak on a cloudy day

I stayed for an approximately 45 seconds at the peak before the wind and the drizzle drove me away.

Despite the shitty weather, our visit ended on a high note when we stumbled upon an Indian restaurant and a Starbucks in the village. 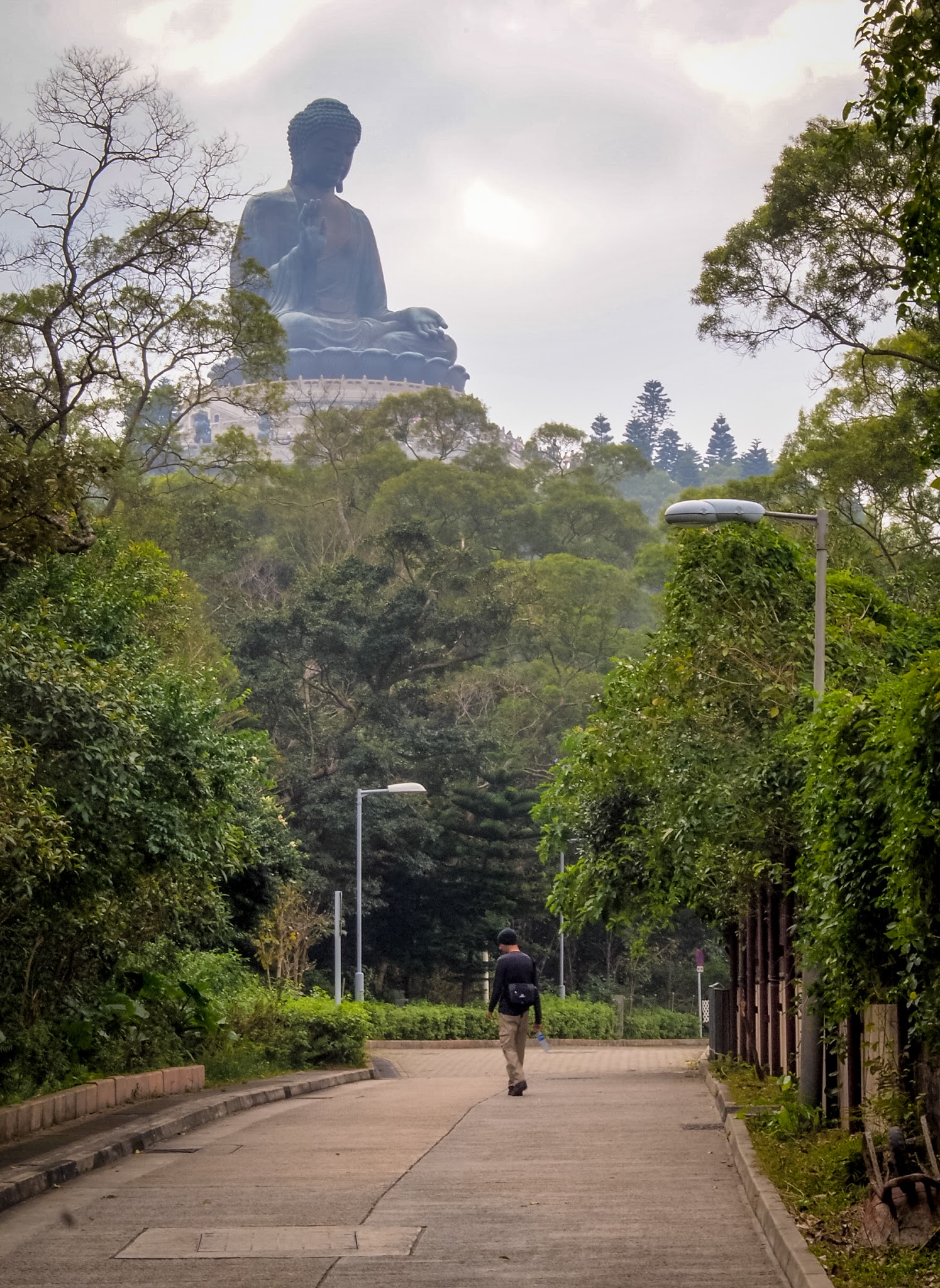 —
Thanks for reading. Have you been to Hong Kong? What are your impressions? 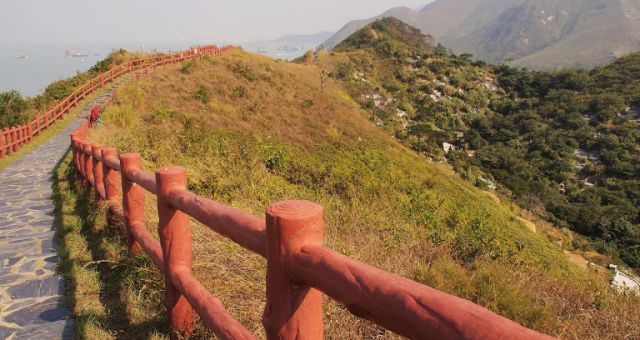