Northern Spain has always been my favorite part of Spain. On our last trip to Spain, we explored the Pyrenees mountain range that forms the border of Spain and France. In particular, the beautiful Ordesa Valley in Ordesa y Mount Perdido National Park. As someone who’s done a lot of hiking, this region still managed to blow our mind. Consider our high expectation met!

Home to the highest limestone massif in Europe, Ordesa y Monte Perdido is one of the most spectacular National Parks of Europe. It also happens to be the oldest protected area in Spain. The main feature of the park is the Ordesa Valley, also known as the Grand Canyon of Europe. This narrow and forested valley is flanked by sheer cliffs up to 3000ft! Calling it the Grand Canyon of Europe might be a stretch, but it is quite a spectacular sight nonetheless. 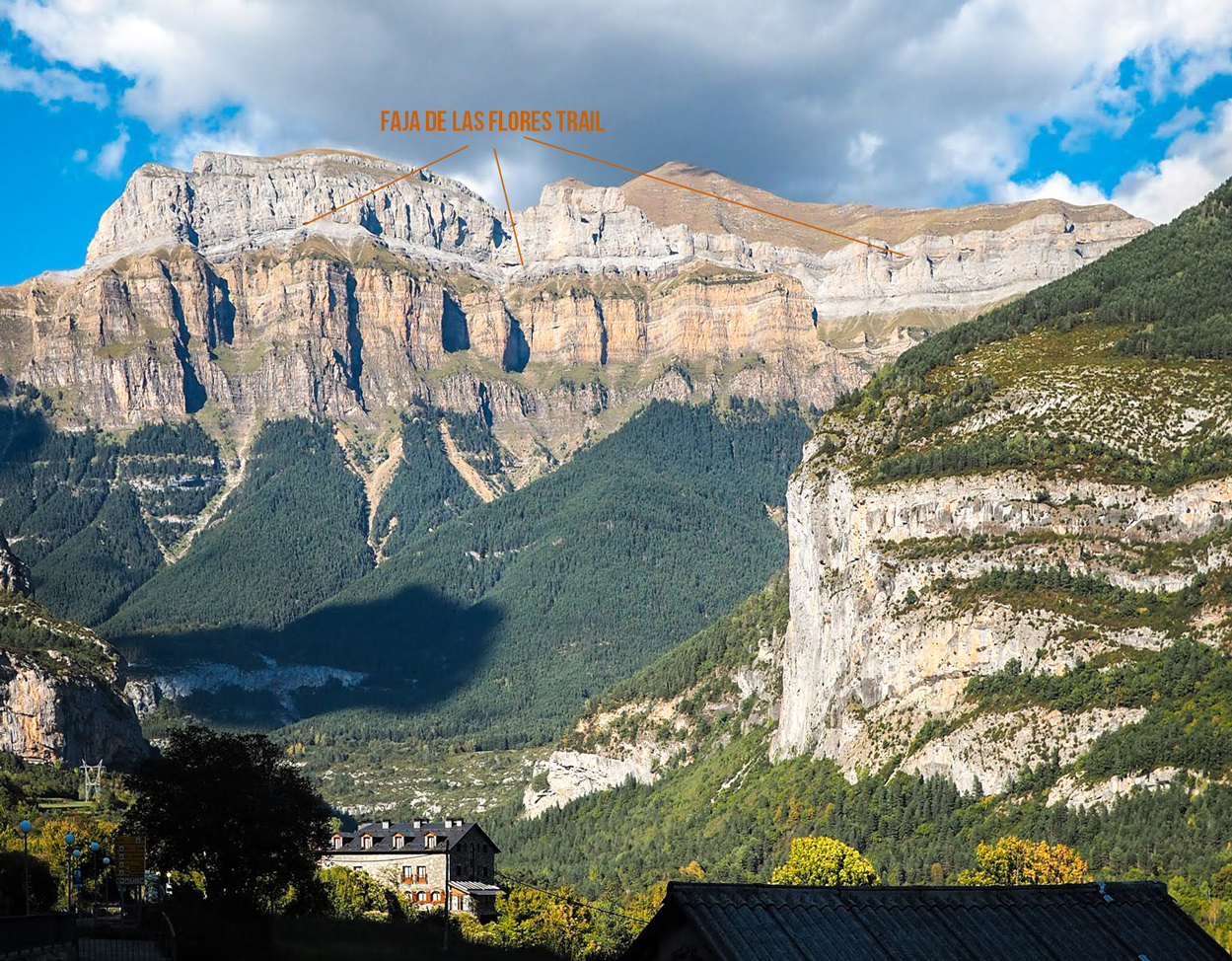 Fee: None
Distance: 17 km and 1150m elevation gain
Time: All day
Sun exposure: Yes
Loop: Yes (if you choose to)
Gear: There’s a section on the map called “Clavijas de Cotatuero”, if you go through this section you might want to bring a harness (we did). Some people went through this short, 2-min, section without securing themselves, so yes it can be done. But we were glad we had harnesses. You can rent them from Intersport in Broto.
Trail map: We recommend downloading maps.me.

Faja de Las Flores is one of Ordesa National Park’s best hiking trails and yet is one that sees relatively few hikers. Why would that be? Because it’s long and it’s highly exposed.

This high level walk traverses the northern cliffs of Ordesa Valley, providing bird’s eye view of the valley floor and the surrounding peaks. The “faja” means “girdle” or “sash” and refers to the natural in-cut on the cliff face made of weaker sedimentary layer. The hike follows this natural in-cut, located thousands of feet above the valley floor. The trail was barely 2 feet wide in places. Considering the sheer drop 1km straight to the valley floor on one side, I need to stress that this is not the trail for those afraid of heights.

In some sections you’re required to step on iron pegs hammered onto the cliff wall. Imagine the the exposure! For us of course, this was its main attraction. Nothing like a little exposure to turn a hike into an adventure!

The trailhead starts in the main parking lot of Ordesa National Park, Spain. The nearest town is Torla, located at the base of the Pyrenees mountain range.

In the summer the road to Ordesa National Park is closed off to private vehicles but you can take a bus from Torla. At any other time you can drive directly to the parking lot. There’s no entrance fee to the park. The trail to Faja de Las Flores is clearly marked on maps.me 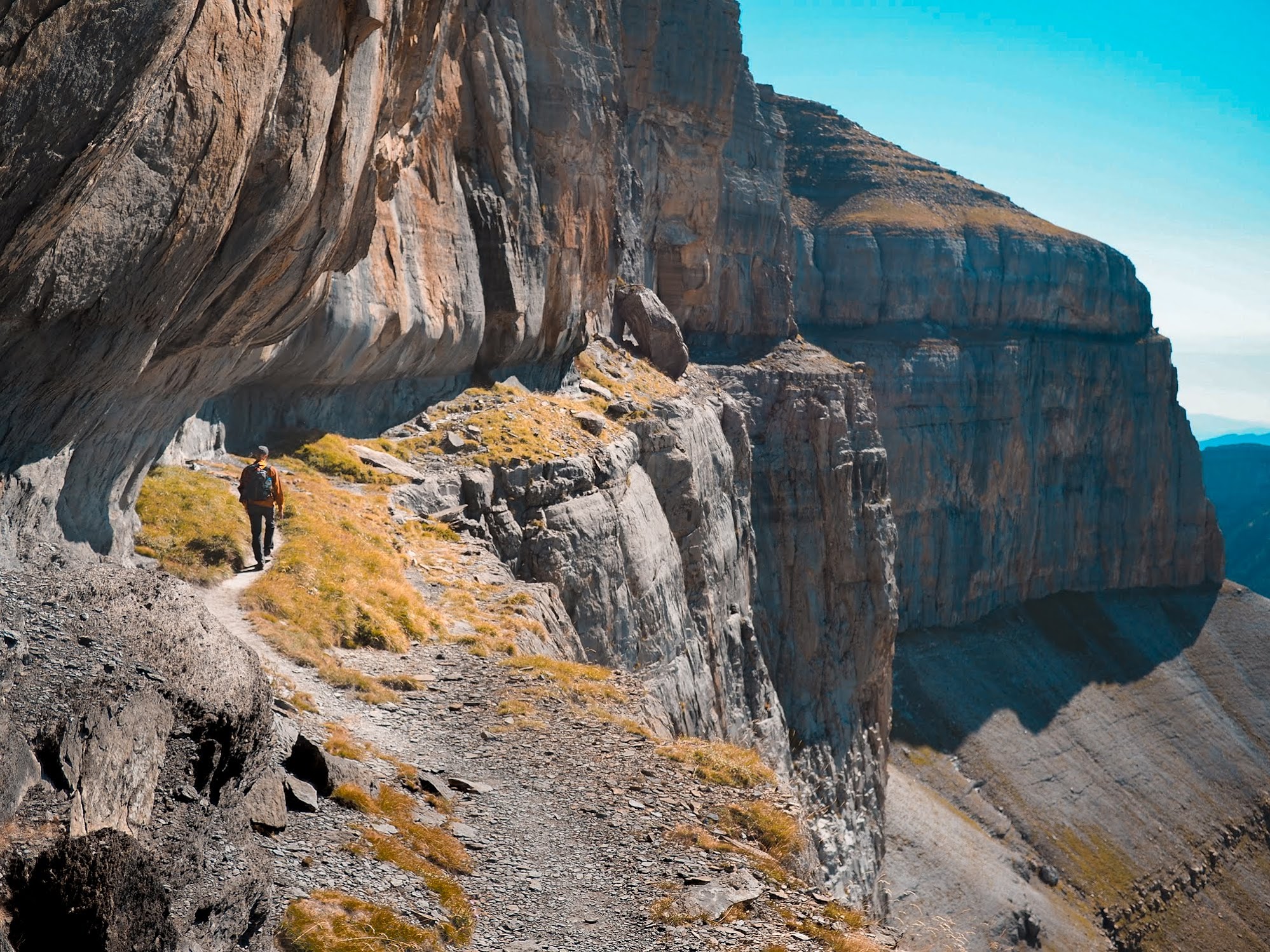 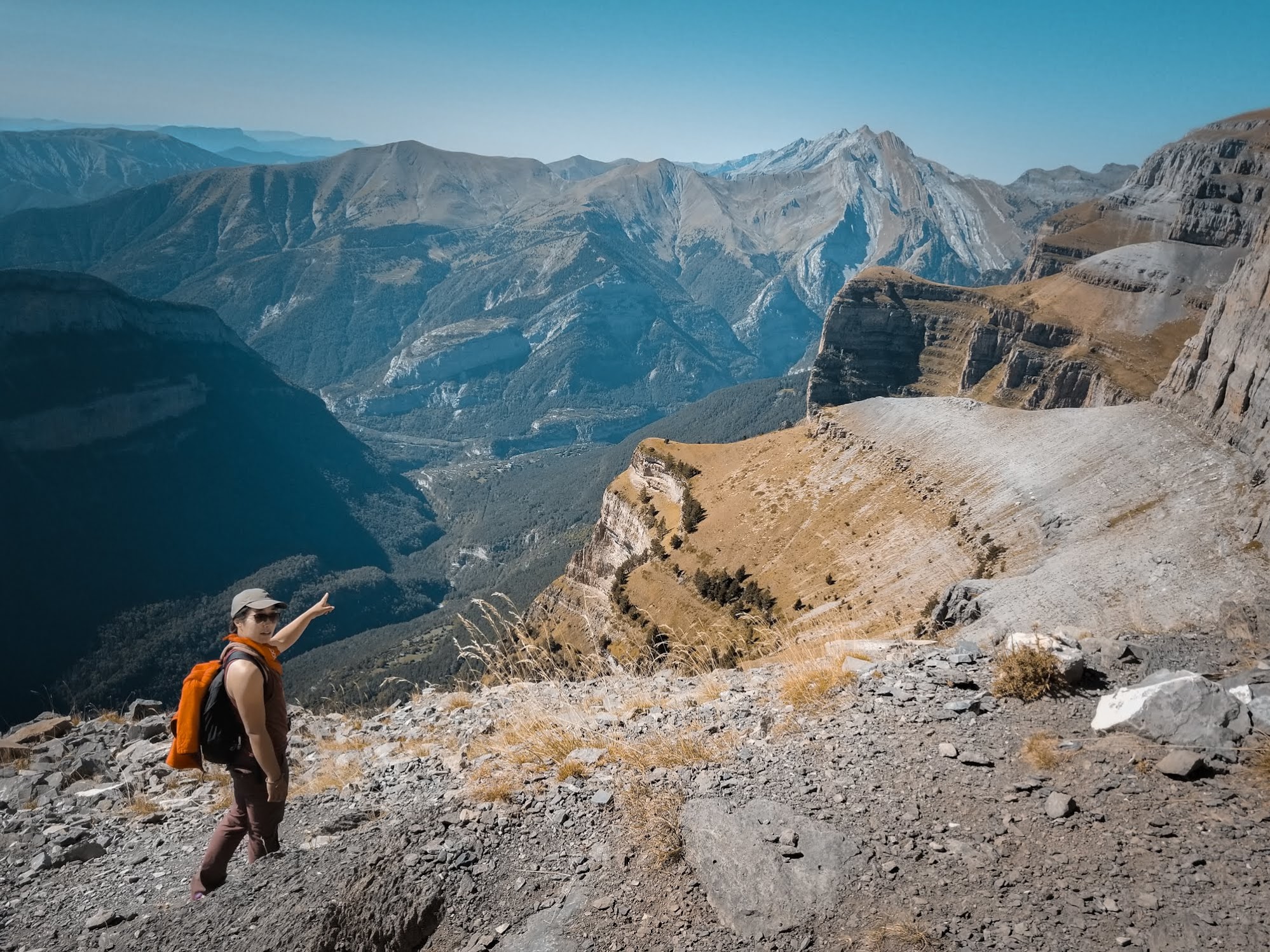 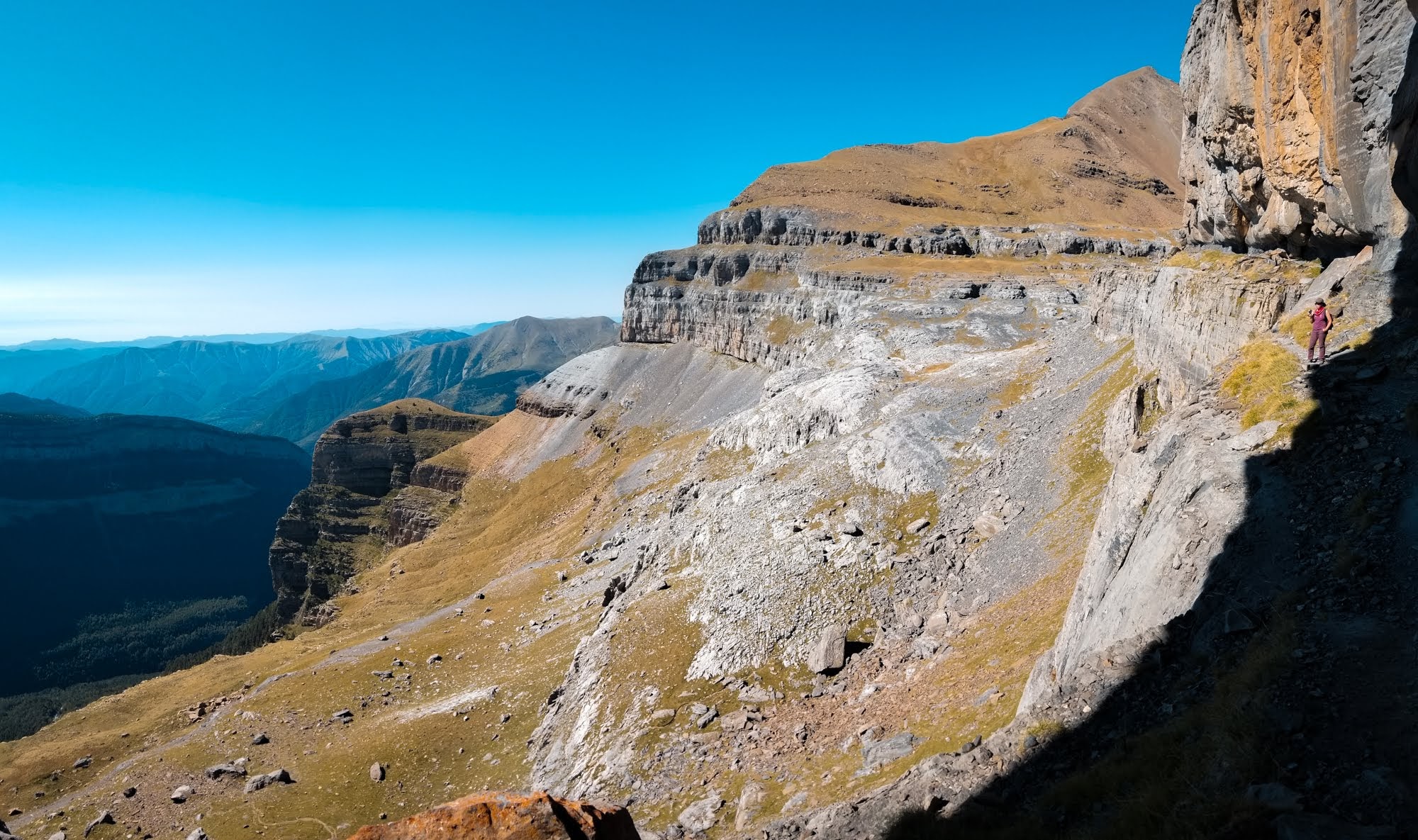 The in-cut portion of the Faja de Las Flores

When we started out from the park’s parking lot, the morning’s chill hasn’t quite left. Despite it, we were soon sweating and taking layers off. Looking at the hike’s elevation profile, it’s basically a table: steep in the beginning and end, flat in the middle. The first section climbs for awhile, getting you to 1000 m in elevation as humanely as possible. Some sections required scrambling with our hands.

The trails on maps.me criss cross confusingly but we basically kept to the most worn trail. Based on some online post, we expected to find a short via ferrata section on the approach, but somehow we must have circumvented it. 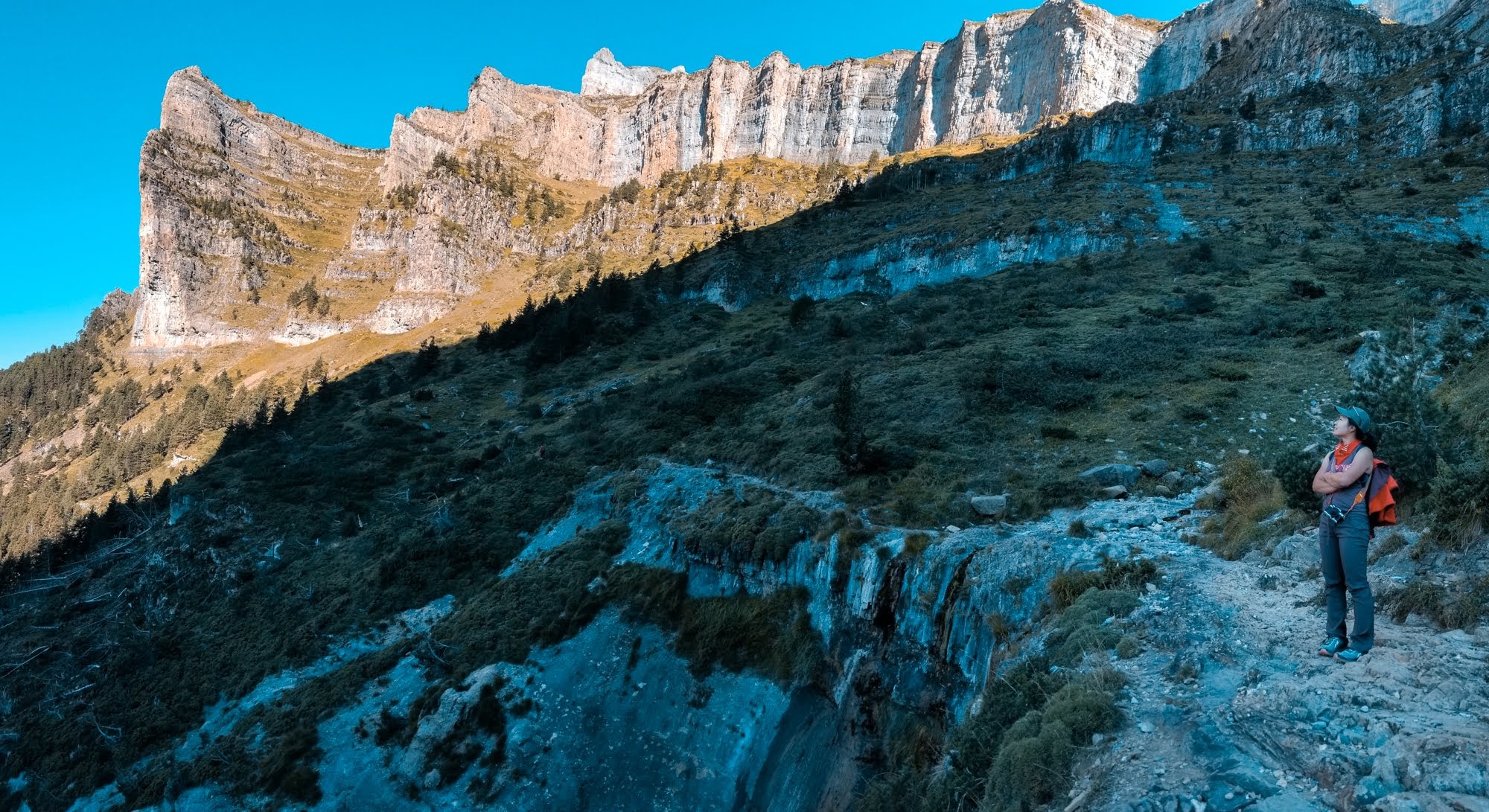 On the way up Faja de Las Flores 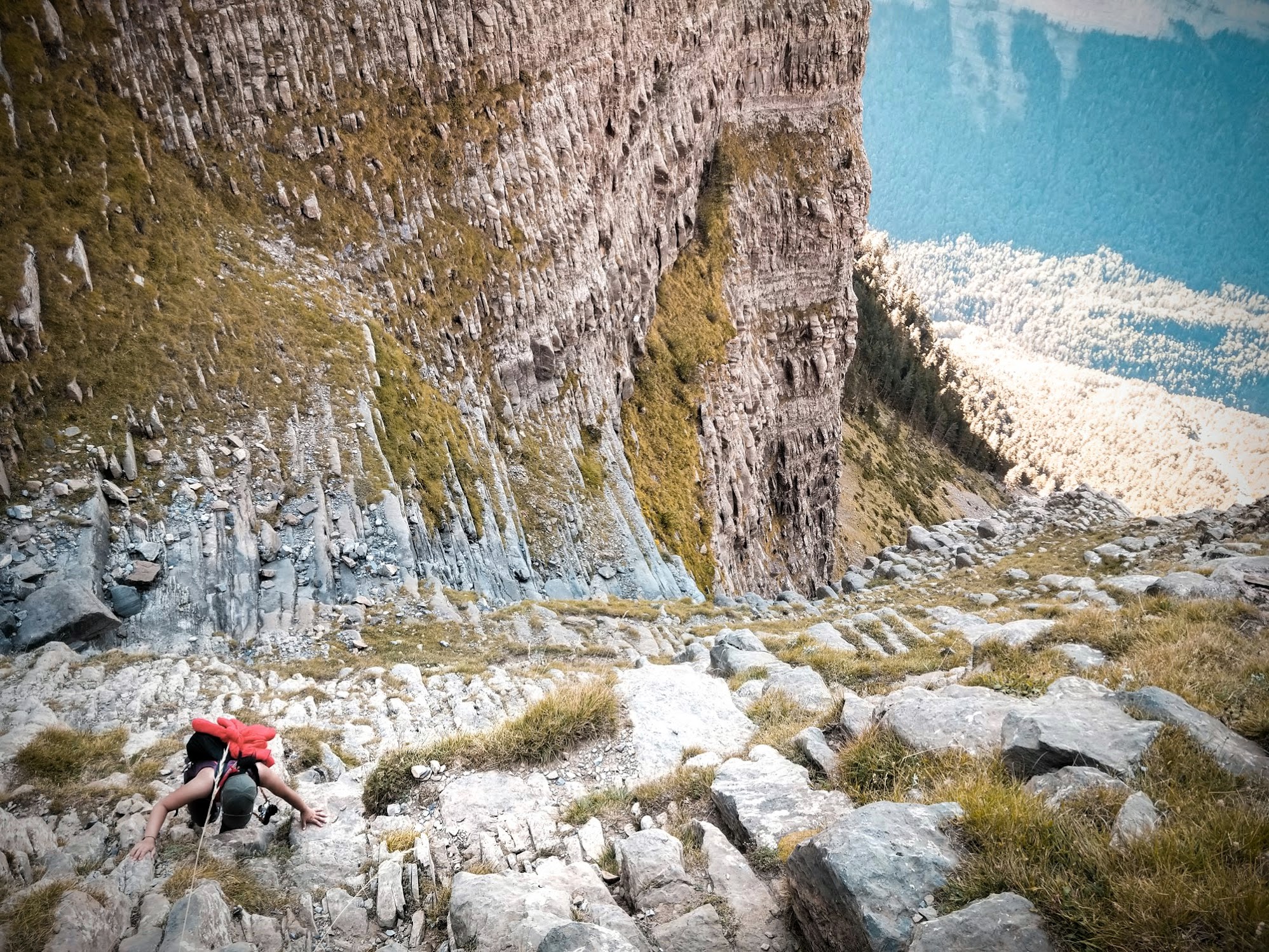 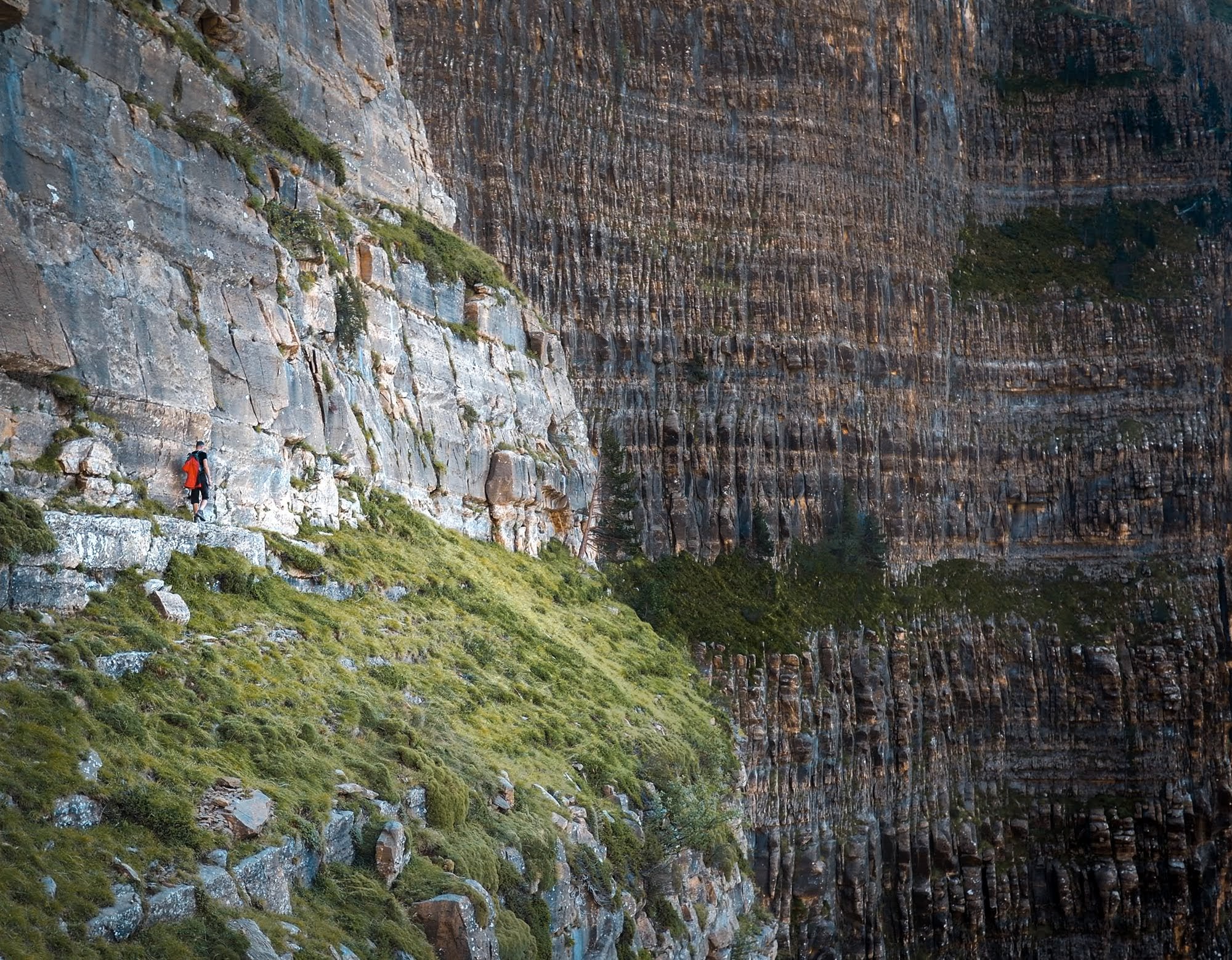 had to call the guy back and pointed him to the right trail because he was obviously lost. 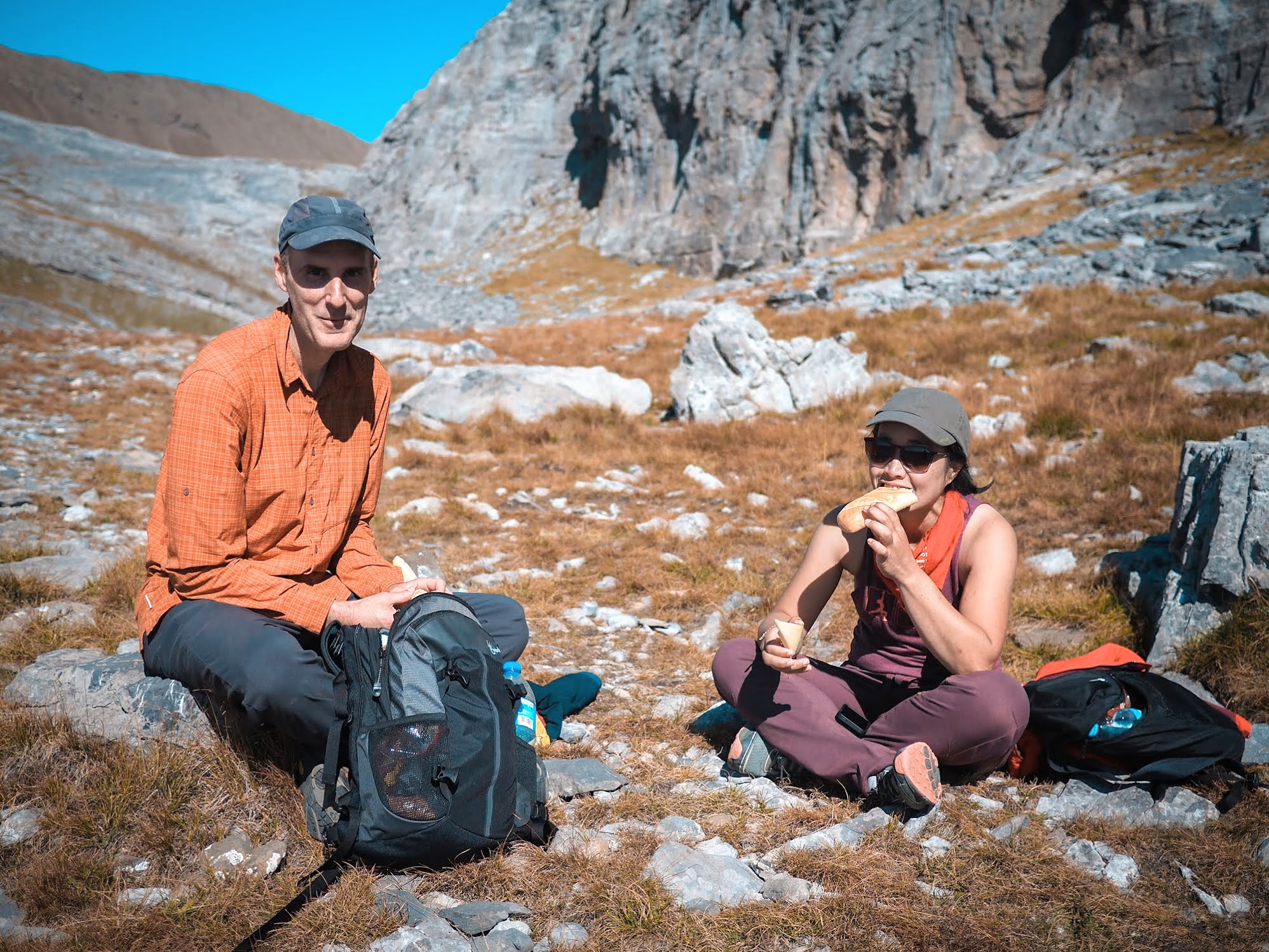 Soon we were close enough to clearly see trail on the escarpment. The “faja” part of the trail was much, much higher on the cliff face than we originally expected. I was giddy with excitement. This was going to be fun!

Once we reached the traversing trail we slowed down a bit to enjoy the view. Also because you really don’t want to stumble. Even though the trail was narrow and exposed, it really wasn’t so bad if you keep looking straight. It’s when you look down to the valley floor, 3000ft below that the reality gets you. I couldn’t believe how high up we were. 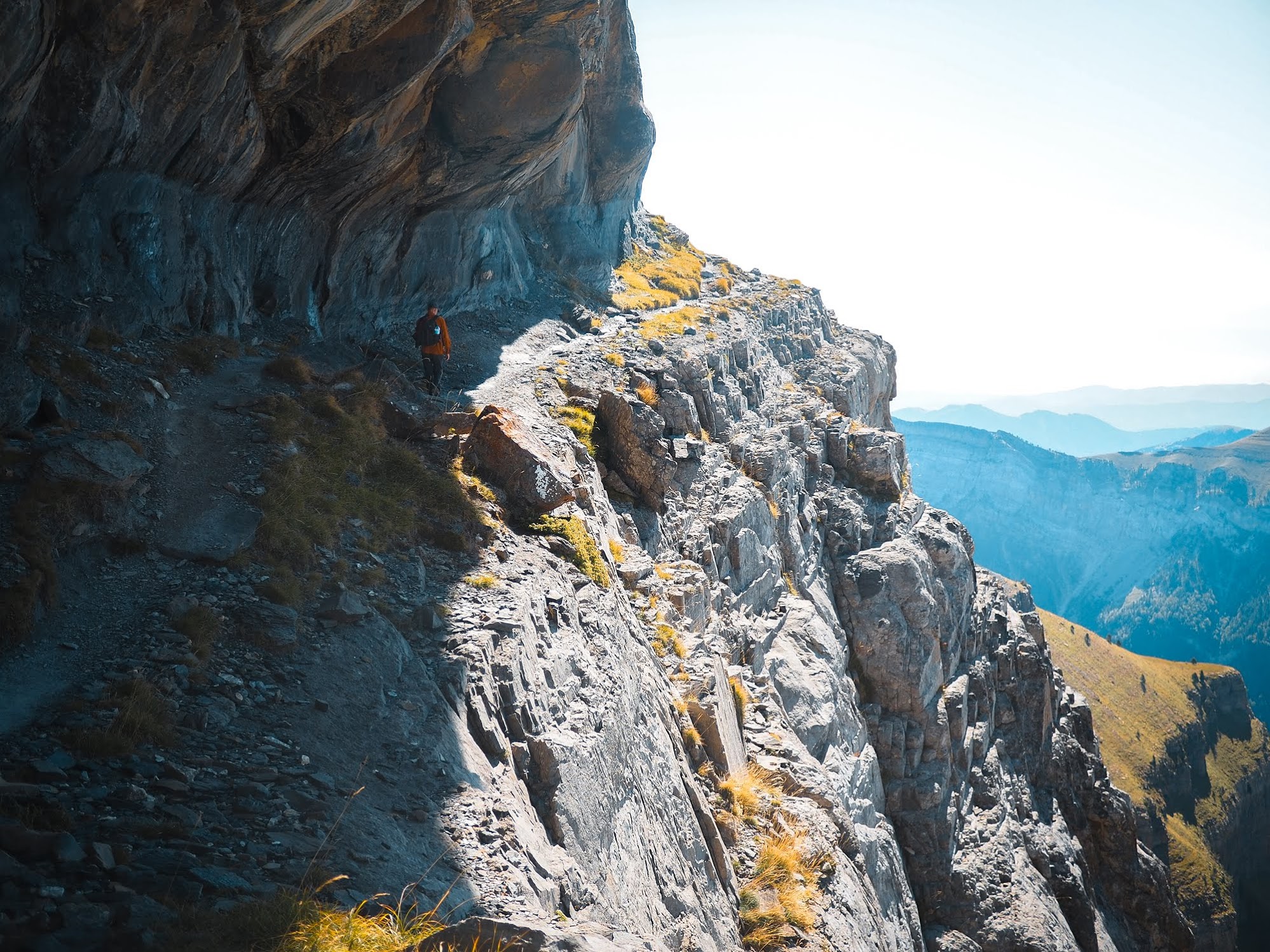 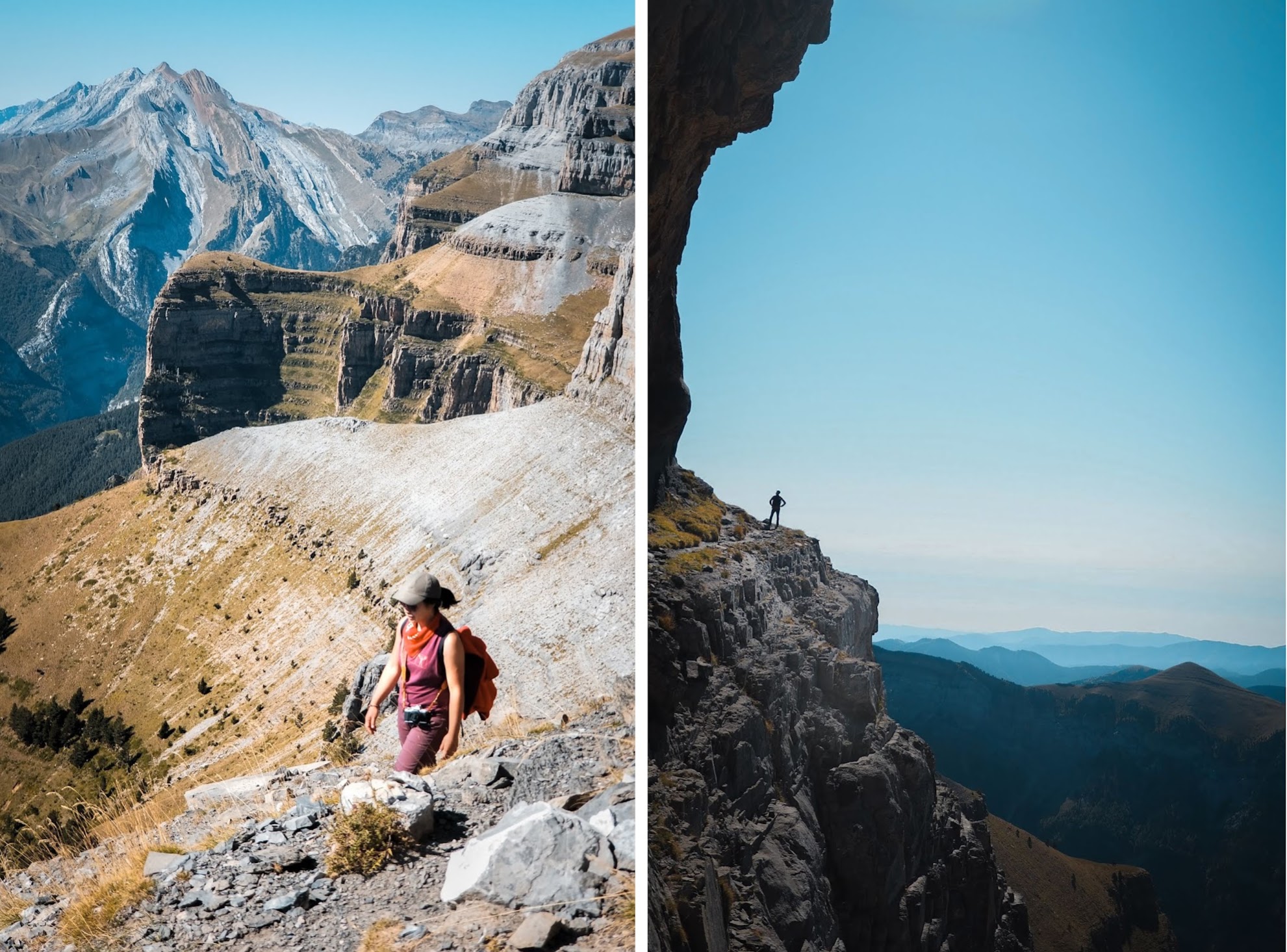 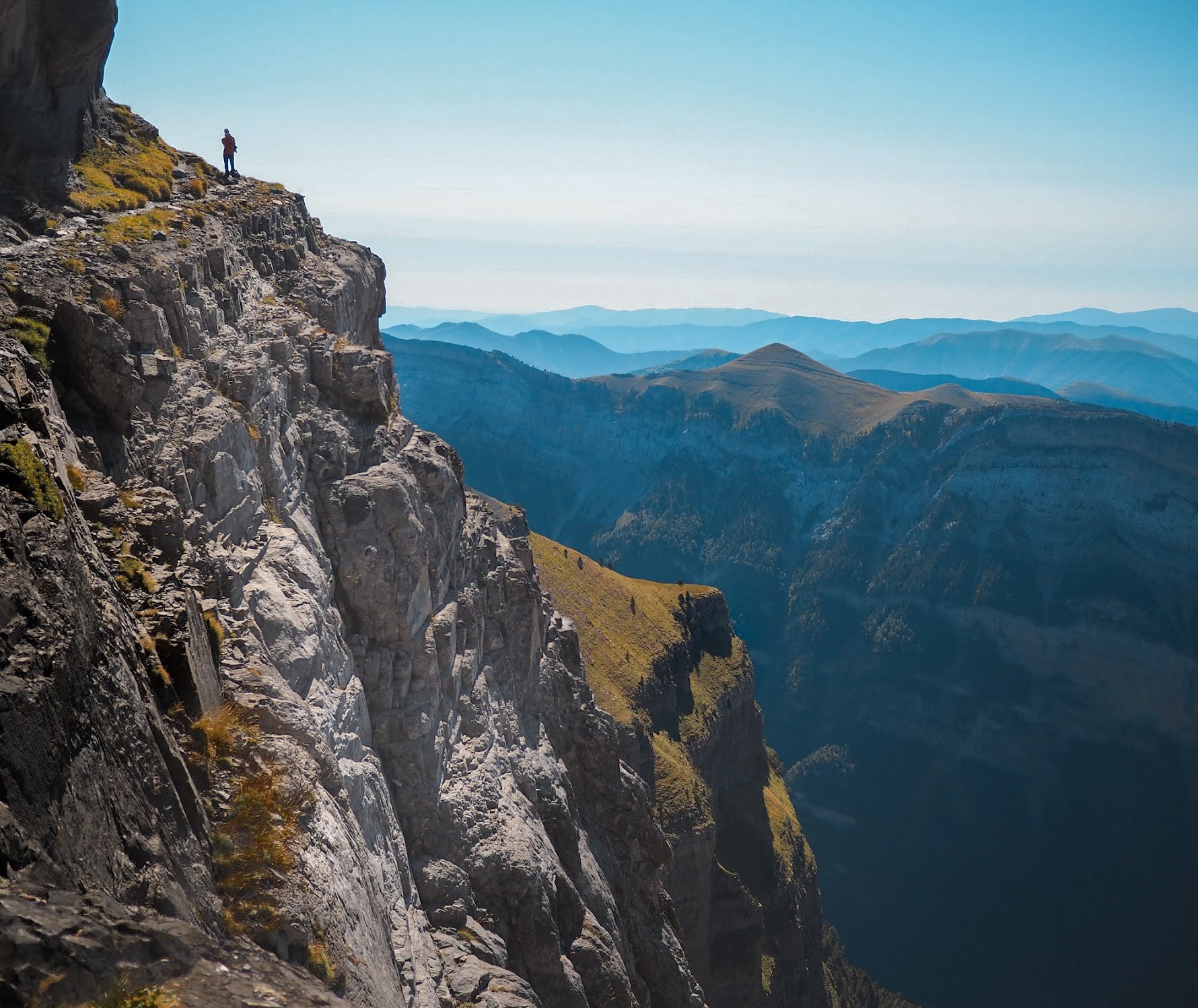 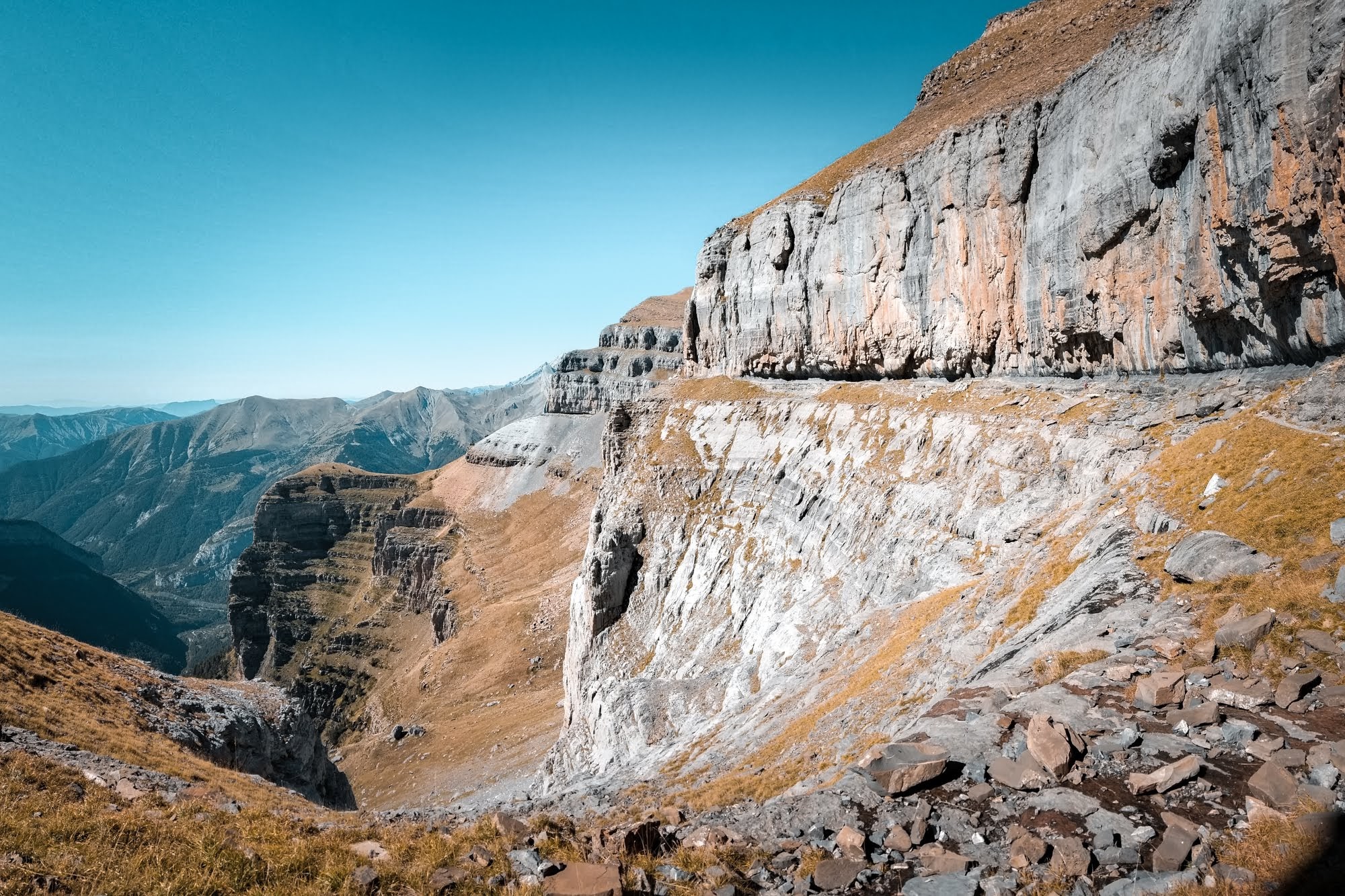 All good things must come to an end. Maps.me indicated that there was a shortcut that can get us down faster. Jack could never say no to an opportunity to go off-trail scrambling, so roughly where maps.me indicated – we turned off the trail and scrambled down a rocky gully. We reached a flat area where there’s a small waterfall and an inviting pool – a perfect place to have lunch and maybe even a swim. But we had a good momentum going so we decided to press on. 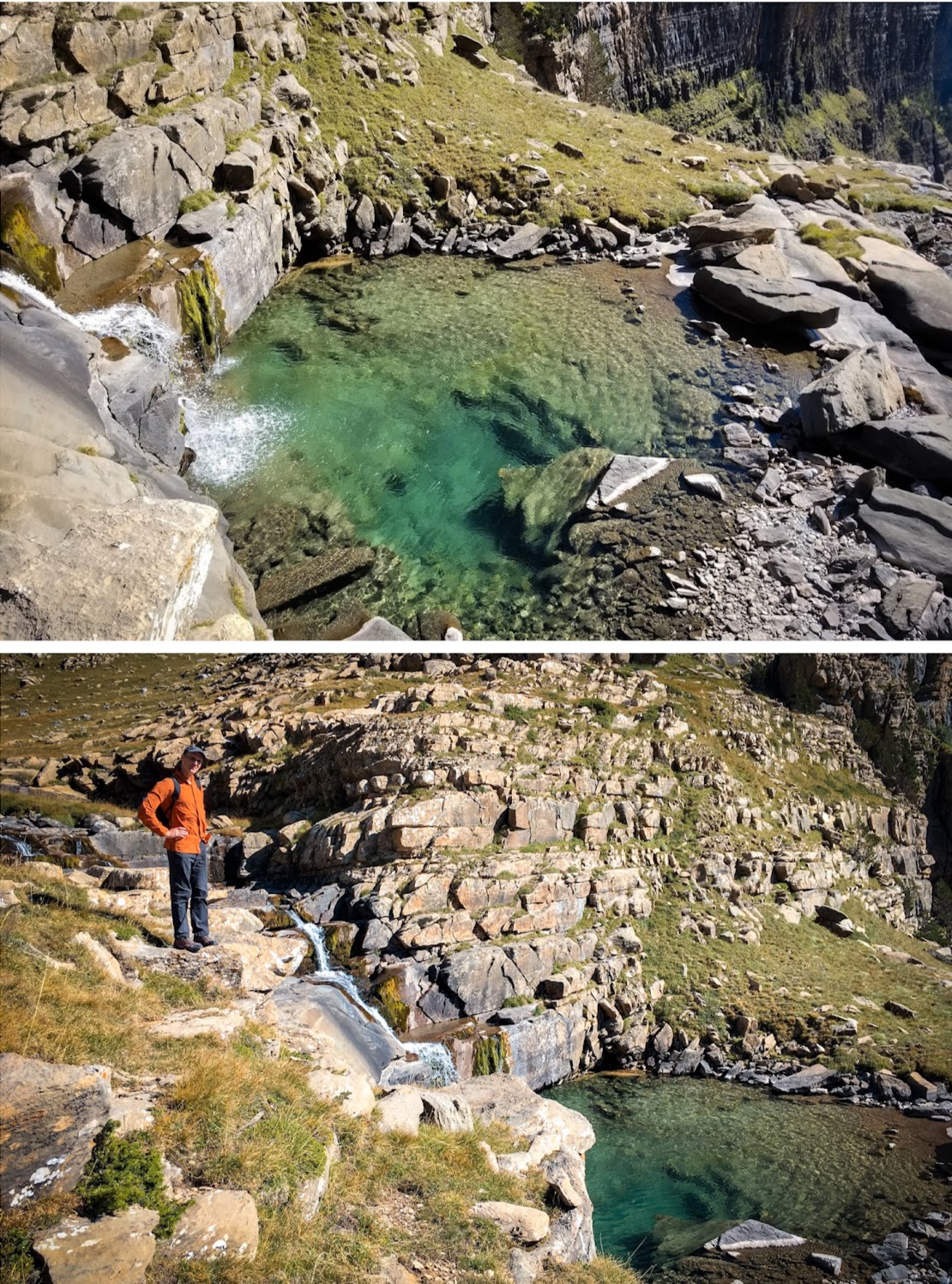 Doesn’t that look so inviting? 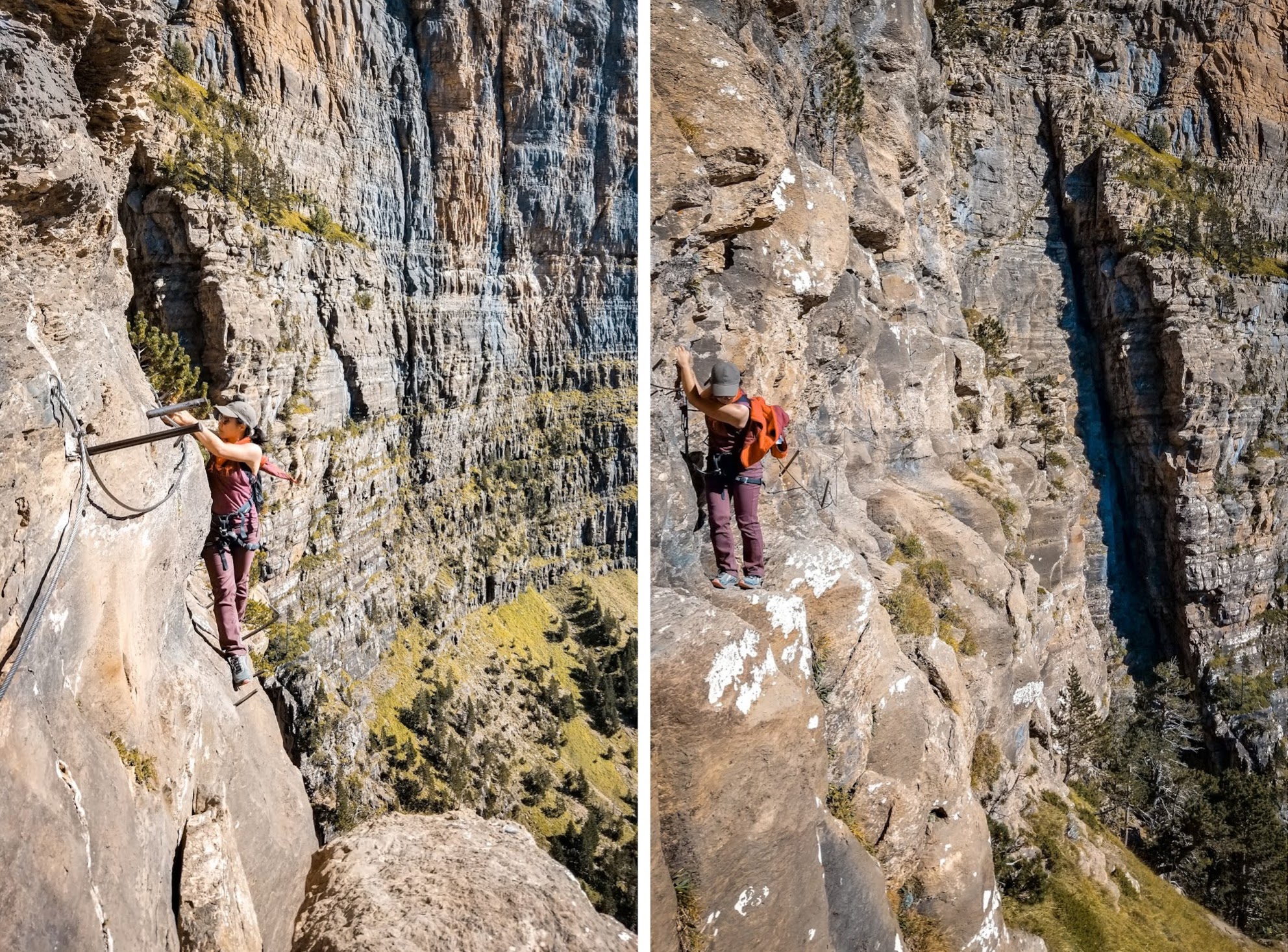 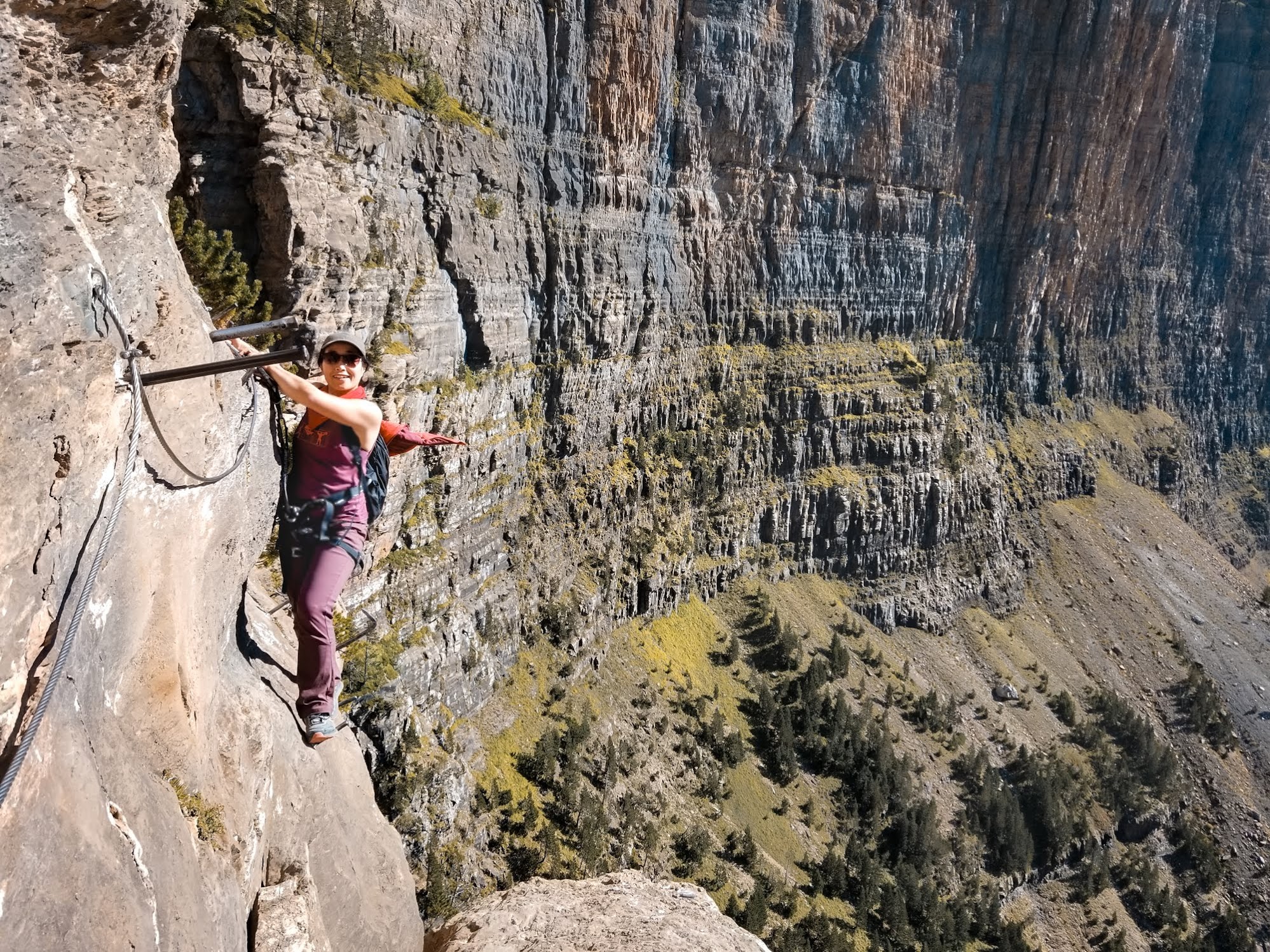 Shortly after we came to the short via ferrata section called “Clavijas de Cotatuero“. After scouting we decided to put on our harnesses. We brought them with us anyway, might as well put them to use. There was one move that was a little dodgy, so I’m glad I was tied to the hand cable.

Where to Stay For Ordesa and Monte Perdido National Park

A-135 is the main road that enters the Ordesa y Monte Perdido National Park. On the way to the entrance you’ll pass small villages any of which would make a great base during your stay in the Pyrenees. We opted for Casa Puyuelo, a small B&B in Sarvise, a tiny village (we’re talking like a handful of buildings here) 20-min drive from the trailhead. The landlady speaks only Spanish, but we managed to get by. Rooms start at $45 for double occupancy. It’s clean and comfortable. There are lots of books and maps on Ordesa National Park you can borrow – as a matter of fact, that was how we learned about Faja de Las Flores trail.

If you want to cut down your driving town even further Villa de Torla (rooms start $45) in Torla is a great choice to stay, especially when visiting in the summer. It’s one of the closest B&B to the park’s trailhead and it also has a swimming pool.

Broto is a bigger town and it offers more accommodation options. This is where we ended up every evening during our stay in the Pyrenees since it has the most number of restaurants. Broto also has grocery stores to stock up on trail snacks as well as a few outdoor stores. Casa Rural El Porton de Murillo in Broto offers great views with a large terrace and a pool. 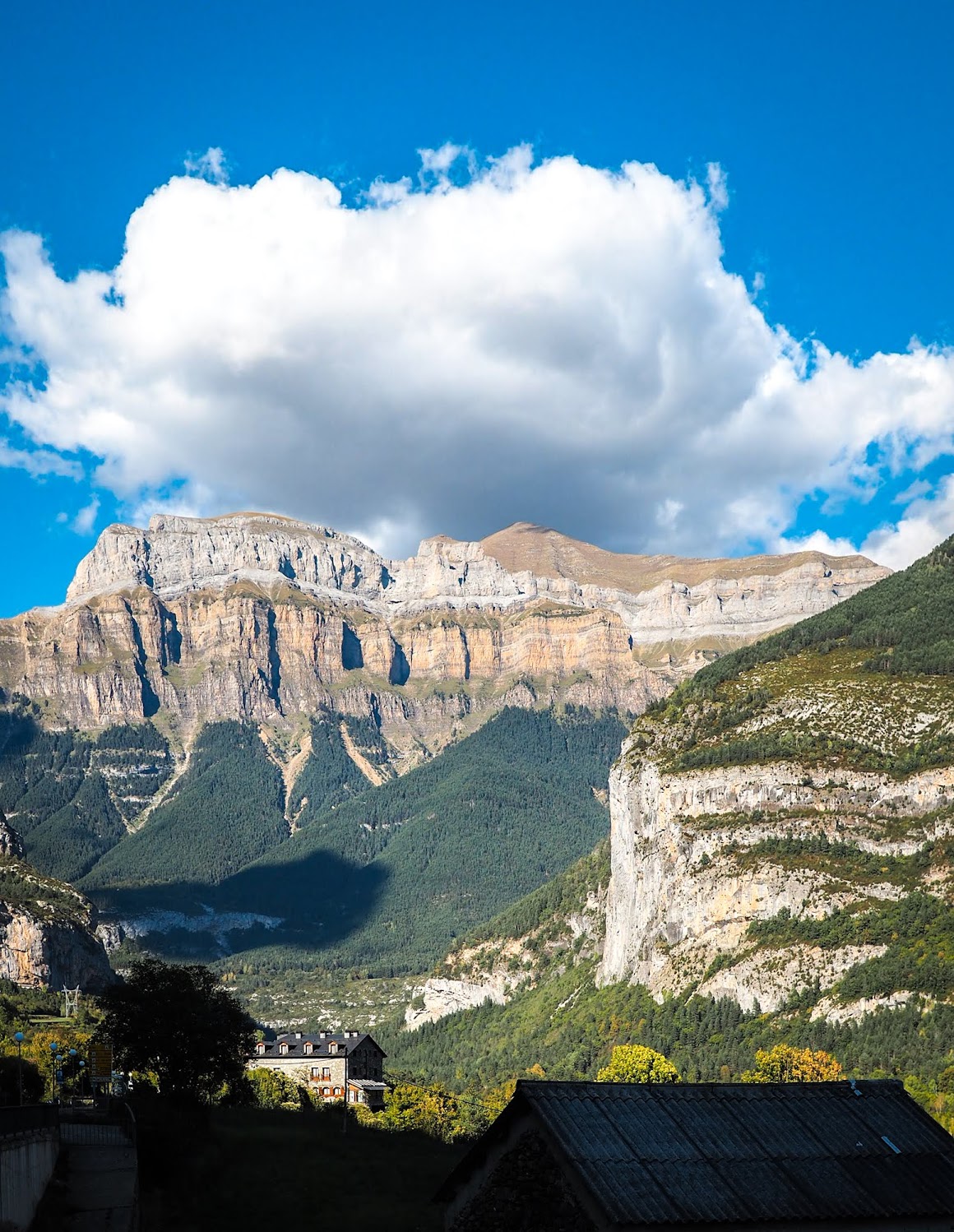 The cliffs above Ordesa Valley seen from Broto.

Other Day Hikes in Ordesa Valley

This hike shares the same start as Faja de Las Flores and is quite similar in elevation profile, but only goes to about halfway up the cliff face.

The mirador provides an expansive view into Ordesa Valley. It’s 1.5 mile one way. From the mirador you can walk along the south cliff face on Faja Felay trail.

Pro tip: Get the Cicerone’s Walks and Climbs in the Pyrenees for hikes in other parts of the Pyrenees, including multi-day ones.

—
I’ve been showing pictures from Ordesa to my hiking friends and they all said the same thing, “That’s in Spain?” I know right? Spain is so much more than Gaudi, tapas, and flamenco. Not that I don’t enjoy those quintessential Spanish things, but it’s nice to be able to know that when the cities gets too much, there’s always the Pyrenees.

Have you been to the Pyrenees in Spain? For another great hike I did in Northern Spain, check out Cares Gorge in Los Picos National Park. It’s pretty epic if you ask me. Or see all other great hikes. 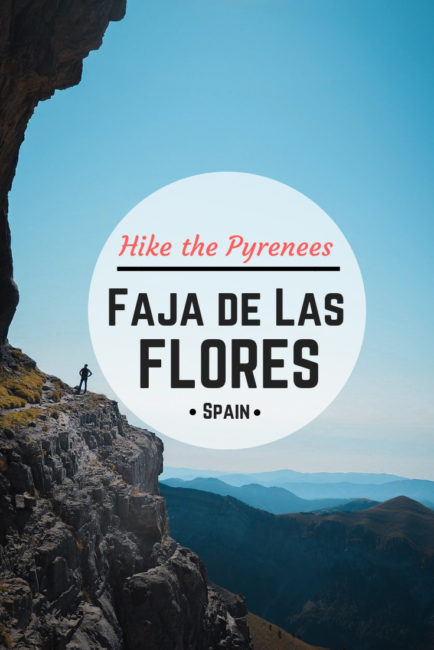 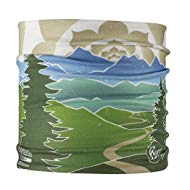 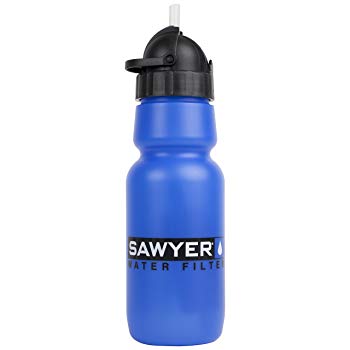 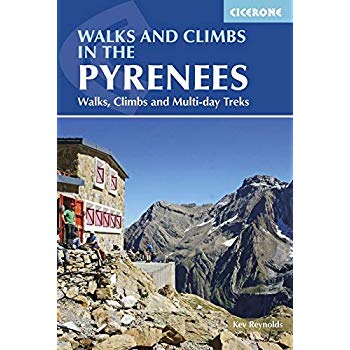