Darvaza Gas Crater in the Karakum desert is one of the main reasons to visit Turkmenistan. It’s one of the country’s most popular attractions. For a good reason. It’s spectacular to look at (especially at night), and its story how it came to be is quite unusual.

Darvaza Crater, also referred to as “The Gates of Hell”, or “Door to Hell”, or other similar “hellfire” variation is not a lava lake, but a site of industrial accident turned tourist attraction. If you think that’s a little odd… well, welcome to Turkmenistan. It’s just one of the many oddities you can find in this little known Central Asian country.

How to Visit Turkmenistan Gates of Hell 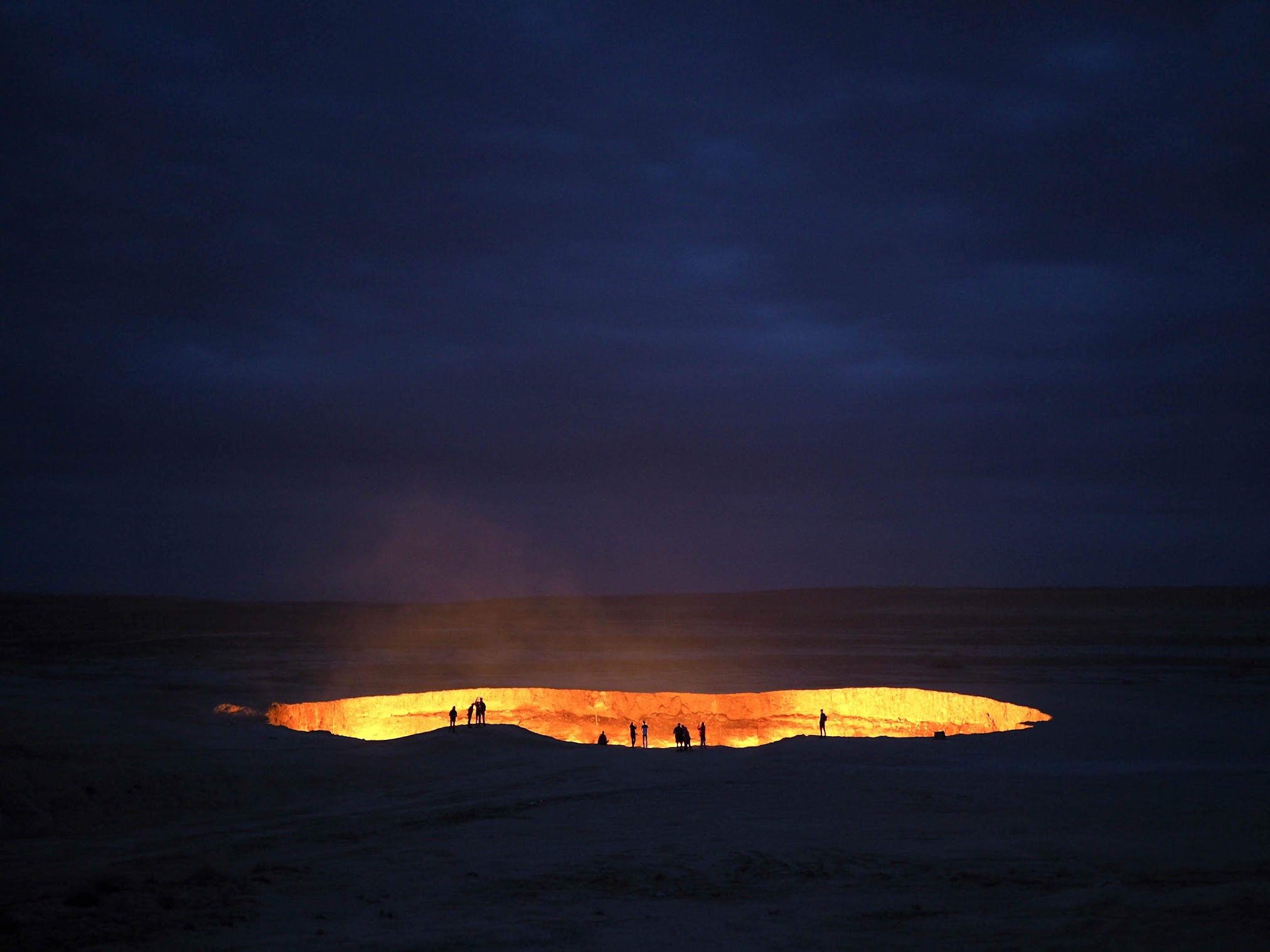 I visited Darvaza Crater as part of an 8 day tour of Turkmenistan (I used Travel Notoria). Foreigners are also not allowed to travel outside of Ashgabat, Turkmenistan without a guide, so you’ll need to contact a travel agency to arrange a guide/driver and a 4WD car. You’ll definitely need a 4WD car since the last 3 miles to Darvaza is driving on sand.

The crater is 4 hour driver from Ashgabat. Darvaza Crater is the most visited tourist spots in Turkmenistan and this was the only place where we ran into other tourists in 8 days in Turkmenistan.

Turkmenistan is one of the least visited countries in the world. The country was never in my radar until I saw a picture of a giant sinkhole on fire – The Gates of Hell – in Atlas Obscura. In a book filled with wonderful oddities from around the world, this large fiery crater in the ground definitely stands out.

Darvaza Gas Crater was “created” when a Soviet drilling rig caused an underground cavern to collapse, bringing the whole rig collapsing down into the crater. If that sounds bad enough, just wait… it gets better.

The collapse also caused a massive gas leak. Our tour guide mentioned that the leak caused the deaths of at least 2 shepherds who were camping nearby. To “fix” this, the same brilliant Soviet engineers decided to light the pit on fire, expecting the gas to burn off in a “few days”. Well.. here we are some 40-plus years later and I can confirm that it’s still burning.

Most visitors to Turkmenistan make a straight beeline to Darvaza Crater. It’s without a doubt Turkmenistan’s most visited attraction. One can even argue that it’s Turkmenistan’s only “tourist attraction” (the country is after all 70% desert). Despite that, weirdly enough, it’s never been featured on any tourist brochures. The site is totally undeveloped. It is literally a hole on fire in a desert. There are no hotels, no billboard with an arrow that says “Fiery pit, next exit!” Most locals are not even aware of its existence.

One might even suspect that the government is embarrassed of it. The current Turkmenistan president, Gurbanguly Berdimuhamedow, visited Darvaza Crater back in 2010. He reportedly thought that it was a “waste of gas” and ordered it filled in. I’d like to think that he was secretly impressed by the crater, because who wouldn’t? Things move slowly in Turkmenistan and I wonder if it will ever happen.

My first impressions of Darvaza Crater, The Door to Hell in Turkmenistan

As our jeep crawls up a small sand dune, we finally got to see the flat plain below us. And whoa! 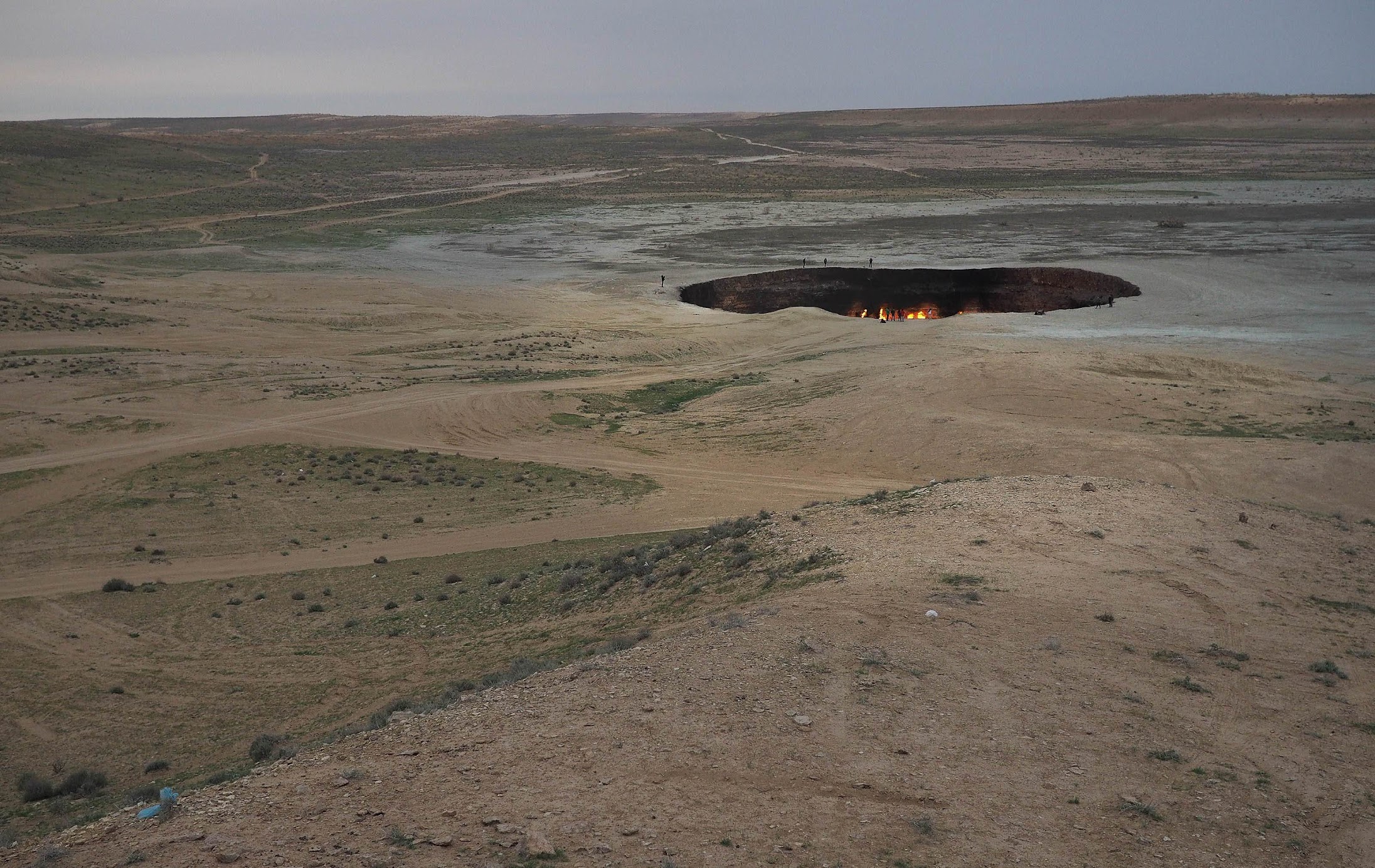 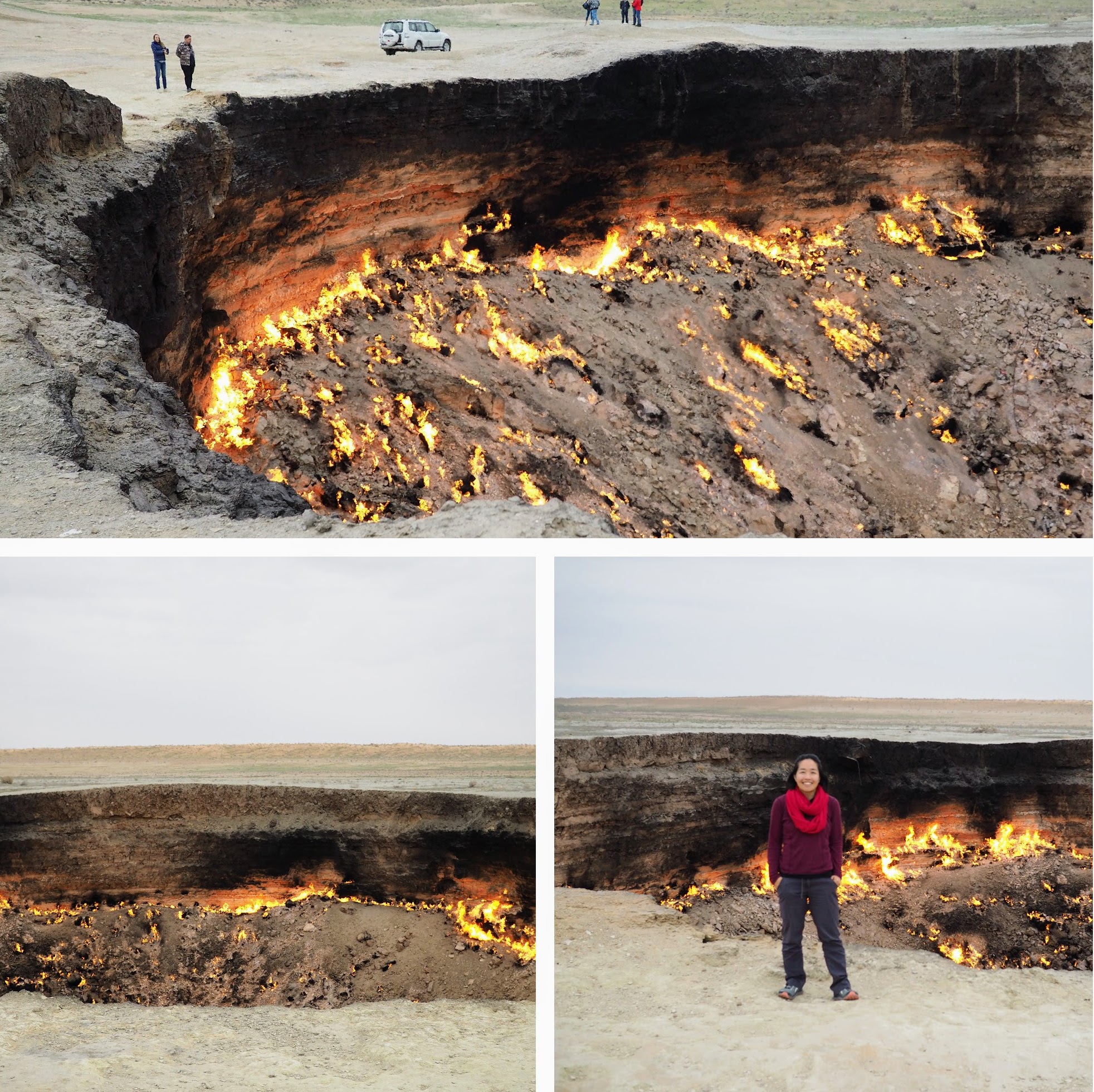 One of the first pictures I’ve taken of Turkmenistan’s Gates to Hell. Look at the people and car for size comparison. 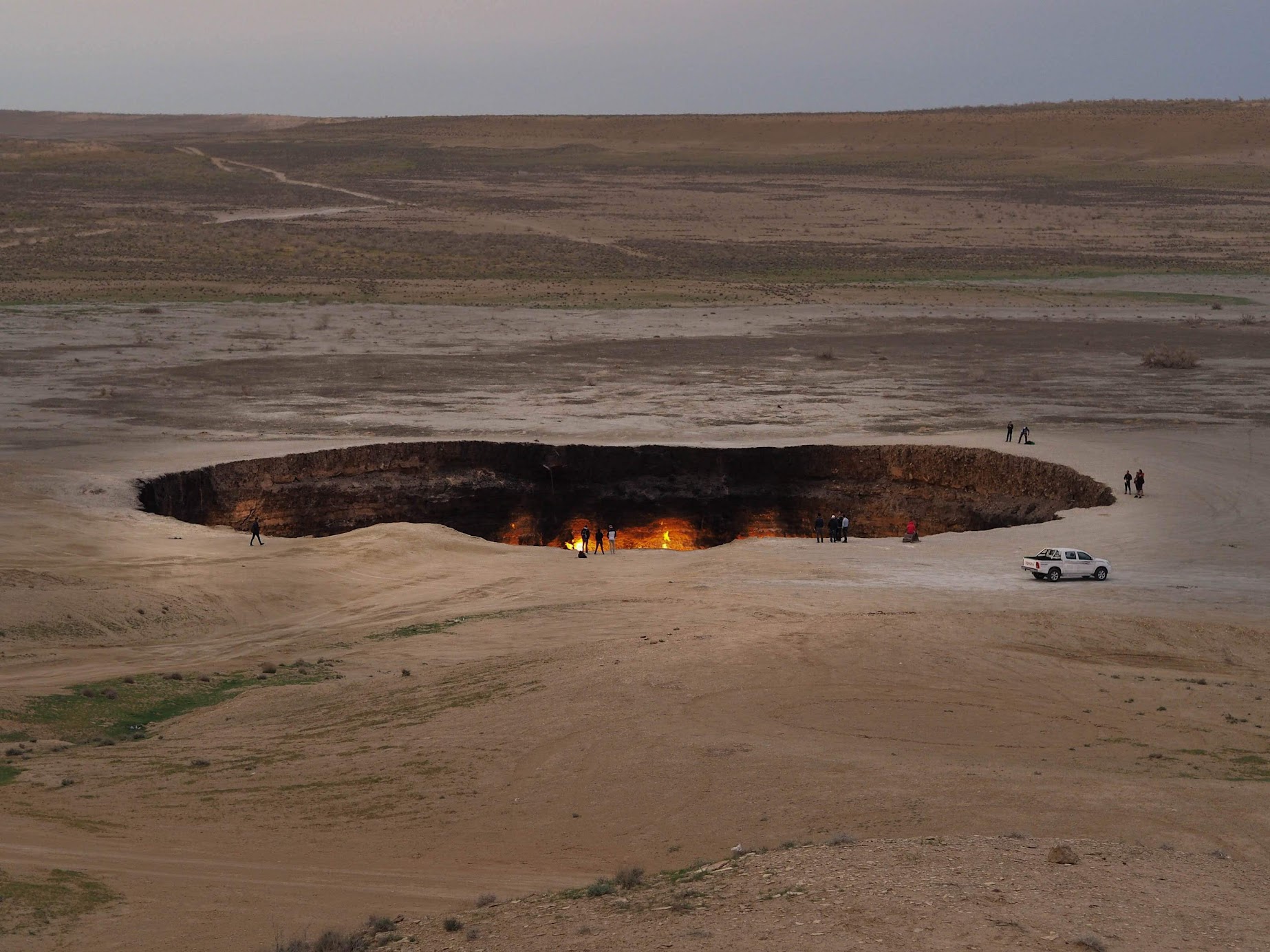 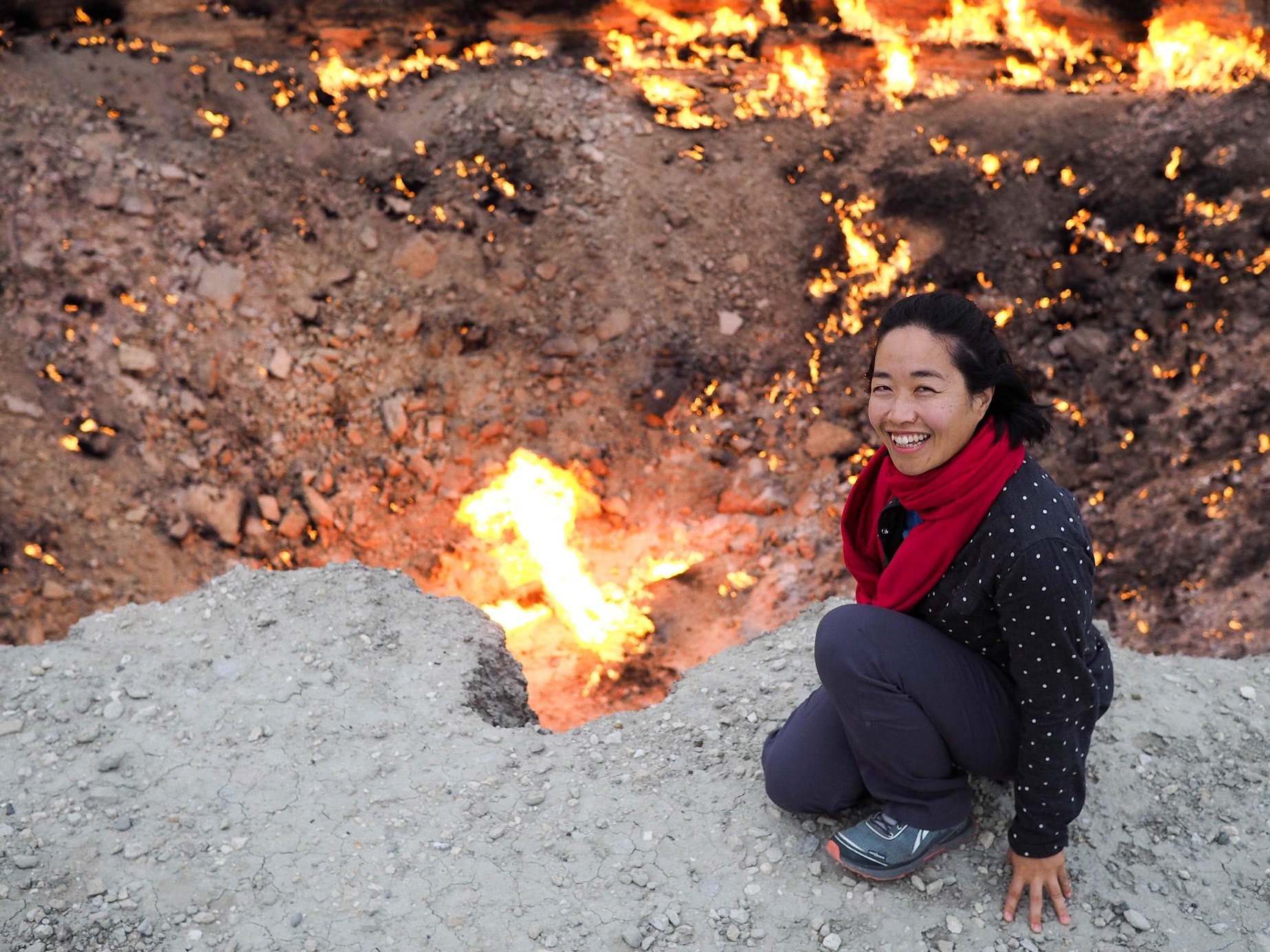 Looking back on this picture I can’t believe how close I was to the edge. As you can see, there’s no barrier around the fiery pit and the ground was basically crumbling mud. I imagine that falling into the pit leads to a very unpleasant death. 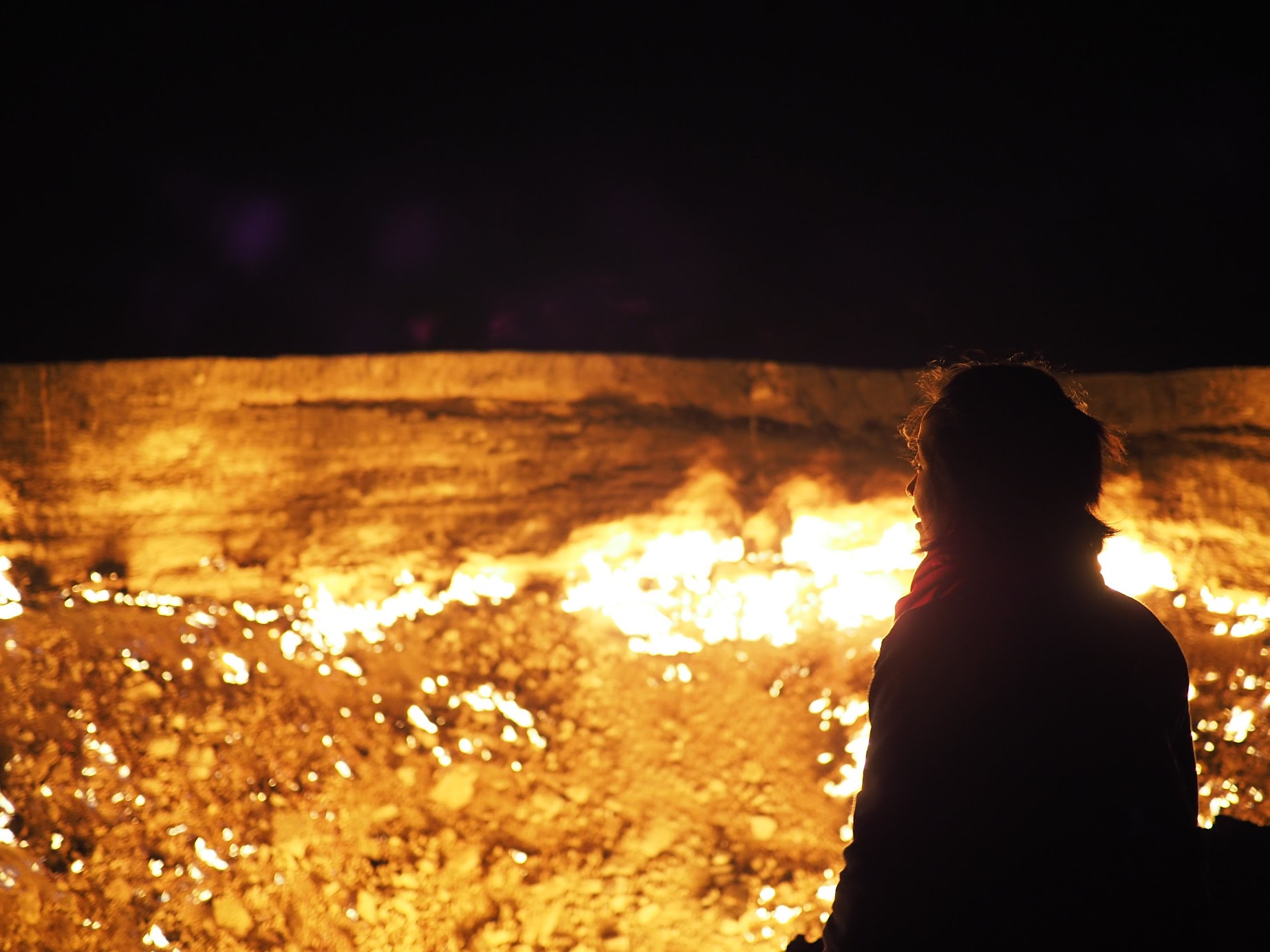 Darvaza Crater in the middle of Karakum Desert exceeded my expectation. I couldn’t take my eyes off the dancing flames. 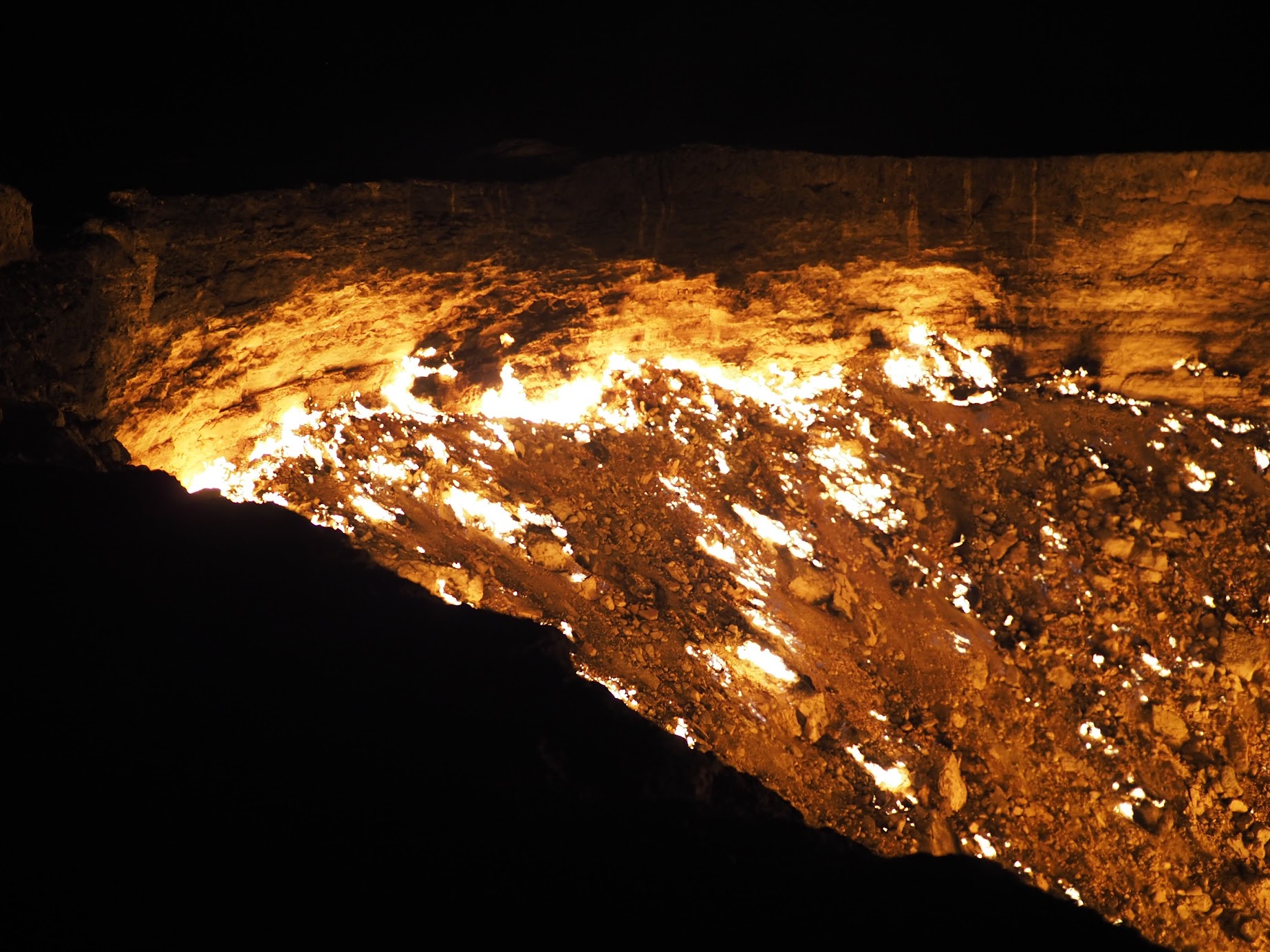 It’s hard to stress enough how amazing the experience was. The sight, the smell, and the sound of the crater, the contrast between the hot air on your face and the cold night air on your back. 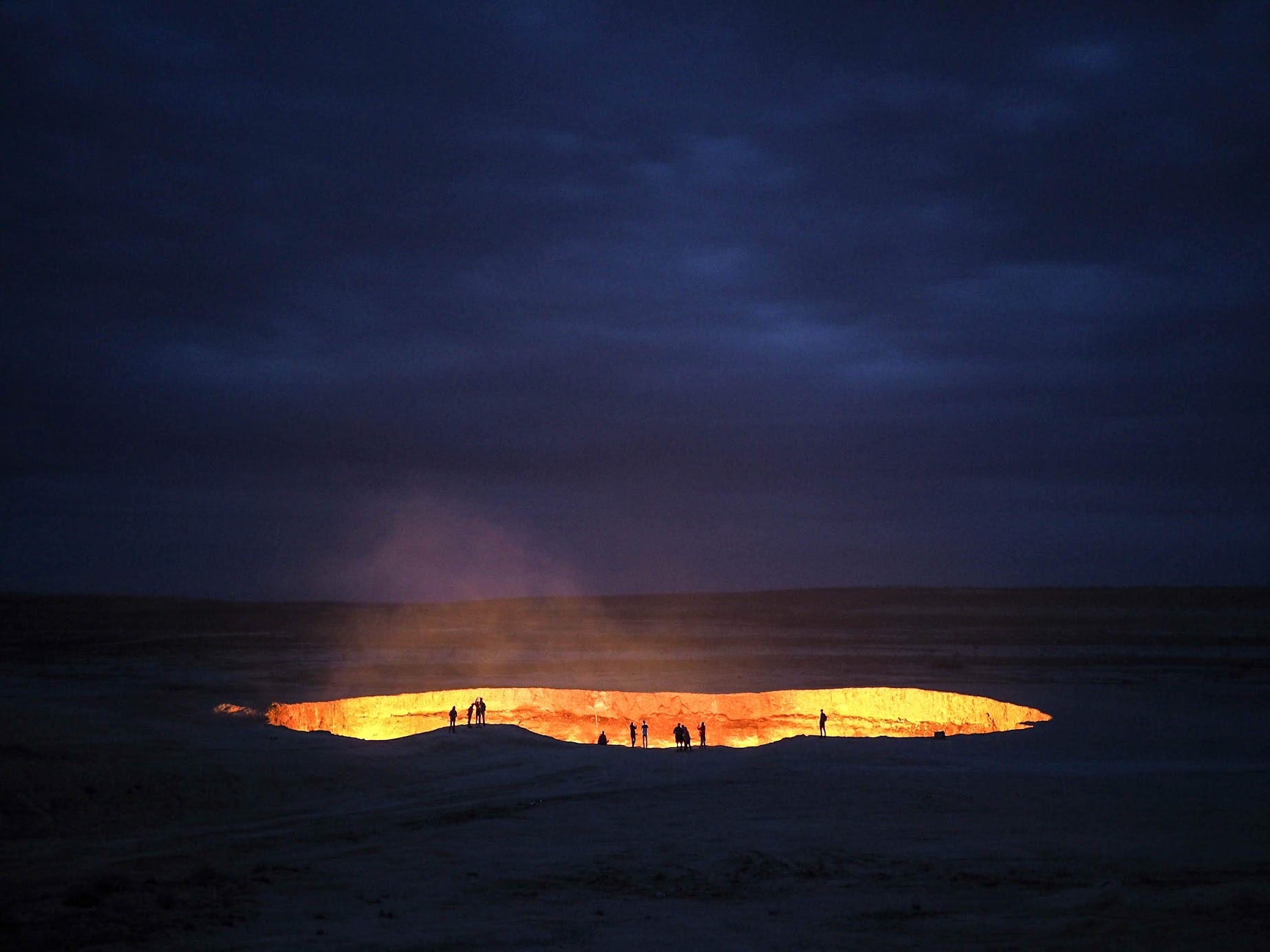 Nice giant fire to fend off the desert night chill. 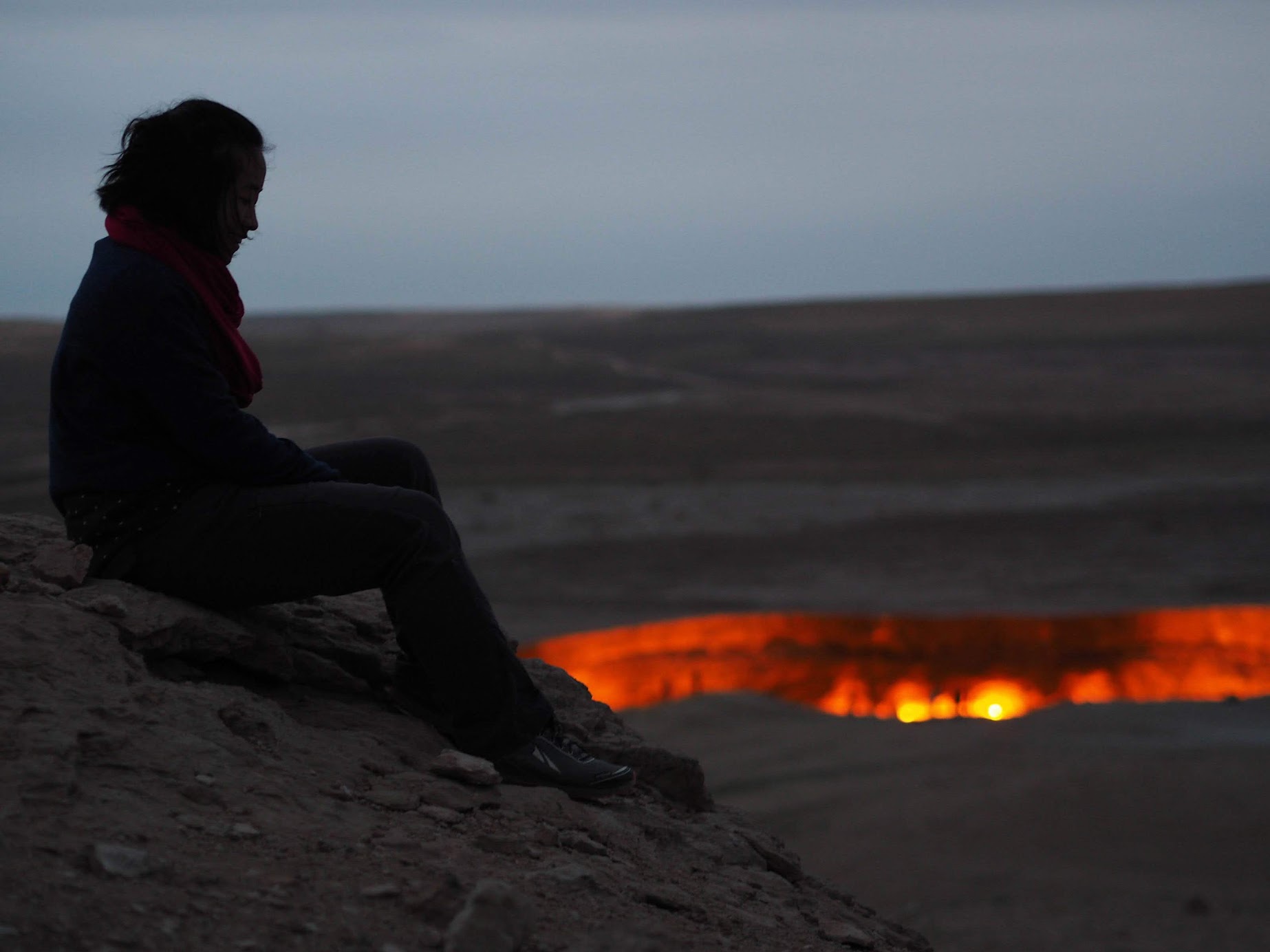 I clambered up a little mud hill to enjoy the crater by myself. I remember feeling out of sort. It was so surreal to be in a country like Turkmenistan. 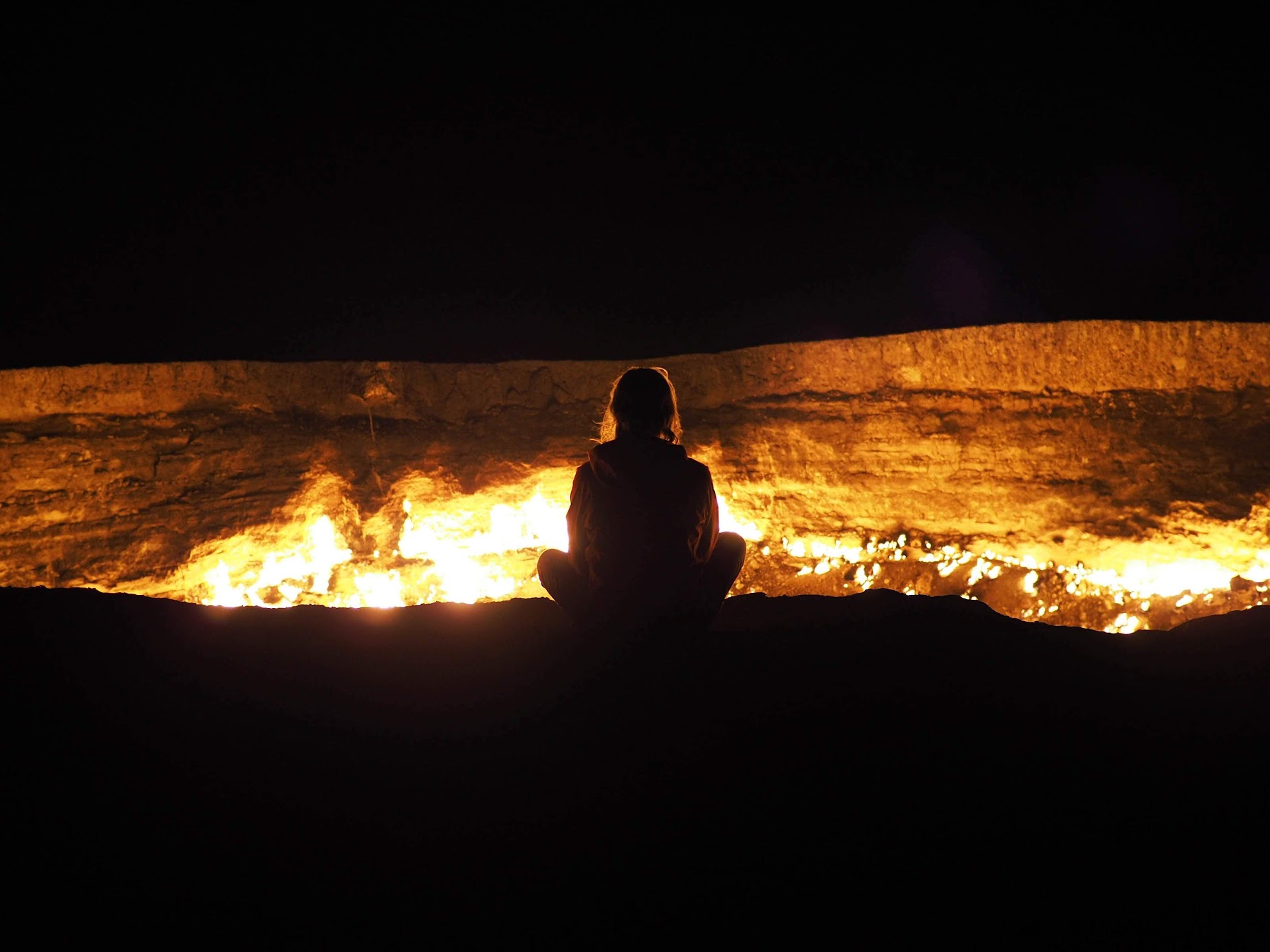 Sean, the only other American in the group, contemplating life/death/whats for dinner? 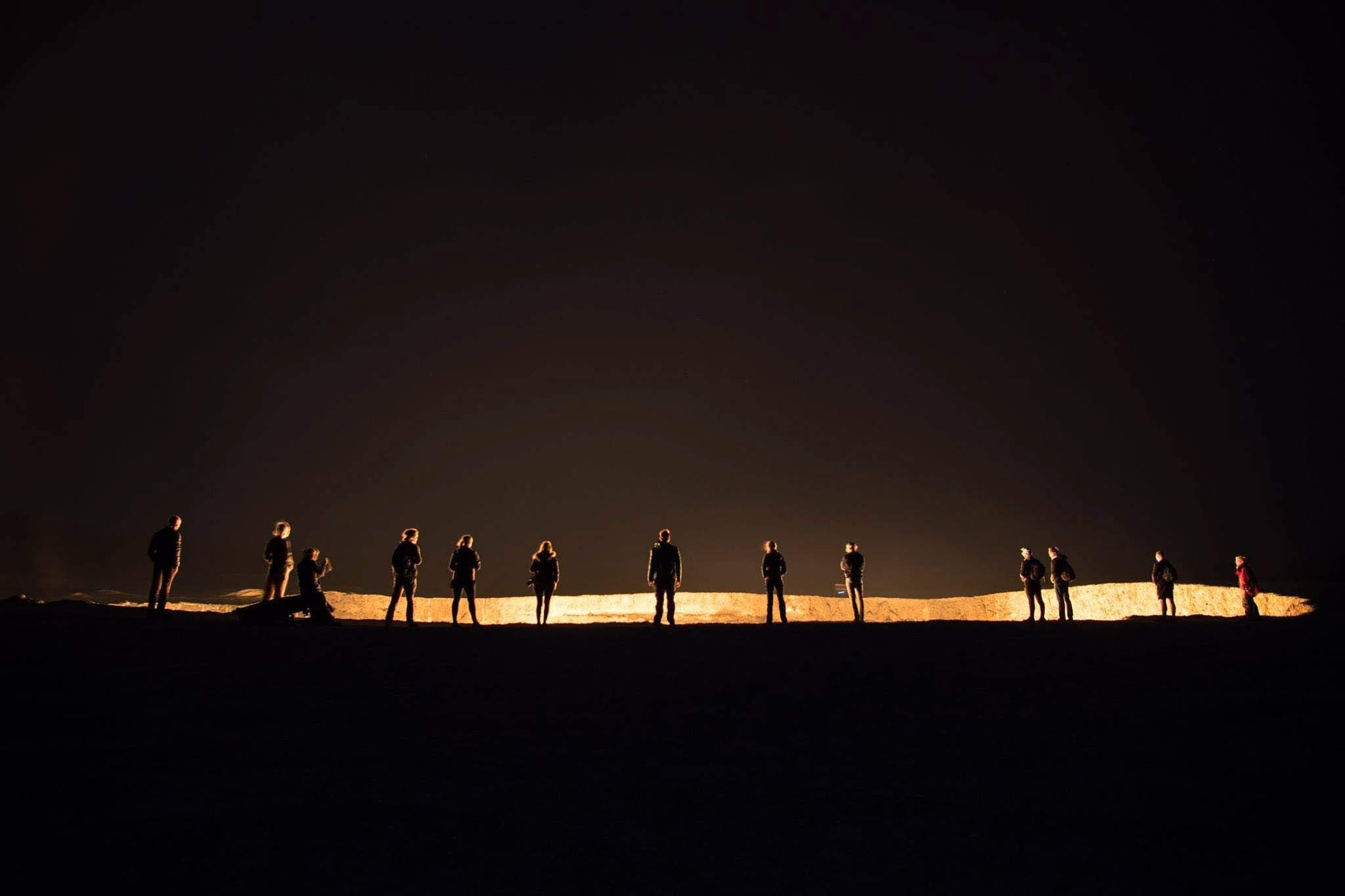 Darvaza Crater at night is photogenic for sure. Group photo, taken by A. Keogh 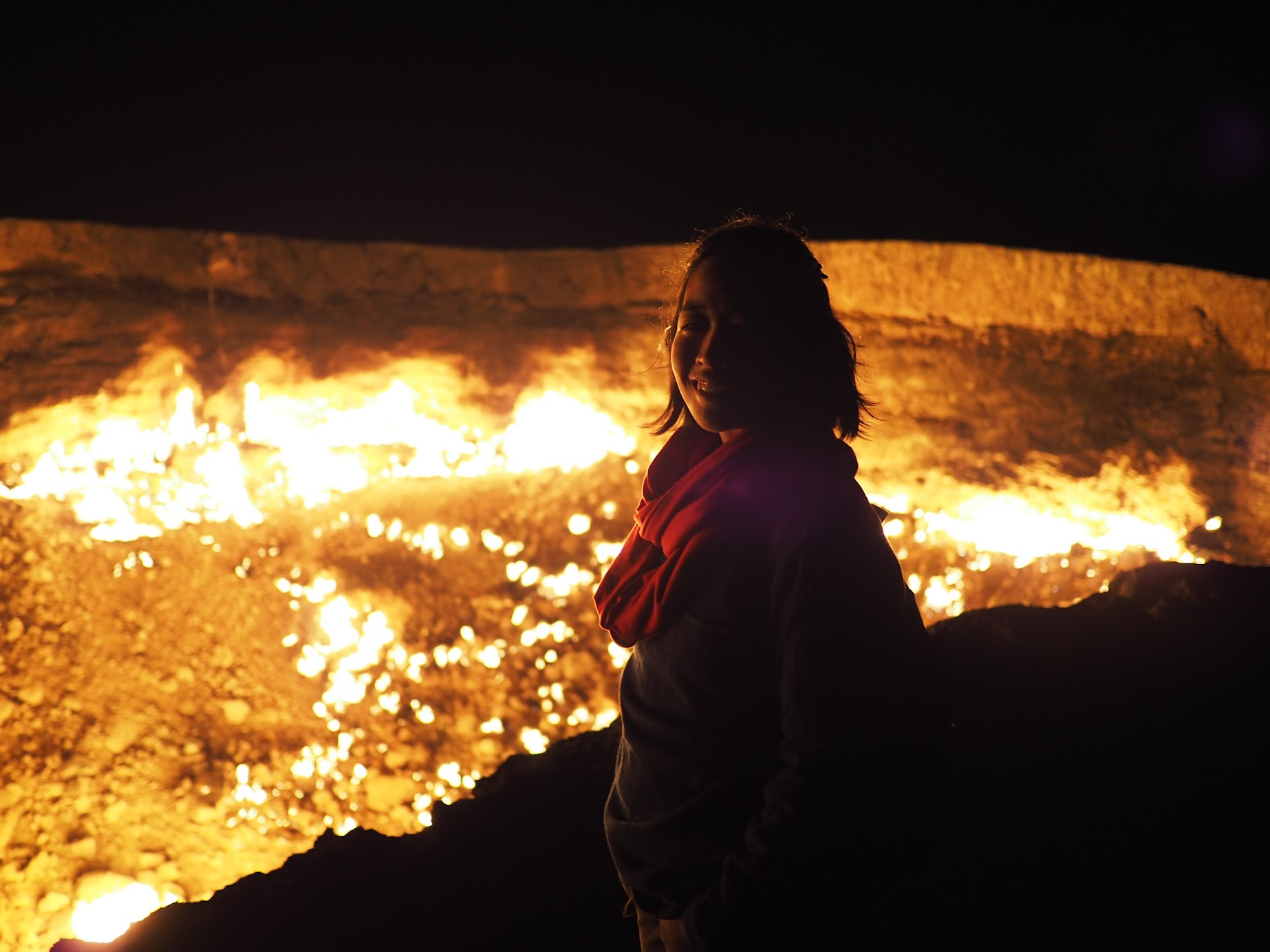 I still can’t believe I was there!

The most common trip here involves camping overnight so you can see the sinister fiery glow in the dark. Being in the middle of the desert, it gets chili at night. Even though tent and sleeping bags were provided, you’ll need to bring extra layers.

Before starting the 4 hour journey, we stopped to stock up on food and alcohol in Ashgabat. The latter was much treasured due to the desert’s biting chill at night. As we were enjoying the crater, the guides/drivers went a little further away to set up our tents near a shepherd’s hut and cooked dinner of chicken wings and roasted eggplant. Everyone turned out to be packing some sort of hard liquor, so there was much merriment to be had. 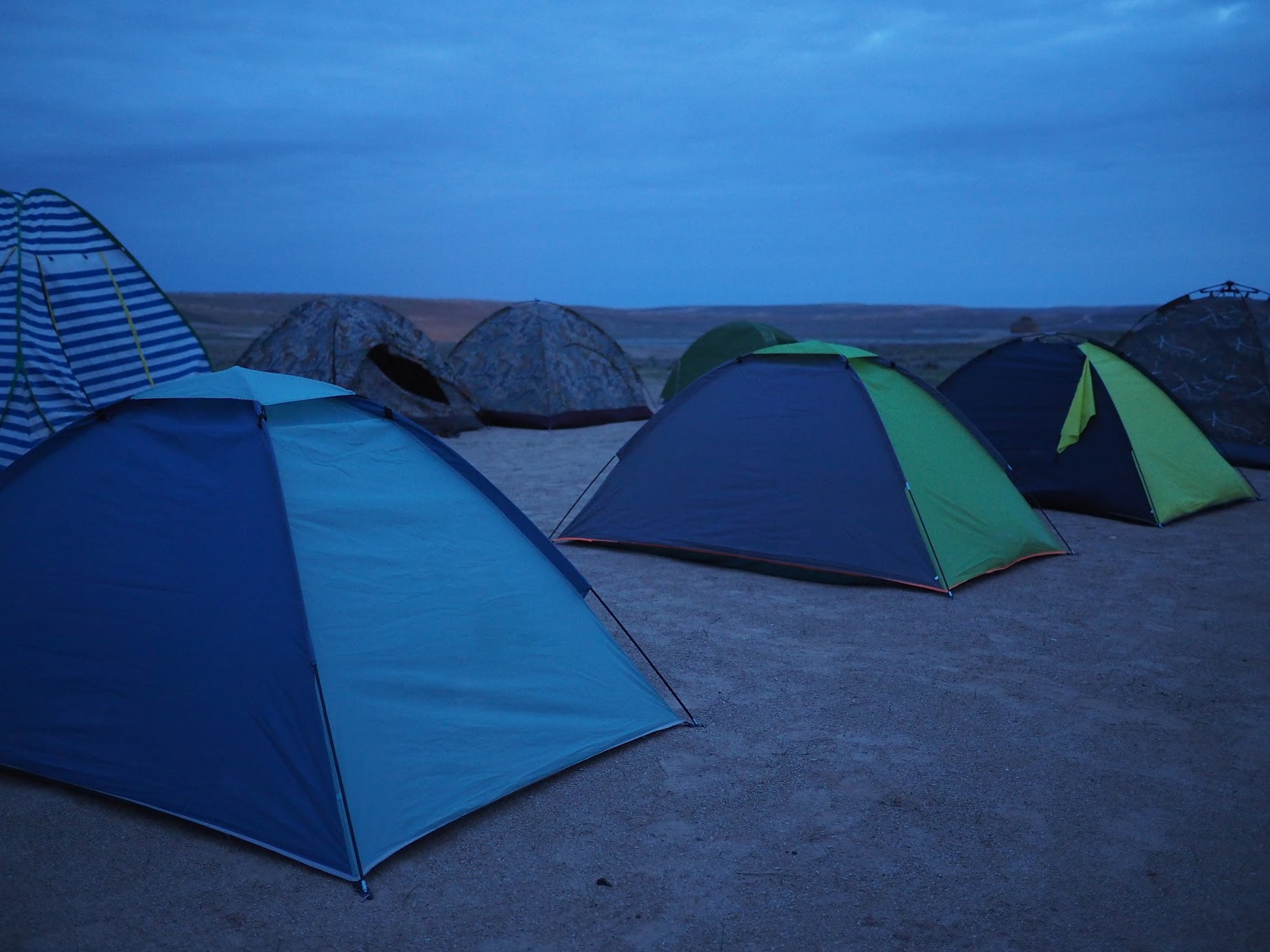 It got so very cold at night I doubted anyone of us got some sleep. It doesn’t help that my tent was inbetween 2 heavy snorers. Ugh. 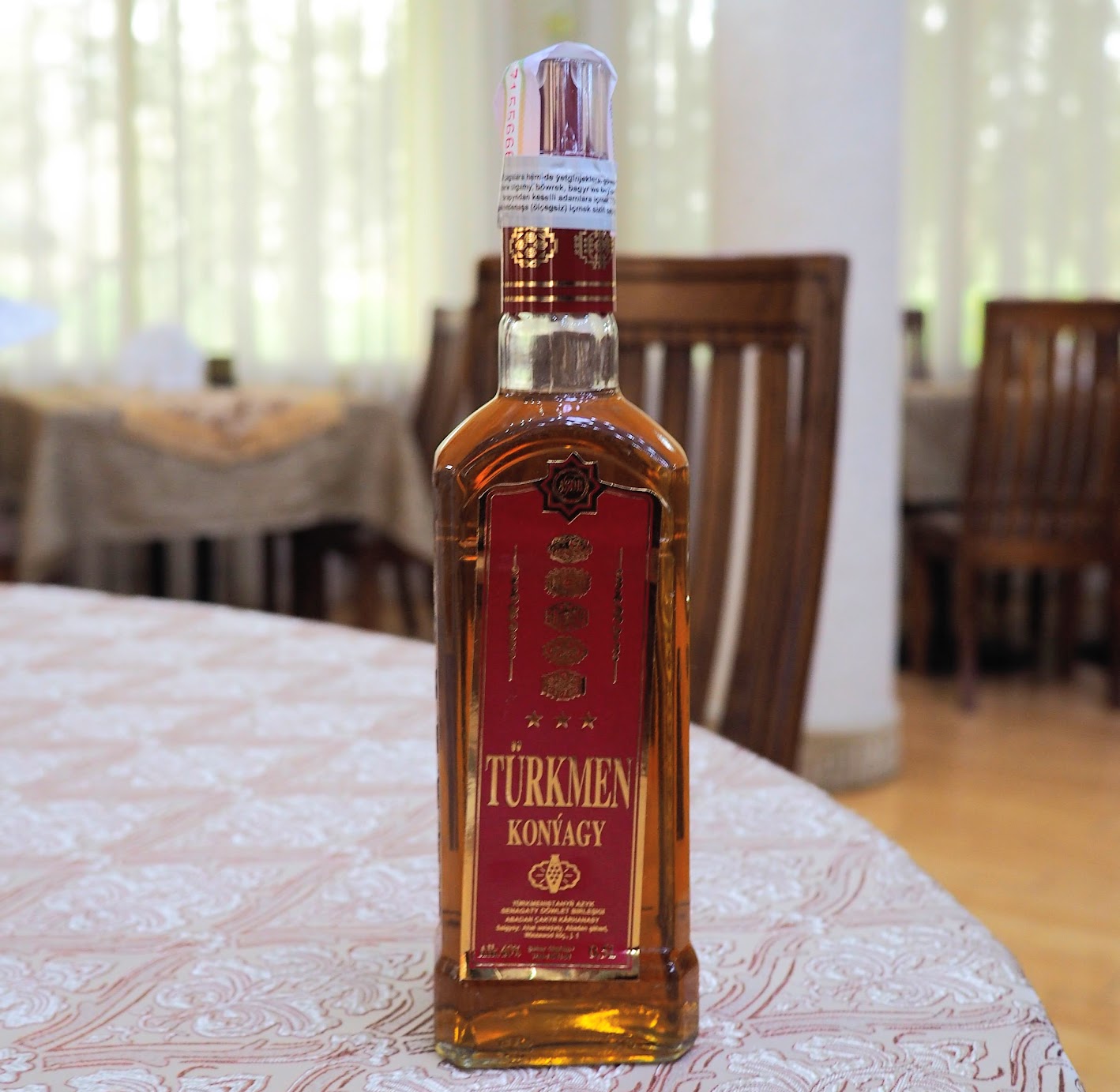 I got this cognac for the overnight camping trip at Darvaza. I loved how the label is crooked. For a $2 bottle, it went down much smoother than I expected. 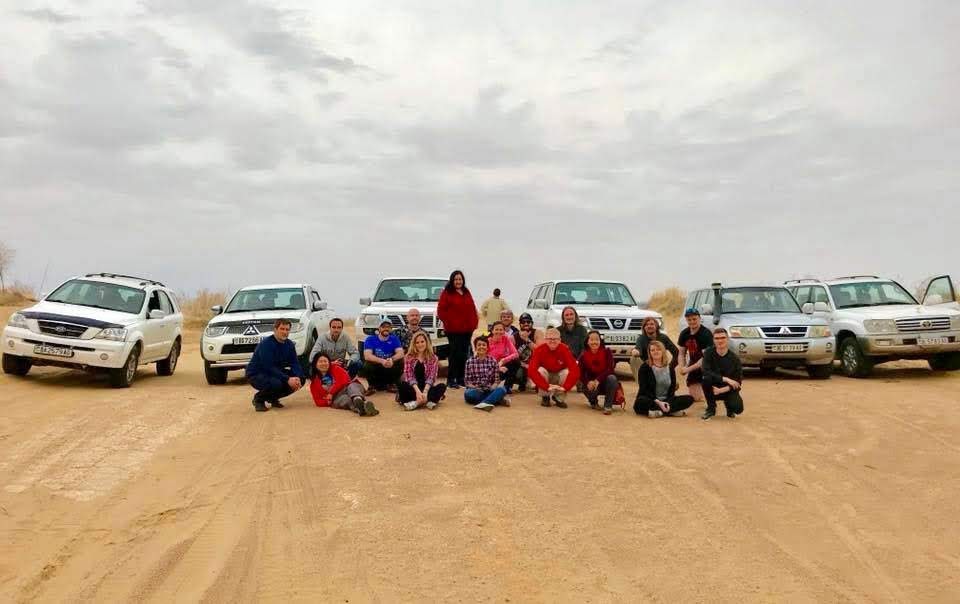 Our group convoy on our way to Darvaza Crater 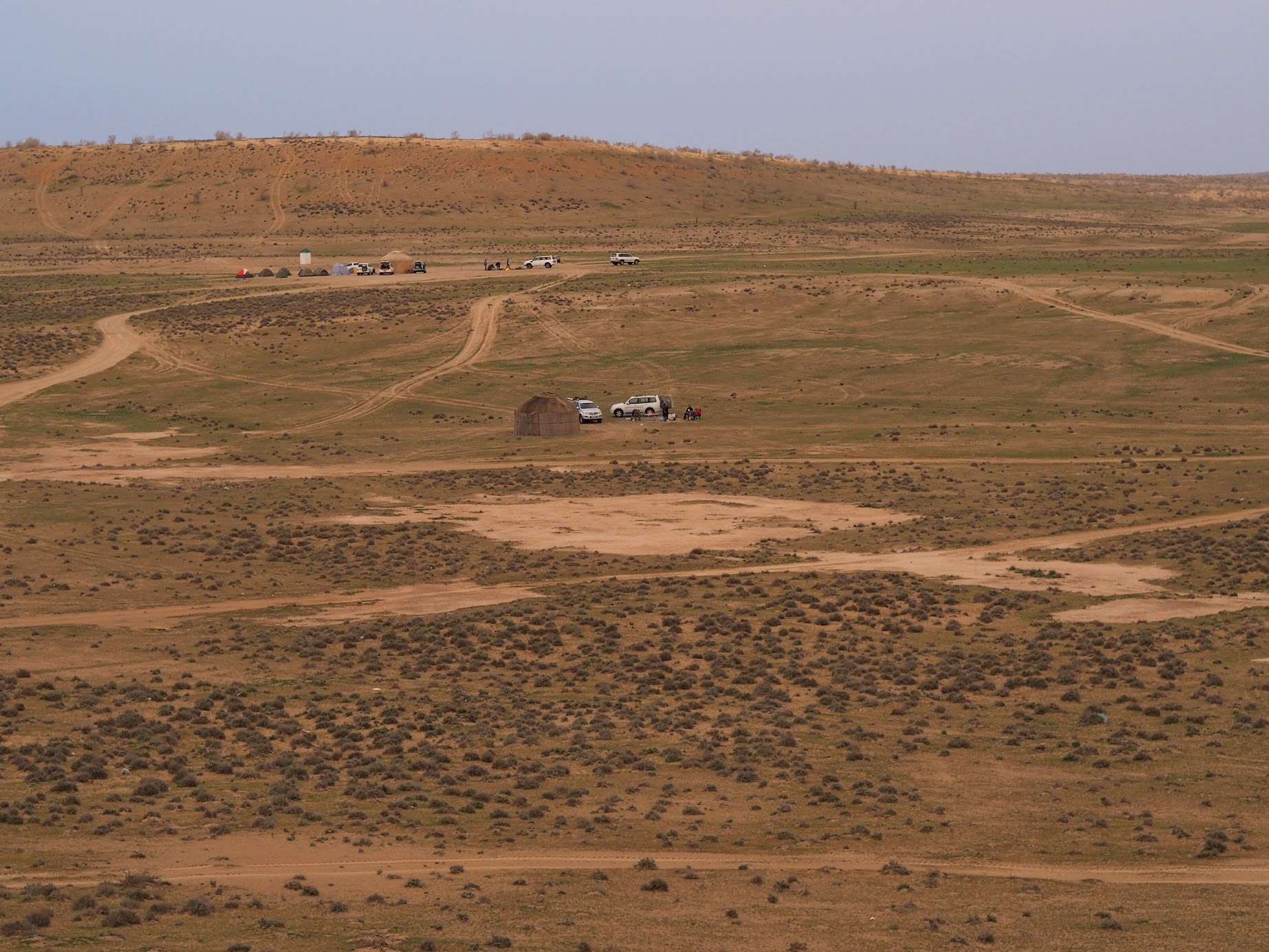 Turkmenistan typical desert landscape. Our camp is the cluster of cars in the background, about 400m from the crater. Another smaller group of tourists use the shepherd’s hut on the foreground. As you can see, there’s no facility whatsoever so the desert is your bathroom. 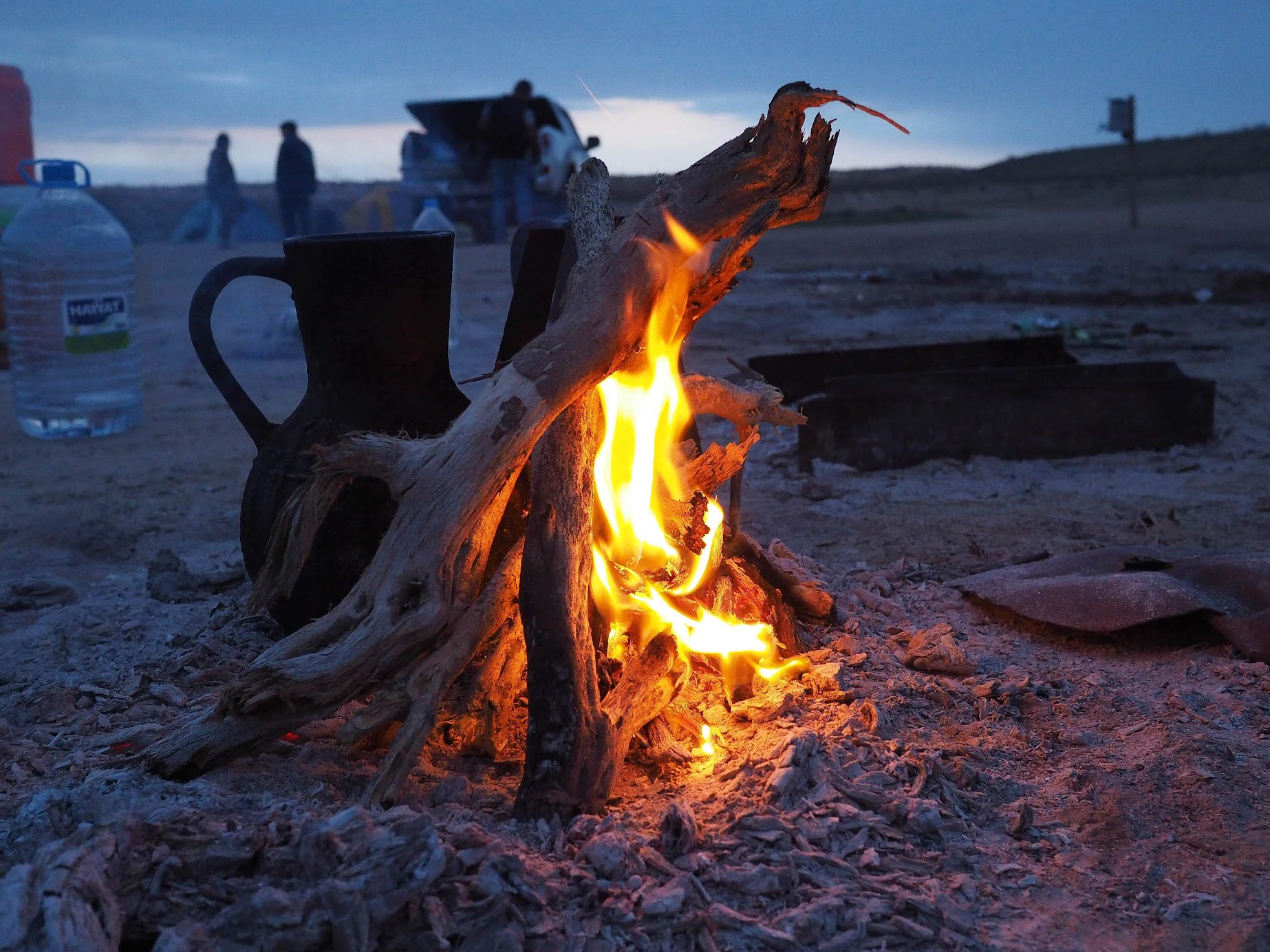 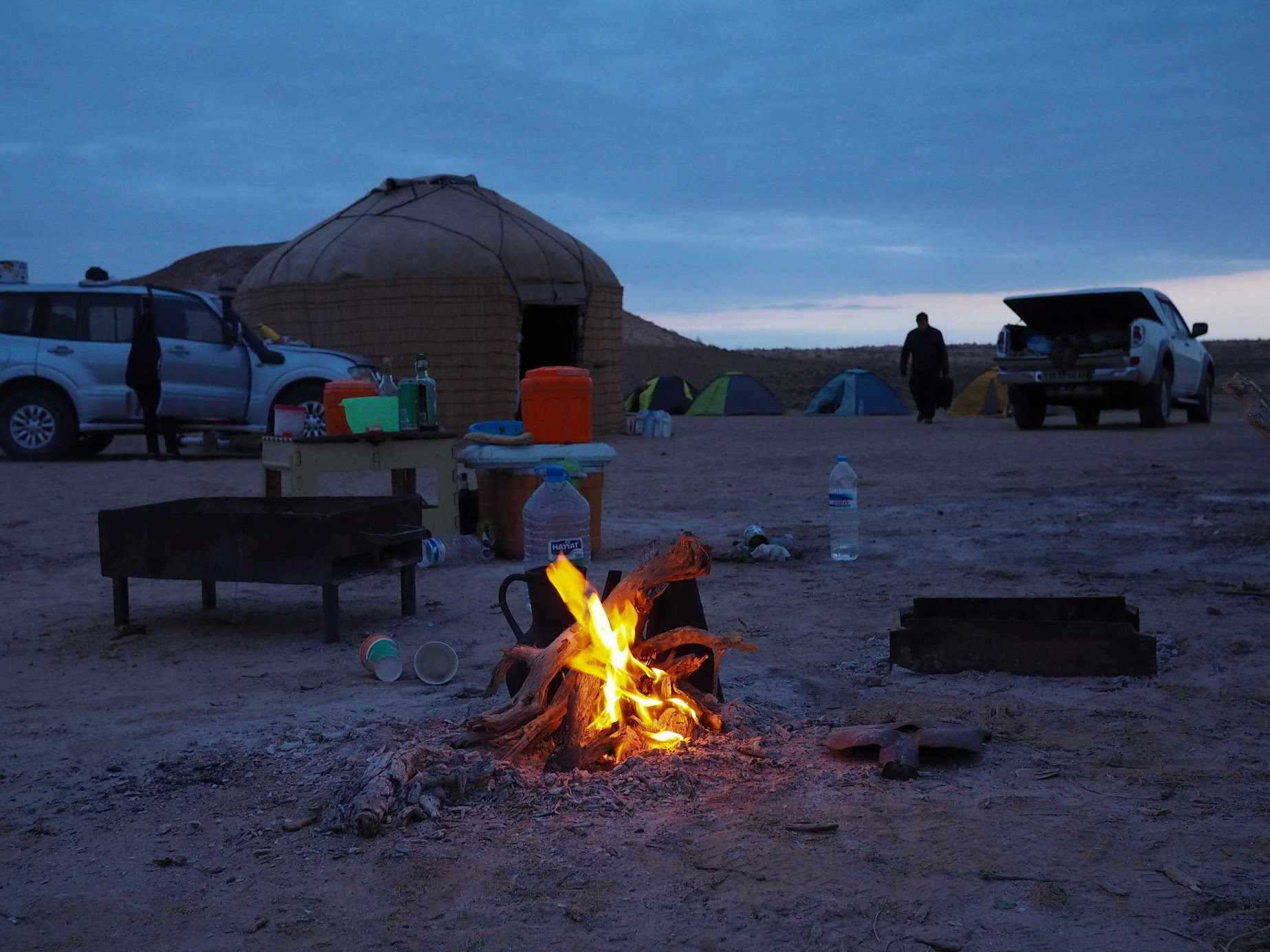 Our camp for the night.

On our way back from Darvaza Crater, we stopped at 2 other sinkholes. Compared to the sight we just witnessed the night before, they were positively underwhelming. 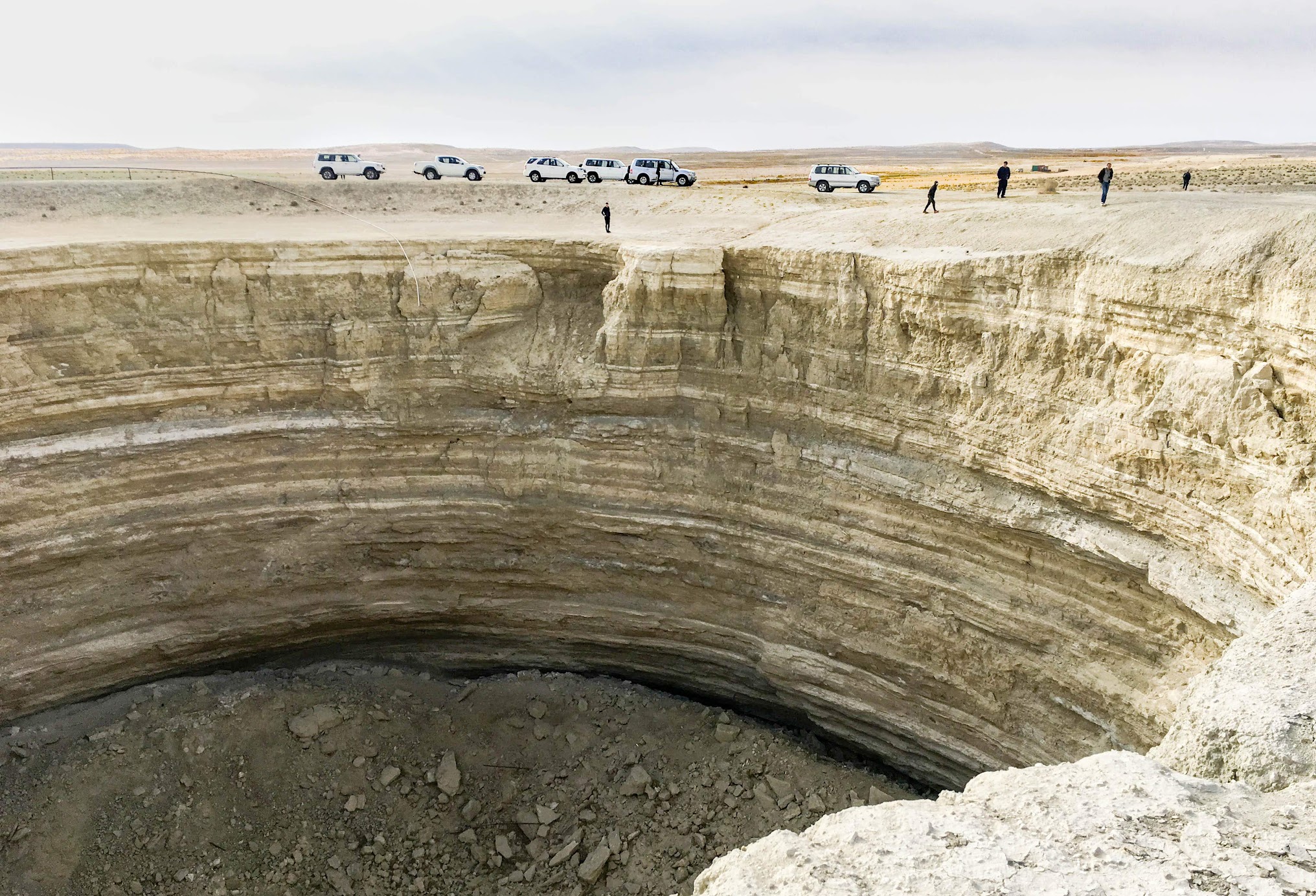 “Mud Crater” You can’t see it in this photo, but there’s a bubbling mudpool as well as small patches of fire. Definitely underwhelming. 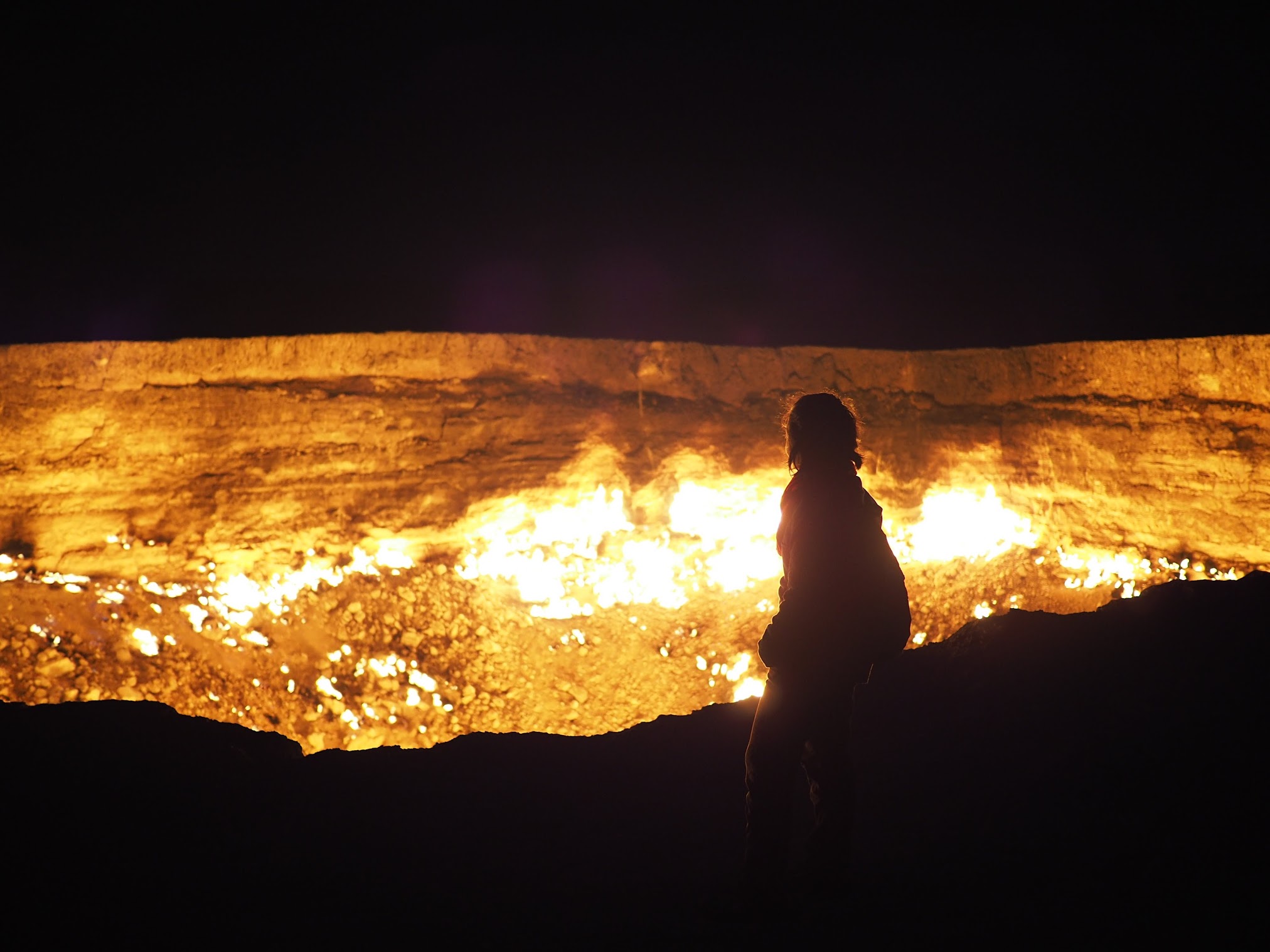 For many in our group, Darvaza Crater was THE reason to visit Turkmenistan. One can argue that the famous Gates of Hell is Turkmenistan’s only legit tourist spots. For me? It was the icing on the cake. A fitting end to a week of surreal landscapes, memorable encounters, and eyebrow-raising moments.

I decided to go to Turkmenistan because I was looking for different, and I sure got different alright. Darvaza Gas Crater is only one of the reasons Turkmenistan is – without a doubt – the weirdest countries I’ve been to (read why I think Ashgabat the weirdest capital city you’ll ever visit). I’ll be writing more about this country in the next few posts (see all Turkmenistan posts).

For something similar, but arguably even more impressive – you have got to check out Erta Ale in Ethiopia. A lake of bubbling lava that blew my mind! 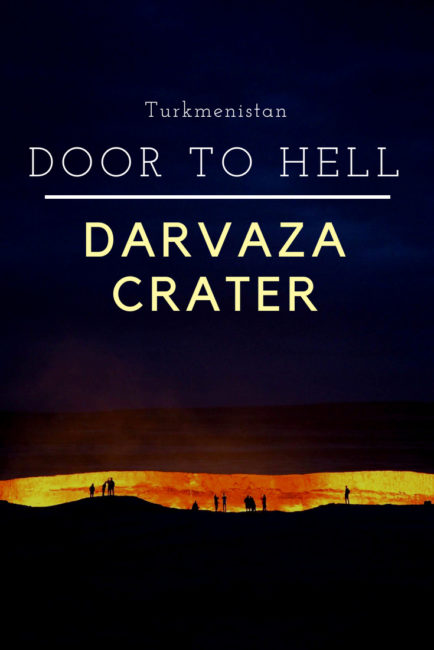 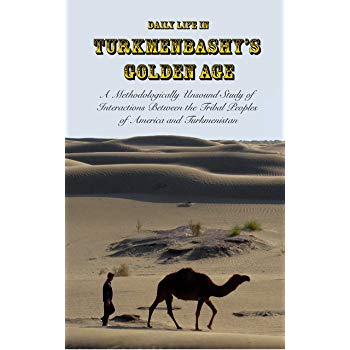