Mardi Gras World is Both Fun and Amazing

To be honest, I’d never given much thought into what goes on behind Mardi Gras. Who makes the floats? Who pays for them? What’s the deal with the masks? Those are the questions I’d never asked myself. Having a big aversion to rowdy and drunken crowd, Mardi Gras is not high on the list of things I’d like to do.

But being in New Orleans, I decided to visit Mardi Gras World. It’s not a museum, per se, but a giant working warehouse by the river owned by Blaine Kern Studios, a company that makes about half of the floats you see during Mardi Gras.

One one the guided tours, I got the answers to the questions above. And more. You can say that my visit here changed my view of Mardi Gras.

Upon entering the warehouse, I was greeted by row after row of giant, colorful props. President Lincoln stood next to the Witch of the West, who stood next to a Sphinx. 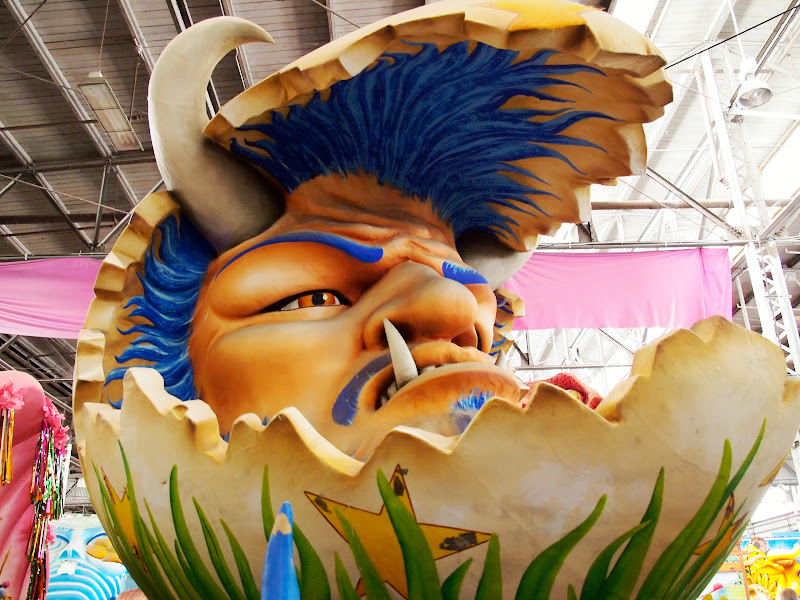 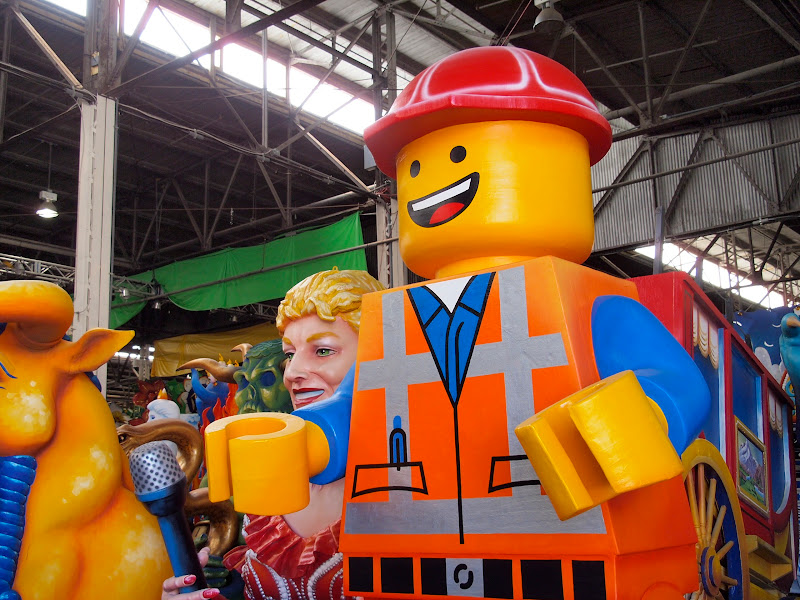 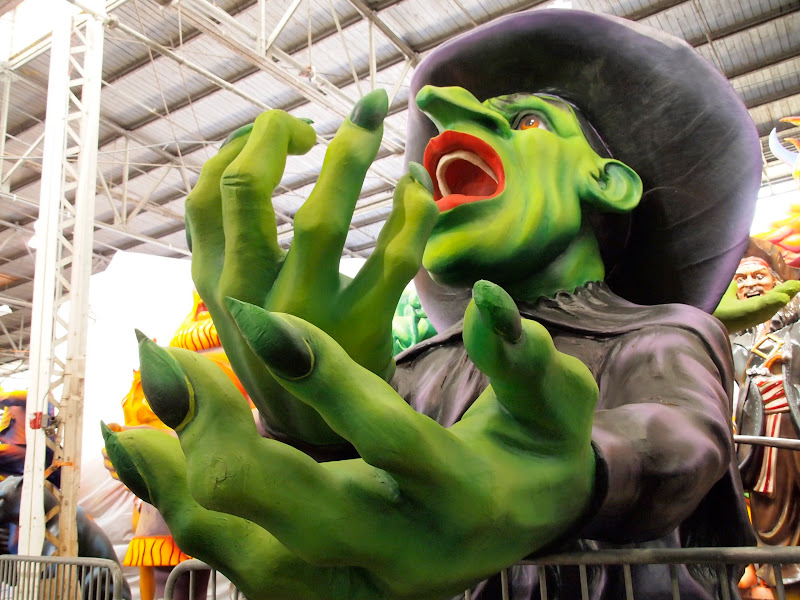 The first part of the tour of Mardi Gras World was a tad cheesy. We were allowed to put on some Mardi Gras costumes and take pictures next to some props. But the room was so dark that everyone in our group opted out of it. We were also given some King Cake to try, which I thought was a nice touch. 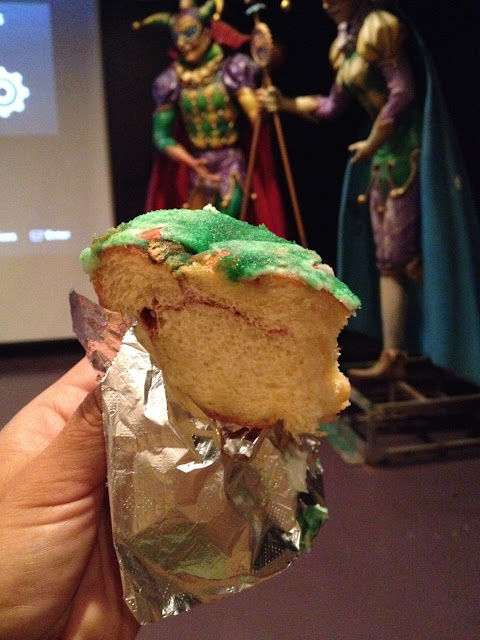 As we munched on a piece of King Cake, our guide played a movie that gave a background on how Mardi Gras tradition all started and of course, the krewes behind it.

After the movie, the guide took us through the warehouse to see the artists at work and explain the process of how a float comes to be: from a krewe deciding on that year’s theme, to sketches, to sculpting, and painting. And finally how the pieces all came together to create these elaborate and magnificent floats. (The more elaborate ones even come with light and pyrotechnic shows!) 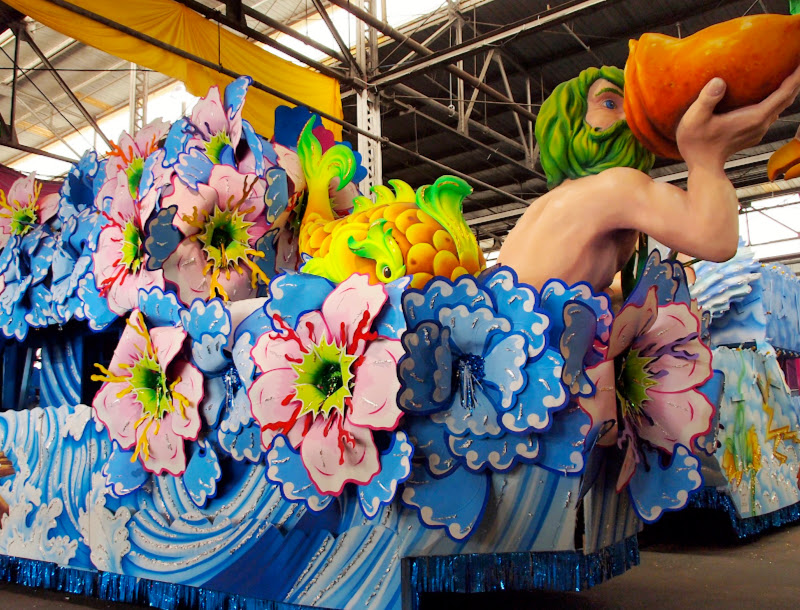 Ever wonder how to ride a float in Mardi Gras?

It turned out that you need to be a member of these secret societies, also known as krewes, to ride in Mardi Gras. Krewes are the organizations who are responsible for putting on the elaborate parades.

Your krewe membership fee pays the cost of building the floats. Membership fees vary from a couple of hundreds to a few thousand dollars. On top of that, you have to pay for your own costume and throws.

It’s not cheap to ride a float in Mardi Gras. Like our guide said, “Some people go on vacations somewhere, for these people, this is their vacation” as he gestured to the various floats in the warehouse. 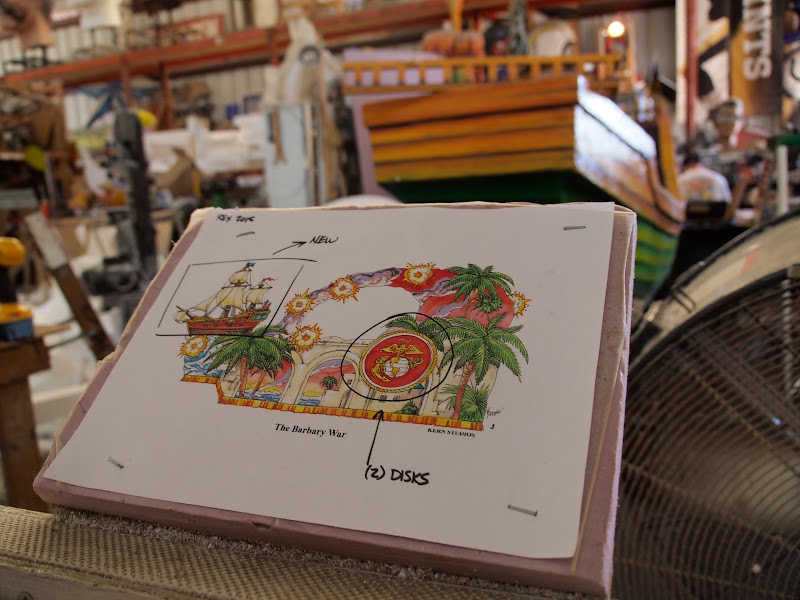 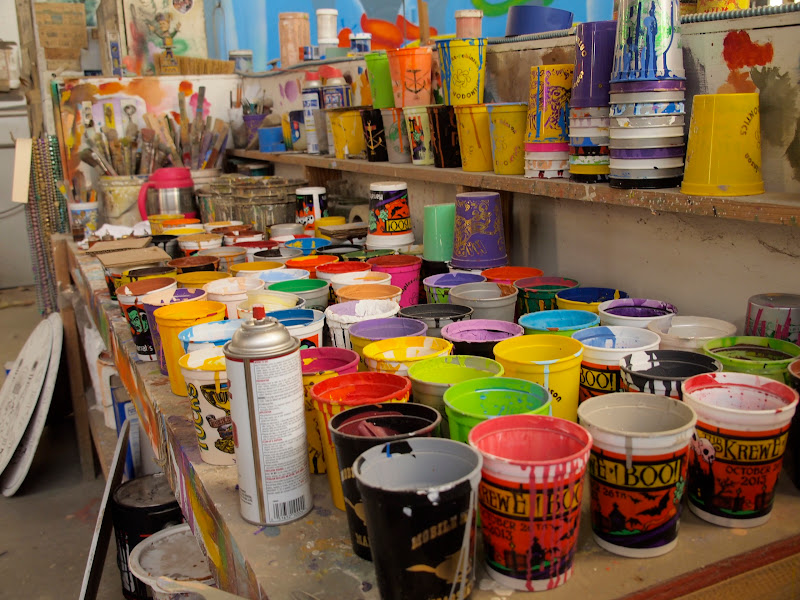 After the sculptors are the done, the props are transferred to the painting department.

My favorite part about this visit to Mardi Gras World is what comes after the guided tour.

They let you wander around the warehouse after the tour for as long as you wish, on your own. I was free to chat up the artists and watch them at work. There were sculptors carving glued pieces of styrofoam, covered in bits and pieces of styrofoam and painters working on the finished sculpted pieces. 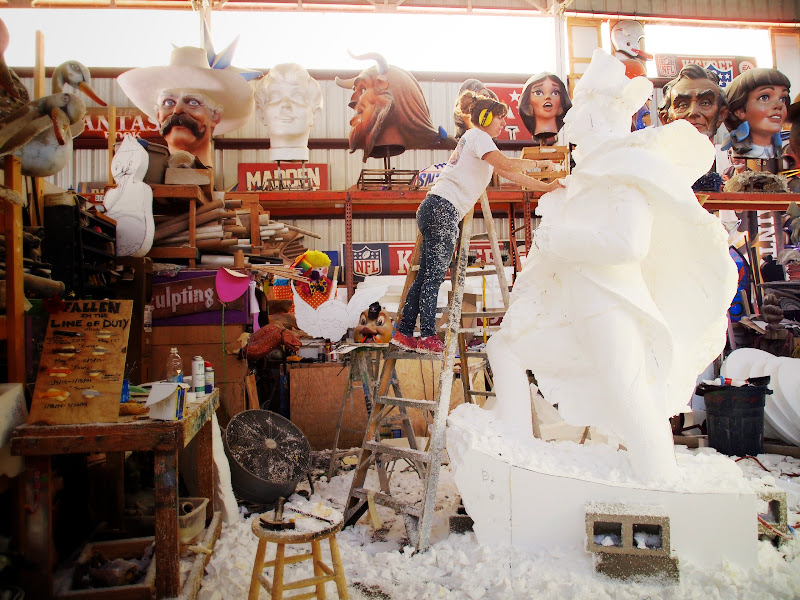 An artist carving a giant block of styrofoam 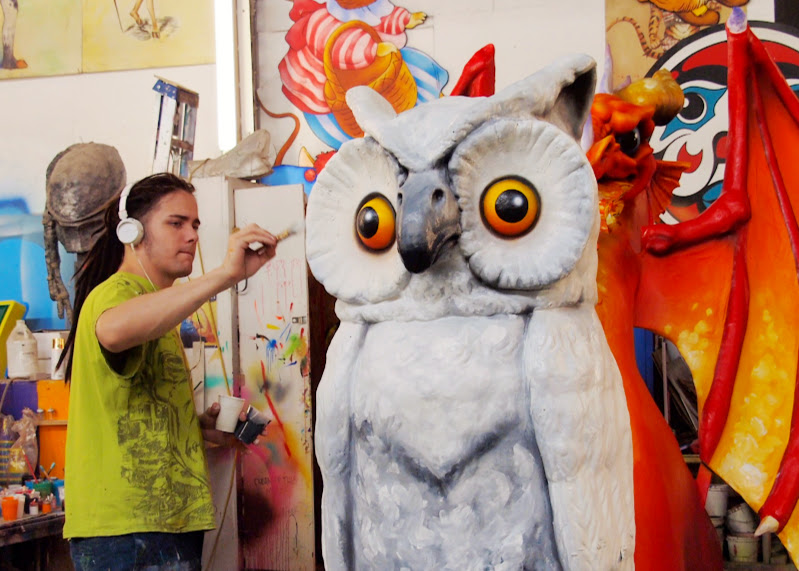 Putting the finishing touches on an owl 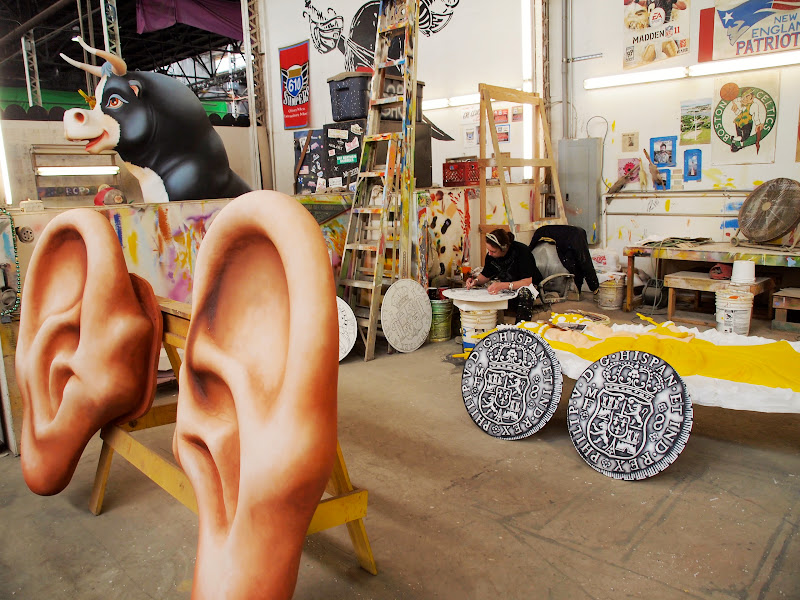 I wonder who these ears belong to

Float production is a year long ordeal. As soon as the party ends, these guys start working on next year’s floats.

Sometimes the artists repurpose old props. You know, why re-invent the wheel kind of thing. The props are catalogued in such a way that say, for example someone needs a build a cow, they can find all of the various cow props they’ve done in the past and track it down to repurpose. 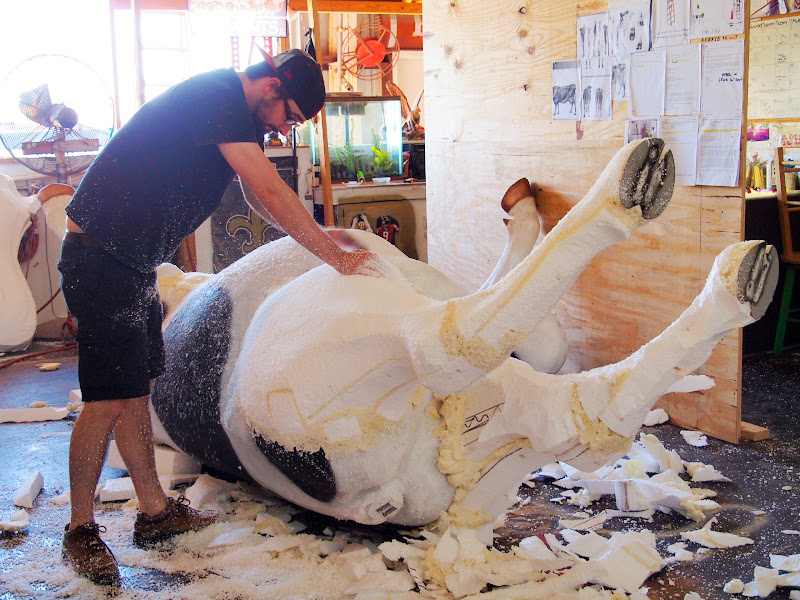 Removing the old and adding new limbs to this cow prop.

Previous years’ floats that take up the majority of the warehouse and we were free to get wander among them. Up close you get to see the amazing details that went into them. I was just blown away. 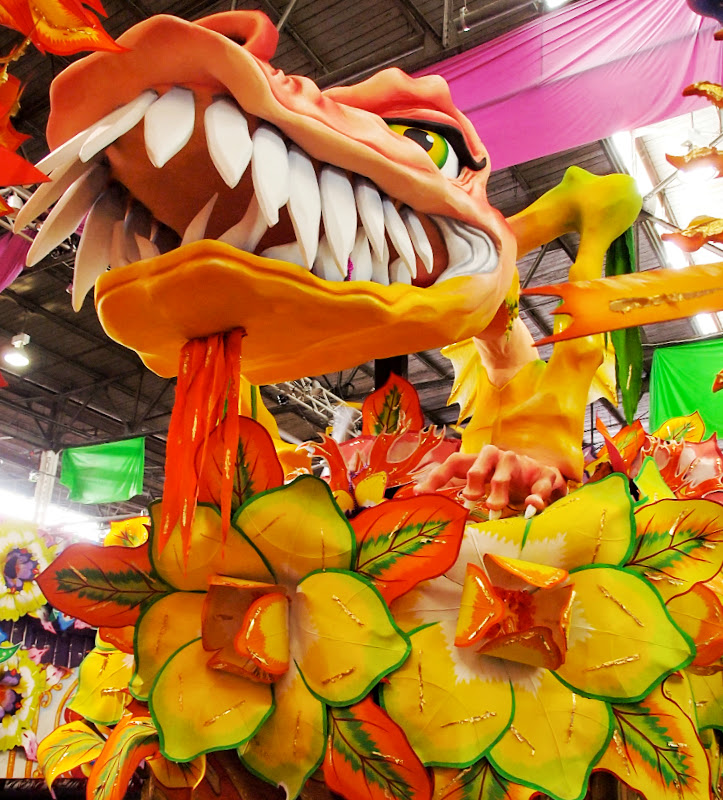 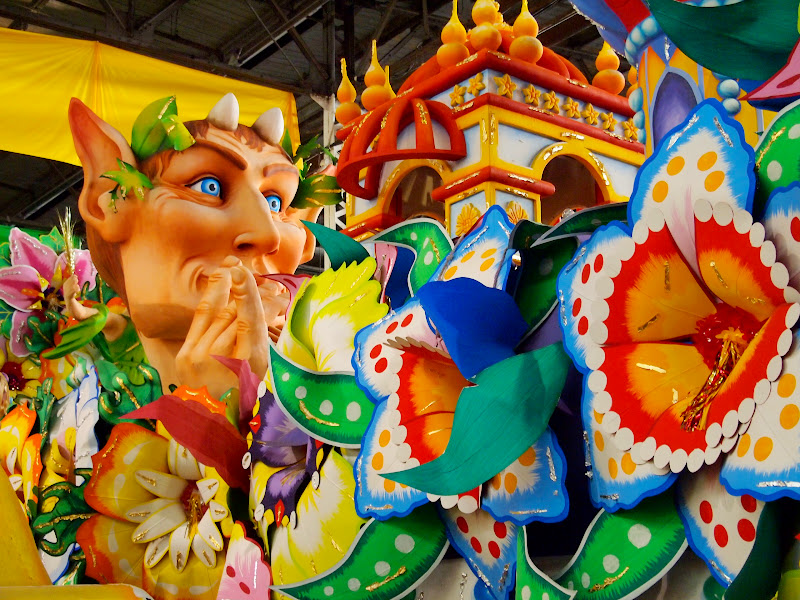 The visit to Mardi Gras World changed how I viewed Mardi Gras for the better… It might just have convinced me that maybe it’s worth seeing after all even if it’s just to see these amazing floats come alive. Make sure to put Mardi Gras World on your New Orleans bucket list. I think you’d really enjoy seeing what goes on behind one of the world’s largest festivals. 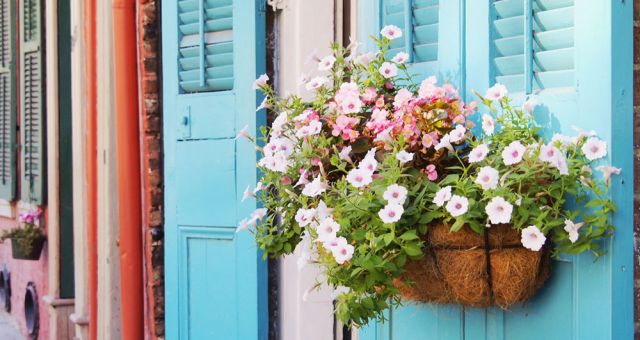 My Highs and Lows of New Orleans