Ways to Enjoy Spring in Yellowknife

Most visitors come to Yellowknife in Canada’s Northwest Territory for one thing and one thing only: to see the northern lights. Its location on the 60th parallel (sub-arctic), flatness, and lakes makes it one of the best places in the world to see the auroras.

As seeing the northern lights is an exclusively nighttime activity, I was worried that there wouldn’t be anything to do during the day, Yellowknife being a small (20.000 people) and remote town. Fortunately we heeded the advice of our host and came in March when the temperature is milder (usually I wouldn’t call -23F ‘mild’ but it’s all relative) and there’s enough daylight to do stuff around town. Each year in March, the Snowking and his helpers build a snowcastle on Yellowknife Bay. Like the name suggests, it’s a castle made completely of ice and snow. The snowcastle acts as a venue for local bands and performers in weekend evenings. During the day, the castle is open for visitors.

The highlight of our visit was the giant slide made completely of ice. SO.MUCH.FUN. So fun we had to elbow kids out of the way. That alone made it worth the $5 admission. 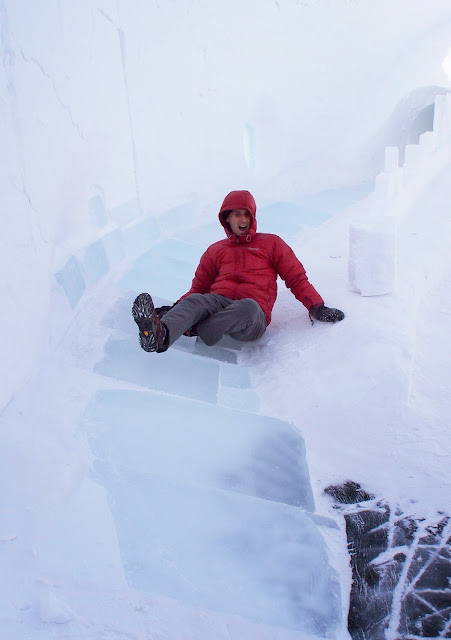 Giant slide made of ice in Yellowknife’s snowcastle

Surrounding the snowcastle are colorful houseboats, stuck in the frozen lake water for the time being like M&M’s on vanilla frosting. 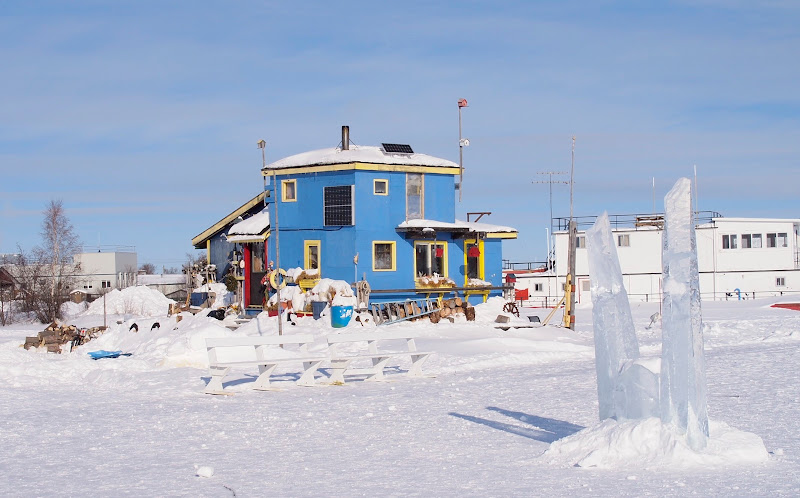 Driving on the ice road

For you guys who are used to super cold weather, this might not seem like a big deal. But for us, the fact that whole lakes can freeze solid, so solid that trucks can drive on them, is just wild. We’re talking BIG trucks too – did I mention this is where the TV show, Ice Road Truckers, was filmed?

Of course we had to check to make sure that we just won’t randomly collapse into the lake by stomping and jumping on the ice as hard as we can. And pushing it very firmly with our hands. Very scientific-like. 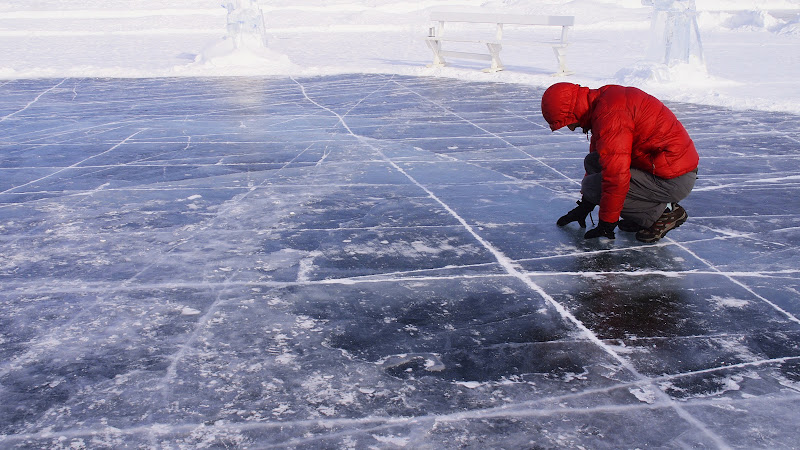 Jack testing the solidity of the ice 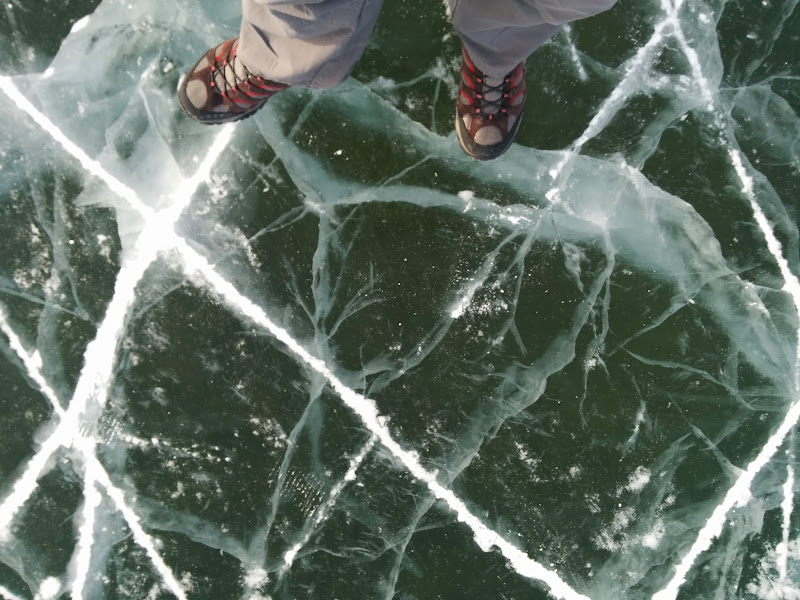 We also got a kick out of this: 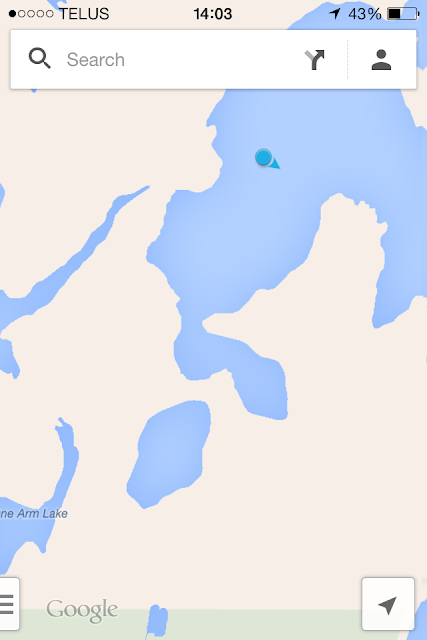 We’re driving on a lake!

Bullocks Bistro serves arctic char, pickerel, trout and other locally sourced fish. The menu is simple, “Do you want your fish deep fried, pan fried, or grilled?” and at $30+ per plate, it’s not cheap. But nothing in Yellowknife is. 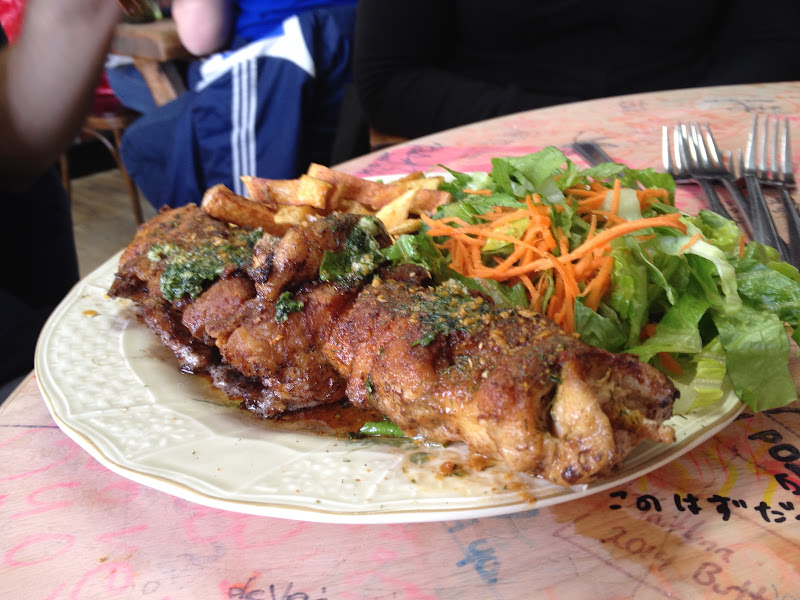 The kingfisher plate – an assortment of local fish, grilled, and doused in delicious dressing.

Despite the price, the restaurant had a casual, ‘old town’ atmosphere that we enjoyed. It could get crazy busy though. 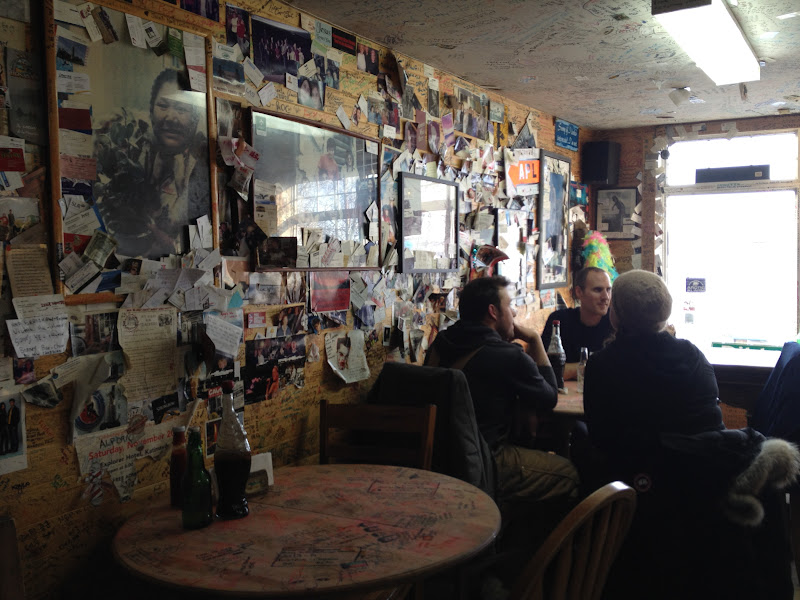 The interior of Bullocks Bistro: walls covered with bumper stickers, business cards, posters, and what not courtesy of previous clients. 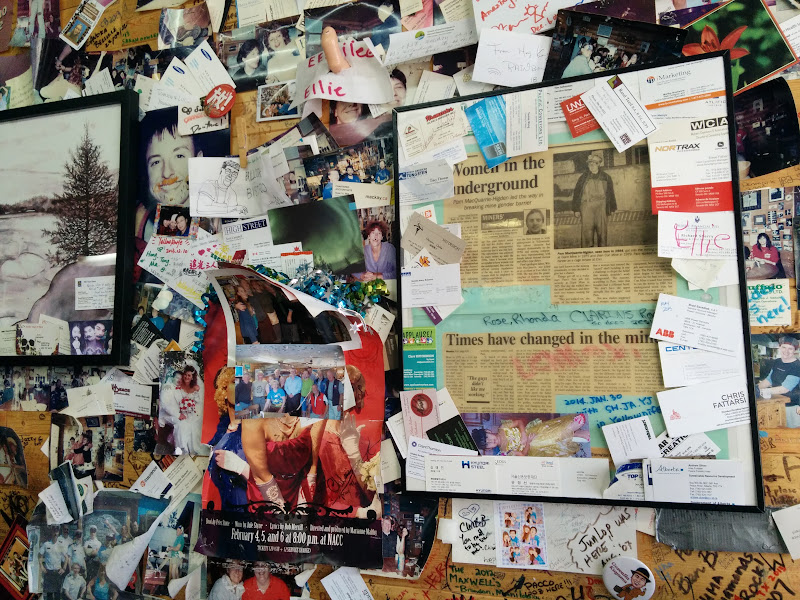 And of course there’s the snow.

The crunch of dry snow beneath our feet and the blinding whiteness that filled our vision wherever we looked were our constant companions.

Not surprisingly with all of this snow, dog sledding and snowmobiling is a popular activity for visitors. However, we opted for something lower budget: we bundled up in as many layers as we could and played in the snow, 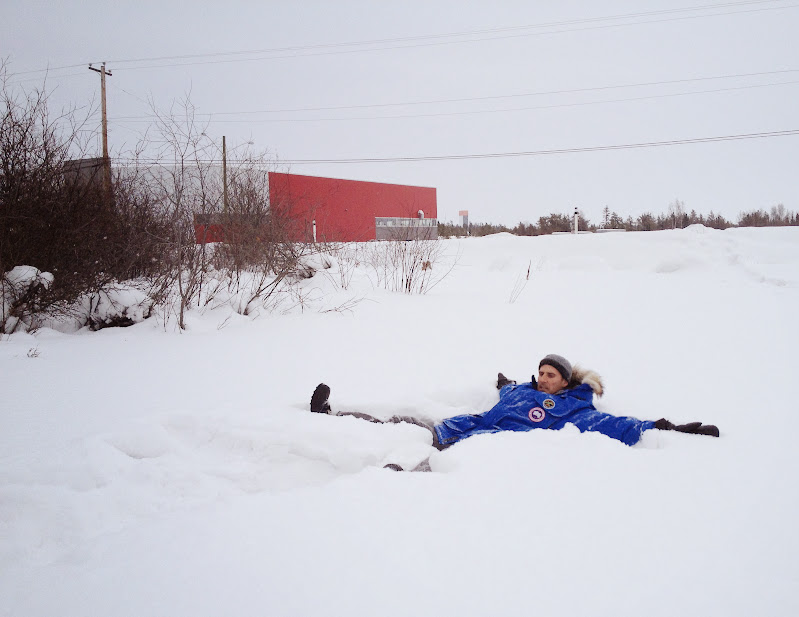 we went hiking up to the Pilot’s Monument to get a great view of the town (and more snow!), 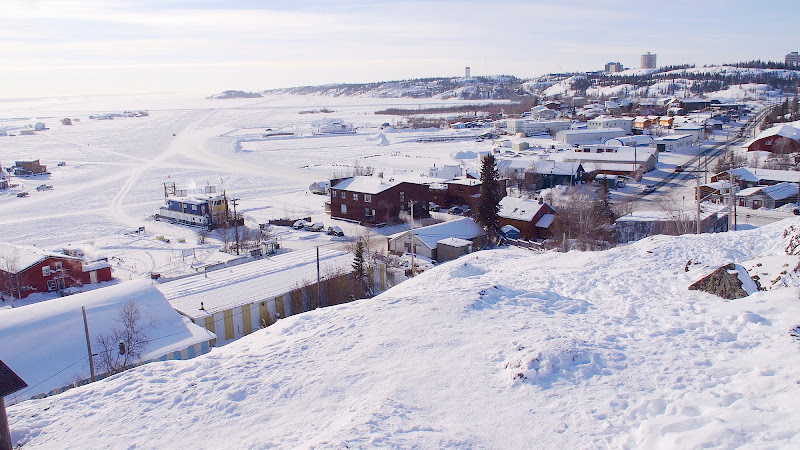 and walked all over. 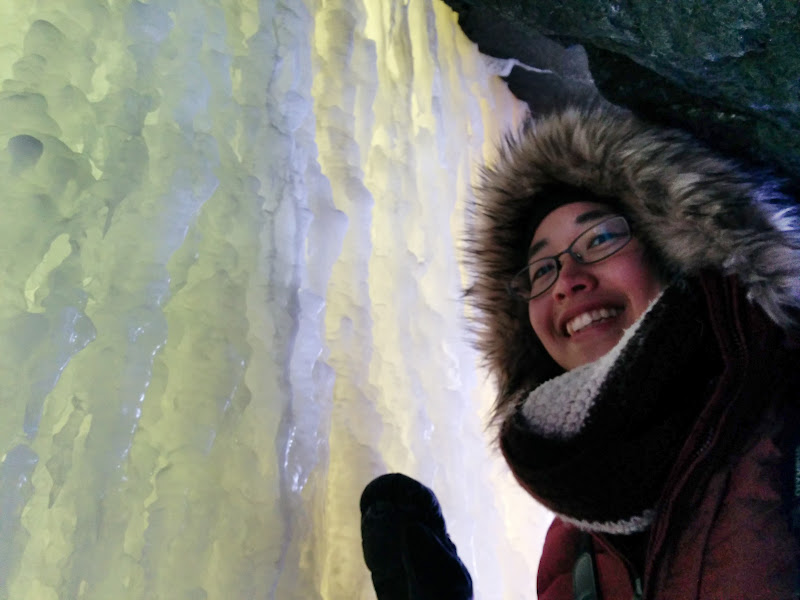 We visited an ice cave, an hour trek away from town.

Life in this town is so vastly different than what we’re used to everything was novel and exciting in our eyes: the snow (so much!), the cold (so cold!), the bush planes, the ice roads… even the license plate! 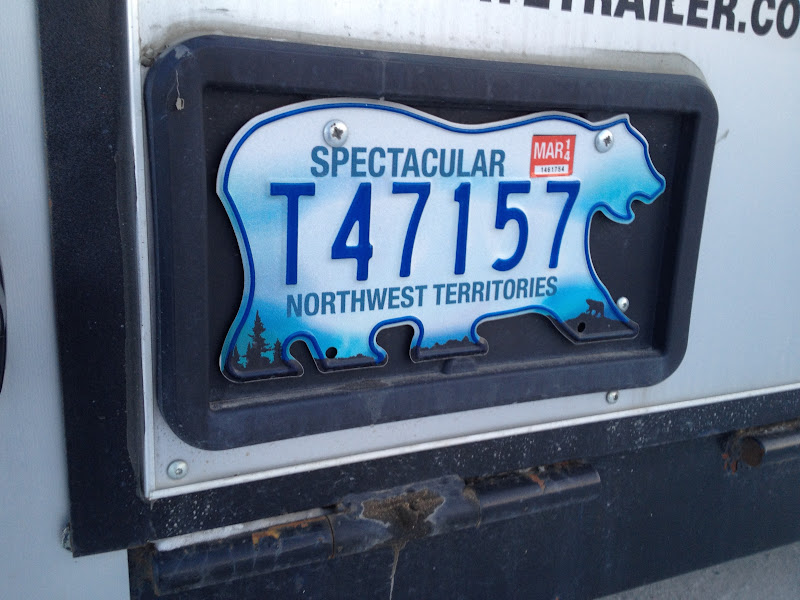 Spring time is a fun time to visit Yellowknife. The harsh winter is behind and sunshine is aplenty while the northern lights graze the night sky.

It takes a special kind of toughness and hardiness to live this far north. I don’t think we’d make it a year. How about you? 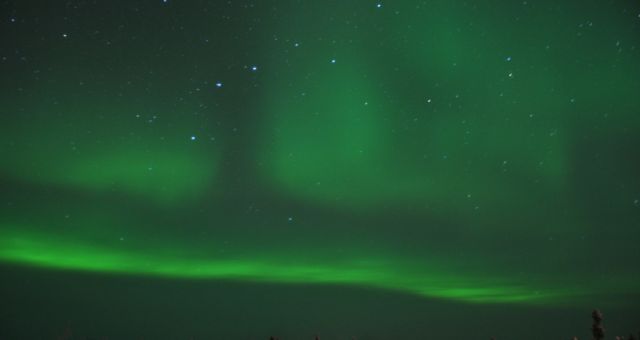