Canyoneering in Zion, Deep Into the Slot Canyons 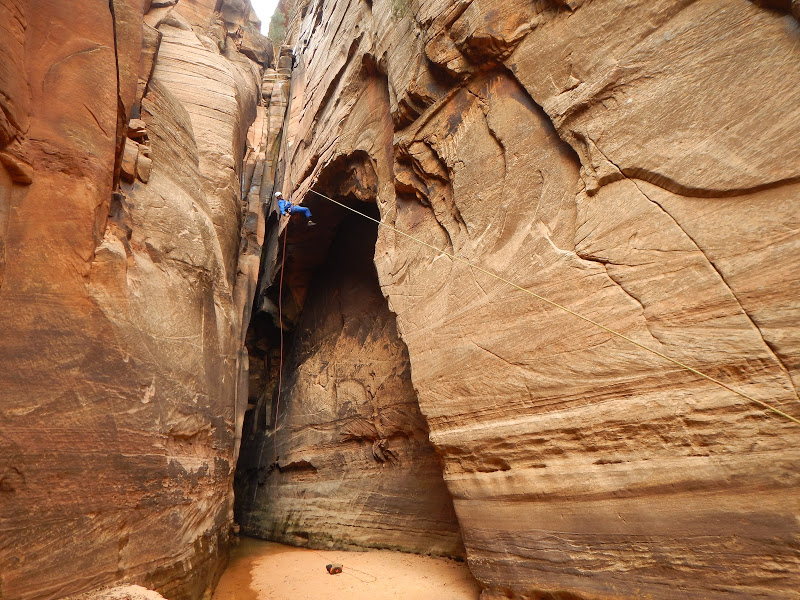 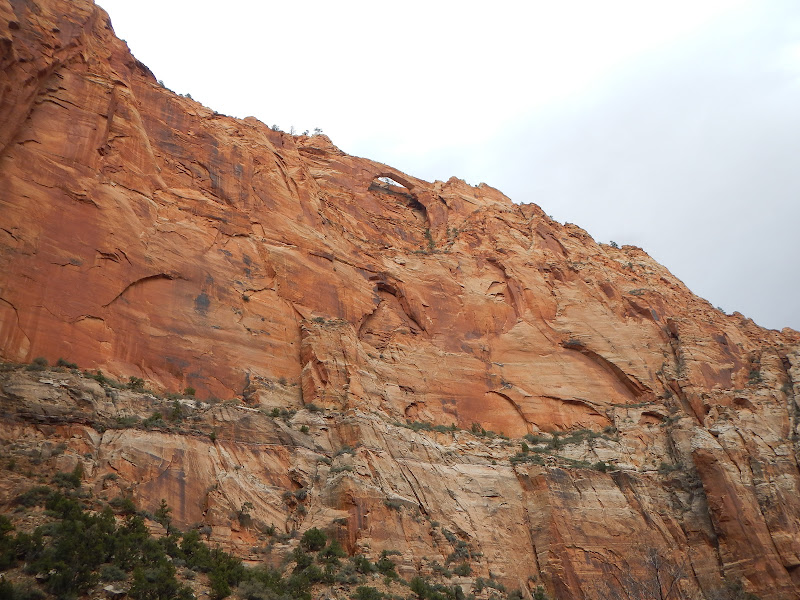 The red walls of Zion

Among adrenalin junkies, Zion is mostly known for 2 things: climbing and canyoneering (or canyoning). Notice the theme? I mean, all of those cliffs out there that make up Zion National Park – they must be useful for something. I’m not of a good enough climber to go rock climbing in Zion, but if you can’t climb those cliffs, you can at least rappel off them.

My last canyoning adventure was a few years back in Ecuador. I’d use the word ‘canyoning’ loosely here because there was no canyon per se, just one gushing waterfall after another. It was more like being waterboarded while hanging off a rope.

So I’m keen to try out a version of canyoning that doesn’t have that ‘God, I’m going to drown’ aspect. Besides, I’ve been flirting with the idea picking up canyoning as a hobby for awhile now. Zion’s famous slot canyons seems to be just the place for learning more about this sport.

The day starts out early at 7 in the morning when I met up with my canyoneering guides at Zion Adventure office. They handed me mysterious looking bundles and equipment to pack the provided waterproof backpack.

Then off we go in a van – all 6 of us, including the 2 guides. The hike to get to the top of the canyon was steep. All around us are red banded cliffs Zion is known for. 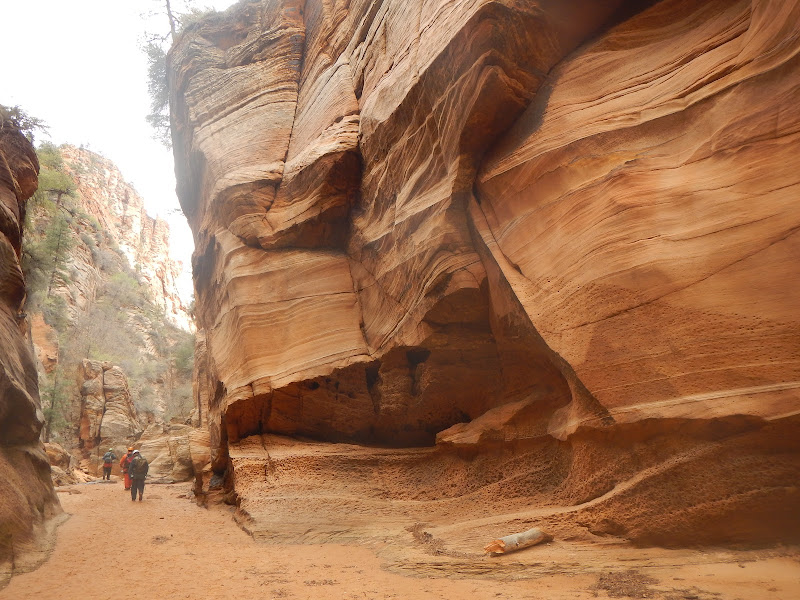 Further up and up we went. Soon we started shedding off our layers.

Finally! An hour later, we stopped and were told to unpack the mysterious bundles we’ve been carrying uphill. They turned out to be clothing made specifically for canyoning: a piece of dry suit (basically a one-piece Gore-Tex) and a coverall (to protect the expensive Gore-Tex). Along with a harness and slings.

These suits are far than flattering but very soon I learned that they serve a major purpose. 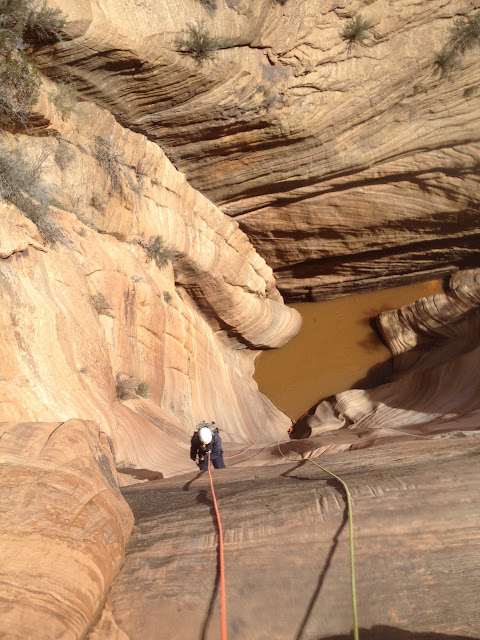 Our first rappel was down onto a water-filled pothole a with a sloping edge. I was instructed to balance on the edge of water and make my way around to a flat platform.

I would’ve done just fine if I didn’t try to grab the rope next to me. As I bent sideways, I felt my shoes losing traction and I slipped, ever so slowly, down the sloping wall, into the deep, (GASP!) cold water.

Somehow between the shock of the cold and my cumbersome getup, I couldn’t make my way out of the pool. Whenever I tried to stand up, I’d slip back into the pool again. Again. And again. Like a fly slowly drowning in a bowl of water.

Finally deciding that he’s had enough entertainment (and for fear of the company’s first ever casualty), my guide grabbed my pack and dragged me and whatever pride I had left out of the pool like one would a sack of potato.

Amazingly the dry suit, which I admittedly was very skeptical of earlier, did keep the water out of my clothes. My poor shoes and socks weren’t so lucky though.

The funny thing about canyoning is that half of the fun is the rappelling. Well, funny to me anyway. As a climber, I always see rappelling as a way to get off the mountain – as the last obstacle to warm fire and dinner at the end of a long day. Most climbers know the stat: accidents happen while rappelling. 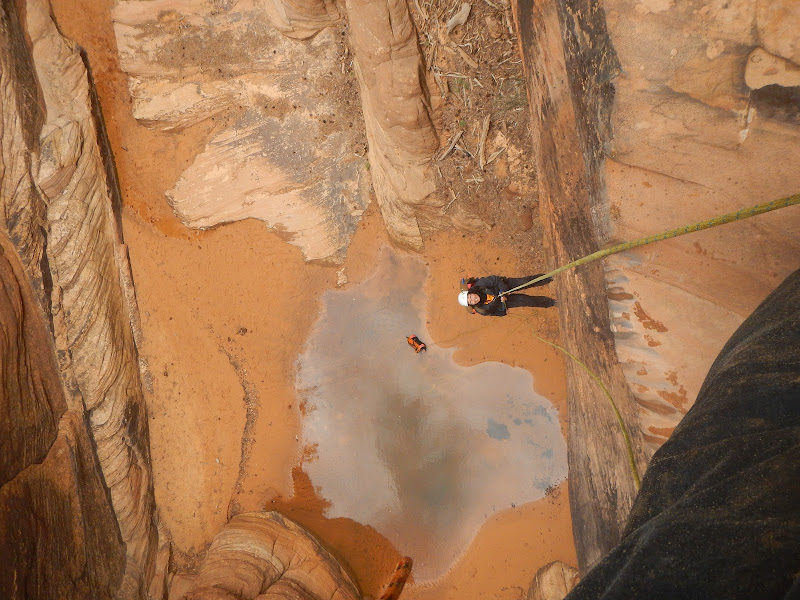 Weeee!! Rappelling can be fun.

It took a mental ‘switch’ to actually start enjoying all the 7 rappels that we ended up doing. Part of it is knowing that it was going to be somebody else’s problem if the ropes get stuck.

The other half of canyoning is wading through pools of water, navigating narrow sections, and scrambling around. This was tons of fun. 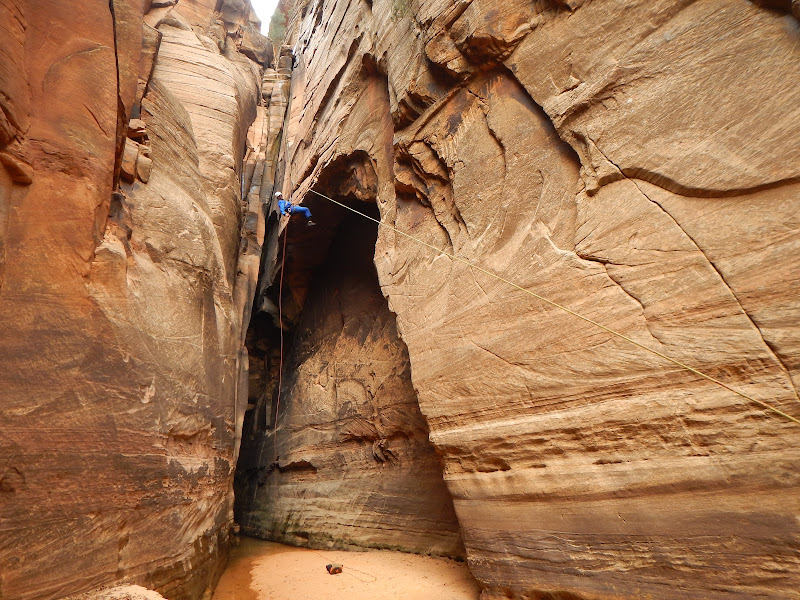 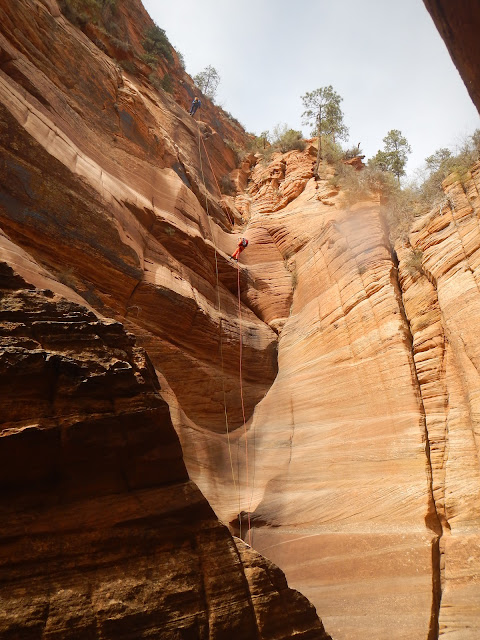 I think the tallest rappel that we did was 165 ft 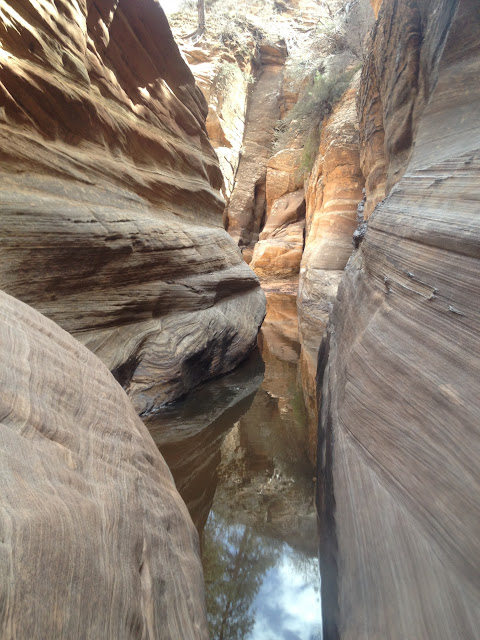 The narrow slot canyons of Zion

I learned a couple of new things along the way too. One of them is the ridiculousness and awkwardness of tandem rappel. I giggled non-stop. 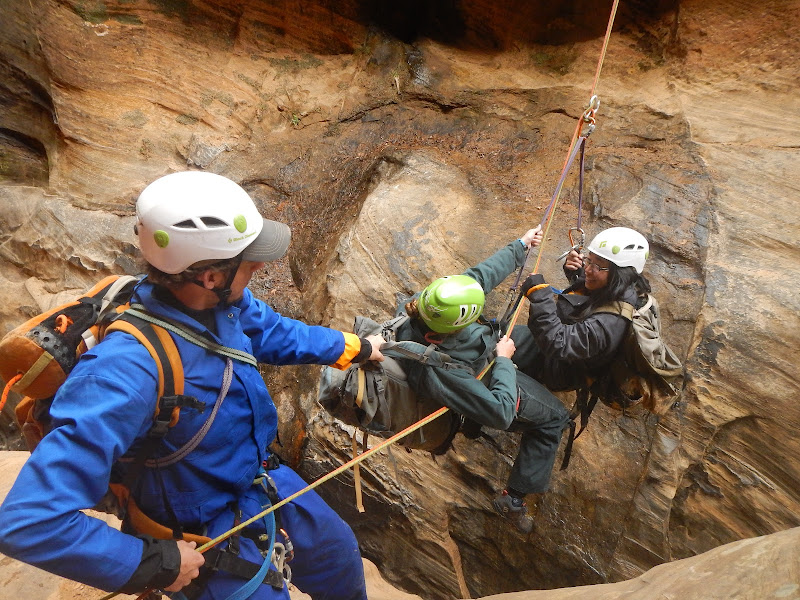 Between the rappelling, the squeezing, the scrambling, and the swimming – I can’t think of a funner way to spend a day in Zion than exploring one of Zion’s many slot canyons. At the end of the day, I decided that there’s enough similarity between canyoning and climbing that I think next time Jack and I are ready to set out on our own.

So does that mean there will be more canyoneering adventures in the future? Absolutely.

—
Have you gone canyoning before? 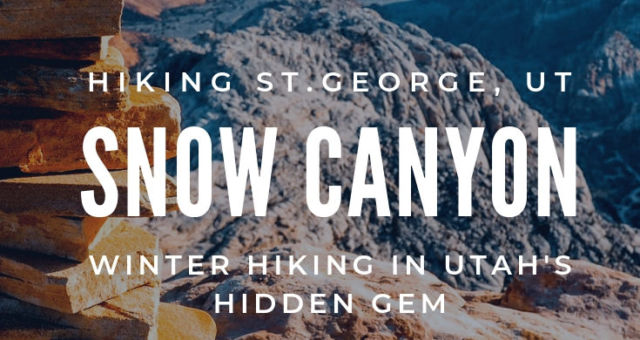 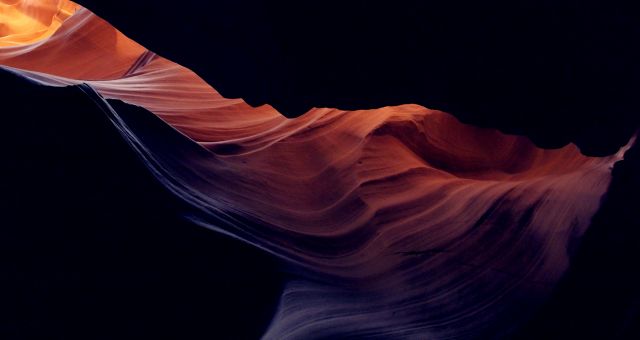 Antelope Canyon For the Win, A Southwest Highlight 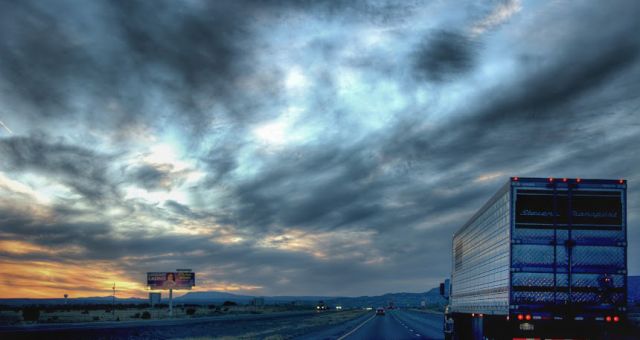