In general, I’ve been pretty lucky in all of my travels *knock on wood*. I’d never gotten sick. I’ve only been robbed once (in Chile). And the only drunk ever vomited near me got the person next to me instead.

But every now and then I encounter a string of bad lucks in one particular place that I can’t help but think that, ‘Man, this place just does NOT like me.’

In Ethiopia it all started from the moment I stepped foot in the country. I remember standing alone by the baggage carrousel in Addis airport, waiting for my luggage that never arrived. This was followed by a several mugging attempts, a bad case of bed bugs, and culminating in a rabies scare.

Feeling defeated, I left Ethiopia much earlier than planned.

I experienced a similar type of misfortunes in Castleton Tower near Moab, Utah. This 400 ft tall wingate sandstone is one of the most iconic desert towers in the Southwest. 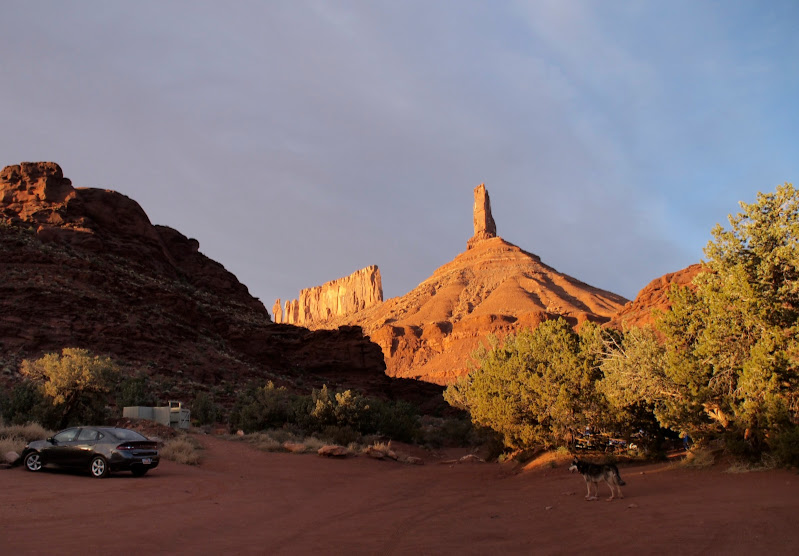 If you’re a climber, you can’t help but think, “I wonder if you can climb that… and yes, you can”

On our first attempt, we had this brilliant idea to start our approach in the evening to spend the night at the base. We decided to go light. No tent, no food. What could go wrong? 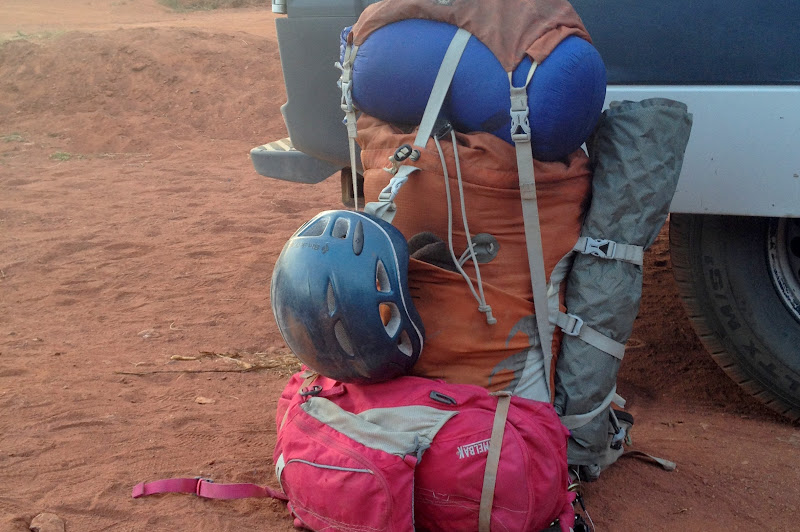 Carrying our climbing gear, our sleeping bags and pad we hiked to the saddle. 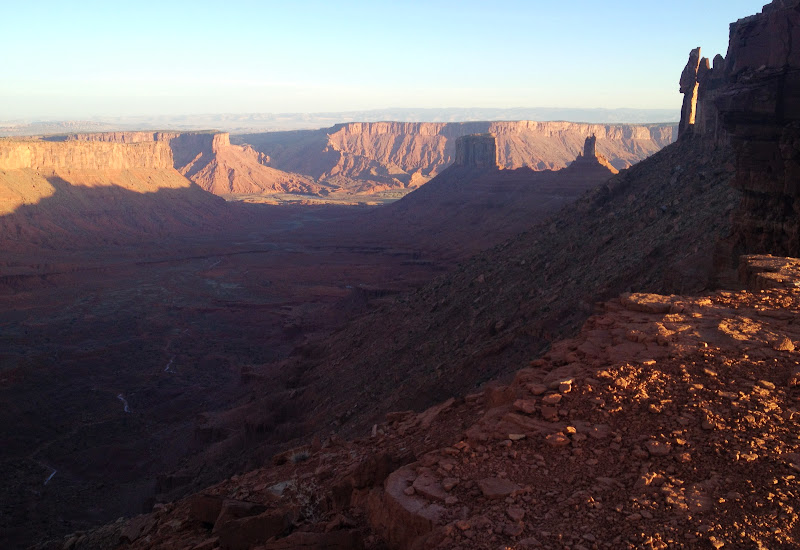 At the saddle between Castleton Tower and the Sisters, watching the play of shadows of these formations across the valley. 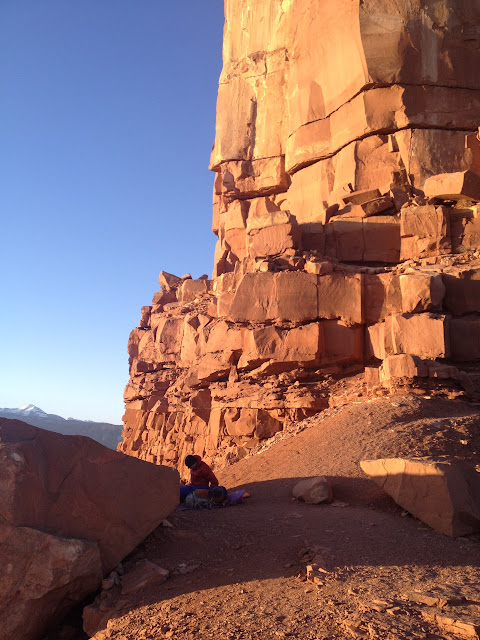 We set up our sleeping bags at the very base of the tower.

So far so good.

However, as soon we tried to go to sleep, a freak sandstorm came upon us. I said ‘freak’ because it seemed to have come from nowhere. It went from 0 to 40 mph wind in seconds. Too scared to do the approach back in the dark, we decided to stay put, hoping that it would die down.

It never did. Between trying not get blown off the cliff by the wind and the whirling sand filling every orifice from neck up, sleep eluded us. Not to mention the noise. Not to be too cliche, but the wind WAS howling. Oh, it was.

I woke up feeling that I’d just been sandpapered from my neck up. (On the plus side, my skin was smoother than ever). I was still finding grains of sands in my ear and nose for days afterward. 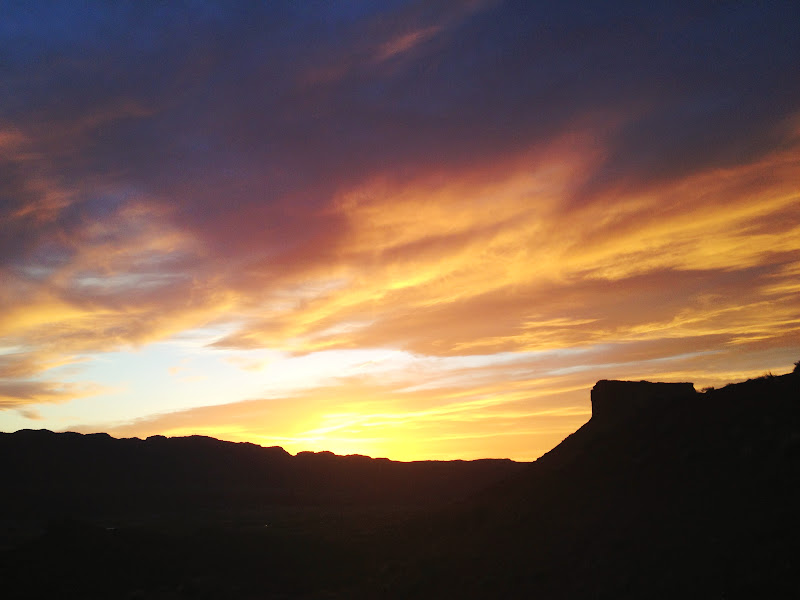 The wind was still going strong I could only imagine that it was worse at the top. Climbing didn’t seem like a good idea. After waiting for a few hours we decided to bail with our tails between our legs. But we knew we would come back. Next time for sure. 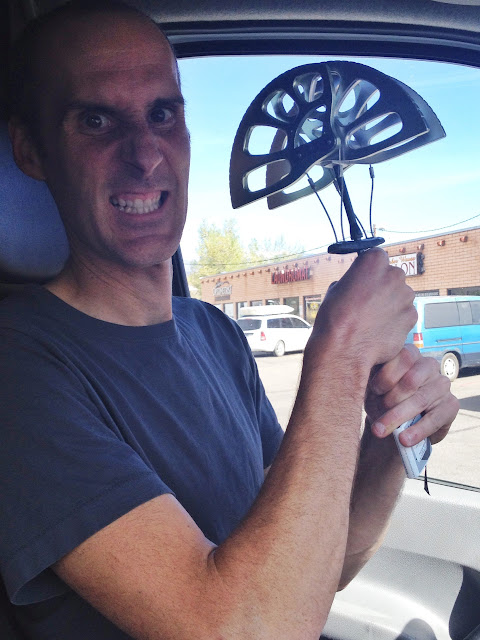 We bought a #6 cam especially for one of the pitches on Castleton Tower. We were adamant that we wouldn’t leave until we used that cam.

We returned a few weeks later. This time we managed to get to the top of Castletown Tower (via the NE Chimney – stellar route, but too short) with very little drama. I was so relieved. I still hadn’t yet learned at the time that most epics happened during the descent.. 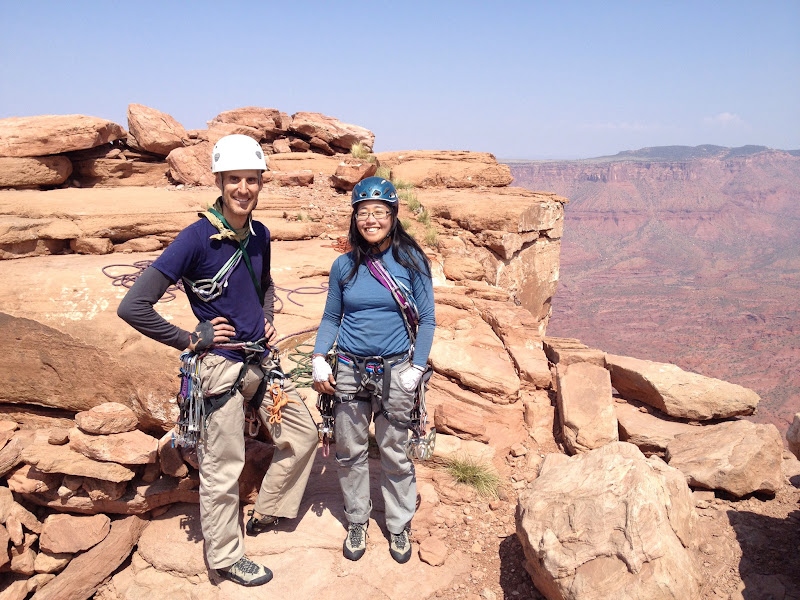 At the top of Castleton Tower

We found the rappel anchor on the northern side of the tower. In retrospect, we would’ve been better off rapping the Kor Ingalls route. There would’ve been other people to help us out since it was a much more popular route.

The first rap needed 2 ropes to get us to the next station. As soon as I secured myself to the anchor, I was pulling to retrieve the rope so we could set the next rappel down. But…

I pulled hard. I wrapped the rope around my hand and pulled and pulled as I pleaded to nobody in particular “Please, move…” I put my Grigri on and hoisted myself weighting the rope with all of my weight. Jack even pulled on my harness. The rope stretched and stretched, more than I thought it could (or should), but it was soon very obvious that it wasn’t coming down.

Our biggest fear had happened. We had our rope stuck.

Jack was going apoplectic with anger and frustration knowing that our only way out is to jug back up almost 200 ft. It’s a tiring and scary rescue endeavor. It also didn’t help that we realised around this time that Jack had left his pack on top of the tower.

We had found ourselves in a similar situation in Red Rock, Las Vegas and after since then, I always brought a Ropeman and a Grigri with us. After some trials and errors we managed to figure out a way for Jack to climb up the stuck rope the safest way possible. I was tied it to the other strand, just in case the rope frees itself as Jack is climbing it.

Cursing every single step of the way, Jack made his way to the top. It turned out that the thin and big rap rings (they were big enough to go around my arm) have twisted upon themselves and trapped the rope strands between them. 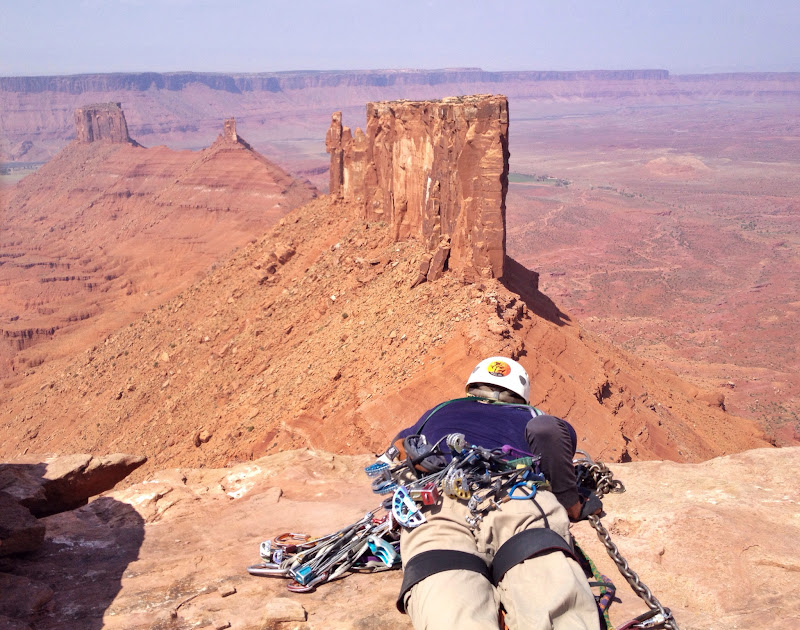 At the top of Castleton looking over our rap route on the north side of the tower. You can sort of see the thin rap ring by Jack’s elbow. Next time we know better and thread our rope through the chain instead.

Jack retrieved his bag, re-adjusted the rap setup, and rapped back down to where I was.

This time when I pulled on the rope, I felt it give. I blew a big breath of relief. I started pulling and pulling and the rope was feeding through the rings just fine. It seemed the worst is probably over. I could taste that cold beer waiting inside our van.

“The rope is stuck again!” – We looked up in horror at the free strand blowing in the wind. Out of reach. Almost out of sight. I felt sick to my stomach. This is bad.

With that loose end we couldn’t climb up again this time, not safely. If the rope freed itself while one of us was jugging up, it would run through the rings and fall to the ground, carrying whoever it is that was attached to it at the time.

Stuck midway on this massive 400ft column, unable to go up or down, I’d never felt so tiny and helpless. There seemed to be only one thing left to do

“Help, help! Anybody up there!” we started screaming. There was only silence. Well, that wasn’t quite true. There was the wind. The incessant, howling wind that made everything we tried to do just that much more difficult.

We kept on screaming our lungs out for a good 10 minutes while in the back of my mind I was running through various Plan B’s – all desperate, neither was 100% safe.

It wasn’t late enough in the day, surely there were other people summiting the tower? I feared the wind carried our voice away and nobody could hear us. When a head finally popped up over the edge of the tower, I almost cried with relief.

We didn’t need to explain. He understood immediately our predicament. Soon after, we saw the rest of our rope hurtling towards us, free from whatever obstruction it encountered. We didn’t know what this person looked like (or even if he was a ‘he’), but my gawd, we owed this person so much.

Finally back at the base of the tower, we quickly packed our stuff and left. We were eager to get back to the van and discuss our misadventures over lots and lots of beer.

Unfortunately, it wasn’t quite over.

I was going down the loose trail fast, trusting my legs to catch me. If only I had remembered that I was wearing a new pair of shoes, I wouldn’t have trusted my feet as much.

As I jumped down from a boulder I felt my foot slip inside my shoe. Before I had a chance to correct myself, my body and my pack’s momentum carried me downward and sideways and next thing I knew I was sprawling on the trail.

Soon after my ankle exploded in pain.

At first the pain was so intense that I couldn’t breathe. I was afraid I’d broken it. It’s funny the kind of thoughts that run through your head in moments of crisis. At that time I remember thinking whether or not I’d paid our health insurance premium.

But thankfully after a few minutes the pain receded to from sharp to manageable throbbing. I gingerly tried to move my foot. It hurt like hell but it moved. I was convinced that I only sprained it.

Jack carried my pack as I gingerly limped and hopped the rest of the way back. It took us 3 hours to get back to the van. By that time my ankle has swollen to the size of an avocado (never having a sprained ankle before, I found all of this fascinating.) 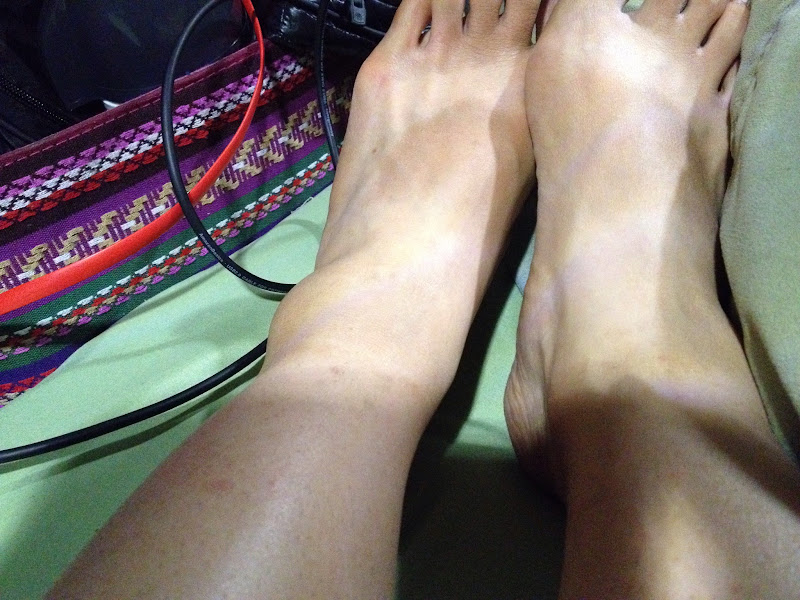 My ankle is already looking better the next day

Despite the pain and the scare, it was hard to complain too much. It seemed that the universe wanted to remind us that mountains demand respect regardless how often we go outside adventuring. It’s a good lesson to keep in mind.

Oh, adventures! They sure make the best teachers.