When K, my Couchsurfing host in Seoul, invited me to go hiking Bukhansan Mountain, I agreed to tag along. “It’s just a small day hike out of Seoul,’ she said. There were 2 others beside K and I on this supposedly little hike: L, another ESL teacher in Seoul, and Sunny – a Korean girl whose personality fits her nickname to the tee.

I wasn’t taking this Mt. Bukhansan hike, the highest peak in Seoul, as seriously as I should’ve. But I really have some good reasons why. Let me explain:
1. It was a last minute trip haphazardly planned.
2. More importantly, I mistakenly thought we were doing this hike (Seoul Fortress Wall of ‘Bugaksan’ hike) which didn’t sound intimidating at all. 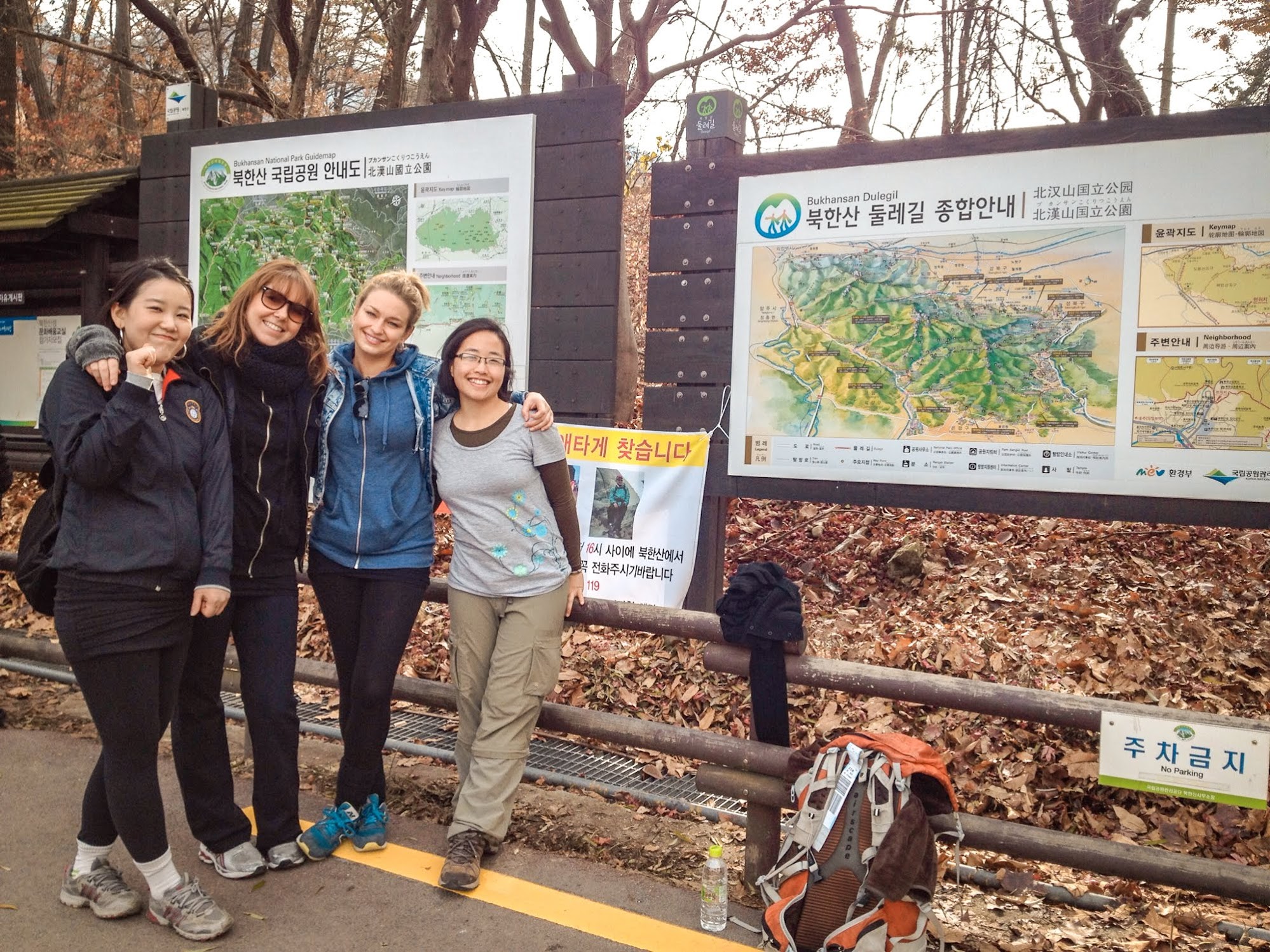 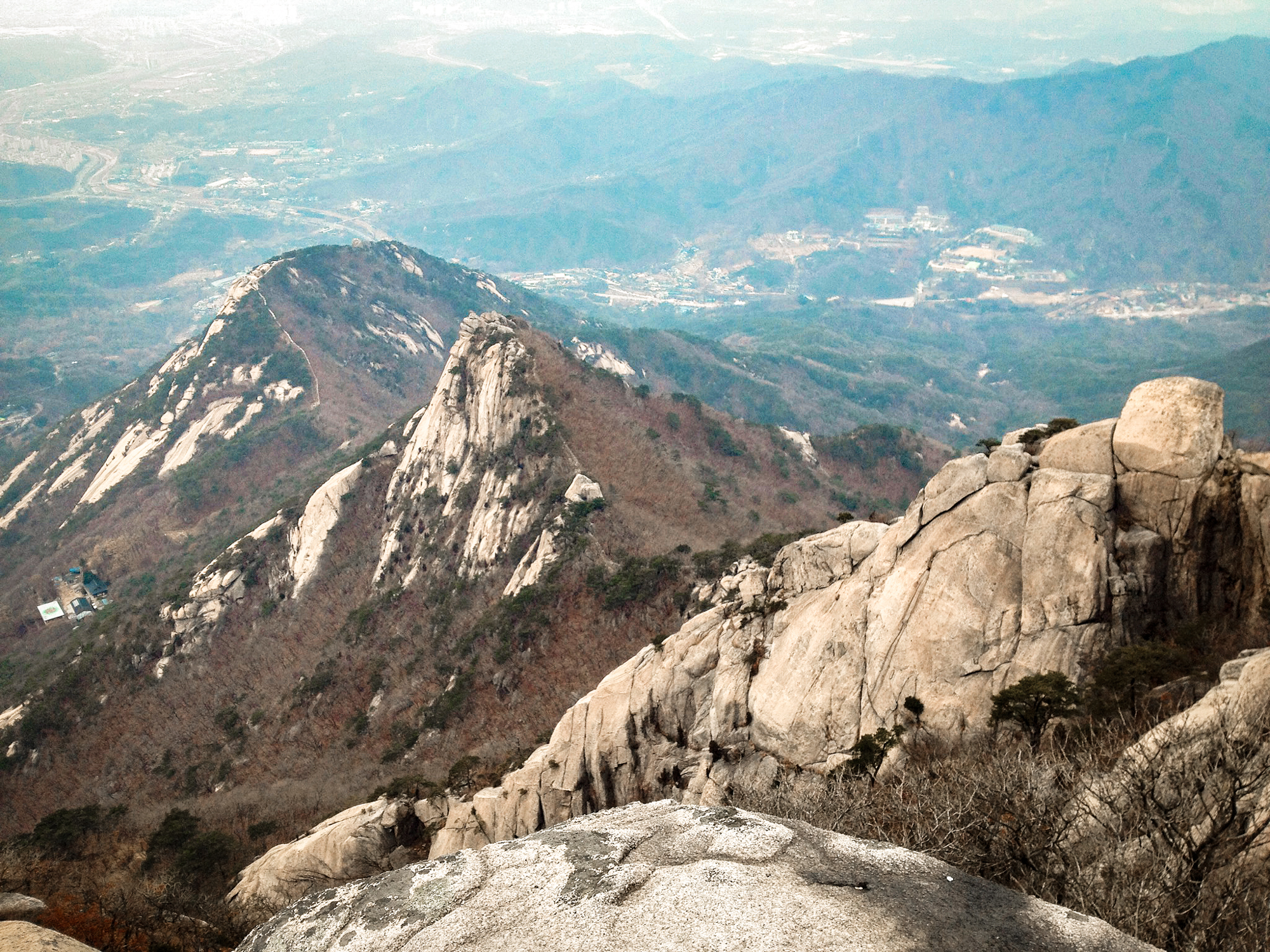 The view is getting better and better as you get higher and higher.

Climbing Seoul’s highest peak – “How hard can it be?” 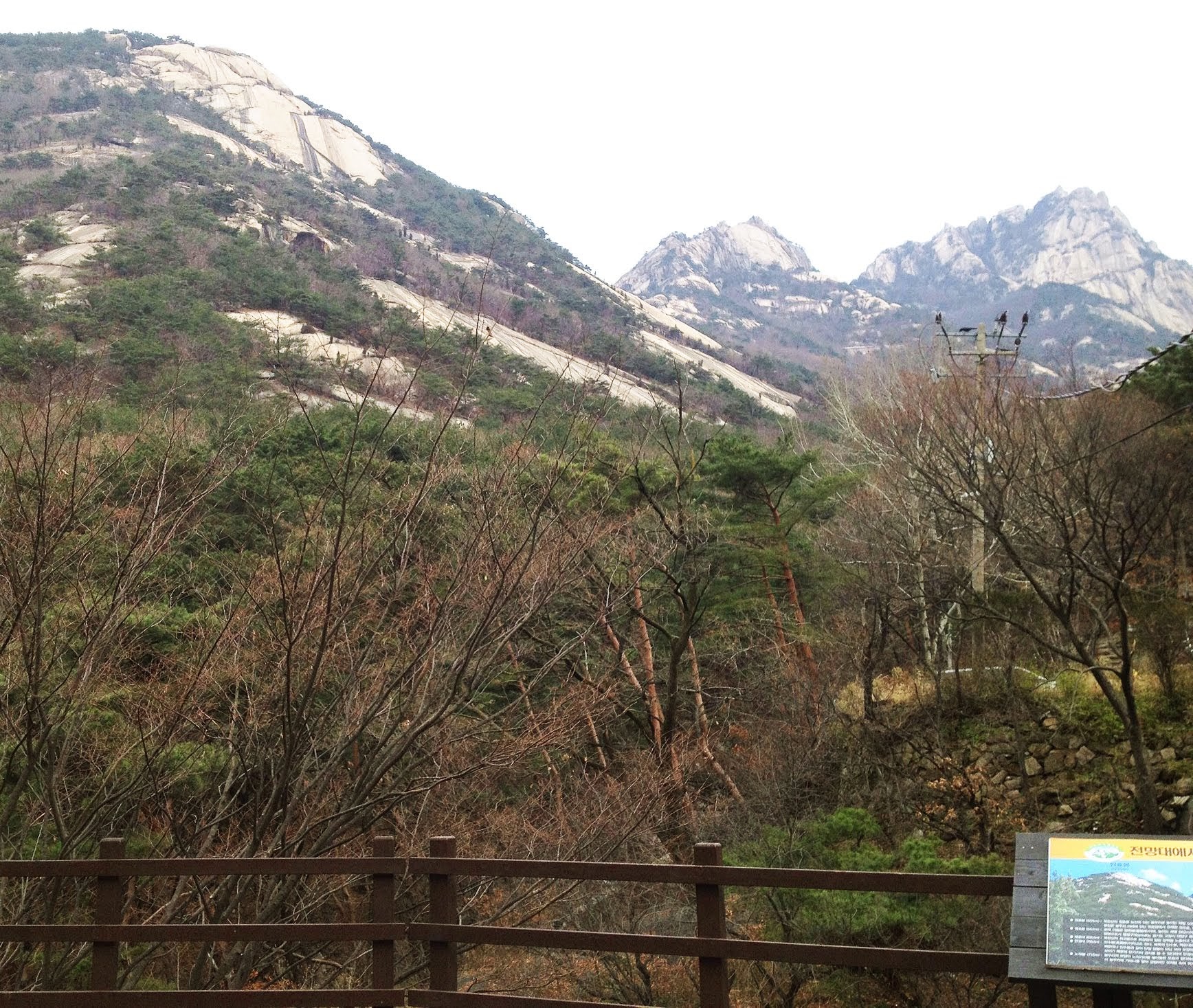 Baegundae Peak Peak is the one on the right

You might not realise it at first, but South Korea’s capital is surrounded by 37 easily accessible mountains. Many of them is only a subway or bus ride away including Mount Bukhansan, our target for the day. This mountain is located in Bukhansan National Park, a much needed green lung that boasts granite peaks and river gorges. The fact that this great outdoor playground is just a subway ride away from Seoul makes hiking Mt. Bukhansan an easy day activity from Seoul. So popular in fact that it’s listed in the Guinness Book of World Records as the “Most Visited National Park per Unit Area” (reference).

Mt. Bukhansan is a mountain of many peaks. While we’re here, we might as well climb the tallest one, Baegundae Peak, that stands at 840 m (or 2700 ft). Even though there are multiple paths to get to the peak, the most popular one is called Bukhansanseong Trail. We decided to get the full “Korean” experience and joined the throngs of colorful ajummas on this trail.

The first half of the 3.4km (2 mi) the Bukhansanseong Trail was mildly steep. One might rejoice at this, but that only means that the second half was torturously steep. The last 1/4 of the trail consists of cables set up to help hikers pull themselves up, stairs, and steps hewn into rocks. The rocks and the metal cables were so cold they were painful to the touch. It was tough going.

I thought it would never end.

There’s one thing you should know: older South Koreans LOVE hiking. That’s ‘love’ with all letters capitalized. They come in droves on weekends to popular trails dressed in bright GoreTex jackets, matching backpacks, titanium hiking sticks, and enough accessories to survive a snowstorm.

We went on a Sunday which was a mistake in its own part. Mt. Bukhansan is one of the most popular day hikes from Seoul and the trail was packed. I practically had my nose up somebody’s butt at all times. And they are sooooo aggressive – and so fast. In areas where we had to scramble on hands and feet, my hands narrowly missed getting stabbed by hiking sticks. 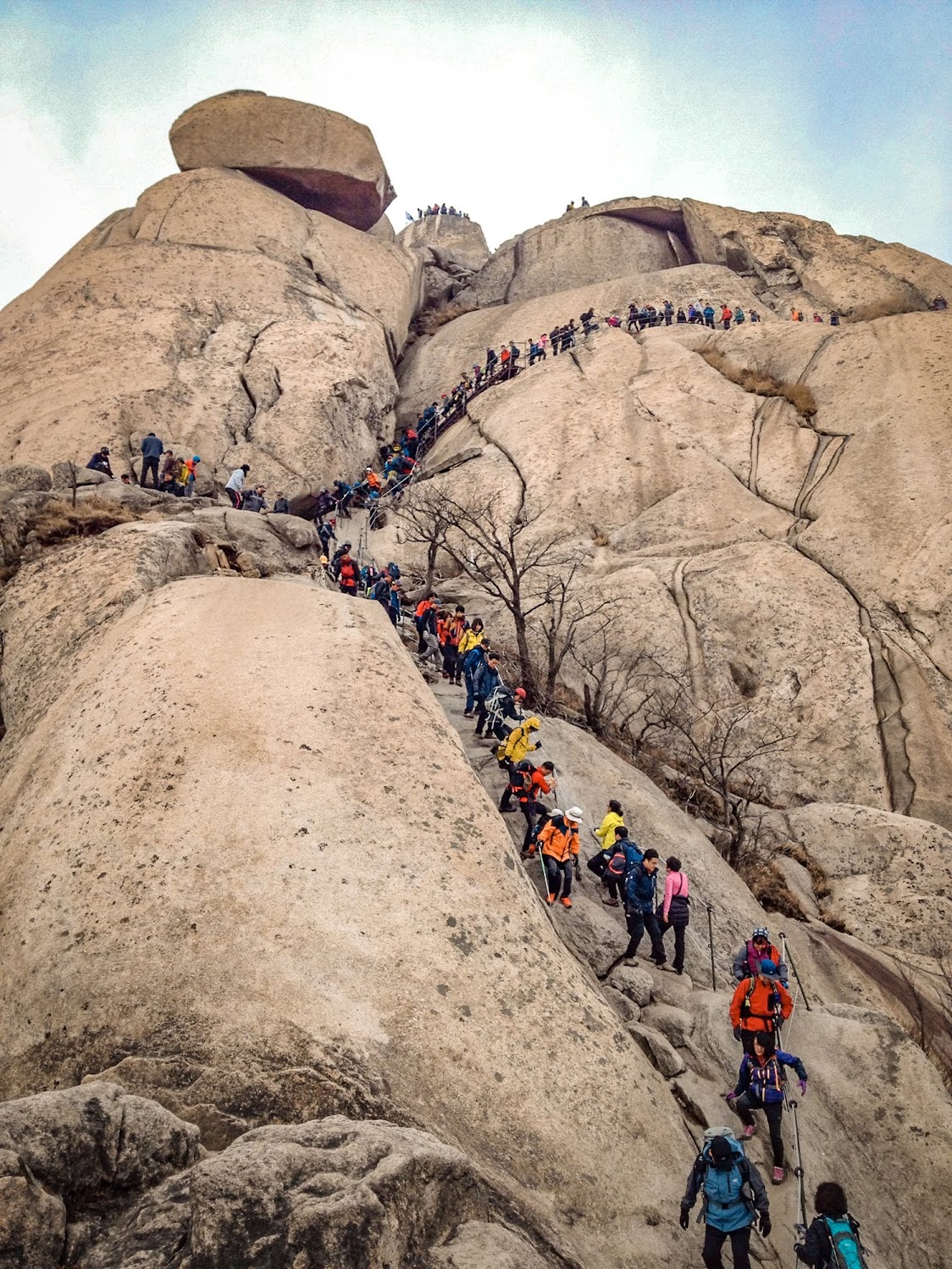 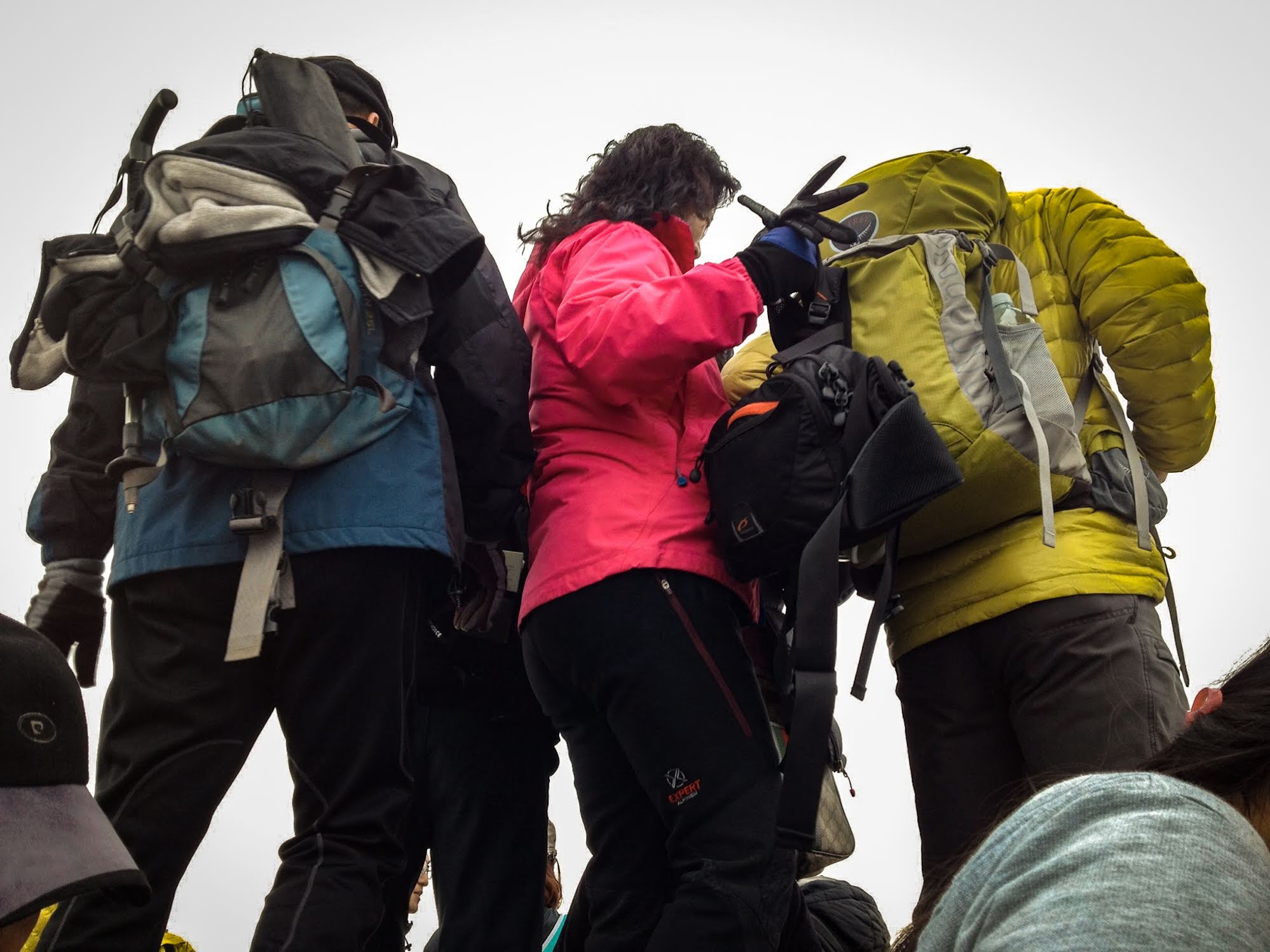 Fighting for space on the summit block

The view from Baegundae Peak

After 2.5 hrs of huffing and puffing, I got myself to the top. The view was inspiring despite the day being far from ideal: it was cloudy and grey. We could see the sprawl of Seoul and other peaks of Mt. Bukhansan. 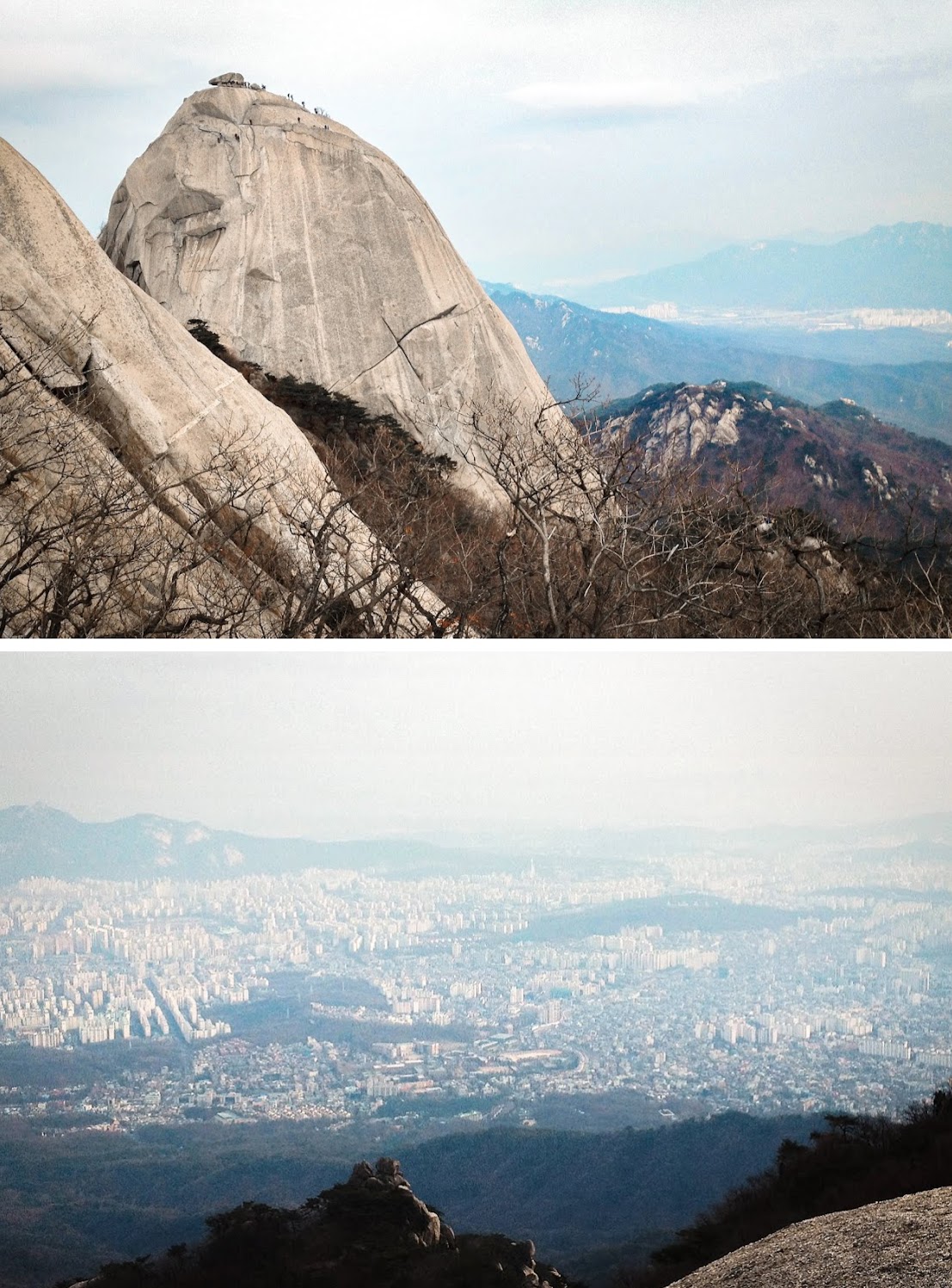 View of Seoul from Bukhansan

Around the summit people were eating in groups enjoying the view. Instead of the usual hikers’ fare of granolas and Cliff bars, they were munching on rolls of sushi, hot bowls of ramen, and sharing hot cups of tea. Watching them I came to the conclusion that Koreans sure know how to hike. It was really inspiring in a way.

Carrying hot water all the way up this mountain? The idea might seem crazy, but oh it seems so worth it to be able to get your hands around a hot cup of drinks. 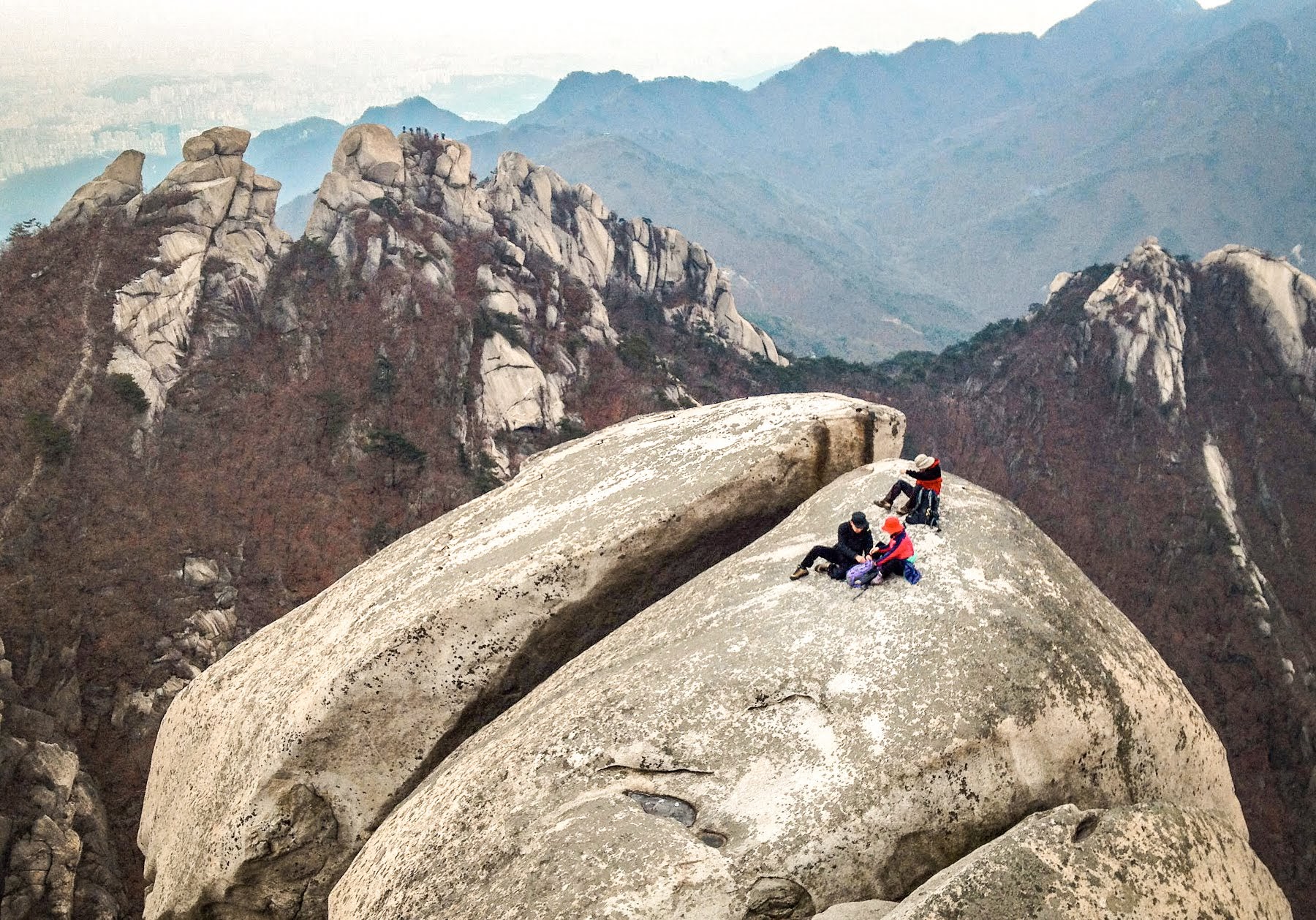 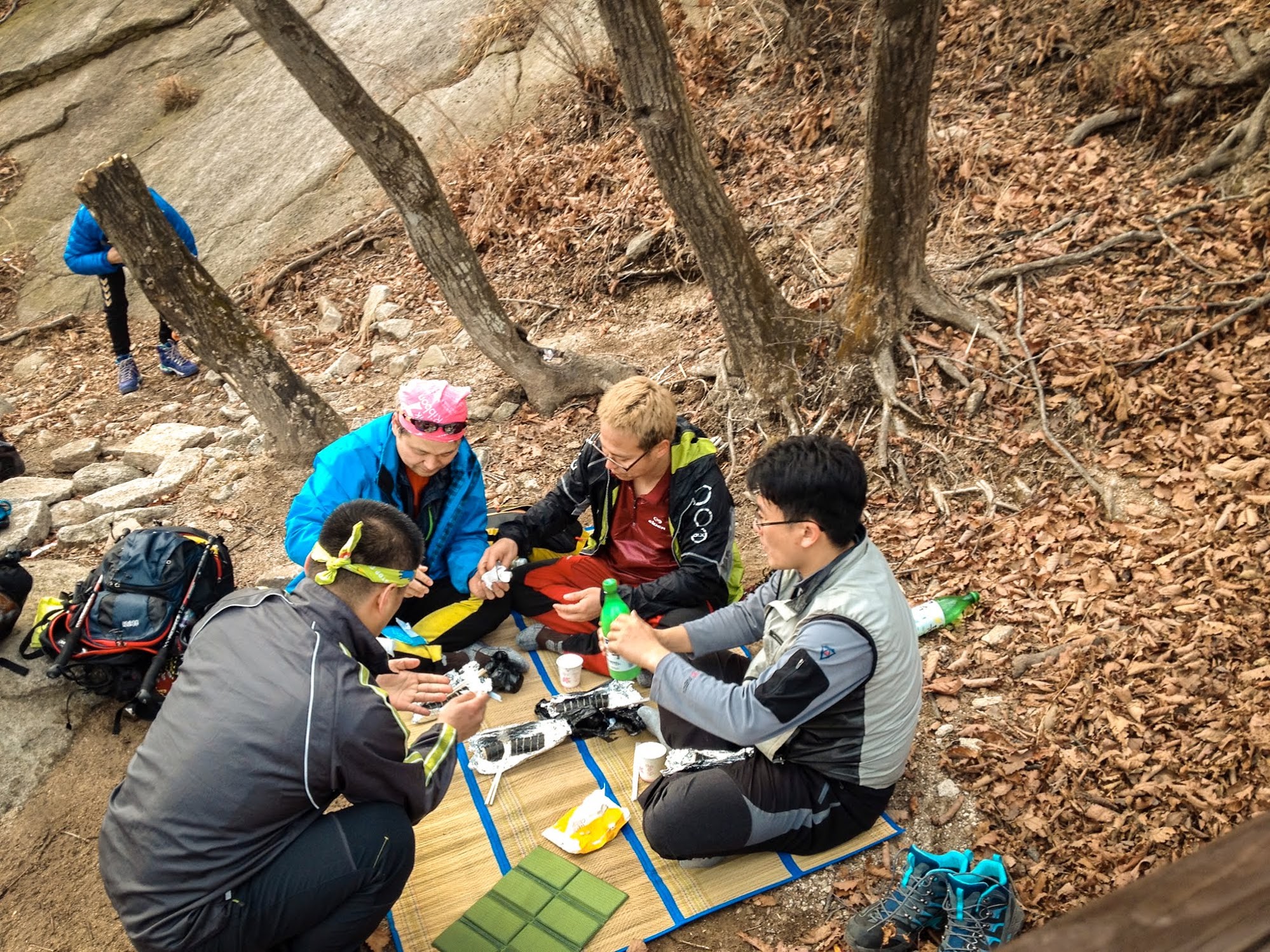 How Sunny Saved the Day 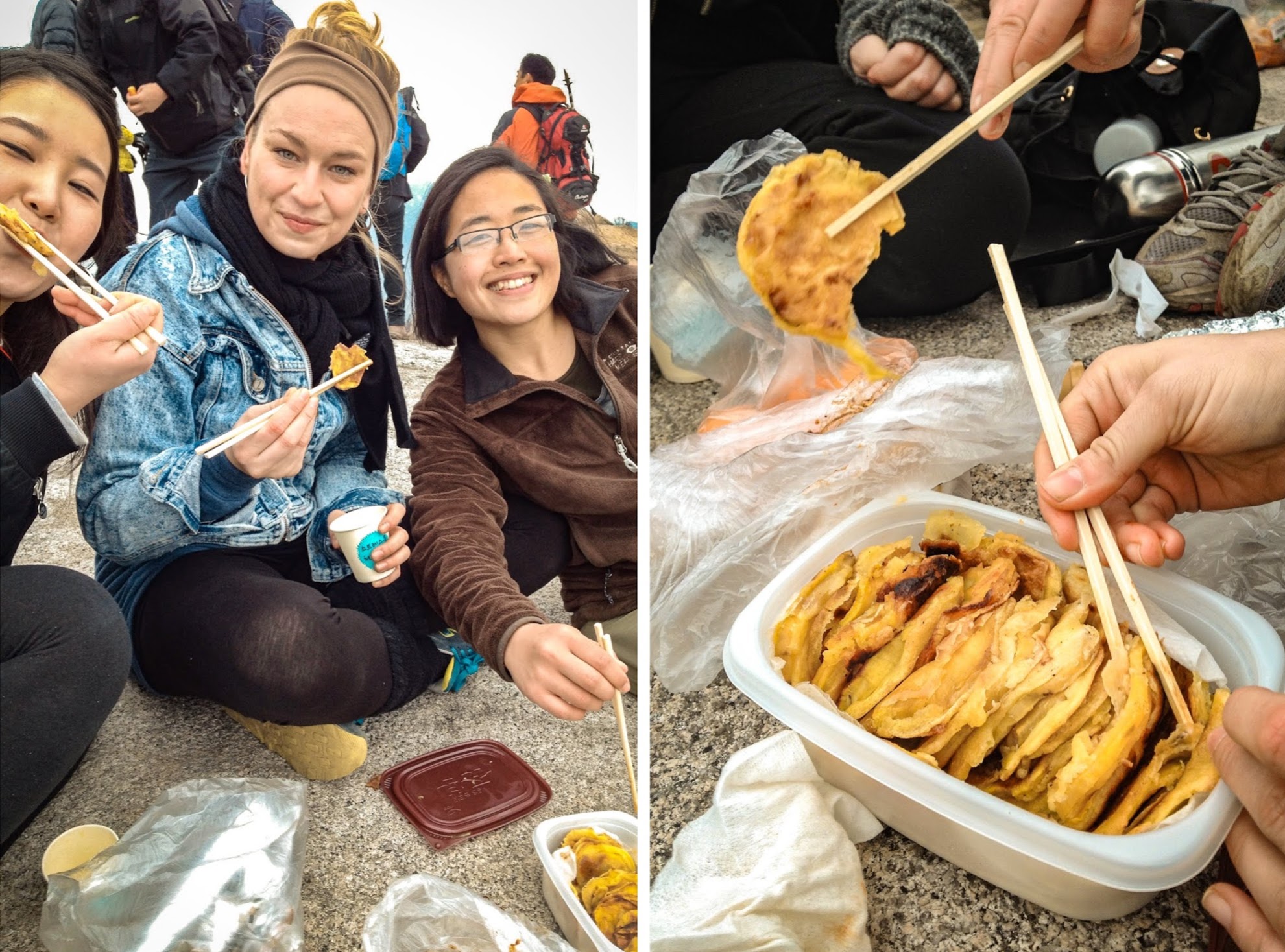 Thanks to Sunny, we didn’t starve on the peak.

Even after finishing all the food I brought, I was still so, so hungry. And cold. I was resigned to the fact I’d be climbing down hungry and cold.

Then Sunny opened her backpack and pulled out containers of fried sweet potatoes (complete with condiments), a thermos of hot tea, and paper cups. Enough for everybody. I looked at her with amazement. I think I shed some tears.

I want to take Sunny wherever I go hiking in the future.

The drunk hike down Mt. Bukhansan

On the hike down we chose a different, shorter route that happened to pass a small restaurant selling Korean rice wine, makgeolli. Somehow the group was convinced (who convinced who? It was all a blur) that getting a buzz on would make the climb down faster. “It’s the tradition”, L said. “You go up a mountain, get drunk, and hike down”.

I looked at Sunny, the only Korean of the group, for confirmation. She just shrugged in that universal gesture of “I don’t know what they’re talking about.” But in we went and we shared a couple of bowls of makgeolli. It definitely helped me warm up from the inside. I felt recharged. 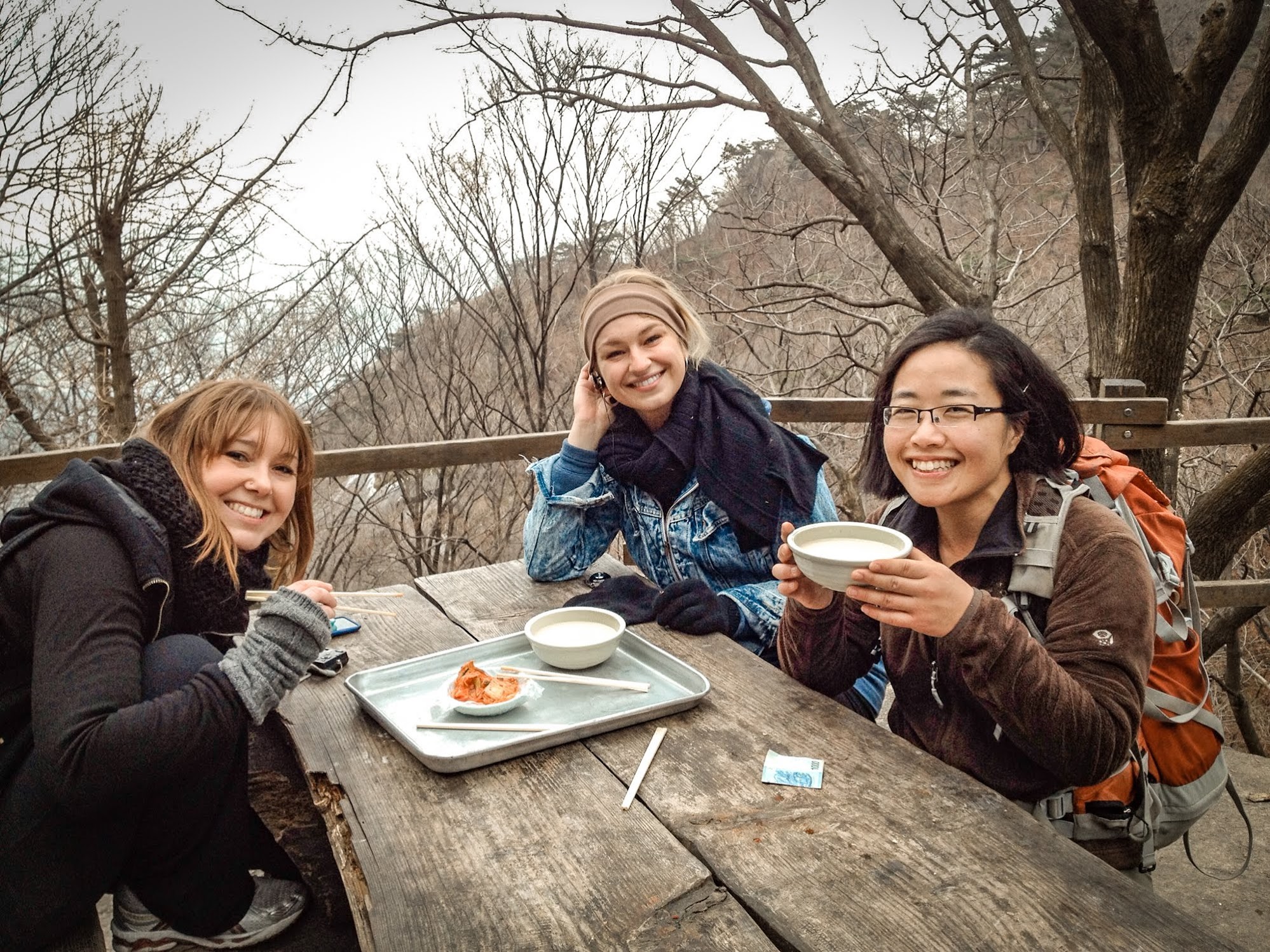 So with a nice buzz going, we tackled the knee breacking hike down. K and L ran past us giggling all the way down, products of many hours on the gym and fueled even further by the rice wine. Sunny stayed back to keep me company (did I mention how much I love this girl?) while I stumbled and slipped my way down the mountain. The makgeolli did help me go faster, just not in a way I thought it would.

When we finally got to the Visitor Center, euphoria set it. We just climbed Seoul’s highest peak. Woot! We’re so hardcore! As usual, despite the pain, I’m glad I pushed myself and made it up the peak. 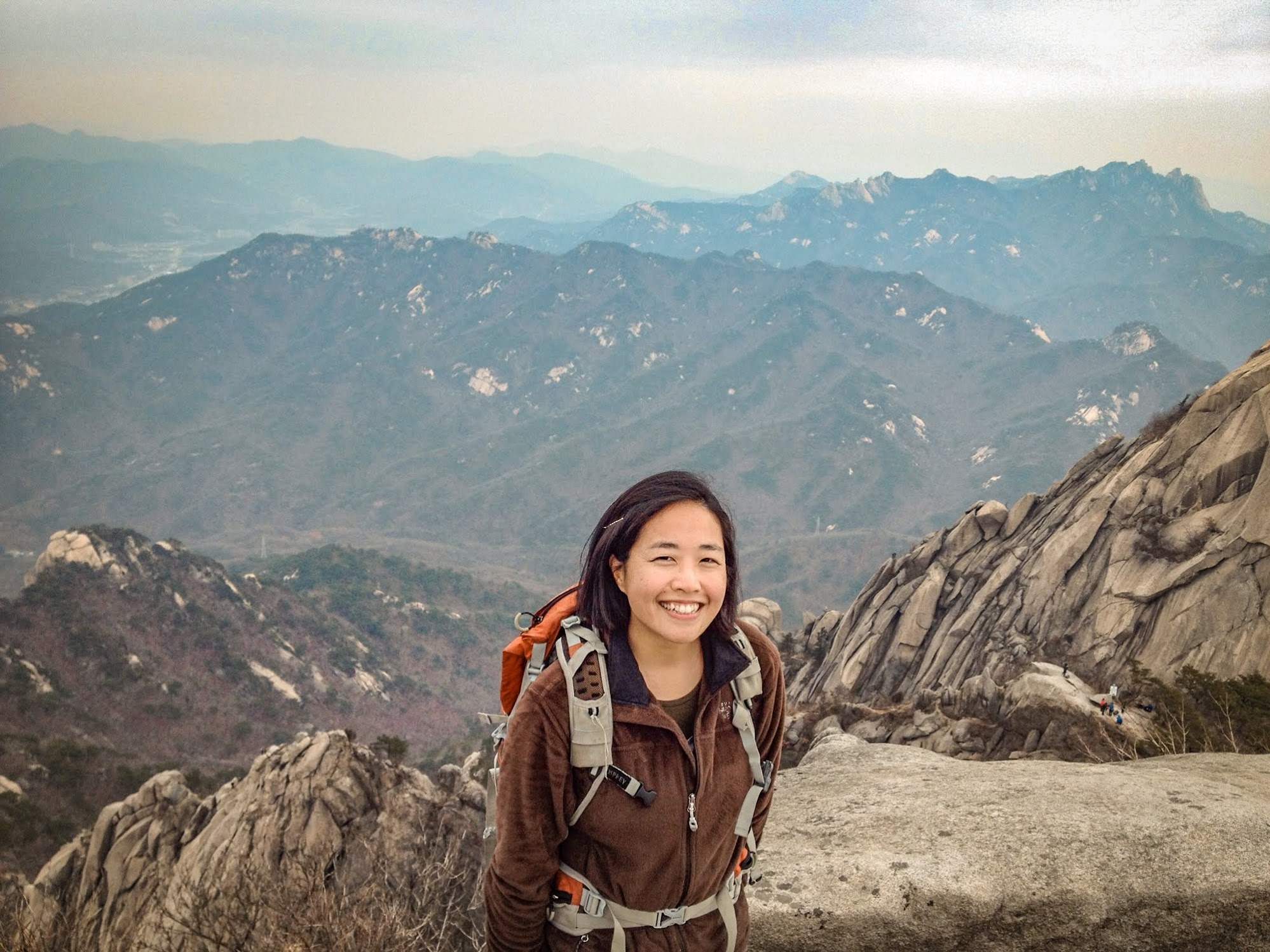 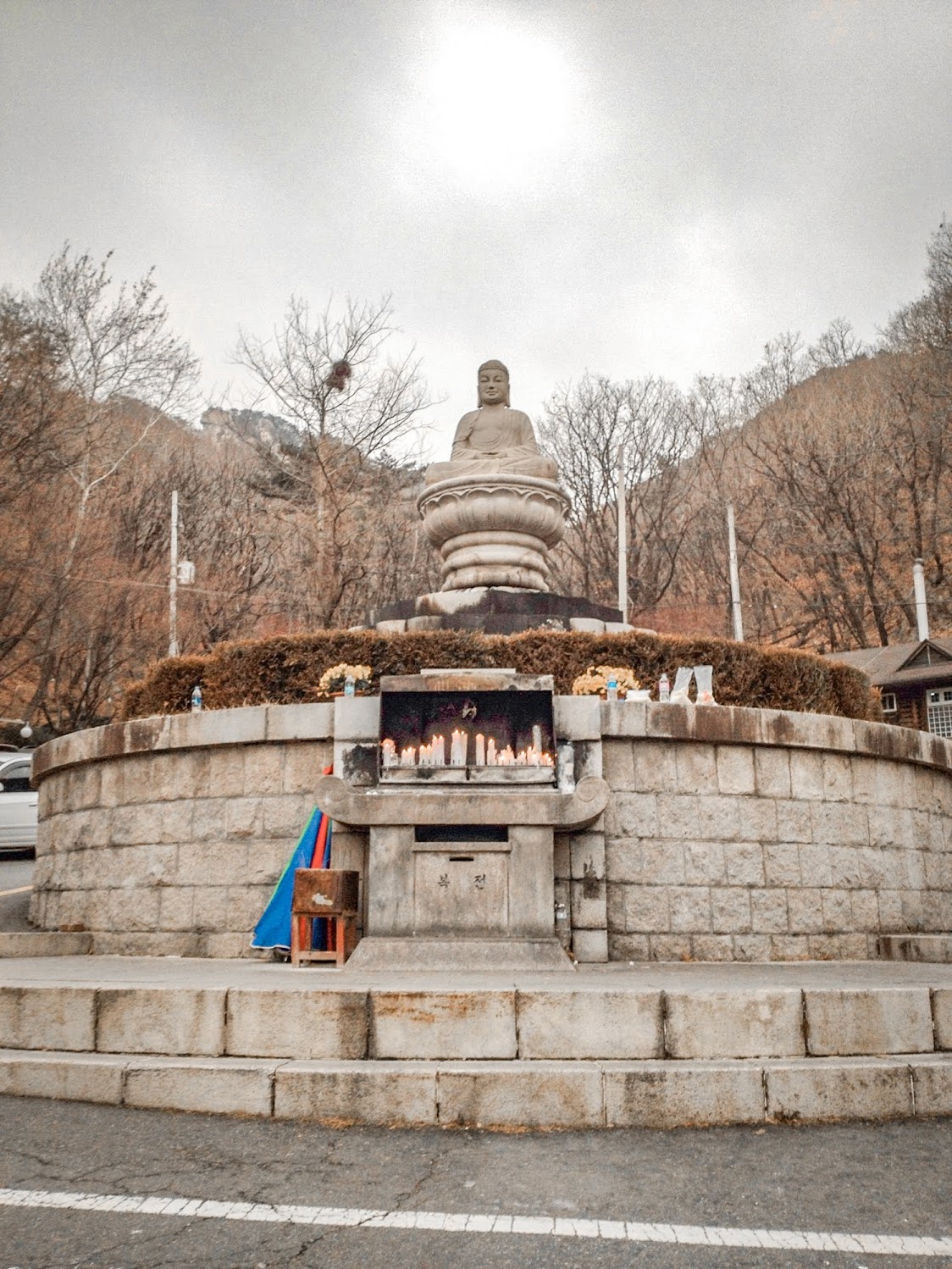 Statue of Buddha at the end of the hike

How to get to Mt. Bukhansan by Subway:

Best time to go: Avoid the weekends because of the crowd.

Recommended Tour: I’m all about doing activities independently whenever I could, but sometimes, due to time restriction, it makes more sense to join a small tour. This Viator tour takes you to this same hike AND includes a visit to a traditional Korean spa (jjimjilbang) afterwards.

Where to stay: I couchsurfed while in Seoul, but there are plenty of budget accommodations in Seoul. Click here for a list of places to stay in Seoul.

Read more about my trip to South Korea: fishing village of Sokcho, trying Korean spa for the first time, and Seoul’s tips and highlights.