Before we came to Wyoming, I’d never heard of the Cirque of Towers. Or the Wind River.

Now that we’ve gotten a taste of it, I hope to return to this place again and again in the future. Even after spending a week among these granite giants, we’ve barely scratched the surface.

The Wind River is part of the Rocky Mountains in Western Wyoming. Guarded by long approaches (and not being a National Park), it is much less visited than its much crowded (and in my opinion, less impressive) neighbors, the Tetons. 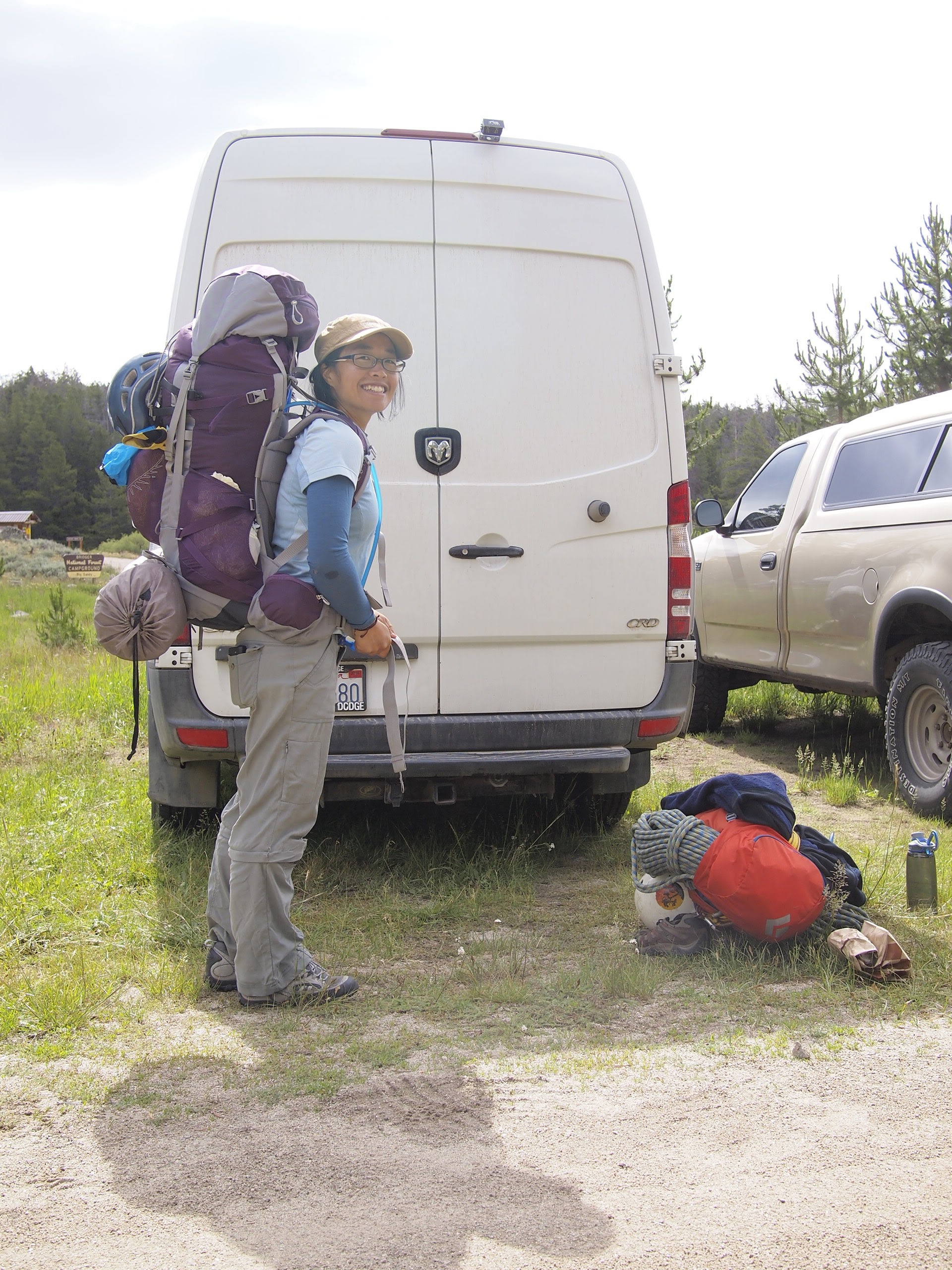 I bought a new pack for the trip since we couldn’t fit everything we needed in our 2 small packs. At 50L it’s the largest pack I’d ever owned. 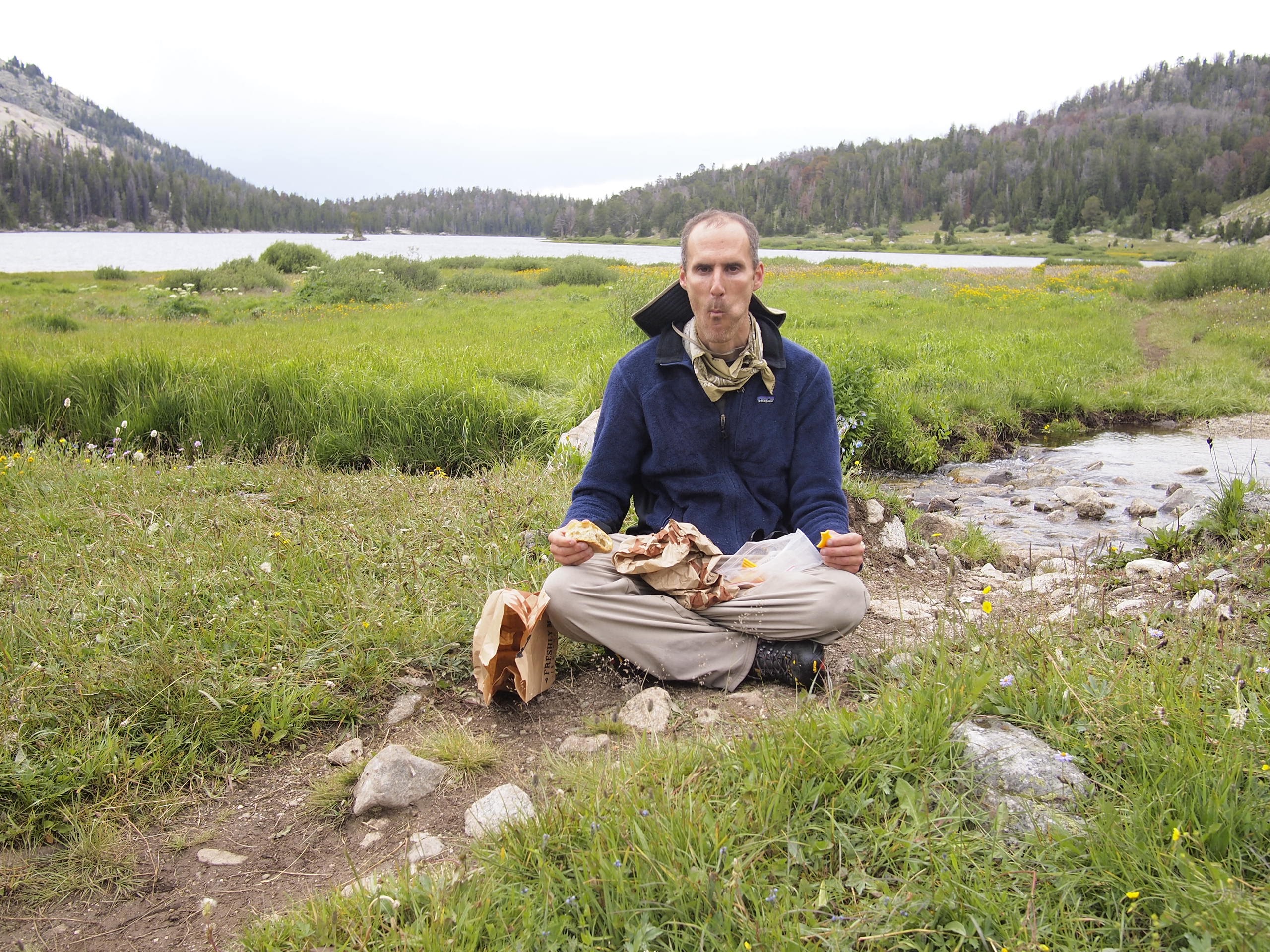 When you’re on a trail and just can’t wait to have a snack.

It’s not to say that the Winds receives little visitors as proven by the various (large!) groups of backpackers we’ve come across. Its popularity is also its downside. A local told us that the Cirque ‘has been loved to death.’ Lonesome Lake was the first lake in the Winds to be declared unsafe to drink because of fecal contamination. Eeew!

(Going potty above the treeline can be problematic. There’s often little precious dirt to dig. We’ve used something like this in the past. Learn to love it!)

This is our first visit to the Winds and we set our sight on Pingora Peak. One of the many in a collection of peaks known as the Cirque of Towers. The climb is supposed to be pretty mellow. The granite sticky. The descent straightforward.

For me, the approach was the crux. The hardest part of the whole experience.

The 10 miles hike to the base of the Cirque of Towers was tougher than I expected. The heavy pack cut into my shoulders. Then it started to rain and my glasses fogged up. The wind started to pick up and my big pack acted like a sail, throwing me off balance at every gust. Not a good thing to be happening when you’re navigating your way in a giant boulder field.

It was, in short, exciting. Our first day it was drizzly and cloudy. So we just hung around the campsite hoping that the next day would be better. 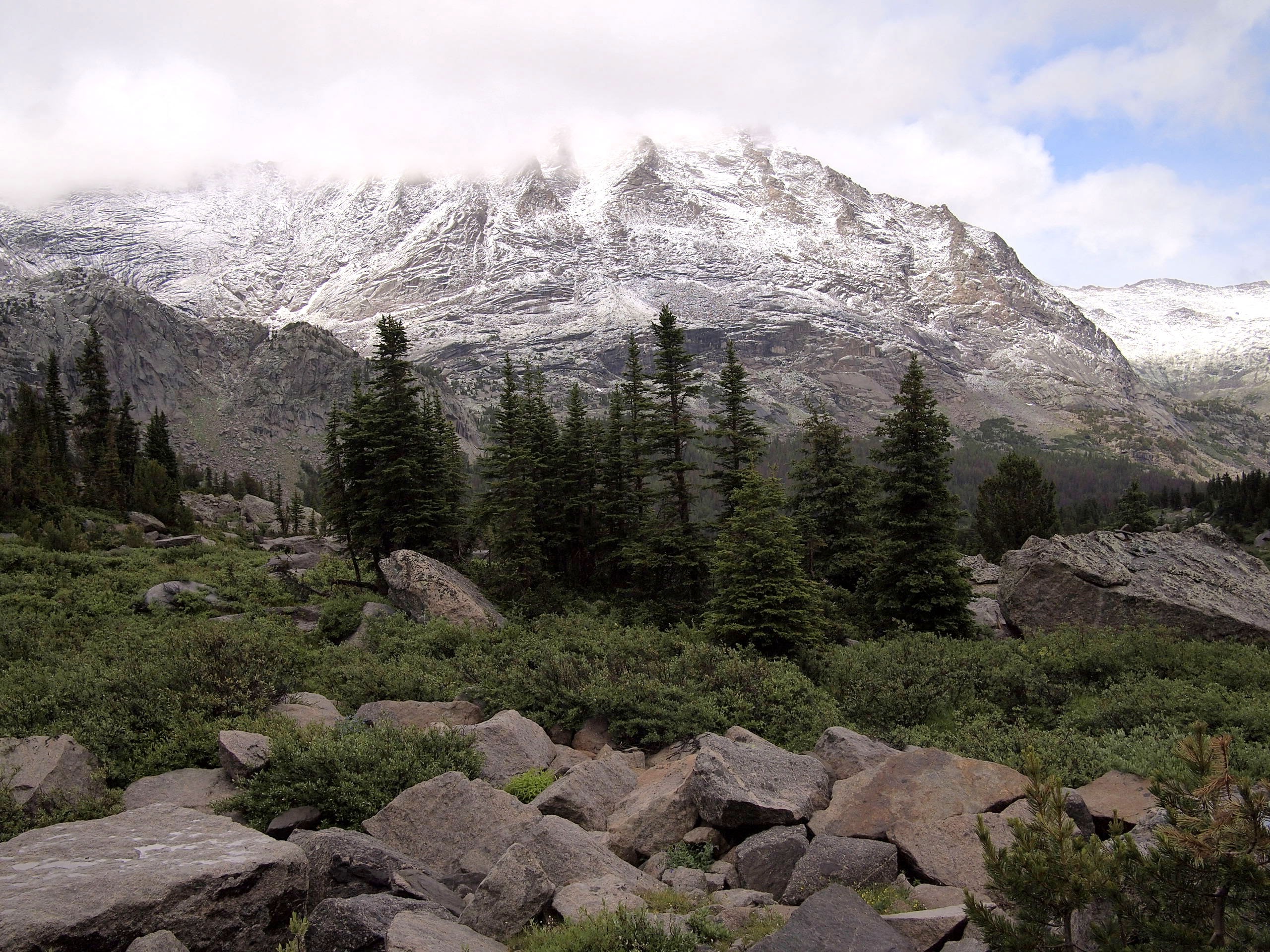 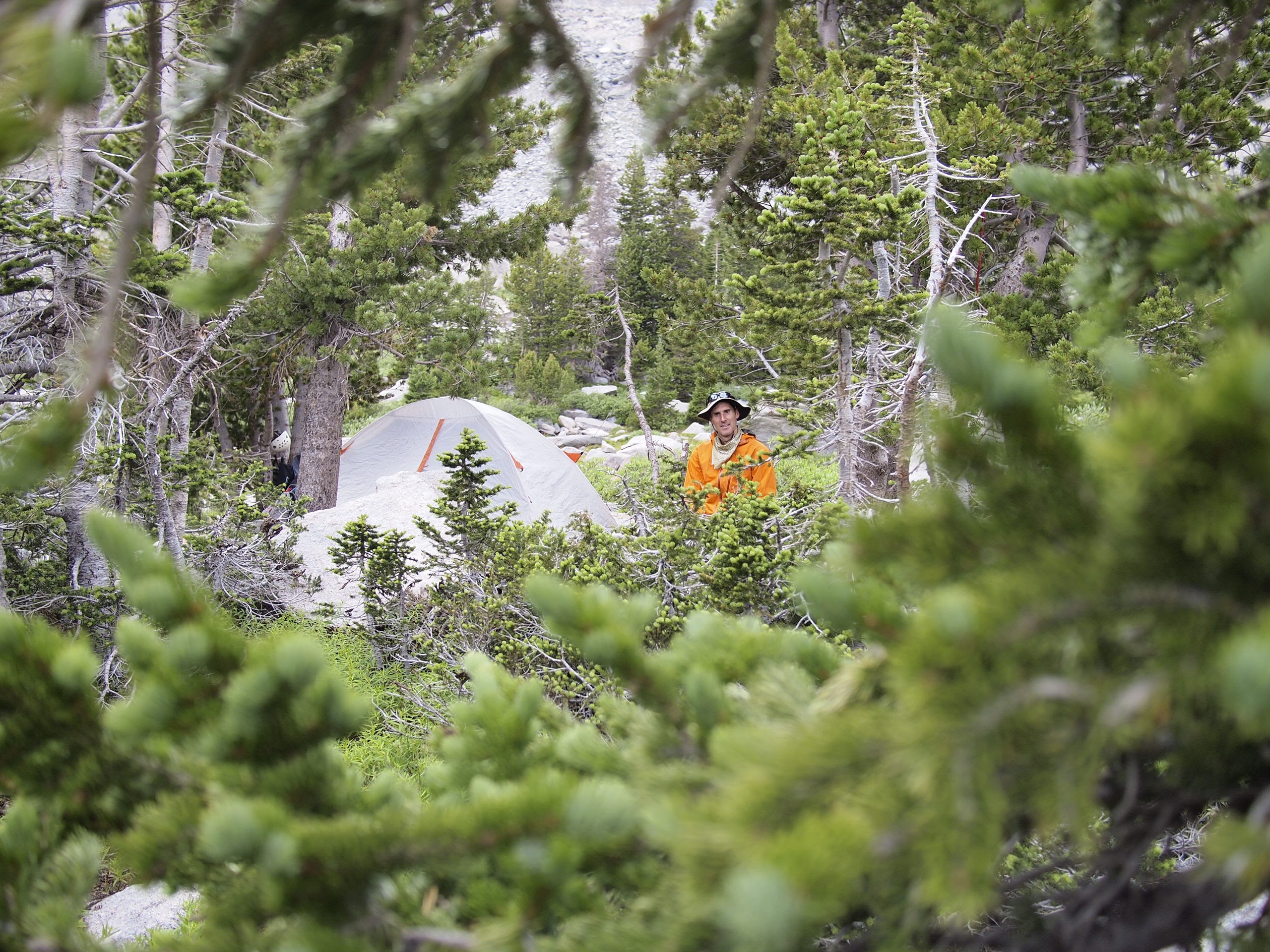 But we found the perfect campsite! Sheltered from the wind among these trees. 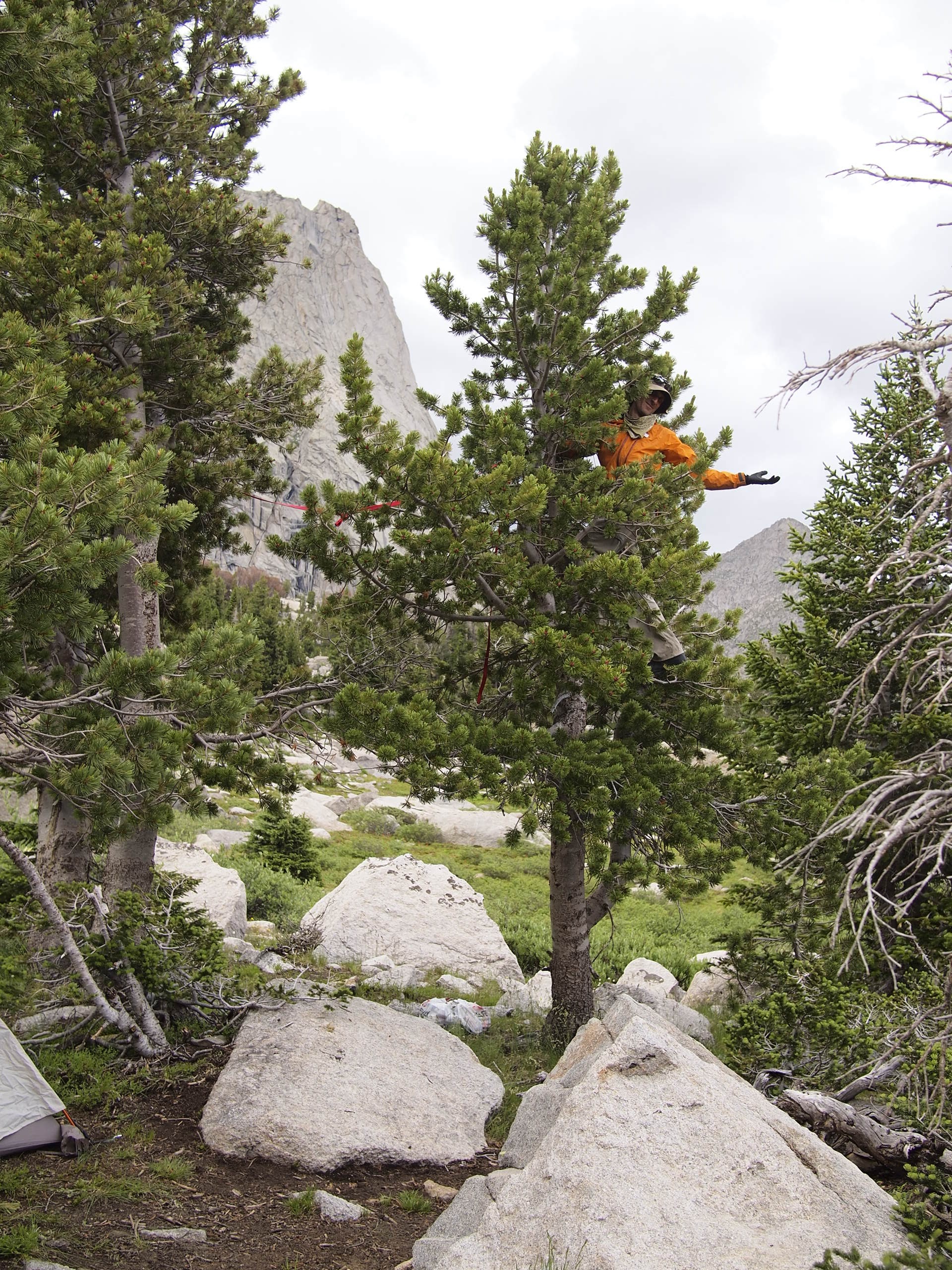 Setting up a system to hang our food. Our best attempt in protecting our food from marauding bears. 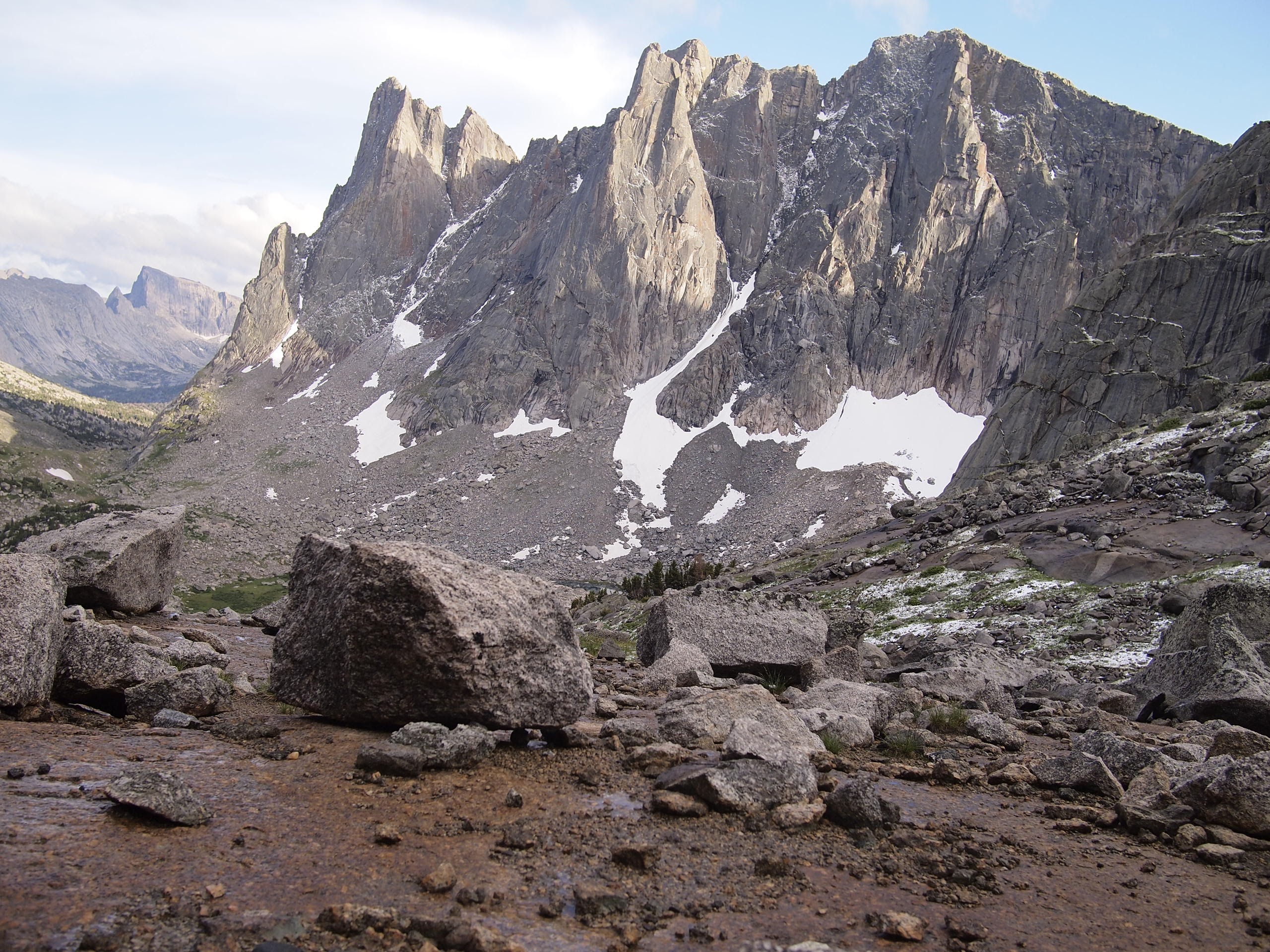 The weather was changing so rapidly. We had a brief reprieve from the rain in the afternoon. 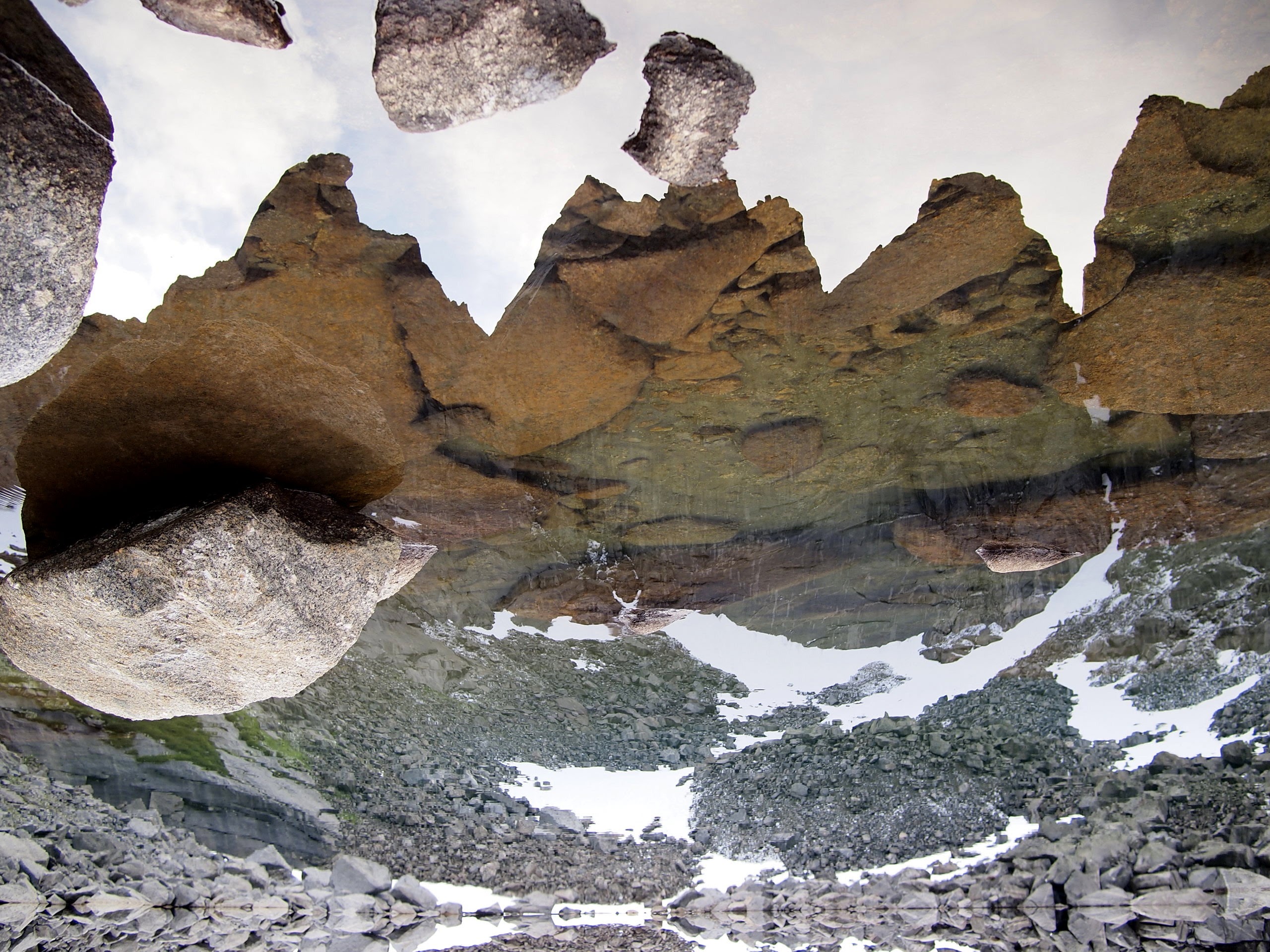 We had a brief reprieve from the rain in the afternoon and we used the time to scout out our approach and try not to get distracted by pretty reflections. 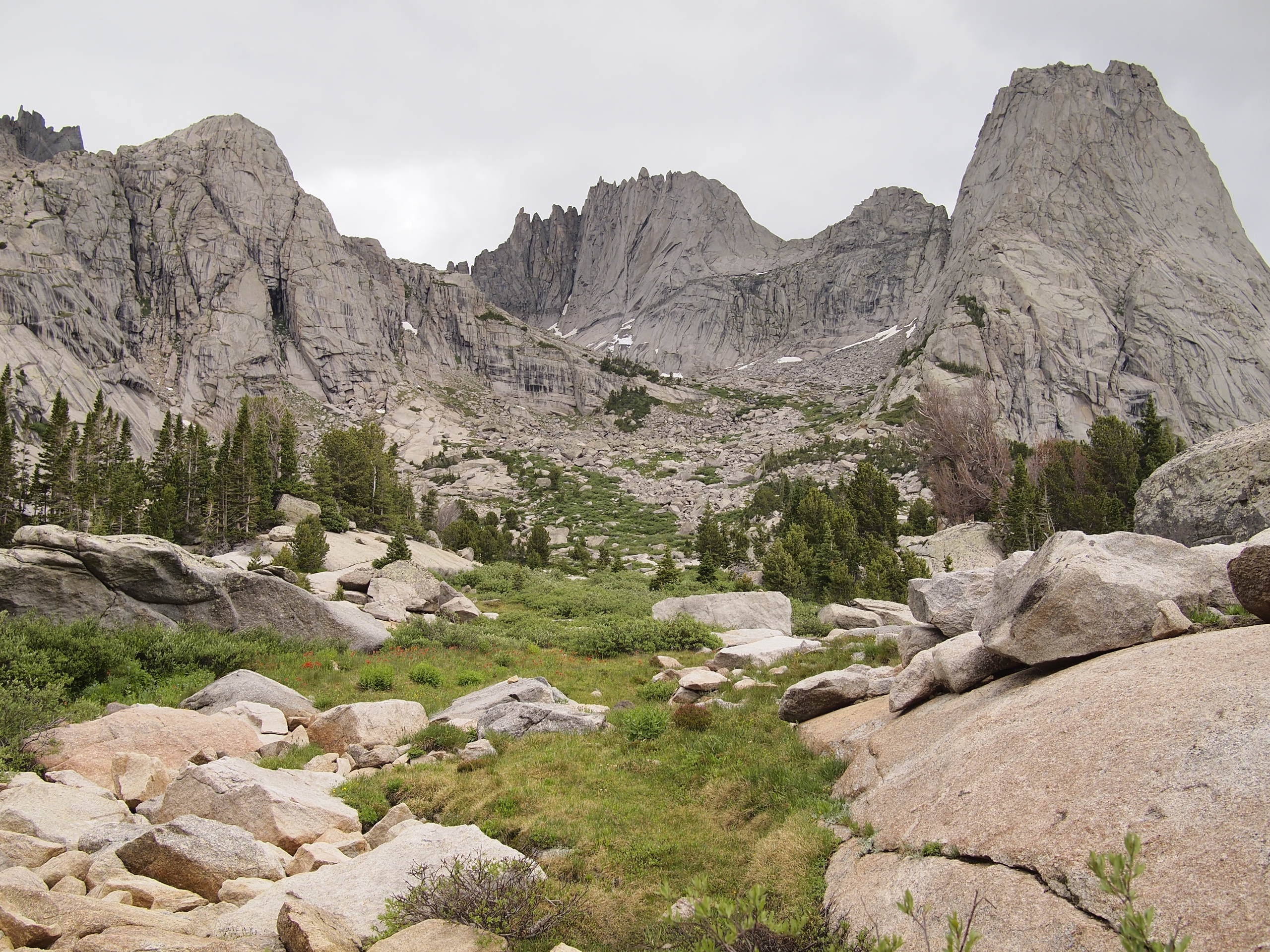 Pingora Peak is the chubby looking one on the right. To its left is the Tiger Tower and the Wolf’s Head Ridge.

We waited out the rain and wind on the first day. Staying inside our tent and poking our heads out every now and then to check the sky. Thankfully, neither of us got any cabin fever. I think living in a van together for the past months was a good practise for times like this. But even still, I was getting antsy. We only had supplies for 3 days.

The first day is already lost to bad weather, we’re supposed to hike back on the 3rd day. So tomorrow is our only full climbing day, our best chance to climb Pingora. Thankfully we woke up to a reasonably cloudless sky. We decided to take our chance and started out early after the break of dawn. 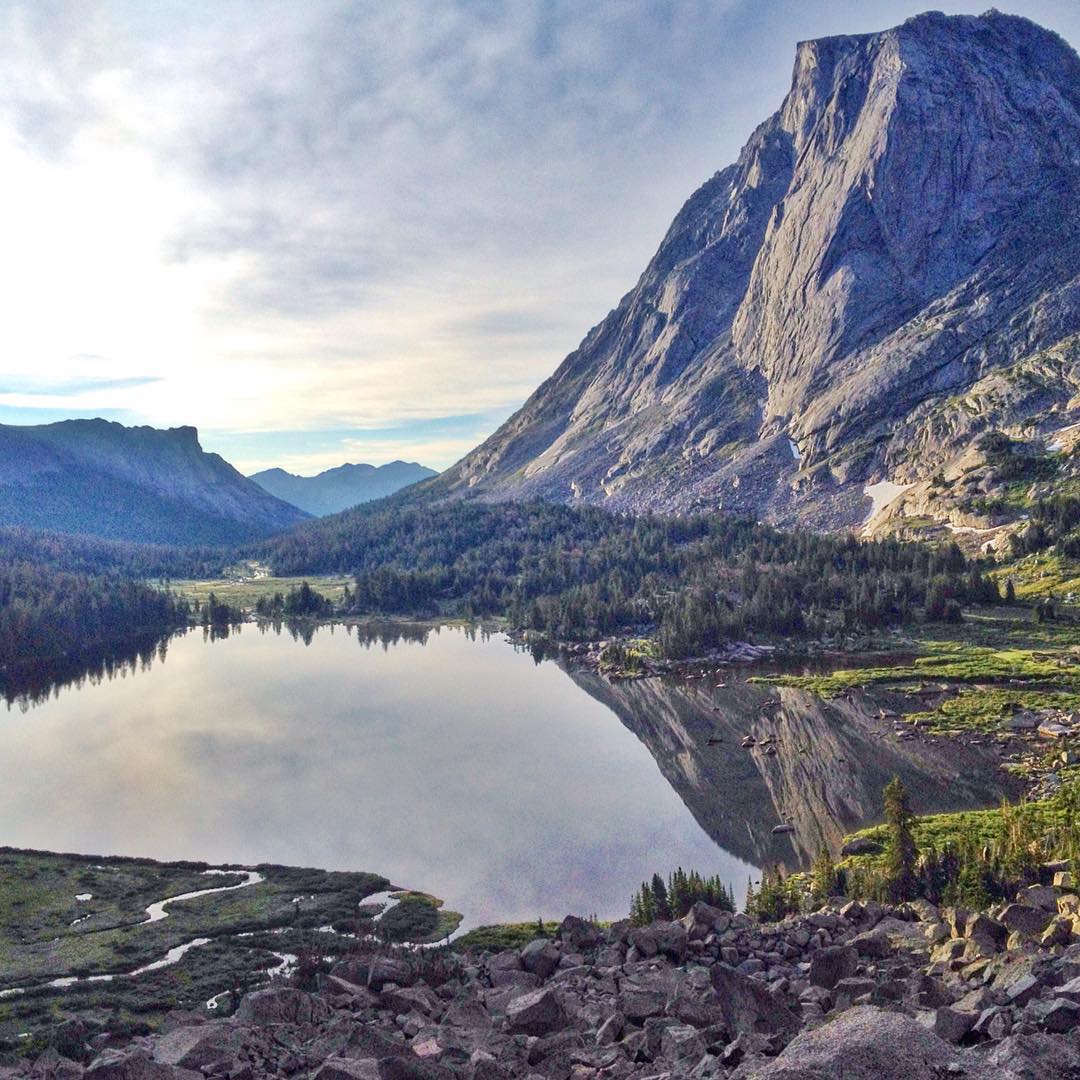 Morning reflection of Mt. Mitchell on Lonesome Lake in the Wind River Range. 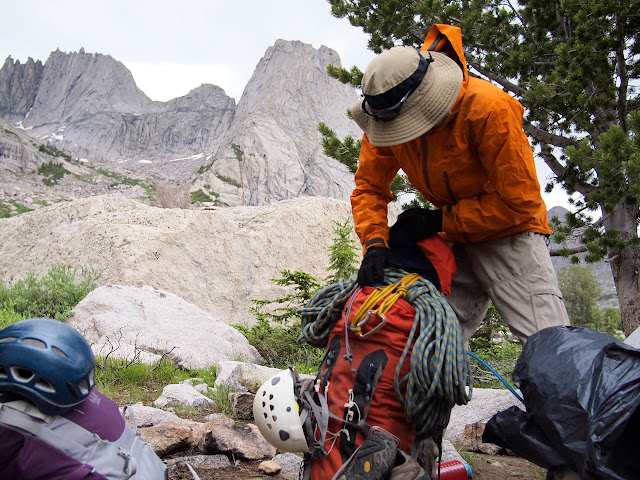 Getting everything ready the day’s ascent. 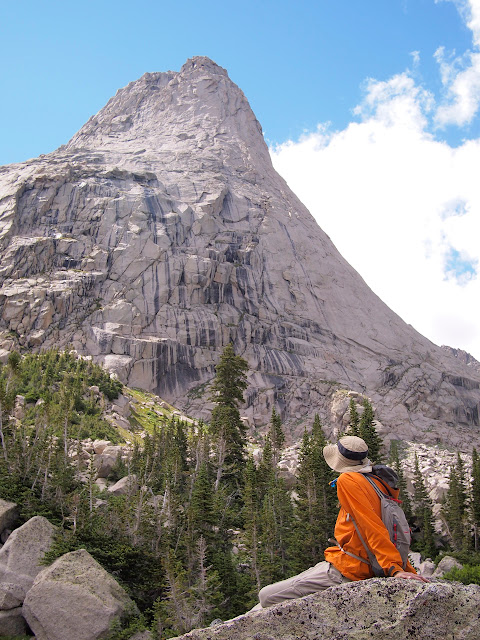 On our way to the base of the NE route 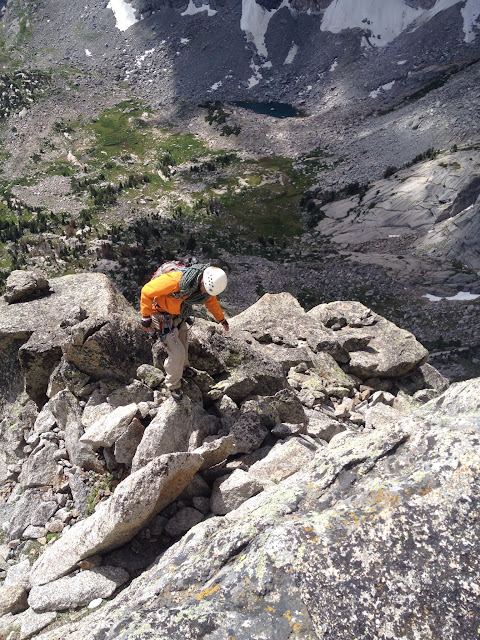 The last scramble up to the summit of Pingora

Inspired by his meeting with Hans Florin, a well known speed climber (he climbed the Nose in under 3 hours!) during Lander’s Climbing Festival, Jack wanted to move lighter and quicker than usual during our ascent on the North East buttress of Pingora.

Being at elevation, it wasn’t easy. I felt like I was running a sprint the whole time, huffing and puffing, and paying scant attention to what I was pulling or where I was putting my feet. Thankfully, the climbing was straightforward. We ended up doing the 10 pitch routes in 4.5 hours. Considering that in the past we averaged about 1 hour a pitch, we were pretty proud of the achievement. 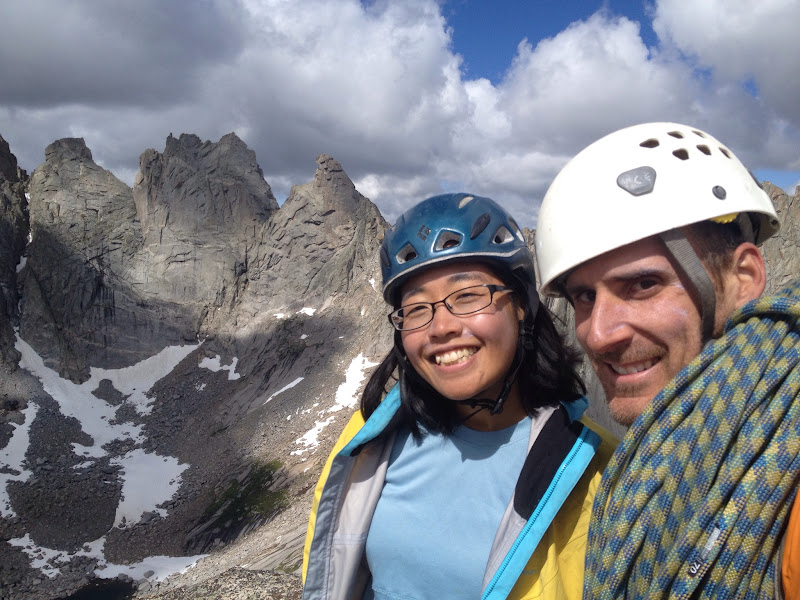 We made it! At the top of Pingora. Shark’s Nose and Overhanging Tower peaks are behind us. 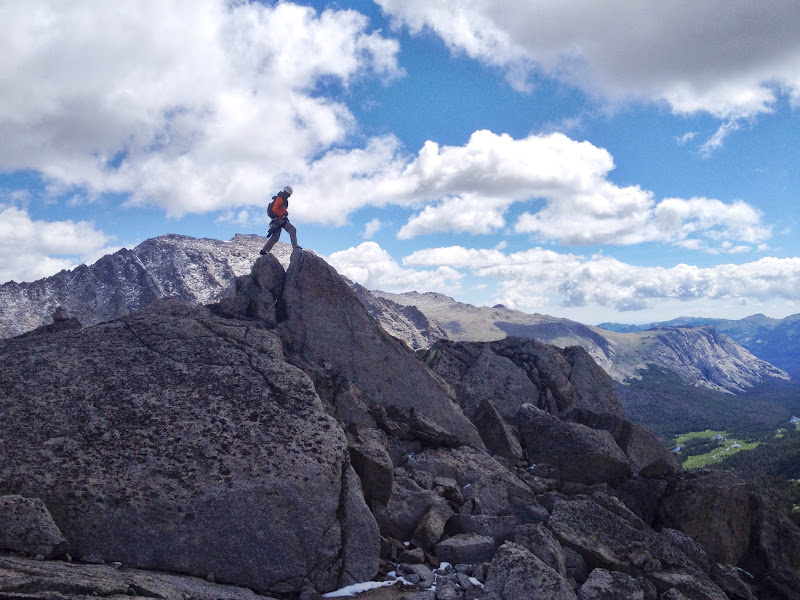 Scrambling around at the peak. 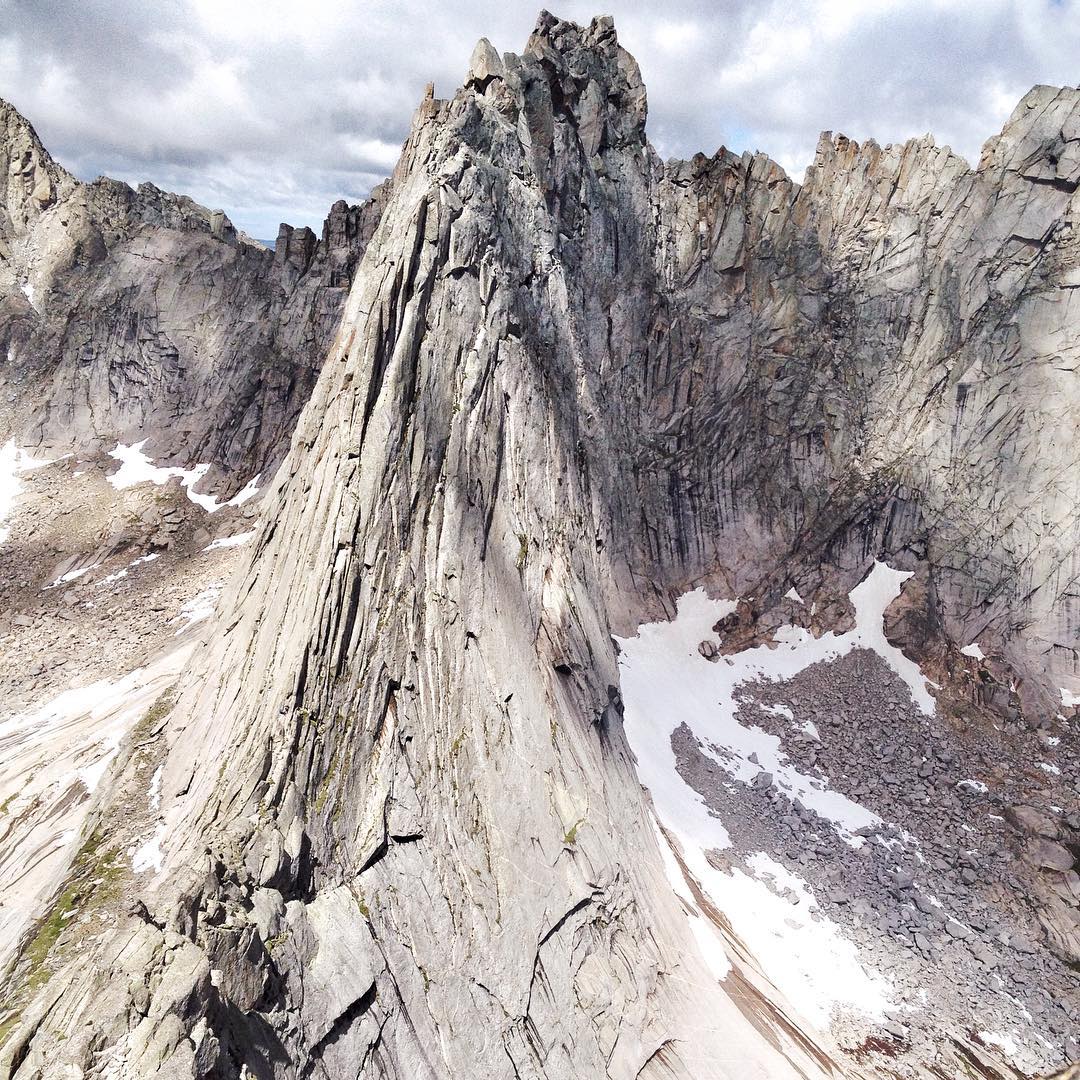 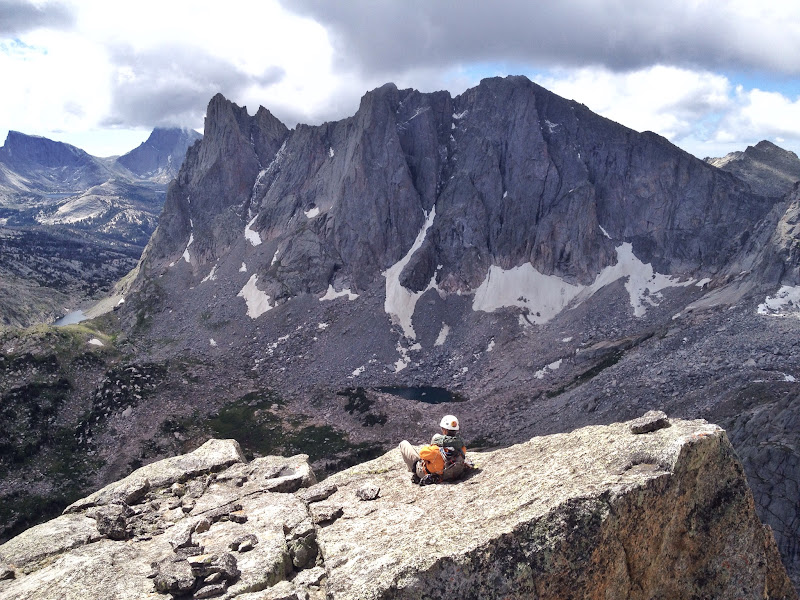 Remember to stop and savor the view.

The descent from Pingora involves some exposed scrambling ❤️

Click here for more photos. Stay tuned for more stories from The Winds!