During my 2 weeks in South Africa, I managed to make the drive over iconic mountain passes in all of Africa, the Sani Pass. Sani Pass, also known as the Roof of Africa, lies between the border controls of South Africa and the small, landlocked Mountain Kingdom of Lesotho (pronounced Le-su-thu). It is a series of treacherous switchbacks that takes you up to 2865m and delivers spectacular scenery as it slowly makes it way over the Drakensburg Mountains.

Sani Pass held the record for the highest pass in South Africa until 2016 when Ben MacDhui Pass (3001m) opened to the public.

As of early 2019 driving Sani Pass can only be done in a 4×4 vehicles. There has been talk recently of tarring the Sani Pass and as we were driving up, I saw sign of construction work. Tour companies understandably object to this because once the road is tarred, they’ll be rendered obsolete. Anyone will be able drive the road with regular rental car. Based on what I saw though, the work won’t be completed anytime soon. Ultimately, progress will have its way but until then – if you don’t have your own 4×4, you can join one of the many Sani Pass day tours from Underberg. I booked mine with Roof of Africa, which you can do through Viator here.

I met our driver at 9 am in front of Himeville Museum. My 2 hour drive from Pietermaritzburg to this meeting point was a jaw-dropping one. I left early enough that the road was covered in mist, at times I felt like I was driving through clouds. School children in uniform waved at me from the side of the road. And wherever there was a break in the fog, all I saw was expansive green undulating hills. So pretty.

At the museum I met 2 ladies from Durban, who and along with the driver formed out little group for the day. Leaving Himeville, it didn’t take long until we left the asphalt and headed up into the beautiful Drakensburg Mountains.

Our driver was a Zulu and he was very knowledgable about the various plants growing in the area. The 2 Durban ladies happened to be very interested in plants, which was how I ended up learning a lot about the native plants and their uses. Now if I ever find myself in South Africa bush with a urinary tract infection, I know that I need to find myself some wild African potato! 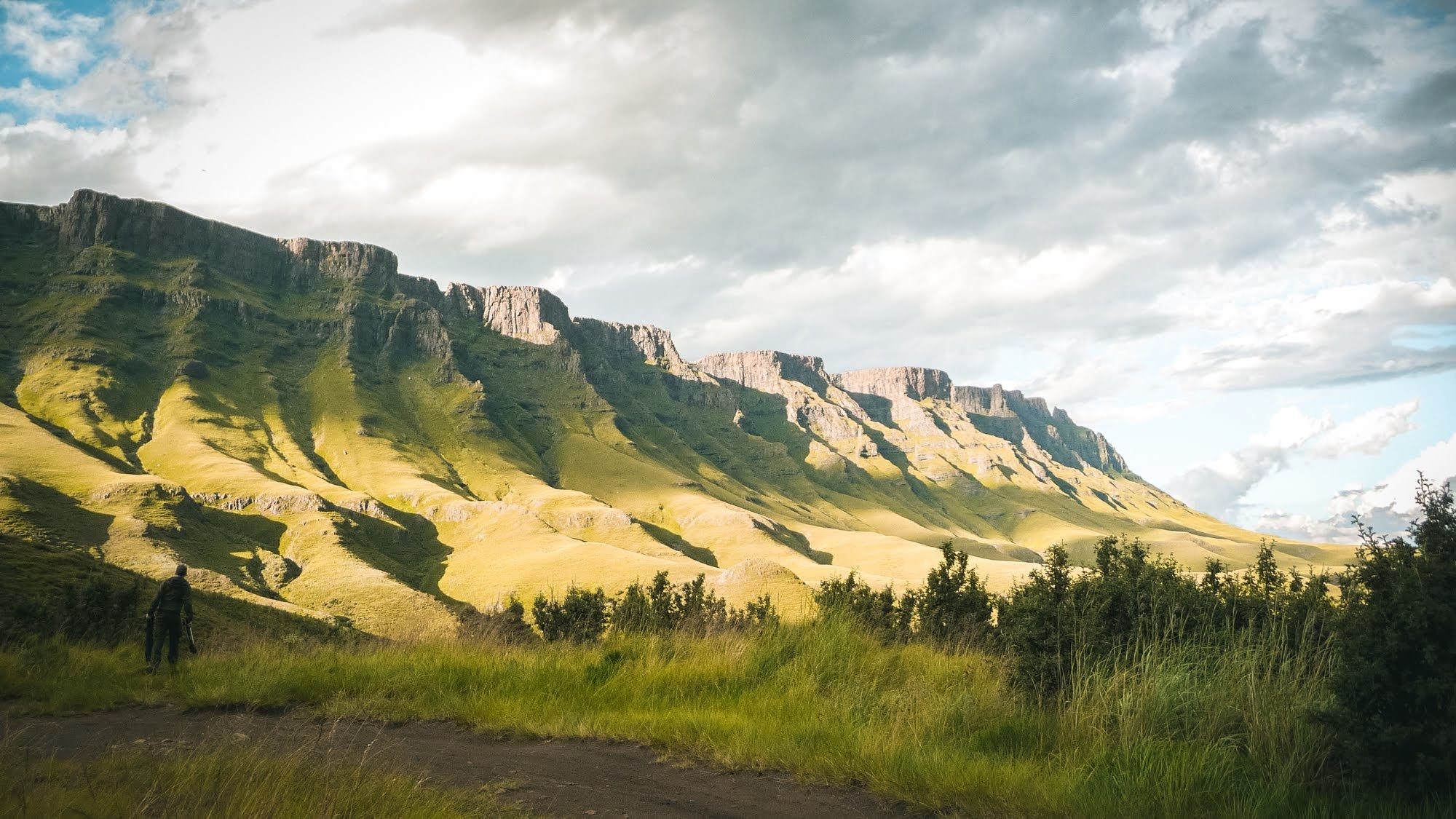 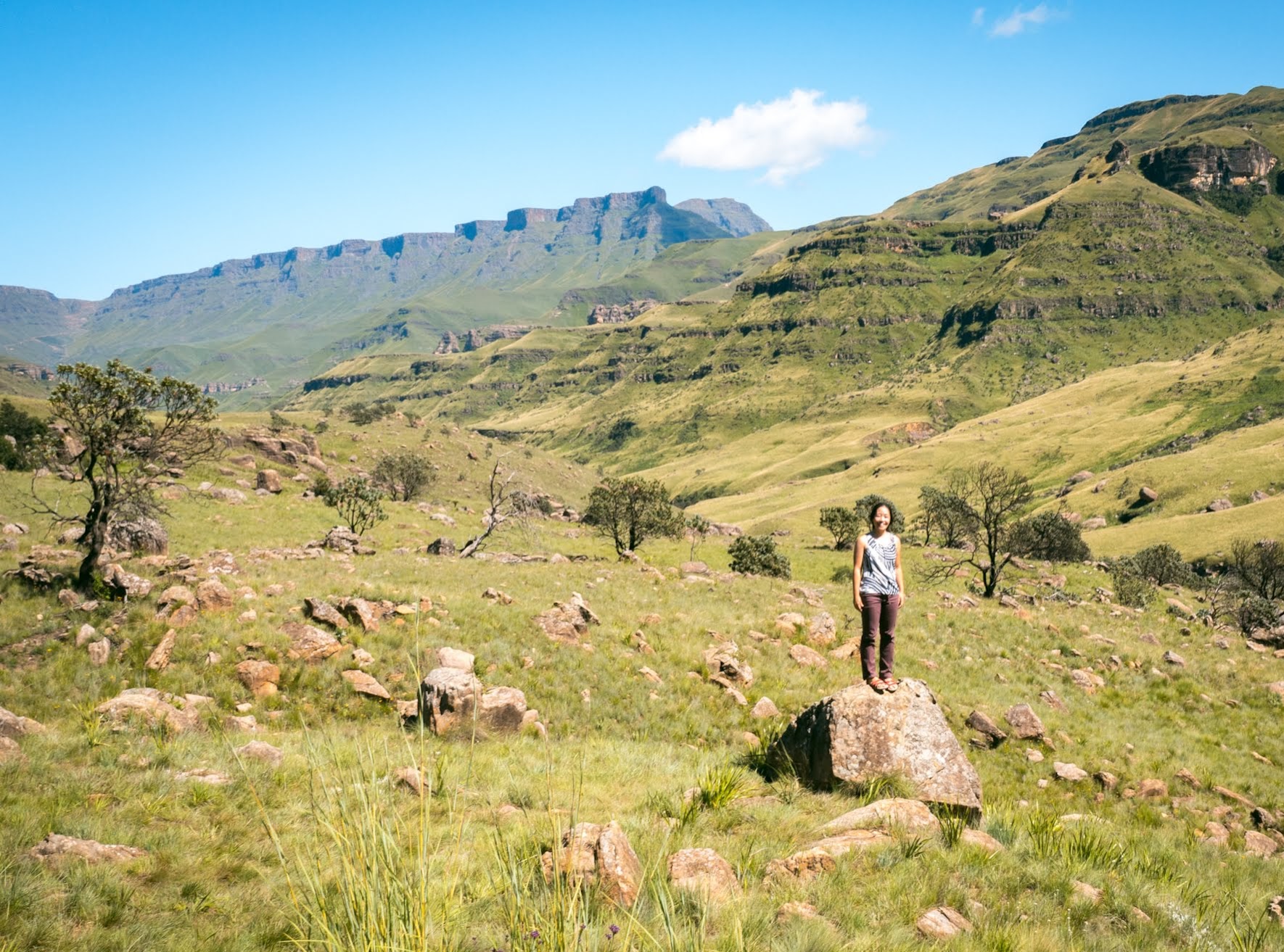 You can see the Lesotho plateau on the background. That’s where we’re heading. 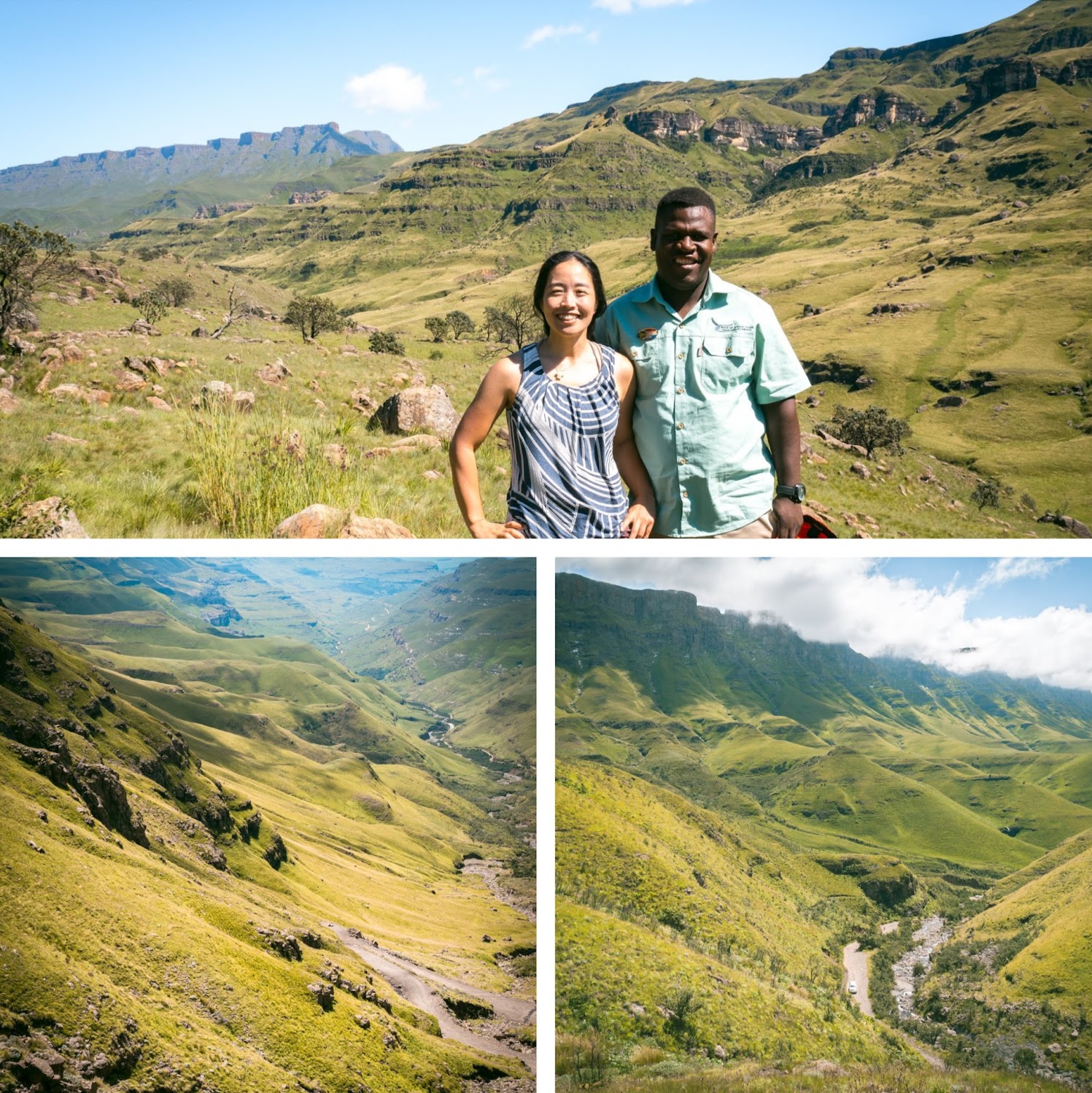 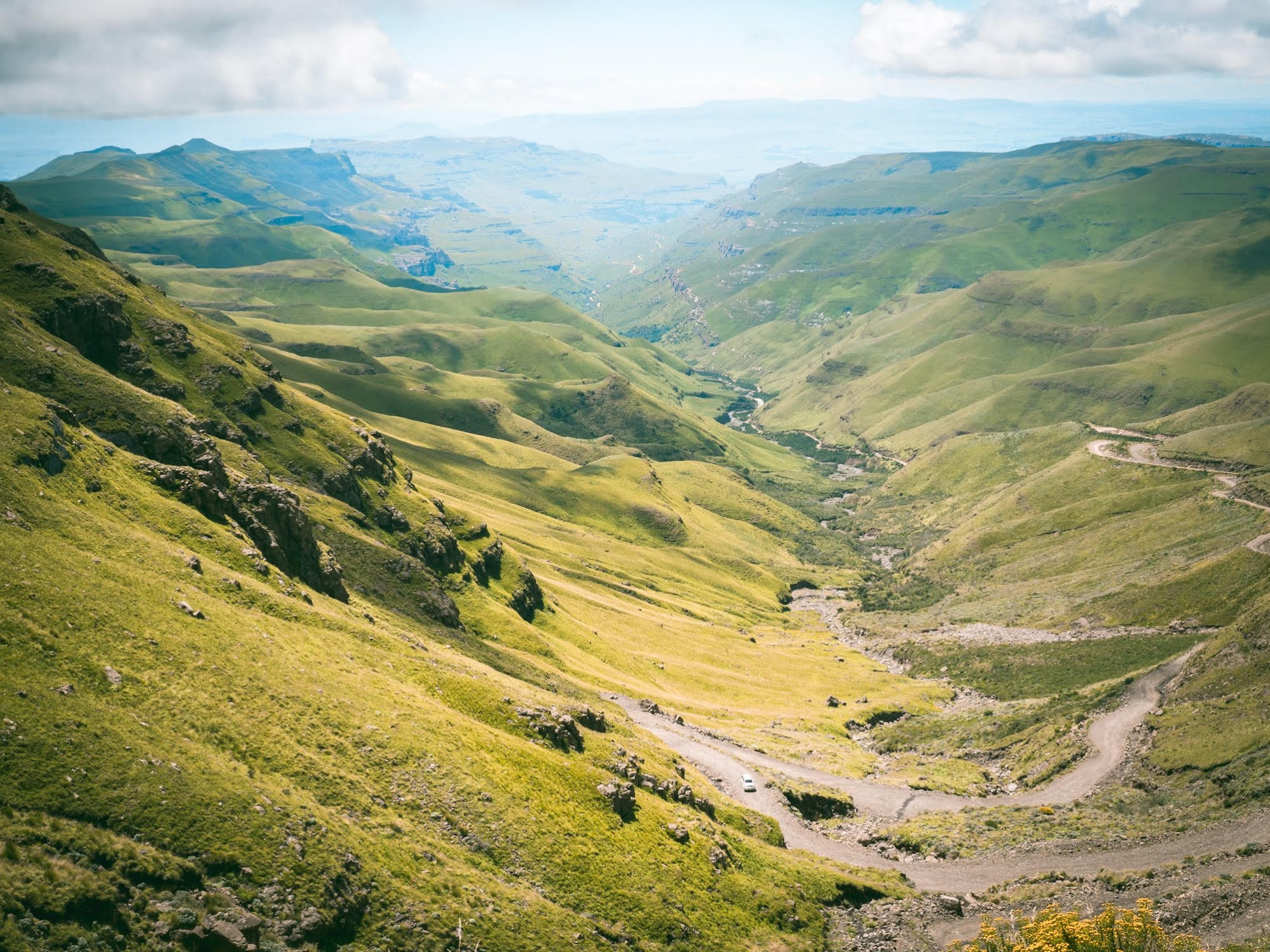 The twisty road of Sani Pass

The border crossing was simple affair that took minutes. Truly the most relaxed, least hassle crossing I’ve ever done. We didn’t even have to leave the car to get our entry stamp to Lesotho. Our driver took care of all of that.

As soon as we left South Africa and crossed over to Lesotho, the road became as smooth as a baby’s bottom. This was the recently finished Chinese-built road. It was kind of jarring to see this beautiful, paved 2 lane highway in the middle of this sun-baked plateau, where shepherd kids tended to their sheep among houses built on grass, mud bricks, and cow dung.

Random facts about Lesotho I found interesting: It’s very homogenous with 99% of its population belonging to the Basotho tribe. Totally unrelated, but even more interesting: In 2006, a 600+ karat diamond, later named Lesotho Promise, was discovered here. 2 years later, they found yet another ginormous diamond, a 400+ karat whopper. So when it’s your turn to visit Lesotho, keep your eyes peeled, people! It might be your lucky day.

Before lunch, our driver took us a house in a nearby village where we got to taste freshly-baked farm bread, and learn a bit about the village. The hut with its thick walls (made with cow dung) and thatched-grass roof provided shelter from the roaring wind outside. There were also souvenirs that our host and her family made that we could purchase. I was eyeing a serving tray made from locally harvested grass. But it was quite heavy and I didn’t want to carry it around for the rest of the trip. 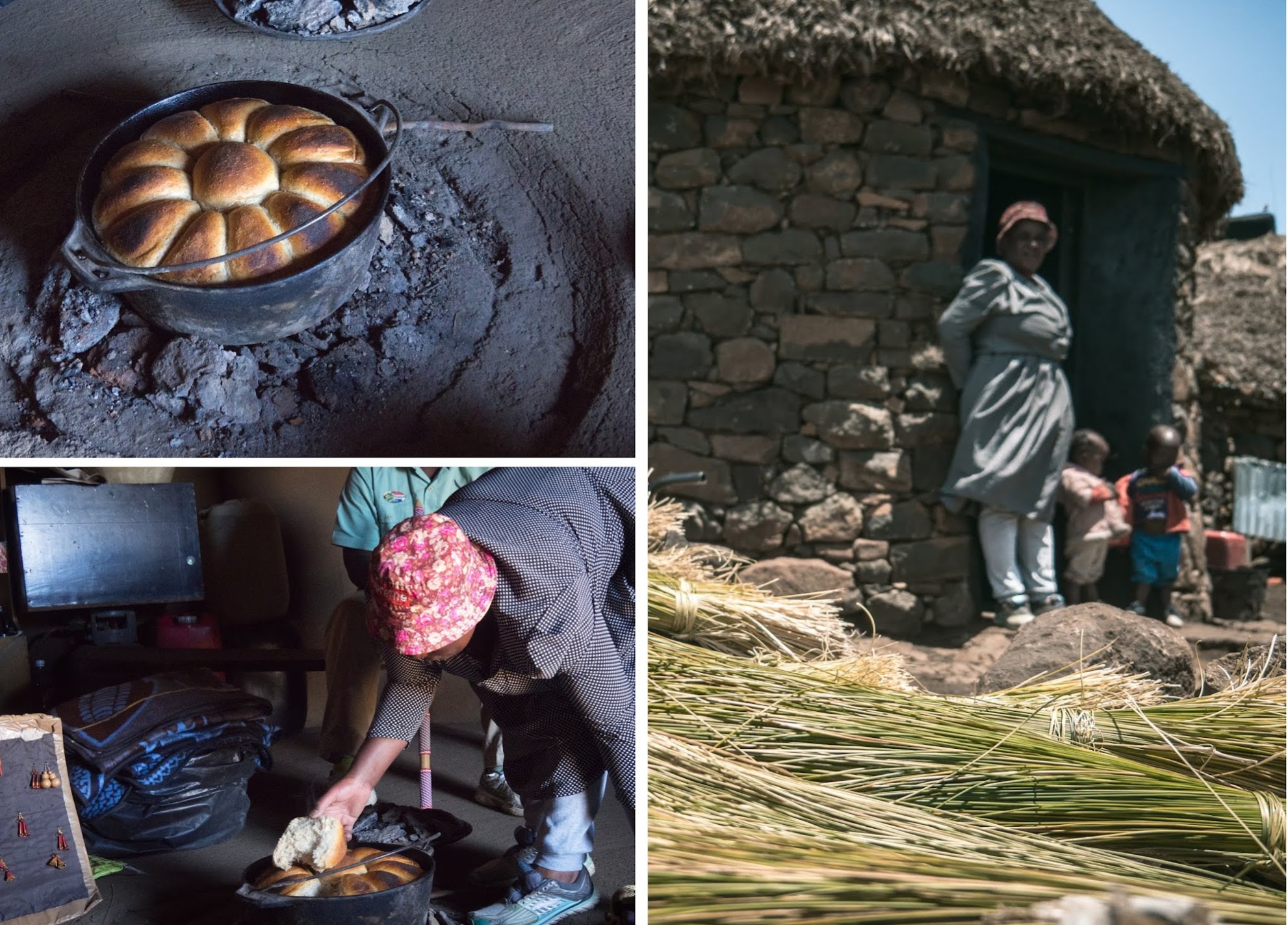 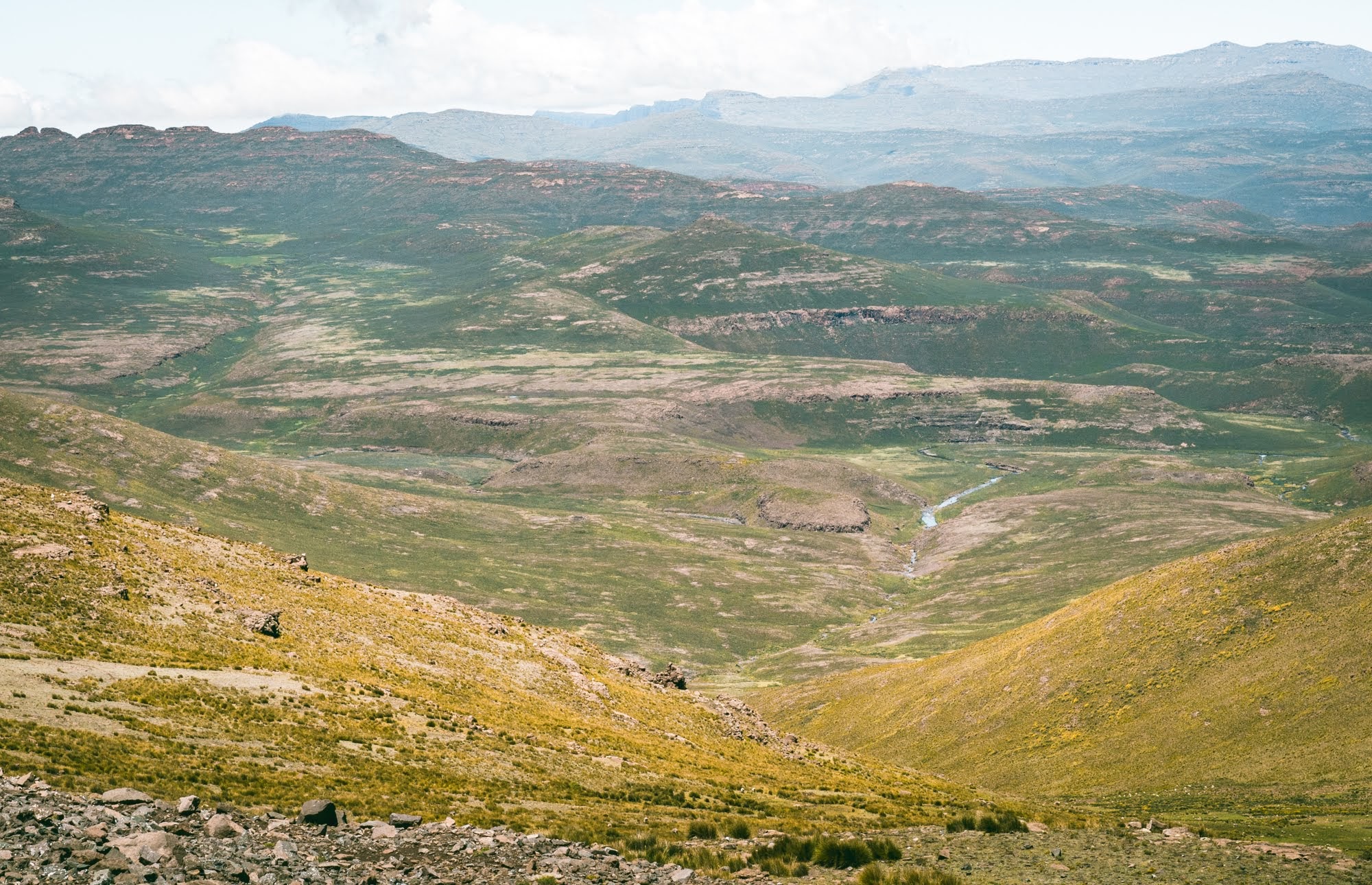 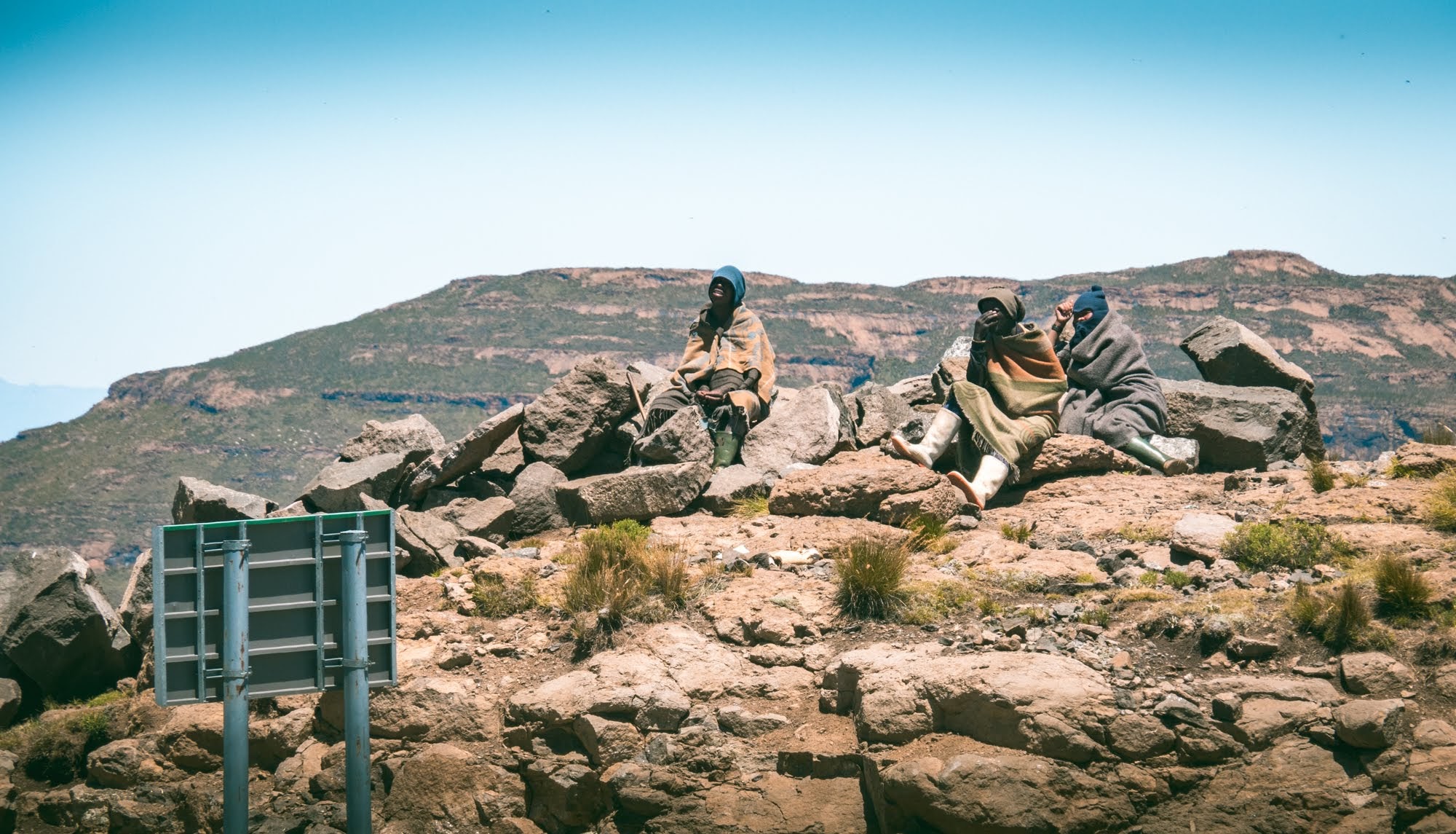 Lesotho has one of the world’s highest unemployment rate. These boys were sent to shepherd sheep in the high mountain for months during the summer. The lucky ones would go back to school in the cities after the summer ends. 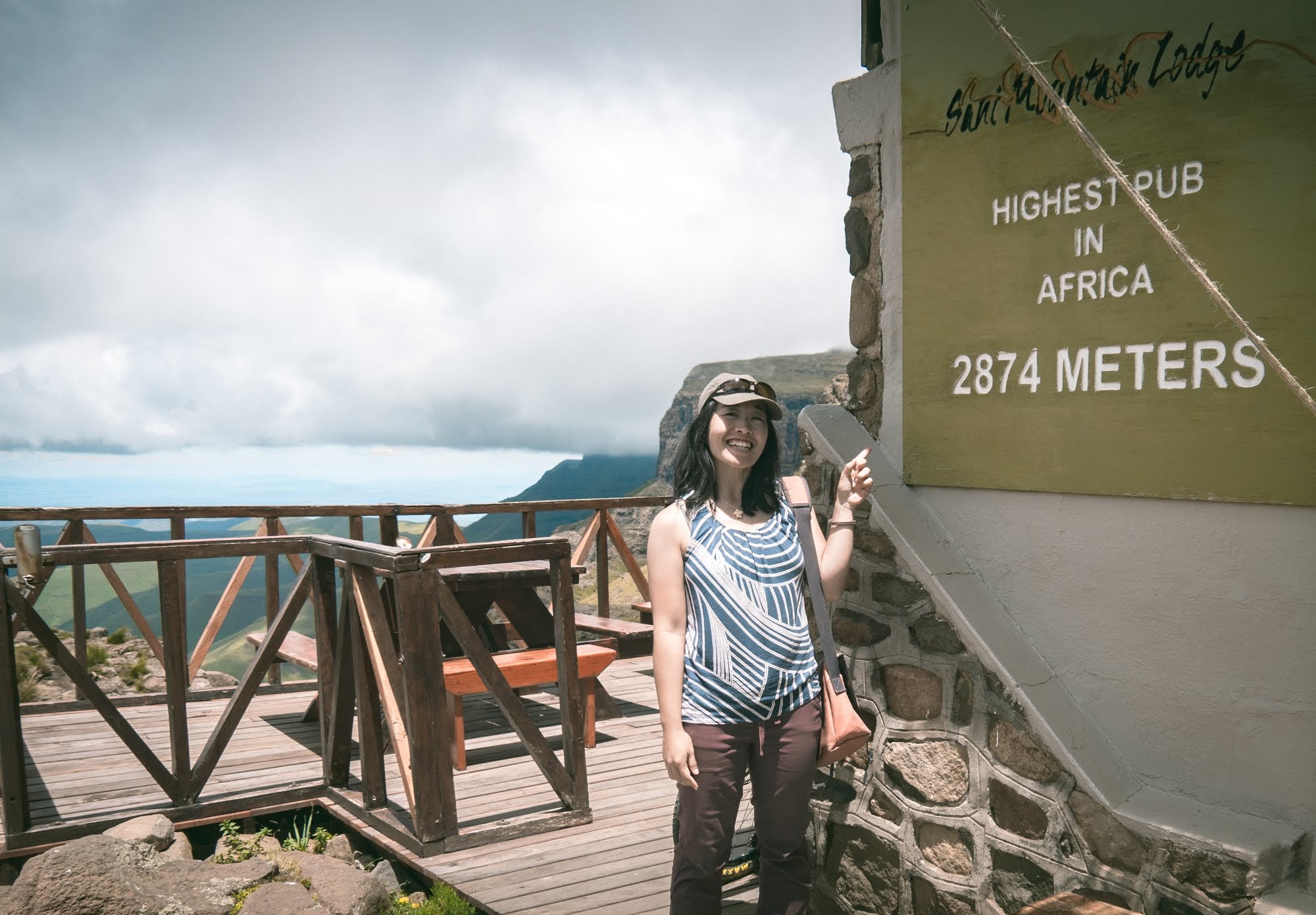 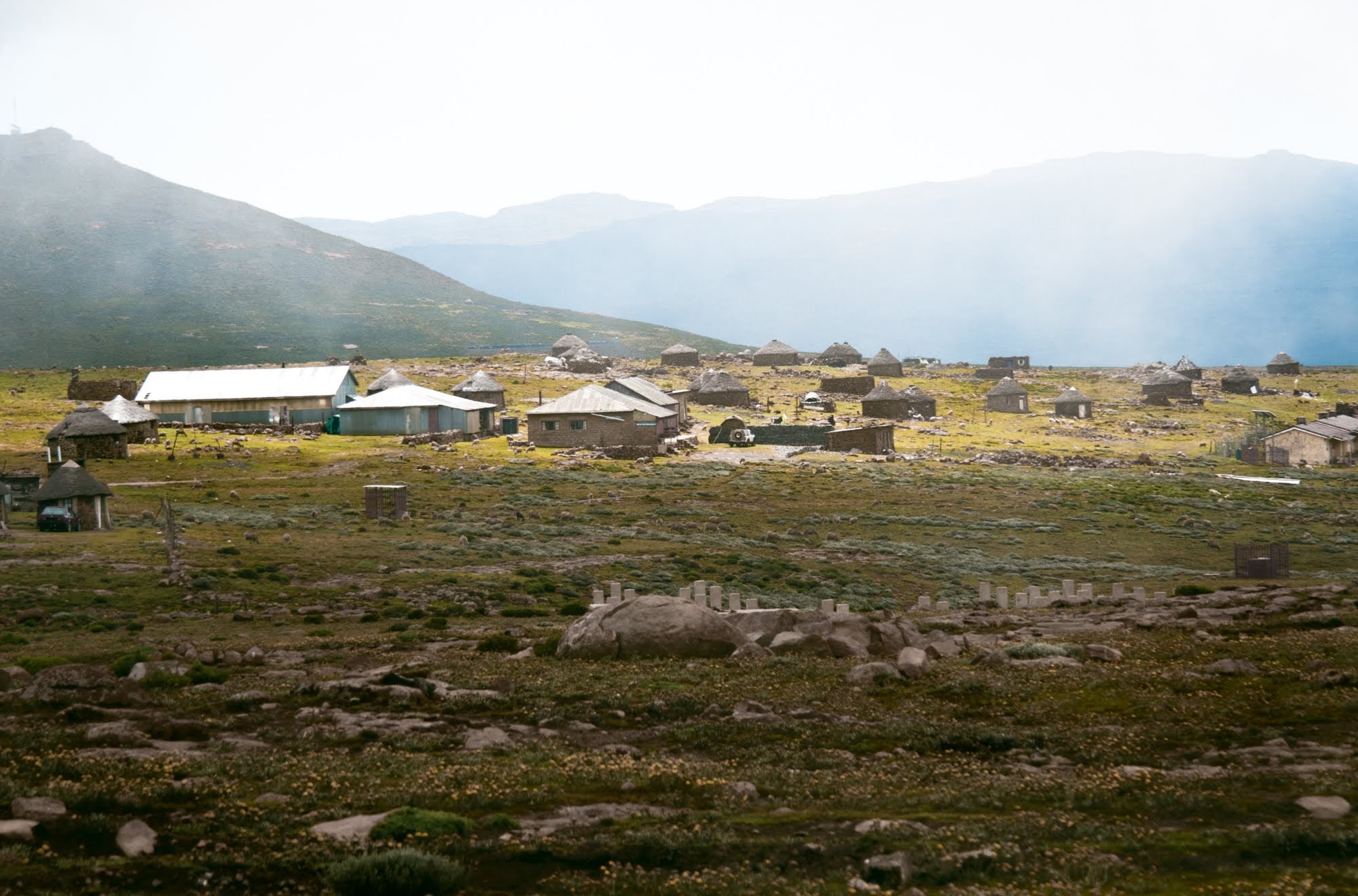 After a visit to the Basotho village, it was time for lunch! I was pleasantly surprised at the quality of the food at Sani Pass Lodge, whose claim to fame is being the highest pub in Africa. After lunch of grilled river trout and sandwiches, we were ready to start our journey back to Underberg. The drive down was scarier then the drive up. Our driver was unfazed and navigated the hairpin turns skillfully, “I could do this with my eyes closed,” he chuckled.

We were back at the Himeville Museum around 4pm. 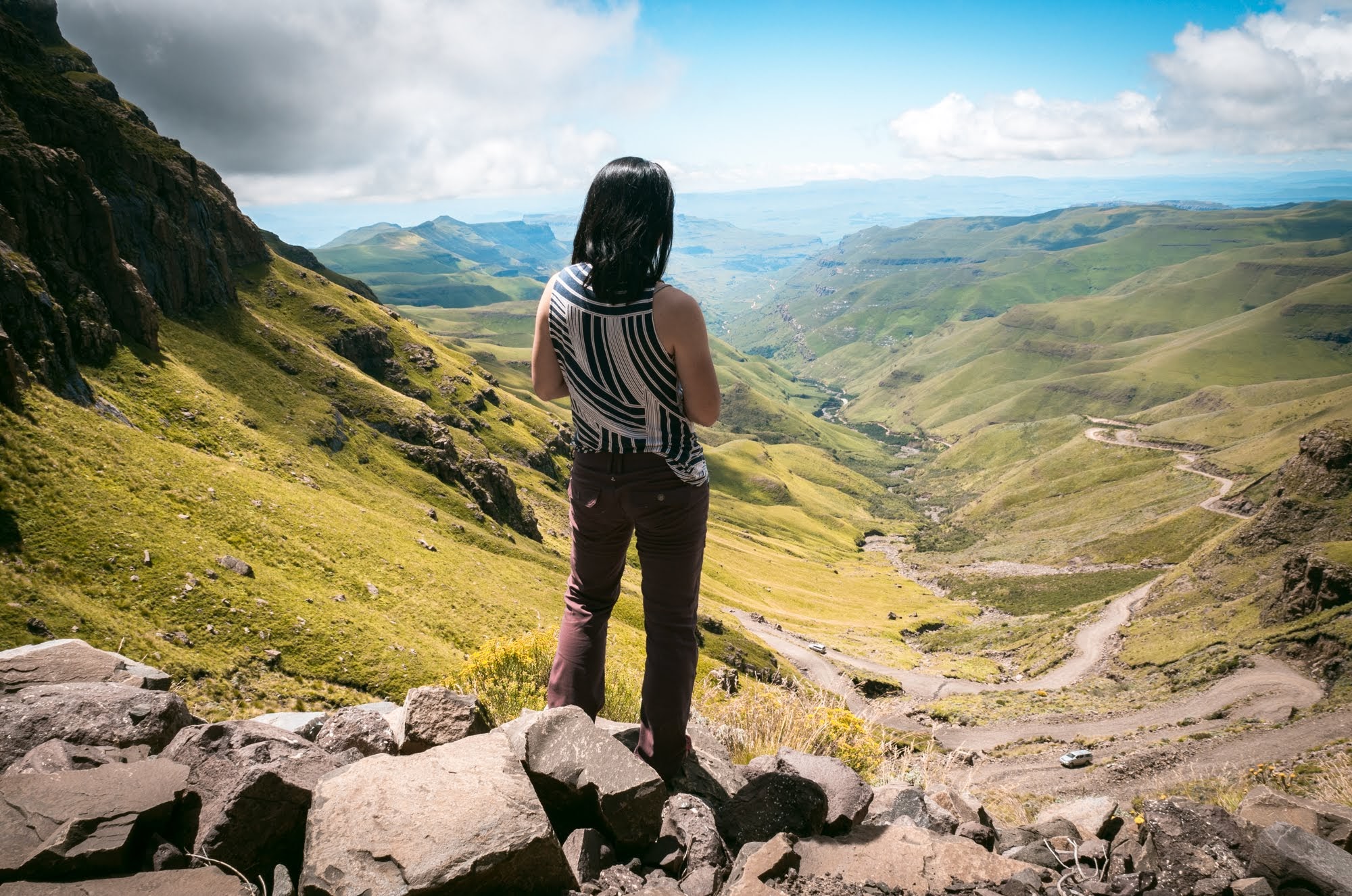 The hairpin switchbacks of Sani Pass 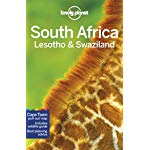 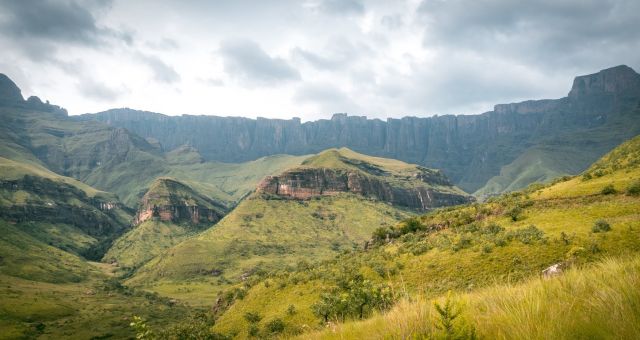