Took me 2 weeks to gather up the courage to go a hammam in Morocco (read here if you’re not sure what a hammam is) in Morocco. Being naked in public has never been on my “Things I’m Dying to Do in Morocco (or anywhere really)” list. It was more like on my “Things I Still Might Not Do Even I Ever Got Bored Enough” list. 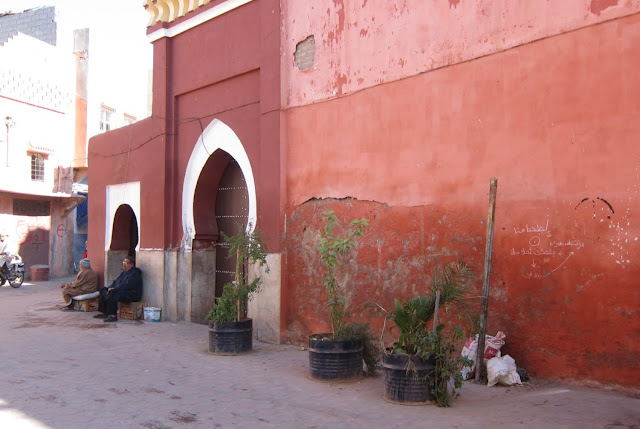 I’m a little bit of a prude when it comes to being naked in public. I don’t care if others let theirs sway and hang for all to see, just don’t expect me to join. Well, on our last day in Marrakesh, I was feeling a little burned out from the souks and the medina. The snake charmer just tried to get me to pay 100 Dirham ($12) after trying to put a snake on me and I was like, “That’s it. I’m done!”

Having lost interest in spending anymore time around the souks, I decided that I was finally ready for a hammam experience.

There are many hammams in Marrakech that are targeted to tourists. They’d have a website boasting beautifully decorated baths with rose petals, masseuse in sparkling white uniforms, and fluffy sandals. Not unlike spas back home.

I was looking more for a traditional Moroccan hammam experience – not so much because I don’t like rose petals and fluffy sandals, but because traditional hammams cost about 10x less. Hammams are still a big part of everyday life here in Morocco where a lot of folks still don’t have access to hot water in their centuries-old houses.

But since most local hammams in Morocco do not advertise themselves (or only have signs in Arabic), they can be hard to find. I ended up making my way past stores selling home fixtures and bike tires towards Hammam Bab Doukkala. According to Lonely Planet it’s one of the oldest hammams in Marrakech and has been operating since the 17th century.

After asking for directions, I was directed towards a non-descript door on one side of Mosque Bab Doukkala. The stern-faced hammam lady who greeted me shooed me out of the door upon seeing that I only brought a towel with me. Apparently I needed to bring my own soap too.

I walked around until I found a store that looks like it might carry beauty products. After repeatedly saying ‘hammam’ to the owner, he sent me away with a tub of black goo (20 Dirham) and a mitten (5 Dirham).

Presenting my newly purchased hammam kit as if it was a gift, the stern-faced lady deemed I was finally worthy to enter. She led me through dark and unlit passageways to a large and naturally lit room.

As soon as I stepped inside the hammam, I knew for a fact that I would not find any rose petals and fluffy sandals anywhere in this place. 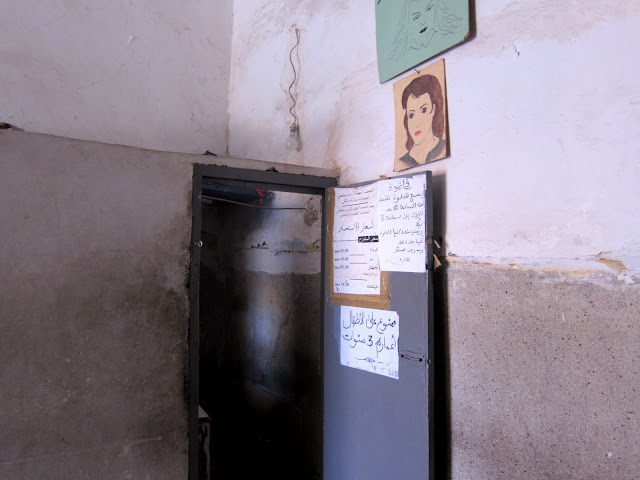 Where you pay the entrance fee - does it look like the kind of place that would have rose petals?

The room I entered was dark and cavernous, it has beautifully carved wooden ceilings. Other than some benches and a set of wire cubes to put your stuff in, the room was practically bare.

I looked around for anything that would give me a hint on what to do next. Unfortunately I was the only one in the hammam at that time so I couldn’t employ my ‘watch-and-copy’ method that I usually do whenever I find myself in strange situations. 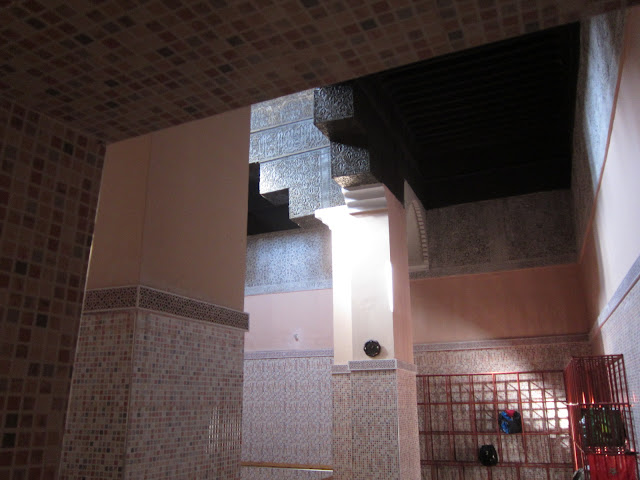 The stern-faced lady re-appeared all of a sudden, naked except for a pair of white knickers. She indicated that I needed to get as, or preferably, more naked than she was. She indicated this by trying to unbutton my jeans for me, her large and droopy breasts swaying dangerously close to my face. I had never been so close to a pair of another woman’s breast after I stopped breast-feeding. I found it extremely disconcerting.

I could smell her body odor. I started having second thought. Then she took off my glasses and I knew then that I’m stuck. Rendered practically blind, I don’t think I could find my way out even if I wanted to.

I undressed to my knickers and entered the sauna only to find myself surrounded by buckets and plastic stools – I felt someone grab my hand and gently led me out of the storage room I had apparently wandered into in my blind state and into a large and steamy-hot dark room.

The hammam lady sat me down on a plastic mat in an empty hallway that separates the big hot room from a smaller but hotter room. She filled a tub with hot water that she unceremoniously dumped all over me. I screamed in surprise. She laughed.

After indicating that I should cover myself with that dark gooey stuff I just bought – she left. I’m not sure what that stuff is – but it seems to be oil-based as it was very… well, oily. Not unpleasant and it surprisingly washes off pretty easily with water.

Then I waited. And waited. Knees on my chest and feeling more vulnerable than ever. Just to kill time, I kept putting on more and more of the oily stuff. A thought cross my mind that I could, inadvertently, slide along the hammam’s floor given how oily I was at that time.

I heard other hammam attendees arriving and sound of running water echoing in the big rooms. But all I could see was a fuzzy version of things: fuzzy tiled-covered floor, fuzzy benches, fuzzy grey walls and fuzzy outlines of other women. I started to wonder if I were supposed to go grab my hammam lady. Or maybe I had been forgotten.

After transferring most of the content of the oily goo onto my body, I finally decided – ‘I should go get her’. I stood up and immediately found myself sprawled on the hallway having slipped on some of the oily goo on the floor. Cursing loudly I groped around for my mat, found it, and sat back down deciding that maybe waiting was not such a bad idea after all.

Fortunately she did not forget me. She came back carrying a plastic stool and proceeded to push and re-arranged my naked limbs into positions using my oily bum as a pivot while scrubbing me from head to toe.

I was scrubbed so hard I thought I must’ve bled in some places. Tummy side up, now turn over, sit up and face the wall, swivel the other way, leg out, no – the other leg. Every now and then with a victorious ‘Madame!’ she’d show me pieces of dead skin cells that she managed to scrubb off shouting. 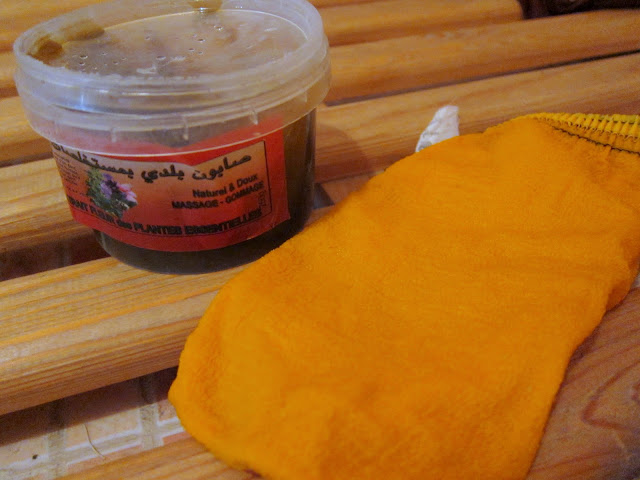 My gooey hammam soap and mitten

My hair was shampooed and braided, and using the same gooey stuff I was massaged. Meanwhile, every now and then bucketfulls of water were poured on me. Without warning.

I could already see the headline: ‘Tourist drown in a local hammam. Didn’t know the word “Stop” in French or Arabic.’

I quickly learned to take quick deep breaths whenever I could and kept my eyes and mouth shut. You never know when and from where the next bucket of water would come from.

Amazingly, I found myself letting go of trying to guess what’s coming next and started to enjoy the whole thing. There was something about being naked in public (albeit a dark and warm public place) and being bossed around that I found relaxing. (It comes out sounding a little strange, doesn’t it?).

Just as I was getting relaxed (which was something I never, ever, thought I’d be able to do in such situation) – she signaled that it was over and led me back to the changing room – which was awfully cold by comparison. At a more upscale hammam this is when they’d serve you tea and cookies. No signs of cookies or any other kind of refreshment was spotted here.

After I put my glasses back on, I felt like I just woke up from a dream. A very blurry dream that involves a lot of water. I can’t believe that a burly and half-naked Moroccan lady just touched me – no, grabbed, pinched, and pummeled me – in places I’d consider inappropriate in a different situation. I can’t believe that I’d see a half-naked, burly Moroccan woman.

I felt so clean I could hear the squeaking of my butt cheeks rubbing against each other. And I felt so much lighter now that a pound of my skin (or so it seemed) has been sloughed off. I wished I could linger to savor the feeling a little bit longer but I felt uncomfortable hanging around clothed (while everybody else is naked) or unclothed (the whole naked in public thing). So I left. Squeaky clean after my hammam experience

Unfortunately the feeling of ‘I’d never been so clean in my life’ didn’t last for long. By the time I got back to my riad, dodging motorcycles and horse carriages, I felt like I could use another hammam lady to scrub me down.

Yes, despite the near drowning and the mishandling, I think I might actually go hammam-ing again.

Thinking of going to a traditional Moroccan hammam?

And you don’t speak a word of French or Arabic? Yes, it can be done. Have faith in the hammam ladies to take care of you. They will boss you around, touch you in places that normally don’t see sunlight, and send you home cleaner than ever.

Not comfortable with the idea of being naked in public? Neither was I. It took me sometime to relax, but now that I know what to expect, I think I will enjoy my next visit so much more.

Would you consider going to a hammam?

Practical tips about going to a Moroccan hammam
– Your hammam kit should consist of a towel, hammam soap (they call it ‘sabon noir’ – or black soap), and a mitten.
– Optional: shampoo, a comb, a plastic mat and slippers. I didn’t bring these so they provided me with one.
– Entrance fee to Hammam Bab Doukkala: 10 Dirham. Another 10 for a lady to guard the stuff, and 100 Dirhams for a massage and a scrub.
Facebook Twitter Pinterest 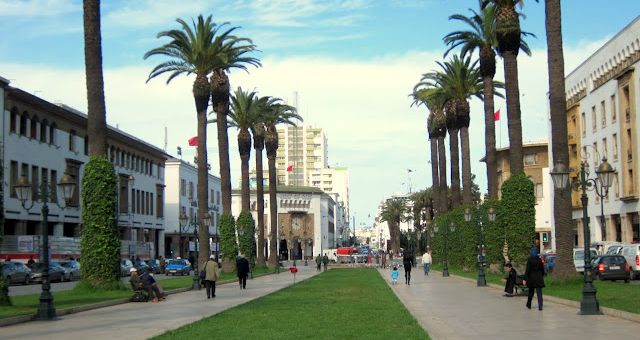 Easing in into the Madness in Rabat, Morocco 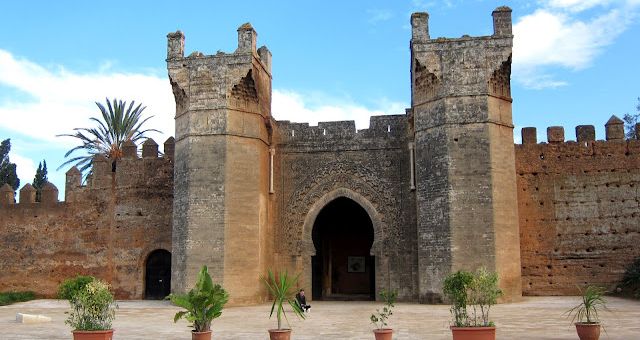 Ruins of Chellah – Where Cats and Storks Roam Free 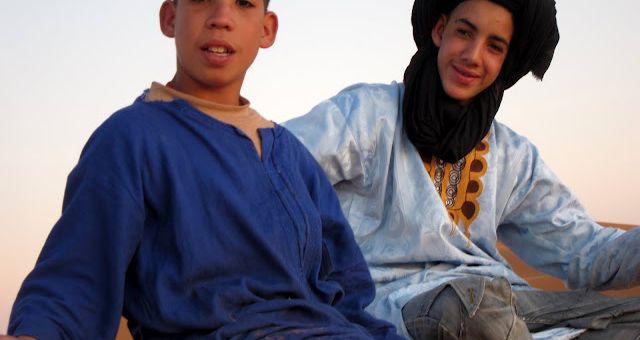