Staying in a riad is definitely something you have to do when traveling to Morocco. (That, and going to a local hammam). On this post I wrote about our favorite place we stayed in Morocco. Usually we tend to stay in more budget accommodation, we decided to splurge for a stay in a riad in Marrakesh. We expected Morocco to be crazy and hectic (we were right), and that we’d relish having a nice place to retire to at the end of the day (we were right again). Having had this experience, I highly recommend that anyone traveling to Morocco to spend at least one night in a riad.

But, what is a riad?

Riad is traditional house in Morocco. It is characterized by having an inner courtyard or a garden as the central element of the building. As a matter of fact, the name comes from the Arab word ‘ryad’ – garden. Riads in Morocco were often homes of the wealthiest citizens such as merchants or palace courtiers.

Following the Islamic idea of privacy and inward reflection, a riad doesn’t usually have large windows facing the outside. Instead, rooms in a riad will have windows facing the open-ceiling inner courtyard/garden. For that same reason, you often can’t tell that a simple door hides an amazing and beautifully decorated palace. Some of the riads don’t even have a sign outside their doors. 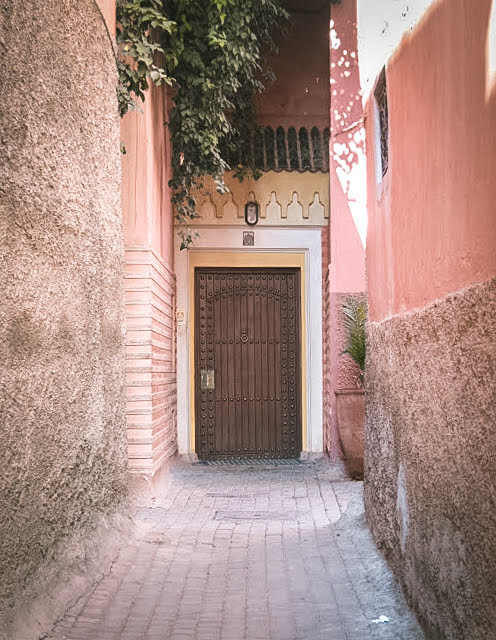 Entrance to Riad Al Moussika. Morocco hides its secrets well – who can imagine the beauty that lies behind this door?

A typical courtyard in a riad would have a fountain in the center, surrounded by orange trees.
In the riad that we stayed in Marrakesh, it has 3 courtyards – one of which even has a swimming pool. 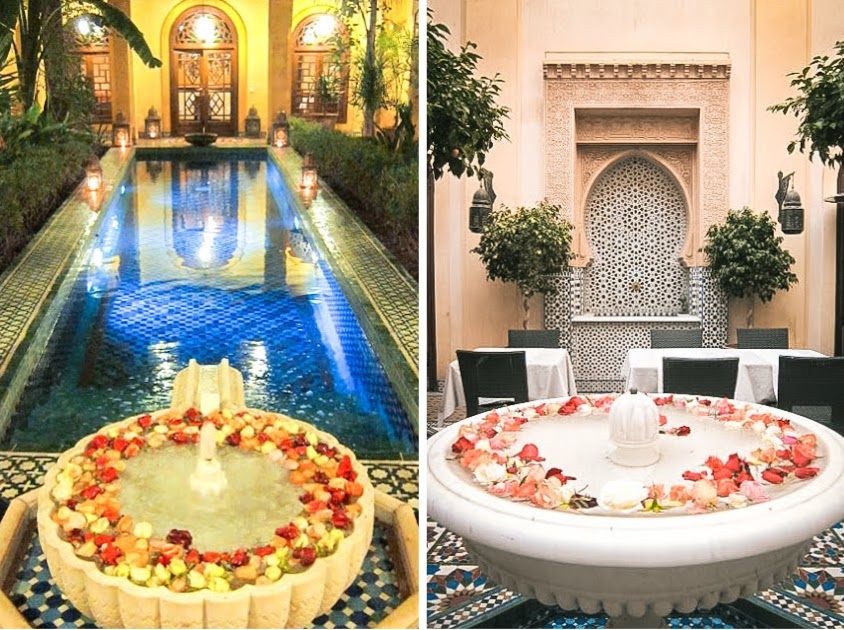 The swimming pool and fountains inside the riad. 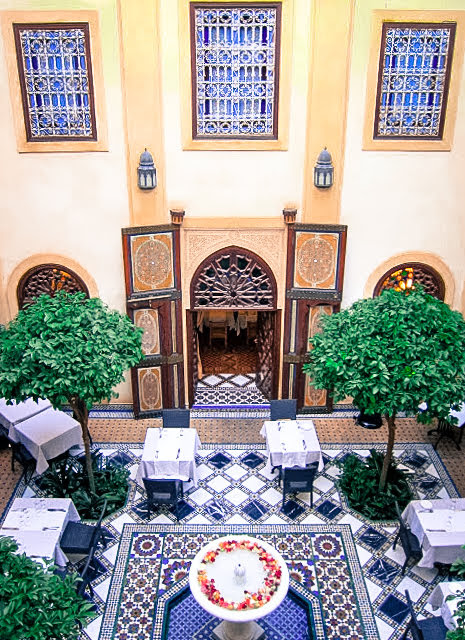 Typical courtyard inside a riad

Another characteristic of a riad is the few rooms that it has. Our riad in Marrakesh, for example, only has 5 rooms. This allows individual attention from the owners and the staff – by the end of our stay I think we’ve met every single one of them.

Why stay in a riad in Morocco?

Because it’s like staying in a palace. In our case, our riad was a palace. Riad Al Moussika, our riad in Marrakech, belonged to a Berber warlord, Thami El Glaoui (there’s even a book written about him), who built the riad as a palace for one of his 100 wives.

Well, officially he only had 8 wives, but he had non-official wives as well. It was definitely a different time back then. 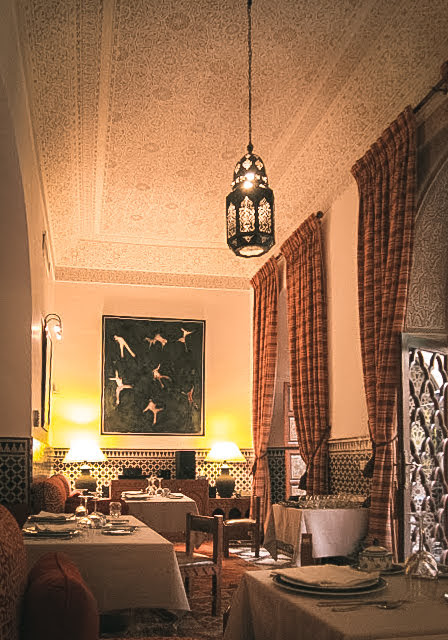 After the craziness of the souks and medina of Marrakech, there was nothing like stepping into the tranquil coccoon of our riad. The thick wall (and lack of windows) help isolate the noise. I’m typing this right now listening to the trickle of fountain in the courtyard and birds chirping while just minutes ago I was almost run over by a Vespa and stepped on by a donkey (not at the same time, fortunately). 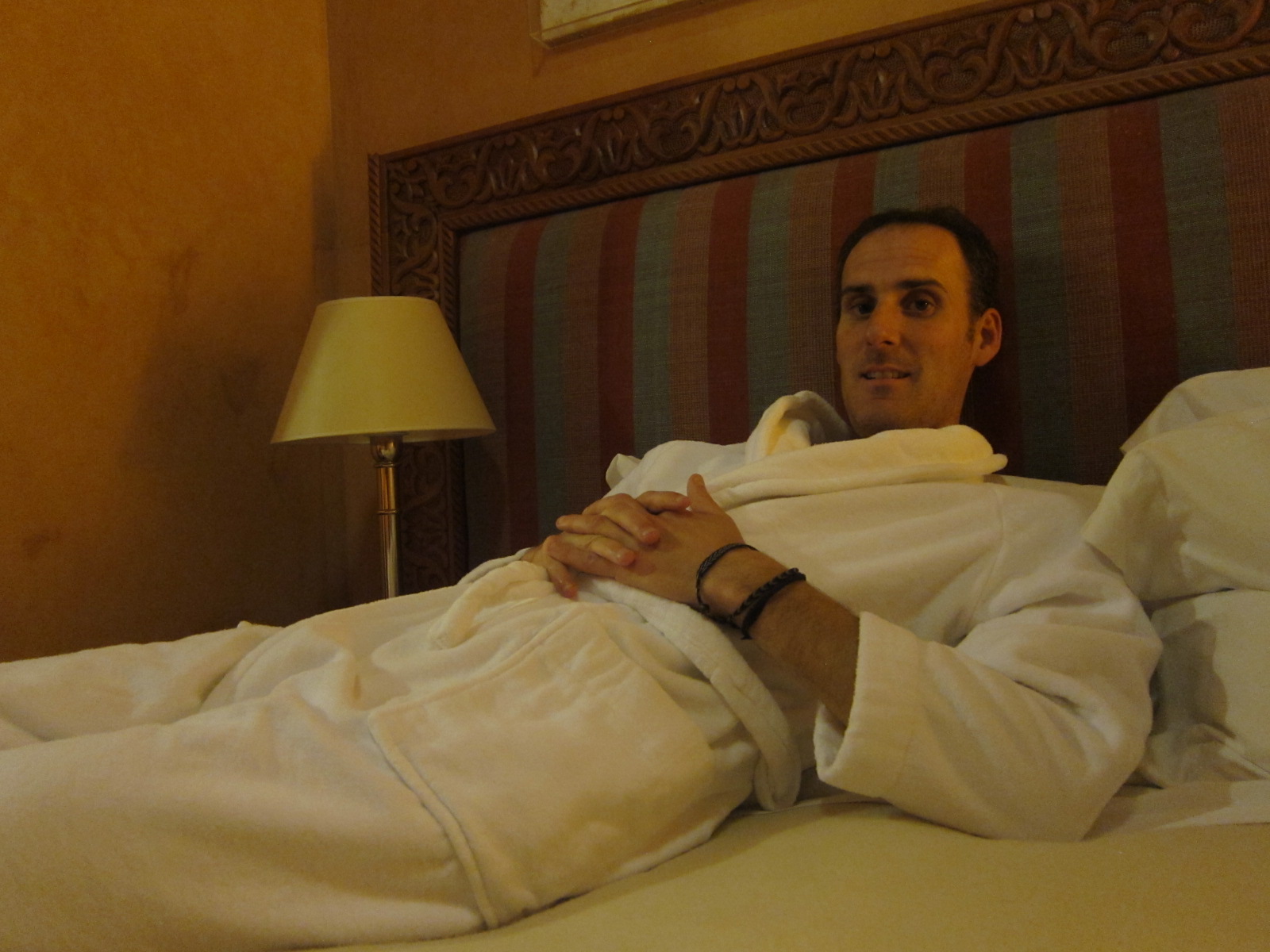 Jack lounging around in his bathrobe

A riad is what your regular boutique hotel wants to be like when it grows up. Each room is individually and richly decorated. Often that means hand-carved doorways and hand-painted doors and shutters. One room might have a private terrace, another might have a jacuzzi. You definitely won’t see none of that cookie cutter Holiday Inn hotel rooms. 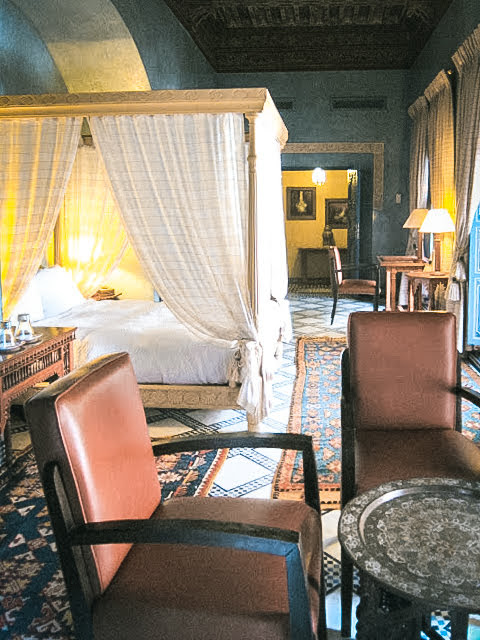 Our room in Riad Al Moussika 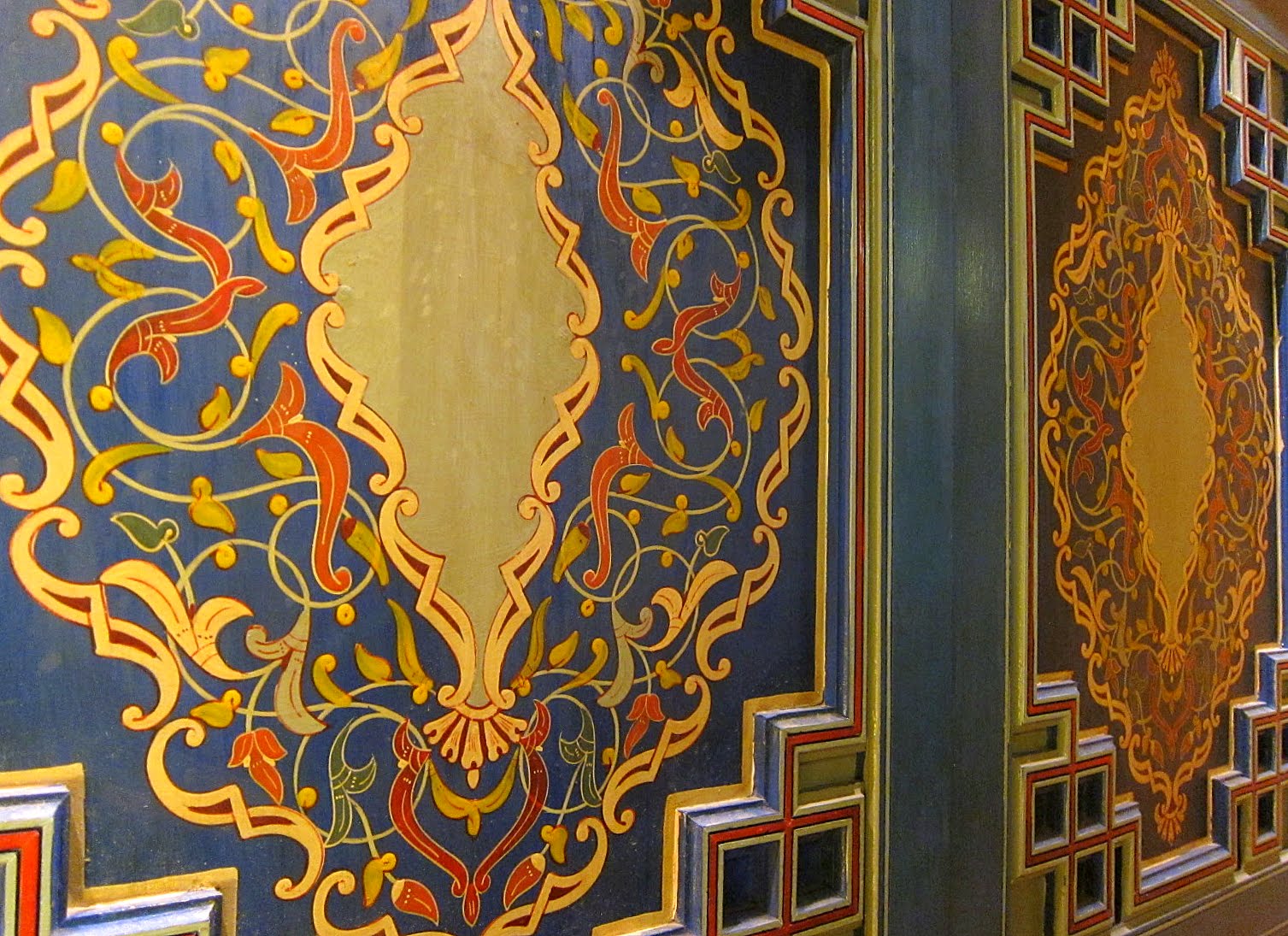 Another reason to stay in a riad? The food. Most riads are known just as much for their restaurants as well as their beauty. This is especially true for Pepenero, the inhouse restaurant of our riad. We had food so good there we almost cried.

The only reason NOT to stay in a riad?

The cost. Staying in a Moroccan riad is not cheap. With only a few rooms and the constant upkeep that a riad demands, staying in a riad is not quite what one would call a budget accommodation. Having said that, it’s still cheaper compared to what one would pay for a boutique hotel in San Francisco. 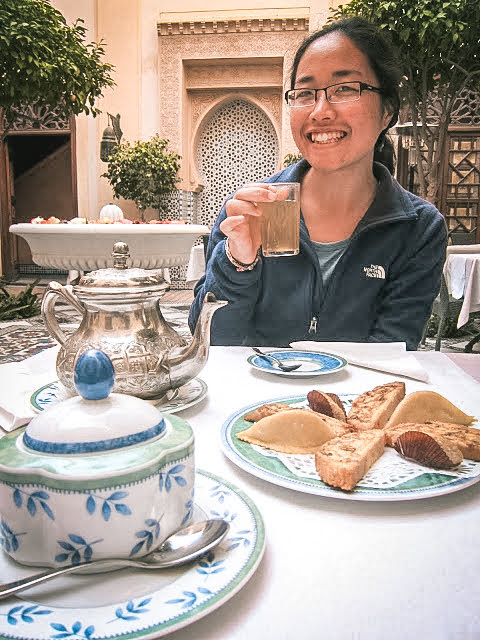 Tea time at the riad

Should You Stay in a Riad in Morocco?

If you can afford it, I don’t think you’ll regret it. Staying in a riad was definitely one of the highlights of our stay in Morocco. Just be careful. We were so amazed by the beauty of our riad and so pampered by the attention that the staff gave us – it will be really hard to go back to $15/night hostel rooms.

Where we stayed in Marrackech:
All pictures are taken from Riyad Al Moussika (rated “Exceptional” on Hotels Combined), rooms from $160/night. Even if you don’t stay there, Pepenero (the restaurant) is worth a visit. Entree starts from 120 Dirham.