One of things I was most looking forward to on our visit to Morocco was exploring its famous souks. I’ve seen pictures and they always seemed so exotic. So foreign! People in strange dresses and stores selling strange things. I knew right away I’d love them. I’m glad to say that Moroccan souks managed to live up to a pretty high expectation.

A souk is the part of the medina (old town) of an Arab city where most of the stores congregate. A market if you will. It’s often informally divided into sections based on what’s being sold: leather goods, Berber traditional medicines, so on and so forth.

They’re almost always crowded, almost always run by men, and they’re always fun to explore. Each souk has its own personality and I got along with some of them better than the others. The funnest souk I went to in Morocco was in Fes. Followed by Marrakech, than Essaouira.

Marrakech souk feels more ‘airy’ – it has wider alleys and more tourists clogging them. It feels less threatening. The merchants ignore you more in Marrakech which makes window shopping in Marrakech a less-stressful affair. Relatively speaking. 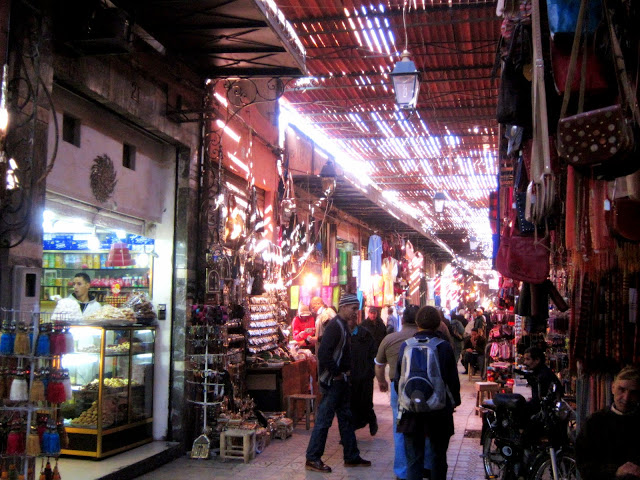 The entrance to the Moroccan souk

While Marrakech’s is deservedly popular, my heart belongs to crazy Fes. Fes and its maze of alleys, so narrow that at any given time the buildings around them cast a shadow over the cobbled lanes. 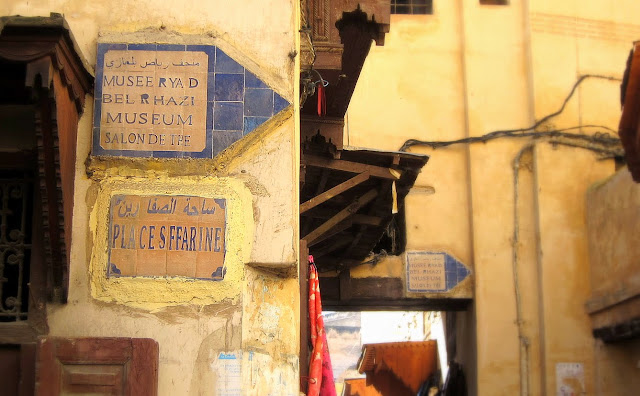 I love Fes because it’s everything I imagined Morocco to be: chaotic and overwhelming. Bright colors, weird smells, and foreign sounds. Skinned goat carcasses and camel heads. Donkey poo and urine stench.

Maybe it’s not so much I like Fes better, but Fes being the more memorable of any other souks we visited. It surely gave a whopping punch of first impression. 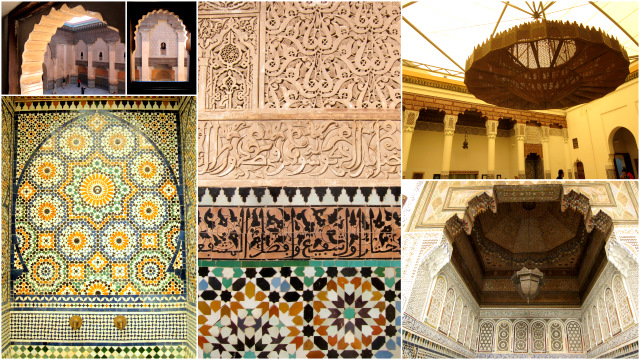 My favorite type of store to oggle and photograph in a souk is the leather slipper (or babouches) stores (by the way, don’t miss out on the tannery in Fes!). Arrays of brightly dyed sandals glimmer and sparkle under a dim lightbulb. Some can be quite detailed in its designs. I didn’t get any and I’m kind of regretting it right now. They’d make great souvenirs.

Not to mention they’re so purrrty! 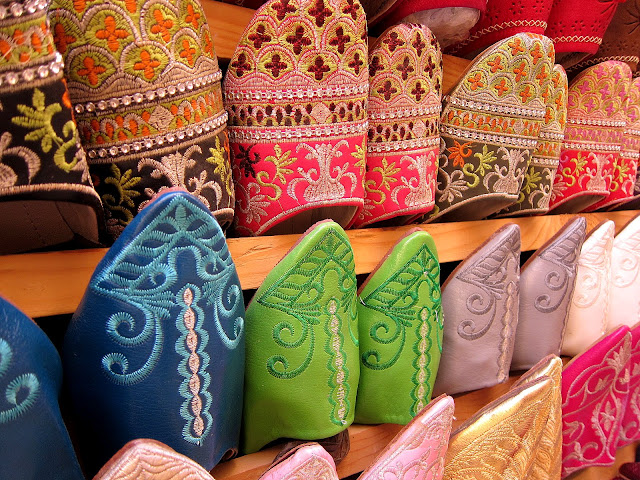 Leather shoes at the souk in Fes, Morocco

Shopping in a Moroccan souk

Shopping wise, going shopping in Morocco can be an amusing experience. How can one not be amused when an opening price of 100 Dirham ended up in a final price of 12? All in about 30 seconds of haggling?

Haggling is an extreme sports for these Moroccan merchants. At least that’s what it seemed like. They like to start with as ridiculous of a price as they can get away with. Whatever else you do, just laugh at whatever price they first tell you and aim for 1/4 to 1/5 of that. The shock on their face is a well-practiced reaction.

Shopping in Morocco is not for the faint of heart, I’m telling you.

Tip on haggling in Morocco

One tip is take note if other stores sell the same item you’re interested in (most likely they will), and use the first store to get a gauge at how low they’re willing to go. All you have to do is walk away and they’ll quickly shout back a lower and lower price. 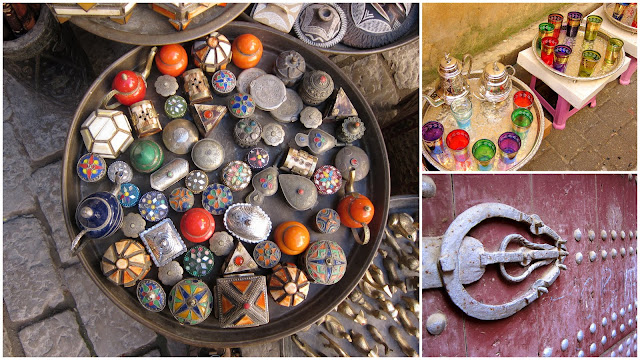 I’ve heard stories about people being overwhelmed and frustrated when navigating Moroccan souks (to the point they just pack up and leave the very same day). I can so totally see that happening. People call out to you all the time and they often don’t take ‘no’ for an answer. Not the first ‘no’, nor the second or third.

But don’t let these stories scare you. I was terrified to step foot past the main gate of Fes only to feel mildly disappointed that nobody paid us any attention. No carpet sellers tried (too hard) to get us to buy their carpets. No mint tea offered. Wth?

Having said that, we still found Morocco to be an exhausting country to travel. We were told that Moroccan touts have calmed down a bit in the past years. We find it hard to imagine what it must’ve been like years ago. 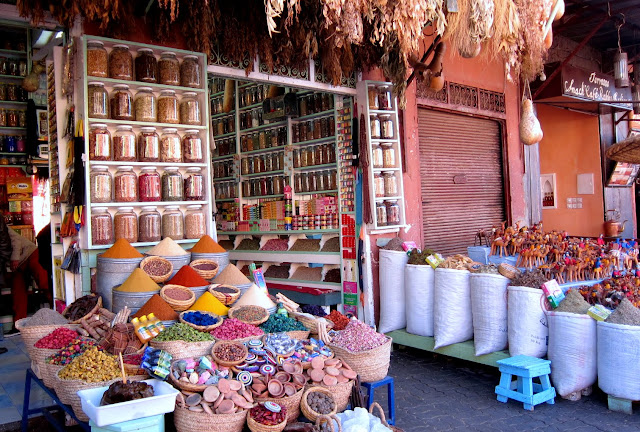 Ease yourself to it. The souk in Rabat and Essaouira are relatively laid back compared to Marrakech and Fes. So start there. While between Marrakech and Fes, the latter definitely has the higher ‘crazy’ factor.

Ask before taking pictures of displayed merchandise. Surprisingly about 1 in 4 people would actually NOT allow you to take pictures – either of themselves or of their goods. So, always ask and if they say ‘no’, smile and walk away.

If you get lost, ask someone who has a ‘job’ – someone working in a restaurant, a store owner, or a woman (not to be sexist, but Moroccan women always seem so busy they probably won’t have time to try to mislead you).

Stay in a riad. Many of these old palaces with inner gardes or courtyards have been converted into boutique hotels. It was such a nice feeling to end a hectic day in a private and quiet comfort of a beautiful courtyard.

If pressured to offer a price for something you innocently pick up but not necessarily want – screaming “Name your price! What’s your budget?! TELL ME!!” while blocking the entrance – as happened to me in Marrakech, just name something ridiculously low. So low that he’ll most likely get offended and shoo you away from the store. Offer him something close to reasonable, and you’ll most likely walk out with an item you don’t really want.

But more importantly, don’t feel pressured to like the experience. When it gets too much, go back to your hotel to take a breather, hang out at a restaurant to people watch, or go check out the local hammam. Morocco is so much more than the souks of Marrakech and Fes.

—
I love markets and I make a point of visiting the main market in every city, but there’s nothing that can prepare you for these Moroccan souks. I think it’s the closest thing to a true adventure in an urban setting.

Arm yourself with a healthy sense of humor and resilience, and be prepared to be charmed and exhausted at the end of the day.

How do you think you’ll like a Moroccan souk? Threatening or intriguing?

Life update: we moved to Colorado! After calling C