I had wanted to do a roadtrip through the Southwest for a long time but I have been unable to convince any of my friends to go with me. Most cited life or work obligations as the reason. Others were simply uninterested. I know this made me sound like I had really lame friends, which is not true. My friends are awesome and I’m sure they love me dearly – they just don’t love the idea of being cooped up in a car for many hours on end with me. (I still love you guys).

If this had been any other occasion I’d have had packed my bag and gone on my own. But long roadtrips is different. To be honest, I find long road trips intimidating.

So where does a desperate person go to find travel mates? Thorn Tree, of course. And that was how I found these 2 strangers who are just as desperate as I am. Mark is a laid back 20 something waiter from an tiny Greek island. Carrie decided to escape life in France traveling while in-between office jobs. She was fiercely independent, the organized one of the group, and the only one who brought an MP3 player. She really, really liked Katie Perry and Pink. It could’ve been worse, I guess.

One common uniting goal that we share? To see as much as of USA as possible. 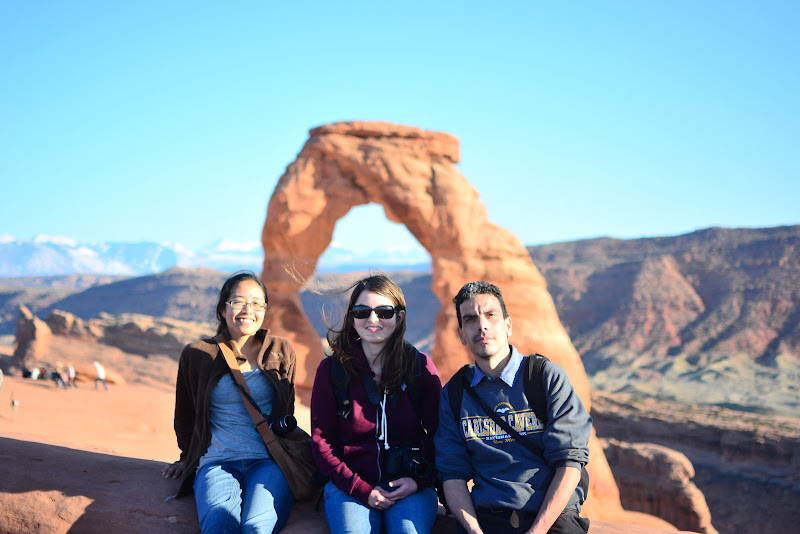 Me, Carrie, and Mark

I don’t mind the idea of traveling with complete strangers.

MORE: Some People Just Don’t Know How to Treat Strangers

Long road trips test relationships – the whole being 24/7 in a confined space thing brings out the worst in people. But I’ve noticed that we tend to be more civilized in front of strangers – don’t you agree? Friends or couples who travel together always have a risk of ending up as strangers. But if you’re strangers to begin with? It can only get better right?

Here are some tidbits and snippets from our road trip across the Southwest:

The trip started in Austin, Texas and ended in Las Vegas. We quickly fell into a routine: drive for a couple of hours, go for a hike during the afternoon, drive a couple more hours. Once we were out of Texas, the distance between places of interest shrank considerably. I’d say that every day we drove about 4-6 hours total.

I lucked out with these 2 as they like to hike as much as I do. We hiked so much and ate so little that I actually lost weight! A first in road trip history I think.

We had such different taste in food that we’d go on our own separate ways to look for food and meet back at our hotel room to eat together: me and my pizza, Carrie and her salad, Mark and his package of Oreos.

Mark lived off Oreos. And steak. But mostly Oreos.

The first day of our trip we bought a basil plant and we named him, appropriately, ‘Basil’. Basil became our unofficial trip’s mascot and we babied the heck out of that potted plant. We lost Basil somewhere in Utah – after too many of its leaves ended up in our sandwiches. 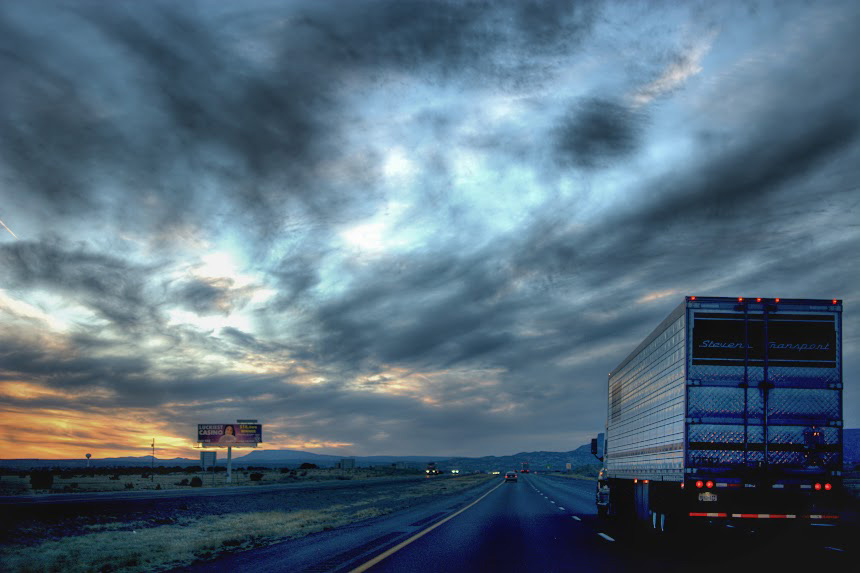 The scariest moment of the roadtrip was when we almost got into a T-bone car crash somewhere in Texas. Afterwards I felt the need to explain to my European buddies the subtleties of American driving. Like what “Left turn yield on green” means.

My biggest fear coming into the trip was that my 2 fellow road trippers would be horrible, reckless drivers.

Well, it sort of backfired. Mark and Carrie were the slowest drivers I’d ever met, always driving well below the speed limit. It was driving me INSANE. So I tried to make up for lost time when it was my turn to drive. One time I noticed Carrie’s pale knuckles as I was going 100 mph trying to pass as semi and I realised:

OMG, I’m the reckless driver in the group. 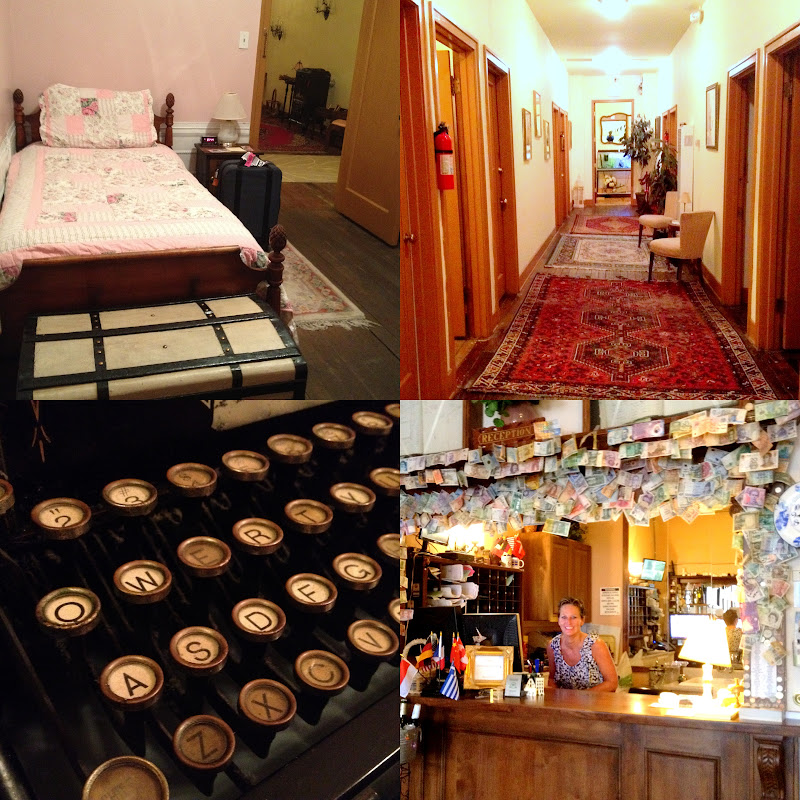 The awesome Grand Canyon Hotel in Williams, AZ on Route66

Because I’m an introvert by nature, when we got to Arizona I needed a break from the ‘togetherness’. I decided to splurge on a private room in The Grand Canyon Hotel.

It was the best decision. Not only did I get to recharge, but the hotel was totally adorable – a renovated old building located on Route 66 filled with antiques and memorabilia from that golden era of road trips

I highly recommend this hotel (and the town, Williams – AZ) if you’re ever around Grand Canyon. 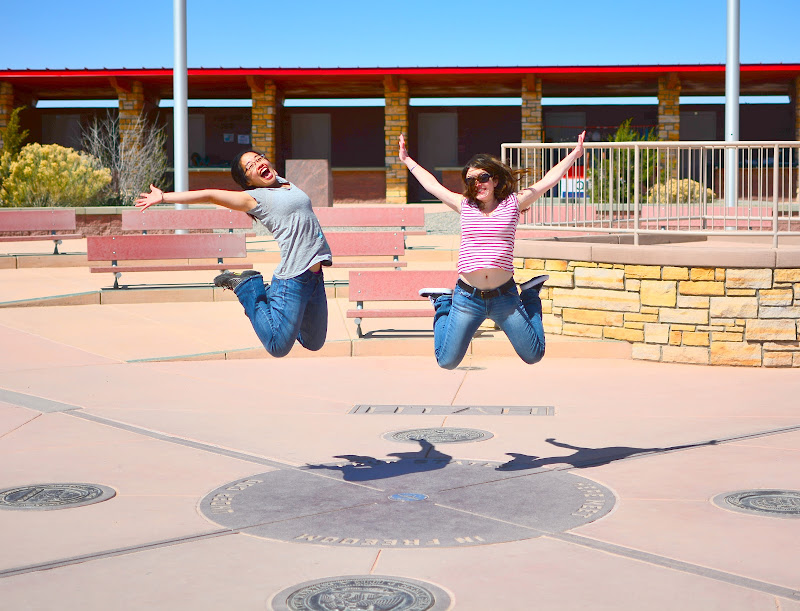 You’re at the point where 4 states meet, what do you do? Well, jump of course.

I honestly expected a lot more dramas and foibles during our trip. Amazingly our interests, priorities, and budget overlapped enough that this motley group worked out well. Traveling with strangers can be a crapshoot sometimes, but I got really lucky in this case.

So 3000+ miles and 7 states later we said good bye in Vegas. I flew back to San Francisco while the others went on their own ways to continue their travel.

These 2 strangers and I have gotten to know facts about each other that our own friends and families might not: juicy relationship tidbits, personal insecurities, family dramas, and bathroom habits.

My travels have brought many of these short but personal relationships into my life. There are people out there in the world with whom I’ve shared some of my life’s most memorable moments that I’ll never, ever see again. It’s very enriching and bittersweet at the same time, do you know what I mean?

Anyway, I can’t wait to share with you guys more stories and pictures from this awesome trip (especially the pictures from Antelope Canyon that will BLOW your mind) – keep an eye out for the following weeks.

Do you have any travel with strangers story to share? 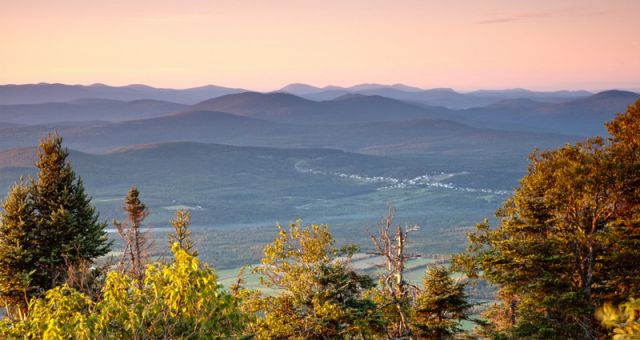 The Why, How Much, and Other Difficult Questions About Living in A Van Full Time