Great Basin NP is one of the least visited parks in the US Park system. Part of the reason is its remoteness. It’s 4.5 hour drive from either Las Vegas or Salt Lake City with not much in between.

The week before my birthday, I decided to fly to Salt Lake City and go on a roadtrip to Great Basin National Park (my 39th!). As one of the least visited national parks, Great Basin sounded exactly what I was looking for. I love the fact that more and more people are getting outdoors, but some of my favorite outdoor places started to feel a little crowded this year. 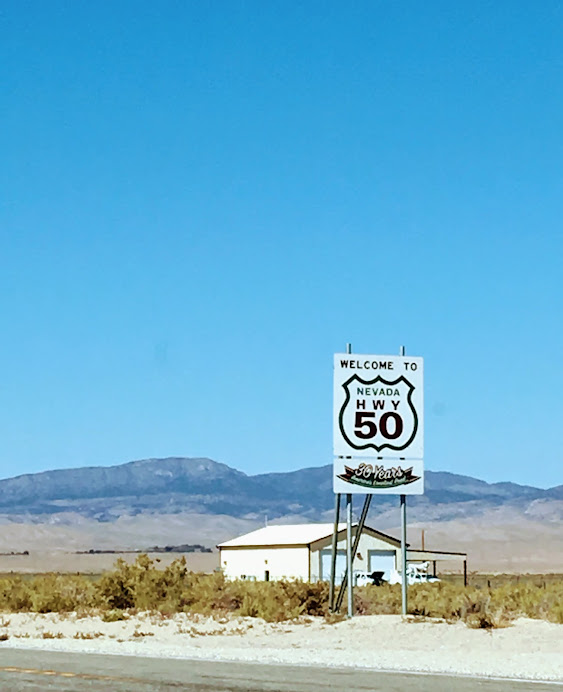 Except here on Highway 50, the loneliest road in America 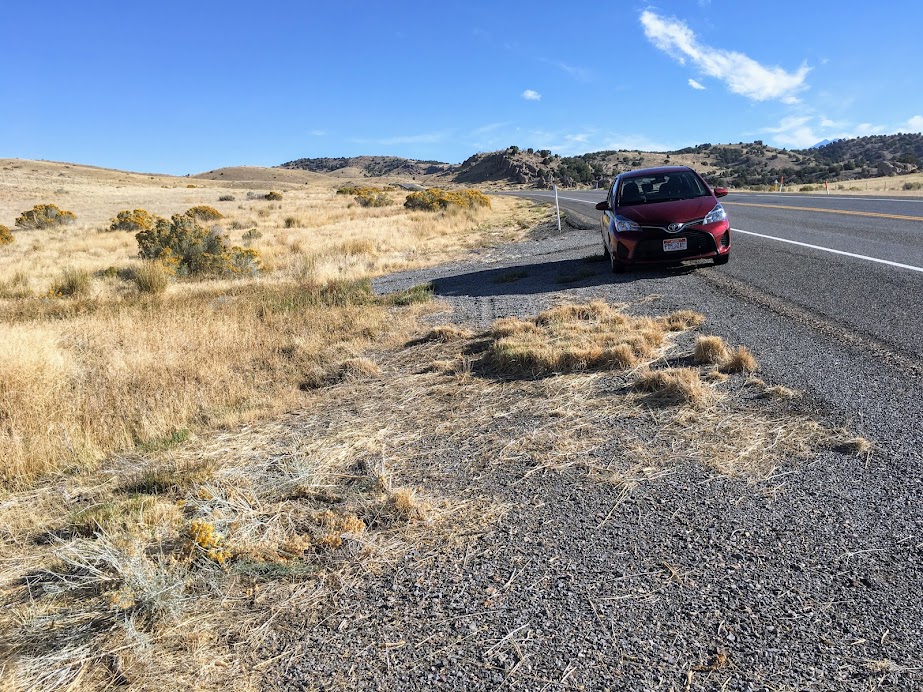 There were long stretches where I didn’t see anybody else. I loved it! 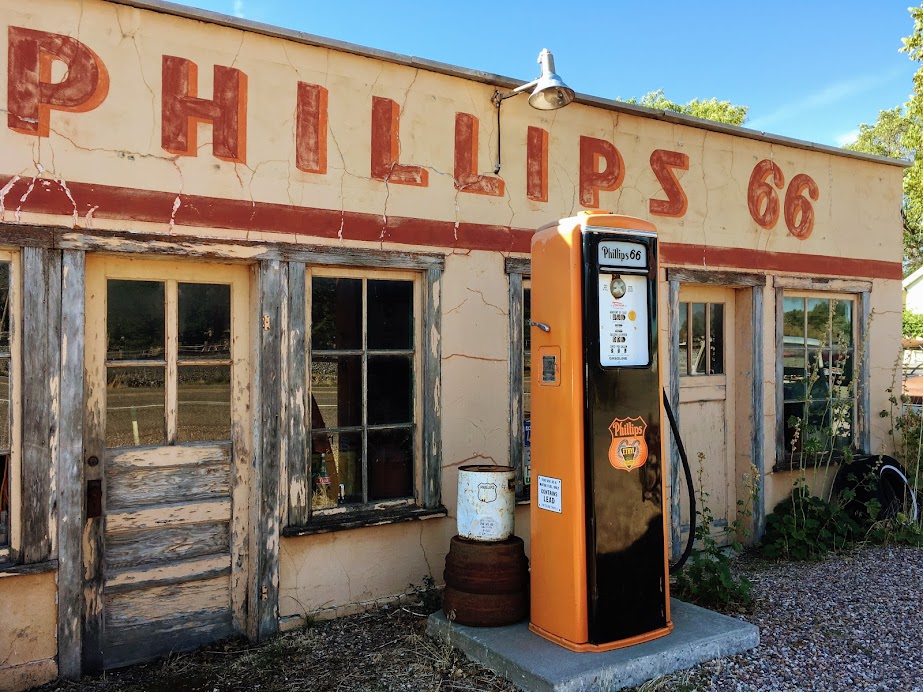 Somewhere on the road to Great Basin NP 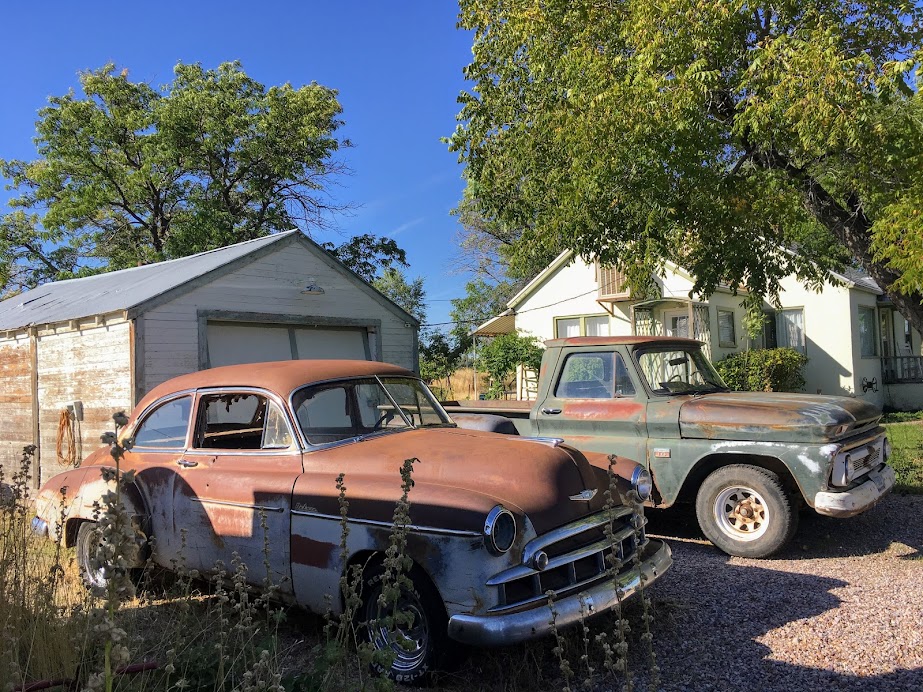 I stop for random old stuff along the road. 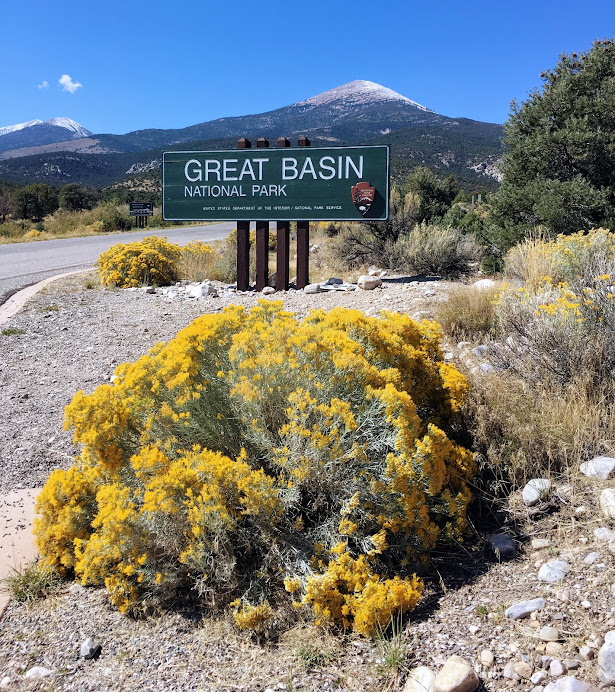 Made it after a non-eventful 4 hour drive from Salt Lake City! 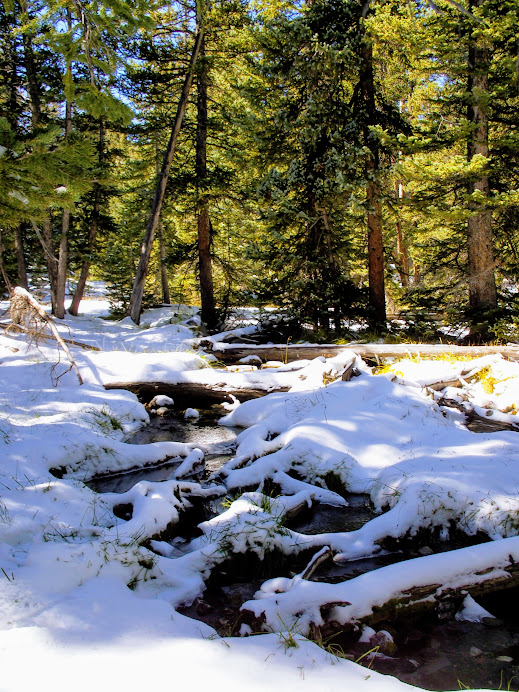 Winter is just around the corner 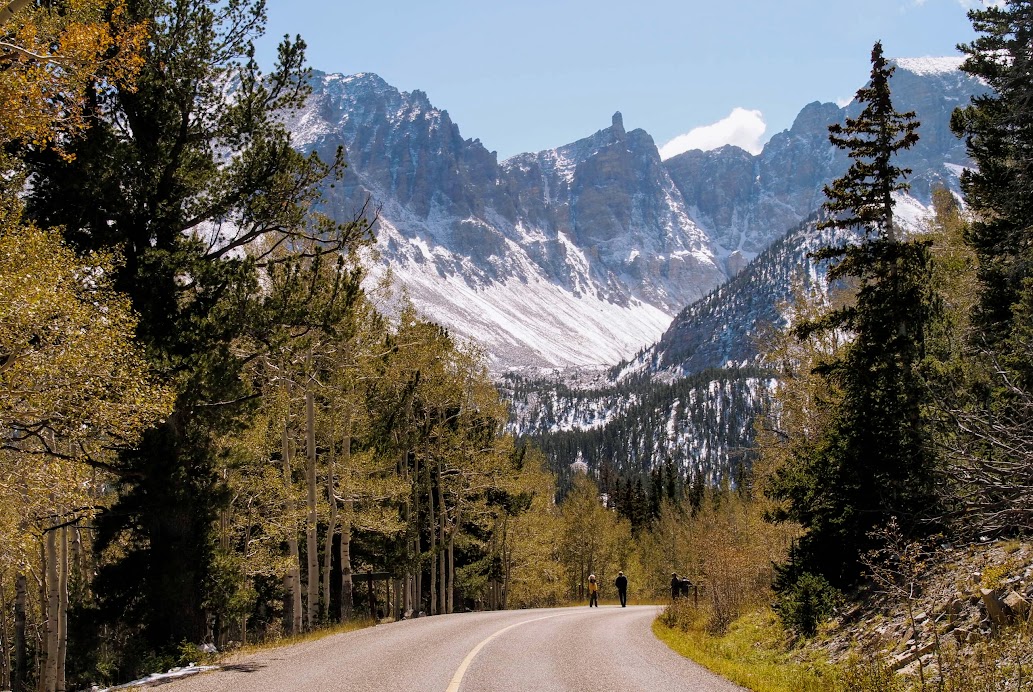 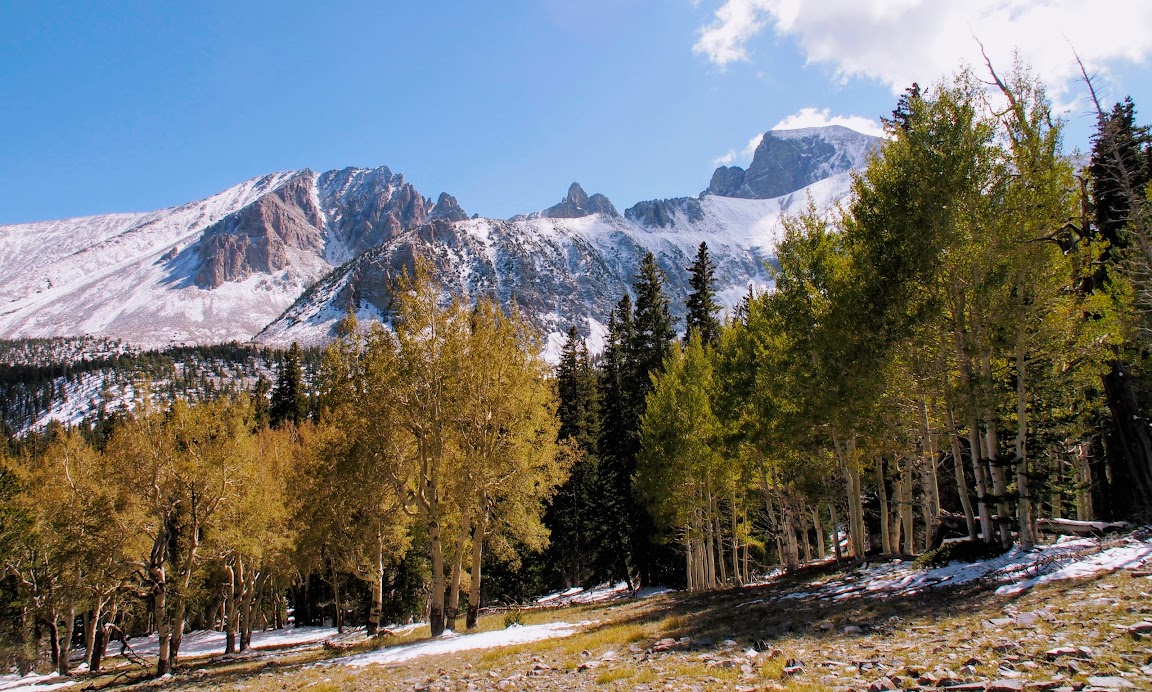 Great Basin National Park preserves a tiny part, and I’d like to think the most special, part of the Great Basin region. It’s a region bounded by the Wasatch Range (that’s the mountain range you see around Salt Lake City) and the Sierra Nevada in California. Most of Nevada lies within this “basin”, a geographical term to define an area where no surface water can reach the ocean. Any water here either sinks underground, evaporates, or drains into a lake.

When I got there, I was surprised at how much GBNP reminded me of California’s Sierra Nevada. I felt immediately at home there among the pine trees and alpine lakes.

What to do in Great Basin National Park

Lehman Cave is one of the most richly decorated limestones caves I’ve ever been to. Even though the park contains over 40 cave systems, Lehman Cave is the only one that’s open to the public. Taking a guided tour is the only way to see the cave. It costs $10 and a reservation is recommended. There are 2 tours, the Grand Palace tour is longer and covers more rooms. I highly recommend it even if you’ve been to other famous caves before.

In Great Basin, a 3 mile round trip hike from Wheeler Peak Campground takes you to the most accessible bristlecone pine grove in the park. Bristlecone Pines are some of the oldest living things on earth. One of the keys to their longetivity is their slow growth that results in very dense wood. This makes them resistance to rot, fungi, and insects. I never refuse a chance to see these remarkable trees. It’s hard not to be humbled in their presence. And they’re fun to take pictures of too.

Pro tip: if you’re ever in Eastern California, check out the Ancient Bristlecone Pine Forest in White Mountains near Bishop to see “Methuselah”, a 4500 year old tree.

At 13000 ft and 8.6 mile roundtrip hike, this peak is quite a serious undertaking. In summertime, watch out for afternoon thunderstorms. Early start is recommended for this reason. If you’re acclimatized, the hike should take 2-2.5 hrs to the peak.

In 2016, the park was designated an International Dark Sky Park as it boasts some of the darkest night skies left in the United States. The park holds an annual astronomy festival and regular astronomy programs to take advantage of this fact. 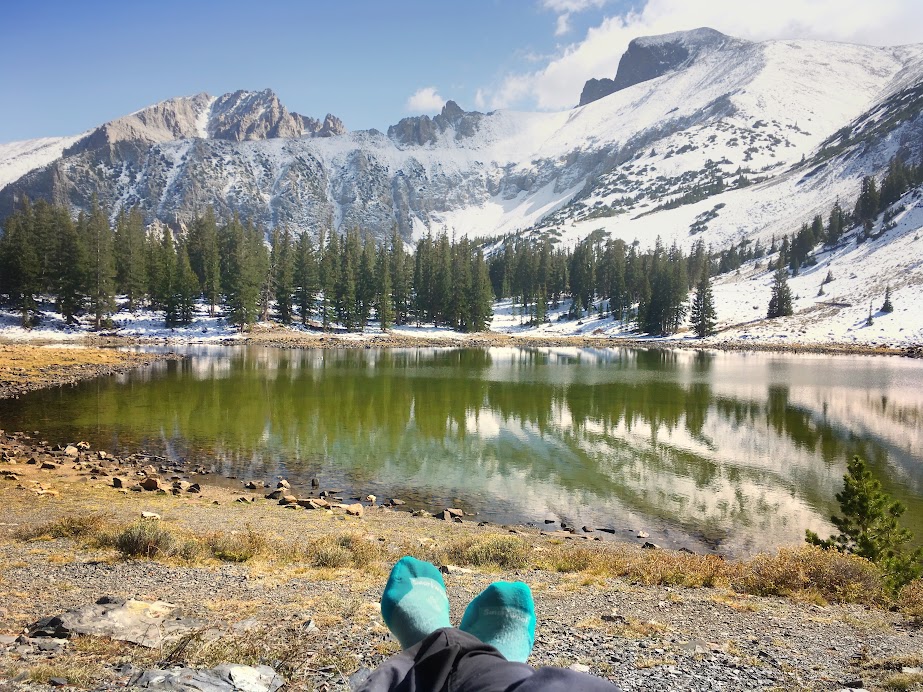 Stella Lake, one of the 2 alpine lakes in the Great Basin 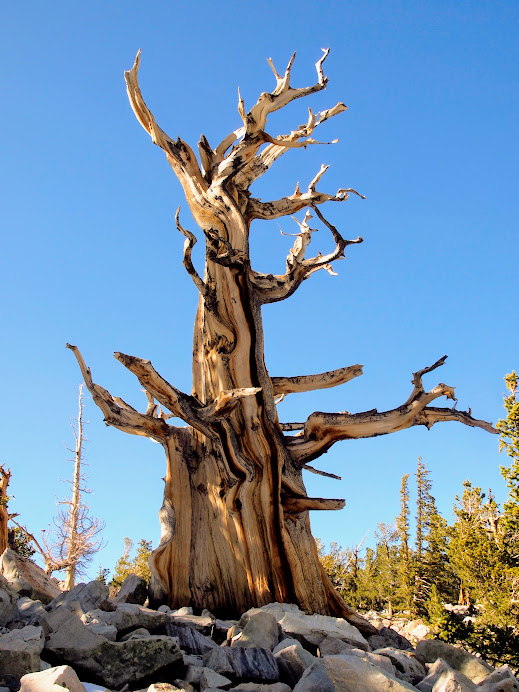 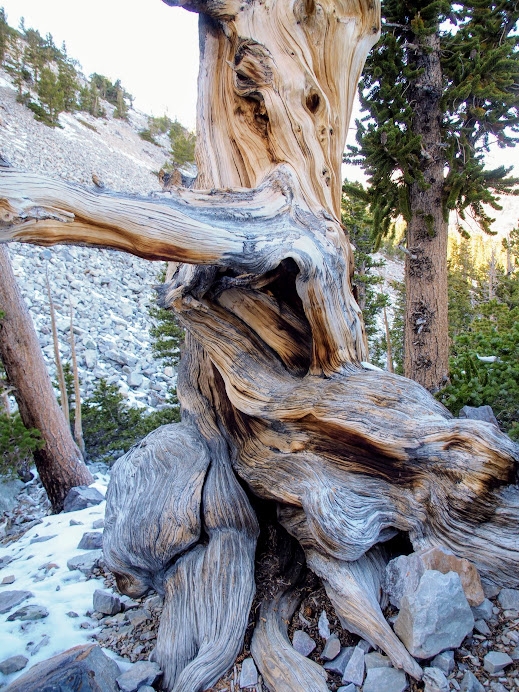 All that gnarly twisty trunk, so cool! 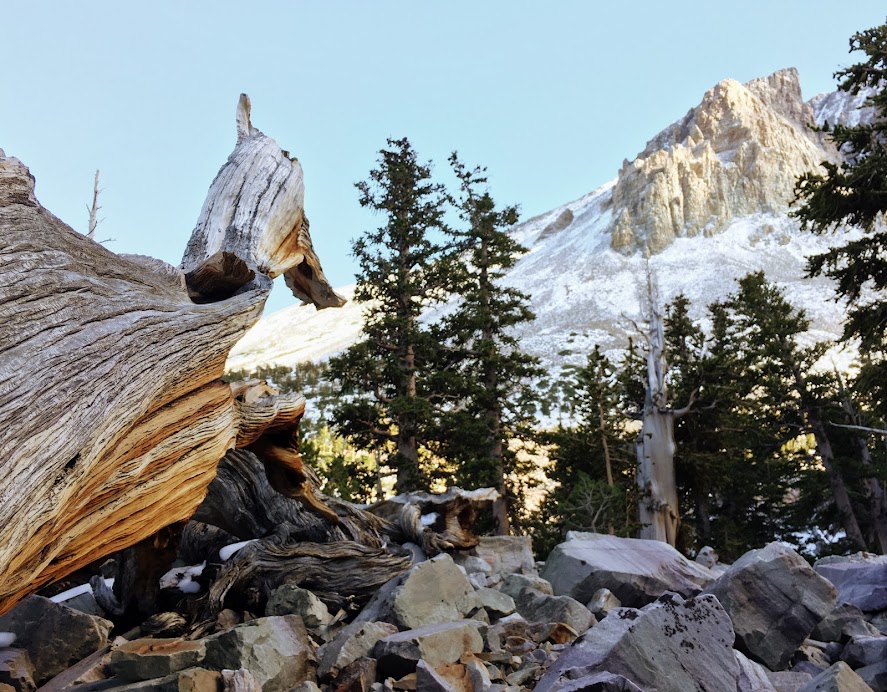 Because of their sturdiness, many bristlecone pine trees still stand on their roots centuries after their death. 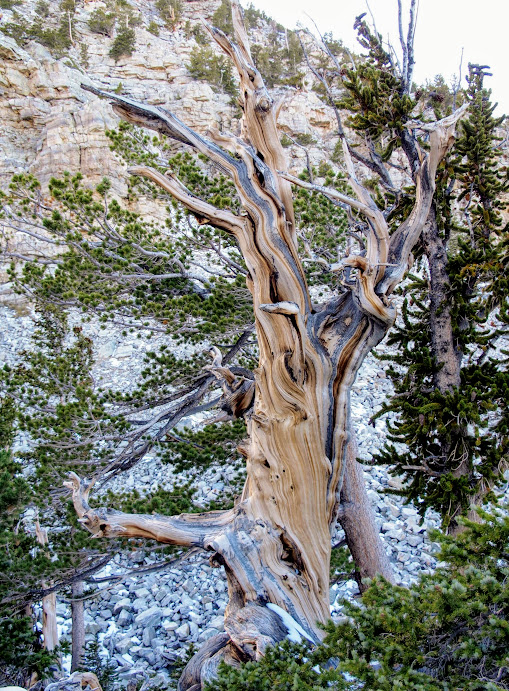 I just realised that most of my pictures are of dead Bristlecone Pine trees. I swear there are lives ones out here too!

Camping
I wanted to stay in Wheeler Peak Campground but it was already closed for the season. A park ranger I talked to recommended Baker Creek Campground instead. This turned out to be one of the best campgrounds I’ve been to lately because it has everything I look for in a campsite: spacious and private space with level picnic table and strategically placed water sources and bathrooms.

Non-camping
Stargazer Inn is the nearest motel to the park. It’s located in Baker, a tiny town outside the park boundary.

There’s a cafe attached to the Lehman Cave Headquarters selling hotdogs, burgers, and cold drinks (closed the days I was there). There are also a couple of cafes and a grocery store in Baker, the nearest town. Don’t expect too much though. If you were camping, I’d stock up in Salt Lake City. 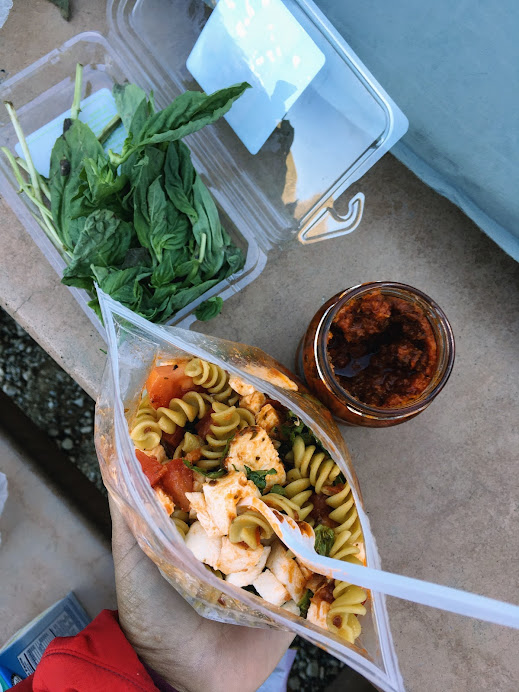 Eating healthy when camping is easy when you have a well-stocked car.

My original plan was to stay in Great Basin for 4 nights, but a ranger mentioned that I should check out Cathedral Gorge, a state park 2.5 hour south of Great Basin NP. I was intrigued. With a name like “Cathedral Gorge”, how can you not? It’ll take me further away from where I need to be, but after some hemm-ing and haw-ing, I packed the car, cranked up the volume, and headed south.

Read about my previous solo road trips to Eastern Canada and Florida Keys. 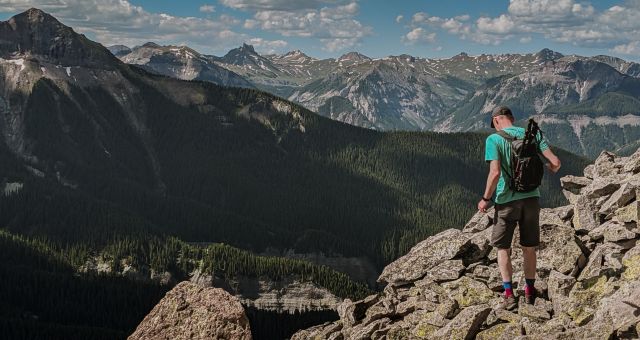