“We arrived in Juneau onboard the Matanuska” At $300 per person for the 3 day journey, getting to Alaska by the state ferry is not the cheapest, nor the fastest way to get from the mainland US to the 49th state.

But for those with the extra time and a sense of adventure, it’s an option worth considering.

Camping on The Deck

When the time came to choose our mode of accommodation, instead of splurging on a cabin we decided to sleep in many of the available public places onboard the ship.

But rumor has it, the best public spot to sleep on an Alaska State Ferry is in the heated solarium on the deck.

Armed with that information, we got to the terminal early and eager to be the first in line.

Tip: If you were one of the first ones to get to the terminal, place your backpack in front of the gate to mark your spot in line.

When we first arrived on the deck

I believe that the solarium was meant to be used as a heated outdoor lounge for ship passengers who would like that feeling of being outdoor, but minus the inconveniences that the outdoor brings.

Inconveniences such as the cold. Thus the rows of overhead heaters above the lounge chairs.

But we, and the rest of the other budget-minded folks overtook the solarium completely, occupying all the lounge chairs and using all the available floor space to put our stuff.

Jack and I managed to get the most primo lounge chairs. They were close enough to the entrance so we could see the view but off the side so we didn’t have people walking all around us.

Tip: Don’t get the deck chairs closest to the entrance. 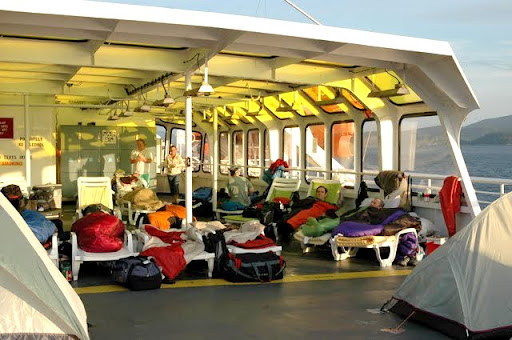 Can you spot Jack?

The not-so lucky ones ended up sleeping in the movie theatre (also another highly coveted space), in the public lounge, or were forced to set up tent on the deck floor.

Duct tape was the hottest commodity for the tent people because there were no other ways to secure the tent from being blown away by the wind.

Tip: Bring your stakes and extra duct tape to spare if you’re thinking of pitching up a tent.

Staying Warm on The Ship

Staying warm on the ship was not a problem. The opposite was quite true, in fact. The overhead heaters were blazing in full force as if they were trying to heat the whole ship. I believe we ended up sleeping outside our sleeping bag some nights because it was so bloody warm.

As for the poor folks in the tents…. well, it rained one night with heavy gusts of wind (this is where the extra duct tape would come in handy).

We symphatize with them from the comfort and warmth of our deck chairs. Usually in the form of making bets with fellow deck-chair loungers which tent was going to be blown off the deck next (fortunately, only one tent got blown off but they managed to capture it).

Tip: This is why you don’t want to get the chairs closest to the entrance. You will get rained on.

Life Onboard The Matanuska

As you can imagine, there was very little privacy on the deck but it was all part of the attraction for us. People were cooking food, playing guitar, reading, and striking up conversations left and right.

When we wanted peace and quiet, all we had to was go to the onboard movie theatre where a cheesey romantic comedy movie was inevitably playing.

But you’ll be missing out on the view. To see these before nodding off to sleep was…

It never got completely dark there, it pretty much stayed like this throughout the night. 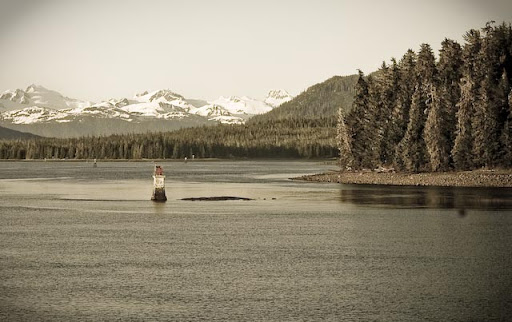 Views from the ship near Wrangell 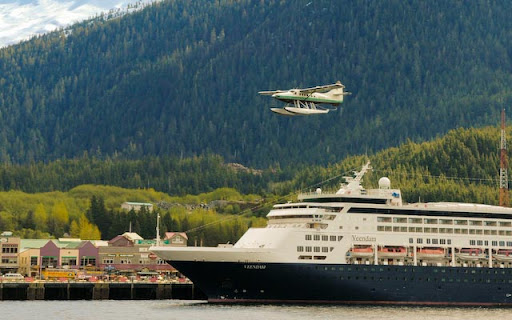 Most of the journey, we saw nothing but vast expanse of water. It didn’t get interesting until the second day or so.

On the morning of the 4th day, we arrived in Juneau and were picked up by our Couchsurfing host. Our Alaskan adventure officially begun and it just kept getting better and better.

Don’t believe us? Check out some of the related posts below.

—
Related posts:
– Up Close and Personal With Mendenhall Glacier, Juneau
– Backpacking Denali: What NOT to Do
– Why Did the Grizzly Cross the Road?

Giron – Where The Locals Told Us To Eat Chinese Food