Giron – Where The Locals Told Us To Eat Chinese Food

We stopped in Giron on our way from Cartagena to San Gil.

San Gil was a mere 2 hours away. But we decided to break the journey after a sleepless night on the nightbus and explore this colonial city, a 15 min drive away by taxi from Bucaramanga bus station.

After checking at Las Nieves, a cute hotel facing the main plaza in Giron, we went out to look for food. It must have been around the time the school was out because there were a lot of kids in school uniform walking around on the streets.

I figured we should enlist their help in finding a cheap, local place to get food.

All it took was a single ‘Hola. Hablas ingles?‘ to one of them and all of sudden we were surrounded by friendly, chattering, kids in uniform eager to know every single thing about us. 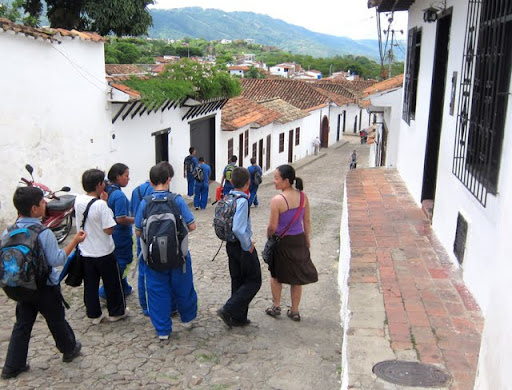 They singled out a shy kid out of the crowd as the best English speaker who didn’t look too pleased to be in the spotlight.

He said thank you after introducing himself! How cute. We started walking together and the barrage of questions started. 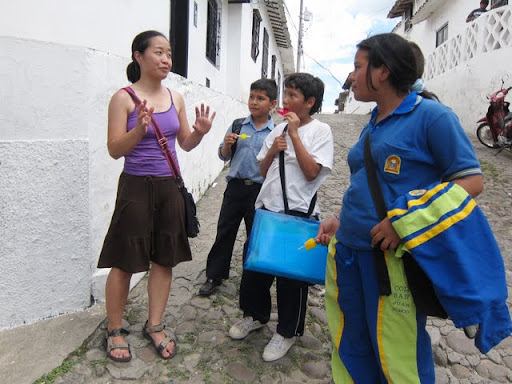 This is when I go, 'Whoa, mas despacio, por favor."

We indicated that we’re looking for food.

They got all excited and gestured that we should follow them. And we did.

So there we were, being led through Giron with its white washed colonel-style buildings, across a park, to the non-colonial part of the town where these kids apparently live in. In the meantime the conversations never ceased.

Sometimes multiple threads would be going on. I’d be talking to a kid about what her parents do (or trying to), and another one would grab me and start pointing at all the snacks on a stand talking slowly as if to a baby, ‘A-re-pas. Con hu-e-vo y queso. Eso es em-pa-na-das.’

Then they indicated that we’ve arrived at the restaurant of their choosing.

We were expecting your usual restaurant selling ‘set lunches’ filled with locals eating their lunch ya? Or something similarly authentic or at the very least, South American.

But we’d never expect them to take us to a Chinese restaurant. 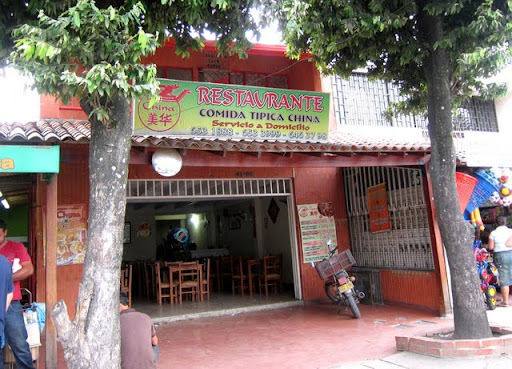 Not really in the mood for Chinese, but hey, we're here. Mounds of Arroz con Camarones. And this is the half size.

Jack and I looked at each other, ‘I can’t believe they took us to a Chinese restaurant. Do you think it’s because I’m Asian?’, I wondered. Jack only shrugged.

Even though eating in a Chinese restaurant was the last thing we had in mind to do in Colombia, it was too late to back out. How could we, these kids looked mighty proud of themselves as if they’d just shown us the lost city of El Dorado.

They even helped us decide on the menu. See, we’ve mentioned somewhat in passing that we liked ‘camarones’ – shrimps. They spoke in rapid Spanish to the propietor and I heard ‘camarones’ mentioned many times. I think they were giving the owner instruction that whatever happened, we had to get our shrimp fix.

And as quick as they gathered, they shouted ‘Ciao’ with a huge smile and disappeared into different alleys towards their homes. Their good deed of the day accomplished.

So the propietor, who I’m sure was slightly confused at being invaded by two gringos and very noisy half a dozen kids, smiled awkwardly at us, pen ready.

Here in Giron, the friendliness of the Colombian people come in pint size. But they’re potent. Sometimes you’ll never know where a single ‘Hola’ would get you.

Where to stay in Giron: I don’t remember the name, but the hotel we stayed was right on the plaza (60000 COP).
How to get there: 15 min taxi from Bucaramanga bus station – 7500 COP
Facebook Twitter Pinterest