We emerged from the night bus bleary eyed in the early dawn – rubbing our eyes from what little sleep we had and trying to fight off the desert cold. The bus soon left us in a deserted road of what we think is Merzouga. 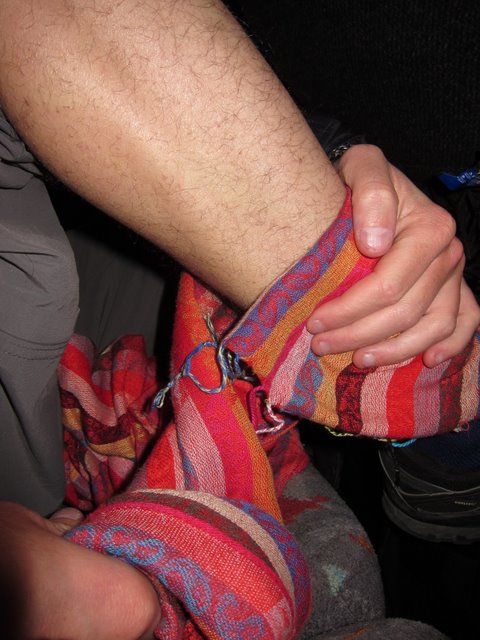 Jack making a makeshift thermal using my scarf on the freezing night bus to Merzouga - one of these days he'll forgive me for showing his leg to the world.

What we could see in the dawn light was mud buildings on a dusty street. ‘Cafe’ was crudely painted on one of them. Everything was closed. I can’t believe I’m actually saying this, but after the cramped alleys of Fez, the open desert horizon was disconcerting.

The touts started making their way towards us:

The camel guide who’s supposed to pick us up wasn’t there. We tried to call him only to find out that the only public phone there takes a special phone card and not coins (what’s up with that?)

was buzzing non-stop around us: to our left, to our right, on our face. Jack was kind of enough to take the brunt of this, chatting all of them up, which gave me time to think of what to do next.

The only other tourists that morning – 2 German girls – were getting into the only car on the street. They asked, ‘We’re going to our hotel, do you guys want to come?’

The only other option was to wait for our guy, Mohammed, to come. Assuming he was coming.
But that would mean being alone with these touts, in a strange deserted city, with no transports to take us away if we want to. So we hurriedly got in the car with them. As we were driving away, I asked the girls how much the fare was. ‘We didn’t ask.’ ‘Seriously?’ They shrugged. ‘It’s not that we have other option.’

The driver ended up wanting 15 Dirhams from each of us. 60 Dirham for what should’ve been a 10-15 Dirham ride km ride was a rip off, even for the desert. Thinking ‘Well, it could’ve been worse,’ and too sleepy and tired to argue we decided to pay without making a fuss.

At one time I believe I actually said, ‘200 Dirham?! Right. Just take us back then!’ – which goes to show how little sleep can addle one’s brain.

He ran in into the hotel to grab the owner – I’m guessing to demand his commission as well as to talk some sense into us. Fortunately, the front door was left open and all four of us ran in with our bags. Securely ensconced inside we felt braver. The German girls delegated the task of bargaining to us – they themselves became spectators of the ensuing back and forth.

We offered him 60 Dirham. Jack was waving our money in front of his face. He refused to take it. Some shouting back and forth ensued in a medley of English, Berber, and Spanish. He seemed to realize that now that we’re at the hotel, there wasn’t much he could do. The hotel owner translated ‘Ok, ok. He said he’d take 100 for all of you.’

‘60 Dirham or none at all’ – the hotel owner barked something in Berber waving our money that the driver finally and reluctantly took. Not without some grumbling and spitting on the ground.

Now Jack and I with the German girls are in the common room with the owner, we told him we don’t have a reservation and would like to see a room.

‘Wait!’ He walked to the kitchen. ‘We should have tea first.’

15 minutes later all four of us were falling asleep with tea cups in our hand – the adrenaline from the altercation with the taxi driver was ebbing away – sipping the tea bit by bit in silence. We were antsy to see the room, bargain for it, and go to bed, but he kept pouring more and more tea!

How much tea can that little pot hold? 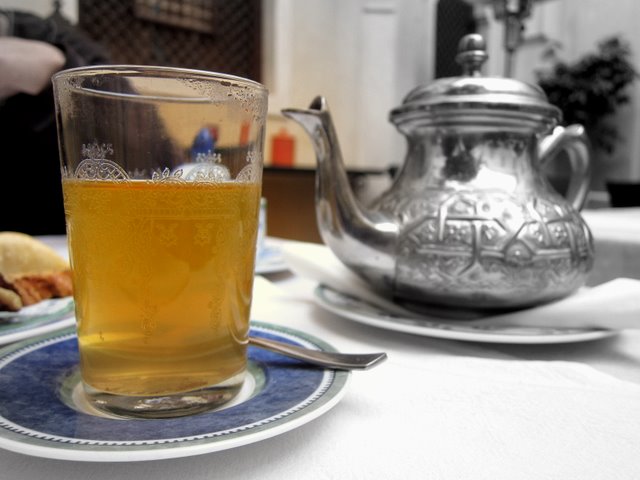 We thought of the sleepless night bus from Fes. It was an experience we don’t wish to repeat anytime soon. Buses in South America seem like a luxury in comparison. Yup, that even includes the buses in Colombia.

Finally after what seemed like ages, the owner got up,
‘Let me show you to your room!’ 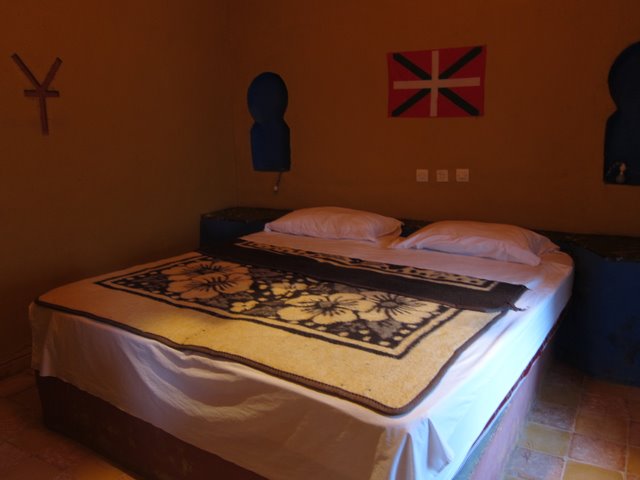 We tried to get him to talk about prices of a camel trek. The thing is, it would be considered inconceivable that we’d stay there without booking the camel trek from them. It’s how they make money, see? But all he kept saying was, ‘You rest first. Later after you wake up, we talk!’

I hate not knowing what I got myself into. But the bed looks mighty inviting. All we wanted to do was lie down – dusty clothes and all.

Well, I guess the desert will wait. The camels will still be there. The negotiation can wait, doubtlessly accompanied by copious amount of sweet tea.

‘Welcome to the desert!’ he shook our hands seconds before we crash into bed.

Traveling to Merzouga to do some camel trekking? Here are some tips for you:
– If you’re coming from Fes by CTM bus, they’ll drop you off at Rissani – a 20 min drive away. Do NOT get into any 4×4 car. Take a grand taxi, which is usually an old Mercedes Benz, and pay the 12 Dirham fee.
– If you’re coming from Fes by Supratours, you can go directly to Merzouga. Be warned that you’ll arrive at 6:30 in the morning. Do not expect any petit-taxis around.
– A better bet is to make a reservation and have your hotel/auberge to pick you up. All of them offer this service.
Facebook Twitter Pinterest