The main reason we came to Arequipa was for the food, typical comida Arequipeña such as ‘rocoto relleno’, ‘chupe de camarones’, ‘chicharrones’ and more. We had never considered ourselves foodies in the slightest bit before we got to Peru. Never before being obsessed with food, I think being away from good food for months in Colombia and Ecuador finally took its toll.

Because now, nothing else mattered except for the pursue of the best ceviche, the best causa, and in Arequipa – the best picanteria (local eateries).

No Colca Canyon for us

The consensus seems to be that the last authentic picanteria in Arequipa is La Capitana. We wanted to try it so bad on our last day in Arequipa we cancelled our tour to Colca Canyon.

Come dinner time we took a taxi, and less than 10 minute later we arrived in front of what seemingly someone’s house in a small alley. The light was out, and the door was locked.

How can it be closed? It’s only 7:30! And we’re leaving for Chile tomorrow.

Lesson #1: Picanterias are usually open during lunch time and close late in the afternoon.

The taxi driver, noticing our disappointment offered to take us somewhere else for dinner.

The taxi driver took us through badly lit and dark alleys

Each one was smaller and more and more deserted than before. Travel warning about Arequipa’s notorious taxi robberies flashed through my head. I knew Jack was thinking of the same thing too. We noticed that the window on the passenger side of the taxi was rolled down. Would it seem rude if I asked him to roll it up?

Just when I was formulating the sentence in Spanish, we burst out from the darkest, scariest, we’re so getting robbed – kind of alley onto a busy and bright street.

We found ourselves right next to a large shopping mall. No causas or rocoto relleno here. Only your typical mall food: pizza, burgers, pasta.

Our first attempt on this quest ended up in a failure. We ate in a chifa (chinese restaurant) that night. It’s Giron, Colombia all over again.

The morning we were supposed to go to Chile we had our stuff packed and were ready to check out. I was sulking because my food wish was not going to happen when Jack said,

“Hey, why don’t we stay another day?”

It might’ve seemed obvious – but to us the idea of staying another day just so that we can eat seems a little, well… pig-gish. Which was not us at all.

But the new us is well, food oriented.

So we cancelled our hostal in Chile and went to La Capitana for lunch. This time, it was opened. And filled to the brim with people. 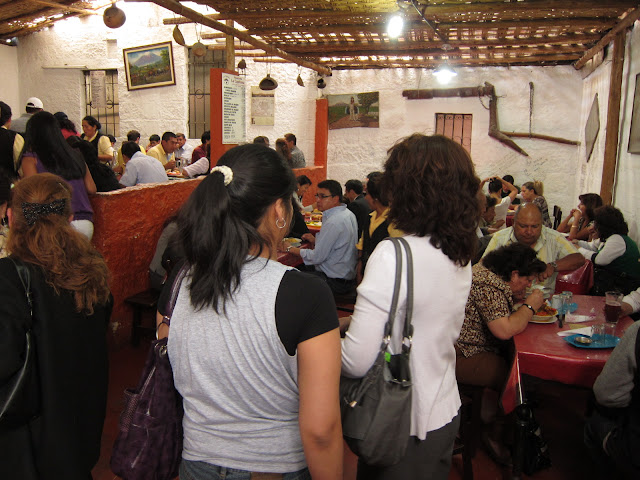 The place was nothing fancy with wooden tables and benches. 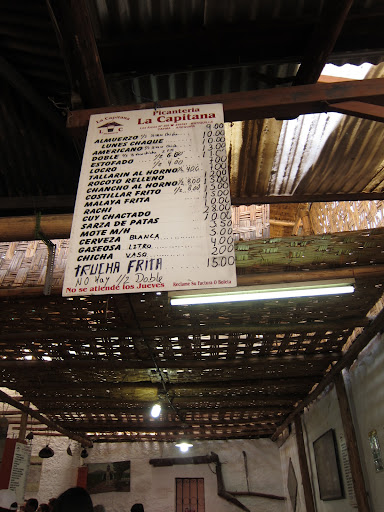 The owner offered us a tour of the kitchen where giant vats of stews, mashed potatoes, and God knows what else were being prepared.

Most of them seemed to contain vast amount of meat.

Lesson #2 – Picanterias are not vegetarian friendly.

Waitresses zoomed past us carrying plates of food, dipping into the vats and slopping big heaps of brown gooey onto large plates. It was chaos.

We ordered a double, which is a sampler of 4 types of appetizers. I mentioned in my best Spanish to bring us anything without meat in it (always a scary thing since ‘meat’ means different thing for different people). 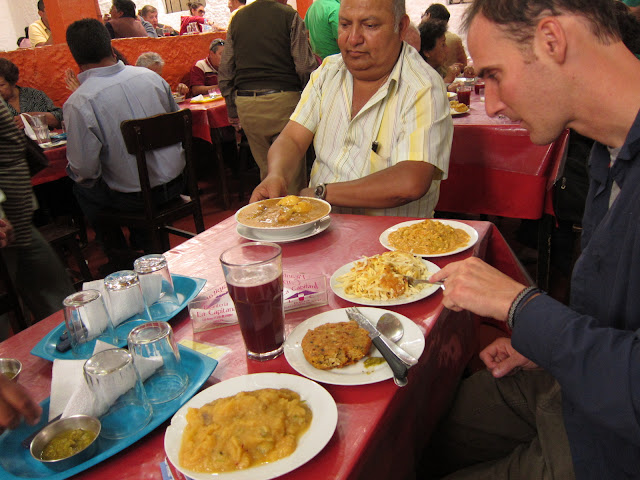 The double at La Capitana - Arequipa

He came back carrying 4 plates that consist of:
– A stew of pumpkin and cheese in a very rich broth.
– Baked spaghetti in a cream sauce.
– Mashed potato slash stew thingy (has hidden meat in it).
– A fried fritter of ? (what I hoped was not meat because I ate it all).

This picanteria took us to a new level of gastronomic confusion.

We had very little idea of what we were eating. It doesn’t matter though.

It was really good and it was really rich. All that cheese and cream and oil and more cheese.

I see now why siesta is a national pastime here. If this is what they have for lunch (and it is – the place was packed and was getting even more crowded as we leave), it will take a body some hours to digest it all.

The couple we were sharing the table with seemed disappointed that we’re not eating the famous rocoto relleno or chicharron. We told them we neither eat beef or pork. They seemed confused – what do you expect from a picanteria?

So in the end, we never really managed to try Arequipa’s rocoto relleno or chicharron – but we’re glad to have been a small part of this town’s food tradition.

Because of that we (and our stomachs) rate this quest a success. Arequipa will always be remembered as the town where food took more priority over sceneries (which we’re pretty big on) and the town where we got to know our inner foodies.

(and Peru will be remembered as the country where our pants got a lot tighter).

How food oriented are you during your travels? 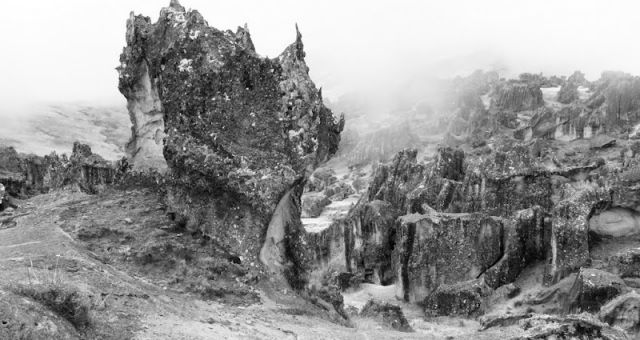